Mexico stunned the World Cup with their 1-0 win over reigning champions Germany in the opening round of Group F fixtures. Thanks to some exceptional counter-attacking play they gave themselves a good chance not only of once again reaching the second round, but of winning the group. However, against South Korea they faced an entirely different type of challenge.

Whereas Germany dominated the ball, South Korea were much happier to sit back and counter Mexico. Thus, Juan Carlos Osorio’s side would have to demonstrate quality in other areas of their game, primarily in possession and in defensive transition.

Having kicked off their own campaign with a disappointing 1-0 defeat to Sweden, South Korea knew that defeat here would essentially put an end to their World Cup hopes. There was, therefore, a lot at stake by the time these two teams met. 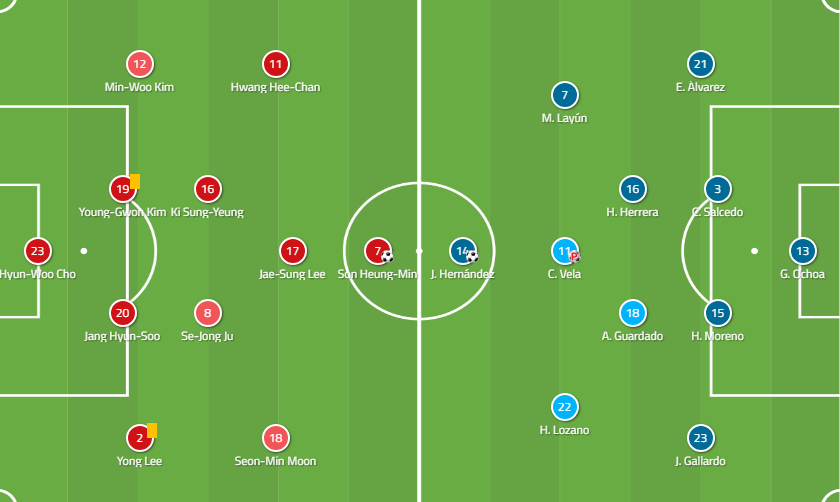 Mexico lined up in a basic 4-2-3-1 formation. Their only change of personnel came in the defensive line, where Edson Alvarez came in on the right-hand side of the back four. Carlos Salcedo moved in from right-back to centre-back to allow for Alvarez’s inclusion, while Hugo Ayala was left out.

South Korea opted for a change of system. Having utilised a 4-5-1 against Sweden, they went with a 4-4-1-1 in this match. Son Heung-min was supported up front initially by Lee Jae-sung, while Ju Se-jong stepped into central midfield alongside Ki Sung-yueng. Elsewhere, Moon Seon-min came in on the wing, enabling Son to take up a more central attacking role, and Kim Min-woo started at left-back in place of the injured Park Joo-ho.

Osorio is renowned for changing tactics from match to match, so it was no real surprise that Mexico’s approach in possession against South Korea was different to their approach against Germany. Here, Osorio instructed his side to form a back three when building up, with right-back Alvarez forming the trident with Salcedo and Hector Moreno while left-back Jesus Gallardo moved further ahead on his flank.

This situational back three – ‘situational’ because it only occurred during build-up; when defending it became a back four – created a 3v2 against South Korea’s front two. As a result, Mexico had numerical superiority at an early stage in their possession, allowing them to play out more safely and effectively.

As well as creating a 3v2, this setup meant that Andres Guardado, who often acted as the deep-lying midfielder, did not have to drop deep between the two centre-backs. Instead, he could station himself behind South Korea’s first line of pressing, often rotating positions with fellow central midfielder Hector Herrera and, occasionally, right winger Miguel Layun to offer penetrative passing options to the back three.

Mexico regularly used this setup to manipulate South Korea’s man-orientated defensive approach. As Alvarez stayed deep in build-up alongside the centre-backs, South Korea’s left winger often pushed up to maintain access to Alvarez for pressing. This resulted in space behind said left winger, which was often occupied by Layun, Herrera or Guardado. An example of this is seen below. Alvarez has the ball and draws out the South Korean left winger while Guardado takes up the space behind, unmarked, facilitating a potentially simple passing move to break the lines. 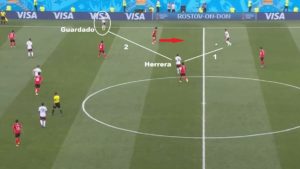 Alvarez was also intelligent in creating space for his teammates through dribbling. In the example below he drives forward, towards South Korean defenders, with the ball at feet. Eventually, this forces the South Korean defenders to pay attention to him, contracting together to ensure he doesn’t dribble any further forward. By drawing defenders towards him, Alvarez frees up Carlos Vela between the lines and Layun on the right wing. 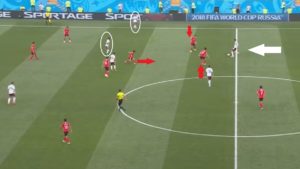 Mexico’s right-hand side was hugely influential in their build-up. As well as using a deep right-back within a back three to provoke or help play around pressure, they made good use of their many players on that side of the pitch. Guardado and Herrera both oriented themselves towards the right, along with Layun, Alvarez and Salcedo. Vela and Javier Hernandez also occasionally moved in and around the right wing and half-space. The number of players stationed on the right, along with the positional rotations between these players, meant Mexico were consistently able to construct possession through triangles on this side.

South Korea defended in a deep 4-4-2 block that saw Lee Jae-sung support Son in the first line of pressing. However, late on in the first half head coach Shin Tae-yong made the decision to swap Lee with RB Salzburg striker Hwang Hee-chan, who was previously stationed on the left wing, perhaps in order to guarantee greater counter-attacking threat through the centre.

Rarely pressing Mexico’s back three in their build-up, South Korea instead retained a vertically compact shape and looked to congest space between the lines. The front two of Son and Lee/Hwang were crucial in this respect, providing backwards pressing to ensure the opposition ball-player was harried from multiple directions, limiting their scope for passes and dribbles. 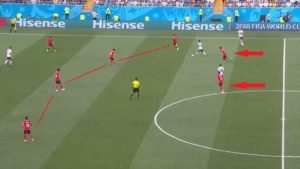 By defending deep and maintaining compactness, South Korea were able to apply intense man-orientated pressure in lower areas of the pitch, often getting three or four players around the ball when it entered their half. However, while this had the effect of stultifying Mexico’s build-up on one side, it often left the ball-far flank open. That, perhaps, was Osorio’s plan all along.

Hirving Lozano was one of the most important individuals in Mexico’s win over Germany. Time after time he found himself running or dribbling into dangerous situations or open spaces on the counter-attack; on one of these occasions he scored what turned out to be the winning goal. However, South Korea were happier to sit deep and defend, and were therefore less open than the Germans. The question, then, was how to get Lozano into space. The answer was to overload the right-hand side.

As discussed earlier in this article, Mexico’s central midfielders – Guardado and Herrera – spent the majority of their time in this match somewhere between the centre and the right wing. This can be seen below in a heat map showing where the pair’s 119 combined touches came. 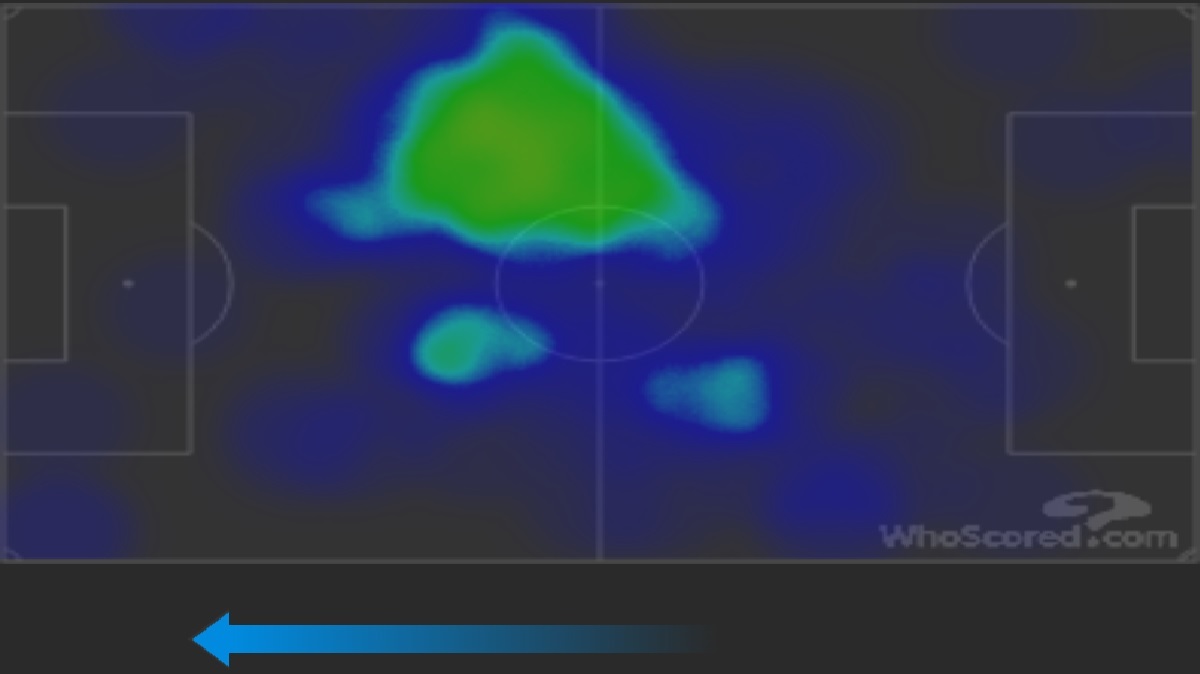 Such a focus on one side from both central midfielders within a 4-2-3-1 system is curious, and all the more so when considering Mexico’s back three was also lopsided – as opposed to left-back Gallardo, right-back Alvarez stayed deep and was heavily involved in build-up.

The aim behind this right-sided emphasis appeared to be sucking a man-orientated South Korean defence over to the Mexican right so as to isolate Lozano on the opposite side. An example of this can be seen in below. Here, Alvarez dribbles forward towards pressure. Hernandez peels off the front-line and Layun drifts in off the right wing, both into the same circled area. Herrera provides support to the left of Alvarez. These movements draw in six opposition defenders, creating a huge space on the left wing, where Lozano is stationed very close to the touchline. 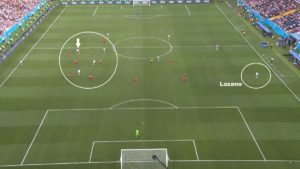 Lozano possesses dribbling skill and searing pace, so these situations were highly profitable for him and the team. From here, he was able to get into 1v1 match-ups with the opposition right-back that he was almost certain to win and create shooting opportunities for himself or his teammates. Alternately, by drawing out the right-back he would help to stretch the South Korean back four and create space between opposition defenders for teammates to target.

Against Germany, Mexico were devastating in attacking transitions, moving quickly forward into spaces left by their opposition to create a multitude of good scoring chances. However, against South Korea they showed another side to their game, demonstrating quality possession. They also deployed a more aggressive defensive approach, with man-orientated pressing and counter-pressing high up the pitch. 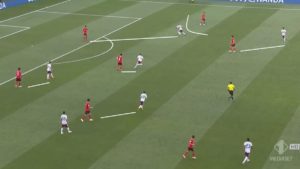 While South Korea struggled to play out against such a high pressing and counter-pressing defence, they did find some joy later on in the game. Mexico, quite naturally, tired as the match wore on, leaving more space to be exploited, though there was also the slight structural issue of a high press combined with a medium (not high; not low) defensive line leaving room in the middle third for South Korea to exploit.

This one small problem aside, Mexico were once again enjoyable to watch and highly effective, ultimately winning 2-1. After showing rapid counter-attacking and sound organised defence against Germany, they showcased intense pressing and excellent possession play against South Korea. There is consequently a fair argument to be made at this early juncture that they are not only the most intriguing side at the World Cup, but the most tactically versatile.