Sweden picked up three points in a hard-fought 1-0 victory over South Korea to open up their FIFA World Cup 2018 campaign. The Koreans failed to register a shot on target due to some staunch Swedish defending. It was Andreas Granqvist’s second-half penalty that gave the Swedes an oh-so-typical Swedish victory: ground-out yet always within control. 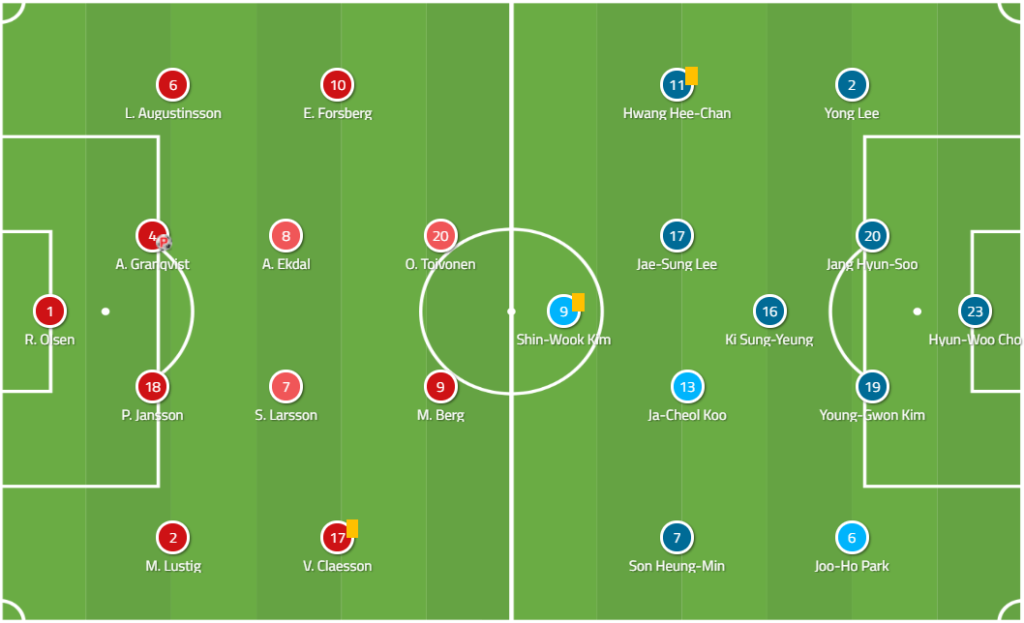 Janne Andersson, the beloved Sweden head coach, set out his primary 4-4-2 formation against group underdogs South Korea. Marcus Berg acted as somewhat of a typical forward running behind lines while Ola Toivonen looked to roam around winning headers. Sweden’s midfield was fluid going forward, especially Emil Forsberg. The Leipzig creator could be found dropping deep to receive the ball, roaming in the left-half space, or staying wide to stretch the Korean defence at times.

Captain Andreas Granqvist played a crucial role in the match besides his penalty kick. He carried the ball out of the back many times, often bypassing Shin-Wook Kim’s pressing efforts and finding a teammate between the lines. Left-back Ludwig Augustinsson was also positive going forward, overlapping when Forsberg decided to tuck inside.

Sweden used a variety of defending mechanisms ranging from a high-press to a deep, multi-layered block of eight. Berg and Toivonen were instrumental in Sweden’s defensive efforts; by virtue of their high positioning, the strikers forced South Korea to play on the flanks instead of through the middle. The midfield double-pivot of Albin Ekdal and Sebastian Larsson stuck close to the back line in a bid to reduce Korea’s operating capabilities above the box: “Zone 14” if you will.

South Korean manager Tae-Yong Shin set up a different formation to the Swedes but projected very similar underlying themes onto his players. Target man Kim roamed throughout the final third — like Toivonen — in an effort to win as many headers as possible. This was necessary as South Korea’s defenders would hoof the ball forward at almost any attempt by Sweden to pressure the ball.

Korean captain Ki Sung-Yeung operated in a role between the midfield and defence when in possession. Out of possession, however, the Swansea veteran often joined the defensive unit to form a five-man back line. This was most common when Sweden looked to send balls into the box after advancing into the final third of the pitch.

Later in the match, Ja-Cheol Koo was used as an outlet in the midfield. However, his positioning in the eight role was not successful. Son Heung-Min — the star of this Korean side — failed to make a large impact in the final third despite his fluid role in possession.

Sweden kept the ball for long periods of the match, but South Korea’s tight-knit defensive unit was difficult to thwart. A mix of long balls and midfield possession troubled the Koreans at times, but Sweden weren’t able to control the match in the final third. Korea, however, struggled a lot when trying to counter-attack as they had too many men committed deep in their half.

The main priority of Sweden’s attack was the long ball. Whether that was from the goalkeeper, defense, or midfield, the main entry point to unlocking Korea’s defense for the Swedes was a direct ball over the top. Ola Toivonen is 6’2″ (189cm) and was often the focus of these passes. While the lanky forward would often drift to the flanks to compete in these aerial challenges, the double-pivot of Sebastian Larsson and Albin Ekdal waited to pounce at the knockdown. If the Koreans managed to win the second ball, they would be met with immediate pressure.

Strike partner Marcus Berg would run in behind the back line to try and catch the Koreans off guard. Depending on the area of the challenge, Viktor Claesson or Emil Forsberg would also look to run in behind. Often, it wasn’t the immediate second ball that opened up the Korean defense. Instead, the immediate counter-press by the Swedes often forced rushed clearances by South Korea.

Janne Andersson did not build his gameplan solely on the long ball, though. Sweden set out to keep possession when possible and ended up with nearly 65% of it by the halftime whistle. This was largely due to South Korea’s conservative approach highlighted above.

Striker Shin-Wook Kim was isolated in his pressing efforts as wingers Son and Hwang marked Sweden’s full-backs. Defensive midfielder Ki Sung-Yeung dropped extremely deep, often drawing level with the rest of Korea’s back line to form a 5-4-1 formation. This made it extremely difficult for Sweden to lob balls successfully to the forwards, but gifted defenders Granqvist and Pontus Jansson lots of space to dribble into.

We see that Emil Forsberg would often roam inside from the left to construct a lopsided midfield triangle. A majority of Sweden’s passing occurred between the two central defenders, midfield double-pivot, and Forsberg.

Korea’s shape stayed the same when Sweden entered the final third. It was extremely congested, especially for Forsberg in the middle. Through passing sequences, Sweden sometimes got their full-backs open in the half-spaces. This could be due to Korea’s wingers overcommitting when man-marking them. Sweden found some luck when sending crosses into the box but ultimately couldn’t make anything work until the second half.

The Koreans defended well but were unable to make much noise when counter-attacking. This is largely due to how deep they defended; Son Heung-Min was often isolated going forward. One long-term symptom of this was Korea’s inability to create, represented by their failure to register a shot on target.

0 – South Korea haven’t fired a shot on target in a #WorldCup match for the first time since 1966 (30 matches). Forceless.

Sweden’s flat 4-4-2 turned into somewhat of a wide 4-2-2-2 when South Korea were in their initial build-up phase. Toivonen and Berg marked the two centre-backs and Ki, while Forsberg and Claesson man-marked the full-backs. Ja-Cheol Koo and Jae-Sung Lee — Korea’s two higher midfielders — were easily marked out of dangerous spaces by Ekdal and Larsson.

Captain Ki Sung-Yeung operated as the fulcrum in South Korea’s ‘Salida Livolpiana’, the tactic of moving the centre-backs wide and dropping a midfielder between them. This wasn’t used effectively, though, as the midfield was left empty. Neither of Korea’s advanced midfielders dropped at the correct times to facilitate a passing sequence.

Either way, South Korea’s main tactic was to put long balls towards Sweden’s box. Most of these long balls were either unsuccessful or in areas lacking pressure on the Swedish defence. Above, we can see the successful aerial duels by Korean striker Shin-Wook Kim compared to those of Berg and Toivonen.

As the match grew older, South Korea commanded more possession. Sweden dropped deeper, restricting space in the centre of the pitch like Korea did on the other end. South Korea struggled to put the ball in dangerous areas out wide or in the middle. A lot of their failure to do so should be credited to Sweden’s defence, which masterfully shut down Son Heung-Min on both the right and left flanks.

Sweden scored mid-way through the second half, thanks to a VAR-awarded penalty won by Viktor Claesson. The situation arose when Korean right-back Yong Lee temporary left the pitch so his injury could be assessed. Sweden pressed high and won the ball and ran into space at a depleted South Korean defence.

A poor giveaway on the wing gave Emil Forsberg time and space to deliver a pass to the wide-open Marcus Berg (pictured on the ball). Berg then found a cross-cutting Viktor Claesson, who had already beaten Korea’s left-back. This left only two Korean defenders to cover three attackers. Forsberg received the ball wide, giving him the necessary space to cross back to Claesson.

A penalty was given after some deliberation and a VAR review. Defender Andreas Granqvist, an instrumental player for Sweden throughout the match, stepped up and calmly slotted the ball into the bottom corner. It was a lucky break for Sweden but certainly a deserved goal given the flow of play throughout the 90 minutes. That being said, South Korea could have easily left this game with a clean sheet as well.

Sweden controlled the ball for long periods of this match, but it took a penalty to win three points from this game. South Korea struggled to break down the flat 4-4-2, relying heavily on long balls which were ultimately futile. A lack of bodies in advanced areas meant a failure to effectively counter-attack, which is realistically the best way to defeat this Sweden side.

Sweden, on the other hand, played this match within their comfort zone. Emil Forsberg often failed to affect the Korean defence, but Ola Toivonen proved an effective outlet. Moreso, Granqvist seems to be an undeniably useful player to build from the back with.

This match was by no means a midfield battle, but the heat map shown above grants us additional insight into how Sweden were able to control the match for large periods of time. The double-pivot of Ekdal and Larsson remained structured and both wingers were threats in the middle of the pitch. Conversely, South Korea’s midfield trio were all over the place (literally). Ki Sung-Yeung, the holding midfielder, was often out on the right flank, a testament to Korea’s lack of organization.

If you want to read more about Sweden’s victory, check out Vivek Menon’s post-match takeaways for the Swedes. Or perhaps if you’d prefer to read a suffering man’s words, here’s Hanu Trivedi’s expletive-ridden observational piece for the Koreans.