Belgium came into their second game at the 2018 FIFA World Cup after a convincing-yet-uninspiring 3-0 win over Panama in the opener. It has been that way for Belgium under Roberto Martinez; they regularly thrash minnows but struggle against genuine top-class opposition. While Tunisia can hardly be categorised into the latter, they were expected to provide a sterner test of the Red Devils’ credentials. The lack of a defined style of play, as well as the players’ unfamiliarity with the 3-4-2-1 system, could turn out to be significant inhibitors as the tournament goes along.

Tunisia’s rearguard action almost earned them a point against England, only for Harry Kane to pop up right at the death. Nevertheless, coach Nabil Maaloul had stated a desire to be more attacking against the Belgians, as the Eagles of Carthage barely created any chances of note in the previous game. They needed at least a point to stay alive in the tournament and would look to cause Belgium trouble out wide and from set-pieces. 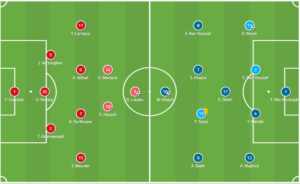 Roberto Martinez named an unchanged side from the opening fixture, which meant that Dedryck Boyata continued to play in the absence of Vincent Kompany and Thomas Vermaelen.

Nabil Maaloul made two changes from the opening fixture: Farouk Ben Mustapha started in goal, having come on for the injured Mouez Hassen against England, while Saif-Eddine Khaoui replaced Naim Sliti in midfield.

Belgium’s setup is admittedly an awkward one to play against; the two attacking midfielders play in the half-space, between the opposition central midfielder, fullback and centre back, making it extremely difficult to pick them up. Additionally, Romelu Lukaku’s movement and positional sense has improved exponentially since his move to Manchester United, and he would constantly be dragging defenders all over the pitch, leaving even more space for Hazard and Mertens to thrive in.

The variety and quality of Lukaku’s movement was excellent and allied with his finishing, Lukaku is quickly developing into the complete centre-forward. Behind him, Hazard was exquisite, tormenting the opposition for the second game in a row. Given license to roam, he did exactly that, popping up everywhere across the width of the penalty area, and even turning into a strike partner for Lukaku at times.

Hazard and Lukaku dovetailed extremely well throughout this game, and their combined creative and scoring excellence will be a major threat for other teams in the tournament.

Belgium’s wide areas are a concern

Thomas Meunier is nobody’s idea of an old-fashioned defender. He is the typical modern full-back, always looking to get forward and influence the game in the final third, while on the left, Belgium play Yannick Carrasco, a converted winger, as the wing-back. Both players were regularly closer to the Tunisian penalty area than their own, and while the system employed demands the wing-backs to provide width, it also needs them to cover the flanks, especially if the opposition full-back advances to make it a 2v1 along with the winger. It was especially surprising to note their average positions, as seen in the passing map provided below by @11tegen11 using Opta data – 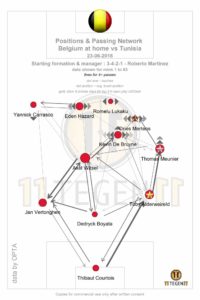 Both Meunier and Carrasco were high up the pitch; however, Carrasco’s average position looks more like that of a winger than a wing-back. There would almost always be a huge gap between Vertonghen and Carrasco for the Tunisian players to run into, causing Axel Witsel to come across to cover.

Meunier was marginally better; he held his position more and timed his forward bursts well. However, there were instances when he was the most advanced player on the pitch, such as the example below where he is about to set up Lukaku for his second goal. 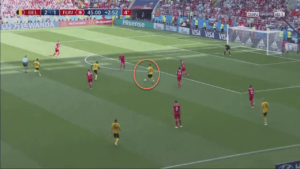 While his attacking endeavour is to be admired, and it did lead to a goal in this instance, it left Dries Mertens and Kevin De Bruyne covering for him, who are certainly not the players Belgian fans want to see being forced to defend rapid counterattacks. There is a lot of vulnerability on Belgium’s flanks, especially down the left flank, and cannier and better opponents could wreak havoc. England, Belgium’s next opponents, certainly have the kind of players who could hurt Belgium in wide areas, with Sterling, Rashford, Lingard all comfortable drifting wide and using their pace to drive at defenders. Belgium have been warned, now they need to shape up or be shipped out of Russia sooner rather than later.

If you’ve enjoyed reading this, please check out our analysis of Serbia vs Switzerland, France vs Peru and Brazil vs Costa Rica.