A late goal by Xherdan Shaqiri led Switzerland to beat Serbia 2-1 in their second Group E game. This result places Swiss in a good situation as they are guaranteed to get out of the group stage with a win in their final match against Costa Rica, whilst Serbia need to overcome Brazil.

The starting XI’s were almost identical to the ones Switzerland and Serbia utilised during their first games with the only change coming for Mladen Krstajic’s side where Kostic took the place of Adem Ljaic as left-winger. Swiss coach Vladimir Petokovic kept his team unchanged from their superb display against Brazil in the opener.

Serbia went ahead in the fifth minute courtesy of an Aleksandar Mitrovic’s header following a perfect Dusan Tadic cross from the right side. But Switzerland reversed the game’s momentum in the second half when Granit Xhaka hit from outside the box past to beat Serbian goalkeeper Vladimir Stojkovic. This goal turned the match as it went into Swiss hands and ultimately Shaqiri poked the ball past Stojkovic to score the winner for his team.

Here below are some thoughts on Switzerland’s 2-1 win at the Kaliningrad Stadium.

Serbia’s tactical approach is well-known. They use the wings to deliver crosses in for Milinkovic-Savic and Mitrovic up top, trying to win the second ball. These crosses are provided by the wingers and also by the full-backs from lower positions. 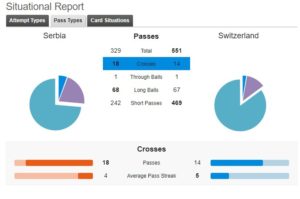 Opta stats taken by Whoscored.com highlights how much this has been a game of crosses and direct balls. Running this way, Serbia gained the control by adopting a strong but still organised brand of football which raised comparison with the one orchestrated by Croatia. The difference is that while Croatia don’t necessarily have to win the second balls to create danger, Serbia do. It worked in the first half while it didn’t in the second 45 minutes of play.

A good weapon for Krstajic’s team in the first part of the match has been the smart movements made by Tadic from the right side, particularly the assist he produced for Mitrovic’s opening goal. 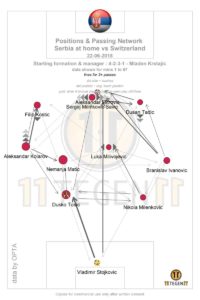 The above pass map created by @11tegen using Opta data shows us how Serbia relied on the flanks in their offensive phase, with Kolarov being a kind of wide playmaker.

But Serbia have initially been functional also without the ball, defending in a horizontally and vertically compact 4-4-2 defensive formation. The Serbs effectively pressed and counter-pressed the Swiss up top forcing Petkovic’s team to play long balls easily caught by centre-backs Nikola Milenkovic and Dusko Tosic.

The second half was very well played by Switzerland as they executed the game plan put in place by their coach Petokovic, which made some key adjustments. First and foremost, he replaced centre-forward Haris Seferovic after he managed just five touches in the first half. Seferovic’s substitute, Mario Gavranovic, gave Swiss more depth. With Gavranovic attacking Serbia’s backline, more space was created for the attacking trio playing behind Dinamo Zagreb’s striker.

But, above all, the main decision made by Petkovic was to move Shaqiri from the right side to the middle as no.10. In the new position, Shaqiri had an impact finding spaces behind Serbian midfield duo of Luka Milivojevic and Nemanja Matic. With Stoke City’s player running through the middle, the Swiss manipulated Serbia’s tactical compactness. Shaqiri’s central position additionally helped Switzerland’s offensive play with his runs past Serbian defence.

The picture above shows as Serbia’s back-line were caught on counter in Shaqiri’s winning goal. Krstajic’s side was unbalanced in the effort to score as they knew that a tie would have been probably useless with Serbia’s last group game being against Brazil.

Then, when Petkovic brought on Breel Embolo, the weakness of a back-line was further exposed. With their offence more fluid, the Swiss were able to generate a lot of passing lines that didn’t appear in the first half.

While Milinkovic-Savic was impressive in the first game against Costa Rica, this time the Lazio midfielder wasn’t so good, completing just 79% of his passes and winning just 4/23 duels. On the other side, Xhaka helped his side when in possession with 80 passes played and 87% in terms of accurate passes. When in possession, Switzerland initiated fast counter-attacks in the second half trying to maximise the speed of players such as Shaqiri and Embolo.

The below picture taken by SofaScore highlights Xhaka’s contribution to Swiss win. 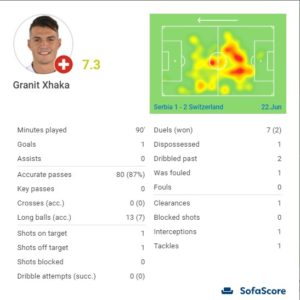 Xhaka is a key player into Petokovic’s game plan as he allows Switzerland to retain ball possession when it needs but also helping Valon Behrami in front of the back-line.