Both teams were surely expecting this match to be their best chance of earning some much-needed points considering the rest of the group consisted of Brazil and a strong Switzerland side. Serbia are the lowest-ranked European team at the tournament (34th) and with Costa Rica ranked 23rd it was always likely to be a close battle. 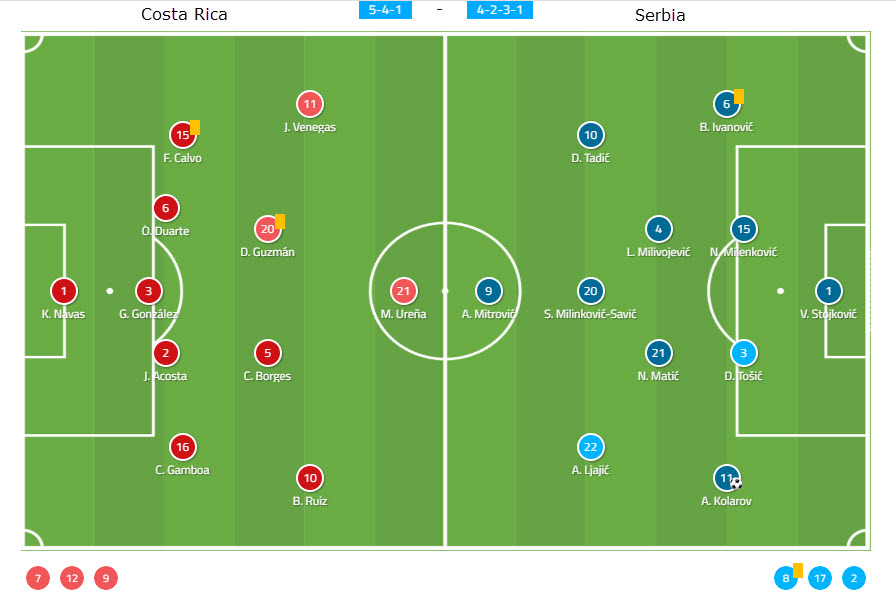 Costa Rica lined up in their usual 5-4-1 formation that’s served them so well over the past few years, with the only real surprise in the lineup was the omission of Joel Campbell who had often started during qualifying. Serbia lined up in a 4-2-3-1 that is stacked with talent. The midfield trio of Matic, Milinkovic-Savic and Milivojević, in particular, looks impressive on paper and will surely be key to any Serbian success in the tournament.

I was very impressed with the Costa Rican defensive performance against England in the recent friendly and they impressed me again against a very tough Serbian team. As you’d expect from a 5-4-1 formation, they were very hard to break down which was a credit to their fantastic organisation. When out of possession the Costa Rican midfield dropped deep in front of the defence forming 2 compact banks of players spread out across the pitch which Serbia struggled to break down. Marco Urena up top often looked an isolated figure as a result, 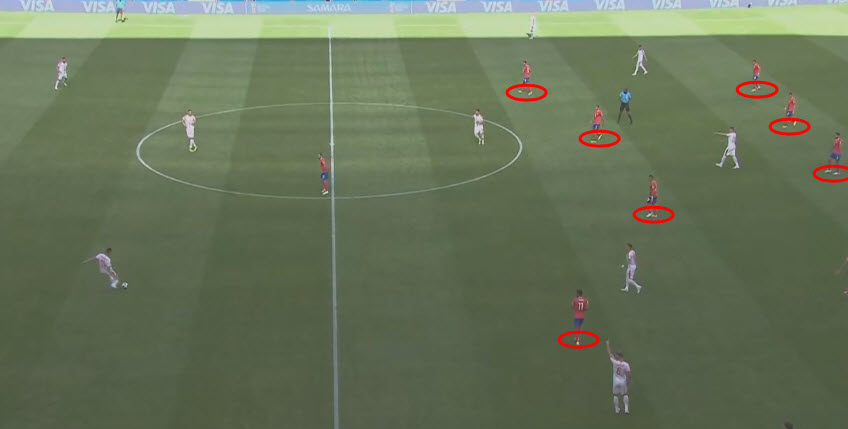 As you can see from the above picture, the Costa Rican midfield is barely 25 yards away from the defence – despite the ball being in the Serbian half. This obviously made it very hard for Serbia to work the ball into their fantastic midfield trio. When Serbia did manage to work the ball into midfield, that’s when Costa Rica pressed – swarming the central midfield with players in order to halt the attack.

The Costa Rican central midfield at times also tightly marked the Serbian midfield to stop them progressing the ball through the lines, forcing Serbia to play more direct and funnelling play down the wings.

With the centre of the park packed, Serbia had to try a different approach – using the wings to pump crosses in for Milinkovic-Savic and Mitrovic to get on the end of.

In theory with the tallest side in the World Cup (with an average height of 6ft) and 6”2 Milinkovic-Savic just behind 6”1 Mitrovic and fantastic crossers of the ball in Tadic, Kolarov and Ljajic – the game-plan made sense and was made a necessity with Costa Rica funnelling them into these areas as mentioned above. But it didn’t quite work as planned – The only 2 Serbian players able to get into the box to try to get on the end of the crosses were Milinkovic-Savic and Mitrovic – but with 3 Costa Rican central defenders outnumbering them – with the midfield also dropping back into the box it would have required something special or a defensive error to generate a decent chance. 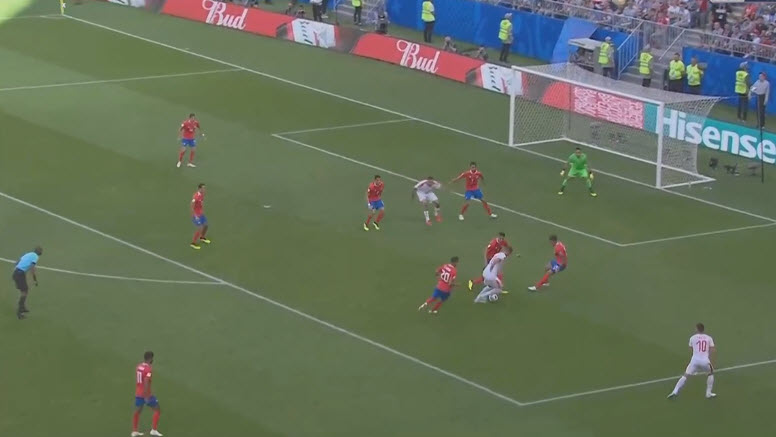 As you can see from the above, Serbia struggled to get numbers in the box which in turn contributed to their lack of decent chances – instead having to take shots from range (despite Mitrovic managing to a miss a few relatively easy chances when through on goal) as demonstrated by their shot map. 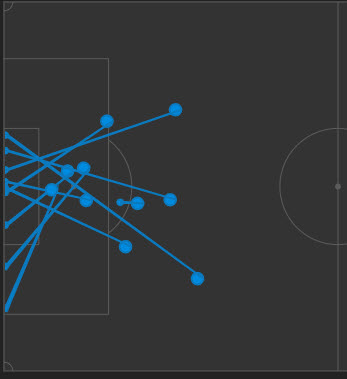 Milinkovic-Savic has won plenty of credit for his performances with Lazio over the past couple of seasons and he carried that on for his national team with a fantastic display that earned him a man of the match award. The midfielder had the most key passes in the match (3), the most dribbles (5) and always looked lively – even producing a fantastic overhead kick that forced Navas into making a great save. I’m sure big clubs were already highly interested in him and if he carries on with performances like this I’m sure the chase for his signature will certainly heat up.

Whilst I’m not expecting Costa Rica to go far in the tournament they are obviously a very well disciplined side and I fully expect Switzerland to have trouble in breaking them down as it took an almost unsaveable free-kick from Kolarov to get the win for Serbia. Brazil will also prove an interesting test for them – although I obviously feel they’ll struggle less. Serbia didn’t look to be able to cope with the low block that Costa Rica employed, and I imagine they’ll fare slightly better against teams that attack more – although it’s hard to see them getting anything against Brazil!