Germany, the defending champions, came into the 2018 FIFA World Cup with mixed emotions. One on hand, they seemed to be in rude health, having easily swept through qualifying without dropping a point for Russia 2018, while a young, experimental side had won the Confederations Cup last year, highlighting the strength in depth at Joachim Low’s disposal. On the other hand, their preparation for the World Cup had been lacklustre, with Die Mannschaft winning just one out of four friendlies, including a draw against Spain and defeats to Brazil and Austria. Germany’s system and tactics were almost intact from their victory in Brazil, and even with some turnover in the playing squad, there are still nine players from the previous squad in Russia. This has led to concerns that Germany’s style may now be too predictable; especially so after their performances in the pre-tournament friendlies. Low had already made a big call by dropping Manchester City starlet Leroy Sane from the squad, despite their not being a similar player among the rest of his options. Germany needed a good, convincing start to the tournament in order to put all doubts to rest over their title credentials.

Mexico too breezed through qualifying, losing just one game over the last two rounds of CONCACAF qualification, as Juan Carlos Osorio built a versatile, astute side. While he has come under fierce criticism from fans back home over his tendency to rotate players as well as chop and change systems, the result has been that El Tri are one of the most flexible sides in Russia, capable of playing with a three-man or four-man backline as well as a variety of midfield configurations. Osorio has rightly been called a tactical chameleon in the build-up to the tournament, and an opening match against Germany gave him the opportunity to show the suitability of his methods.

Germany lined up as expected in a 4-2-3-1, with Marvin Plattenhardt in at left-back, Toni Kroos and Sami Khedira in midfield and the pacy Timo Werner starting up top. 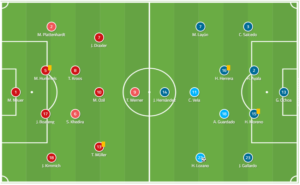 Mexico took to the field in a 4-2-3-1 as well, as Javier ‘Chicharito’ Hernandez was preferred to Raul Jimenez in the striking role. Miguel Layun took up a role on the right flank, while Carlos Vela shrugged off fitness concerns to start as the #10.

Mexico press high up the pitch

Mexico began extremely brightly, forcing a corner within the first minute of the game and causing some panic in the German box from the ensuing delivery. Manuel Neuer claimed the ball eventually, and as is his wont, played a short pass out to Plattenhardt on the left. The left-back switched play to the right, and immediately there were three Mexican players swarming over the man in possession and cutting off passing options. El Tri pressed extremely high, especially in the opening stages of the game, disrupting the German build-up and forcing them to even go long a couple of times. This was done quite intelligently, as the press would be triggered when the ball was close to either touchline, to use it as a natural barrier and force the player inside towards oncoming players.

Kroos is shut down

Toni Kroos is the literal heartbeat of this German side, knitting the play together and allowing them to progress up the pitch. There was a clear plan to target him, with Mexico almost always having a player close to him when he received the ball. Kroos dropped into the centre-back line, both on the left and the right, in order to receive the ball from Neuer or the two defenders and recycle possession. Mexico had planned for this, so the wingers Layun and Lozano would press Kroos depending on which side of the pitch he was on, with Hernandez taking up the responsibility if he was in a central position. While Kroos did make the most passes of any player on the pitch, he was quite subdued by his standards and failed to have a decisive impact on the game from open play.

This was an extremely accomplished display from Javier Hernandez, who displayed positional nous and brilliant awareness of his opposition. While contributing to the pressing effort from the front, as shown above, Hernandez was extremely intelligent with his movement, often dropping deep to drag a marker out before laying off a quick pass and spinning into space just vacated. This was at odds with his reputation as a pure penalty-box poacher and suggests that Osorio has done a lot of tactical work with the striker to allow him to fit into his scheme.

Behind him, Carlos Vela also had a superb match, in part due to Germany’s insistence on giving him acres of space. Vela has had a difficult last few months, racing against time to be fit for the World Cup while also having to face doubts over his suitability for top-level football, having moved to newly-formed LAFC in the MLS. However, this display, even though it lasted just around an hour, should allay any fears over the Mexican playmaker’s abilities. His movement and spatial awareness are top-notch, and opposition sides would do well to take note of the carnage he caused here: Mexico could easily have been two or three goals up by half-time, with Vela having set up all of those chances.

Mexico’s plan was to disrupt Germany’s build-up with a high press, and if that failed, to drop back and mark their players across midfield, in order to deny them space to execute their quick passing moves and interchanges. It worked almost perfectly, with Germany playing into their opponents’ hands. Data from Whoscored.com showed that the majority of both teams attacks came down Germany’s right; Joshua Kimmich was positioned extremely high up the pitch, which gave Hirving Lozano plenty of room to run into on the counter. Secondly, there was a lack of subtlety to Germany’s positioning: Sami Khedira was either too deep or too advanced throughout the match, very rarely offering a passing option to Kroos or Boateng, while Draxler and Muller played too centrally, allowing the Mexicans to compress the space. At least one of them should have been out wide, forcing a full-back to follow them and opening up the half-spaces for Ozil to work in. This is where Leroy Sane would have been useful, stretching the play and allowing Ozil and Muller more space to work in. As it was, Mexico were relatively comfortable in the first-half, with Germany only really beginning to threaten once their opponents tired and dropped deep in the second half.

Mexico were well-drilled and tactically prepared, with Osorio stating post-match that they had been working on their tactics for this game for two months. It worked out impressively, with Die Mannschaft unable to live with Mexico’s pace on the break, while El Tri’s pressing, marking and closing down of space stopped the Germans from playing their preferred system. Osorio showed his detractors that there is merit to his madness, while Low has a task on his hands to prevent a catastrophic first-round exit.

If you enjoyed this, please check out our pieces on the France vs Australia, Croatia vs Nigeria and Argentina vs Iceland games. Thank you.