Brazil entered the 2018 World Cup with optimism after an excellent finish to their qualification campaign. Led by Tite, they won 10 and drew two of their final 12 matches to reach this summer’s finals comfortably, topping the CONMEBOL qualifying section. Their resurgence was built on an improved defence, though noticeable issues in their attacking play have cropped up since.

In the 2-0 friendly win over Croatia, Tite’s side struggled to play out against their opposition. This led to a difficulty in building attacking moves, and a failure to create frequent scoring chances. While they won that match eventually, they also gave tactical hints to their World Cup group stage opponents. Switzerland, who they faced in the opening game of the tournament, took notice and exploited the aforementioned issues to earn a deserved 1-1 draw.

To analyse Brazil’s build-up struggles, we must first identify their attacking setup. They line up in a 4-3-3, with Alisson their goalkeeper. Their back four is made up of Danilo and Marcelo in the right- and left-back roles respectively, with Thiago Silva and Miranda forming the central defensive duet. Casemiro sits centrally in front of them in a defensive midfield role, while Paulinho and one of Fernandinho or Philippe Coutinho occupy slightly higher and wider positions within the midfield three.

One of the clear priorities for Brazil during the early stages of possession is to remain compact. Horizontal compactness is achieved through the stationing of the full-backs on or very near to the first line of build-up, along with the centre-backs, while vertical compactness is achieved by the positioning of Casemiro, and one of the other central midfielders, in front of the central defenders.

The reduced distance between players in build-up theoretically allows for quicker passes and a number of potential combinations; it should also mitigate some of the threats of losing possession – with plenty of players in close proximity to the ball, they stand a better chance of winning it back, diverting the counter-attack, or blocking the resulting shot.

However, this compactness also invites the opponent to press higher. With the full-backs staying deep and only one of the central midfield three positioning himself consistently behind the opposing midfield line, there are fewer Brazilian passing options and wide out-balls in advanced areas of the pitch for opponents to cover.

Another problem for Brazil during their build-up is a lack of dynamism. Apart from Marcelo, who occasionally moves high and wide early on to offer an outlet on the left flank, the players in their first and second lines of build-up are fairly static. Again, this only invites the opposition to press, safe in the knowledge that there won’t be a great deal of movement behind to worry about their first wave of pressure being broken.

Croatia highlighted these issues during their friendly defeat to the Selecao. Setting up in a 4-4-2 defensive shape with intensively man-oriented pressing, Luka Modric and co. were able to successfully stultify Brazil’s build-up for the most part. Their front six (two strikers, two central midfielders, and two wingers) covered and pressed Brazil’s back four, as well as Casemiro and Fernandinho. 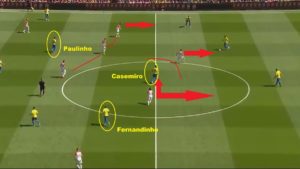 An example of this setup can be seen in the graphic above. Here, Croatia are able to both press the ball-playing Brazil centre-back and form cover shadows on Casemiro and Fernandinho, Brazil’s deepest midfielders. As for Paulinho, he is situated behind a compact three-man line of Croatian midfielders. There are no obvious passing lanes forward for Silva, who is in possession of the ball.

More lateral movement from Fernandinho and Casemiro behind the first line of Croatian pressing may have helped them to find space and offer a pass to their central defensive teammates. But, as it was, they, and Paulinho, were static and unreachable. Unable to progress possession safely through the lines, Brazil were often forced into hitting ineffective long balls to an aerially dominated front-line.

Tite was always likely to find it difficult to implement a structural overhaul of his side’s build-up with so little time before the World Cup, though he did take the decision, post-Croatia, to introduce Coutinho to the midfield three instead of Fernandinho. Some benefits of this change in personnel were seen in the friendly win over Austria.

Below, Coutinho can be seen moving up in his channel while occupying a space between two opposing players. By occupying this space and performing this movement, he is looking to get beyond Austria’s midfield line whilst simultaneously remaining a viable passing option for Casemiro. Seconds later, the Barcelona man will receive a pass from his defensive midfield teammate, progressing possession into Austria’s half. 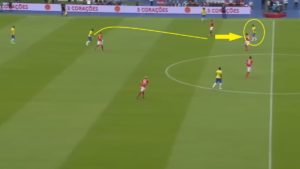 Coutinho’s inclusion on the left of the central midfield three brought greater mobility, dynamism, control and quality to Brazil’s build-up. The 26-year-old, who has often been preferred on the right wing in Tite’s 4-3-3 system, showed he is not only comfortable receiving the ball under pressure, but also comfortable adjusting his position to create penetrative passes or connections with teammates.

For all of the above reasons, he stayed in the same role, within the same tactical system, for Brazil’s World Cup opener versus Switzerland. And he didn’t waste time showing what else he could offer to his team from his deeper, more central starting berth. One example of his vision and passing ability is seen below. Here he comes deep to escape marking and receive possession from the centre-backs, before identifying and executing a forward pass to Paulinho that breaks two lines of Swiss pressure. 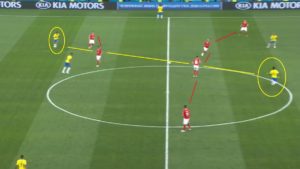 Switzerland defended against Brazil in a style that was not dissimilar to Croatia’s method, with man-oriented pressing on Brazil’s first and second lines of build-up. Their lone striker oscillated between Brazil’s centre-backs, their No.10 tended to focus on Casemiro, their two central midfielders took turns in moving up to pressure their opposite men, and their two wingers moved up to press the Brazil full-backs when appropriate. Generally, they looked to force Brazilian build-up sideways before pressing in the wider areas or pressing any pass into the Brazilian midfielders from behind.

Up against this defensive approach, Brazil once again struggled to build possession from the back; the general lack of dynamism in midfield made it difficult for the two centre-backs to play penetrative forward passes, so they were once again forced wide to the full-backs or long. However, while the structural issues remained, the individual selection of Coutinho over Fernandinho helped. The playmaker’s importance in build-up situations was only highlighted by the fact he enjoyed 90 touches in this game – only one less than the other midfielders, Paulinho and Casemiro, combined.

Switzerland and Croatia have shown the way for future opponents to successfully press Brazil. Tite’s hope must be that, by placing Coutinho in a deeper, more central role, the overarching issues in his side’s build-up can be alleviated.