Game two in Group D for second placed Argentina against 1st placed Croatia was always going to be a group defining game. The two favourites to progress had conflicting fortunes in their opening games of Group D, Argentina drawing 1-1 with Iceland while Croatia dealt with Nigeria, comfortably winning 2-0.

That unexpected draw against Iceland meant group favourites Argentina could not realistically afford to lose to their Balkan opponents and still hope to qualify into the last 16 round. Croatia on the other hand went into this tie knowing their fate was completely in their own hands, losing would not be the end of the world but a win would confirm their spot in the next round. With both sides boasting some of the world’s best players, this match-up promised quality and attacking flair. 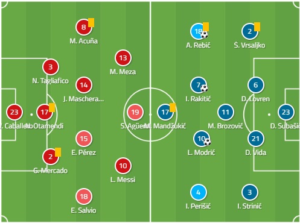 Argentina boss Jorge Sampaoli set his side up in a 3-4-3, a change from the 4-2-3-1 La Albiceleste setup with in their opening Group D game against Iceland. The hope with the 3-4-3 would be to give Argentina more width to stretch the opposition’s block while maintaining defensive cover with three centre-backs instead of two. The formation would also see Messi given a more advanced role, though he was still given license to find space where he wished.

Croatia manager Zaltko Dalic setup in a 4-1-4-1 with the usual back 4 protected by a deep-lying Brozovic, allowing their bonafide world class talents, Luka Modric and Ivan Rakitic, to play more advanced midfield roles. That midfield trio would be flanked by two athletic, powerful runners in Ante Rebic and Ivan Perisic, tireless shuttle men of this Croatian side while Juventus front man Mario Mandzukic would serve as a target man at #9.

Change of Approach for Argentina

The 3-4-3 saw the wing-backs push high and wide in the early minutes of the game and the width helped Argentina push Croatia back when playing out through their back 3. Messi began in a more advanced role and Argentina had more players in advanced positions. But unfortunately for Jorge Sampaoli this didn’t equate to his forwards seeing more of the ball. In fact the back 3 and Mascherano saw most of the ball in this game as Argentina tried to patiently pick holes in the Croatian block. The following pass-map shows how frequently the Argentine back 3 passed the ball amongst themselves. 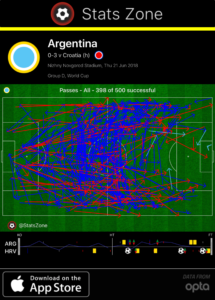 They particularly favoured their left side where Acuna and Meza looked bright early on before Croatia sat a little deeper. The lack of penetration is also obvious as the Argentine forwards made little movement in behind the Croatian back-line. Croatia’s defenders man-marked the Argentine forward line which meant when any of them dropped deep they were closely followed, creating spaces to be exploited but there was no forward runs being made by Sampaoli’s men. 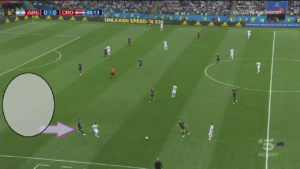 Croatia’s block left very little space in the attacking third for La Albiceleste and Messi had to get creative. Seemingly targeting Strinic as a weak point in Croatia’s back-line, Messi drifted wide right and it almost immediately paid dividends. In the 13th minute Messi received the ball on the right wing while Salvio made an out-to-in run into the space Messi had vacated. 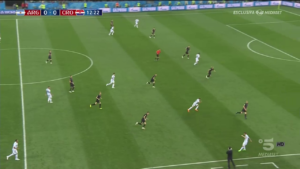 Salvio got to the goal-line before cutting the ball back across to the top of the box where it was met by Meza who’s strike was blocked and deflected over the bar by Dejan Lovren. Once Perisic dropped deeper to ensure Salvio was man-marked, this space was no longer available and Messi drifted more centrally. With the Argentine forwards not seeing much of the ball Messi moved a little deeper looking to get on the ball and influence the game, in turn Mascherano dropped beside Otamendi at the back so that the wide centre-backs could move wide which made Argentina’s shape look like a 4-2-4 in possession. 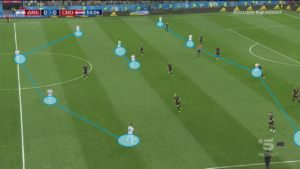 When out of possession the Argentina forwards did not press the goalkeeper or his centre-backs when they routinely played out from the back in the early stages, instead trying to force play wide then aggressively pressing the full-backs. 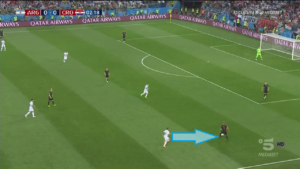 With the Argentina centre-backs along with Mascherano dominating most of the ball in front of Croatia’s 4-1-4-1 block, Croatia ensured that Sampaoli’s side could not utilise their new found width by having the wide midfield players, Rebic and Perisic, track the Argentine wing-backs. Croatia’s full-backs would then man-mark the outside forwards while Brozovic screened the space in front of his back 4. This would often leave Croatia’s formation looking like a 6-3-1 out of possession. 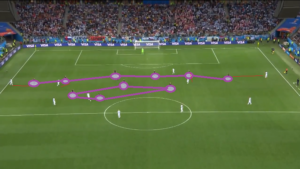 Perisic and Rebic worked tirelessly to track the wing-backs and then pushed forward when their side won the ball back, but their opposite numbers weren’t as keen to track their runner in the early moments of the game and Croatia found some joy either side of the Argentine back 3, creating chances through Perisic and then Vrsaljko. 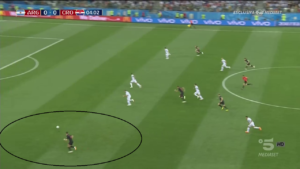 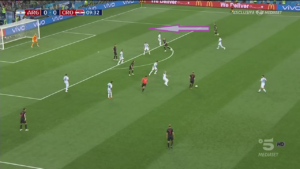 With Otamendi and his fellow defenders seeing a lot of the ball, Mandzukic would press Otamendi frequently as Modric and Rakitic pushed up to press the right and left centre-backs respectively. Argentina then resorted to playing long balls over the Croatian press but they couldn’t compete with the Croats in the air. 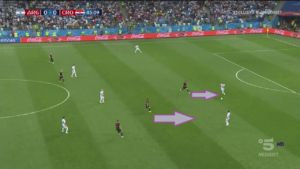 The Croatians are a bigger side than Argentina and unsurprisingly dominated the aerial battles, in fact the first and third goals for Croatia began by winning an aerial duel. 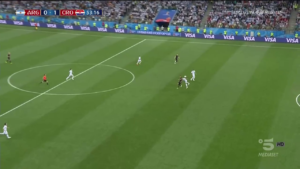 In the 53rd minute Mandzukic beat Otamendi in the air but Mercado beat Rebic to the ball, playing it back to Caballero in goal who tried to return the ball out to his defender but disaster struck. Caballero’s pass was under-hit and the ball fell to Rebic who brilliantly volleyed the ball out of the sky and into the Argentine net.

There was not much between the two sides until Caballero’s mistake but Argentina always looked like the side that would crack first with the weight of expectation on their shoulders. The South American team were favourites but had identity issues in their opening Group D game against Iceland which they drew, meaning this Croatia match-up was a must-not-lose.

Sampaoli immediately made two substitutions after the opening goal but they had little effect. The goal gave Croatia further license to be patient out of possession and with Argentina desperately trying to salvage the situation, Dalic’s men exploited the gaps that Otamendi and co left open with Rakitic and Modric showing their class, particularly evident for the latter in the second goal. By the third goal Argentina had completely given up, Mascherano and Messi stood still as Rakitic rolled the ball into the net. 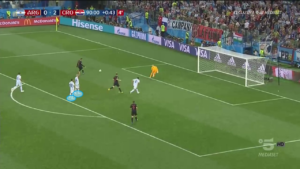 Sampaoli’s tactics seemed incoherent, Argentina had a lot of the ball playing out from the back but there was a huge disconnect between the defence and the forwards with very little movement from the latter to exploit any spaces left by Croatia’s tight man marking. Chances were few and far between but the game was an even contest before the first goal went in. Sampaoli’s reaction was one of panic and Argentina completely lacked any style of play for the remainder as Croatia ruthlessly tore them apart.

Croatia didn’t start this game as favourites and so happily wore the tag of underdog as they setup to cancel out Argentina’s stellar forwards before utilising their superior athleticism to counter attack. They may have scored the first goal through a bit of luck but from that point they were head and shoulders above Argentina. Fittingly Luka Modric and Ivan Rakitic scored the second and third goals, the two midfielders were the best players on the pitch and among the best performers of the 2018 World Cup so far. If this Croatian midfield shows up in further fixtures in front of their well-drilled defence Croatia could be serious dark horses.