Venezuela have long been considered footballing minnows in South America and have yet for make an appearance at a senior men’s World Cup finals. Nevertheless, the future of the sport looks bright. Traditionally a baseball powerhouse, football has been steadily growing in popularity and last year’s run to the final of the U20 World Cup hinted at a sign of things to come.

The likes of Yangel Herrera, Adalberto Penaranda, and Wuilker Farinez starred in South Korea and have been quickly fast-tracked to the senior set-up, as have a number of their U20 teammates. There is now a palpable sense of optimism that Venezuela have a real chance of qualifying for Qatar 2022.

However, the Vinotinto won’t be able to solely rely on this exciting crop of players and will need to continue to develop young talents if they are to establish themselves as a footballing power to be reckoned with. Below, we look at a selection of players born after the year 2000 that suggest their golden generation might not be just a one off.

18-year-old forward Pérez shot to prominence in 2018 after he hit 7 goals in 22 games in Zamora’s Apertura title win, before making the move to Chilean giants Colo-Colo, via La Serena, this summer.

Perez started out at Deportivo La Guaira but only played a few first team games before his switch to Zamora. His old club soon rued its decision to let him go as Perez scored a brace against them in his very first game for Zamora.

Two of Perez’s main attributes are his searing pace and confidence at taking players on. As such he is often deployed as a wide forward where he has more space to run and commit defenders. 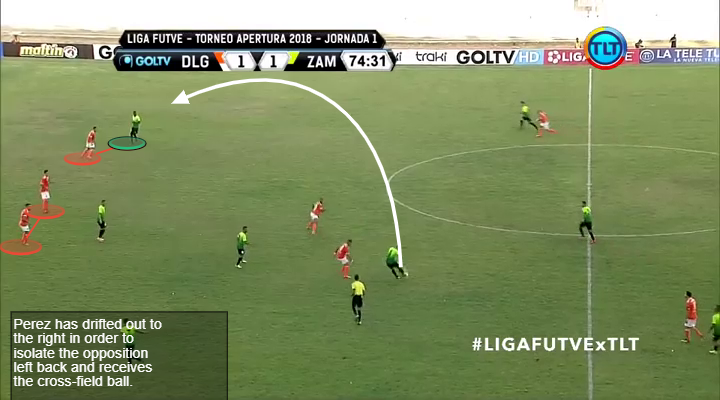 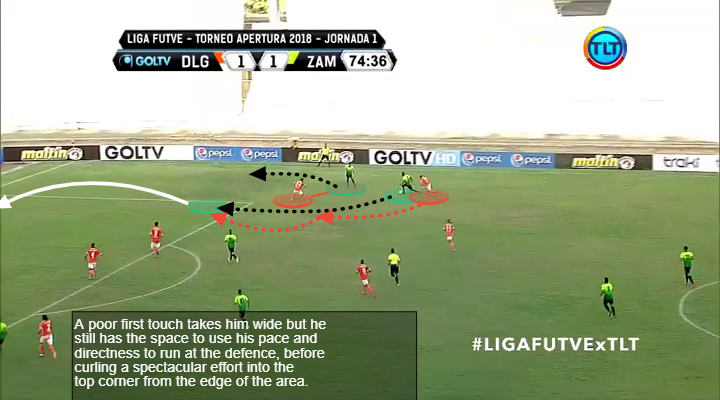 However, he is more than merely a speed merchant and has good penalty-box movement and decent heading ability too, as demonstrated by the well-taken goal below. 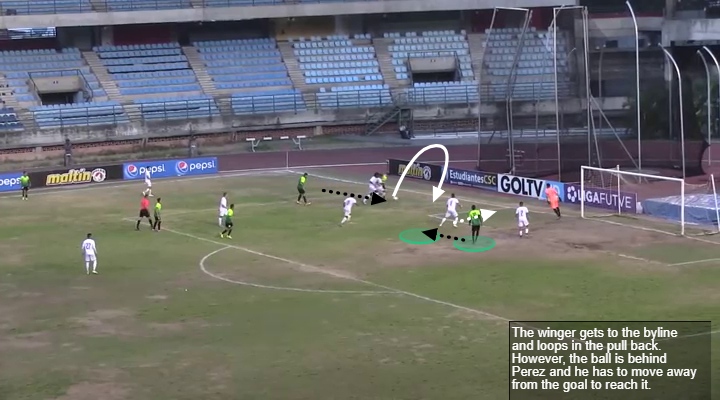 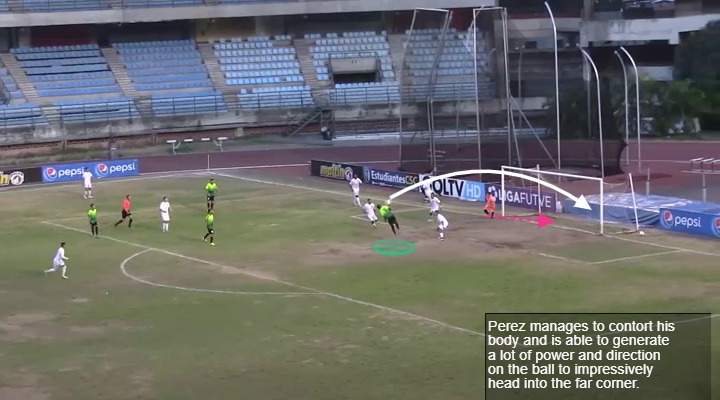 The exciting forward has also accrued experience in the U20 Libertadores, Copa Sudamericana and U17 national team and will now set his sights on some Libertadores action with Colo-Colo. It seems Chile is a popular stepping stone for young Venezuelans and Perez will hope to follow in the footsteps of compatriots Yefferson Soteldo and Romulo Otero.

Another ex-Zamora youngster with a big future is the versatile Christian Makoun. Capable of playing either in the centre of defence or as a defensive midfielder, Makoun has duel Venezuelan and Cameroonian nationality – as well as Belgian citizenship – but has tied his colours to the Vinotinto mast.

One of the youngest members of Venezuela side that finished as runners up in the U20 World Cup last year, Makoun was a product of the Secasports academy and spent a year on loan at Deportivo Tachira before Zamora snuck in and secured his signature in 2016.

Although not a guaranteed starter, Makoun made 13 appearances in La Furia Llanera’s Apertura title win and impressed enough for Juventus to take him on loan with an option to buy amid competition from Real Madrid and Arsenal.

Makoun is physically strong and solid in the air but his cultured left foot, composure bringing the ball forward and passing range gives him the versatility to play in midfield as well as defence. As the examples below show, Makoun has a bit of everything in his locker, demonstrating why he’s such an exciting talent. 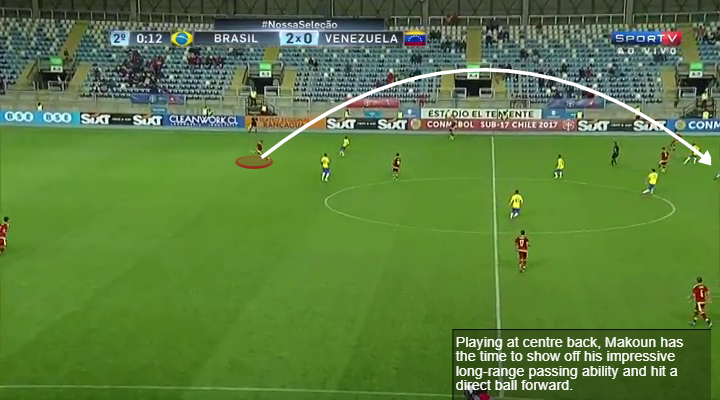 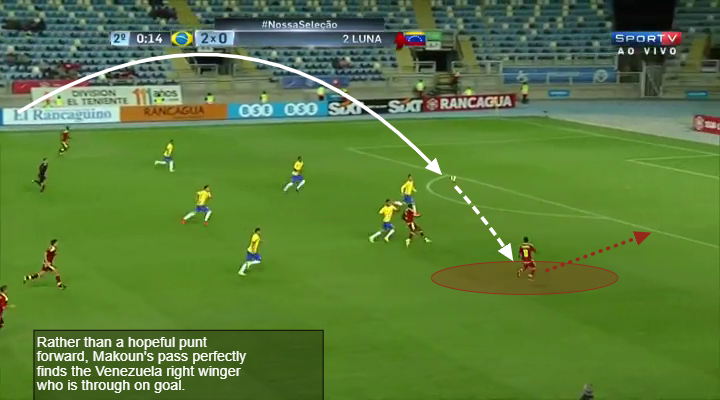 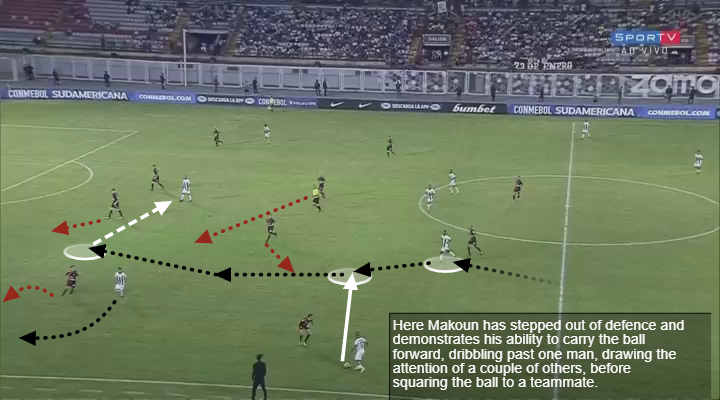 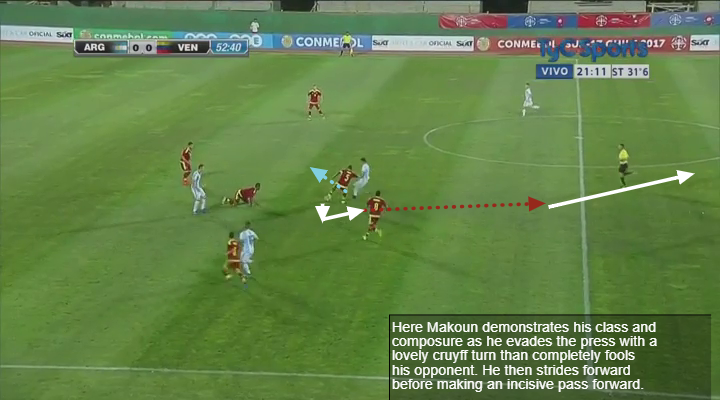 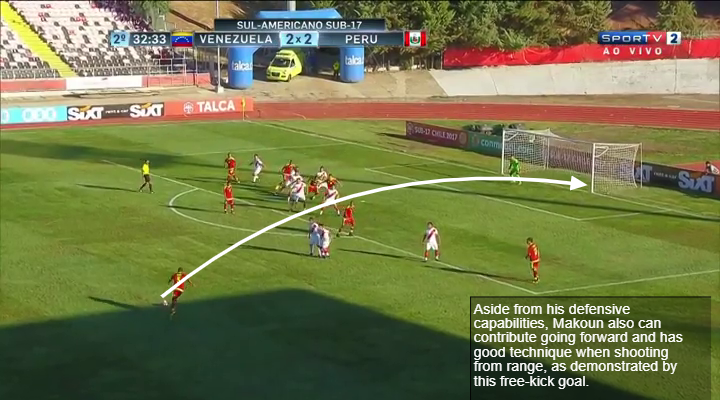 His technique is there to play in either position in the future and it will be intriguing to see what role he grows into. For the time being, Makoun will play for Juve’s Primavera team in Serie C and the expectation is that he will sign a permanent deal but for a disaster.

Barcelona B striker Marques rose to prominence after some stellar showings in the UEFA Youth Champions League last year. The 17-year-old scored four times in five games, including a well-taken brace in the final victory against Chelsea and is highly rated by the Catalan club.

Marques’ family left Venezuela when he was 12 and moved to Spain, where he initially joined the youth ranks of Espanyol before switching to UFB Jàbac i Terrassa after a year. Based in the birthplace of Xavi and a well-respected developer of youth talent, Terrassa allowed Marques to showcase his talent and his goal-scoring exploits attracted Barca, who signed him in June 2017. 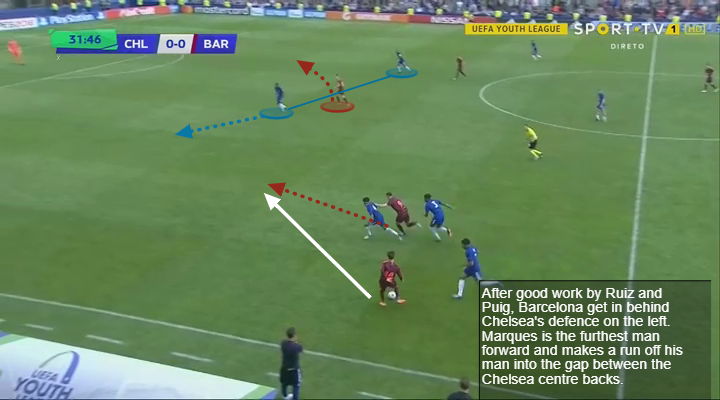 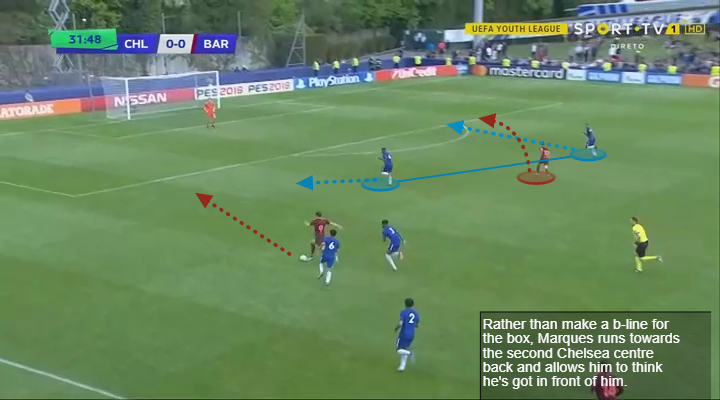 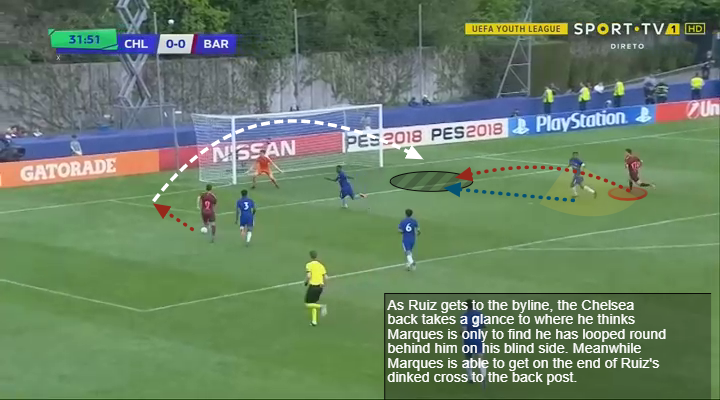 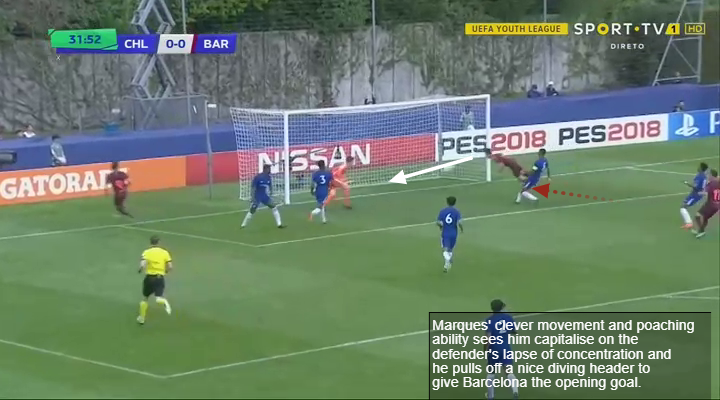 Marques’ decent height allows him to act as a focal point of an attack, either winning aerial duels or holding the ball up to bring others into play. However, what really stands out is the way he comes alive in the penalty box. His off-the-movement, technique in tight situations and ability to get the ball out of his feet to get a shot away make Marques a real opportunist in the area. 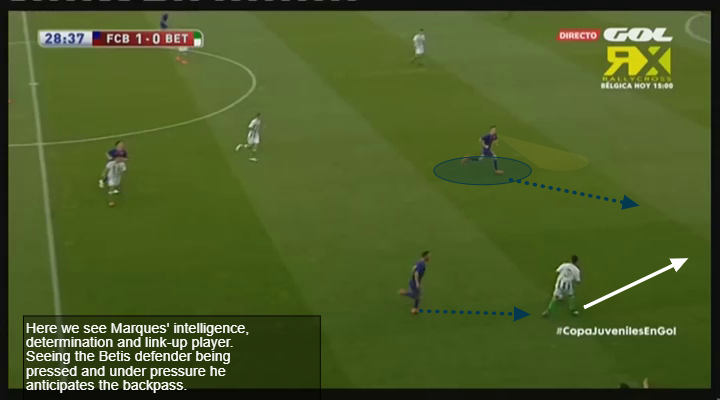 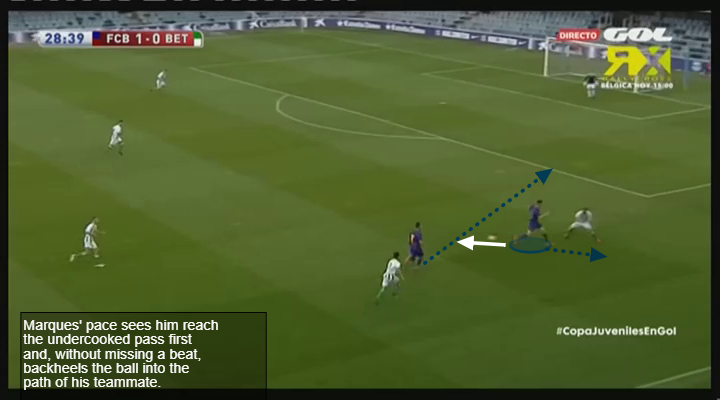 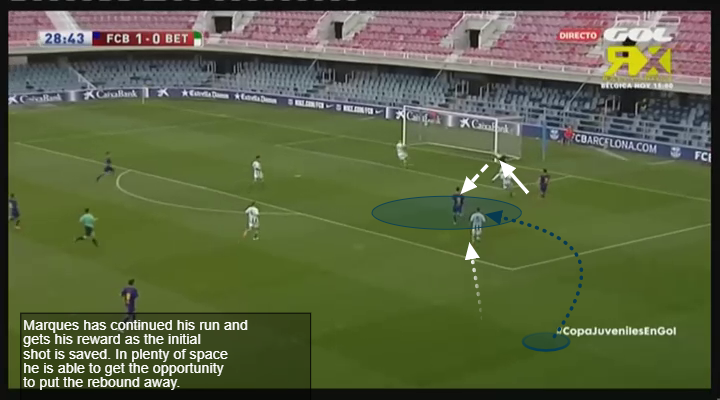 There has, however, been some controversy about Marques’ agent/father not permitting him to return to Venezuela to train with the U20s, which has put his chances of making the Sudamericano in doubt. The player is still keen to represent the Vinotinto and hopefully with some patience and negotiation Marques can become an important player for his country.

In Wuilker Farinez, Venezuela already has one of the best young goalkeepers in world football and perhaps their number one sorted for the next decade. However, Farinez may well have some competition in the form of 17-year-old stopper Carlos Olses.

Born in Caracas, the Deportivo La Guaira custodian has already been called up to the senior national team last year by Rafael Dudamel – a man who knows all about the position – before he had even made his debut for his club. A regular at U15 and U17 level, Olses is clearly being groomed for a role in the senior set up as the Venezuelan football federation look to the future.

Already 1.92m tall, Olses is a formidable barrier for an opposition striker and is very good at staying big until the last minute before committing himself, as shown in the examples below. He also has good reflexes and has worked hard on his kicking ability of both feet – a requisite for any modern goalkeeper. 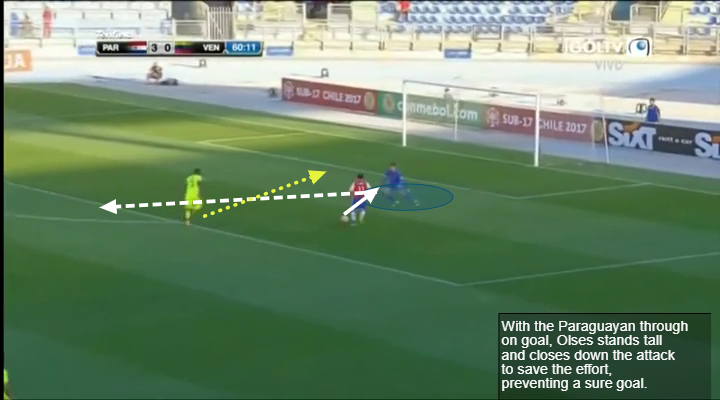 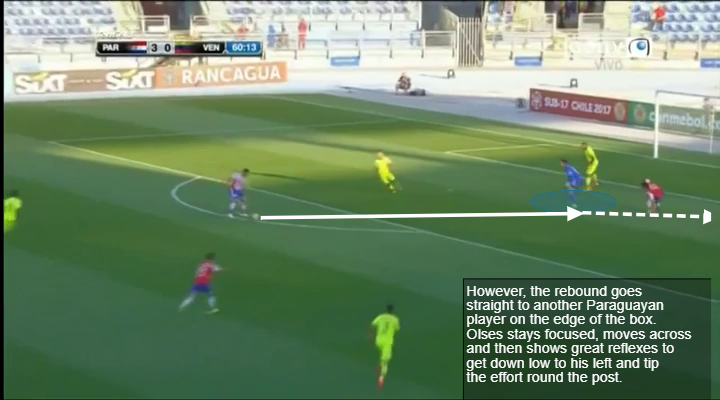 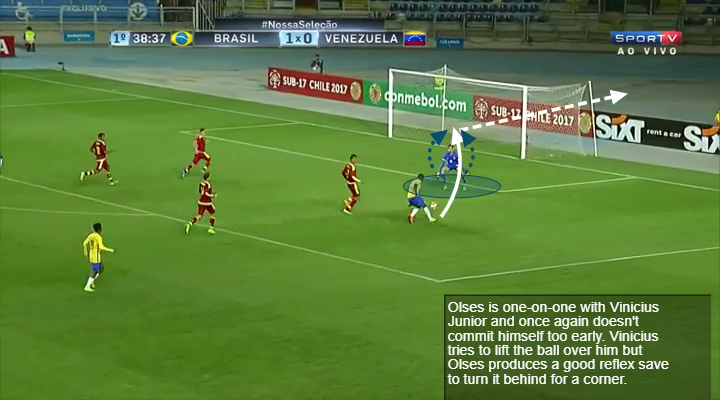 Olses is expected to be the number one for the Venezuela U20s at the upcoming COTIF tournament and at club level will be aiming to add to the three starts he’s managed so far and become a regular for La Guaira.

Another of the side that reached the U20 World Cup final, striker Hurtado made some eye-catching cameos off the bench despite being two years younger than most other players. However, since last October Hurtado has been in limbo over a dispute with his club Deportivo Tachira and his rapid upward trajectory has stalled.

Hurtado initially broke through back in 2016 with 7 goals in 21 games at the age of 16 and then continued his fine form with impressive displays at the U17 Sudamericano and in his first taste of Libertadores football the following year.

Hurtado was then fast-tracked to the Venezuela U20s and didn’t look out of place in his five sub appearances, chipping in with a goal. A big, powerful centre forward with a great turn of pace and decent hold-up play, Hurtado was always willing to run the channels and demonstrated his penalty box poaching abilities too. 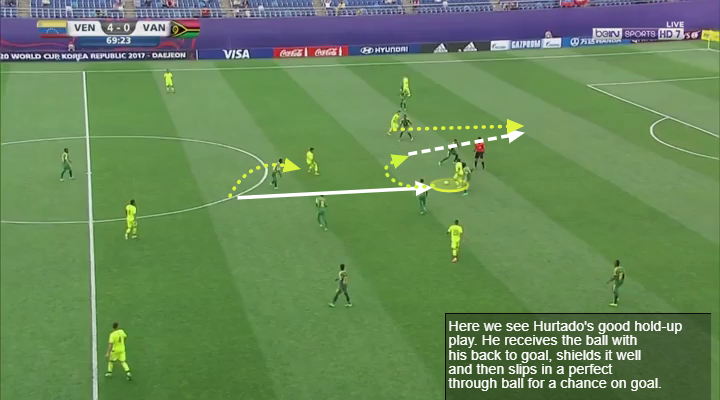 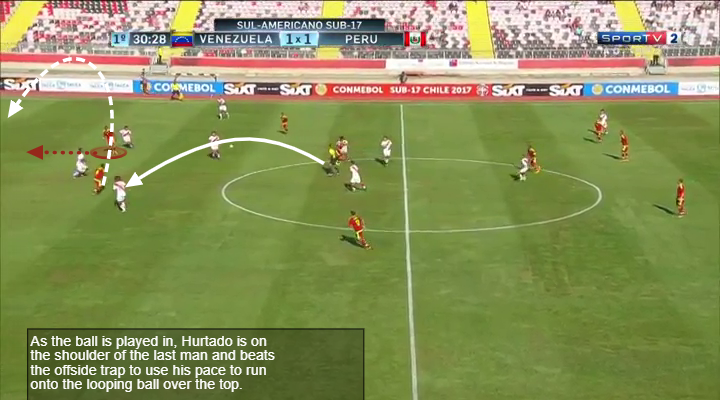 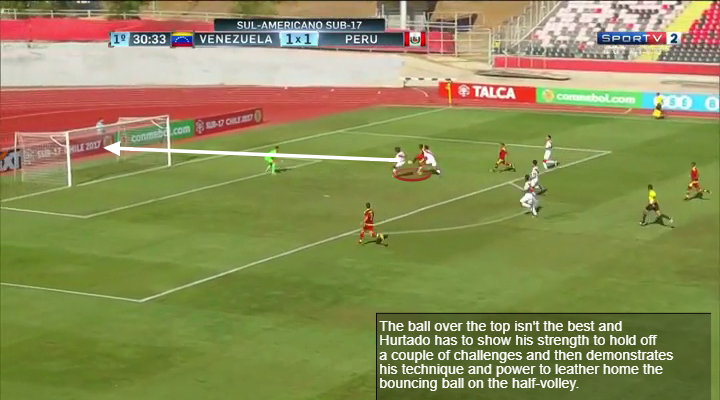 Back at club level after the U20 World Cup, contract negotiations between the player’s representatives and Tachira president Jorge Silva lead to a standoff and Hurtado effectively went AWOL, crossing the border into Colombia. Suspended by the FVF, Hurtado is now being forced to wait out the rest of his contract until it expires at the end of 2018.

Currently on a two-week trial with Club Brugge, Hurtado will hope that this has not disrupted his development and momentum and will be desperate to get playing again. It could be an absolute bargain for the Belgians, while it remains to be seen as to whether there is a way back into the national team set up for the clearly gifted young striker.