What will Fabinho bring to Liverpool?

The signings of goalkeeper Alisson from Roma and midfielder Naby Keita from RB Leipzig may have drawn all the headlines and hype amongst the Liverpool support but it the signing of Fabinho from AS Monaco that could have the biggest impact on the club and their success next season.

For all the media attention that transfers in the modern era get there was still an element of surprise around the Fabinho deal with the news leaking from someone from within the deal a matter of hours before the club presented the Brazilian midfielder in his full kit. That is not to say that this deal should be any less high profile than any of the others that the club has completed this preseason. Fabinho was after all the captain and driving force of the AS Monaco side that reached the latter stages of the Champions League in the 2016/17 season and whilst the likes of Bernardo Silva and Kylian Mbappe chose to leave the club last year Fabinho stayed loyal.

With that said he has recognised that now, in his age 24 season, was the right time to move on to a top club in order to test himself at a higher level. This move will also help the players international prospects with the Brazilian national side having missed out on the squad for the 2018 World Cup in Russia.

Having moved to Europe to join Portuguese side Rio Ave in 2012 his potential was quickly recognised by Spanish giants Real Madrid and he was signed to play in their second team. All of this was as an athletic and attacking right back and it was not until he moved, initially on loan, to AS Monaco that he was used in midfield spending time there and in the centre of defence over the course of his time in France.

This versatility will be key to his performances for Liverpool this coming season but in my opinion, there are two key areas of the field in which he will be utilised with slightly different tactical roles in each.

Fabinho in the DM role

Last season has to have gone down as a success for Liverpool with Champions League qualification coupled with a run to the final of the competition itself. With that said though there was still a sense that Liverpool lacked some genuine quality in midfield. The deal for Naby Keita had already been agreed during the previous season but Liverpool coach Jurgen Klopp decided to double down in this area with the signing of Fabinho.

Whilst Keita will play almost exclusively as an ‘8’ at the club Fabinho has the versatility to play either alongside Keita as the second ‘8’ or behind as the ‘6’ in Klopp’s favoured 4-3-3 system. 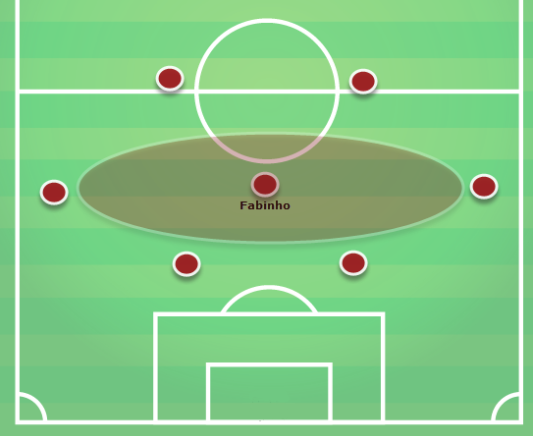 In this role, Liverpool will benefit hugely from the intelligence and ability to read the game in the deeper areas. He moves well from the centre of the field to both sides of the field to cover for his fullbacks when they move up into the attacking phase. This will make Liverpool instantly more secure when the opposition looks to make quick transitions from defence to attack. 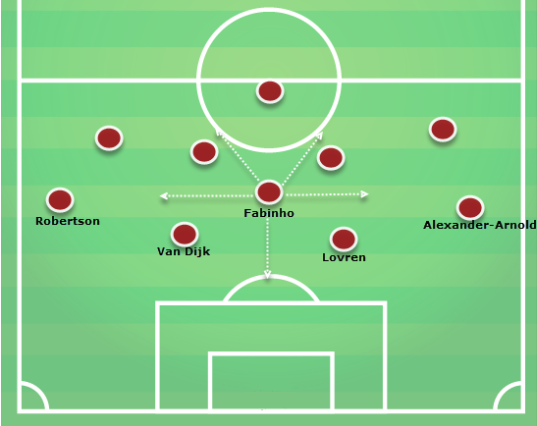 Sitting as the ‘6’ with the other side in possession Fabinho will offer excellent central cover to the back four and sides will find it very difficult to penetrate through the central block of Liverpool whilst they are attacking. Perhaps more importantly though Fabinho has the athleticism to move across to block passing lanes across the width of the field or to step out to press when the opportunity should present itself.

As a purely defensive force, Fabinho is a force to be reckoned with.

It is in the attacking phase, however, that Fabinho has the most to offer to Liverpool whilst playing as the ‘6’ with his flexibility allowing him to support the build-up and the attack in a number of different ways. There are two in particular that I think we will see from Liverpool next season. 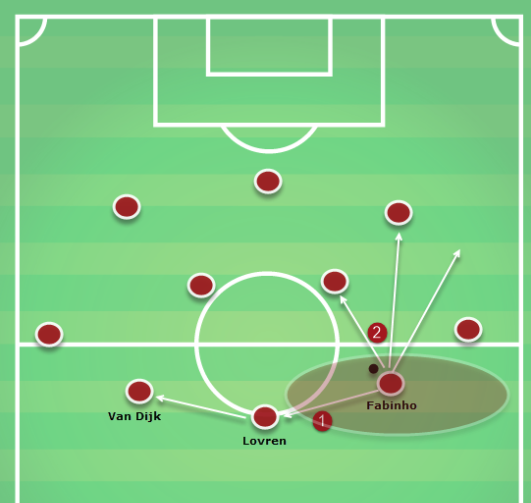 First of all, we will see Liverpool have the option to rotate into a back three in possession of the ball with Fabinho dropping into the right-hand side and Virgil Van Dijk on the left. These two will be primarily used to move the ball into more advanced areas either by playing vertical passes through the lines of the opposition or by taking the ball and breaking the opposition lines with a run forwards.

By forming the back three in this manner Liverpool also release their fullbacks to move in to high positions in the field and in turn their wide forwards move in to either the half space or the central areas in order to overload sections of the oppositions defensive structure.

This movement gives Liverpool far greater stability in their build-up play with Fabinho and Van Dijk either having the option to play forwards into the opposition half or to shift the ball across the defensive line to open up more space that they can play forward in to. 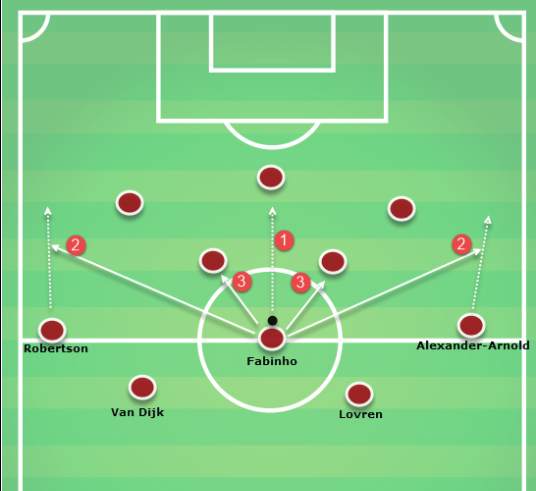 Alternatively, we will see Fabinho retain his central position when Liverpool are in their attacking phase. This time in the build up the fullbacks will be more balanced with only the near side (side of the field where the ball is located) fullback moving forwards to support the play situationally whilst the far side fullback holds a deeper position, most likely on the same line as Fabinho at the base of the midfield.

Once again the versatile skill set of Fabinho will come in to play in these positions with his ability to either play short combination passes to his more advanced midfield players or alternatively carry the ball himself beyond the midfield line into the final third of the field. This gives Liverpool the flexibility to overcome almost any defensive structure that they will face this coming season.

For those of you who are interested in the tactical side of the game, you most likely spent some time in the 2017/18 season watching the Napoli side coached by the Italian Maurizio Sarri. His side played some of the best football in the World last season despite failing to beat Juventus to the Serie A football and despite the headlines going to the likes of Jorginho, Lorenzo Insigne or Dries Mertens one of the most important players in the side was the Brazilian midfielder Allan. Allan played as one of the ‘8’s and effectively shielded the more creative Jorginho was one the ‘6’ in the team. Whilst Allan was perhaps limited in an attacking sense his ability out of possession and his counter-pressing allowed Napoli to win the ball back in their opponents half time and time again, We could well see something similar from Fabinho. 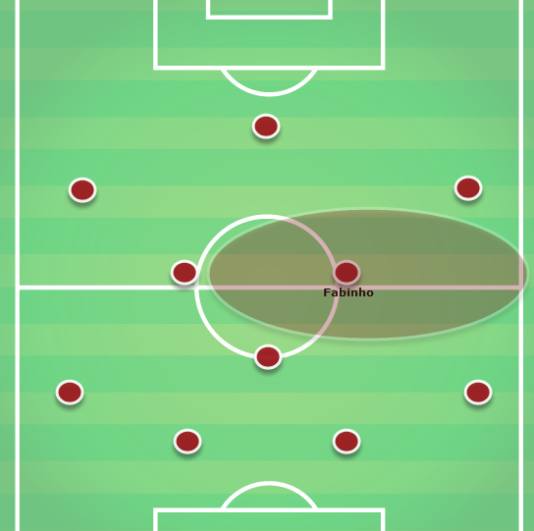 I would expect that when played as the ‘8’ we will see Fabinho on the right side of the midfield with Keita offering balance on the left. The true question will surround who Klopp will use as the creative passer as the ‘6’ in this situation. Whilst Jordan Henderson could well continue in the role I have long thought that the Dutch midfielder Georginio Wijnaldum would be well suited to the role of a creative ‘6’. 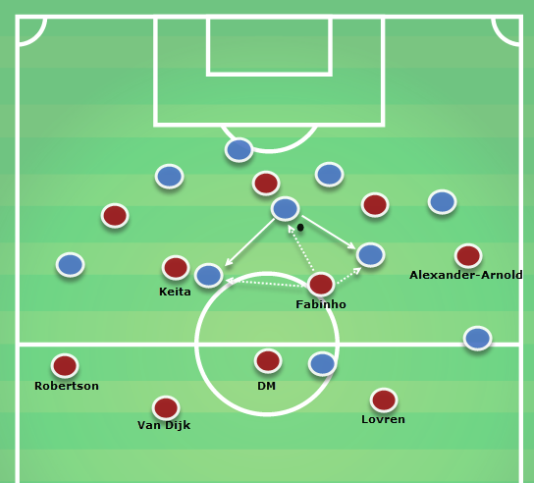 The presence of Fabinho as an ‘8’ for Liverpool next season will give a sense of security to the team in the attacking phase. The fullbacks and wide midfielders will be able to move forward into the final third safe in the knowledge that they have protection in behind them.

When the opposition do win the ball back as I have shown above and if they try to shift the ball forward through the midfield they will find Fabinho to be a counter-pressing machine. Once again his athleticism will come in to play with his ability to quickly press the man who regains possession or to wait and press the first ball as the opposition look to transition into the attack. With his tactical intelligence and ability to read the game Fabinho will provide a fierce opponent to teams who want to play out through the thirds in this manner.

I expect Liverpool to have a fantastic season this year. They have strengthened the areas of the field in which they were weakest last term but in doing so they have signed players of real quality.

Fabinho has been a captain and a leader everywhere he has gone and whilst this can be attributed to his personality in and around the dressing room it is also important to note that he is a leader on the pitch. I would expect that Fabinho will quickly become one of the Liverpool fans favourite players, it is only a matter of time.