Arne Maier is one of the most promising talents in German football.

After giving his Bundesliga debut for Hertha Berlin in 2017, he won the silver “Fritz-Walter-Medaille” in 2018, following awardees like Neuer, Max Meyer and Timo Werner. Having already played 18 Bundesliga matches for Berlin, the €7.5 million worth talent might recommend himself for greater tasks in the upcoming season.

In the following, we will display Maier’s strengths and weaknesses to evaluate if the German midfielder will be able to succeed on the international football stage.

The young midfielder is the paragon of a “box-to-box player”. His solid defensive skills paired with his ability to progress the ball up the pitch might make him very valuable in the future.

In lower areas, Maier is able to control the game with short and highly precise passes. This can be proven by his pass completion rate of 83.3% in 17 Bundesliga matches last season. With his solid body (183cm, 79kg) and clever positioning between ball and opponent, he has a good pressing resistance. This can help in build-up play to gain more time for the creation of new passing lanes.

Further up the pitch, the youngster connects midfield and attack with passes between midfield and last line of the opposition. Thereby he is already a pivotal point of the Berlin midfield when it comes to penetrating the opponents’ midfield. Situationally, the youth international joins the attack with deep runs or covers the attack in a central position. With his tactical competence, Maier keeps the balance between defence and offence.

Due to these abilities, Arne Maier played for Hertha mostly as a central defensive midfielder. However, the Bundesliga player is quite flexible and could also fit in a 4-1-4-1 system playing in the centre of the midfield-four. One can even describe him as a playmaker. However, he does not pull strings on the typical central offensive midfielder position but more deep-lying. 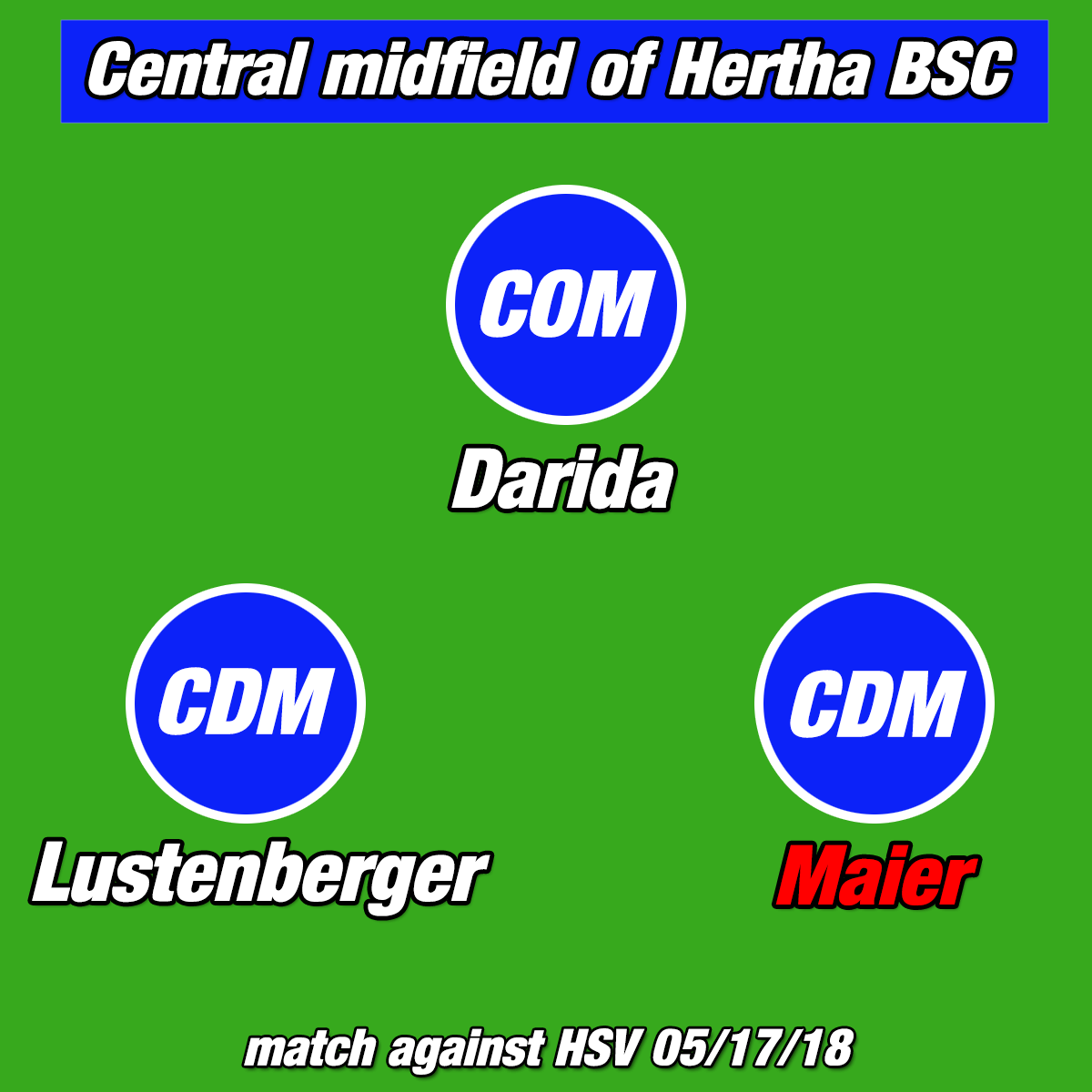 Since Pal Dardai deploys a 4-2-3-1 system, Maier mostly acts as a central defensive midfielder. Thereby, the head coach takes advantage of the physical strengths of Arne Maier who is a robust and dynamic player at once.

Having reached the final third Maier is a good address when it comes to the creation of goal scoring opportunities. His tight ball control allows him to keep possession in tight spaces.

He always searches for a way to penetrate the last line and for space to exploit in behind.

Furthermore, the Hertha player already showed more than once that he has the ability to score with long distance shots.

Moreover, the young Berlin player showed his tactical intelligence in defence the last season. Maier often uses his cover shadow to close gaps in the back-four. Thereby he can intercept through passes or crosses. 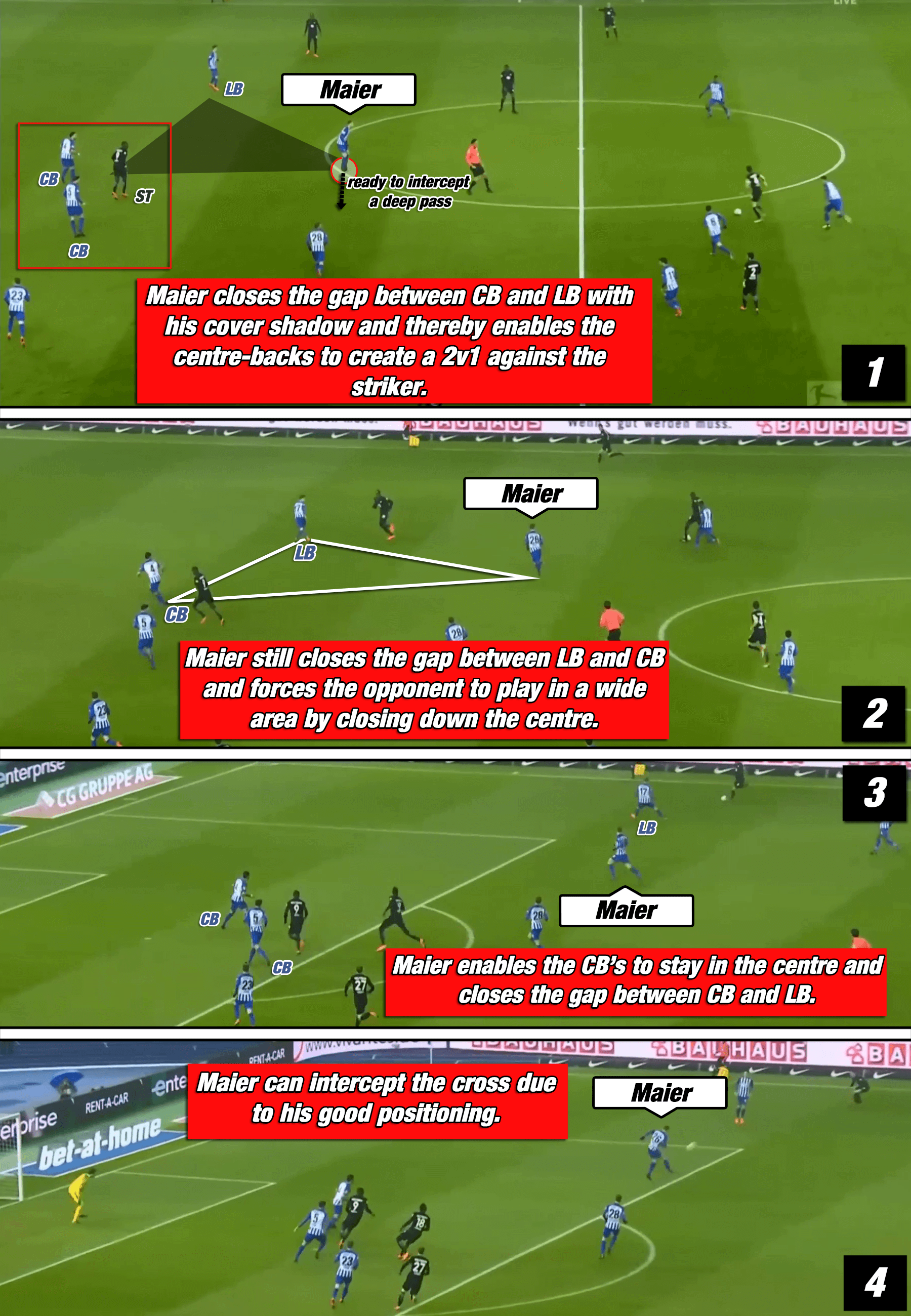 He does not only use his cover shadow to help his teammates but also to cut off passing options in the centre.

Although Arne Maier seems to be highly developed for his age, there is still potential for development.

Firstly, Maier misses good timing in aerial duels and often leaves the ground too late which leads to a rate of only 33% won aerial duels. Even winning a duel, he lacks orientation or precision to ensure possession for his team. 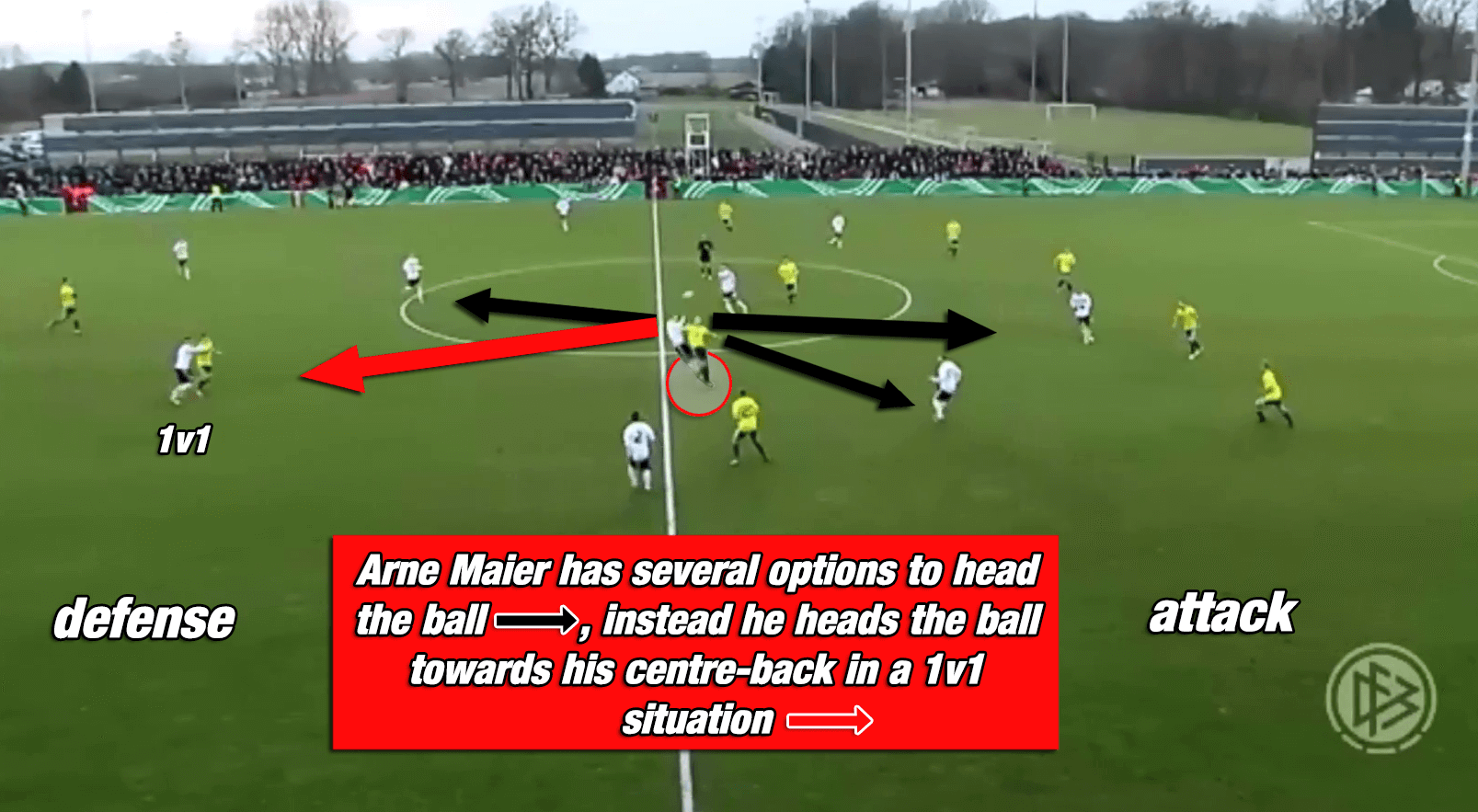 Secondly, the Herthaner can improve on dispossessing the opponent in defending duels. Mostly, he is able to prevent the attacker from playing forward passes or even clears the ball but cannot regain possession for his team though.

All in all, Arne Maier is very helpful in build-up play, in organized moments of defending as well as to threaten the goal. It will be interesting to see which positions he will play in the future, as the midfielder is very flexible and has got much more offensive capability to show.

The next season of Maier will be indicatory for the future of the German talent. Whether the Herthaner can continue his path through all national teams remains to be seen.

However, the 19-year old has a lot of potential and seems to have done the breakthrough on senior’s level already with one foot. We can look forward to seeing Arne Maier in the Bundesliga season 2018/2019, maybe even as a first-team regular at Hertha Berlin.

Check out other analysis pieces on young players like Jadon Sancho and Justin Kluivert.