Predictably, the clash against Peru was going to be a tough game for Les Bleus like the one against Australia. Nevertheless, Peru were relying on their physical strength much more, but they try to play with combinations throughout. Thus indicating some changes in the French line-up.

On the other hand, Deschamps did not have to be afraid of Peru, because France had not lost against a South American team since Argentina in 1978. Which means they won three times and drew four times. These are the facts that we have to know before the match. Let’s see what happened in the clash. 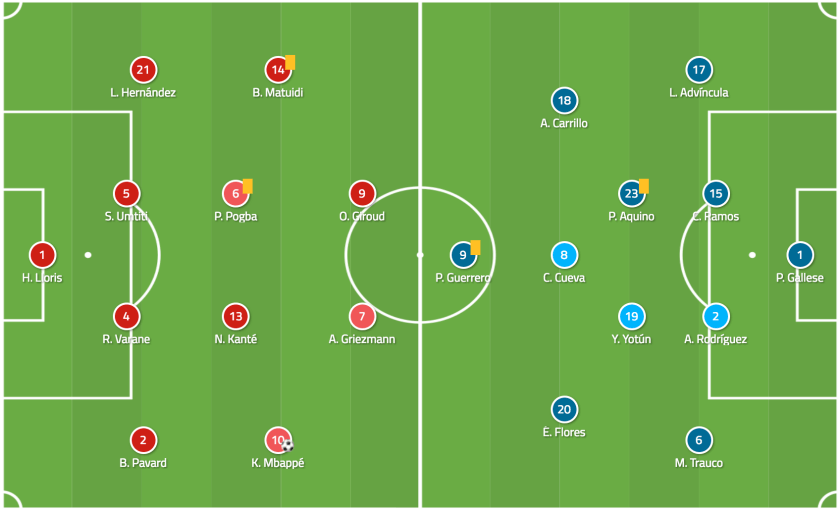 One of the most interesting aspects of this game that how Deschamps adjusted his formation and tactics to the opponent. As likely to have done, he replaced Tolisso with Matuidi to bring some strength to the midfield. In addition, he could not leave out Giroud, who did so well against Australia. Also, Giroud would provide something that Dembele could not. With Giroud on board, France can rely on long balls and volleys due to his ability.

With the ball only Kanté and Pogba were in the same unit, Matuidi a bit higher, occupying mostly in the left half-space. He usually stays in narrow, thus Lucas Hernandez gave width to the team, but when it came to a defence he tracks back and formed a 4-3-3 or at some point 4-4-2. Evidently, Deschamps make a fluid and flexible system.

There was some differentiation between the two sides of the France team. On the left, Lucas Hernandez has to play alongside the whole left wing, which contains joining to attacks. On the right side, Pavard mostly stayed in deeper areas and let Mbappe attack that side. Pavard only played in a supporting role, while Mbappe maintained a wide position, nearly to the touchline and made diagonal runs towards the goals in order to take advantage the bigger space, which of course fitted his skills. Although the Peruvian defence immediately tried to closing down him right after he got the ball. 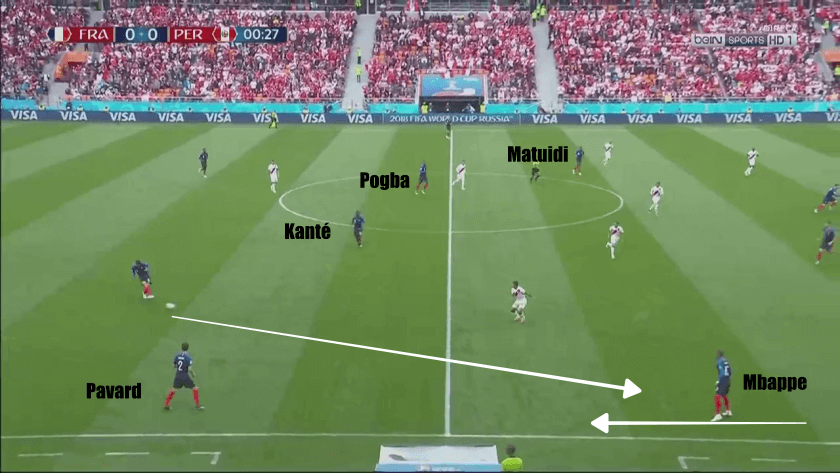 Mbappe dropping deep next to the touchline in order to help the build-up.

Furthermore, Deschamps’ men had other ways to break the defence and make changes. Long balls or volley could be really effective, especially if they had quality on the ball. Therefore, France used this pattern to get behind the Peruvian defence. They often seemed to try and reach Giroud immediately from deep areas. Like these aerial balls. 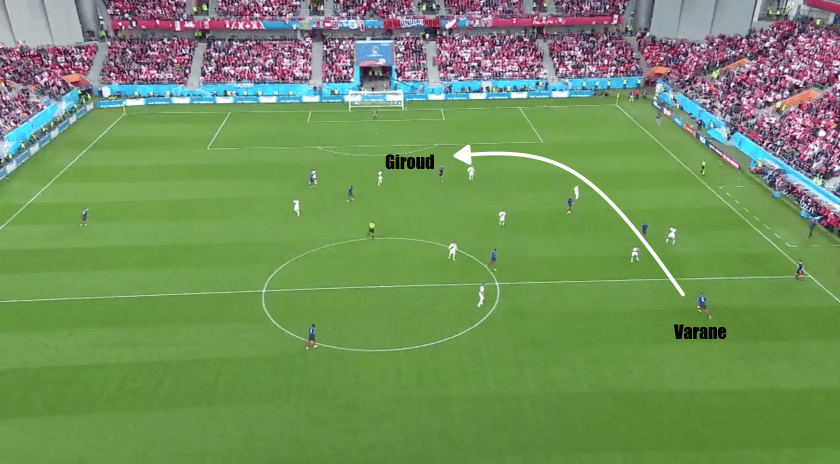 France quite frequently performed decent counter-pressing phases, which led to some promising opportunities, and of course the one which ended up the goal. In this situation below, the French midfielders are pressing the Peruvian ball-carrier, Griezmann and Giroud also joined with a backward press, which means they surrounded the ball-carrier. With this trap, they could retain in possession in dangerous areas and made some quick attacks. 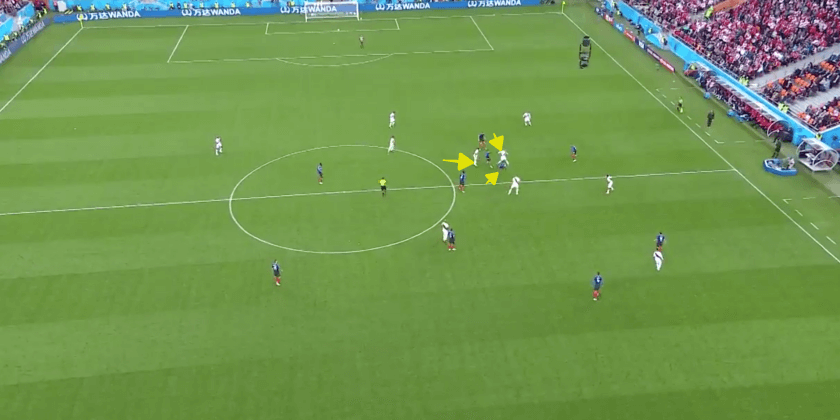 The South American team have not got big names or stars in their squad, but they often played in an entertaining way with combinations. However, their major issue is the lack of chances and goals they created. Against France they did not have too much scoring chances, most of them were low quality, thus they need to improve in front of the goal.

Their scheme is emphasised on overloading one area. Not just simply overloading, but congested in order to have small distances each other, which allowed them to have a connection between the players and play in combinations. Also, this allows them to be effective in counter-press, however, they often lack a switching option, an outlet for penetrating the space at the far side. The other major problem was difficult circumstances where Peru had to act in. Usually, France used tight marking in order to closing down the opponent’s progression.

Moreover, they have some promising situations and also have good attacks in the wings – due to the narrow defence line from France, but in overall, they had in a difficult position, because of thanks to French players abilities that they could handle these situations well. 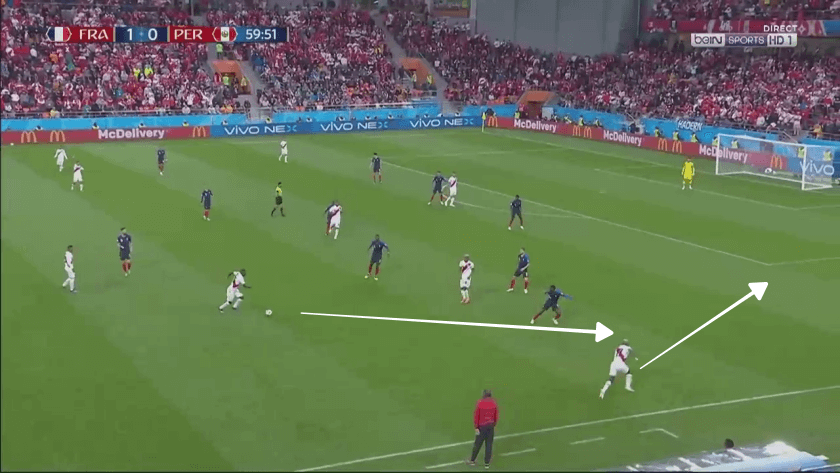 Now, France with the two victories and six points will proceed to the next phase of the tournament without a major problem. However, there is still room for development, but this great squad is able to play better, which perhaps needs to happen if they are about to win the tournament. Unfortunately, for the really simpatico Peru this means the end for now. They will be not among the best 16 teams. Although they showed a decent performance.