France came into the 2018 FIFA World Cup as one of the favourites for the trophy, only behind Brazil, Germany and Spain in the betting odds. Their squad is packed with top-class players, so much so that the likes of Anthony Martial, Adrien Rabiot and Alexandre Lacazette did not make the cut for Russia 2018. However, there have been questions about coach Didier Deschamps’ ability to get the best out of such a talented bunch, with France frequently failing to click as an attacking unit during the World Cup qualifiers. Nevertheless, the sheer weight of ability in France’s locker means that they are sure to be among the contenders barring a spectacular collapse.

Australia had a far more difficult qualification campaign than they are normally used to, as they finished third in their group in the third round of AFC qualifying, behind Japan and Saudi Arabia, which put them into a playoff against Syria; the winners of which would then play against the fourth-placed team from CONCACAF qualifying. The Socceroos came through these tests, beating Syria and then Honduras to book their spot at the World Cup; however, their preparation has been disturbed by manager Ange Postecoglu’s resignation right after qualification was secured. Bert van Marwijk, the Dutchman who took the Netherlands to the final of the 2010 World Cup, was appointed as his successor, albeit only for this tournament. With the two managers having diametrically opposite philosophies on how to set up their teams, it remains to be seen how quickly the squad adjust to the new man in charge, with a mixed bag of friendly results in the lead-up to the tournament.

Both teams would have looked to get off to a good start; France looking to lay down a marker to the rest of the contenders, while Australia trying to show that they belong on the world stage. 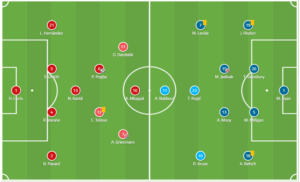 France lined up mostly as expected, with Paul Pogba, N’Golo Kante and Corentin Tolisso in midfield behind a pacy, dynamic front three of Antoine Griezmann, Ousmane Dembele and Kylian Mbappe. The surprise came in the identity of the fullbacks, as Benjamin Pavard and Lucas Hernandez, both converted centre-backs, started ahead of Djibril Sidibe and Benjamin Mendy, although Sidibe was recovering from a knee injury. The lack of width provided from fullback would almost scupper France’s hopes in this game.

Australia had two solid ball-playing midfielders in Aaron Mooy and Mile Jedinak, while Andrew Nabbout started ahead of Tomi Juric as the striker. Tom Rogic was preferred to Massimo Luongo as the #10, while veteran Tim Cahill was on the bench.

Midfields cancel each other out

Both teams had a similar shape to their team, with a 4-2-3-1 when attacking shifting to a 4-1-4-1 during defensive phases. This meant that the players were marked man-to-man across midfield; the holding midfielder picked up the opposition #10, while the flanking midfielders marked each other. The wide players and full-backs were direct opponents as well, leading to the centre-backs being the free players in this game.

The pass maps for both teams, provided by @11tegen11 using Opta data, bears this out as well. Australia were generally poor throughout the game, struggling to get the ball into midfield even though their centre-backs had the majority of their share of possession. France, on the other hand, had capable ball-playing centre-backs in Samuel Umtiti and Raphael Varane. However, as the pass map shows, both of them tended to shift the ball out wide to their full-backs, instead of stepping up into midfield and trying to pass through. Umtiti did attempt this a couple of times in the first half, trying to find Griezmann or Mbappe with passes into feet, but this was a rare occurrence and contributed to a lack of creativity or nous from midfield in this game. 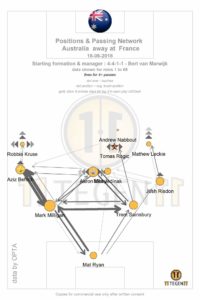 Over the last few years, pressing has become one of the most widely accepted tactical evolutions in football. Most top sides now employ a press to some degree or another, with Mauricio Pochettino’s Tottenham, Jurgen Klopp’s Liverpool and Julian Nagelsmann’s Hoffenheim sides using the tactic as their primary attacking and defending philosophy. However, this is difficult to adapt on the international stage, as players and coaches do not get enough time together to implement nuanced and complicated tactical tweaks. This game was a good example of this, as both sides completely sat off each other, allowing the ball to be brought into midfield before attempting to pressurize the man in possession.

This, combined with the midfield configurations for both sides, had two potential effects on the game. Firstly, as stated earlier, the centre-backs had all the time in the world to step up and pick a pass, but neither pair did so consistently. Secondly, allowing the man on the ball so much time meant there was always an opportunity for him to pick out a run, and the opening goal came from such a move, where Pogba was under no pressure as he picked a perfect pass for Griezmann, who was brought down for a penalty.

France selected an extremely fluid and quick front three, with all three of Dembele, Griezmann and Mbappe able to play across the forward line. During the game, Dembele was usually on the left, with Griezmann and Mbappe alternating their positions between centre-forward and the right wing. The best way to exploit these players, as well as the playmaking ability of Pogba behind them, was surely to ask them to stay relatively wide, in order to stretch the Australian defensive lines, which would, in turn, make space for Pogba and Tolisso to create from midfield. However, France’s three attackers kept coming inside when out wide, crowding already congested central areas and providing the Socceroos with a smaller area to defend. They would often run into traffic and lose possession, with this contributing immensely to Les Bleus’ inability to break down the Australian team. There was also a lack of dynamism in any of their forward runs, with nobody trying to make runs from inside to out to drag defenders out of position.

An added problem was the lack of width from fullback; while Hernandez and Pavard are good young prospects, they are far more comfortable at centre-back and lack the necessary dynamism and pace to overlap regularly. Further, if Deschamps is to persist with this formation and these players, then Olivier Giroud must start. His ability to combine with onrushing midfielders through one-touch passes and flicks is rare, and it was demonstrated perfectly for Pogba’s winner, as he ran onto Giroud’s deft touch before lifting the ball over Mat Ryan. A surfeit of players in central areas would suit the Chelsea man, as he could play off them and provide a focal point for the attackers to get into the box. Deschamps and his team got away with a win against the Australians, but he has a lot of thinking ahead if he wants his side to go deep in this tournament.

If you enjoyed this, please check out our analysis of the Portugal vs Spain, Morocco vs Iran and Egypt vs Uruguay games.