After the disappointing draw in the first game, Brazil wanted to bounce back and show their strength against the defensively well-organized team of Costa Rica. However, in a game in which Brazil dominated they could score the two deciding goals in injury-time. Over the course of the 90 minutes, Costa Rica´s defence was a big challenge for Neymar and the Brazilian team. I am going to explain some issues Brazil had in that game and why Costa Rica was so stable defensively.

Oscar Ramirez selected a 5-4-1 against Brazil in order to control the dangerous attackers of the five-time World-champion. While Tite lined-up his team in the usual 4-3-3. Especially, Neymar had the pressure of performing well in order to get his team one step closer to the next round. 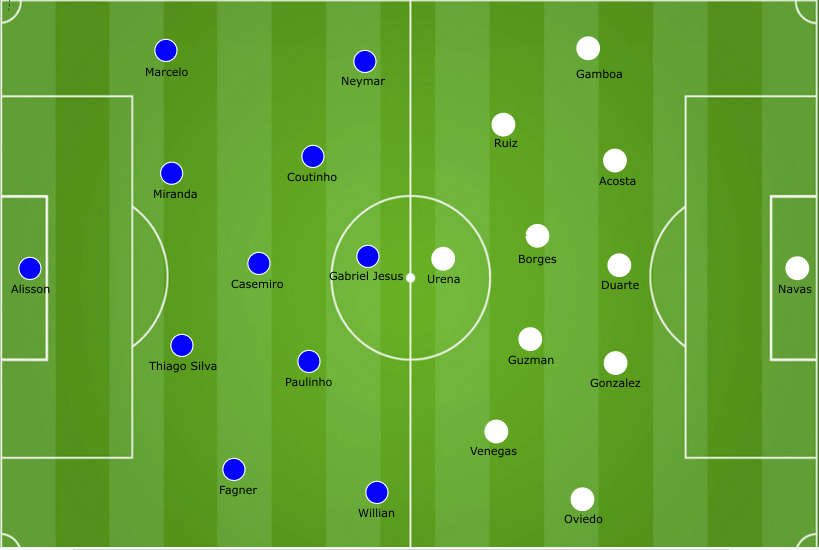 In possession, Brazil tried to dominate and create opportunities by bringing their best players in 1v1 situations or by passing the ball in the space between defence and midfield of Costa Rica. However, they struggled to get the ball between the lines of Costa Rica because their individual defending was on a high level.

In possession, the central defenders were supposed to build-up from behind. Due to the deep defensive block of Costa Rica, they rarely faced pressure. Casemiro as central midfielder had his tasks defensively and therefore functioned only as a passing option. The main initiator of any offensive action was Coutinho who dropped deeper into the left half space. From there he could build-up the attacks without facing any pressure. 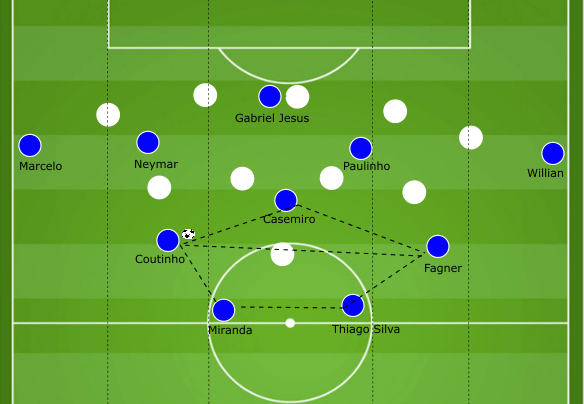 On the other side, Fagner played more like an inverted fullback. Therefore, Willian in the first and Douglas Costa in the second half positioned wider in order to stretch the defence. With the centre-backs and the three-man line in midfield, Brazil was hard to beat through counter-attacks. This focus on stability leads to a lack of risk-taking speed in their attacks.

But, that three-man line existed only for a short period of time. Normally, one of the players would push higher while the other two stayed deeper in order to stop Costa Rica if they could intercept a pass and counter-attack. For instance, Casemiro moved forward when Coutinho and Fagner played deeper. Therefore, Casemiro created better passing angles. Coutinho and Fagner would usually join the attack when the ball was on their side. Coutinho could create a triangle with Marcelo and Neymar and moved into the space between the lines while Fagner either sprinted behind the last line or positioned wide when Willian moved centrally.

Up-front Brazil created a five-man line. Marcelo usually played wider, and Neymar pushed in the halfspace, especially in the second half Neymar tried to be dangerous inside. However, sometimes Neymar could receive the ball near the touch-line while Marcelo moved into the halfspace to create space for Neymar.

Between Costa Rica´s defence and their midfield, Brazil had two players who positioned constantly there. Paulinho moved higher while Gabriel Jesus waited at the edge to offside for passes behind the lines which were rarely even playable due to the deep positioning of Costa Rica.

Offensively, the biggest problem for Brazil was to break through Costa Rica´s lines. Due to four players who positioned deeper in order to prevent counter-attacks Brazil could rarely create an overload in the halfspace. Usually, three Brazilian players faced four of Costa Rica. Therefore, Costa Rica could play man-oriented on the wing and follow the player in the halfspace while still keeping the centre closed due to the position of their central midfielders. That´s why Brazil rarely got access to the centre. Costa Rica could attack the ball carrier quickly, sometimes even double him. Most importantly they always closed the diagonal passing line into the centre. 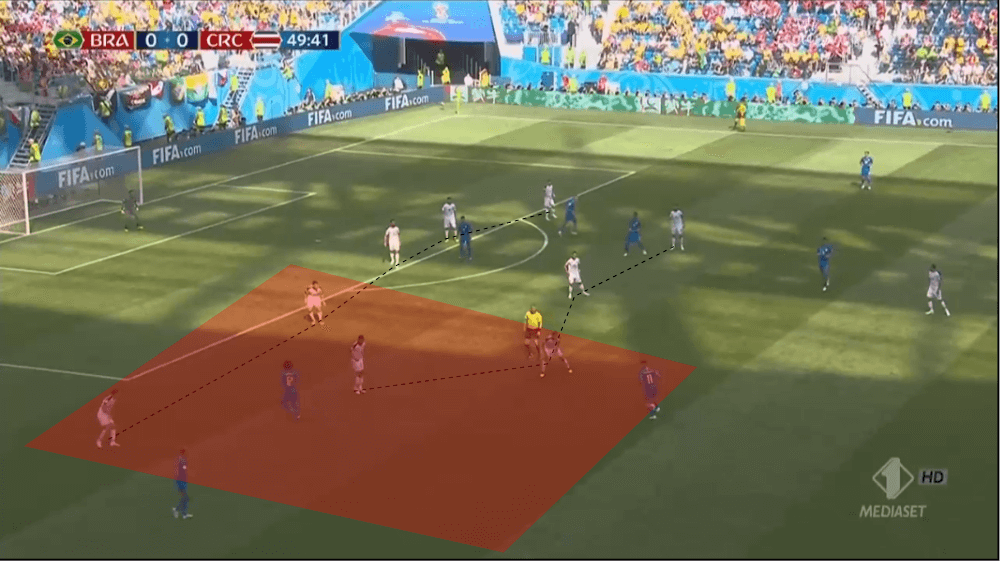 Here, you can see how Tite´s team faced a 3v4 situation on the wing. Borges could pressure Coutinho by moving out of the line which made it impossible for Coutinho to pass the ball between the lines. Bolaños followed Marcelo while the halfback secured the space and could help if Brazil would try a through-ball. As a consequence, Brazil relied on crosses which were effective in the last few minutes because of the lack of energy of Costa Rica but before the crosses were quite ineffective.

After a while the Brazilian players tend to move out of the defensive shape of Costa Rica to receive the ball. Because of the safety-first approach Brazil didn´t have enough players between the lines in the first place. Due to the out-drifting of their offensive players, Costa Rica controlled the centre and Brazil had to attack through the wings. 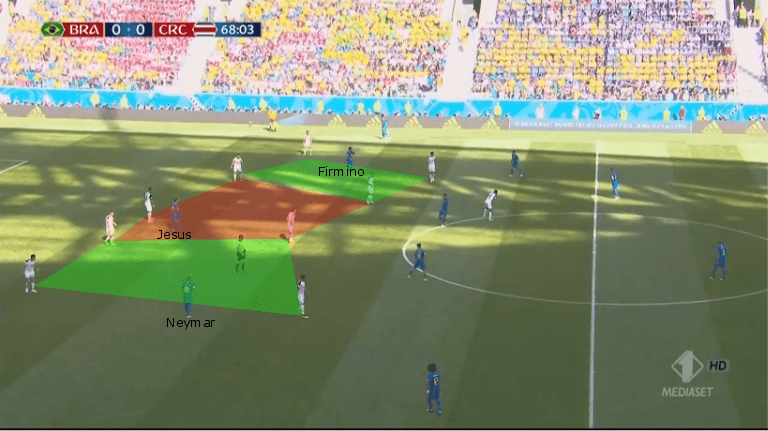 In that scene, Neymar and Firmino faced four players together with the winger (Douglas Costa and Marcelo) that led to the possibility for Costa Rica to close down both players by either pressing them immediately after receiving the ball or by closing the passing lanes, so they could even receive the ball. Neymar, for instance, started his dribbling from the wing or from outside of Costa Rica´s shape. Therefore, they could attack him with multiple players.

Especially, the individual strength of Costa Rica´s players defensively and the good horizontal and vertical compactness of their shape helped Costa Rica to force Brazil to take shots from distance in the first half. In the second half, Brazil played with more speed in the first minutes and was able to switch side more quickly which gave them 1v1 situations especially on the right side. Those 1v1 situations created a quality superiority and Brazil had a few dangerous scenes after crosses.

Due to their immediate regain of the ball, Brazil received more space because Costa Rica wasn´t structured in those moments. Besides that, the few opportunities for counter-attacks were played poorly by Costa Rica. As a consequence, Neymar, Jesus and Douglas Costa received more space and could dribble with speed towards the opponent’s defence. One of those scenes resulted in the big chance for Neymar. In the injury-time Brazil could finally seal the deal. Again, they only could cross the ball in, however, they had enough players in the box to take advantage of their physical superiority which resulted in a second ball in the box which Coutinho used to score.

Brazil had to work hard for those three points. The defensive performance of Costa Rica was huge and made it hard for Neymar, Coutinho and co. to create a lot of chances. Their structure in possession focused on preventing counter-attacks. Therefore, they rarely could overload a specific space to create an attack. In the end, the individual abilities were superior, especially in the second half Brazil was the better team and used their abilities the gain the three points. Over the course of the tournament, Brazil will likely struggle to score a lot of goals against teams defending deeper but the low-risk approach of Tite with five players in front of the opponent’s midfield could help them to control counter-attacks.