Germany began their World Cup defence in the worst possible manner with a 1-0 loss to Mexico. The defending champions looked ragged and bereft of ideas, while El Tri were superb tactically. Joachim Low has stuck to the same philosophy which won him the World Cup and the Confederations Cup; however, it felt as if the Germans were too predictable. Mexico were especially good at shutting down Toni Kroos, ensuring that there was no supply from midfield, before retreating and defending deep in the second half. Die Mannschaft were unable to find the answer to either problem in that game, and therefore a loss against Sweden would eliminate them at the group stage; an unthinkable scenario.

Sweden were efficient in their own 1-0 win over South Korea. The Swedes were compact and organized in defence, with the Koreans unable to get a shot on target, while in attack they were fairly simplistic. Long balls to unsettle the Korean defence, with the second striker looking to win the second ball, was the extent of Sweden’s attacking strategy. They managed to eke out a win through Andreas Granqvist’s successful penalty conversion, but would probably need a touch more invention to get past Germany. 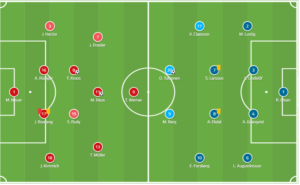 Low reacted to the Mexico defeat by making four changes to his side. Mats Hummels sat out because of an injured neck, with Antonio Rudiger taking his place, while Jonas Hector came in for Marvin Plattenhardt at left-back. The biggest calls were in midfield: Sami Khedira’s ineffective performance meant that Sebastian Rudy played alongside Toni Kroos, while Mesut Ozil was dropped as well, and Marco Reus made his first start at a major tournament since Euro 2012.

Janne Andersson made only one change from the victory over South Korea: Victor Lindelof was fit again, so he replaced Pontus Jansson as Granqvist’s centre-back partner.

The Germany-Mexico game was notable in terms of the tactics El Tri employed to shut Germany down. They pressed high up the pitch, not giving the centre-backs time on the ball, while also man-marking Toni Kroos in his role as the deep-lying playmaker. Germany were incredibly subdued as a result, and one would have thought that Sweden would try to imitate their Latin American counterparts. However, Andersson set his side up in an extremely compact 4-4-2, with a brief to sit off and congest the midfield zone. Sweden’s wingers Claesson and Forsberg would drop off and form a flat, narrow midfield four to deny Germany passage through the centre, while the strikers Berg and Toivonen working to shut passing lanes, rather than press the man in possession.

Kroos and Boateng have a lot of time and space

The effect of Sweden’s lack of pressing was that Toni Kroos and Jerome Boateng had a lot of time on the ball. Kroos was regularly able to receive the ball from his centre-backs and pick a pass without being pressed, while Boateng would often advance into the opposition half to try and play passes into the channels, as can be seen from the images above and below.

The plan for Kroos was not to press him specifically but shut off his passing options into midfield. Sweden were perfectly content for him to knock the ball wide to the fullbacks or play it inside to Boateng or Rudiger. What they did not want was a pass into Muller, Reus or Draxler, and the two strikers worked especially hard to ensure this by blocking passing lanes. This would bear fruit in the first half, as Kroos gave the ball away in the buildup to Sweden’s goal.

Sweden’s tactics are quite evident from the pass map below, provided by @11tegen11 using Opta data: Germany’s midfielders saw very little of the ball, with the exception of Kroos, while Boateng also stepped into midfield often and tried to instigate play. Also note Kimmich’s average position: he is ahead of Julian Draxler and almost level with Timo Werner, who has the nominal striker on the day. 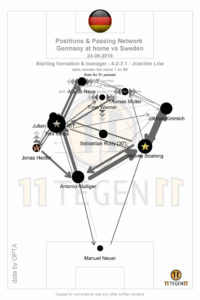 As the pass map provided above demonstrates, Low wants his fullbacks to provide the width, especially Joshua Kimmich on the right. His advanced positioning was exploited very well by Mexico in the first game, yet Low persisted with this tactic for the following reason. It allows Thomas Muller to play centrally, while also creating space for Timo Werner to make runs into the inside-right channel. Muller is at his best in the half-space between the opposition centre-back, full-back and midfield, and with Kimmich stretching play, he could come inside to combine with the centre-forward, as shown by the image below: 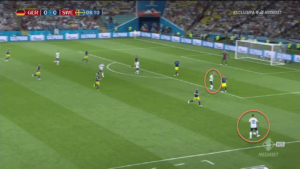 However, this system also has obvious downsides. It leaves Germany extremely short-handed at the back, which was quite evident during the Mexico game, and here too. Sweden often had a 2v2 or even a 3v2 if they managed to successfully transition, with both Boateng and Antonio Rudiger forced to cover huge amounts of space behind them. This was best demonstrated early in the first half when Rudiger lost the ball with on the half-line with nobody behind him for cover; Sweden broke and only a last-ditch challenge by Boateng prevented a goal, but it should have been a penalty as Berg was brought down illegally.

While some late Toni Kroos magic may have secured a vital win for Germany, it does not hide the structural flaws with this setup. Low should be concerned that his side have now struggled against two completely different systems and shown similar defensive frailties against both: the worst possible mix going into the knockout stages of the World Cup. Germany should beat South Korea to make it to the round of 16; however, any potential opponents will have noted their defensive vulnerabilities and struggles for attacking cohesion, and there may just be a potential embarrassment waiting unless Low tightens things up.

If you enjoyed reading this, please check out our analysis of Serbia vs Switzerland, France vs Peru and Brazil vs Costa Rica.

On Sunday, we saw the biggest game of the season play out between first-placed Manchester United and second-placed Liverpool in […]

Manchester City had sailed away in the title race by the time they hosted their neighbours at the Etihad, aiming […]