Brazil was widely tipped as a potential winner of the FIFA World Cup 2018 in Russia and it’s been so far so good for the Brazilians. After topping a difficult group, they sealed their passage into the last eight by beating Mexico 2-0. This strong nation will class anything other than a trip to the final as a failure. This leaves the side under a lot of pressure to beat Belgium and advance into the semi-final.

Head coach Tite will have a plan though. The coach has done brilliantly since taking over the reins and Brazil always look well-prepared. Prior to their clash with Belgium, I’ve looked at two key areas where Brazil can look to hurt their opponent.

Expose Belgium on the wings

When looking through Belgium’s games, and how they’ve conceded chances, it became clear that they have some issues regarding how they defend wide areas. Especially the space between centre-back and wing-back. With such an attacking player as Yannick Carrasco playing as a wing-back, it’s clear he will be an attacking asset rather than defensive. Sometimes he is caught high up the pitch leaving lots of space to exploit around Jan Vertonghen. Vertongen is a fantastic player but he’s not the quickest. As Japan showed, his lack of pace can be exposed.

In the image below we see the build-up to Tunisia’s second goal versus Belgium. The ball is played between the left-sided centre-back and the left wing-back. A Tunisian player attacks the space in-behind and cuts it across for a teammate to score. 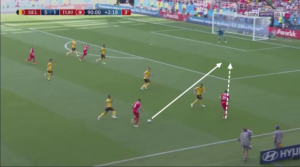 As mentioned above, Japan exposed Vertonghen’s lack of pace when scoring their opening goal. First of all, Japan found plenty of space in central midfield, which I’ll discuss later. Belgium’s central midfielders, Witsel and De Bruyne, are overplayed and Japan progresses the ball into a dangerous position. Note the high position of Belgium’s left wing-back in the bottom left corner.

Below, Japan winger Haraguchi makes a run into depth behind Vertonghen. The ball is played through and Vertonghen fails with his attempted clearance, leaving the winger free to put Japan 1-0 up.

With Neymar often staying high up the field on the left when Brazil are defending, he will be a great outlet to isolate the Belgian wider centre-backs. Alderweireld on the right is more mobile than Vertonghen but would struggle in 1vs1’s against Neymar. On the opposite side Willian would relish the chance to isolate Vertonghen and run at him. Central centre-back Kompany would also be occupied with Gabriel Jesus and won’t be able to provide the necessary cover quickly enough.

It seems the wings will, therefore, be a key area for Brazil to hurt Belgium. The wing-backs’ attacking nature and the centre-backs’ limited pace could be the way for Brazil to find goals. But there are other areas where they can hurt Belgium too.

Midfield runs could be key for Brazil

Kevin De Bruyne has been praised to the heavens for his performances at Manchester City this season. Rightly so, he’s been brilliant. In Belgium’s 3-4-3 though, De Bruyne plays in a more defensive position, just in front of the centre-backs. He was badly exposed against Japan. I’ve highlighted De Bruyne below, just before Japan made it 2-0. He has jogged back after an erratic pressing action. At this moment he’s simply walking and doesn’t make an effort to get back goalside of the ball. 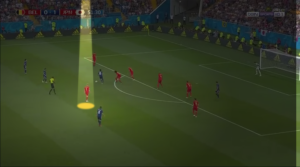 Now, Inui prepares to shoot. Witsel makes an effort to block the shot. De Bruyne, however, doesn’t even try. He simply watches Inui make it 2-0. This whole action screams bad attitude or poor defensive nous. However, we’ve all seen De Bruyne play with intelligence and with dedication in the past, so this must have been a one-off. 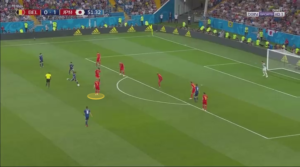 Belgium’s issue, though, is a midfield of De Bruyne and Witsel concede too much space. This allows opponents to pick up positions in open space to receive passes. If you remember the image a few pictures earlier, you saw how they were positioned vertically from each other. Given the side’s poor compactness defensively, with the front three and wing-backs staying high, this is an issue Brazil can exploit. With Coutinho finding space between the lines before unleashing the front three against Belgium’s back-three, Brazil could be devastating.

A key strength in Brazil’s style, which correlates well with Belgium’s weaknesses, is the runs from midfield by Paulinho in particular. The goal against Serbia, highlighted below, was a case in point. Gabriel Jesus occupies both centre-backs while Paulinho makes a run into depth with his midfield opponent failing to track the run. The ball from Coutinho is perfect too. Now imagine Paulinho making the same run against Belgium. Would De Bruyne have the defensive awareness or attitude required to make the defensive run? This midfield battle will be key. 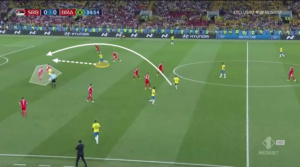 Belgium has a lot of strength and quality going forward with De Bruyne, Hazard, Lukaku and Mertens. They are all brilliant players capable of anything. But there are glaring weaknesses in defense. If Brazil can exploit either the issues Belgium have when defending wide areas or the centre of midfield then they’ll have a great chance of scoring. Thus, a good chance of winning and reaching the semi-final of the FIFA World Cup 2018. It will be interesting to see what happens on Friday.

Read more about Brazil at the FIFA World Cup 2018 here and here.