Sweden’s emergence as a force in the 2018 FIFA World Cup group stage was not foreseen by most football journalists or fans. Their story was made even more tantalizing when they defeated Switzerland — a trendy pre-tournament pick to get far in the competition — with a complete performance. One goal by attacking fulcrum Emil Forsberg was enough to see off the Swiss, who weren’t able to create much substance despite lengthy spells of possession. 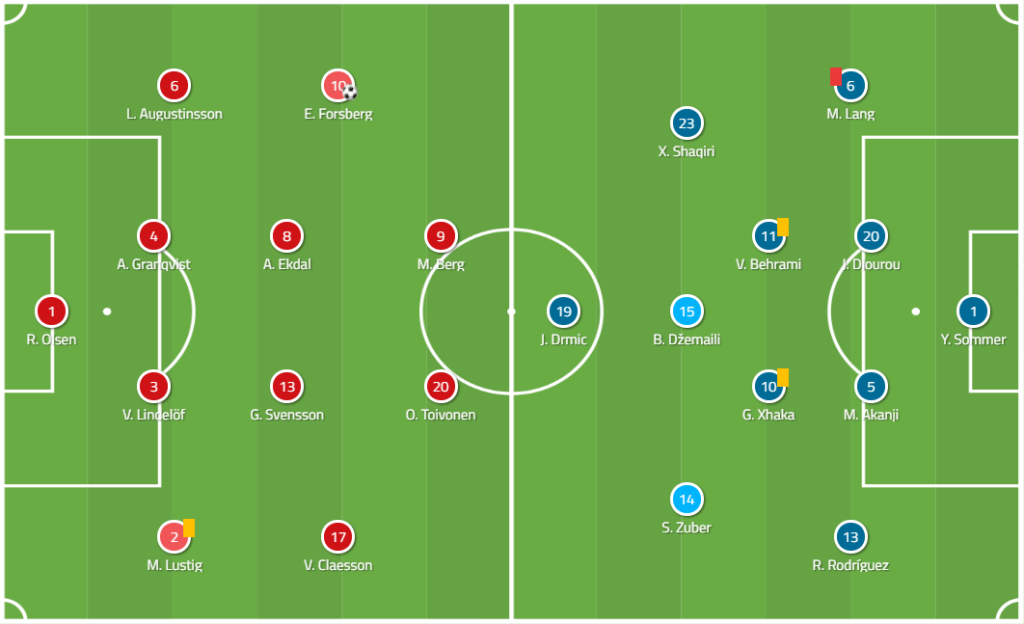 Janne Andersson set up his Sweden side as always: a rigid 4-4-2 when defending. There were no personnel changes except for Gustav Svensson filling in for the injured Sebastian Larsson in a defensive midfield role. Emil Forsberg operated as a mobile left midfielder, tucking inside to aid link-up play. Left-back Ludwig Augustinsson took advantage of this extra space by overlapping consistently, something he’s done throughout the tournament. 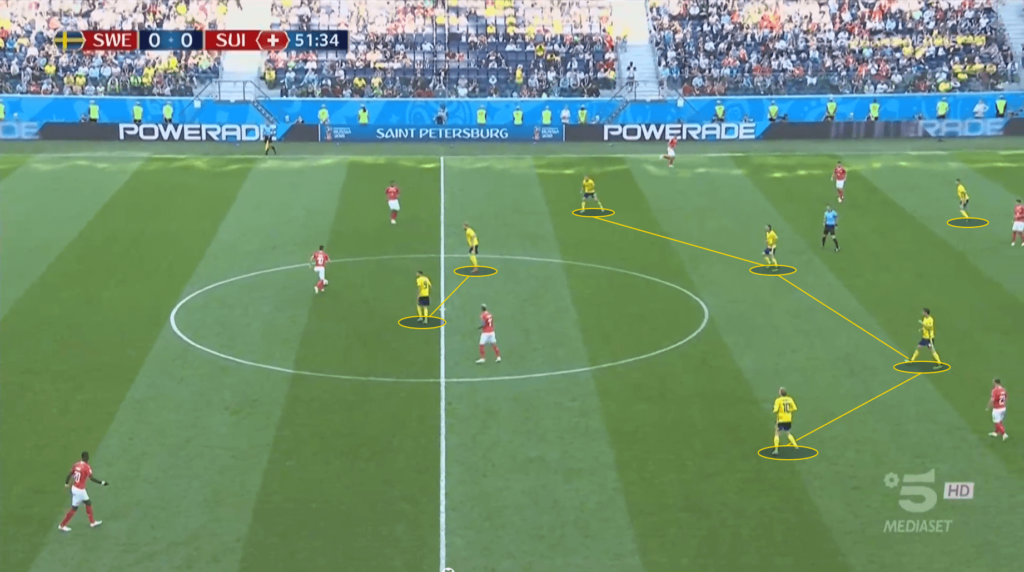 As expected, the Swedish team was comfortable in granting loads of the ball to their opponents. The Swiss duly accepted, retaining over 67% of the ball over ninety minutes. Sweden set up in a mid (above) or deep-block with strikers Ola Toivonen and Marcus Berg leading the line. The forwards not only acted as the first line of defence, stopping ball entry to more dangerous areas but also as ball pressurers when necessary. 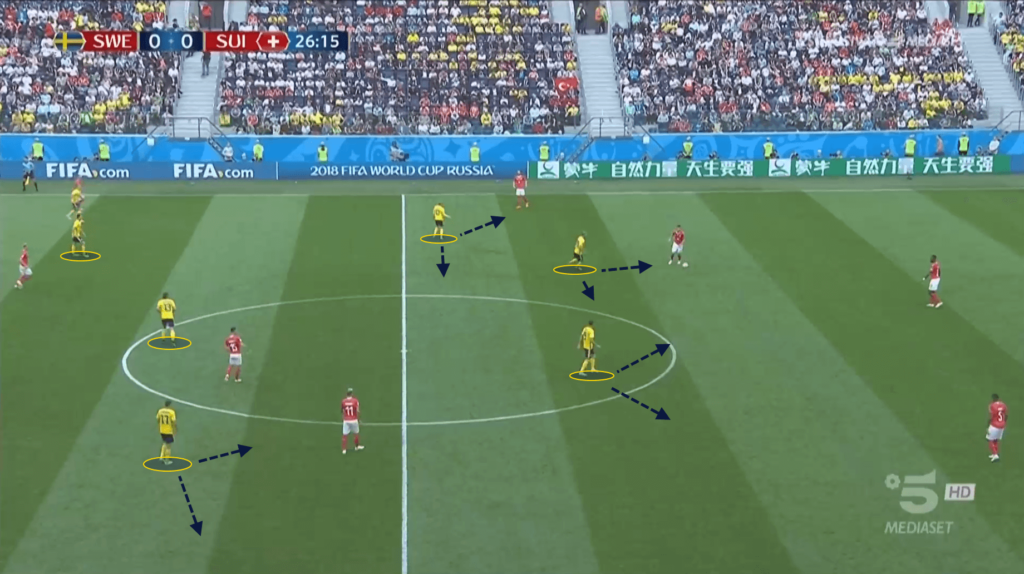 The flank players of the midfield four — Forsberg and Viktor Claesson — were triggered to close down when the ball moved wide. Whether the pass was to a wide centre-back or full-back, these wingers would look to shut down any further vertical progression. This sometimes formed a lop-sided 4-3-3, with the pressure on the ball-side. 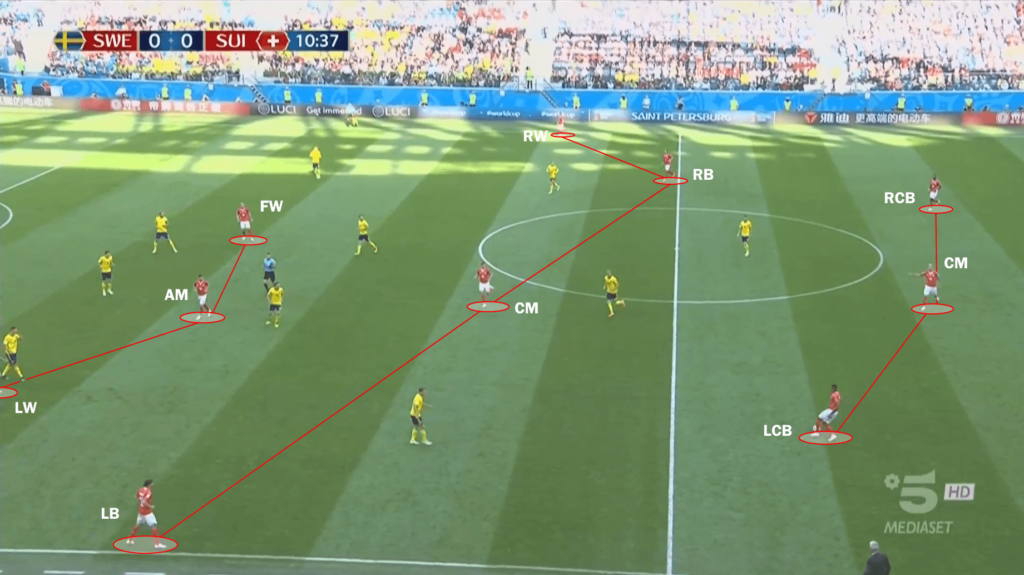 To counter Sweden’s proficient defensive organization, Switzerland used a fluid build-up formation. One of Xhaka or Valon Behrami would sometimes drop in between the Swiss centre-backs to move possession forward. In the sequence above, the full-backs move into the midfield to form a 3-4-3 formation. Unfortunately, a lot of Switzerland’s possession was ineffective because of a lack of entry points into the midfield.

Sweden Diligent on the Ball 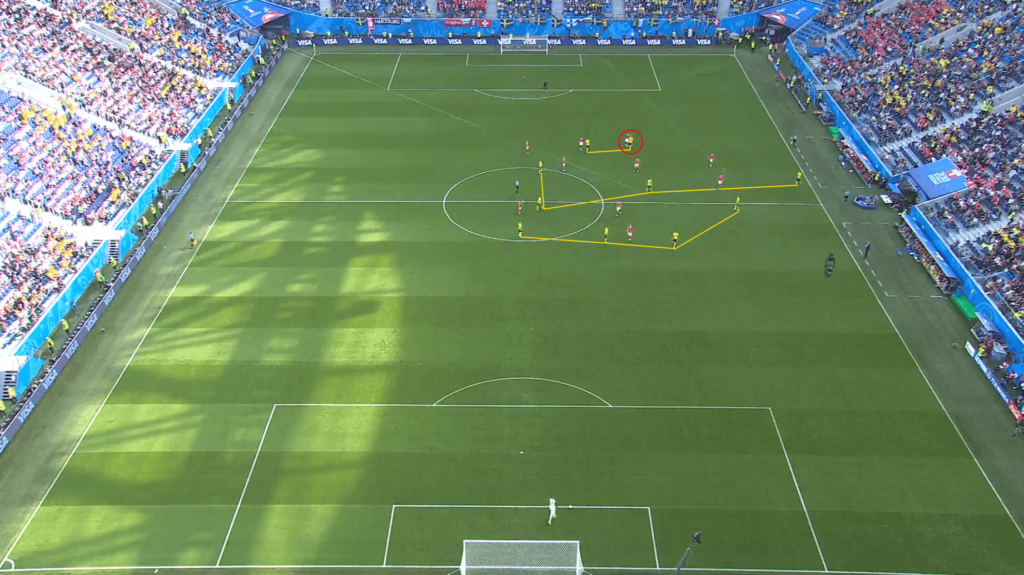 Sweden were never going to retain the ball more than the Swiss. Andersson has devised a brilliant gameplan that revolves around defending first, then passing directly. Whether in the form of a counter-attack or long ball, this is often effective against a side that commits too many men forward.

Robin Olsen’s goal kicks show us just how committed Sweden are to their process. Here, the entire Sweden squad scrunches the pitch to about one-sixth the size it normally is. Circled is Ola Toivonen, the trusted target of these long passes. Note how the Swedish midfield positions itself to win the knockdown or at least be able to counter-press effectively. 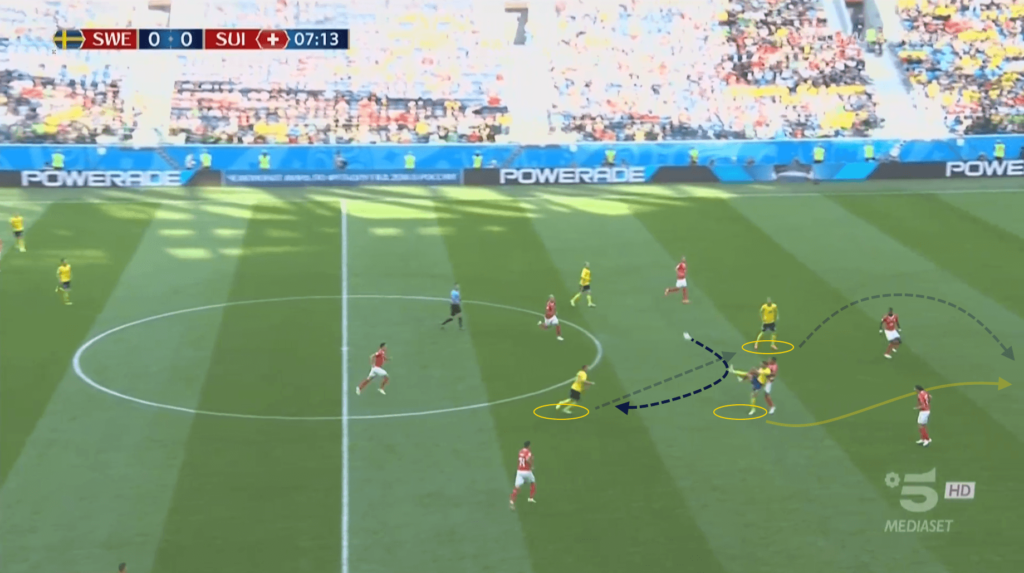 In another long pass, this time to Berg, we see how quickly a long ball can turn into a chance. Claesson is unmarked, allowing him to easily pick up the knockdown and pass to Toivonen. Berg makes a run in behind and receives a one-time knock on from Toivonen to get through on goal. Unfortunately, Berg is out of form in front of goal and has missed many chances in Russia. Yet, this showed just how effective the long ball and third-man pass can be for Sweden. 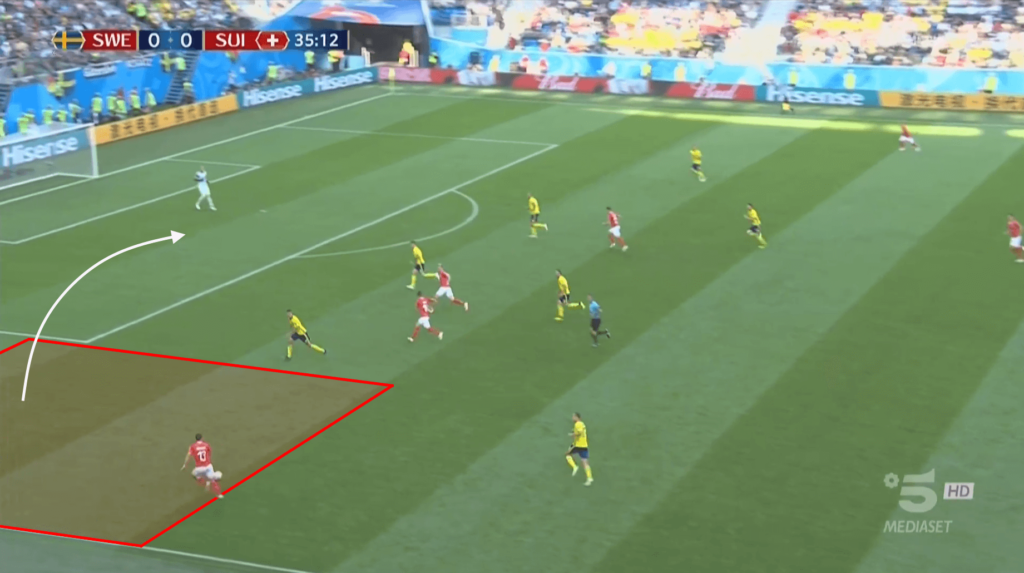 Once progressing the ball beyond Sweden’s first two lines of defence, Switzerland looked to take the ball wide. Ricardo Rodriguez often overlapped on the left and looked to cross after dribbling close to the box. This was largely ineffective due to Sweden’s great defensive positioning. The best chances happened when Rodriguez cut the ball back as it often exposed a Swedish defender to two attacking runs.

Another route of chance creation Switzerland tried was through Xherdan Shaquiri on the right. The muscular wide man would stay close to the touchline before cutting inside. As opposed to Rodriguez, Shaquiri would cross early, lofting balls into the box from the right half-space. Sweden’s height and good positioning meant that these passes were also ineffective. 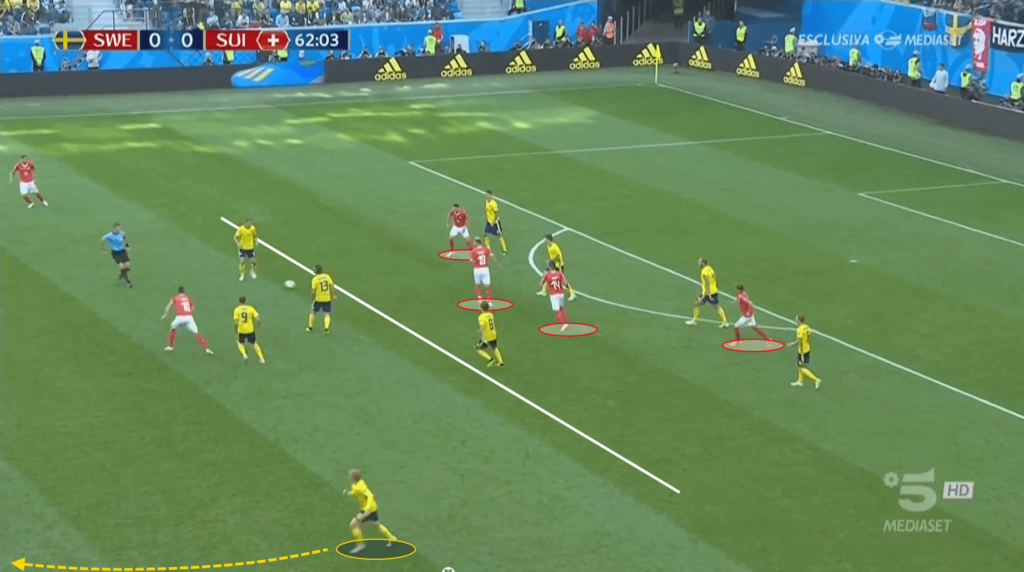 Switzerland’s overzealousness and, ultimately, poor defensive structure, led to their second-half downfall. A few sequences before Sweden’s goal, the signs of weakness began to show. Here, after the Swedish back line wins possession, the Swiss have committed too many players forward. Two midfielders, a forward, and defender are behind the ball. This puts serious pressure on Switzerland’s other players, especially when Forsberg (bottom) can receive a pass with space to run into. 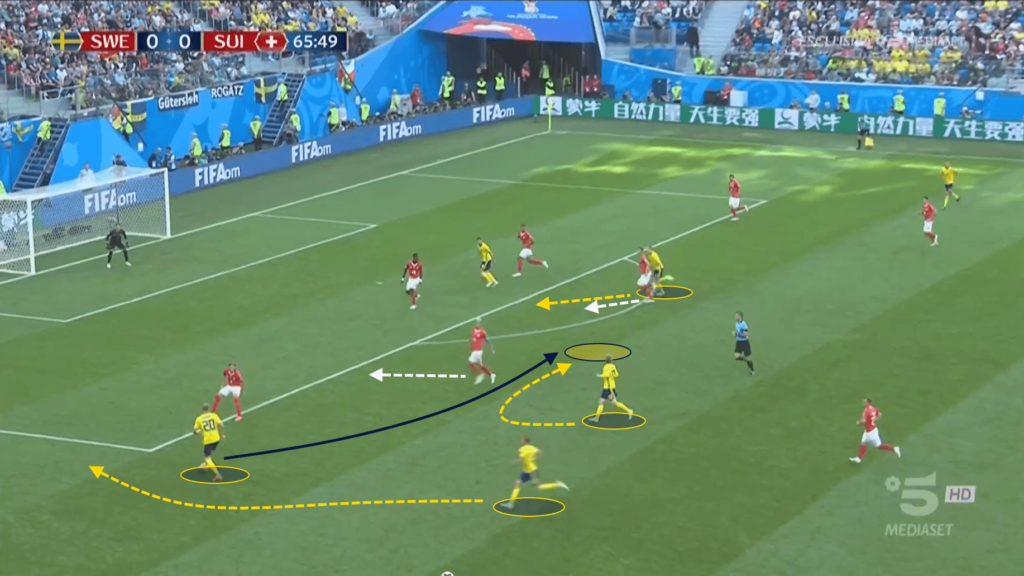 Sweden’s goal in the second half actually came from a strange sequence. Right-back Mikael Lustig found space in front of him and dribbled into the midfield. He managed to retain possession, sliding the ball over to Forsberg in the centre. With two lines of defence beaten, he passed wide to Toivonen.

What allowed Forsberg to get the ball back with space at the top of the box has to do with players off the ball. First, left-back Augustinsson’s overlapping run forced Behrami to slide into the box. If he didn’t, Michael Lang would have been outnumbered 2v1. Secondly, Xhaka was dragged out of position as Viktor Claesson ran into the centre of the box. With both midfielders focused elsewhere, Emil Forsberg was able to take a touch at the top of the box and shoot. 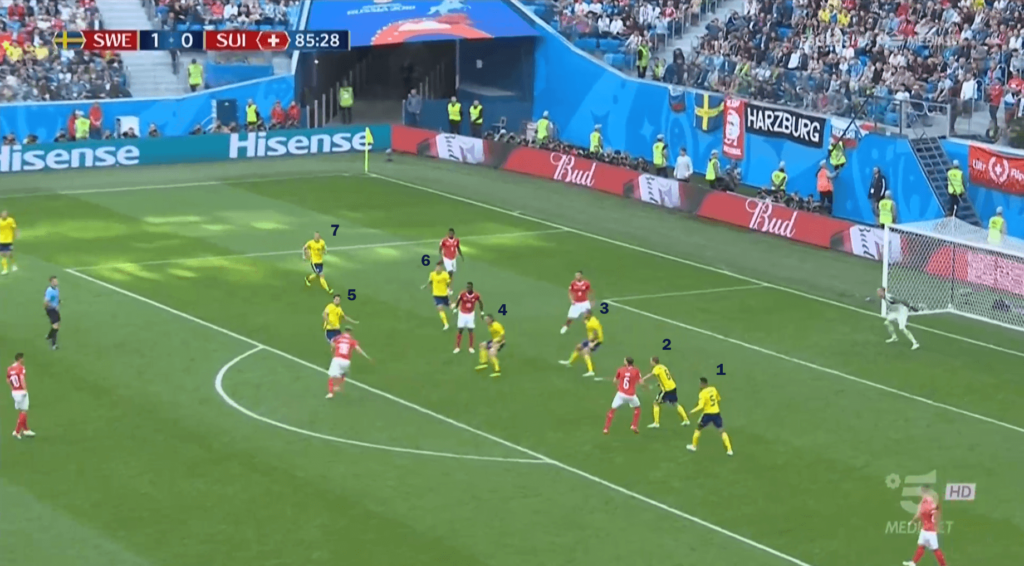 As full-time grew closer, Switzerland haphazardly launched shots at goal. However, Sweden were prepared for this tactic as well. There were many chaotic moments atop Sweden’s defensive box, but there were always bodies ready to block a shot. Above is an example of what often happened as time wound down. Seven of Sweden’s ten outfield players were in the box, with at least three of them prepared to block the shot. It is this intelligence and commitment that saw Sweden advance.

Sweden are not a talented team. They are not particularly skilful, nor are they very physically imposing. It is Sweden’s mental fortitude and effective defending that has earnt them a place in the World Cup quarter-finals. A smart, organized defensive unit combined with quick attacks and quality pass selection should strike fear into most opposing fans. England are next, and I wouldn’t be surprised to see Sweden clinch a semi-final appearance.