Eight of England’s eleven World Cup goals have come from set-pieces or penalties. Harry Maguire won ten aerial duels against a physically imposing Swedish team. Furthermore, England are second, only in the tournament to Russia, winning 59% of their aerial duels. Jordan Pickford has made crucial saves in the knockout games and his distribution enables them to control games. What will be the final ingredient to enable England to reach their first World Cup final away from home soil? The answer to this is controversial; Raheem Sterling.

Raheem Sterling: Off the ball movement

Most pundits can’t look past his two misses against Sweden, but he offers so much more to this England team. His off-the-ball movement stretches opposition defences and clears pathways for Dele Alli and Jesse Lingard to surge into the box. The graphic below shows how his run behind (highlighted in red) has created space for four of his teammates (highlighted in blue). Although, it ended up in a goal scoring chance for Raheem Sterling it also shows the space it created for his teammates which provides another angle of attack. 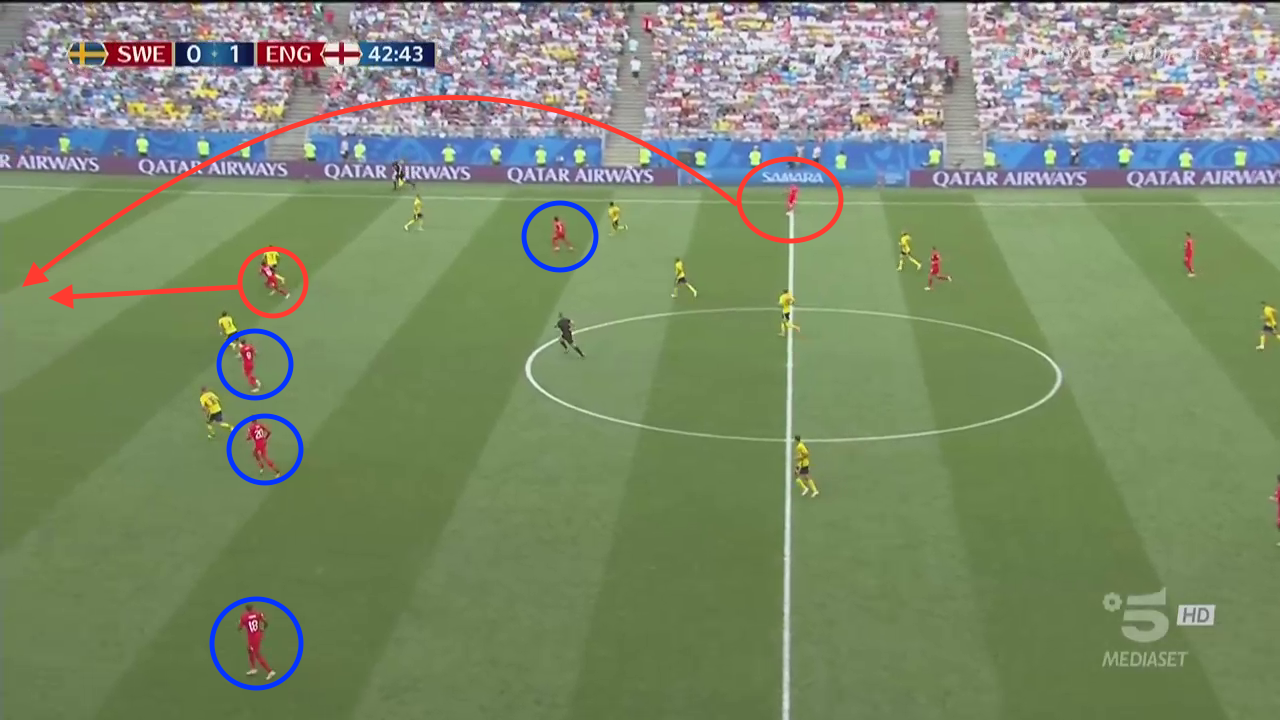 This movement would not have been possible without Pep Guardiola in the Premier League. He first tried the ‘false 9’ at FC Barcelona with Lionel Messi before progressing it further with Mario Gotze and Thomas Muller at FC Bayern, developing the raumdeuter position (a rough English translation of the interpretation of space). His tactical genius is now impacting the English national side and his passion for finding space in the opposition final third is why Raheem Sterling is key to England progressing to the final.

Whilst England do not play with a false 9. Raheem Sterling has the freedom to create space for Harry Kane, Jesse Lingard and Dele Alli. His selfish runs are opening up opposition defences, who are intimidated by his pace, as they drop deeper freeing up space in between the lines of defence and midfield. This is where England are most dangerous – either playing forward penetrative passes or winning corners or free kicks to continue their set-piece dominance. The headlines may opt for a more media-friendly star but without Raheem Sterling, this England team fails. His off the ball movement is less about the ‘false 9’ but more about ensuring his teammates arrive in the penalty area at the right time to convert chances.

A man who will continue to benefit from this movement is Harry Kane. He has contributed 55% of England’s goals, with 6 of the 11, but did not find the net against Sweden. This is crucial to the other players’ confidence; England are no longer a one-man team, and Harry Kane can compliment a free-flowing attacking team rather than be relied upon for a win.

Expected line up and tactics

In the semi-final, I’d expect England to line up unchanged to the last 16 and quarter-final. The key to success will be dominating the midfield and controlling the game. Some may interpret this as tiki-taka but that, in fact, describes a possession-based game for possession’s sake. If England are to win this game, they need to play forward penetrative passes, very similar to Manchester City and Tottenham Hotspur last season whom many of the starting eleven represent. 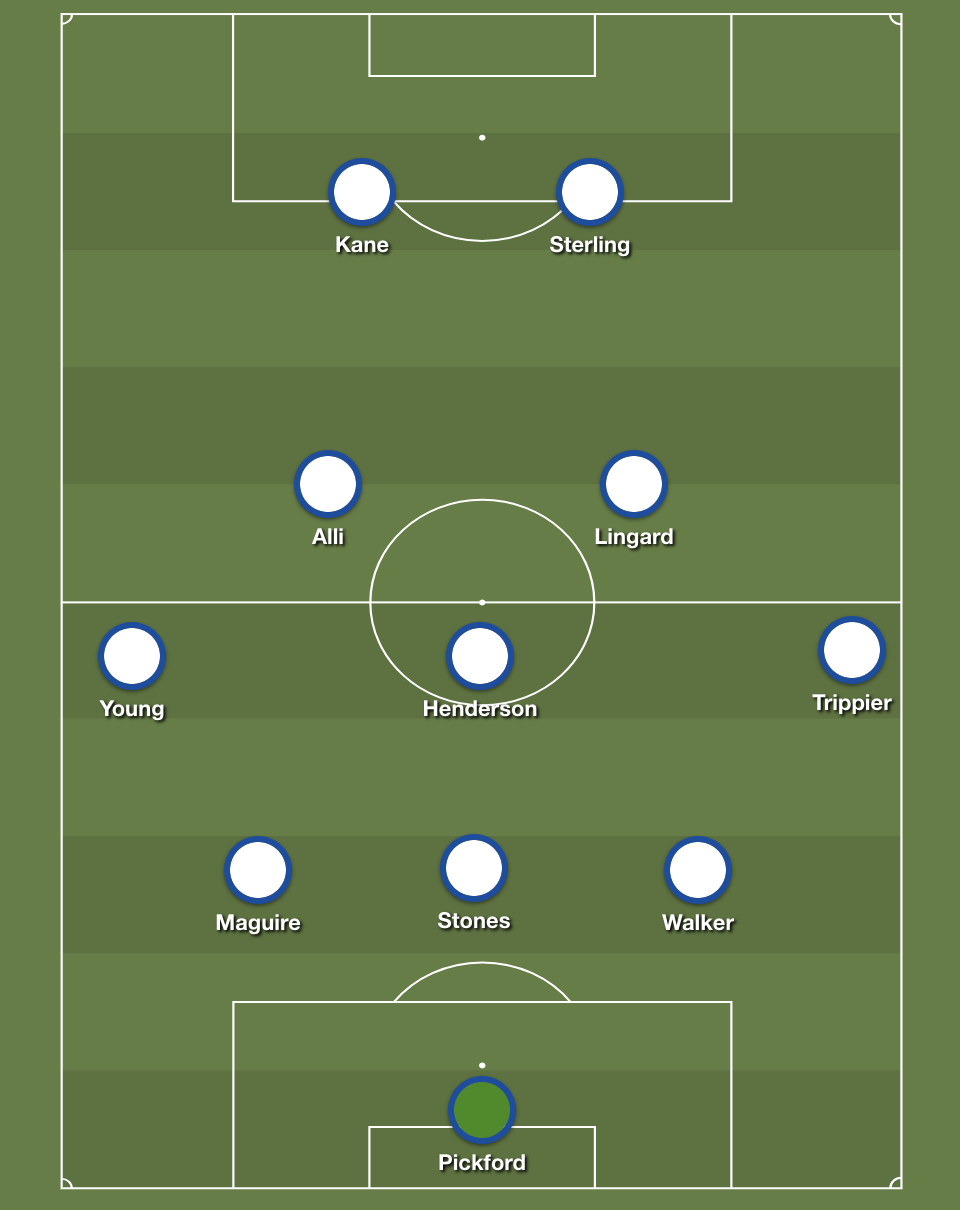 The key moments: England out of possession

Equally as important will be their reaction out of possession. As mentioned in our England vs Sweden preview, defensively, England are focused on disciplined organisation with the wing-backs following opposition wingers to create five at the back. Facing Croatia is the first time a team could be more dominant than England in possession.

Therefore, Gareth Southgate has two options. Retreat and defend in a disciplined zonal shape or aggressively press the opposition when the ball is lost high up the pitch. I would expect Gareth Southgate to follow the former but an aggressive press would stop Croatia controlling the game.

Furthermore, it would stop them triggering penetrative counter-attacks from Luka Modric, Ivan Rakitic and Ivan Perisic. Croatia can break at speed and with the predatory instincts of Mario Mandzukic, England need to stop the building of attacks at source. As highlighted below, aggressive pressing was effective against Sweden, as John Stones finds himself deep inside the opposition half to regain possession. 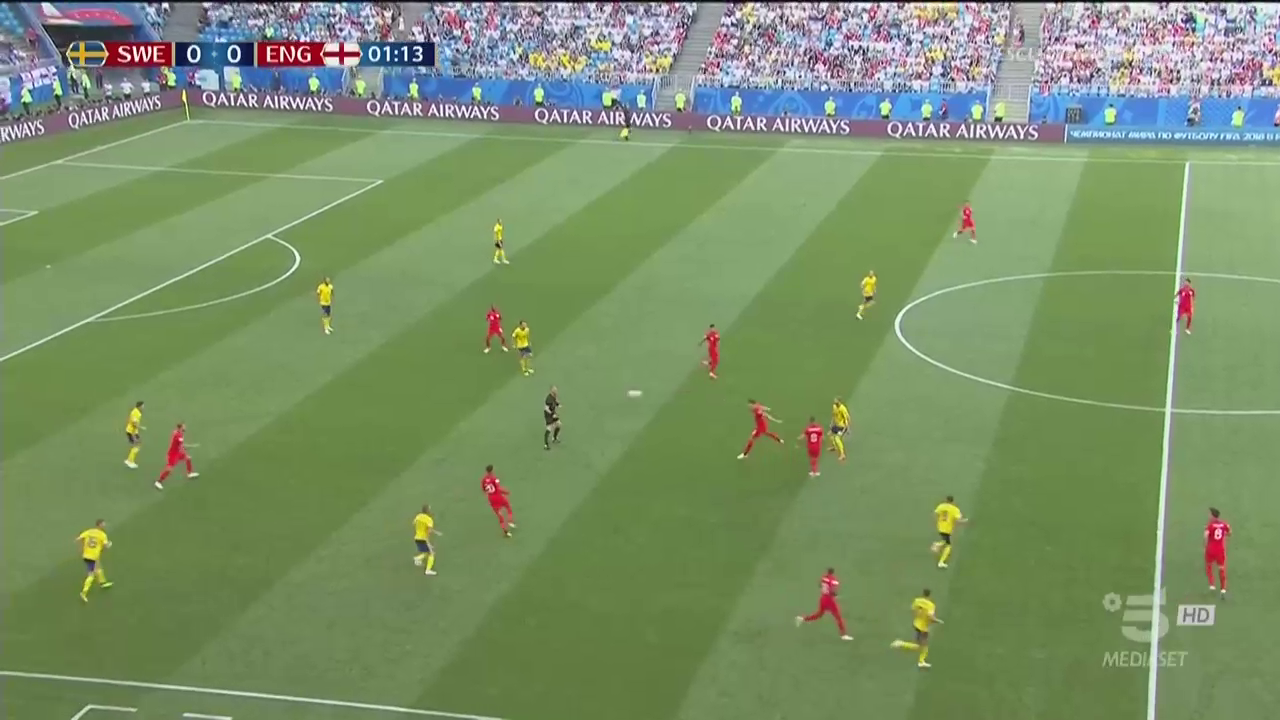 Much of the tournament has been focused on England’s ball retention and penetrative passes in possession. To win this semi-final, It’s time to put England in control out of possession. A high defensive line and an aggressive press high up the pitch will stop Croatia’s attack at its source. The high work rate and energy of England’s forward players will enable this to happen and will also create chances in the final third.

Once the ball has been won high up the pitch, the selfless off the ball work from Raheem Sterling will come to the fore. It will open up space for Harry Kane to add to his impressive goal tally and the ever-improving Dele Alli and Jesse Lingard.