Whilst all the big names kept struggling to survive at least for the next round, there has been the emergence of another ‘Golden Generation’ from Group G of FIFA World Cup 2018, now shining in the semifinals. From beating small teams like Panama and Tunisia to crashing out a team like Brazil in the quarters, Belgium is all set to mark the history. Though, their next clash with France – hot favourites to win Russia 2018 – would be their toughest confrontation of all. What still can work in Red Devils’ favour is their innovative style of attack – playing on counters, which are no ordinary counters, with three at the back – something that has given new tactical dimension to this World Cup. So, let’s see how Belgium can beat France in the Semis.

Belgium has a unique style of play. As soon as Roberto Martínez’s men get the ball or recover it, they put into an attack at their earliest possible. Once it is into the attack, their quick passing and moves into the spaces around the defenders in both horizontal and vertical planes can shuffle defence especially during transitions. This enables them to initiate fast threatening counters and instant attacks from anywhere and anytime while creating spaces in key areas. France’s already unorganised defence can get shuffled when conceding such quick passing plays and defence cutting movements of Belgian attackers during transitions.

In an example below against Panama, after Meunier received the ball at right wing, he dribbles up until he could pass it to his nearby teammate. The latter, having a whole horizontal plane empty in between the lines, passed through the region to the far wing while the defenders were still watching his moves. The ball was not intercepted because Belgian players were nearer to it than the opponents and so shielded it in a way. From the far wing then, wing-back Carrasco bumped up to this dangerous, but an open region. These fast passing moves across the wings didn’t let Panamanian defence to settle. 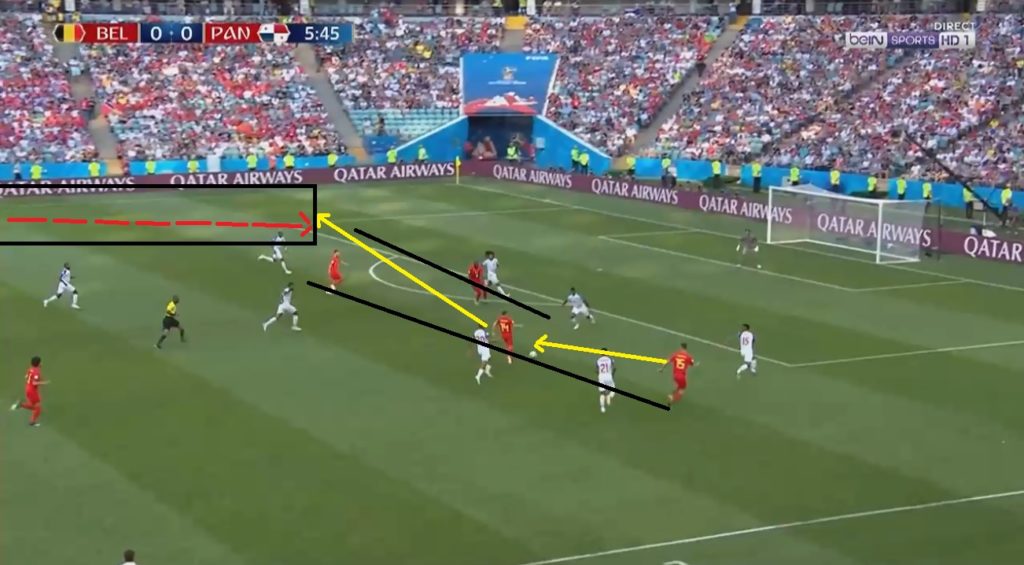 Then, in the same fixture on the left flank, as De Bruyne won the ball, he flicked it to Carrasco who then passed to Hazard outside the opponent pressing block with plenty of space in front of him to initiate the counter. 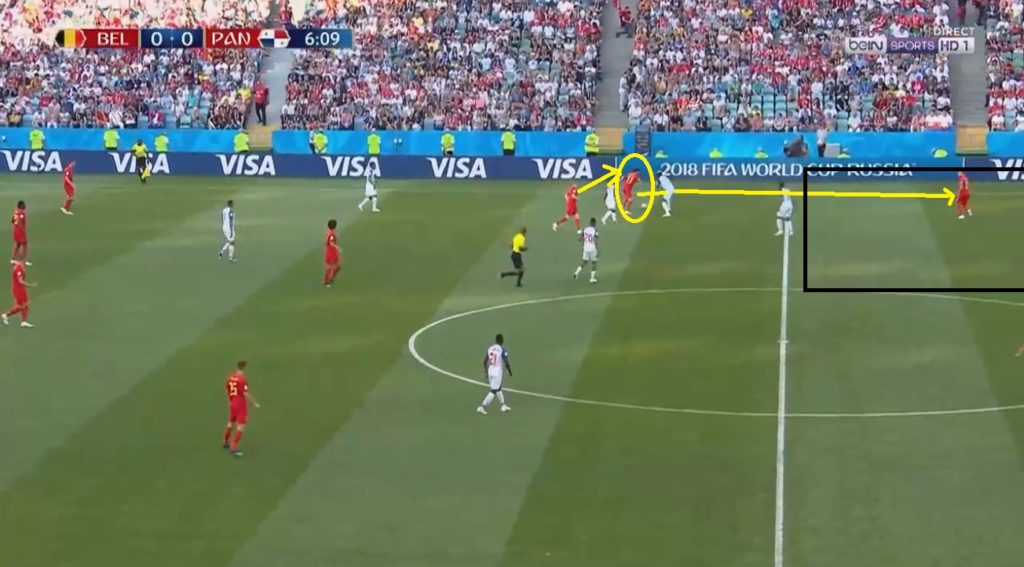 The fast dribbling of Hazard and Lukaku and their ability to play through-passes make Belgium quick to react and shuffle defences in transitions. Its Hazard’s dangerous dribble runs against Brazil in the last 15 minutes which should be given the credit which diverted the pressure away from Belgium’s half and thus avoiding the opponents equalising till the final whistle.

In another case, Hazard’s dribble runs at the left against Panama are creating a large space for the players on the right side. 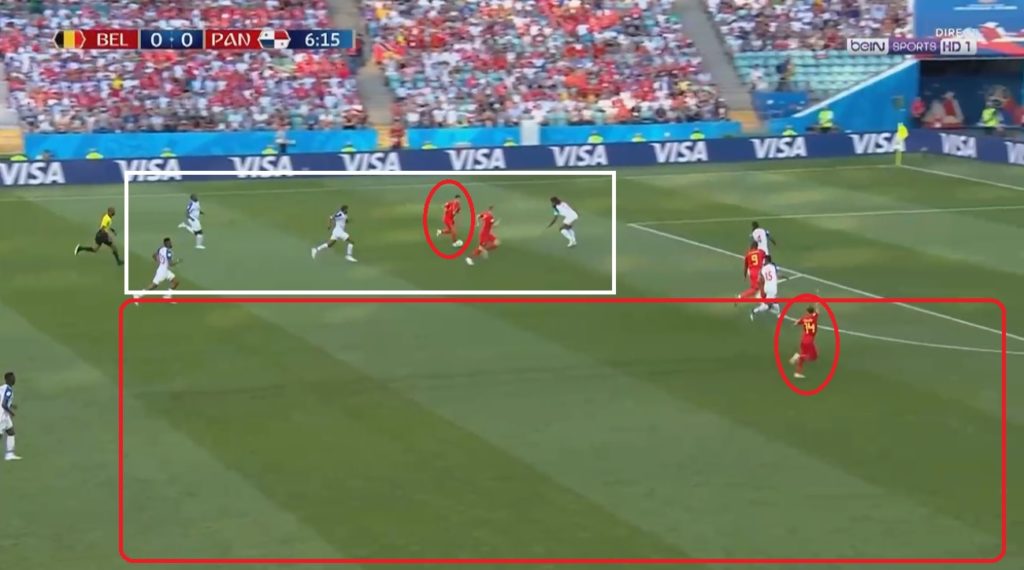 Against Japan, Hazard’s fast and dangerous dribbling grabbed the attention of all the defenders around him. The Chelsea man then passed it to Mertens just before being tackled while cutting to the defender at his right. Mertens with a wide horizontal plane open on his left then passed to the far wing from where Carrasco picked. 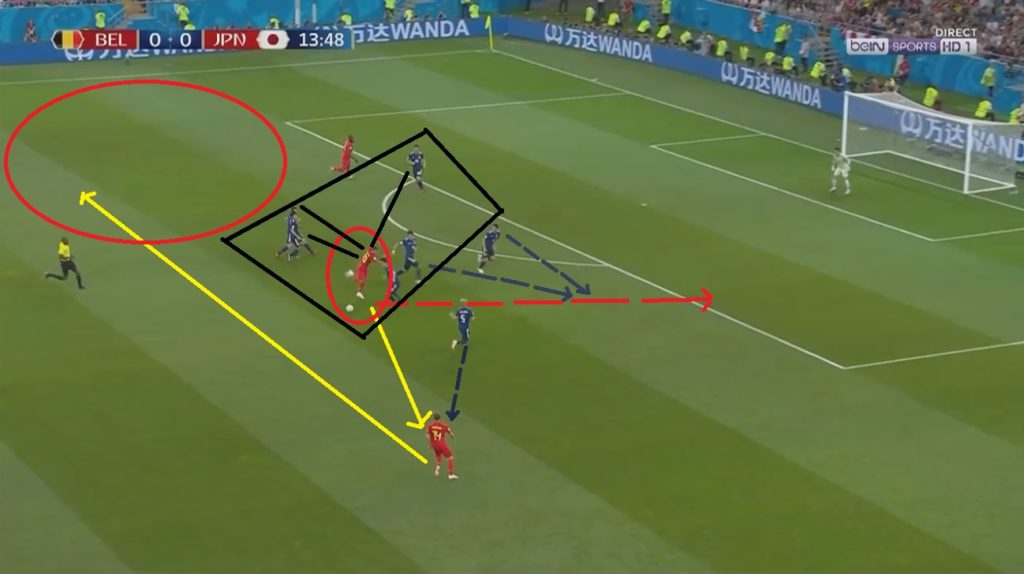 Isn’t such passing play amazing where Belgians create space by quickly cutting in between the defenders and distracting them during the transitions?

The favourable change made by Martínez against Brazil was putting De Bruyne as False nine instead of into a purely defensive role in front of the back-line. The formation in the attacking phase was 3-4-1-2 with Dr Bruyne behind the front two deep in the centre, having the defensive cover of Witsel and Fellaini behind him. 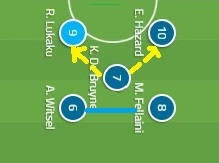 This contributed a lot to Belgians’ attacking display as De Bruyne was connected to the two strikers. Hazard, Lukaku, and De Bruyne exploited Brazilian defence well in the quarterfinal. Putting De Bruyne in such an attacking role against France will enable Belgium to add creativity to the attack. Though Belgium would need to solidify its defensive cover behind the Manchester City’s man to keep him free to attack.

Belgium usually plays with Back 3 covered by two defensive midfielders. But against Brazil using 4-3-1-2 or 4-3-3 helped them compress the midfield when they were conceding attacks from the depth. Belgium should go with the same formation when defending against France since with three defensive midfielders they can at least numerically match with France’s midfield which has the likes of Kante, Pogba, and Mbappe. Then with De Bruyne dropping and making a defensive structure with his teammates, Belgium can press France in deep – possibly the favourite region of Pogba.

Even though it is likely that Belgium can loosen its horizontal defensive compactness even with three defensive midfielders, they are good in isolating the opponents vertically. The Red Devils form a vertical block around the opponents, due to which the opponents remain vertically isolated in Belgium’s half while being closed down enough to be unable play a high pass. And if the opponents want to pass to the open region, they may have to play back pass to get the ball reaching the desired region. But until then the Belgians get enough time to shift their pressing structure to the respective vertical plane.

In the picture below, Brazil’s Willian is free at the right wing but Coutinho (with ball) can’t pass to the prior directly due to the vertical block of Belgians isolating him, so the pass went to Silva and then to Fragner at the right back. But till then Hazard got time to come to Fragner, while Chadli’s move to Silva together resisted the fullback to pass forward, so he had to pass back to Silva. 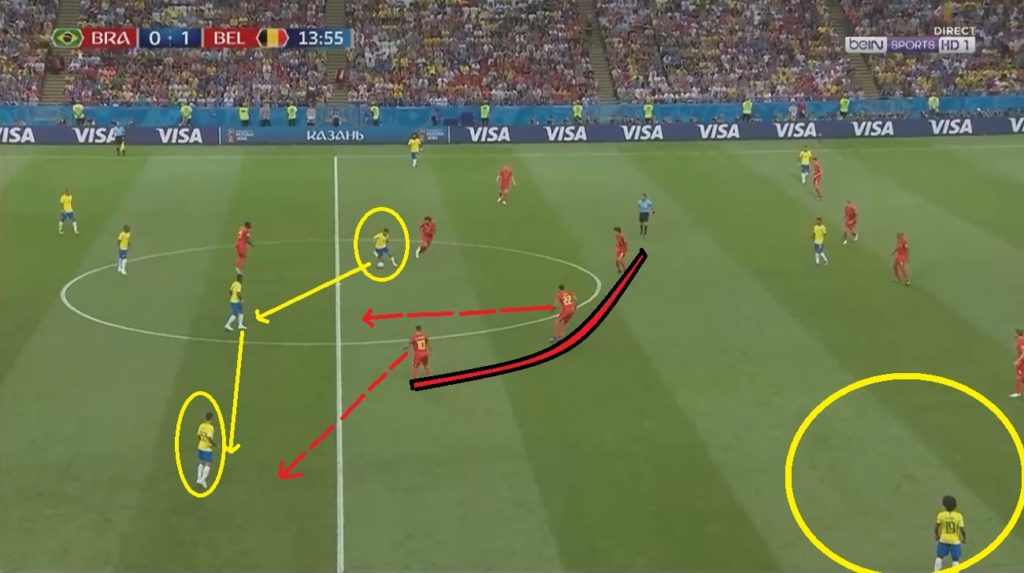 Here again, Belgium’s vertical block isolated Brazilian’s player at the right wing from Willian and Paulinho who are open. The opponent is also too closed down by Belgians to play a high pass. Thus he had to pass back to his teammate so the latter can bring it in a forward play. This gave quick Belgians enough time to re-position their defence horizontally around the goal area where Brazilians were now able to approach. 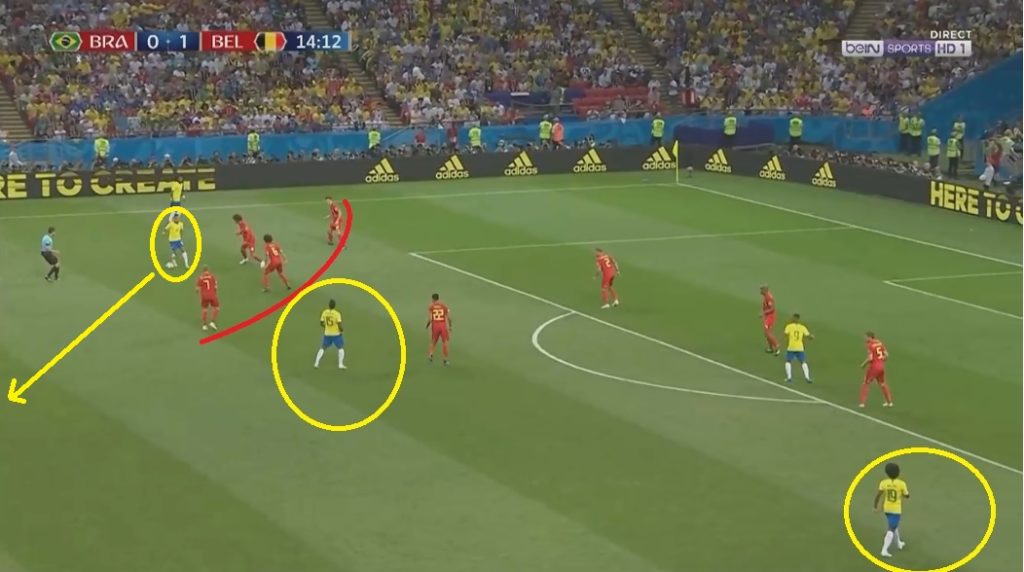 This shifting of Belgian defenders vertically and even horizontally, as needed, gives balance to Belgium’s otherwise exposed defence. On the contrary, France could suffer if its attackers are left isolated on a wing and could lose coherency in their passing structure when having to cut inside across Belgium’s vertical block. Thus, if Belgium’s defensive structure vertically isolates French attackers at wings and half spaces, it would surely frustrate Deschamps’ men. Besides, leaving a whole other side empty while making a vertical block can also benefit Belgium offensively too for the sake of their instant transitional counters.

The passing map of Belgium against Brazil below, provided by @11tegen11 shows the same. The attacking flow is directed to Hazard, Lukaku, and De Bruyne at different conclusion points. 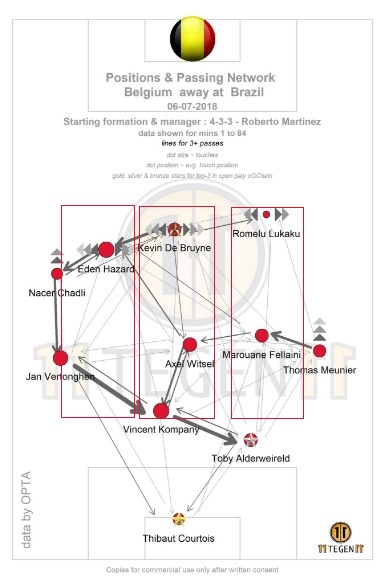 The passing map against Japan also shows the similar structure. While De Bruyne has the defensive role here, he is not at the concluding point of attack, but Hazard, Mertens, and Lukaku are. Even though most of the passes are directed to Hazard, the other two seems to have their presence at the different ‘possible’ conclusion points of attack. 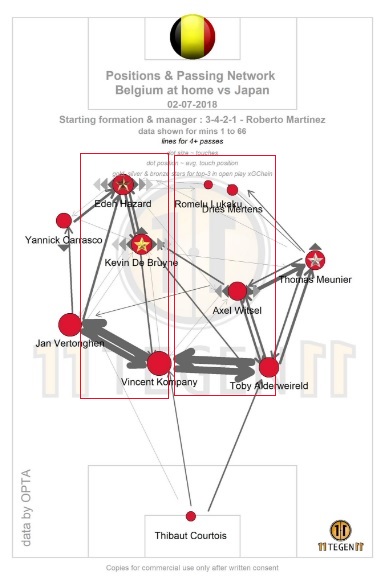 Then again, the map against Panama shows the multidimensional nature of Belgium’s passing network at the attacking front. 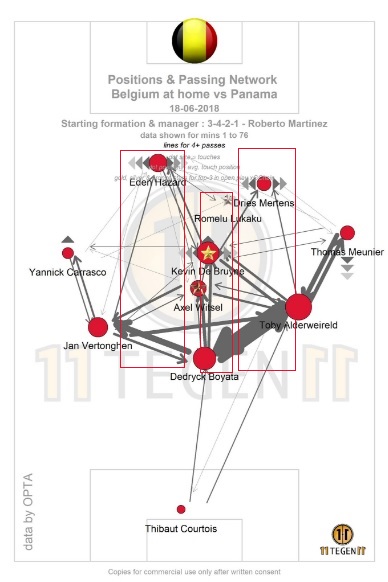 On the other hand, France’s passing maps shown below, also provided by @11tegen11, are more of one dimensional with the three attackers concentrating towards the common region at the attacking front, instead of being at different multiple points. This shows the attackers’ preference to remain close to each other, especially Giroud and Griezmann. 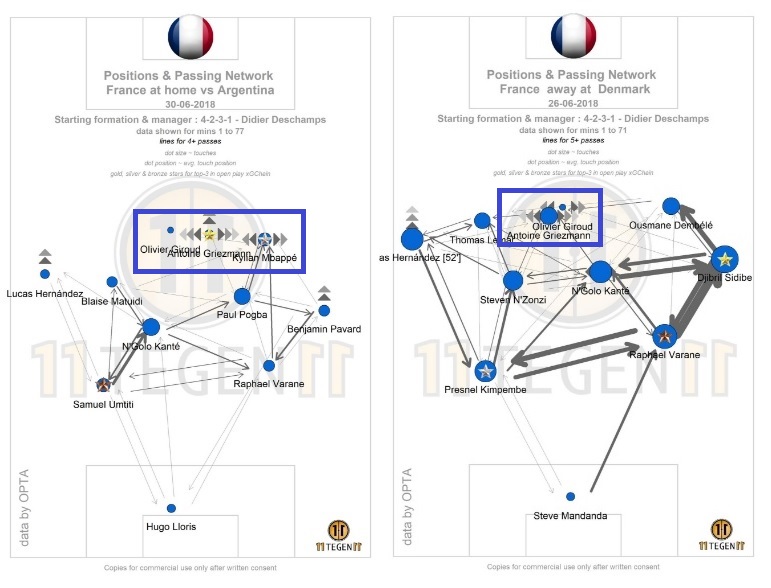 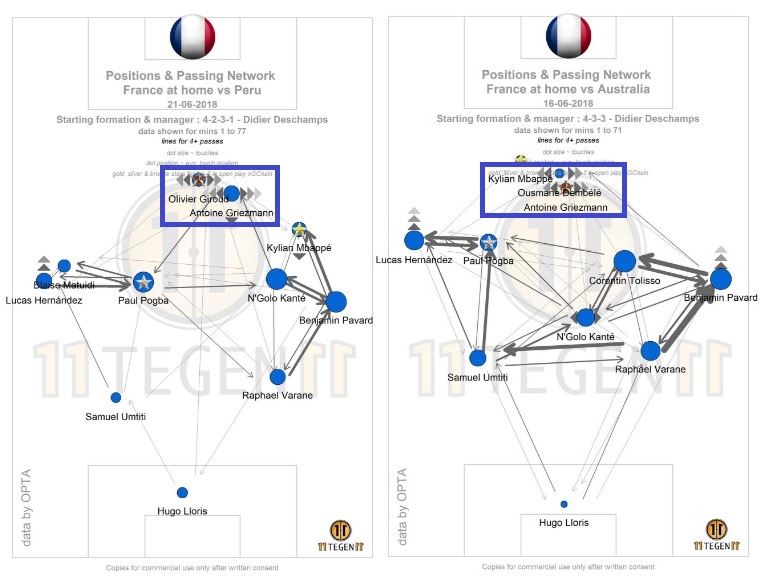 One element which would be behind the multidimensional structure of Belgium vs the one-dimensional structure of France is that the Belgian players are not as experienced in playing together either in World Cup or in a league as are the French. Les Bleus know each other more than the Red Devils do, which makes the latter to rely on counters while enables France to operate like a coherent unit.

But can we take anything from this? Definitely. The multidimensional nature of Belgium’s attacking structure points out the individual contribution of Belgium’s attackers during counters. With each attacker leading attacking at his respective plane depending on his route to playing the counter up the pitch, the opponents are very likely to shuffle worrying of the different planes, mainly during instant transitions which Belgium is always able to start – from anywhere, anytime. Most importantly, Belgium’s multidimensional structure will cause at least one of its attackers to stay wide against France thus stretching the defence and giving an opportunity to the defenders or midfielders to play from the deep. If the opponents still remain compressed, the wide attacker(s) will have now free access to the width to play his attack. Like Hazard and Lukaku’s wide positioning gave them free access to the widths around compressed Brazilian defence.

Such movements do signify a dispersed, multidimensional attacking structure. Thus, despite the Belgians lacking an overall coherent attacking unit, their multidimensional attacking style fits better to their strengths and can give them an edge over their opponents. And, the attackers are able to very quickly transit the play across the planes – from wide to deep or vice versa – with their attacking runs and passing movements, as discussed above.

What can cause problems for Belgium though?

The same element which makes up Belgium’s strong attacking profile – attacking display, ability to transit attack from anywhere, and multidimensional attacking structure – does have some defensive shortcomings too. As the wing-backs are more likely to bump forward and support the conclusion of attacks at their respective plane, this causes Belgium to concede a big gap between the wings and the central defence. Even if Hazard drops deep with the respective wing-back, there often remains space behind him.

Opponents like France can always exploit such gaps, which have been exploited before in Russia 2018 too, such as in the fixtures against Tunisia and England. In that case, Belgium would have to rely a lot on high work rate of Hazard and on Meunier who is almost always ready to chase his opponent back to the far end, slow down the latter’s’ run, and give his teammates time to close down at the defence.

Secondly, the Belgian defence becomes exposed when they lose possession in their half since that usually happens when they concede a defensive transition back from their attacking transition right in their own half. They could have conceded Augusto’s equaliser in the quarterfinal against Brazil because they had lost the ball in their own half. Thanks to Hazard’s counter runs, Brazil players had to restrict their attacking presence in Belgium’s half.

Despite that Belgium’s attacking style has some defensive shortcomings, they have a world-class goalkeeper in the form of Thibaut Courtois at the defensive end and world-class attacking weapons in the form of Hazard, Lukaku, and De Bruyne at the offensive front – all being the star performers of big Premier League Clubs. With quick space-creating movements and fast dribble runs, the Red Devils can surely vindicate their counterattacking potential against France – another more experienced counterattacking power,  though comparatively not as quick and dangerous in creating and reacting to the opportunities as is Belgium.