The World Cup 2018 also begins for Belgium with a 3-0 victory over Panama. Which means two things, firstly, this was the fourth encounter with CONCACAF team at World Cups. Secondly, they recorded their biggest victory in the World Cup after defeated El Salvador in 1970.

Despite the big victory Red Devils had two really different halves. One with struggling, and one with great performance. Let’s see what is the reason(s) behind this distinct halves. 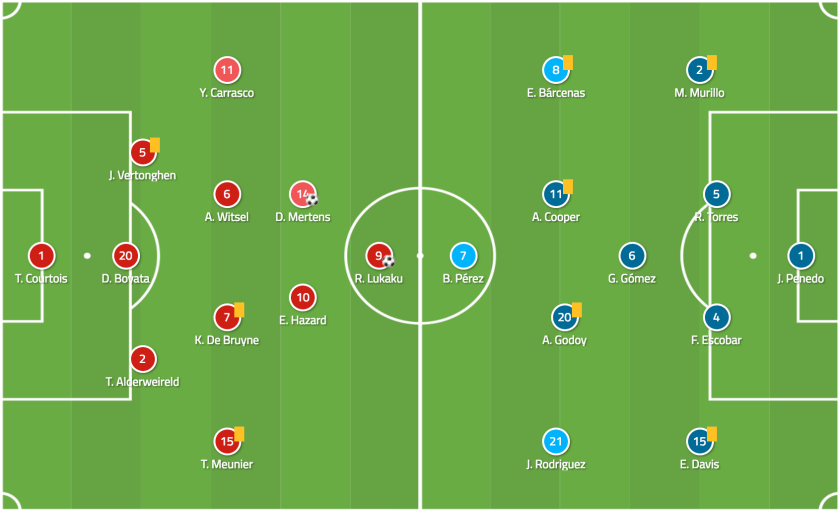 Belgium’s team selection was not compromised with any surprises in individual level and in the choice of the formation. Roberto Martinez goes with the regular 3-4-2-1 formation. The only change was fielding Boyata as a replacement for Kompany, who have some injuries.

On the other side, Panama lined up as expected in a 4-1-4-1 shape, which was a mid or low block. With a great presence at the central area, thus it was interesting how would deal Belgium with this massive defensive scheme.

Panama chose to not disrupt the opponent’s deep build-up with intense pressing. Instead, they formed a medium-low block and maintain a central presence. Therefore the Belgian back 3 was able to progress without any difficulties.

Until some point. Panama also used tight man-marking against De Bruyne and Witsel – as you see below. 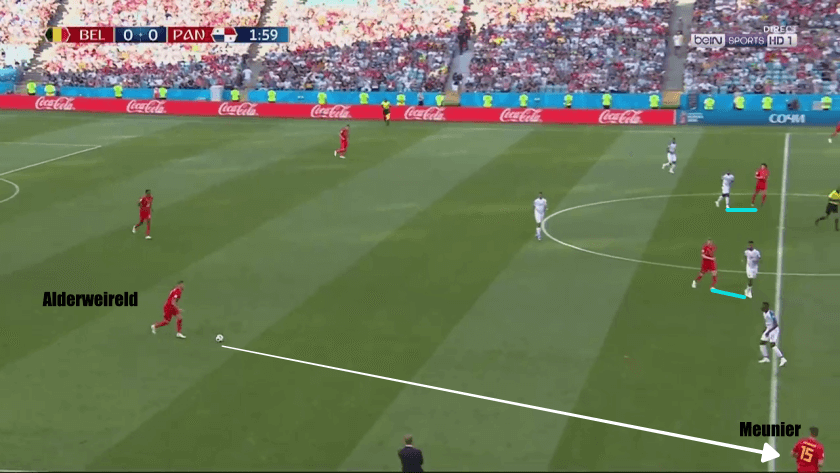 However, Panama always tried to be in close proximity to the opponent players, therefore Roberto Martinez’s side met with a major issue during the build-up. 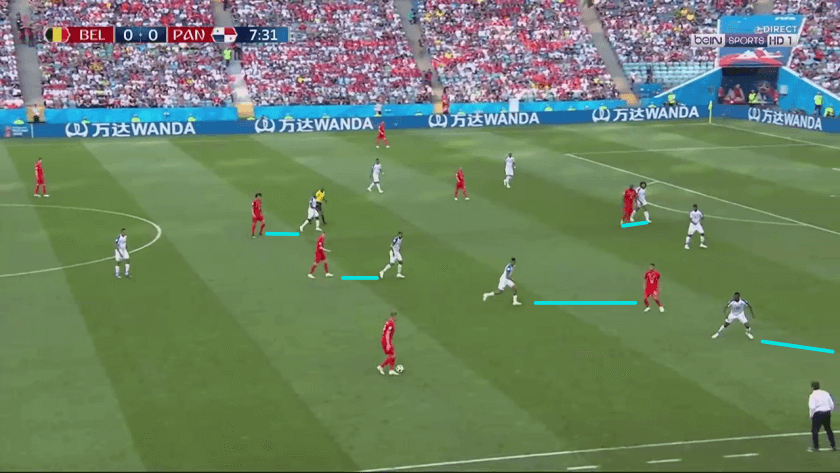 They lack clear passing options. When they attempt to pass to the centre players they had to deal with high pressure on the ball. Thus Belgian progress restricted to the wings. The most frequently seen pattern was Alderweireld pass to the Meunier then he tried to reach Mertens or Lukaku with a diagonal pass. 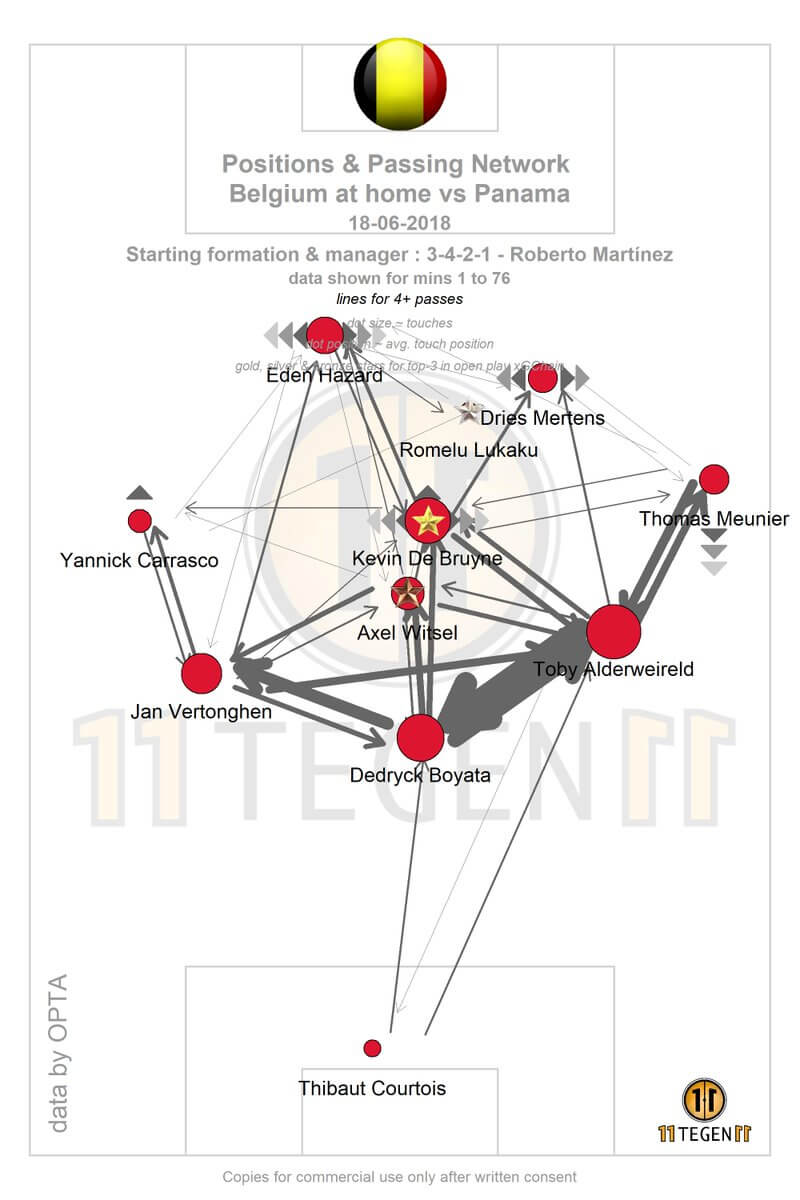 Thanks to 11Tegen11 for the great pass map.

Furthermore, the Red Devils formed a 5-3-2 or 5-4-1 shape in defence, but in possession, they played in a 3-2-2-3 formation. In this system the two wingbacks held width, and the others positioning in the central area. As you see below, Lukaku, Mertens, Hazard, Witsel and De Bruyne were almost in the same vertical zone. 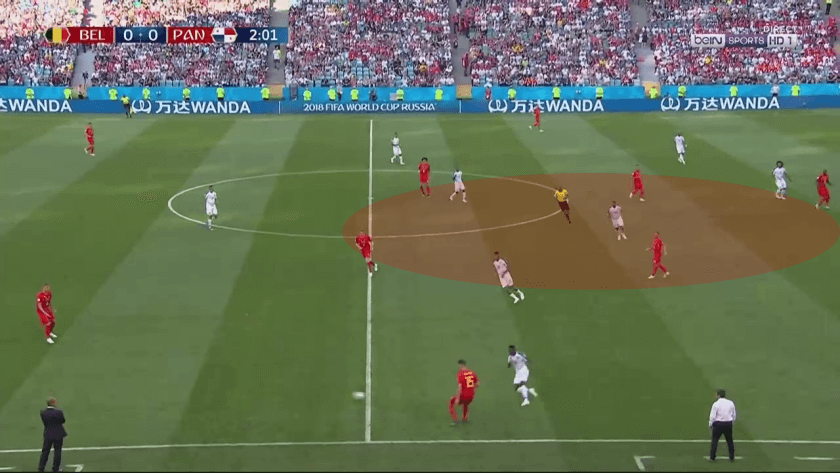 However, this was perfect fits for Panama’s 4-1-4-1 defensive scheme. Having the most of the dangerous players in middle Panama did not need to do anything else just defending the central area, where they already have an advantage. Belgian players were unable to make a separation in the middle, and with this congested area, they could not find a way in it.

Panama looked confident in the first half due to the predictable nature of the opponent’s attacking scheme. They could easily neutralise most of the attacks. Nevertheless, there were some moments when Belgium find a clear path to Panama’s goal.
In this instance, Belgium was able to pass directly to Mertens via an open passing lane. Then he could pass towards Lukaku. 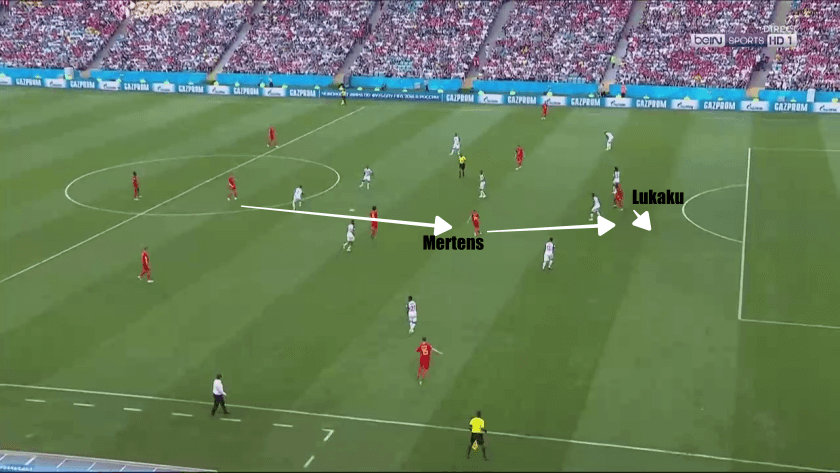 These kind of patterns were only rare occasions in the first half. Most of the time they struggled to break Panama’s defence.

Probably the most important player in Belgium’s squad, however with his midfield position he had to play in a deeper position than he usually does in the Manchester City. In the first period of the match he tried to drop deep to help the progression and make the connection between the lines, but without a clear passing option, he failed. Then he moved a bit higher to provided this passing option, but with Panama’s man-marking this was not a viable opportunity.

Therefore, the most of the first half was out of the play, which means he could not help the build-up and even did not reach final third to operating in it, which is a huge waste.

What’s needs to be changed?

So, during the halftime break, Roberto Martinez had to figure out how to break the opponent’s defence and showed to the players. Firstly, he had to solve the problem around De Bruyne. Secondly, kind of the same issue with Lukaku. The Manchester United’s striker had only seven touches during the first half, which considering his role as a target man, quite bad.

And thirdly, he has to solve the weak wing play. Because in the first half Panama was able to make numerical superiority in the right wing, where Belgium most of the attempts were. Carrasco was alone in the left wing due to the fact that Hazard occupied the central spaces. Just occasionally moved out to the left.

No big changes, everything changed

Without an attraction that pulls out of the position of defending the team, Panama could sit deep and keep the clean sheet without any trouble. However, Roberto Martinez committing his centre midfielders into a higher position, whilst asking Mertens and Hazard to occupy a position nearer to the wings, therefore De Bruyne and Witsel were in much more favourable circumstances. 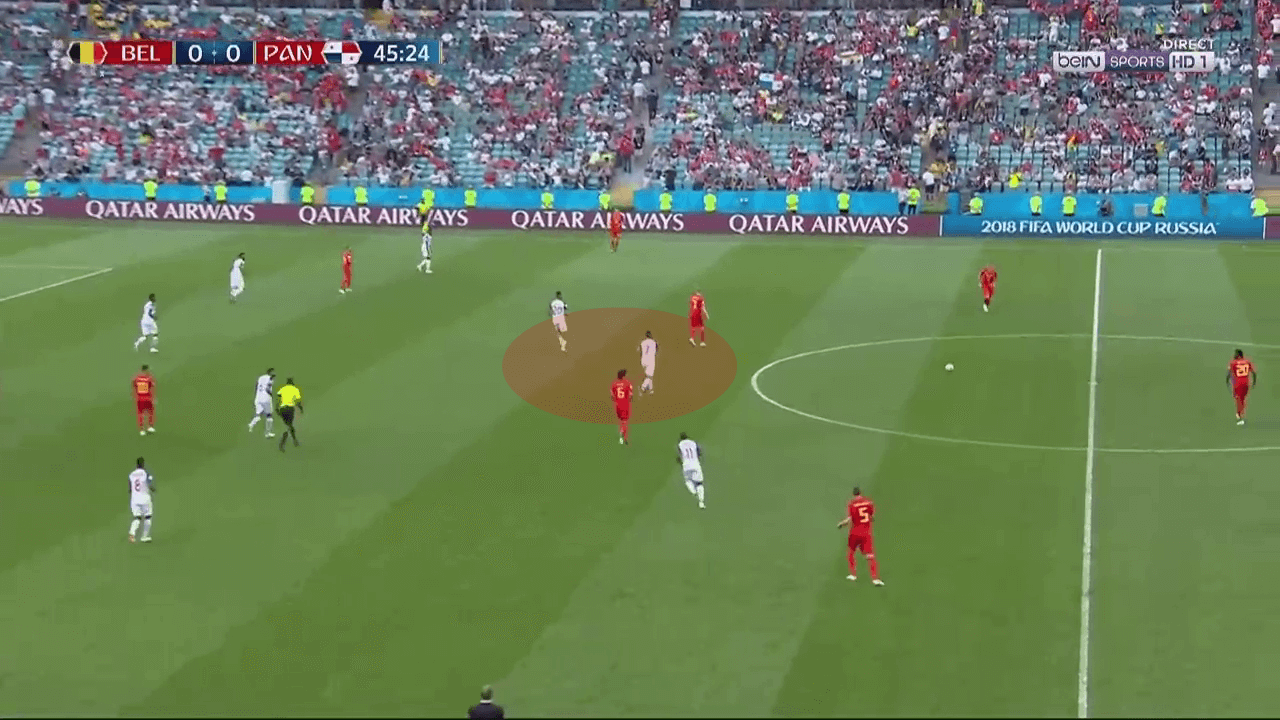 It made a less congested area, which allowed De Bruyne to higher involvement in the attacking third and makes some great final passes. This slight modification in De Bruyne’s role led to the first two goals. This situation below was before the opening goal.

Witsel found De Bruyne free in the right half-space. And then he could pass to Mertens.

Since De Bruyne’s change also affected the wing play because the opponent’s players had to divided their attention, and move a bit deeper, therefore it created space to the right wing, where Mertens joined to Meunier. Moreover, Alderweireld and Witsel also helped to improve the right side. Thus it created constant access to the wing and made numerical advantage for the Belgian side. 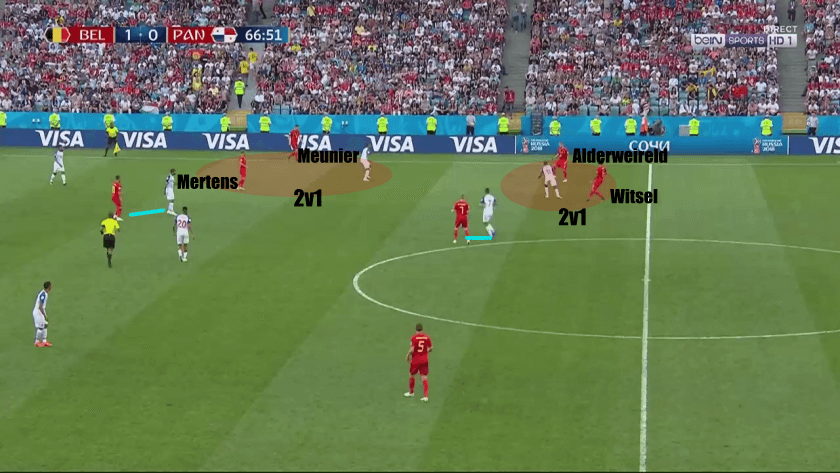 Lukaku’s feature in attacks became more important in the second half. The Belgian striker often dropped to the right halfspace for layoffs, which made decision-making crisis for the defenders. Following the striker too far is makes the team vulnerable, therefore Lukaku could made separation from his marker. These led to some promising chances like the one below.

Belgium with the combinative play and much more movements and a connection between the players allowed them several breakthroughs. Which in the end led to a highly dominant display from Roberto Martinez’s man.

Due to the high expectations that the fans wait for the Belgian golden generation, this was a great victory. A step which was needed. Especially, if we think through how the big teams struggled in the first round. It is a great achievement that after a bad first half they could adjust their tactic to the circumstances and find a way to breakthrough Panama’s defence.
This ability can be a winning skill that can win the whole thing for them. Next opponent will be Tunisia.