Of all the teams competing this summer at the World Cup in Russia it is perhaps Panama who are the biggest dark horses. They came incredibly close to qualifying four years ago for Brazil 2014 but this time around they were able to take advantage over a poor American team to take their place in Russia alongside Mexico and Costa Rica.

Traditionally football is not even the most popular sport in the country but with the excitement around the national teams chances in Russia there is a real possibility that qualification for this tournament could be the catalyst for the game to take over in Panama.

We do not expect to see too much in terms of attacking intent from Panama this summer. They will be clear underdogs against the European sides in the group with England and Belgium expected to go through in first and second and even Tunisia as the final group stage opponents are more experienced at this level. Instead, Panama will line up with a deep five man defensive block and look to prevent their opponents from breaking through.

The Colombian coach is something of a journeyman and indeed this will be his third World Cup having previously coached his native Colombia in 1998 and Ecuador in Japan and South Korea in 2002. Since then, however, he has bounced around a few club jobs without making anything approaching an impact anywhere. 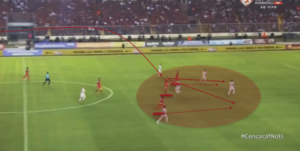 In the attacking phase, Panama will concentrate on using Blas Perez as the focal point for direct passes into the final third. The two wide midfielders come narrow when the ball is played long to feed off any possible flick-ons from Perez. Here he wins the header and Panama have a chance of attacking the penalty area.

In the defensive phase expect to see Panama drop back into a deep block with the three centre backs, two wing backs and a defensive midfielder deep and compact in order to minimise the space that the opposition have to play in.

Against the likes of England and Belgium, in particular, expect to see Panama commit even more players into their defensive structure.

Nominally a defensive player Roman Torres is the captain and heartbeat of the national team. A larger than life figure he will be key in the defensive gameplan than Panama look to put in place in Russia.

He is known as a threat in the opposition penalty area and indeed it was his goal that sealed qualification for this World Cup.

The right-back has impressed over the last 12 months for his club side New York Red Bulls and expect to see him start the tournament at right back for Panama. At club level, Murillo is given more freedom to break forward into advanced areas but, with the national team, his defensive positioning and responsibilities come first.

If Panama are to make an impact in the opponents half then expect to see them do so down the right hand side where Murillo could be key.

At 37 years of age Blas Perez will lead the attacking line for Panama in Russia. He has done so now for the last 15 years during which time he has gained 118 caps and scored 43 goals. Now his mobility is limited but he will still be dangerous in and around the penalty area where his experience and instincts can make a difference.

It remains to be seen whether Perez can manage three games in relatively quick succession but he certainly will not let anyone down whilst he is on the pitch.