Going into this summer’s World Cup in Russia there was a sense that Uruguay had the potential to be a real dark horse for the tournament. They already had a rock solid defensive unit and two genuinely world class strikers in Luis Suarez and Edison Cavani and in the last 12 months, coach Oscar Washington Tabarez had moved to regenerate the midfield of the squad with the introduction of young talents like Rodrigo Bentancur and Lucas Torreira, now the Uruguayan squad has a genuine balance and quality throughout the side.

There is also a sense of intrigue around Egypt this summer with the superb Liverpool forward Mohamed Salah expected to be one of the key players this summer. This was before the forward suffered a shoulder injury during the UEFA Champions League final, whilst he is with the squad at the World Cup, there are still questions over his fitness.

With hosts Russia having dismantled Saudi Arabia 5-0 in the opening match of the tournament, the pressure was immediately on these two teams to get off to a strong start. 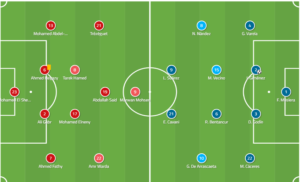 The first thing of note when the team news was released was that Mohamed Salah would start the game from the bench. Amr Warda started from the right-hand side for Egypt in place of Salah but he is a far less effective threat in the final third, looking to hold the width as opposed to moving inside to link in with the forward.

Uruguay started in their expected 4-4-2 structure although the two wide midfielders Nandez and De Arrascaeta are more accustomed to playing inside as opposed to stretching the width of the field. The Juventus midfielder Rodrigo Bentancur played in the centre of the midfield and would be expected to link the midfield and attack for the South American side.

In the first half of the match, we saw few clear-cut chances created with both sides forming effective defensive structures and denying their opponents any clear passing lanes with which to access the final third. 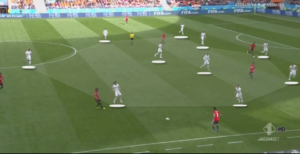 Uruguay defended in their 4-4-2 structure with the midfield and defensive lines remaining compact and closing down the spaces in between in which Egypt could play. Key in putting pressure on the opponents as they look to build up are the front two for Uruguay with Edison Cavani and Luis Suarez both pressing and running for the entire match, indeed, the work rate of the front two would set the tempo for the entire team in the defensive phase. 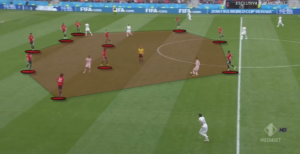 The two defensive midfielders Tarek Hamed and Mohamed Elneny were tasked with shielding the defensive line and although they were effective in the defensive phase they contributed less going forward. 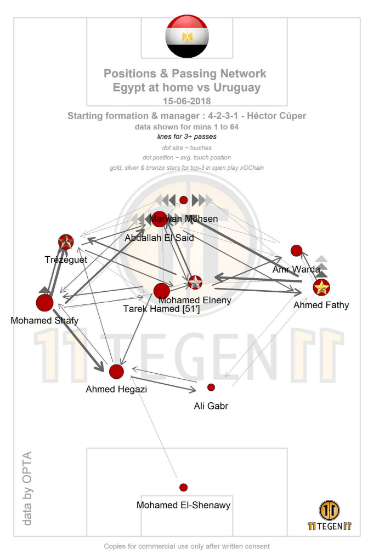 This pass map created by @11tegen11 using Opta data shows that Egypt were more likely to attack in the wide areas with a particular emphasis on the left-hand side of the field. There was a move to build up with initial direct passes from the back to get past the Uruguayan press. From there, the midfield would look to combine.

Uruguay start to play through the lines

As the match progressed into the second half Uruguay started to play more through the lines of the opposition. This was especially evident after the nominal wide midfielders Nandez and De Arrascaeta were replaced by Rodriguez and Sanchez with the former at least, holding the wide area although Sanchez still maintained a more narrow position. 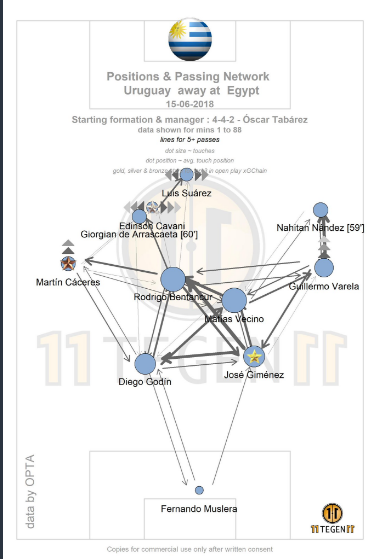 This pass map from Uruguay, again provided by @11tegen11 using Opta data, you can see how centrally-focused Uruguay were in their attacking build up. On the left-hand side of the field, Martin Caceres struggled to get involved from left-back in the attacking phase and you can see that De Arrascaeta is narrow. Rodrigo Bentancur and Matias Vecino were integral in central areas. 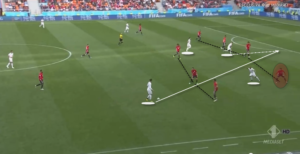 Here, you can see the effect that Bentancur was able to have in the attacking phase. With Sanchez showing short and the right-back Varela out of shot high on the right side, the Egyptian left-back is stuck between two players and his hesitation has pinned him.

Bentancur has the quality when given time to split the defensive line of the opposition and he reads the run for the forward and effectively breaks the midfield and defensive line with a single forward pass. 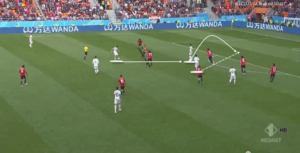 Here again, you see that Uruguay are looking to break through the Egyptian defensive structure in the second half. Again the initial pass is played through the line into the feet of the Cavani in front of the defensive line. He controls the ball and flicks the ball through into the path of Luis Suarez who has made a run forward past the defensive line. Unfortunately, the chance came to nothing as the Barcelona forward delayed his shot.

As the second half progressed we saw Uruguay find more ways through the Egyptian defensive line as they continued to exert pressure going forward.

Uruguay build effectively from the back

With the differences in defensive structure from Egypt and Uruguay we saw that Uruguay were able to build from the back more effectively, When Egypt were looking to play from the back, the two central-defenders were pressured time and time again by Cavani and Suarez leading to them having to play more direct passes with little time.

Uruguay, on the other hand, were able to build more effectively from the back with the lone Egyptian forward pressing on his own and Gimenez and Godin in the defensive line for the South Americans managing to play around the press with relative ease. 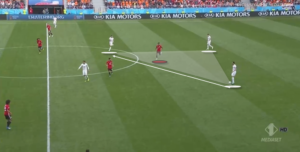 Here, with the Egyptian forward pressing on his own and Said slightly deeper covering the midfielder we see that the Uruguayans had a clear advantage in terms of numbers in passing. Diego Godin has possession and he is able to read the movement of the forward to pass to the free man and move the ball forwards.

A similar image from later in the same half. Again, Egypt are only pressing with one forward player and Uruguay having a defensive base of three players with different passing angles. This time, Diego Godin reads the pressure and is able to burst forward in possession of the ball into the opposition half of the field.

In the end, it took a last-minute header from the Atletico Madrid defender Jose Gimenez to settle the match as Uruguay struggled to take advantage of the chances they had created with Luis Suarez in particular guilty of wasting opportunities.

The expected goals, again from @11tegen11 using Opta data, saw Uruguay ahead with 1.57 as opposed to 0.42 for Egypt. There was a clear difference in terms of opportunities with Egypt clearly missing the dangerous Salah who never came off the bench.