The 2018 FIFA World Cup final is set, but it’s never too late to track back and explore the tactical nuances of earlier matches. Saudi Arabia and Egypt played each other on the final matchday of Group A. Although both teams were mathematically eliminated, each side felt they had something to fight for. Let’s explore how Saudi Arabia managed to overcome early embarrassment to defeat Mohamed Salah’s Egypt. 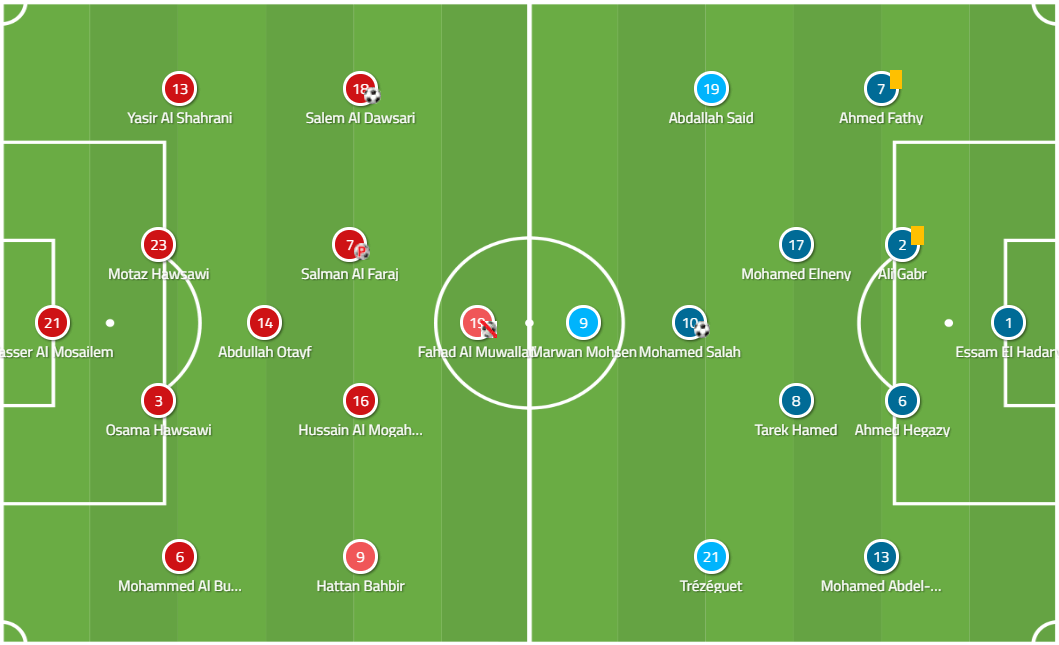 The fight for third-place in Group A quickly became a bid to be less bad than the other side. Both Egypt and Saudi Arabia defended appallingly, especially early on. In the first half, Mohamed Salah was the “X” factor that Egypt needed to take the lead. He was positioned often as a second striker, sitting behind Marwan Mohsen or overlapping him. Trézéguet was also a major attacking threat for the Egyptians.

Juan Antonio Pizzi’s gameplan for Saudi Arabia is built around the concept of possession, something we’ve seen often in the highest European leagues. The issue with playing a highly technical style with the Saudis is that, one, they aren’t accustomed to playing often together and, two, they aren’t particularly skilled on the ball. Saudi Arabia kept the ball more than Egypt, granted, but they weren’t effective with possession. Particularly, in the first half. 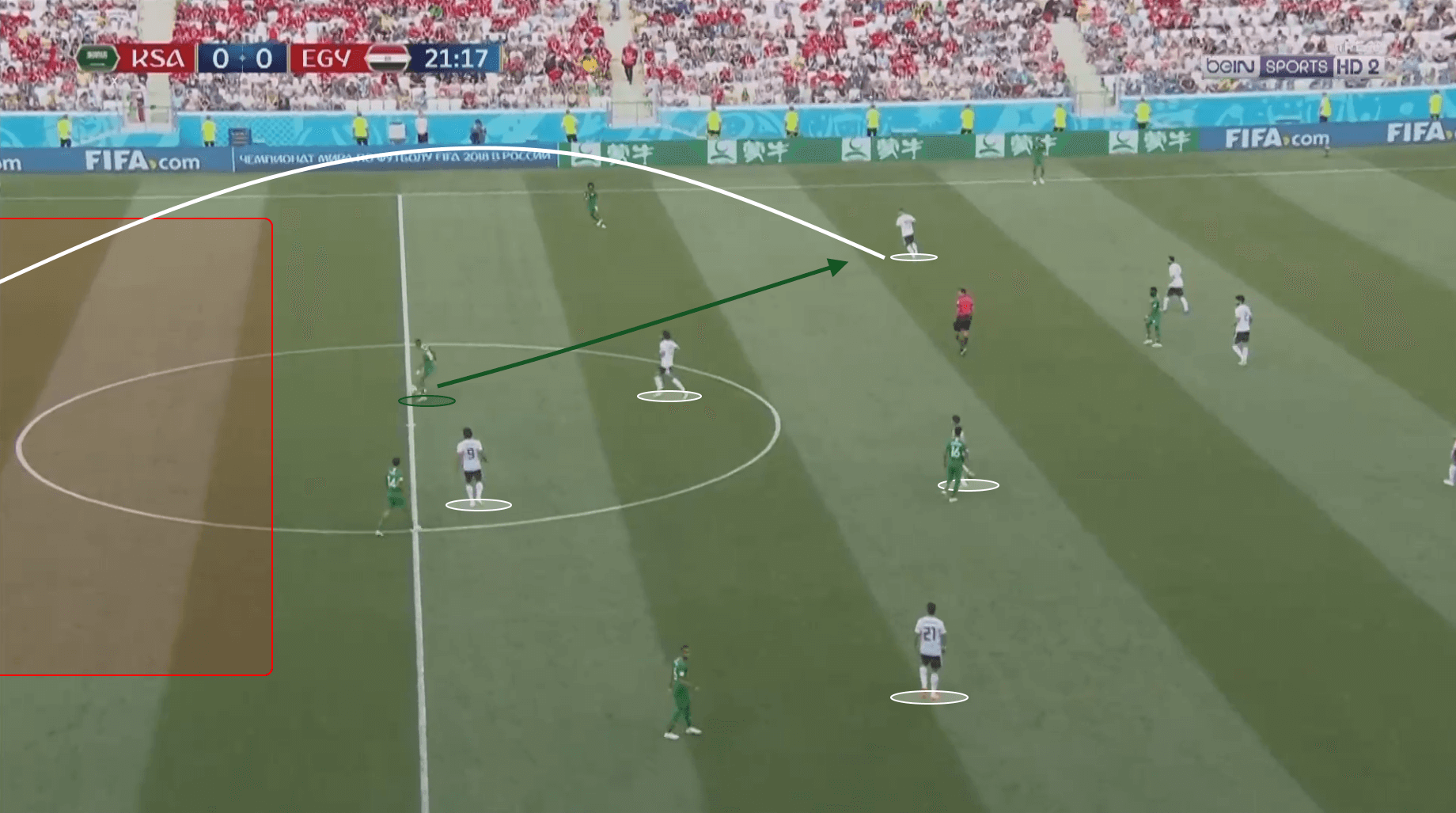 We see in the above screenshot a Saudi side building through the midfield. Note that two center-backs are out of picture on the left, along with Salah. A Saudi Arabian midfielder tries to play a direct pass through the lines but is intercepted by Abdallah Said. With the two full-backs high up the pitch, Salah only has two defenders to beat on the run.

Said had time to pick out an accurate ball — leading to a goal — because of Saudi Arabia’s possession-oriented positioning. Both full-backs are high and wide, hardly good positions to defend against direct passing. Besides that, three midfielders are close together in the center of the pitch while the attackers are high and spread out. Nobody is even close to Abdallah Said. 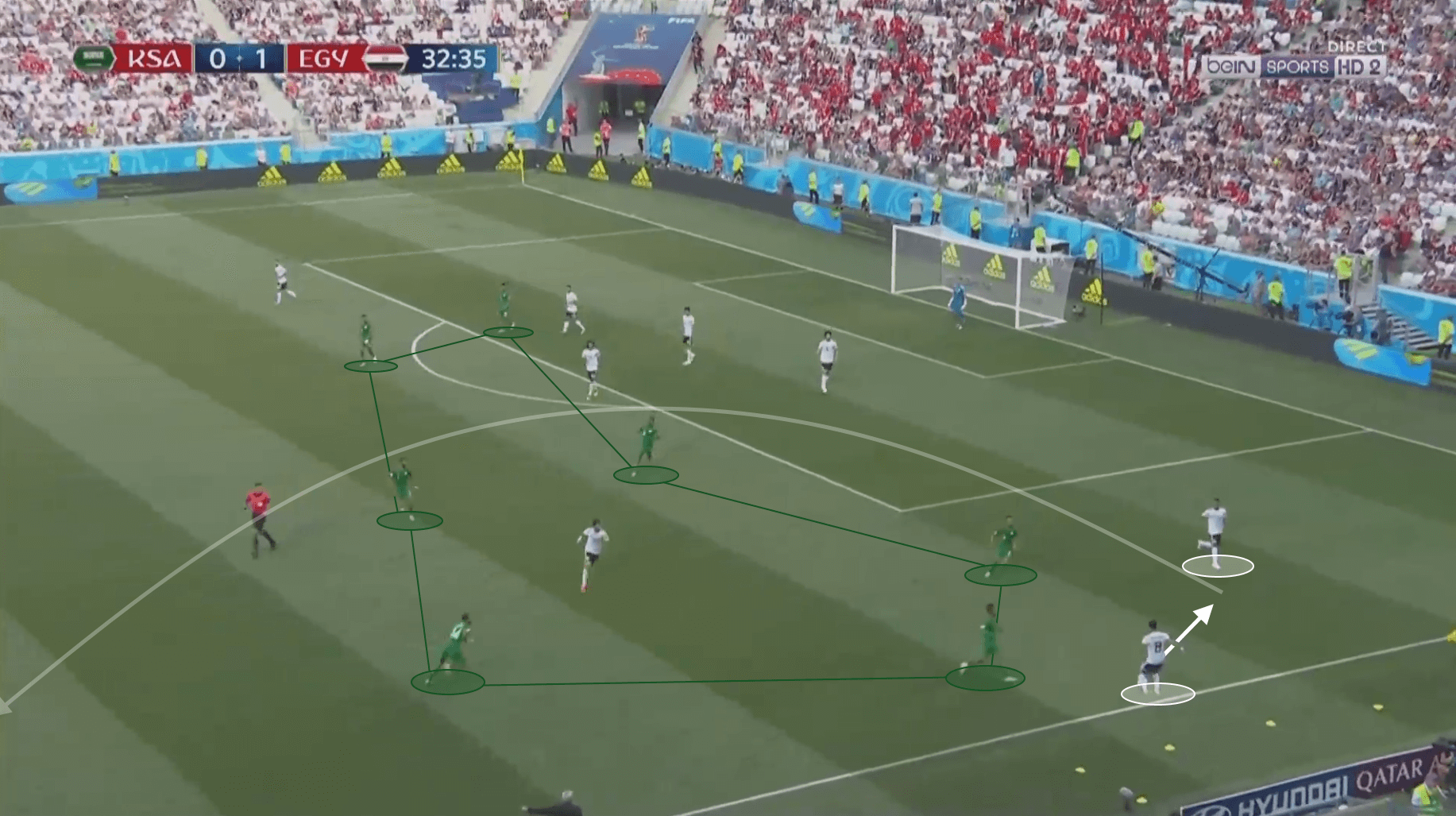 This inability to defend long balls became even more apparent when Saudi Arabia pressed high. Even though the center of the pitch was well-contained, we see that Pizzi’s side left only three defenders back. With the Saudi midfielders pushed up tight, Egypt had no trouble bypassing the press with a long ball. Egypt could have gone 2 or 3-0 up if Trézéguet and Salah were more clinical.

Egypt were granted plenty of chances after bypassing Saudi Arabia’s defence. Most notably, Mohamed Salah missed a one-on-one with the ‘keeper: a blunder for the scrapbook. After lucking out, Saudi Arabia went on the front-foot. A clear pattern of attacking down the left flank developed, and it came to fruition with two penalties in the first half (one was saved). 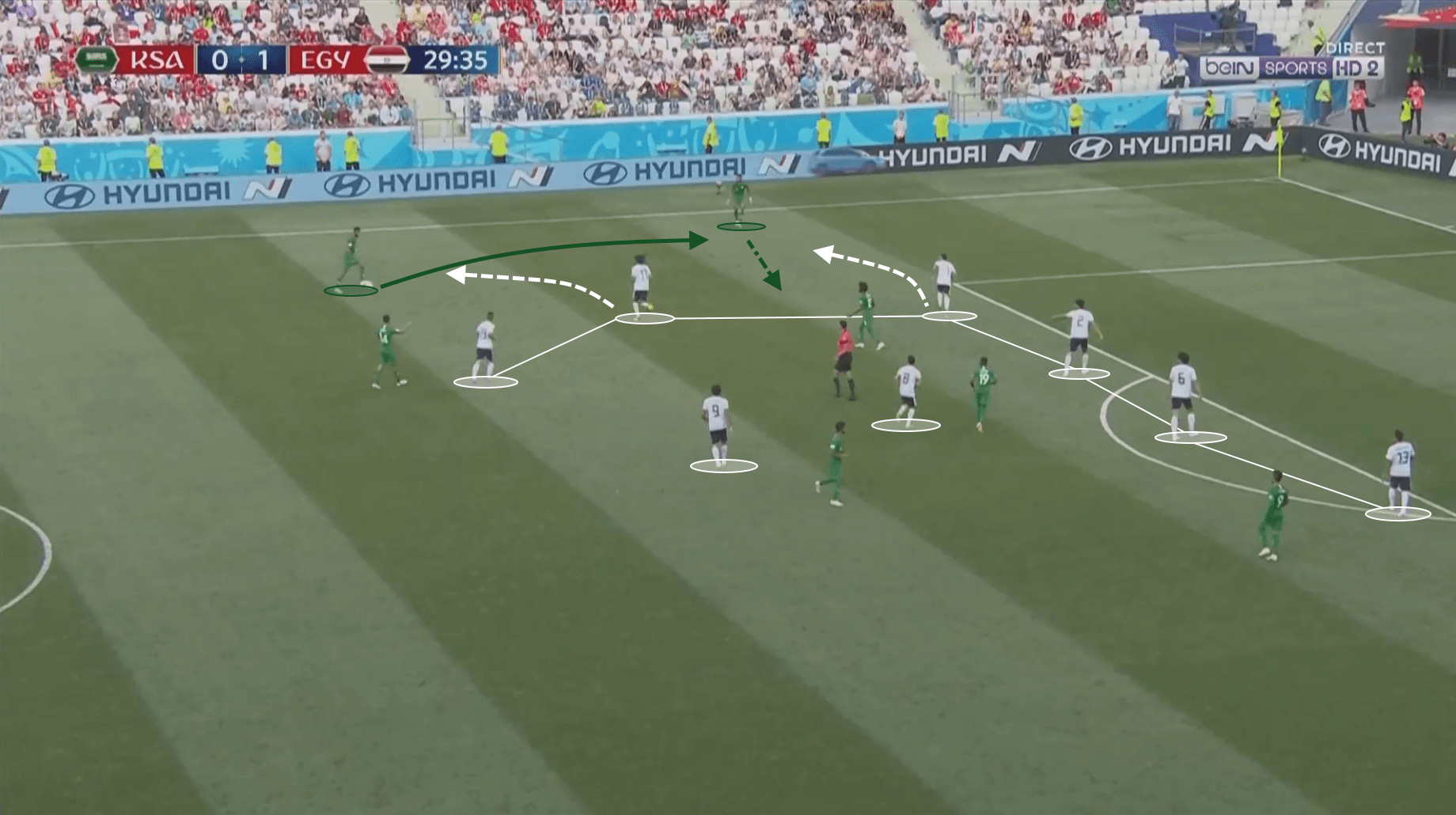 We see that Egypt’s defensive positioning restricts movement centrally, but this left the flanks slightly vulnerable. With a bit of penetration, Saudi Arabia are able to attack the left half-space and fashion a decent opportunity. Mohamed Elneny, marking the ball-carrier, is dragged wide because of Egypt’s narrow setup. Once the pass is made to Salem Al Dawsari, he has to only beat one man to access the half-space. 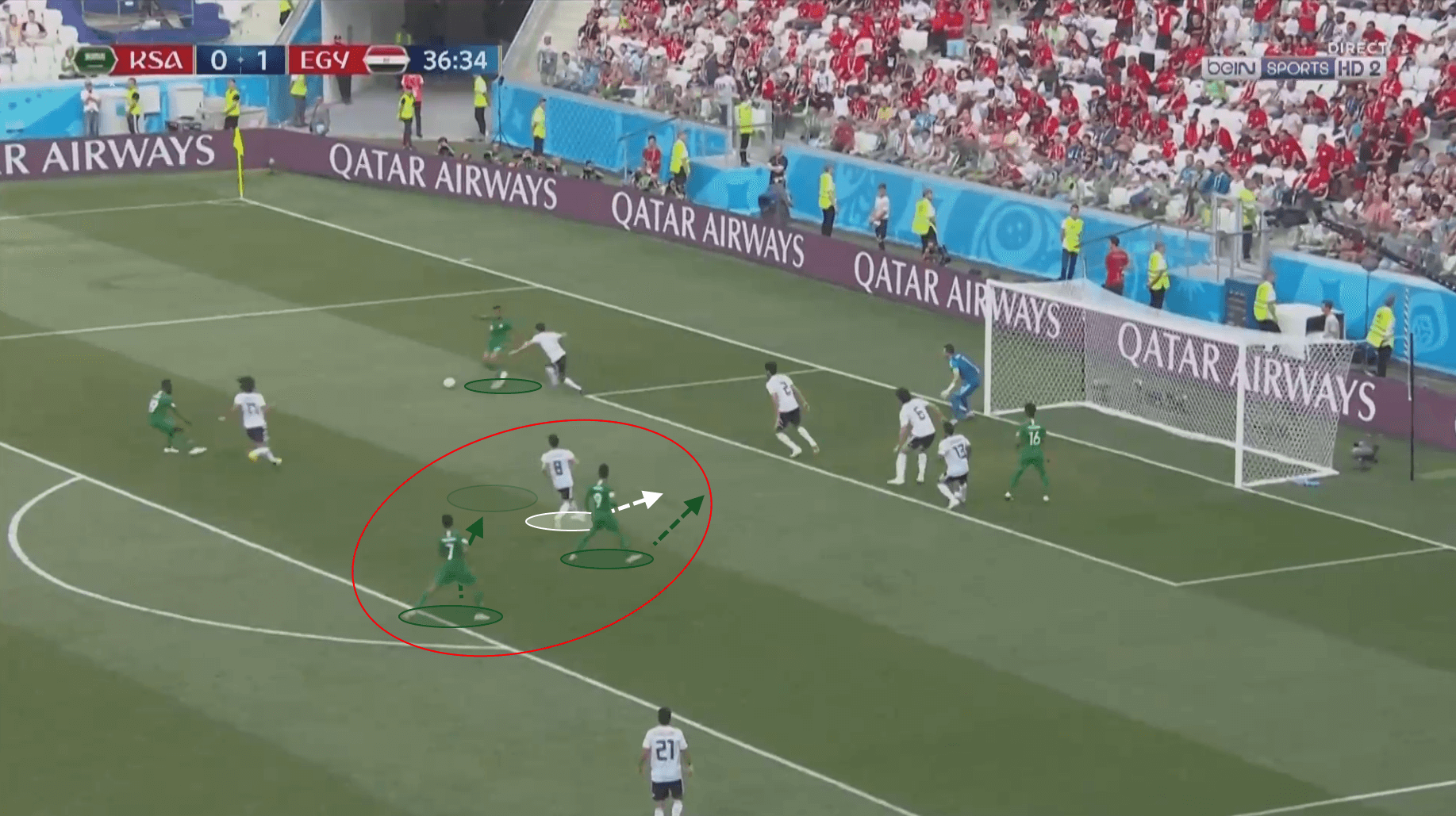 Because of this overloading, Saudi Arabia were able to get into the box a few times. We noticed earlier that Saudi Arabia committed many bodies forward, which led to their defence being exposed. However, this en-masse onslaught helped in scenarios such as this. With the ball in the box, Egypt are desperately blocking a good shot at goal. This leaves only Tarek Hamed in the center marking two players. Hattan Bahbir commands the attention of Hamed, leaving Salman Al Faraj the space to get a shot off. This was certainly a position of weakness for the Egyptians, despite the fact that this play didn’t result in a goal. 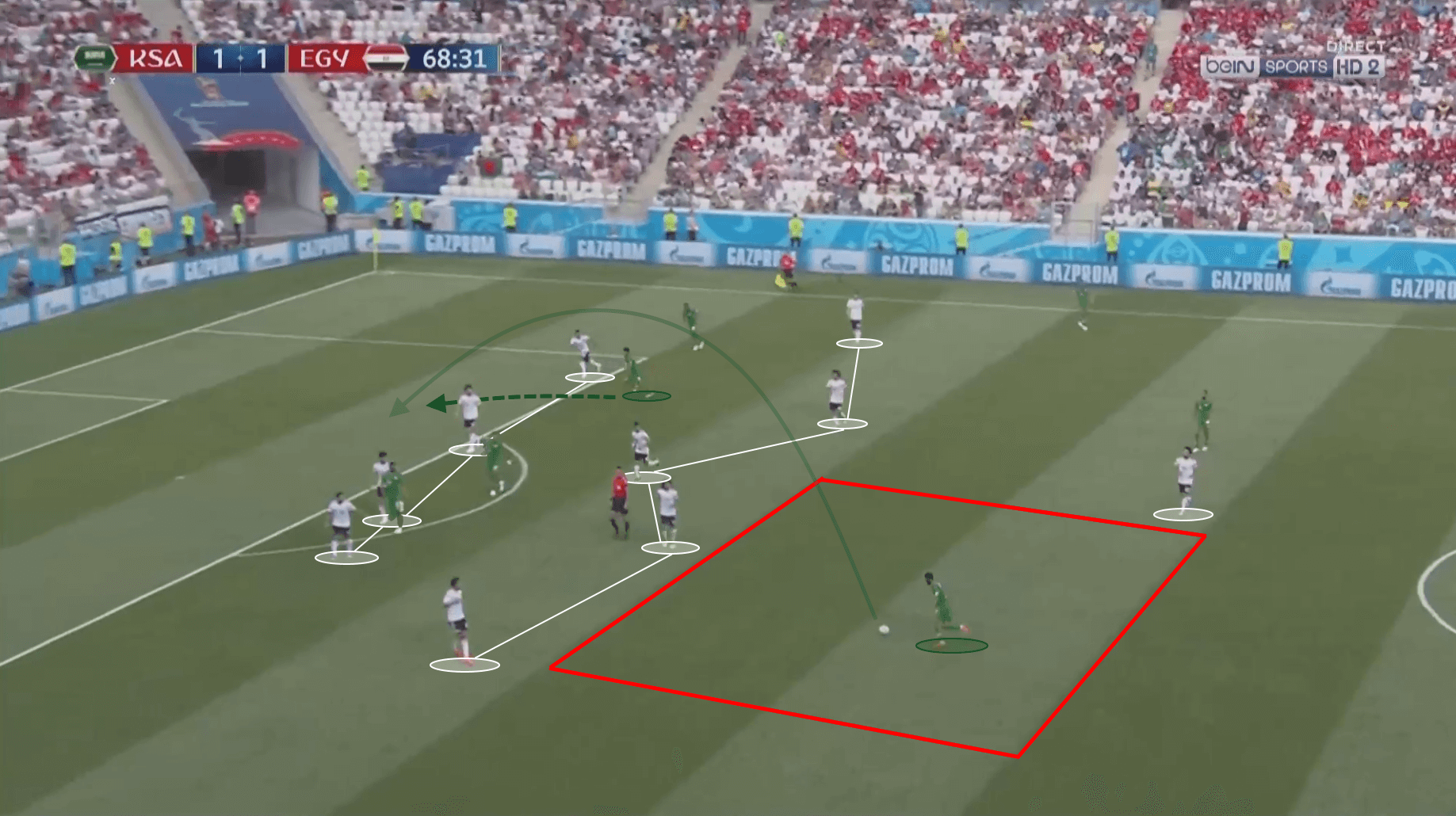 The second half was largely a dull affair, which benefitted the measured-minded Saudis. As Egypt absorbed pressure, they sat back in a 4-5-1 deep block. While Saudi Arabia were restricted space in the final third, they managed to find a few passes over the top. Here, a run in behind the defence leads to a great chance for Saudi. It was made quite simple due to the lack of Egyptian pressure on the ball.

In the end, Saudi Arabia’s pressure on a compact Egypt defense paid off. Al Dawsari scored a late winner to give Pizzi’s side their first World Cup win since USA ’94. It was an unfortunate way for Egypt to end their summer, bowing out with no points to bring back home. It has to be said that neither side deserved to advance past Uruguay or Russia, but we can infer many things from their successes and failures.