This match may have taken place on the second full day of the 2018 World Cup in Russia but in all honesty it was over the course of these ninety minutes that the World Cup truly came to life.

Before the match the focus and indeed the media narrative was firmly surrounding the Spanish camp. The decision on Wednesday afternoon from the head of the Spanish federation to sack head coach Julen Lopetegui after he had accepted an offer to take over as coach of Real Madrid after the World Cup had thrown Spanish preparations in to disarray. The federation was quick to move and appoint the former Spanish international Fernando Hierro, who was an integral part of the national team setup already, as the new coach but there was genuine intrigue as the World waited for the Spanish to start, would this change have a damaging effect on the Spanish? The answer in a word, no.

Portugal on the other hand are entering the tournament somewhat under the radar, strange given that they are the current European champions. They were keen to put the Spanish under pressure immediately from the outset with their talisman Cristiano Ronaldo at the middle of everything that they did well.

Spain favour their left side

Rarely have I seen one side dominate possession to such an extent (66% to 34%) with so much of the possession happening on one side of the field. With the Real Madrid right back Dani Carvajal still not fit to start the match following his injury in the Champions League final Spain chose to start with his fellow Real Madrid man Nacho at right back. Whilst he was a reasonable defensive asset he offered little in the way of attacking threat, until that is he blasted home a contender for goal of the tournament for the Spanish third goal in the second half. 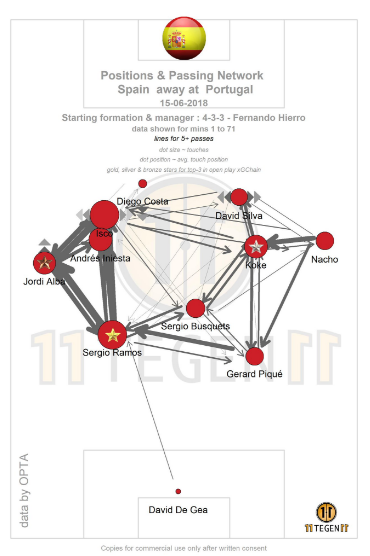 As we see from this passmap, supplied by the excellent @11tegen11 using Opta data, there was a clear preference from the Spanish for the left side of the field. Here Isco, Iniesta and Jordi Alba in particular were key in rotating in and out of pockets of space to disrupt the defensive block of the Portuguese. Here we see Spain in possession with Andres Iniesta inside the Portuguese half, Isco and Jordi Alba are also highlighted. Time and again we saw the same passing combination from Spain as the initial pass is a penetrative pass breaking the Portuguese line and finding Isco just behind them. This pass forced the beaten defenders to turn towards the new position of the ball and Isco fired the pass straight back to Iniesta before the Barcelona man played the pass out wide to Alba around the defensive block.

The first two passes are very deliberate and designed to freeze the defenders centrally and ensure that when the ball is played out in to the wide area the man receiving possession has time and space to advance forward. 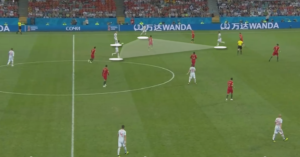 Here again we see the close connections that the Spainsh built on the left hand side as they moved the ball forwards towards the final third. The man in possession of the ball tended to have at least two passing lanes when on the ball and Spain were able to manipulate the ball forwards with ease.

Portugal start to press high in the second half

With Spain clearly dominating possession of the ball the Portuguese had to find a way to counter this and provide an attacking threat of their own. 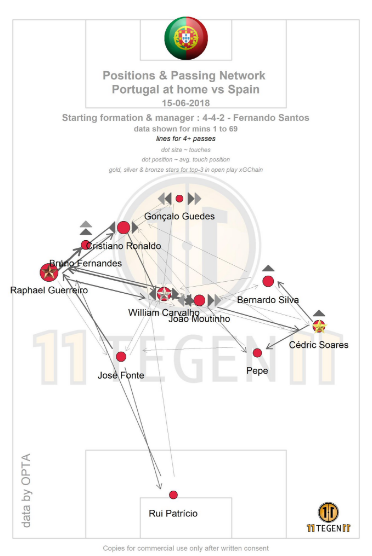 As you can see from the Portuguese pass map, again provided by @11tegen11 using Opta data, there were far less clear passing combinations from the Portuguese side. Instead they looked to play largely in transition using direct passes in to key areas and ensuring that they had runners moving forwards to support Cristiano Ronaldo and Goncalo Guedes.

In the second half when the Spanish scored two in quick succession to take a 3-2 lead we also saw Portugal commit more men forward to press in a higher block. 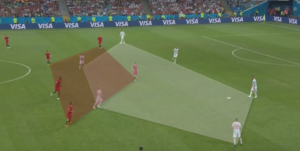 Here you see that with Sergio Ramos in possession Portugal are pressing in a much higher block. They are forcing Sergio Busquets and Andres Iniesta to play in much deeper positions. As the match wore on this pressing forced the Spanish to play deeper and deeper eventually forcing the mistake as the free kick was conceded from which Cristiano Ronaldo scored the equaliser. 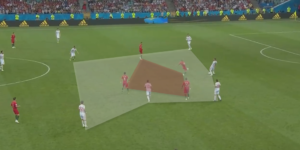 Again we see that Portugal are hunting and pressing for the ball in a pack as the Spanish are put under more and more pressure. They were especially quick to shut down the likes of Sergio Ramos and Gerard Pique looking to block any passing lanes, as you can see above, and prevent the ball from being played from defence in to the midfield areas of the pitch.

Under the now former coach Julen Lopetegui Isco or Real Madrid had emerged as the star and key player of this Spanish side. Early signs from the new regime suggest that nothing has changed as Isco was by far the stand out player on the field, this was despite the fantastic Cristiano Ronaldo scoring a hat trick, and Isco dictated everything that was good the Spanish.

Isco completed 94 passes with a 94.7% completion rate. Given that he tended to play in such a high and congested area of the field these statistics are incredibly impressive. 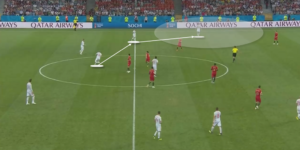 Time and time again we saw Isco find pockets of space whether in wide areas, as above, or between the lines of the Portuguese defensive structure in central areas. Wherever he was positioned we tended to see the Spanish look to deliberately play through him with his ability to take the ball and manipulate it through tight spaces.

Above we see Spain quickly recognise that Iniesta is free and in space with the ball being quickly fed out to him.

For all of Spain’s dominance in possession and for all that they weaved magic through their passing combinations in and around the final third of the field you still have to say that a 3-3 draw was the fair result.

Cristiano Ronaldo was his irrepressible best and he was able supported by a young supporting cast with fresh legs willing to do the running for him. The Spanish showed character to come from behind twice and that will stand them in good stead for the tournament as a whole.

As you can see the expected goals were also close with Spain coming out on top 1.55 to 1.11. A tight game between two sides that should qualify for the knockout stages comfortably.

If you enjoyed this match analysis then check out others on the site with Russia Vs Saudi Arabia and Egypt Vs Uruguay already posted.