It is fair to say that expectations were relatively low for the first match of the 2018 World Cup with the hosts Russia facing a Saudi Arabia side that were something of an unknown to the wider world. Russia had of course not played a competitive fixture since they hosted the Confederations Cup last summer, a tournament in which their performances could perhaps be best described as insipid.

With that said it is unlikely that anyone predicted that the hosts would run our 5-0 winners with some excellent examples of finishing and interplay in the final third of the field. Russia were excellent going forward although in all honesty they were not tested defensively by a Saudi Arabian side who were tidy in possession for short periods but at no point looked as though they would break through the Russian defensive block. All of this was achieved despite a first-half injury that forced Alan Dzagoev off of the field, given that Dzagoev was expected to be one of the key players for the Russians during the tournament this could well have been a huge negative, instead they handled the setback well and continued to find ways to play through the Saudi defence.

It remains to be seen whether Russia can continue this form going forwards against Egypt and then Uruguay in the final group game but if they are able to get a positive result in the second group game then there is a real chance that we could see the hosts progress to the latter stages where with home support they could provide a difficult obstacle. 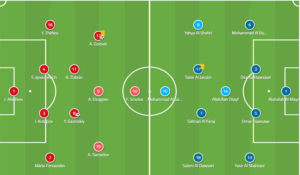 The first surprise came with Russia opting for a four-man defensive unit as opposed to the five-man defensive line that we were initially expecting. Alan Dzagoev played centrally as the main link to Fyodor Smolov in attack with Alexey Miranchuk consigned to a place on the bench.

The main surprise in the Saudi Arabian line up lay in the fact that Juan Antonio Pizzi left out Fahad Al-Wuwallad who had been expected to play a key role in the attack for the Saudi side.

Russia attack down the right side

During the first half, in particular, Russia enjoyed great success attacking down the right-hand side of the field in their attacking phase. For Saudi Arabia, Yasir Al-Shahrani at left back was one of the most impressive performers although that was more in an attacking sense. Defensively he struggled to cope with the constant overloads that Russia were creating with clever movement and runs from deep.

Aleksandr Samedov played well on the right of the midfield for Russia but it was the Brazilian born Mario Fernandes whose runs from deep really stretched the opposition defensive block. 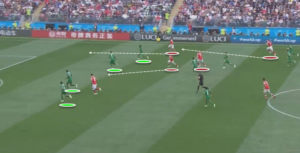 Here you can see the poorly organised defensive line for Saudi Arabia with the four-player arrayed out of line and poorly spaced. As Russia advance with the ball in the right half space they have four players attacking a specific vertical zone. Both Samedov and Fernandes advance in the wide area attracting the opposition left back out to close down the space.

This movement outside opened up the space for the free player in the right half space to cut inside and run towards the edge of the penalty area. This creates an opening for an easy pass to be played through and for a chance to be created for the Russians. 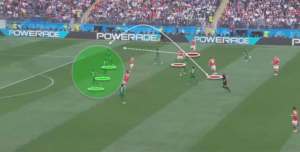 Once again in this example, we see that the Saudi Arabian defensive line is poorly organised. Three defenders are caught too compact with little in the way of cover in either wide area.

Two Russian players are advanced and central and this keeps the three Saudi players pinned back in the central area. Mario Fernandes has already taken up a high line up on the right-hand side of the field. A simple clipped pass from the man in the centre sends Fernandes running in behind the Saudi back line and once again Russia are able to create a chance.

Saudi Arabia poor in possession of the ball

Much has been made of the decision in 2017 of the Saudi Federation to arrange for a group of young players to be sent to clubs in Spain to further their development and indeed with the appointment of coach Juan Antonio Pizzi, Argentinian born but an international with Spain, there was a real sense that the Saudi’s would try to implement a Spanish model of play. Indeed we saw a few moments of neat combinations but these were largely without substance or any threat to the Russian defence. Instead, we saw the ball turned over poorly again and again as Saudi Arabia looked to transition into their attacking phase. 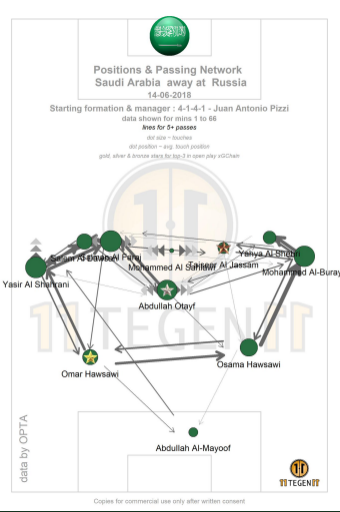 This pass map, supplied by the excellent @11tegen11 using Opta data, shows that Saudi Arabia were decent in possession of the ball, indeed they enjoyed 61% of the possession in the match but they also failed to threaten the goal of Igor Akinfeev and penetrate the Russian defensive block. 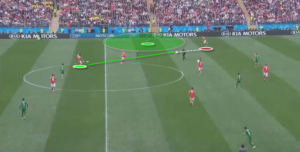 The two central defenders for Saudi Arabia were especially poor in possession of the ball as they failed time and time again to pass the ball forward in any meaningful way. Here we see Omar Hawsawi in possession of the ball and although he is under slight pressure from the Russian player moving on his blind side his passing lane to the left back, Al-Shahrani, is open. Instead, he mishits the pass and the ball is collected easily by Mario Fernandes.

These moments of poor play in possession were especially dangerous as Russia were able to launch quick counter-attacks in transition. 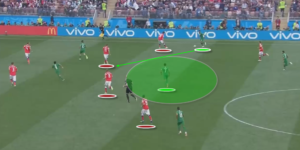 Again here Saudi Arabia are looking to attack and there is an easy passing lane open to a man in open space centrally. Instead of shifting the ball into the free man and opening the chance of a through ball into the final third of the field the man in possession inexplicably passes the ball straight to the Russian midfielder.

These lapses in technique and concentration cost the Saudi side again and again as they failed to build genuine attacking momentum.

The CSKA Moscow midfielder was already highly touted before this match began and his performances at the heart of everything that was good for Russia will have only served to increase interest and indeed increase his price tag.

Strongly linked already to Arsenal Golovin started on the left-hand side of the attack where he would look to cut inside on to his right foot to play in central areas. When Alan Dzagoev went off with an injury in the first half we saw Golovin move centrally where he was even more dangerous with his range of passing from the central area opening up the whole field for Russia. 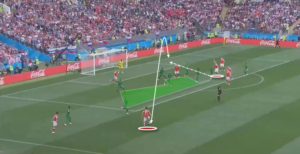 Here we see Golovin creating the first goal with a perfectly weighted and angled cross into the far post. Whilst the Saudi Arabia defensive block leaves much to be desired here the quality of the cross and the ability of Golovin to recognise where to position himself to receive the ball and support his teammate was key.

As Golovin takes possession with space and time he recognises that there is space on the far side and an easy cross takes out the entire Saudi defence for the first goal. 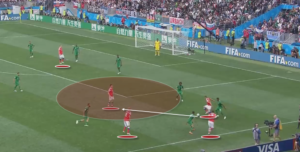 Here we see the lead up to another Russian goal with Golovin again claiming the assist. This time we see the space that the midfielder has occupied in space at the edge of the opposition penalty area. Once again the Saudi Arabians are poorly positioned defensively and they have failed to read the threat that Golovin poses to them.

As he receives the ball he again has time and space to turn and pick out the cross to his teammate for a straightforward headed goal.

It is commonly said that it is important for the host team to get off to a strong start in international competition. This was certainly the case here with the Russian people getting firmly behind their team as they swept their opponents away. There is no doubt that Russia will face tougher opposition but you can only beat what is put in front of you.

Using expected goals data, again supplied by @11tegen11 using Opta data, we see that Russia had the higher xG score 1.68 to just 0.2 for Saudi Arabia. This reflects the quality of some of the finishes from Russia with them scoring from chances that yielded a low score in expected goals.