It was the big highlight of the Quarterfinals. Brazil vs Belgium, many expected an offensive spectacle and, in the end, both teams showed their qualities. However, not Brazil reached the next round, it was Belgium, the Golden Generation played great counter-attacking football. In a tight game with lots of chances for both teams, Belgium could secure a 2-1 win and advanced to the next round where they are going to face France.

Brazil had to replace Casemiro who couldn´t play due to his second yellow card against Mexico in the Round of 16. Therefore, Tite brought in Fernandinho to cover the space before the back-four. Furthermore, Marcelo was back in the starting line-up. Besides those changes, Tite selected the same starting eleven as against Mexico. In their common 4-3-3 Neymar, Willian and Jesus attack in the first line while Paulinho and Coutinho supported them out of the midfield. Thiago Silva and Miranda were the two centre-backs while Fagner defended on the right-side, for Belgium he was a potential weakness of Brazil´s defence. 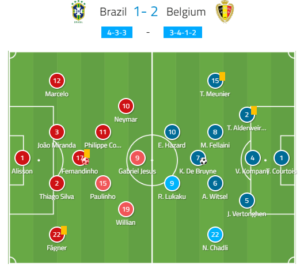 Belgium on the other side started quite interesting. The formation from above was sometimes observable during the build-up. When Kompany, Alderweireld and Verthonghen tried to find openings in Brazil´s defence. Defensively Belgium defended in an interesting 4-3-1-2/4-3-3 with Fellaini, Witsel and Chadli in front of the back-four. De Bruyne played in the centre, most of the time a little bit deeper compared to the wide positioned Lukaku and Hazard. This defensive line-up was crucial for Belgium´s focus on counter-attacks and also hard to overcome for Brazil.

As I pointed out above Belgium defended in a 4-3-3/4-3-1-2. During the build-up of Brazil, you could observe that Lukaku and Hazard defended the halfspaces while De Bruyne covered the space in the centre. They tried to close down passing options in the centre, but rarely did they press aggressively or high up the pitch.

When the first line of pressure got overplayed by Brazil Lukaku and Hazard were allowed to stay wider and didn´t have to participate defensively. Both had the task to wait in a wider position in order to stretch the Brazilian shape and take advantage of the spaces which Brazil left.

The rest of the team shaped in a 4-3-1, the three central midfielders covered the spaces between the defenders in order to deny through balls while the fullbacks defended Brazil´s wingers and often followed them when they moved into the midfield. De Bruyne had the task to deny switches by closing the space or covering Fernandinho. Furthermore, he was the guy who had to bring up the ball in transition. Due to his higher role, he could take advantage of the space Brazil left in the centre. Therefore, we saw a lot of counter-attacks in which De Bruyne dribbled with the ball in the central space and then used his vision to find Lukaku or Hazard.

The 4-3 with the back-four and the three central midfielders was really compact and hard to break through for Brazil. They could rarely find a passing option between the lines. Furthermore, Belgium could easily double the wingers. Against Willian/Douglas Costa and Neymar the fullbacks would face the ball carrier and try to stop him while the ball near midfielder would shift to that side and close the way into the centre. On the right side Meunier defended very well against Neymar, still, Brazil could cross the ball in multiple times which sometimes causes dangerous situations.

But Belgium´s defending was far from perfect. The central midfielders didn´t manage to hold their position constantly, too often they would drop too deep which opened space for Brazil to switch or shoot from distance. The lack of pressure was also a problem when Brazil circulate the ball. Especially, in the second half, Belgium´s midfielders couldn´t manage to apply pressure, therefore, Coutinho or Neymar could play passes between the lines.

In the example above, Fellaini is positioned too deep while De Bruyne stayed higher because of Fernandinho. Therefore, Brazil overloaded the space in front of the defence and could easily switch sides and attack the box. Brazil´s goal was also a good example of the issue of Belgium. They didn´t press effectively, that’s why Coutinho could chip the ball in.

Brazil´s offence in the first half

As I mentioned above Brazil also attacked a lot and had good chances to score. In the first half, all those chances resulted out of shoots from distance. Their main problem was the lack of players between the lines. Usually, Jesus and Paulinho moved into those spaces. But Paulinho is not the kind of player who feels comfortable in tight spaces. So, in the first half, Brazil couldn´t find a way through the defence of Belgium. Coutinho started most of the attacks out of the halfspace and tried to connect with Marcelo and Neymar on the left side.

There they tried to create 1v1 opportunities, for example with Neymar or Coutinho and Marcelo in the halfspace against the slower Fellaini. On the right side, Willian didn´t manage to take advantage of the slower Vertonghen and just crossed the ball in which didn´t create anything dangerous. Fagner rarely could support him due to Belgium´s strikers. When the ball travelled to right-side Brazil didn´t support Willian there and couldn´t find ways back in the centre either. As a result of the bad positioning in the right halfspace, Brazil was vulnerable for counter-attacks on that side. Belgium could take advantage of that.

In the example above, you can see the problems caused by Brazil´s bad structure in the first half. They didn´t occupy the centre well enough and had only a few players who stayed deeper in order to stop counter-attacks. Besides that, their structure was too flat during the attacking process. As a consequence, no one was able to counter-press immediately after they lost the ball. Belgium could quickly make use of the open spaces in the centre.

Roberto Martinez had a fantastic match plan. Compared to the game against Japan Kevin De Bruyne played higher up the pitch which involved him in more attacking combinations. The higher role suited more to his abilities and therefore he was one factor that hurt Brazil.

Furthermore, Lukaku and Hazard both positioned wide even during the defensive phase. They did have much defensive work to do and could stay higher simply to take advantage of Brazil´s weak structure. Another consequence was that Fagner couldn´t support Willian while Fernandinho had to stay deeper as well. Brazil missed those players offensively in the first half. However, Fernandinho pushed higher a few times which caused problems because no one covered the central space.

Hazard and Lukaku´s wide role caused a lot of problems during the transition. They stretched the back-three of Brazil. Consequently, De Bruyne or Hazard could easily play through balls. Furthermore, Belgium always pushed the ball into the central area which gave them enough possibilities to attack the open space behind Brazil´s defensive line.

Usually, their aim was to switch sides during the counter-attack. So, after they won the ball they played the ball to either Lukaku or Hazard or De Bruyne dribbled with the ball into Brazil´s half. After they passed the ball to their strikers, the objective was to dribble into the central space. From there on they usually fulfilled the switch and tried to find the players positioned in the ball far halfspace.

Fellaini and Chadli usually moved also forward in order to support the attack and to have the possibility to win the second ball. After Brazil lost the ball they concentrated on closing one side by pushing to that side. Consequently, Belgium could find space on the ball far side.

The way Belgium played those counter-attacks was perfect. The played the pass to the wingers very late which forced Brazil to stay compact in the centre. Consequently, Belgium received space outside, here Lukaku and Hazard. Brazil´s defenders had to defend the attack and full speed by moving backwards and simultaneously observing the ball carrier and their man which were in different fields of vision. Therefore, Belgium´s attackers had an advantage as soon as they could start the counter-attack and move into the central space.

De Bruyne´s goal resulted out of a similar situation.

During halftime, Tite made some adjustments in order to change the result around. With Firmino for Willian, he changed the offensive structure. Now Jesus played on the right wing and later got replaced by Costa. Neymar moved more into the centre, together with Firmino he positioned between the lines and was more involved in the combination play. Furthermore, Coutinho had a deeper role and tried to find the offensive players between the lines or he was responsible for switches. Paulinho as well positioned deeper and moved out of that deeper positioned in the box. In the first half, he almost always stayed higher. Due to the deeper roles of Coutinho and Paulinho Brazil had more players to win the second balls while still maintaining the offensive presence.

Because of the deeper position of Belgium´s defence and the improved structure Brazil could move the ball quicker closely to the box which brought some good chances. For instance, Marcelo received the ball on the edge of the box and could easily play a pass to Jesus on the other side, out of that situation resulted in the penalty Brazil should have received.

In second half Brazil more and more focused on the centre, Neymar dropped deeper and together with Coutinho, he could start the attacks by playing passes between the lines due to the passive pressing of Belgium. Brazil played those attacks with more speed and was sometimes able to lure Belgium out of their deep position which helped them to find spaces behind the last defensive line. Nevertheless, Belgium remained compact enough around their own box to force Brazil to a lot of shots from distance.

Their improved structure helped Brazil to prevent more counter-attacks of Belgium. However, Belgium could sometimes manage to counter-attack quickly. But, Brazil was quicker in counter-pressing while Belgium lacked the energy to really push forward with the hole team. In contrary, they sometimes even left space which Brazil could then use for their own counter-attacks.

In the second half, Brazil not only dominated the game in possession, their pressing along with the suboptimal build-up structure of Belgium led to chances and quick attacks of Brazil.

In the end, Brazil couldn’t score the equalizer, although they were the dominant force in the second half in which Belgium couldn´t be dangerous through counter-attacks anymore. Brazil pushed Belgium in their half and moved the ball around nicely. Especially, after the goal, Brazil had multiple chances with Coutinho and Renato Augusto. But Courtois was in great form and Brazil didn´t have the luck on that evening. You could argue that Brazil was the better team over the 90 minutes, although both teams played on a great level. So, it is not completely undeserved, based on the first half that Belgium now faces France in the next round.