Brazil might have crashed out at the quarter final stage of Russia 2018 but the future still looks good for the Seleção. Reports suggest that Tite is going to sign a new deal and there is a talented generation of young players coming through to challenge and strengthen an already star-studded squad.

Of this promising batch of prospects, Vinicius Junior may well have received the most hype but his former Flamengo teammate Lucas Paquetá is arguably just as exciting, with Liverpool, Chelsea and Manchester City just a few of the clubs interested in triggering his €50mil release clause.

Named after Ilha da Paquetá – the small idyllic island in the Guanabara Bay where he hails from – the classy playmaker has been on the books of Flamengo in nearby Rio de Janeiro since the age of eight.

Paquetá began to make waves at the 2016 Copinha and then was called up for the Brazil squad for the 2017 U20 Sudamericano. Despite having a talented team including the likes of Richarlison, David Neres and Guilherme Arana, Brazil failed to qualify for the U20 World Cup in South Korea with Paqueta only able to show flashes of his talent

Despite this disappointment at international level, back at Flamengo the arrival of Reinaldo Rueda, the suspension of Paolo Guerrero and injuries to other forwards saw Paquetá tasked with playing a false nine role for the Rio giants. He ended up with 17 league appearances in the 2017 Brasileirao and also scored goals in the final of the Copa Brasil and Copa Sudamericana. Although Flamengo lost both finals, Paquetá had properly announced himself.

Initially seen as more of a number 10, Paquetá has morphed into more of an all-round attacking midfielder and has been one of the revelations of this year’s Brasileirao. At the time of writing, he has 3 goals and 1 assist in 10 games as Flamengo sit top of the table, as well as having helped the Rubro-Negro progress to the knock out stage of the Copa Libertadores for the first time since 2010.

The youngest player on Tite’s provisional 35-man squad and chased by a bevvy of Europe’s elite, just what makes Paquetá such a special talent?

Blessed with poise, technique and a dazzling array of skills, Paquetá evokes memories of Brazilian playmakers from a bygone era. His fancy footwork and flair can thoroughly embarrass defenders in one-on-one situations but, having said that, he is far from a highlight reel show pony.

With such creativity, quick feet and pace, Paqueta is an excellent dribbler, averaging 2.2 per game this season, and a real threat when given space to exploit. 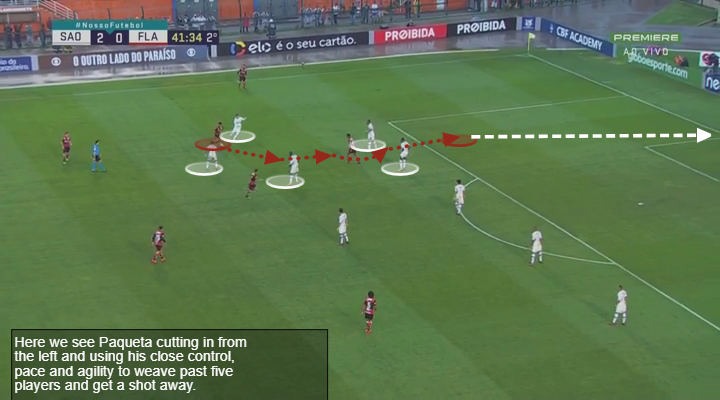 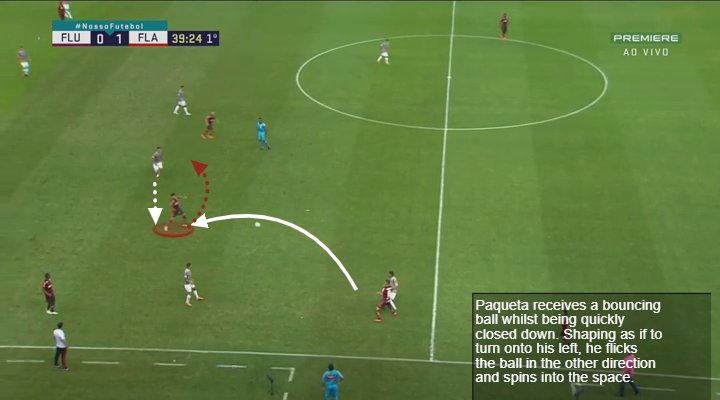 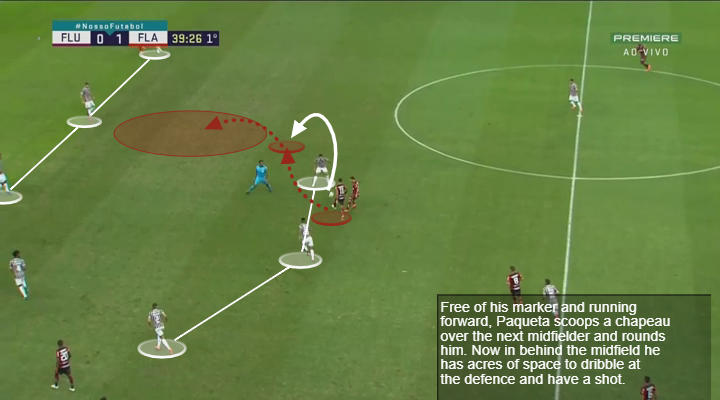 He is also more than happy to slow things down, stand his man up, try a stepover or elastico, before using his acceleration to burst past defenders or win a foul. 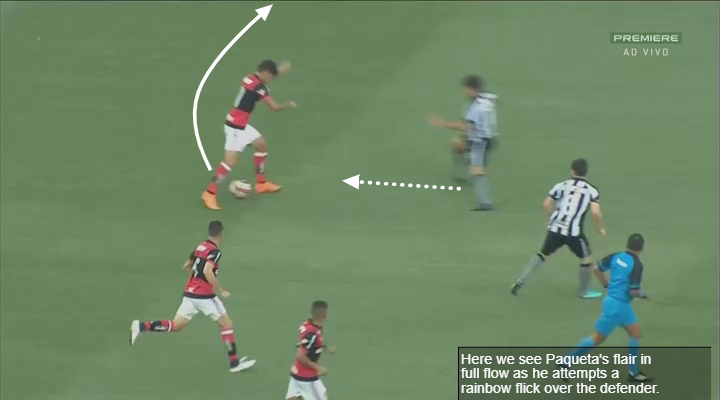 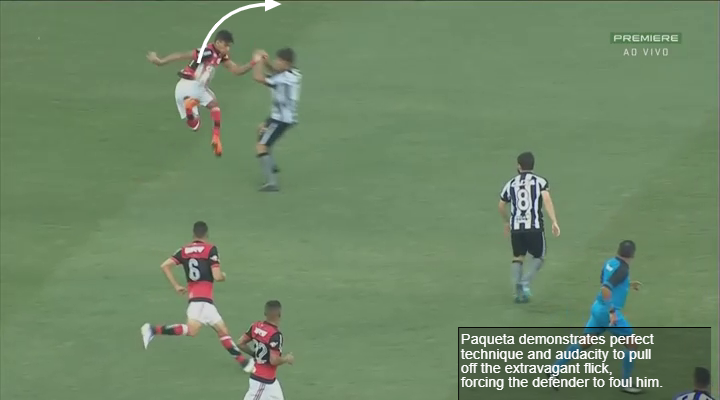 What’s more, Paqueta can use his confidence and dribbling to get himself out of tight situations when pressed or marked closely. His good upper body strength and balance means he can shield the ball well, keep it out of reach and then use his ability to evade danger when opponents commit themselves. 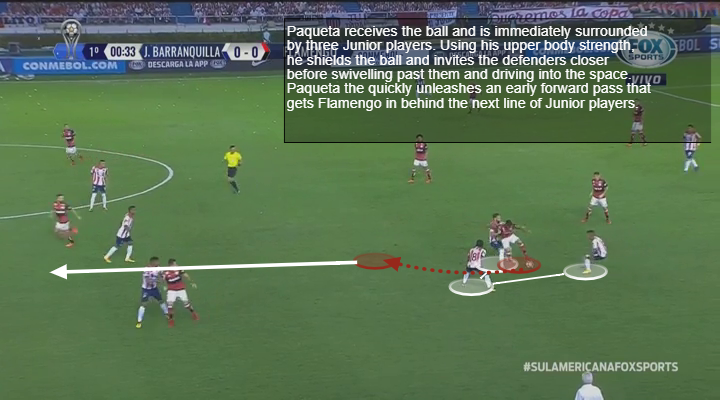 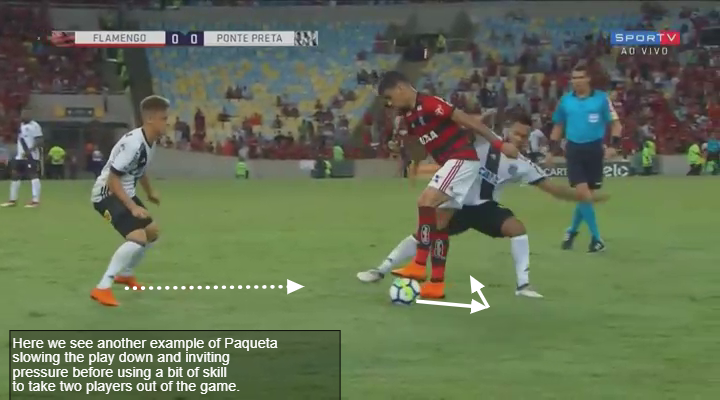 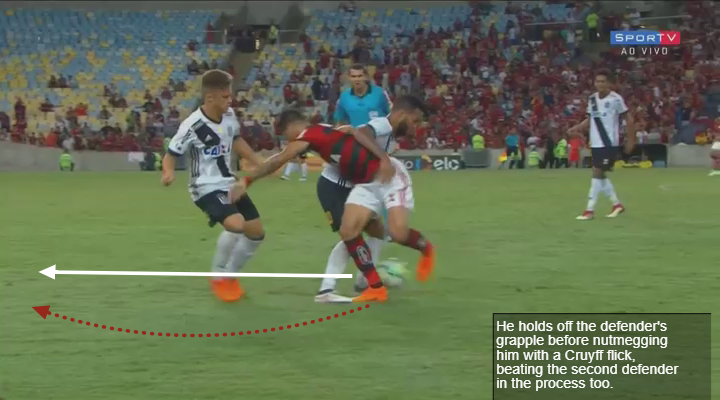 As you would expect from any playmaker, Paquetá is capable of incisive and inventive passing in the final third. When he gets into a pocket of space between defence and midfield his trusty left foot often slips delicate through balls to his teammates and this season his key passes per game has risen to 1.7 on average. 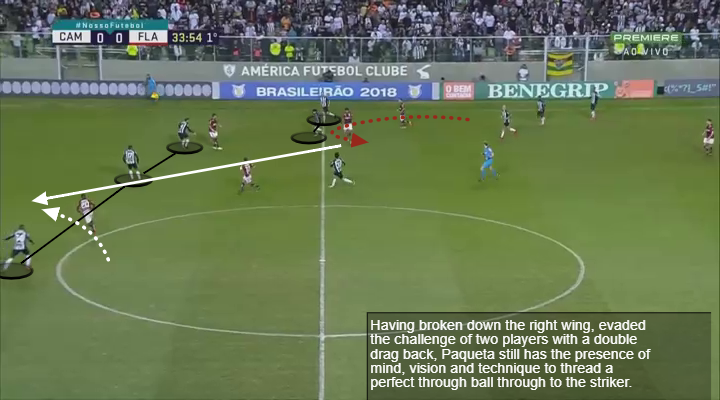 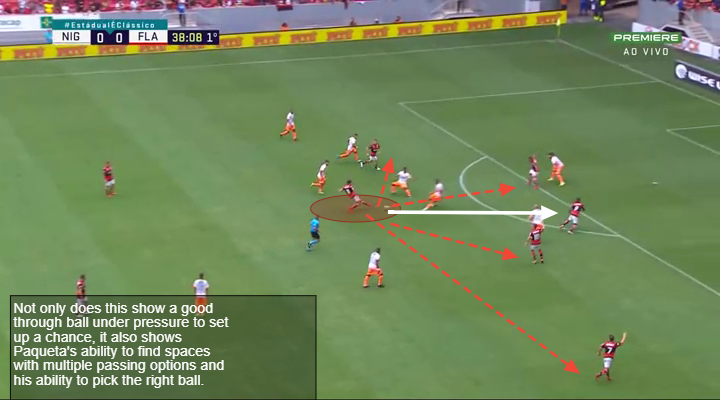 However, as shown by his development into a more versatile midfielder, his passing is also more varied than just someone laying on the final ball. He can play neat short one-twos to create little passing triangles in the centre of the pitch and this improvement in accuracy has seen his average pass percentage increase to 84.3% this season.

What’s more, Paqueta’s range of passing has been better showcased in this deeper role and he is more than capable of spraying mid- and long-range passing to open up the pitch, while he is also versatile enough to be useful on the left wing. 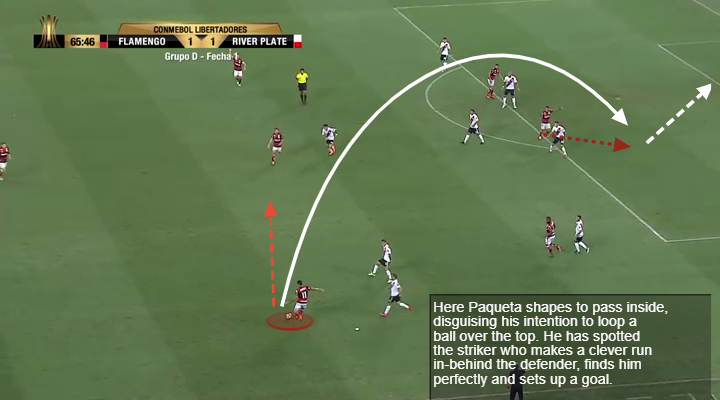 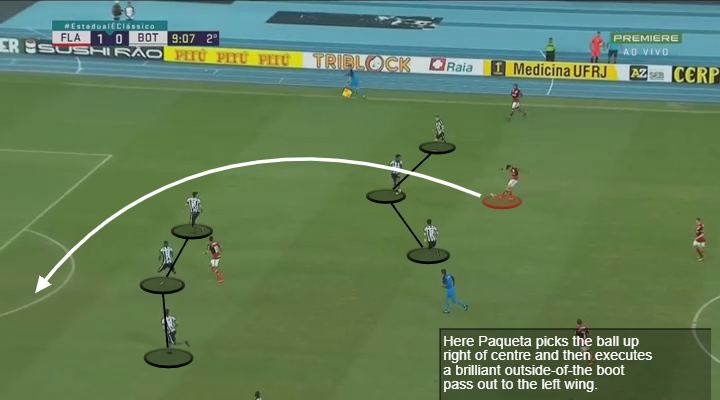 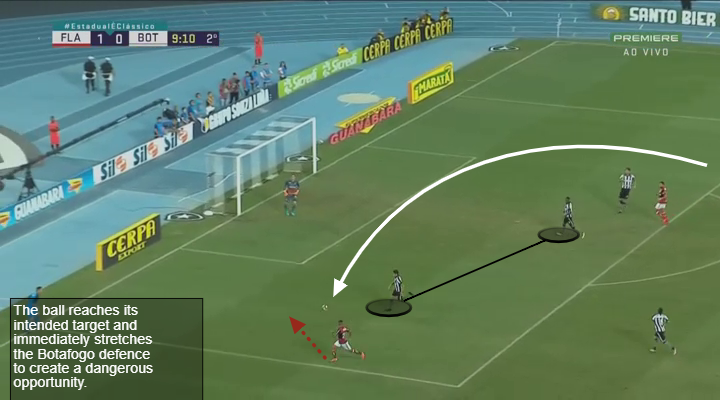 Perhaps the most intriguing aspect of Paquetá’s game is how much he has added to the defensive side of his game, transforming him from an enganche to a modern midfield all-rounder.

Determined, hard-working and able to get stuck in, Paquetá covers plenty of ground and his tackles per game have doubled this season to 3, while his interceptions and clearances have also jumped massively. 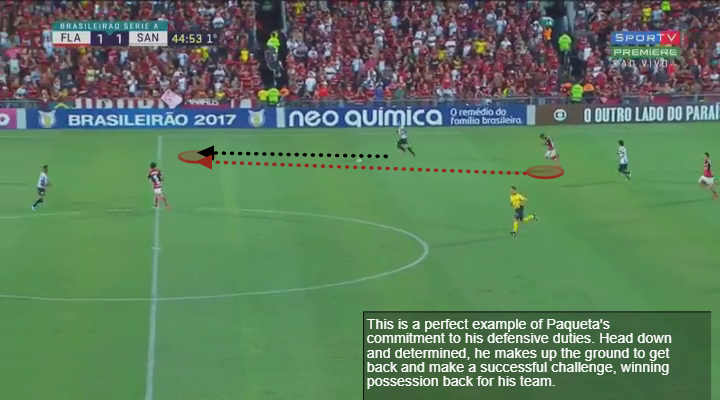 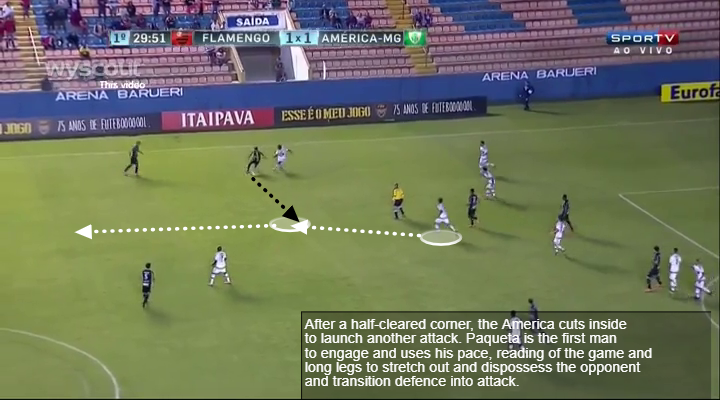 Initially very small for his age when in the youth teams for Flamengo, he has now grown to a decent 1.80m which has allowed him to compete physically and means that he is better in the air than you’d expect too. 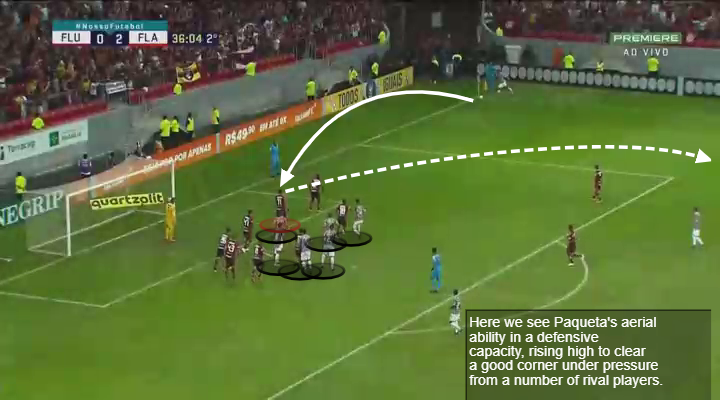 Paquetá has a good left foot on him and possesses a goal threat, as shown by his three goals so far this season. Primarily his best shooting comes from range and he has shown himself to be a good set piece taker too. 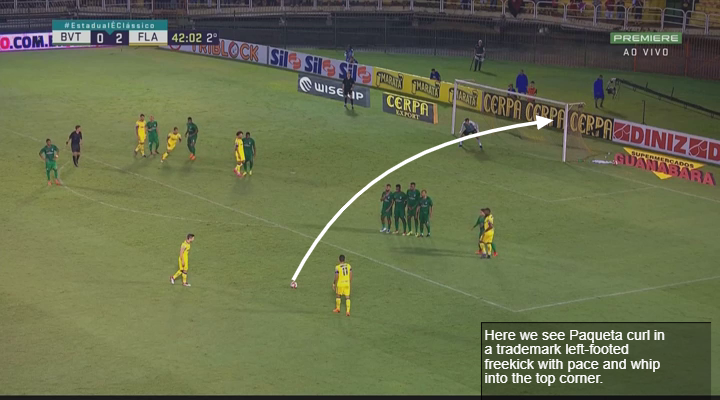 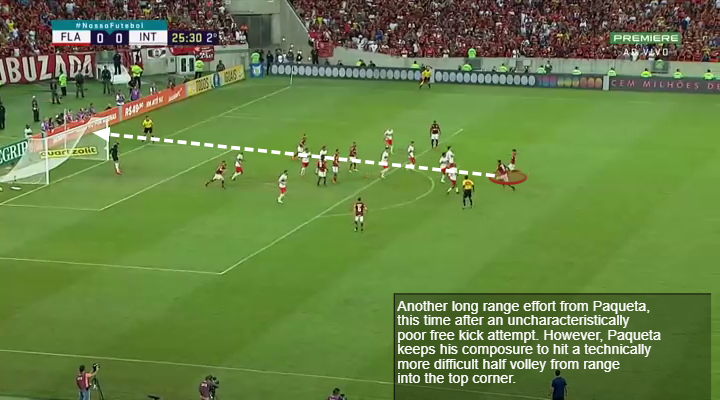 However, Paquetá’s finishing is an area, particularly inside the box, that can still be improved and, while his goal return is decent, if he can add more then he really will be a complete attacking midfielder. 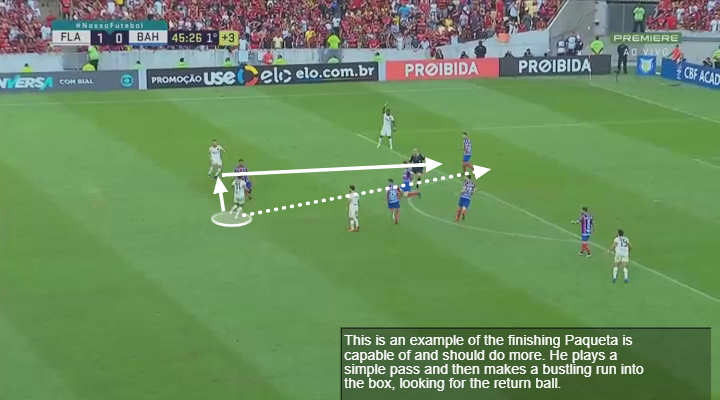 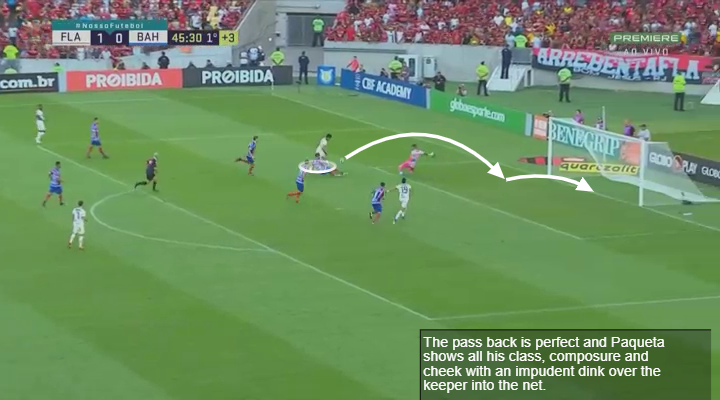 Paquetá, who turns 21 in August, is so hot right now that even his car set on fire as he drove to training recently.

In a Flamengo side packed with young prospects like Jean Lucas, Lincoln and Leo Duarte, Paquetá is already a key player and given their strong start to the year he will be hoping for some silverware before the inevitable move to Europe. With Vinicius gone, the spotlight on Paquetá will be even brighter now.

Yet to make his full senior debut but Tite is clearly a fan and we could see him eased into the Seleção fold in the near future. If his career trajectory continues at its current rate, Paquetá could be peaking perfectly in time for the next World Cup and give the Brazilian midfield even more guile and creativity in the quest for a sixth world crown.