FIFA World Cup 2018: England and their use of set-pieces

It seems a long time ago since Roy Hodgson put Harry Kane on corner duty at the Euros, now England are set-piece kings – with an incredible 75% of their goals (9 out of 12 goals scored) at the World Cup coming from set-piece situations (penalties, free kicks + corners), breaking Portugal’s record (that has stood since 1966) of most set-piece goals in a World Cup. This is not down to luck and instead the rewards of a focused effort by the entire team and coaching staff – so what are the key components behind England’s set-piece success?

Research is a highly underrated aspect of football – managers, analysts, coaches and players all need to be constantly learning and looking at trends in football to gain as much knowledge as possible, whilst possibly identifying potential trends that they could potentially exploit to give the team an edge. Gareth Southgate identified set-pieces as a potential area in which England could gain this edge saying

“On set plays, we’re a real threat – we’ve identified that as a key area in tournaments and a key area we felt we could improve on.”

Southgate took a trip to America in February, where he went to Minnesota to watch and study both an American Football and a Basketball game over 2 days to study details that he could relate back to football.

American Football is renowned for the “plays” that happen during the game, essentially a series of rehearsed and pre-planned moves where players make designated runs and actions. With a bit of organisation, these well planned and rehearsed plays are certainly possible from set-pieces in football, I even have my own “play-book” of every set-piece routine I’ve seen and liked with each players role detailed and drawn out much like American Football coaches would have. I’d be willing to wager that Southgate and his team also have a playbook of sorts.

Basketball also has plays, but it was the more technical aspects of basketball that Southgate was interested in that he could use to help enhance England’s set-piece threat – creating space in tight situations, the “pick and roll” (essentially screening or blocking an opposition player to allow a team-mate space to run towards the basket).

Not content with relying on what he saw, Southgate also apparently quizzed people around him about the tactical aspects on show during the games – impressing those there, particularly some of the board at MLS club Minnesota United, whose minority owner Ben Grossman in an interview with the Wall Street Journal had the following to say about Southgate:

“I know this is going to sound a little silly, but I actually left that night expecting England to do well in the World Cup. You could just tell the way he went about his business that he was going to leave no stone unturned.”

With the above knowledge gained, it was important that Southgate built on that by hiring the right people to further enhance England’s chances.

Allan Russell had a long playing career in football, plying his trade in Scotland (for teams like St Mirren and Hamilton) before swapping Scotland for the lower leagues in England playing for Mansfield and Forest Green Rovers before moving to American and spending a few seasons with Carolina Railhawks and Orange County Blues FC before retiring. After retiring from football Russell became an attacking coach, quickly building a reputation for himself as one of the best-attacking coaches in the game, working with elite forwards such as Wilfried Zaha, Andre Gray, Aleksandar Mitrovic and Euro 2016 winner Eder.

Russell was hired by Southgate in March 2017 and instantly joined the England set-up, working with every age-group alongside coaching both the men’s and women’s England teams. The players seem to respond well to Russell’s sessions, with Harry Kane having the following to say:

“Allan gives us great sessions, he tells us about the positioning of their defenders, the goalkeeper and what weaknesses we should look to exploit.”

Like Southgate, Russell also used his time in America to take inspiration from the NFL saying that “I looked at the NFL and the detail that goes into getting an extra 1% out of these guys is incredible. I took aspects of that into what I am doing now.”

Russell also advised at Chelsea, where Southgate’s number 2, Steve Holland was assistant manager between the years of 2011-2017 – it is worth noting that during Holland’s time at the Blues that Chelsea topped the charts for set-piece goals during their 16/17 title-winning season with 24 goals from set-piece situations – with 13 of those coming from corners alone.

With all the building blocks in place, it was time for all the hard work to be executed on the pitch, the first game against Tunisia saw England net from 2 corners – the first coming after just 10 minutes.

Firstly Jesse Lingard comes across to provide the short option – dragging 2 Tunisian players across and out of the danger zone. Both Sterling and Alli occupy positions on the edge of the 6-yard box, whilst Kane, Stones, Maguire and Henderson all hover on the edge of the area. I don’t understand their reasoning behind it, but Tunisia choose to make the main attacking quartet with just 3 players – instantly putting England on the front foot.

Henderson makes an attacking run to Sterling’s marker (presumably thinking that Sterling’s marker would be weak aerially, hopefully creating a height mismatch that Henderson could exploit), this run – which started before any other England player moves also drags 2 of the 3 Tunisian man-markers out to chase Henderson, leaving Kane, Stones and Maguire with just 1 man-marker to contend with.

Both Stones and Maguire attack the same spot, with Stones managing to get a powerful header on target which is saved well by the Tunisian goalkeeper – for Harry Kane who has made a run towards the back post completely unchallenged to tap in from close range.

Whilst the Tunisian defending was undoubtedly poor, this corner has many components which show that a lot of importance has been placed upon them such as decoy runs (doubling as coverage of important areas in case of a bad delivery), follow up runs and creating space for your main aerial threats to hopefully get a chance away.

We see a near identical routine for England’s winner, but Sterling and Alli on the edge of the 6-yard area have been replaced by Loftus-Cheek and Rashford.

There is one notable difference though – how close the trio of Henderson, Stones and Maguire are together (even putting their arms around each other – which was dubbed “the love train”). This instantly makes man-marking ridiculously hard as not only does the defender have no idea where the attacker will be making the run, but also the close proximity to a large amount of players makes it hard to effectively track the runner due to a mix of confusion and bodies in the way (acting as a sort of screen).

This, combined with Henderson’s forward run and Kane’s drifting run to the back-post leaves an aerial 2 vs 2 situation with Stones + Maguire up against both their man-markers, Maguire wins the aerial as you’d expect, flicking the ball towards the back-post where Kane has lost his marker – leaving him with a free header from a few yards out.

A fantastically worked routine. On the edge of the box, Young is blocking Stones’ marker, delaying him from following Stones by just a second – allowing Stones to attack the ball unmarked.

Maguire, Henderson, Kane and Loftus-Cheek all gather together in the box and split in different directions “parting the sea” by creating a large amount of room for Stones to attack Trippier’s brilliant delivery. An obviously well researched and rehearsed routine.

It’s not just corners that England had obviously been working on, with an impressive free-kick routine also used – I’m not sure why this was used when 3-0 up against Panama though as it certainly could have been useful later on in the competition. Henderson’s run to receive the ball fools his marker who thinks he’ll be making a run into the box, buying Henderson a crucial second or 2 to run to the ball unopposed – which is all he needs to hit the first time pass towards the back post.

Both Kane and Maguire are attacking this area and it’s Kane that manages to get the flick on.

Taken by surprise by the move, the Panamanian defence stand and watch whilst the remaining England players complete the move, with Sterling, Lingard and Stones all following the ball into the box, Sterling really should have scored his attempt but again the strategy of having multiple players following in from different angles pays off.

Another interesting routine, again Henderson makes a run to the near post, giving the double benefit of creating space for the other attackers, as well as covering the area in case of a poor delivery.

Stones makes a run away from the ball, whilst Kane and Alli make runs towards the back post both of which creates space in the area for the main target.

The most interesting aspect of this corner is Sterling – it makes sense from a Swedish perspective to man-mark Sterling with one of the smallest/aerially weakest players due to Sterling being so small and bad in the air himself. Sterling doesn’t move when the corner is played in, with the other England players movement dragging the bigger Swedish players out of the danger area – isolating Sterling’s man-marker. Maguire then attacks the zone where Sterling is occupying, creating an aerial mismatch which Maguire takes full advantage of to power the header into the net. 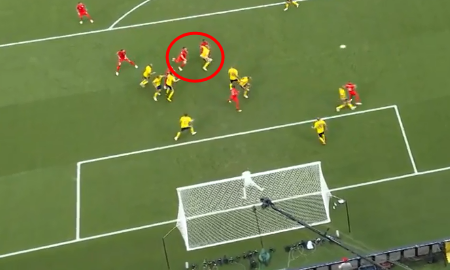 It’ll be interesting to see what direction Southgate and his staff take regarding set-pieces, whether they continue honing them during qualification for the Euros and the World Cup, or whether the work will continue in secret – only utilising them during knockout competitions or more important games. Either way though, England’s success from set-pieces will most likely make a lot of clubs sit up and pay more attention to set-pieces in the very near future.