Many of the questions surrounding Steven Gerrard’s arrival in Glasgow were around the fact he was taking on such a big job for his first in management.

Elements of risk were mentioned in abundance, both for Gerrard and for Rangers. His first two games in charge were Europa League qualifiers, given the Ibrox side’s third-placed finish last season in the Scottish Premiership. An opening at home to Macedonian side FK Shkupi was to be the first test of Gerrard’s credentials as a manager.

The home leg at Ibrox ended in a 2-0 victory for Rangers, while the second leg finished goalless in Macedonia a week later.

Here I take a look at the positives and areas to work on for the former Liverpool captain.

Rangers set up in a 4-3-3 base structure with a big emphasis on occupying the central area. Combination play looks to be a big part of the Gerrard style as James Tavernier, Josh Windass who is occupying the right sided eight area in starting position, and Daniel Candeias are involved in combining together down the right side often during the game.
Scott Arfield moved forward into advanced areas to link up the with the forward line.
Indeed these movements from Arfield offered the opportunity for quick sharp passes to break through the opposition defence.

Rangers imposed a high press in there 4-1-2-3 structure, albeit against Shkupi, but if this is the way forward for Gerrard then the signs are fairly promising for the Gers.
This type of pressing structure will see them win the ball back fairly comfortably from most opponents. Shkupi taking goal kicks allowed Rangers to push up and Morelos along with either Murphy on the left side or Candeias on the right side position themselves almost on the opposition penalty area.

Compact in midfield without the ball, this allows Rangers to block the central area but without conceding the wide areas. Scott Arfield on the left side of the midfield three, and either Windass or Candeias press outwards towards the opposition.

This is an area Rangers struggled last season, particularly in the latter part of the season in bigger games such as the Scottish Cup semi final defeat to Celtic, clearly an area Gerrard feels needs addressing.

Early stages of process for Gerrard

However early in the season early signs are promising, the general feeling was though that Shkupi wouldn’t cause too many problems for the Ibrox men. The Macedonian side had set up in a 4-4-2 with their two front men fairly disconnected from the midfield, giving Rangers space to enjoy a no pressure build up.

This allowed Rangers to utilise Ross McCrorie in an easily accessible position via the two full backs. Rangers had Shkupi pinned back fairly well in the game but failed to capitalise on the advantages they had in the game, a large number of crosses into the box were either dealt with or missed by blue jerseys.

Clearly, the Shkupi defensive set up was exploitable particularly in the right half-space with the Tavernier/Windass/Candeias pattern enjoying a lot of success. Candeias at times though drifted too wide and away from Arfield or Windass which reduced the option for quick combinations.

One area Gerrard may look to improve is bringing the ball out from the back and deeper build-up play, in Connor Goldson and Nikola Katic he is not blessed with natural ball players.

However in this game with Ross McCrorie occupying the Shkupi forward line the opportunities to move forward with the ball and commit an opposition player to open up spaces in the game were there and were rarely if ever used by the two central defenders.
This could allow Rangers to move into dangerous areas if the right pass forward is chosen by a defender, allowing for quick passing combinations which will lead to good penetration opportunities.

Where things will be more testing for Gerrard and his squad is when teams will employ a higher press against them, which is likely particularly away from home in domestic competition. This will be an area for the coaching staff to pinpoint and find a way to play through and break an opponents press.

With twenty-one attempts and only seven on target, Gerrard will be disappointed Rangers never made their dominance count in more emphatic fashion.

Areas to work on

In both games at home and in Skopje, Rangers were fairly clear with their man orientated pressing scheme. The wide men split the two fullbacks and central defenders. In the central zone, Arfield and Candeias dealt with the midfield players for Shkupi, though Candeias drifted to gain access to the left fullback.

The sum of Morelos pressing was to block passes to the near central midfielder, his best work was done when dropping into the last line to create overloads, and then working to reach the box to get on the end of potential crosses or combinations.

A clear high pressing approach from Rangers is on its way to becoming a major part of how they play under Gerrard, however, when this approach was in full swing at times it left clear gaps in the midfield area where sometimes young McCrorie was left with spaces either side of him. This was clearly not exploited by the Macedonian side but against better and more aware sides this is an area which will require more attention.

At times last season Rangers were caught with far too many players in the opposition half, allowing for easy counter-attacking opportunities. This was an area where many of the goals conceded and ultimately poor home defeats last season stemmed from.

Another area which I touched on earlier is the need to improve against opponents pressing, Shkupi employed at times an aggressive press in the second leg.

Once teething issues like these are worked on and rectified by Gerrard, we could well see a ‘full throttle’ Rangers team like the one we have been led to believe is on the way by the new manager himself. This will require a lot of work tactically and a better understanding and in-game management of certain situations.

Tactical fluency, cohesion and fitness will all improve in the coming weeks. Of course, we can only judge the two games against Shkupi and a 6-0 friendly win against Bury but the signs are promising for the Gers.

The additions of Lassana Coulibaly and Umar Sadiq will add more quality to the Rangers squad, particularly Sadiq as the chance conversation rate for Morelos in both games has been extremely poor and will be a clear cause for concern for Steven Gerrard.

Aspiring analyst, cover a variety of leagues, matches and coaches across Europe. All views my own. 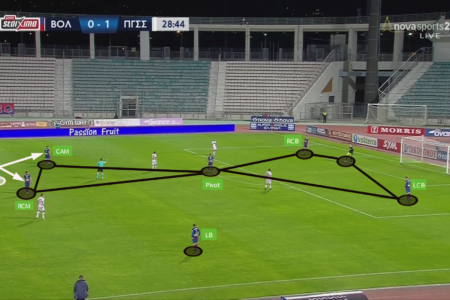 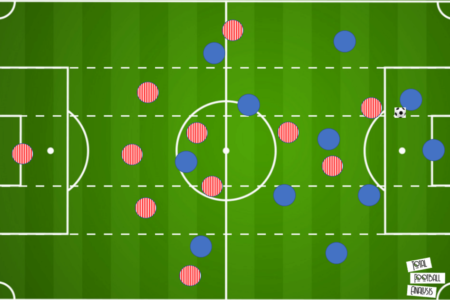 Michael Duff’s Cheltenham Town were ever so close to winning the play-offs last season. After winning the first leg away […]

How Bartosz Grzelak turned things around at AIK 2020 – tactical analysis

AIK were the Swedish champion in 2018, almost featuring in the UEFA competitions. However, things have gone completely the other […]