The Scottish Premiership has been quite one-sided over the last few years, and it looks like it will be the case this time around as well. Most people who read this statement, and are generally unaware about Scottish football, would assume that Celtic are on their way to their 10th consecutive league title. However, that is not the case, and it is their eternal Glasgow rivals, Rangers, who are sitting pretty at the top, with a 19-point lead over Celtic at the time of writing. The Gers have had an unbeaten league campaign so far, outscoring the rest of the division with 68 goals from 28 matches, but what has been even more impressive is the defensive improvement that Steven Gerrard has overseen this season. Gerrard took over the Ibrox club at the start of the 2018/19 season and has overseen a period of steady improvement. The Gers finished in 2nd place in that season, but were the top scorers in the league with 82 goals, having conceded 27. Last season, Rangers were again in 2nd place when the league was halted and ultimately suspended due to the pandemic, where they had conceded 19 goals in 29 games and scored 67, but were 13 points off Celtic. In that respect, Rangers are certainly much better off, having seen a 32-point swing in their favour, and are performing much better both offensively as well as defensively.

Rangers have conceded just eight goals in the league, which has been the bedrock of their title challenge, and in this tactical analysis piece, we will look at their defensive system and how it has been so effective this season.

Before looking at the specific tactical principles and structures employed by Gerrard, it is important to quantify the extent of Rangers’ defensive performance to get a sense of just how well they have been doing this season. While they have conceded eight goals in the league, their expected goals against (xGA) tally is at 17.5, according to Wyscout, which signifies that they have been outperforming on a defensive basis by quite an extent during this campaign. They are also topping the league for a number of other metrics – shots conceded (5.1/90), challenge intensity (7.9) and PPDA (7.79), for example. The numbers suggest that Rangers have been a fairly active and intense side when out of possession, looking to press and harry their opponents. And while they are outperforming their xGA by a significant amount, the fact that we are well past the halfway mark of the season suggests that this is down to good defending and goalkeeping, rather than a quirk which can be expected to revert to the mean as the season progresses.

One of the most impressive aspects of Rangers’ defensive tactics under Gerrard has been their pressing. We have already seen through the PPDA and challenge intensity numbers that Rangers do like to put pressure on their opponents when they lose possession, but it is the intelligence of that pressing effort that stands out. The main aim of Rangers’ press is to force the ball away from central areas and out wide. This has two benefits – it takes the ball away from dangerous areas and reduces the opposition’s passing options, and makes it easier for Rangers to press intensely near the touchline since that forms a natural barrier which reduces the playing area.

The following images are an excellent example of this press, from a game against Aberdeen earlier this season. 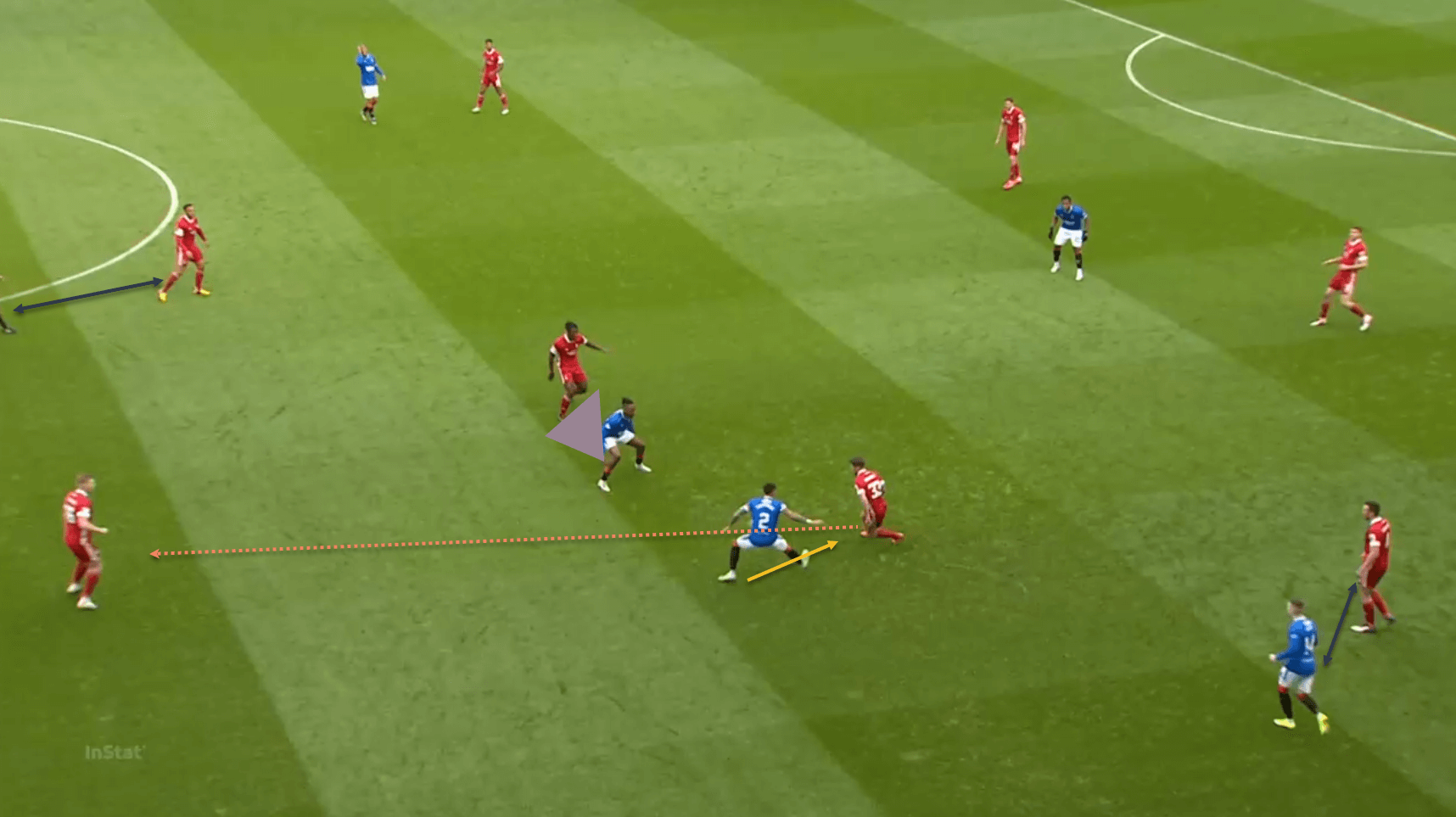 Here, Rangers are pressing high up the pitch, in Aberdeen’s half. Captain James Tavernier has moved high to press the Aberdeen player on the ball, while Joe Aribo is blocking the pass to the central option nearby, leaving him with no choice but to play the ball forward to his teammate who is dropping to receive. 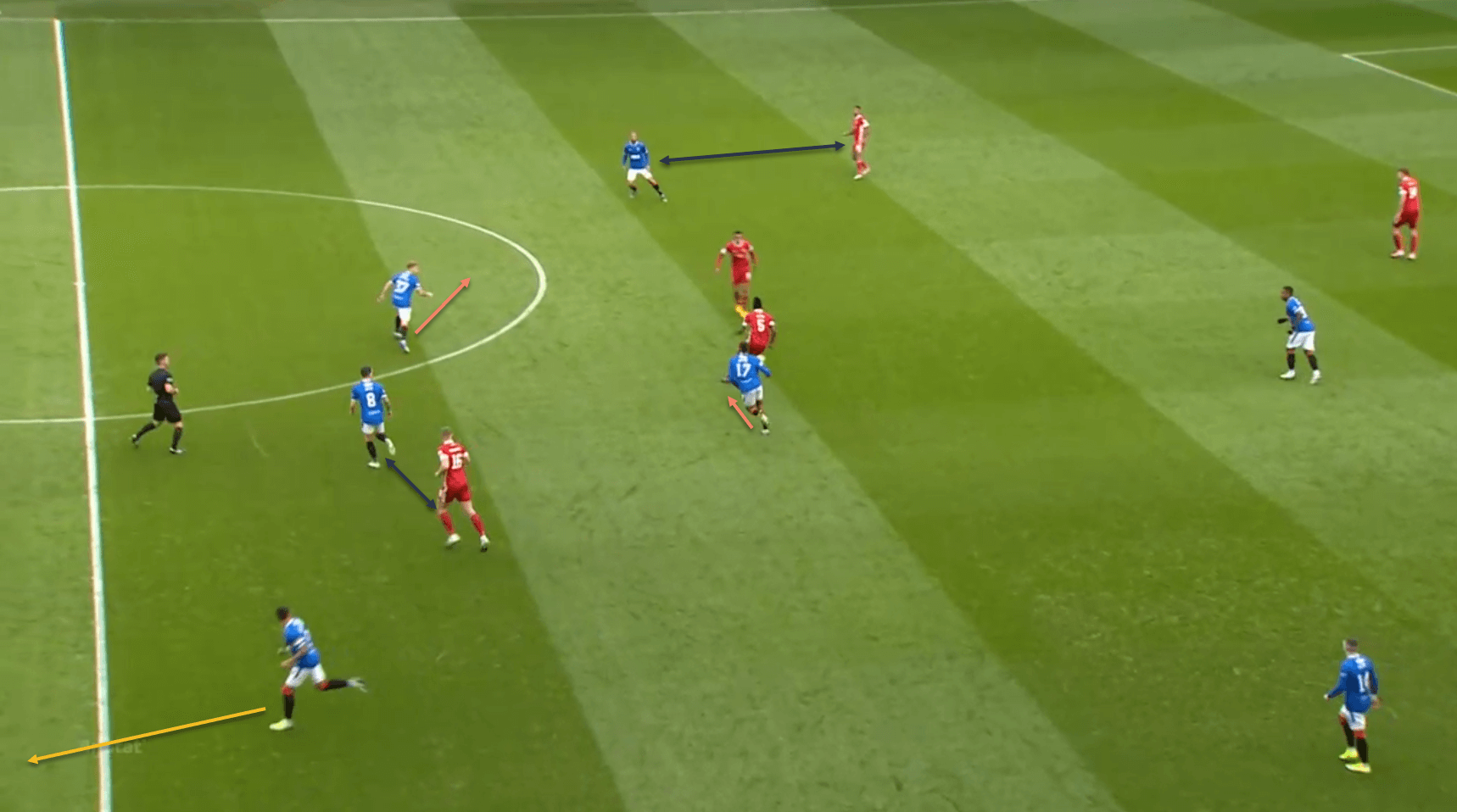 The ball is moved back to the Aberdeen central midfielders, with Tavernier now retreating to keep up with the advancing player. Scott Arfield and Ryan Jack stay deeper to cut out central passing lanes, while Aribo continues to pursue his opponent, while on the flank, Kemar Roofe is staying close enough to the Aberdeen player to apply pressure if needed. 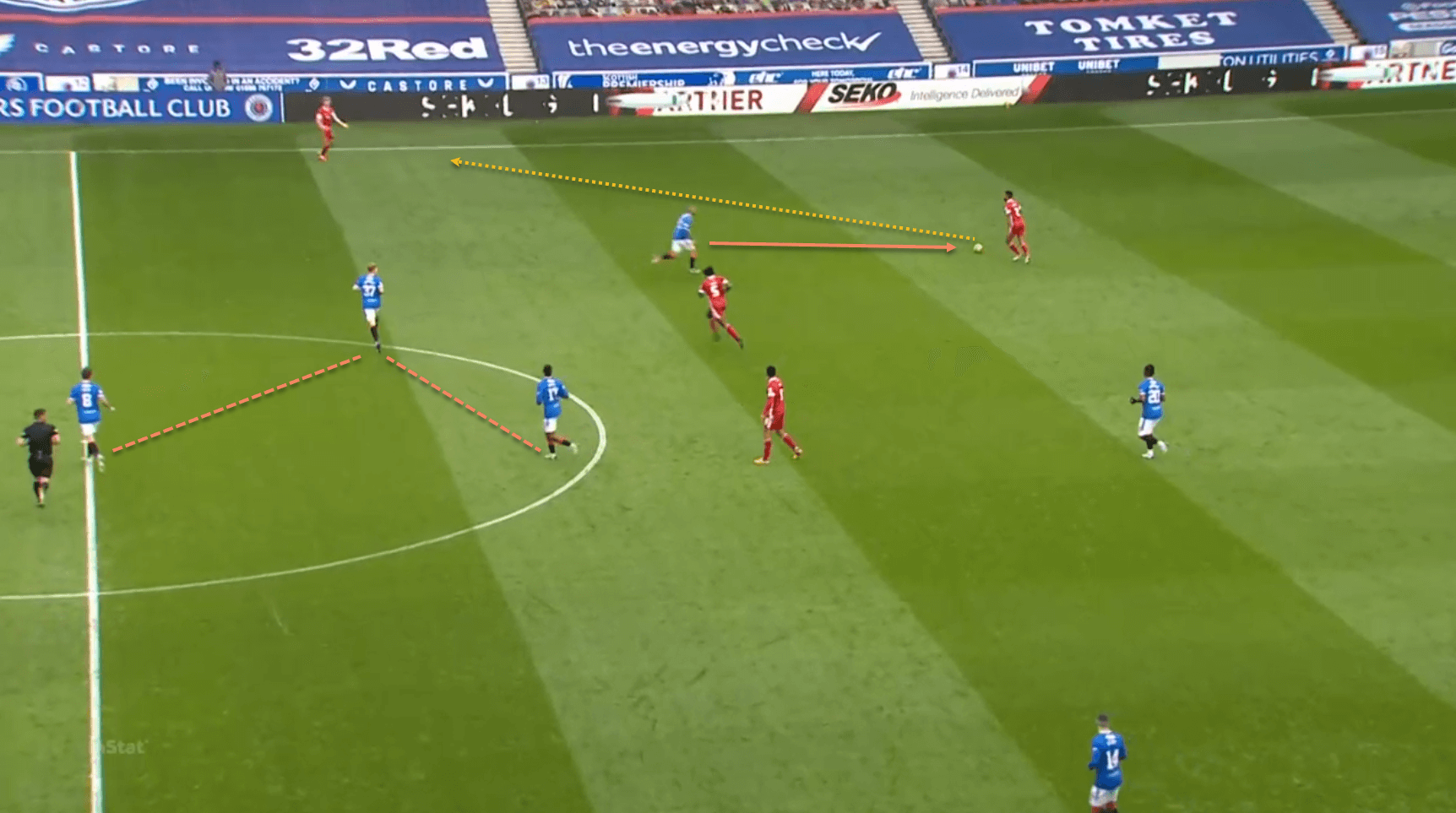 Now, when the ball is with the Aberdeen right-sided player, Roofe looks to press. The Rangers midfielders are staying central to cut out passing options, which leaves only the pass out wide to the wing-back for the player on the ball. 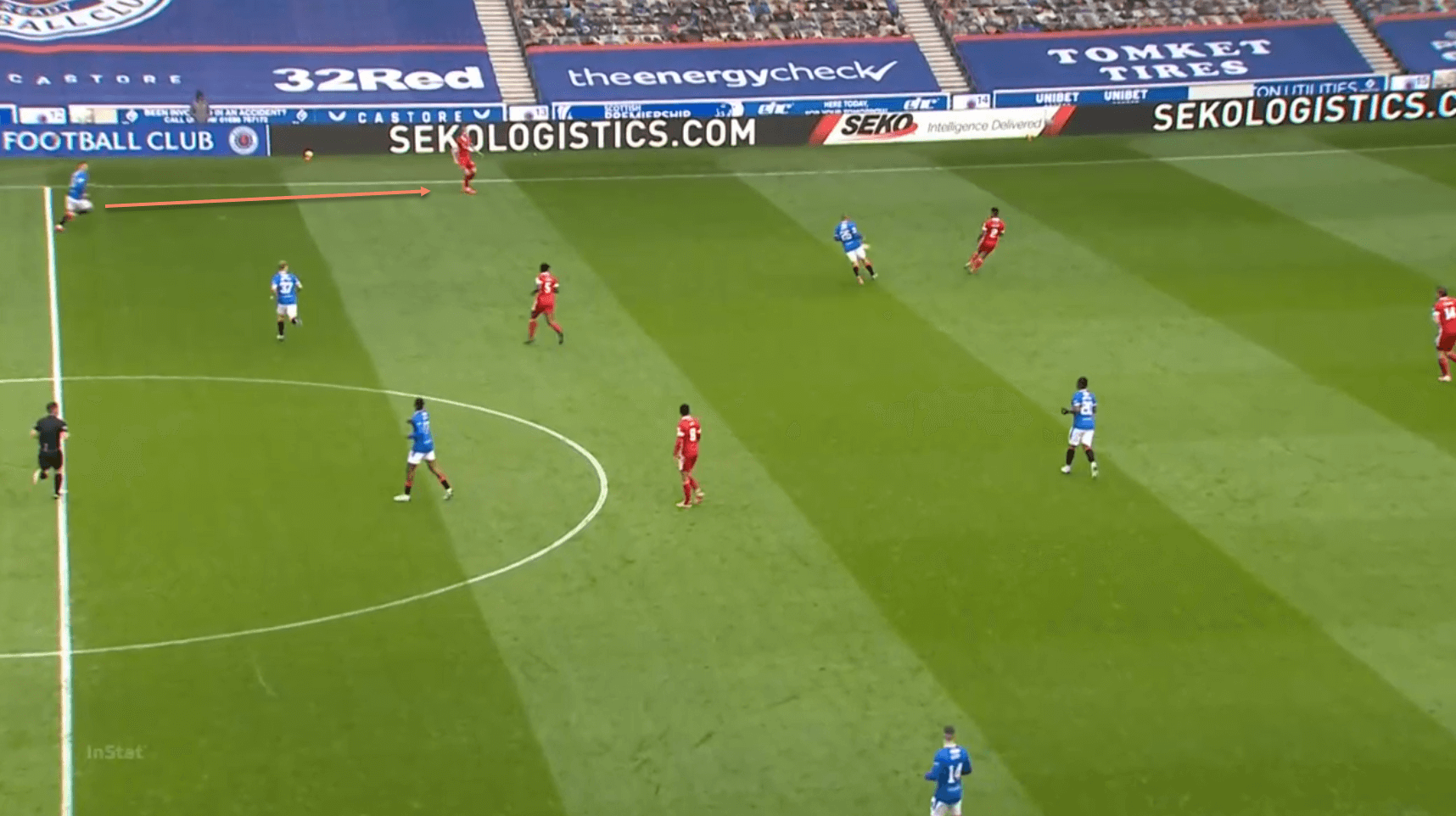 Again, the moment that pass is made, Borna Barisic, the Rangers left-back, rushes upfield to press. 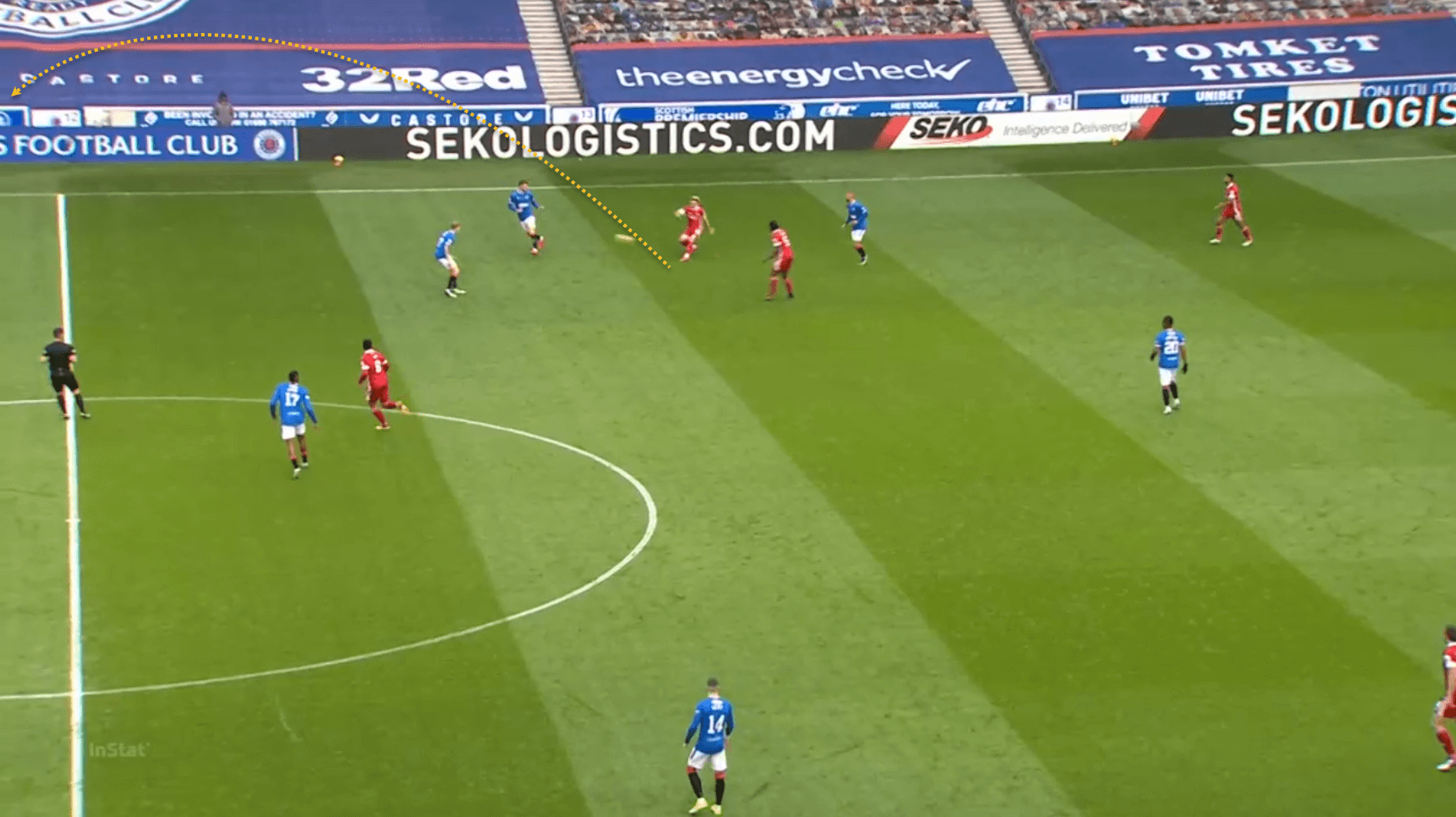 Rangers’ press, and their closing down of space centrally, means that the wing-back has no option but to pass long, where his striker is caught offside and Rangers are able to regain possession.

The Gers have been able to keep teams away from dangerous areas in this manner, constantly forcing the ball wide before pressing with multiple players to either win the ball back high up the pitch or force a long ball in behind where Rangers can pick up possession through offsides or by winning the ball in the air.

The next set of images will show another co-ordinated press, this time against Celtic, which resulted in a turnover of possession in the middle third of the pitch, sparking a Rangers counter-attack. 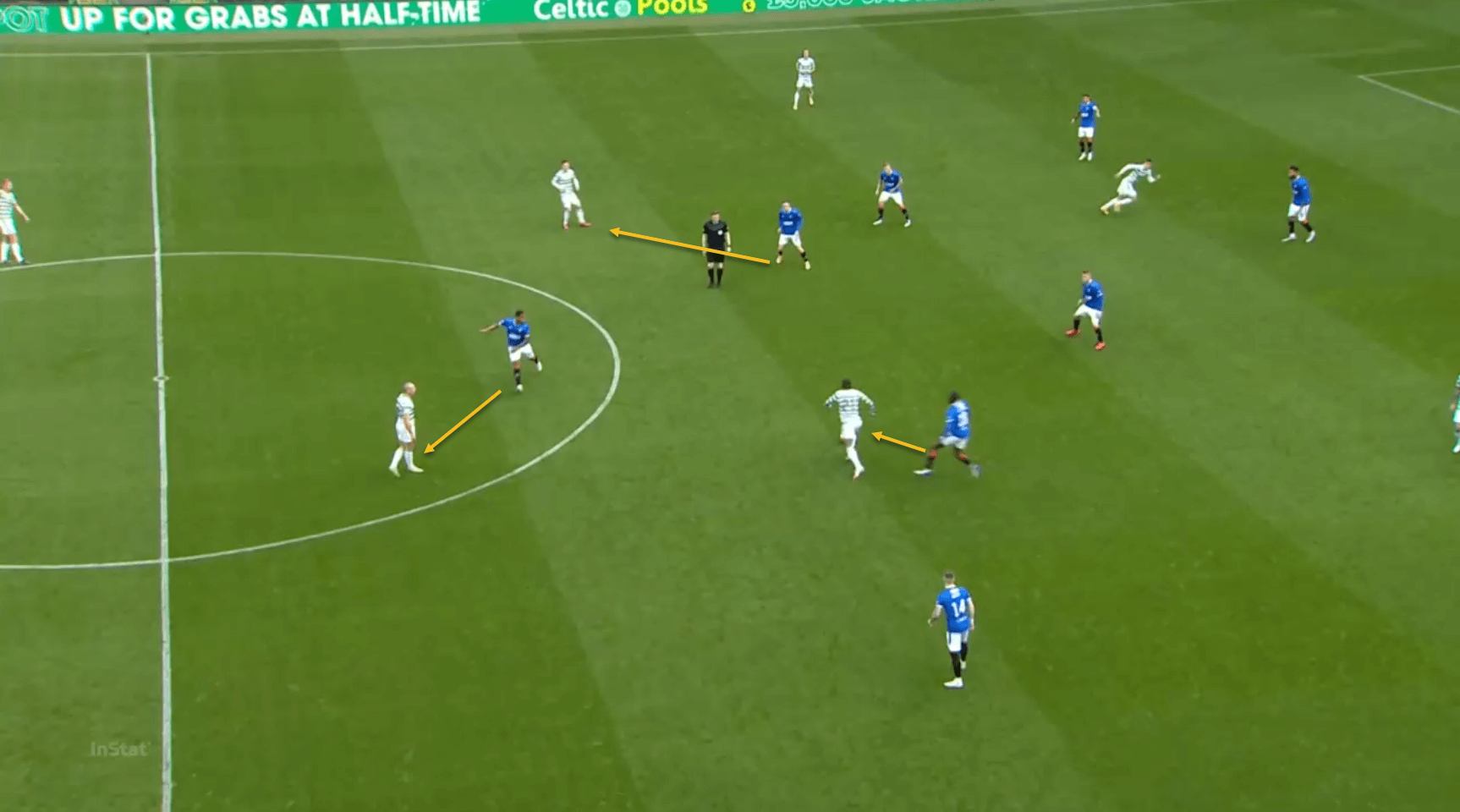 Here, Rangers are pressing the Celtic players in the middle third of the pitch. Alfredo Morelos is on hand to ensure that Olivier Ntcham does not have an easy pass to Scott Brown available, with Glen Kamara closing him down and Scott Arfield ready to move out to press Callum McGregor if the pass is made there. 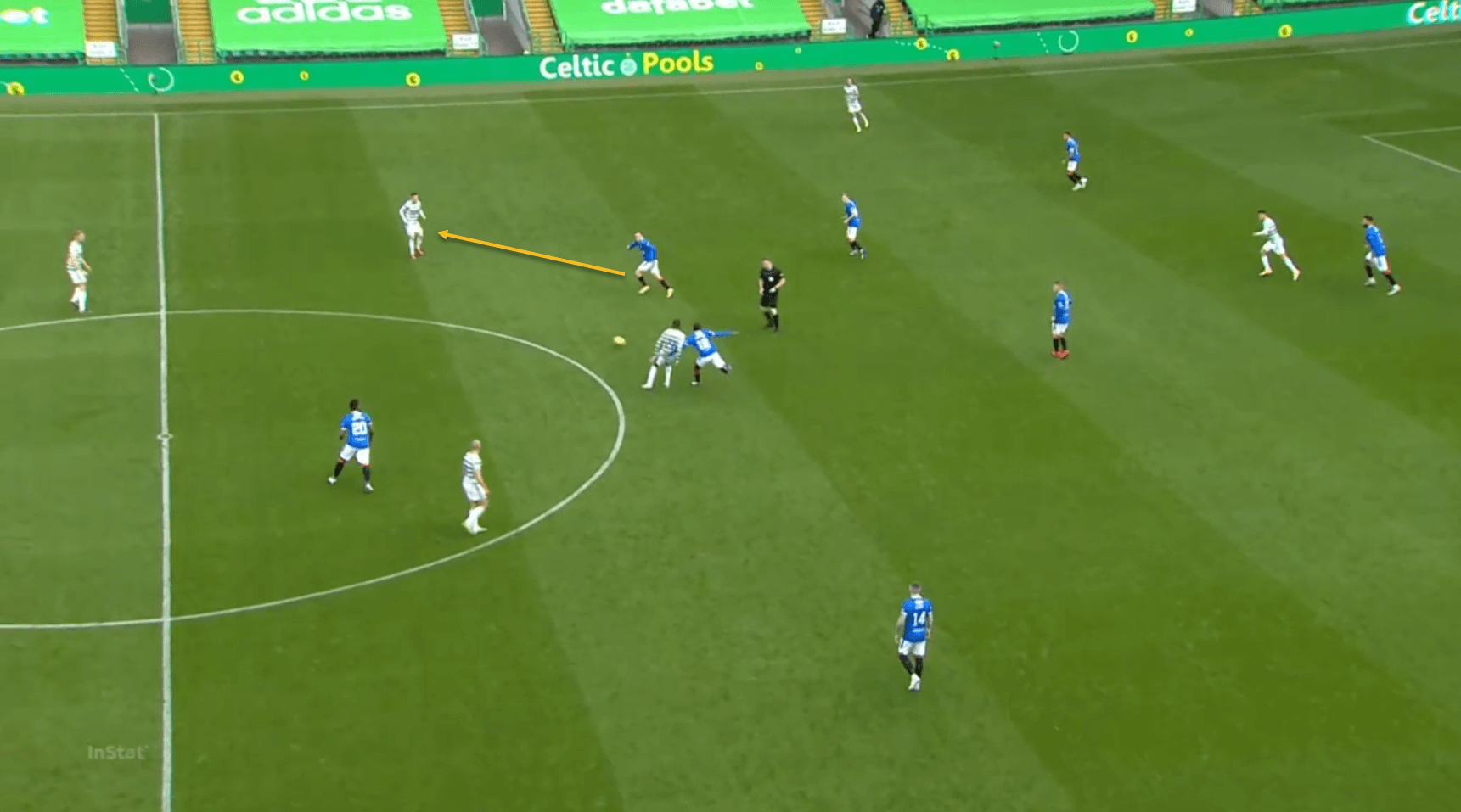 We see this happen as the ball finds its way to McGregor, with Arfield’s pressure then forcing him to go backwards. 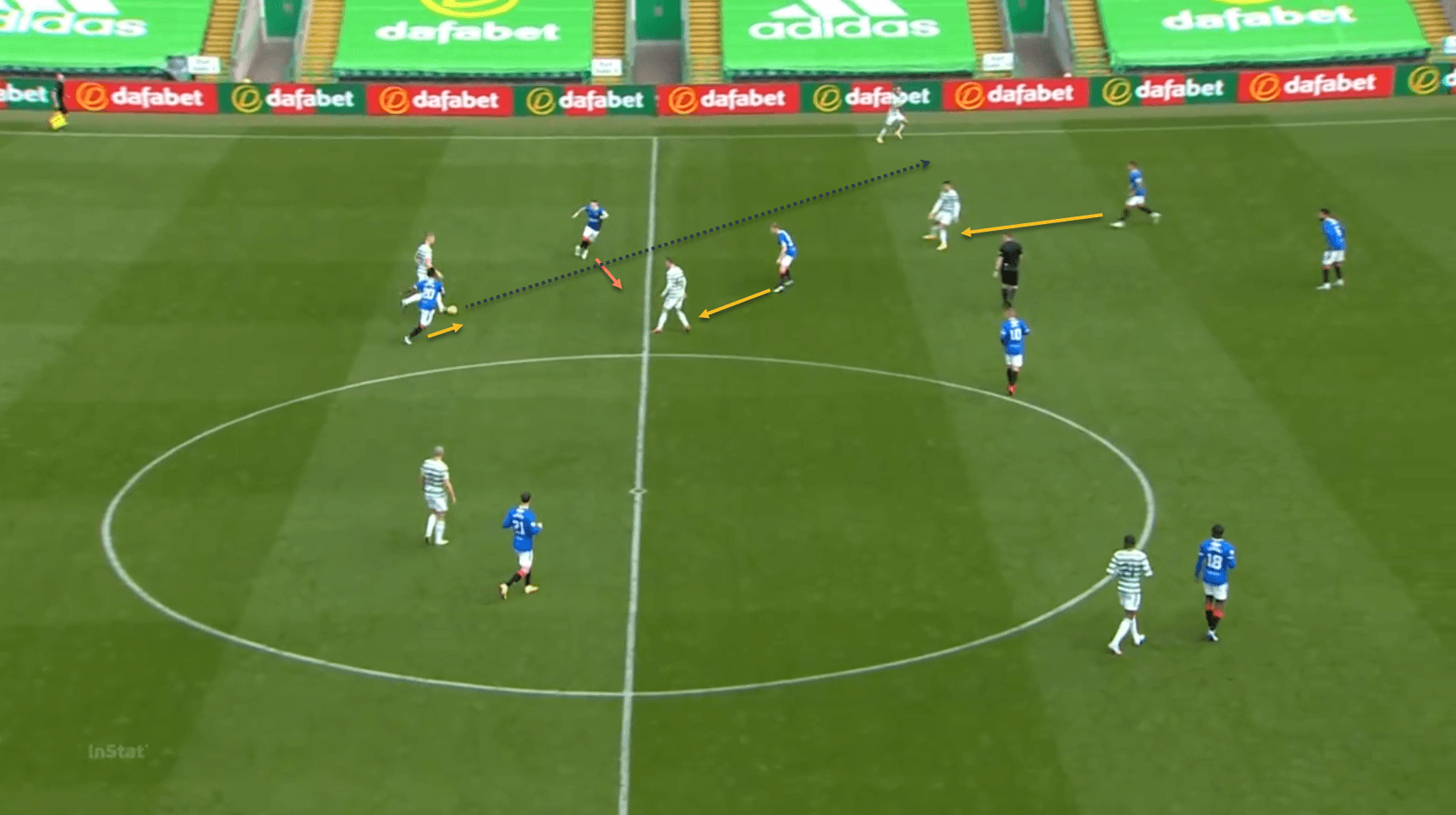 The ball goes all the way back to the centre-back, whose only viable passing option is towards Diego Laxalt on the flank, due to Rangers’ closing down all of his central passing options. This pass is then read by Ryan Kent (orange arrow), who is able to intercept and begin a counter-attack for the Gers.

Thus, we have seen how Gerrard has been able to put a well-oiled pressing machine in place at Ibrox, which has been forcing teams backwards and sideways and therefore away from potentially dangerous central areas. This energetic and intelligent press has been one of the biggest reasons for Rangers’ defensive dominance this season.

Compact and narrow when needed

That is not to say that opponents have not been able to have any penetration at all against Rangers this season. However, when they have managed to do so, Rangers have been able to spring into a tight, compact and narrow shape, which has usually denied access to central spaces around their penalty area and has once again forced opponents out wide. 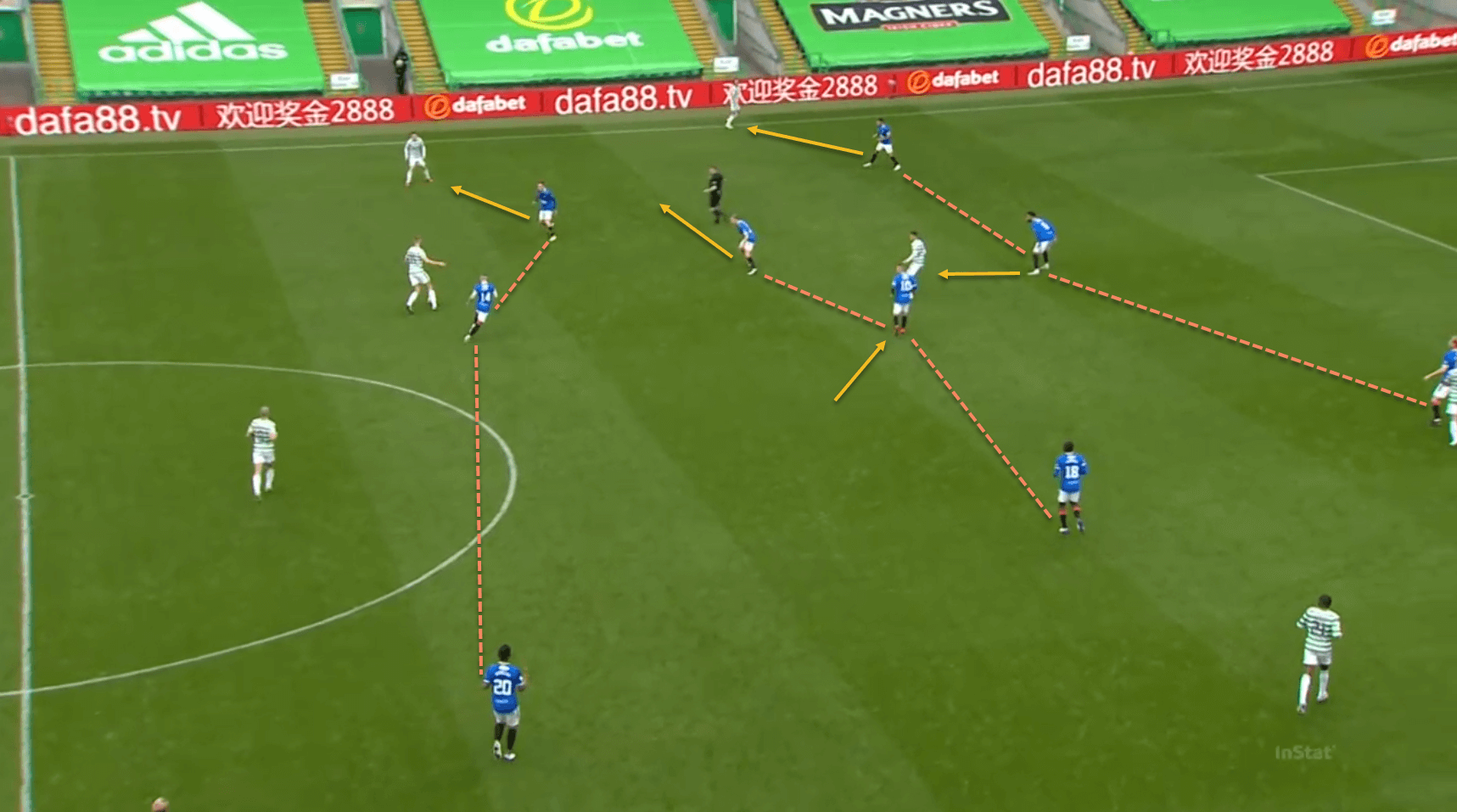 Here, Celtic have a sustained spell of possession in the middle third, but Rangers have been able to block access to central space. Note how Steven Davis is staying close to Mohamed Elyounoussi, available to help out Conor Goldson if needed, while the ball-side central midfielder and winger, namely Scott Arfield and Brandon Barker, are both ready to move out to press McGregor if Kristoffer Ajer plays the pass out to him. Tavernier is also in position to engage Laxalt, and thus Rangers are able to defend the width of the penalty area effectively, while also being in possession to press out wide immediately when needed. 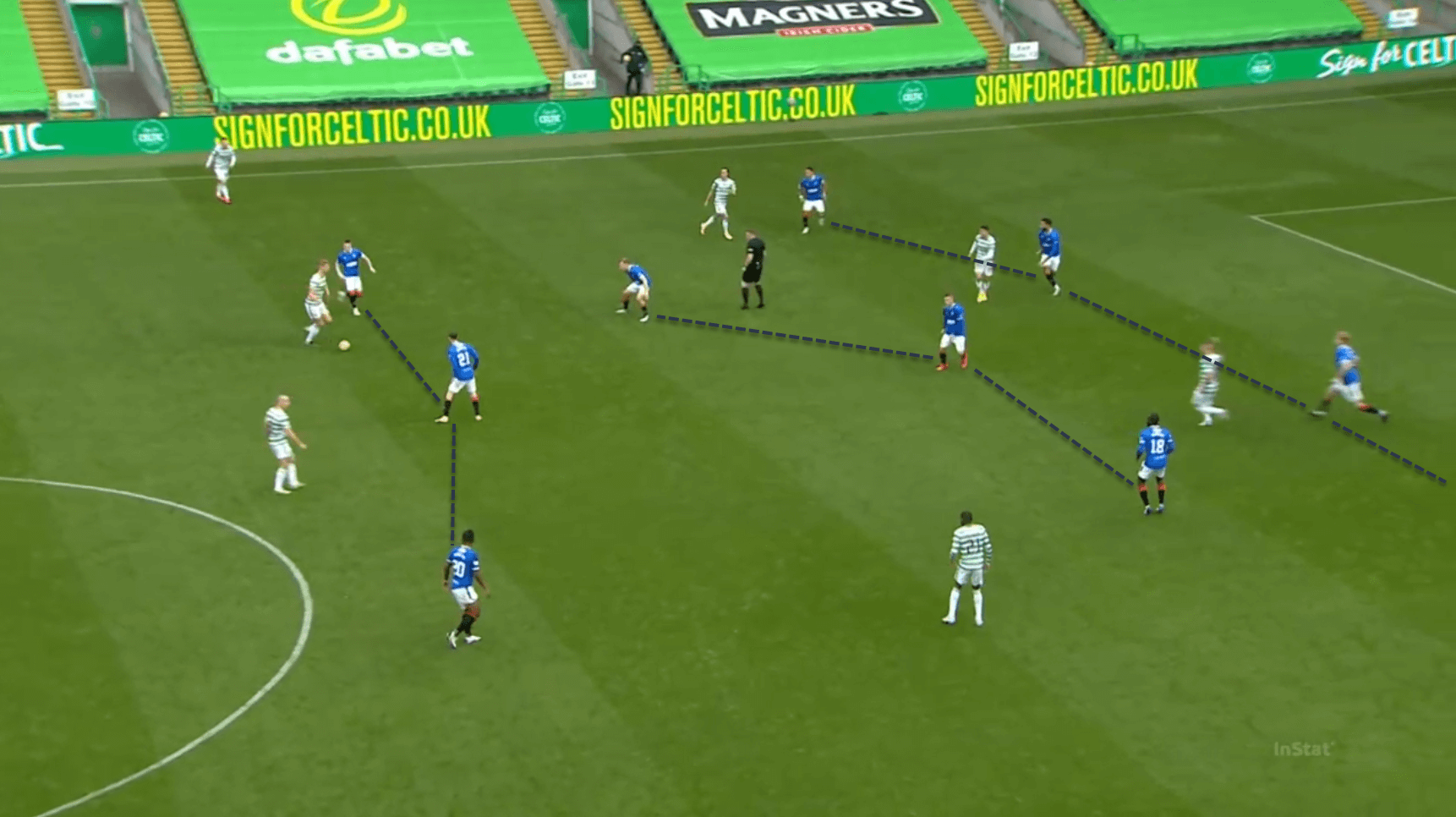 Another example of Rangers’ excellent structure – the midfield and defensive lines are extremely compact, while the front three is in position to press. Again, we can see Arfield ready to spring out wide on the outside of the midfield three, while Kent is the right-winger at this time, and so is pressing Ajer.

One notable feature of this side of Rangers’ play has been the willingness of the central midfielders to cover for the full-backs and wingers. Gerrard has almost exclusively played a 4-3-3 this season, and so the outside central midfielders have often had to go out to the flanks to cover space or track opponents when the full-back is higher up the pitch to engage the opposition winger. There have also been occasions where the winger has dropped into a central position to track an opponent, so the central midfielder has had to go out wide in his place. These positional rotations have become almost seamless by now and have allowed Rangers to maintain their shape while also ensuring that opponents are not able to pick up positions in space. 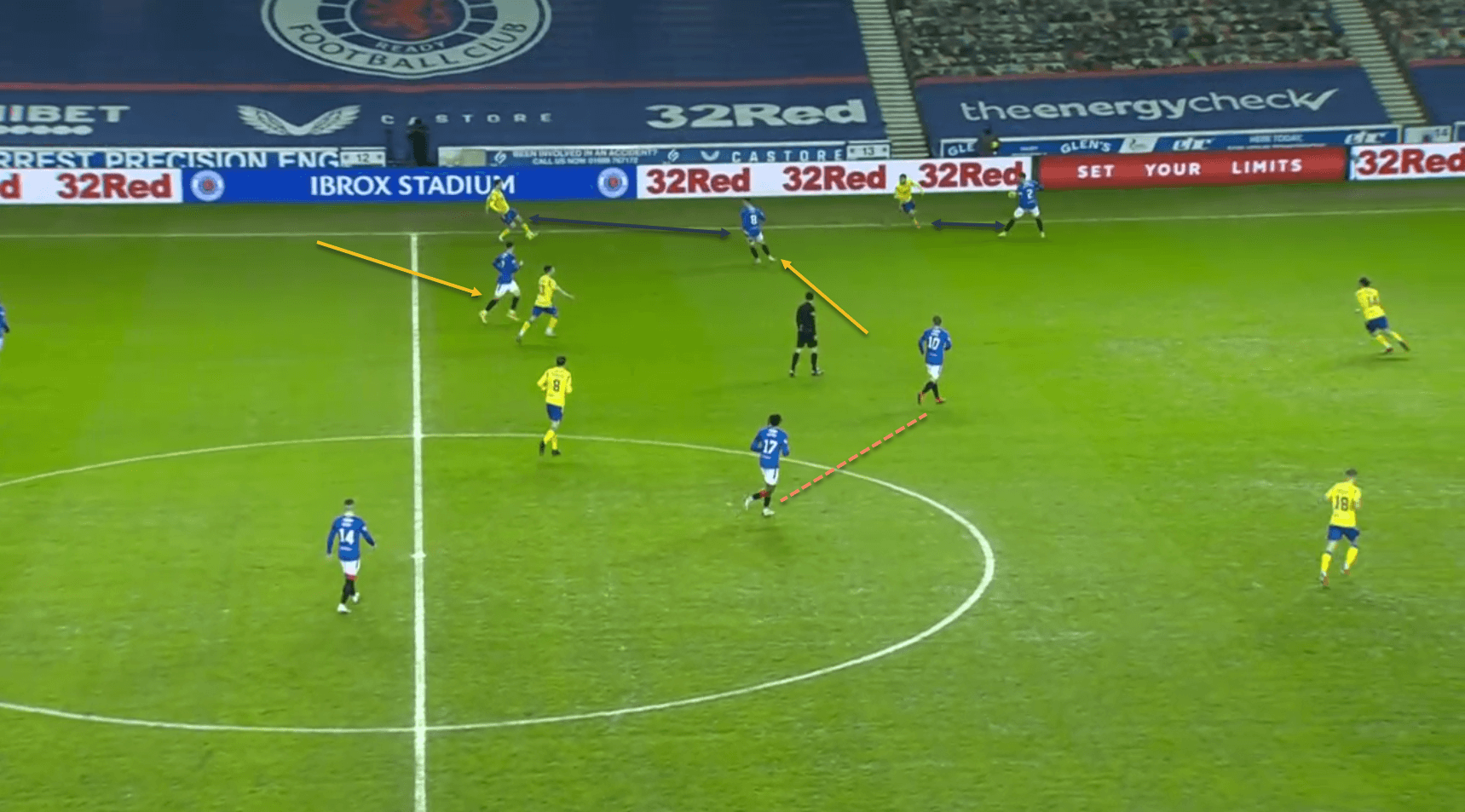 An example of the aforementioned positional switching – Tavernier is tracking the winger, while Barker has to drop into central areas to track the opposition full-back, who is underlapping, so Ryan Jack moves out to pick up the central midfielder who has gone wide.

This system is a loose version of man-marking, where the Rangers players usually stick to their direct opponents. However, it is not strict and players do need to be intelligent enough to track runners and defend space. 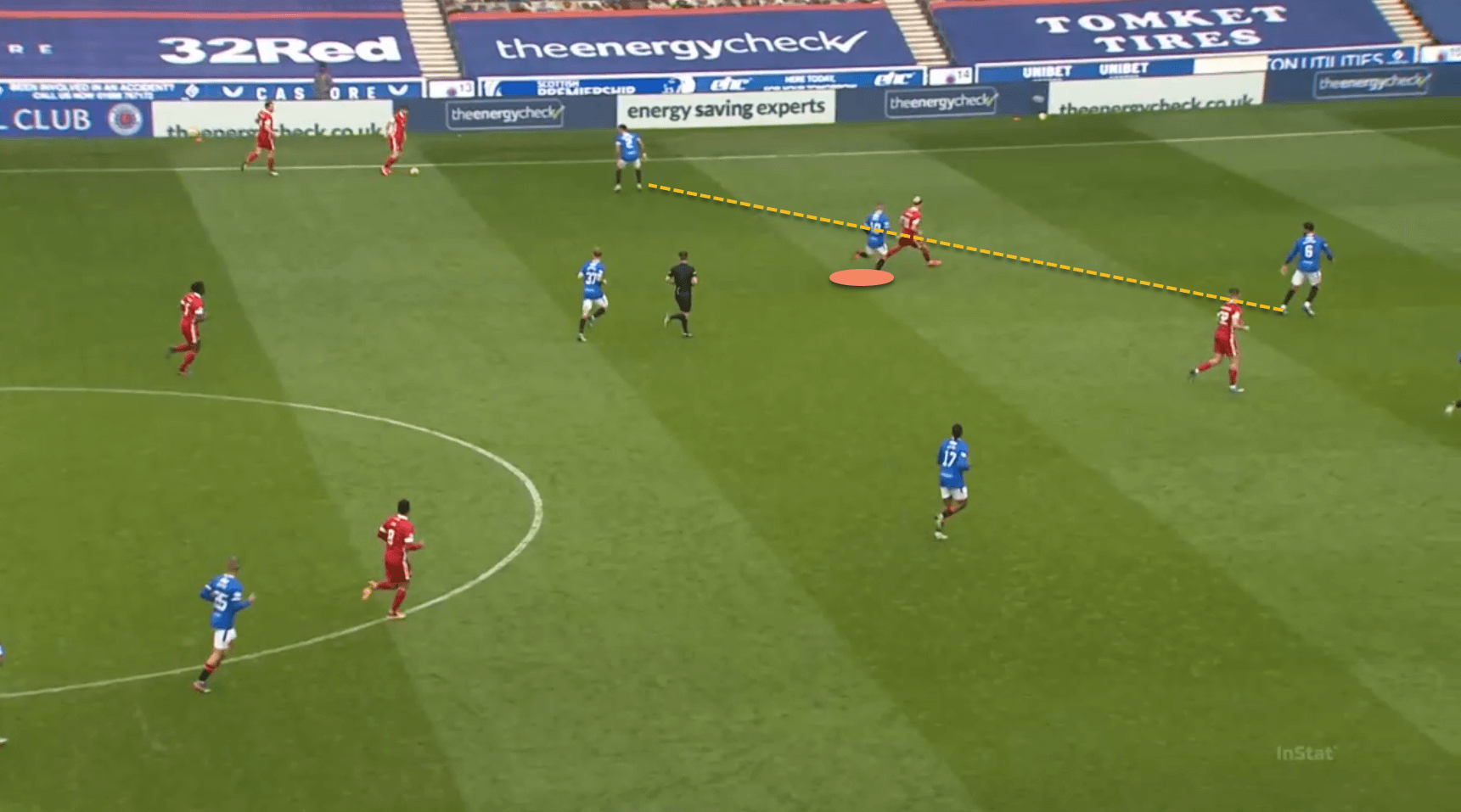 A huge gap has opened up here between Goldson and Tavernier since the right-back has stayed out wide. Therefore, Davis drops to track the Aberdeen attacker in that space.

Thus, Rangers have been able to generally maintain a compact defensive shape, with players moving to help out teammates and track runners when needed.

These may seem like simplistic tactics, but they have to be extremely well-coached to be effective, and Gerrard has certainly proven his mettle on that front. Rangers are a very well-drilled defensive unit, with each player knowing their role in the system, as well as the pressing triggers, while individuals are also able to understand when they need to drop and cover for teammates, as well as anticipate opposition passes. All of this, combined, has meant that the Gers have been nigh impenetrable this season, and is a big reason why they are almost certain to end Celtic’s dominance and pick up the Premiership title this season.