Low xG: How Napoli prevented Juventus from creating high-quality chances in Serie A

Juventus have been the champions of the Serie A for nearly the whole of the last decade, having won the title consecutively since the 2011/12 season. This year, however, there is a real threat to their throne with the likes of Inter and AC Milan already with an eight and seven-point lead over them respectively, albeit having played a game more. Juventus had been hoping to close that gap against Napoli but Gennaro Gattuso’s side had their own ideas, looking to get closer to the top as well. Despite a game that saw Cristiano Ronaldo and co. take 24 shots and have the bulk of possession, it was Napoli that came away with a 1-0 win and in this tactical analysis, we will see just how they managed to take the crucial three points. 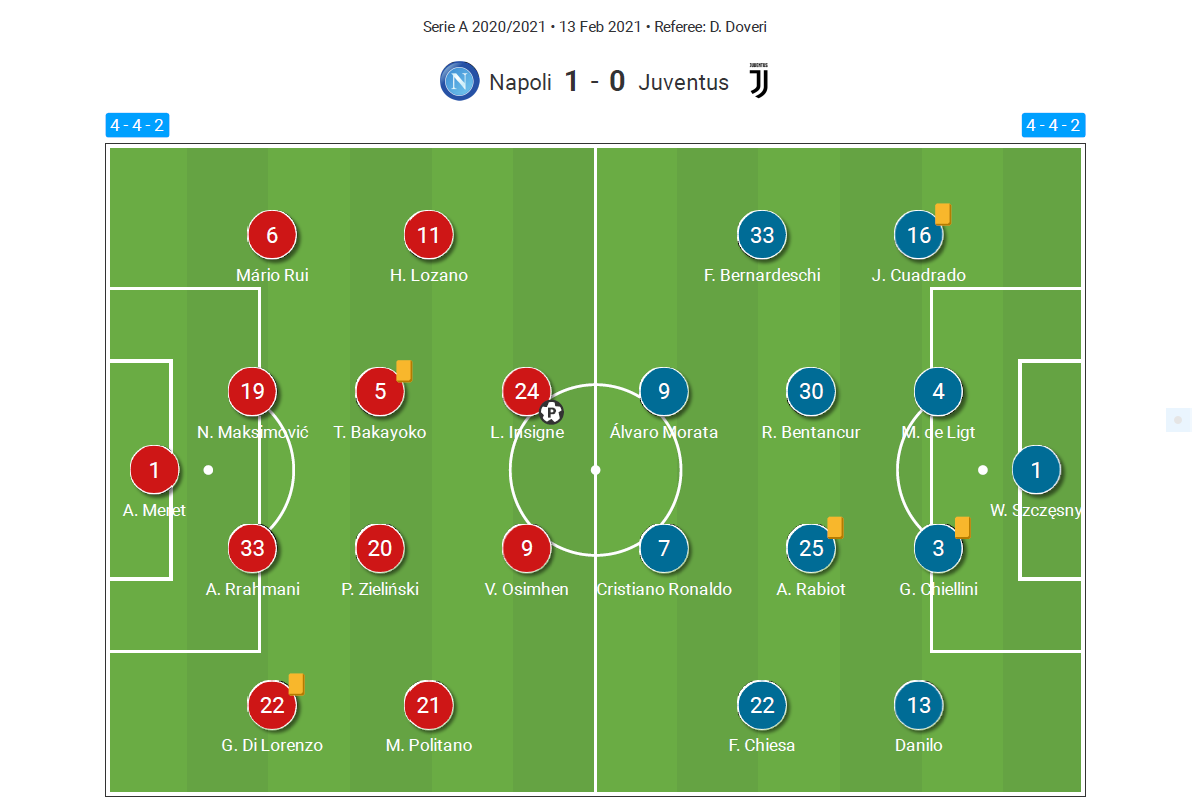 Both sides lined up in a 4-4-2 although we have seen Gattuso and Andrea Pirlo change these tactics during the game. Lorenzo Insigne has often had a free role for Napoli in order to aid the build-up and summer signing Victor Osimhen started for the second game running. Hirving Lozano started down the left as well, as Napoli looked to see a change in form, having been winless in their last three fixtures across all competitions.

As for Juventus, the talismanic Ronaldo started upfront along with Álvaro Morata. Federico Chiesa and Federico Bernardeschi started down the wings while Juan Cuadrado started at right-back. We have often seen Pirlo modify the shape to a back three with wing-backs with Cuadrado and Danilo pushing forward while one of the central midfielders drop down to the backline. Having seen the lineups, let us not get into the analysis of the game.

Juventus look to break through the Napoli press 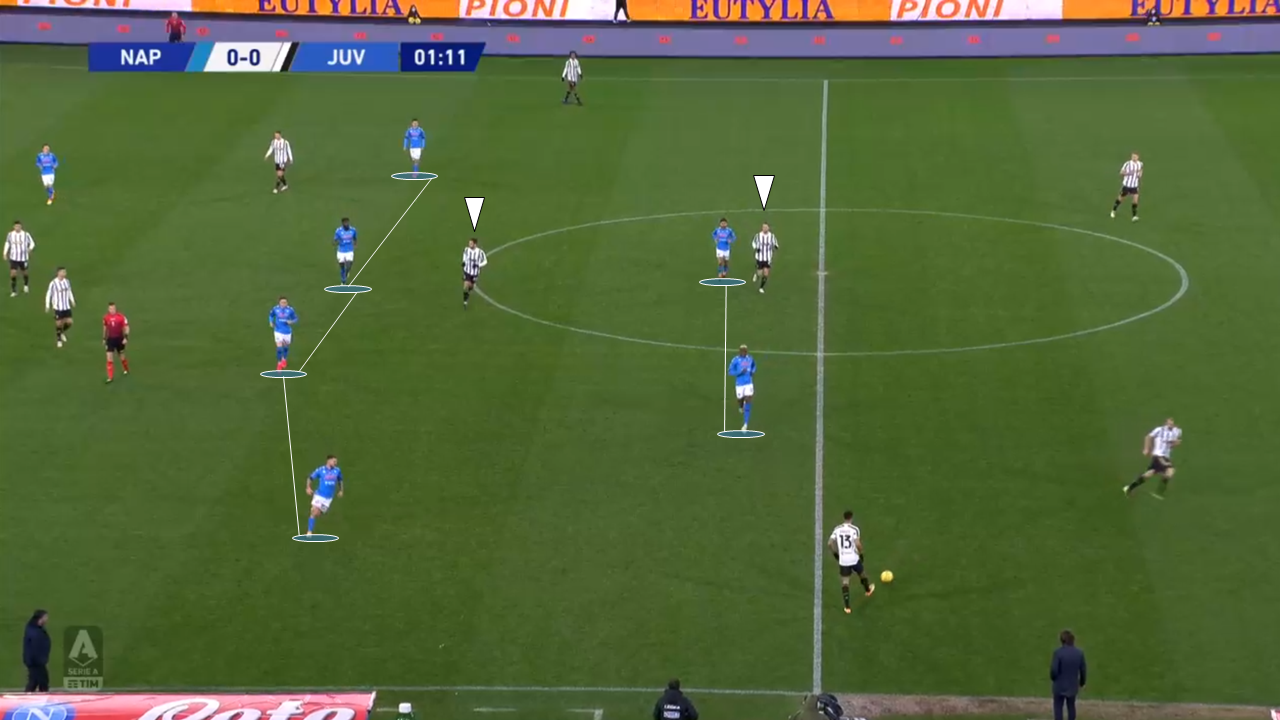 Off the ball, Napoli maintained their 4-4-2 shape, with the front two looking to cut out the pass to the pivot. The midfielder four stayed close to the other central midfielder in order to force Juventus out wide. The likes of Danilo and Cuadrado moved up, as we mentioned earlier, to provide the width that was needed as Juventus looked to progress the ball forward. With the progression through the centre not being a viable option, we saw the likes of Chiesa and Bernardeschi move out wider to receive the ball as well. 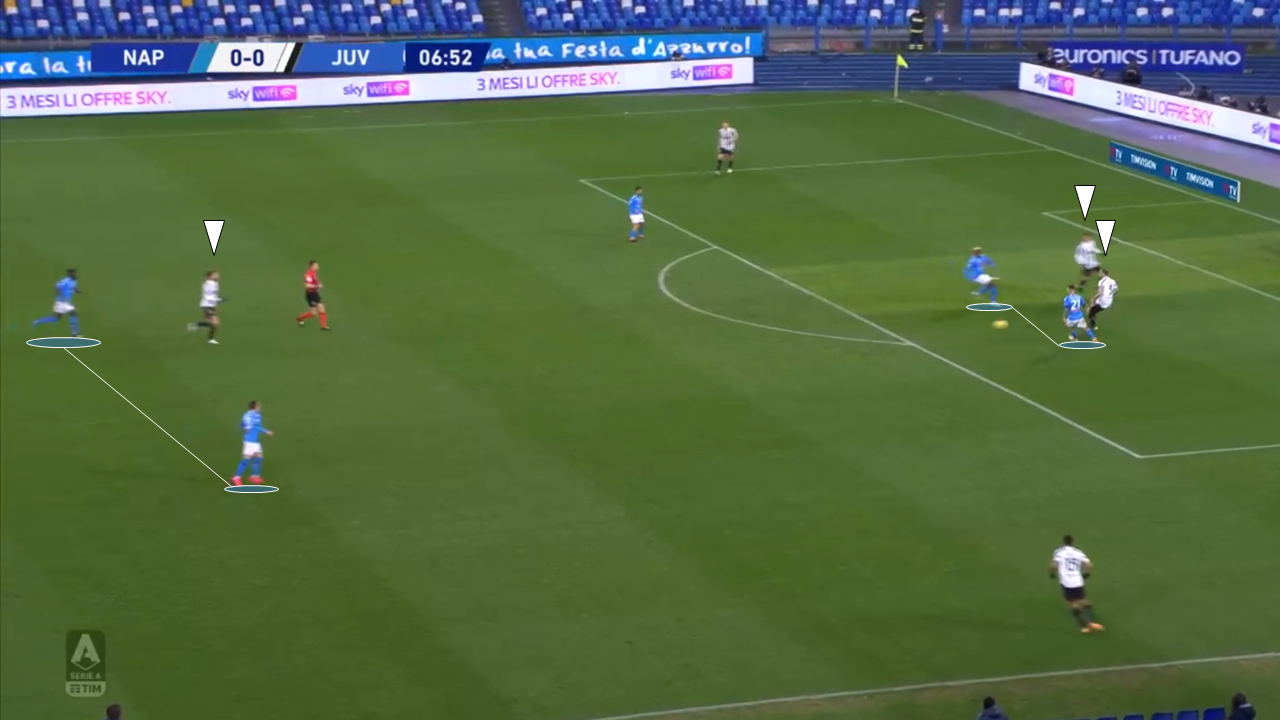 However, while this may seem to have played into Napoli’s hands, Juventus were comfortable in stretching them vertically. The backline was comfortable dropping back and playing on the ball, which meant that regardless of the pressure put on them by the front two, they were able to keep possession and cycle the ball among themselves. The Napoli central midfielders could not overcommit forward either and this meant that the Juventus backline could then pass to the pivot who would drop back.

The fact that the centre-backs were comfortable on the ball was a key factor in Juventus being able to play out of the press as they were not caught out with their passing or positioning like Napoli would have hoped. The Napoli central midfielders could not overcommit, as we mentioned earlier, and they had to adopt a more defensive approach by staying behind and not completely engaging the pivot. 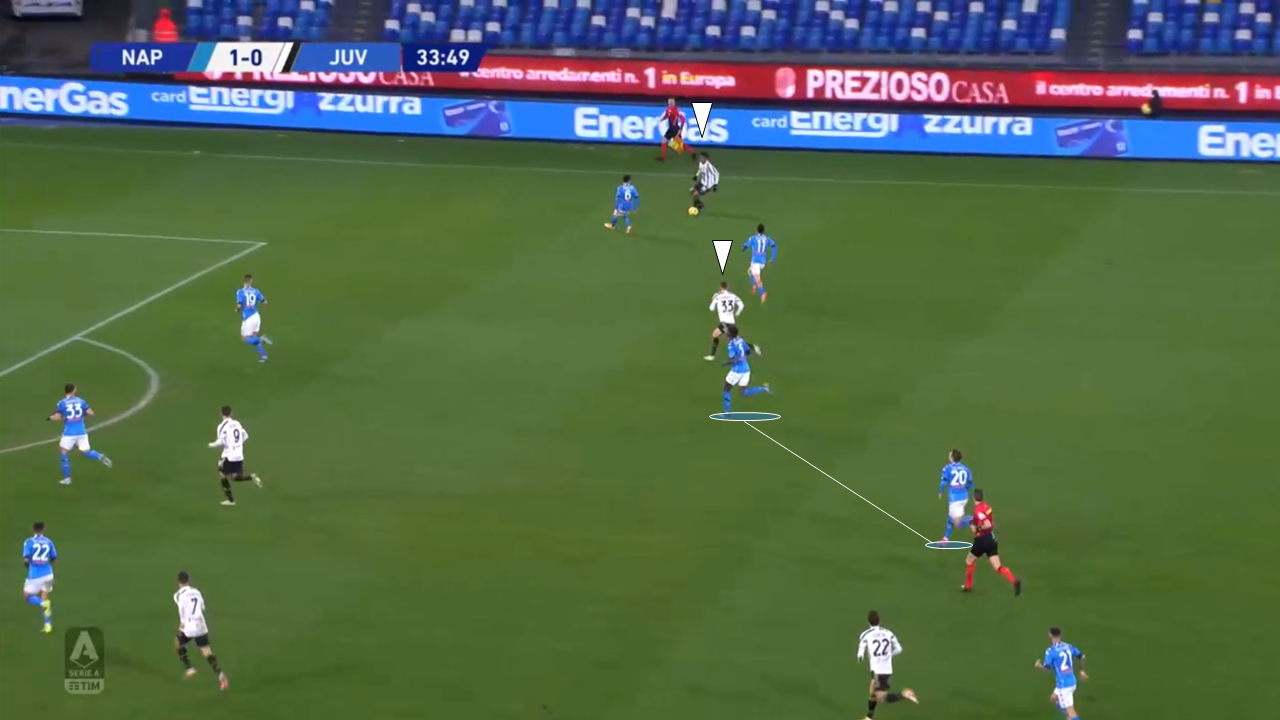 Once the first line of the press was breached, Juventus looked to their wing-backs, mainly Cuadrado. The ball was often moved out to the right side and having been stretched vertically, Napoli had to get back and regain their shape. The central midfielders had to ensure that they did not leave too much space between them and their backline for the forwards to operate while the wingers had to look to snuff out the danger down the flanks.

While Juventus did look threatening at times, Napoli were still able to ensure that they sorted themselves out in time and could get back into their solid defensive structure. While the Juventus wing-backs and wingers were delayed somewhat in the transition by Napoli, their own decision making was also poor in certain stages and they lacked the incisiveness that they needed to take advantage of Napoli being stretched vertically. 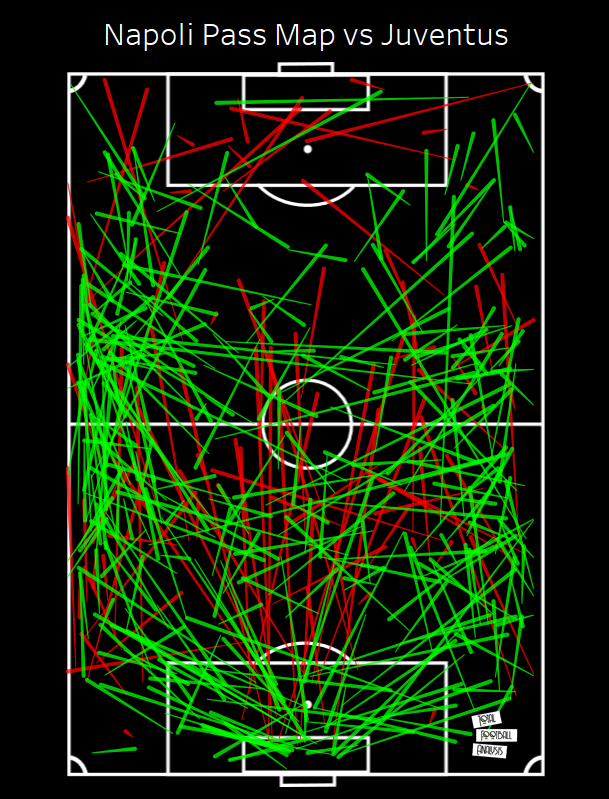 Looking at Napoli’s pass map, we see a heavy reliance on wing play, primarily down the left flank. Lozano and Osimhen were crucial to this structure as Gattuso looked to make use of their pace to play the ball down the left channel and open up the Juventus defence. From the pass map, we can clearly see the lack of build-up through the centre, with plenty of long balls aimed towards the half-space. We shall see examples of this below. 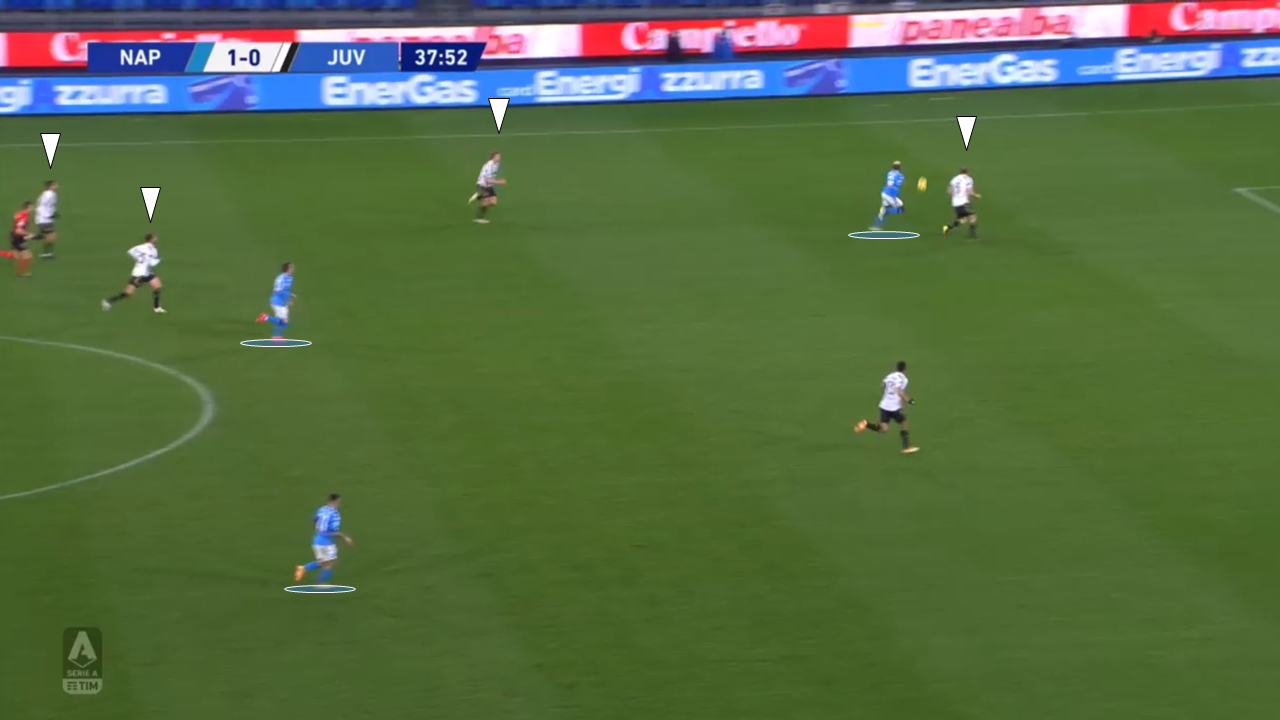 Above, we see Osimhen being played into space on the left-wing. With Juventus pushing their wing-backs forward, Napoli aimed to utilise the space behind them in order to threaten the opposition defence. Considering that Cuadrado was Juventus’ main option down the wing in the attack, it was his flank that Gattuso targeted, with Lozano and Osimhen given the freedom to make their most of their pace and movement in this region. The Juventus defence would be out of shape in such scenarios and from there Napoli could even look to switch the play to the other wing, where a forward could be in loads of space as shown below. 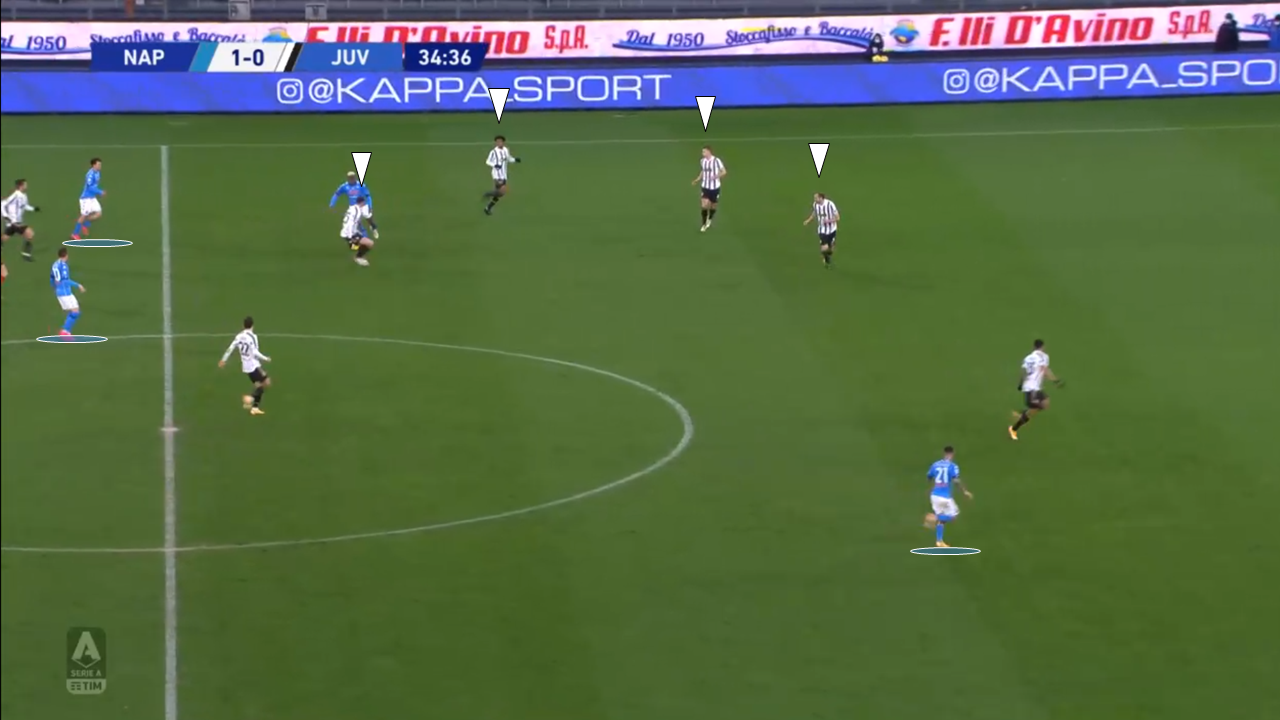 While Napoli were not very effective with their switches of play in that they did not make the most out of it, it was still a very potent threat that troubled Juventus. All the defence could do was to get men behind but the quickness of the attack still meant that they were often caught out of shape. In such scenarios, Juventus gave away plenty of fouls down the left-flank as they were not able to suitably cope and this was a crucial reason as to how Napoli scored. While it did not directly lead to a goal-scoring attack, a free-kick given down the left wing was the cause for a Giorgio Chiellini challenge that ended up given as a penalty after a VAR review. Insigne made no mistake from the spot and despite not necessarily dominating or imposing themselves on the game offensively, Napoli went ahead.

Quantity over quality for Juventus 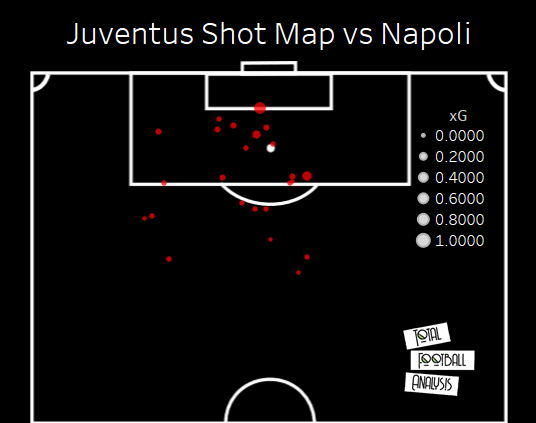 Juventus took a total of 24 shots on target in the game with an xG of 2.25 overall. However, only one of their chances was above an xG of 0.5, meaning that only one chance had over 50% probability of going in. This chance fell to Ronaldo in the six-yard box at the end of the corner but from point-blank range, the Portuguese forward could only hit it right at the keeper. The cause for worry, however, is the fact that apart from this, Juventus failed to create any high-quality chances. 9 out of 24 chances, or 37.5%, were from outside the box with the majority of them not threatening the goal. Other chances within the box were limited to headers from crosses and below, we will see how Napoli could effectively defend against them. 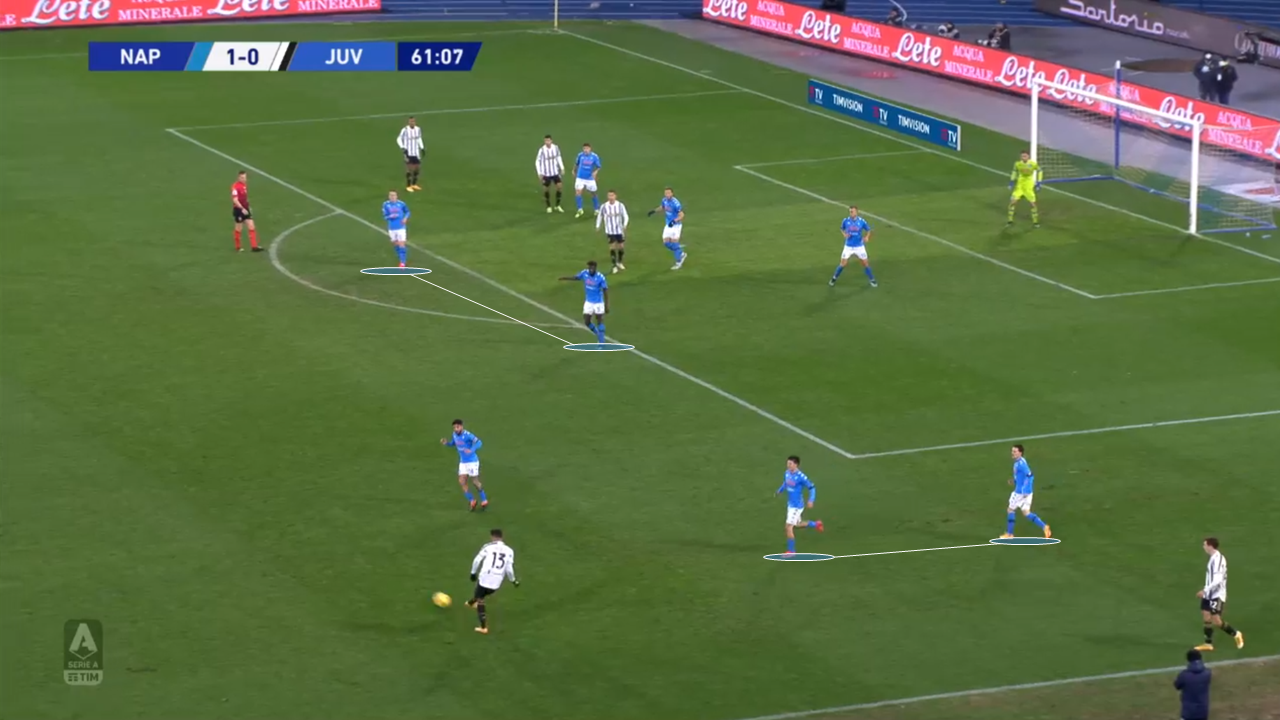 With Juventus looking to play the ball out wide, Napoli aimed to create overloads down the wing. The winger and the full-back would play as a unit in order to prevent the cross from going in while the likes of Insigne would drop in for support in order to ensure numerical superiority and prevent Juventus from playing past them. The central midfielders also took up a very deep position in order to ensure that they were in prime position to offer aerial support from crosses but also able to move up and defend through the centre should the ball be played there. 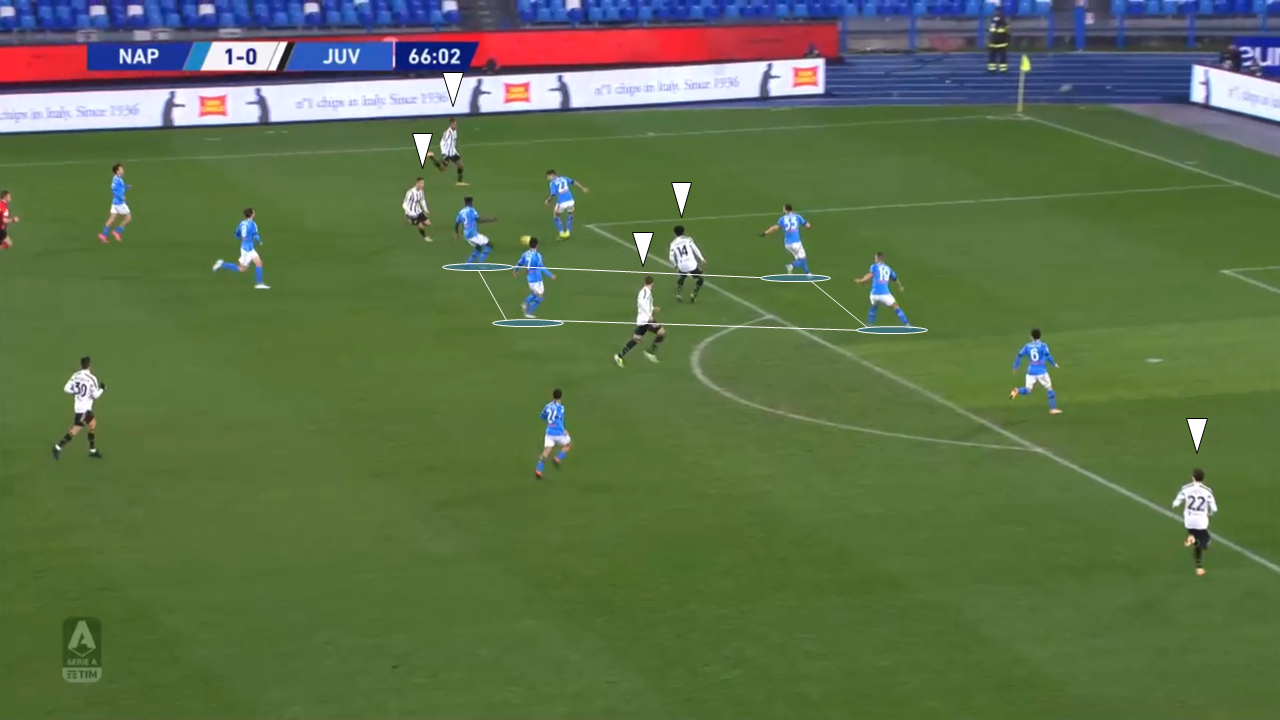 This was crucial when Juventus tried to play into the half-spaces, as it ensured that Napoli had enough players close to the ball to be able to stop any quick passes as Juventus looked to breakthrough. It did mean that they gave away a few free-kicks on the edge of the box as well, but once again Juventus failed to make the most out of it. Hence, Napoli were able to frustrate Juventus by preventing them from getting a good sight of goal. 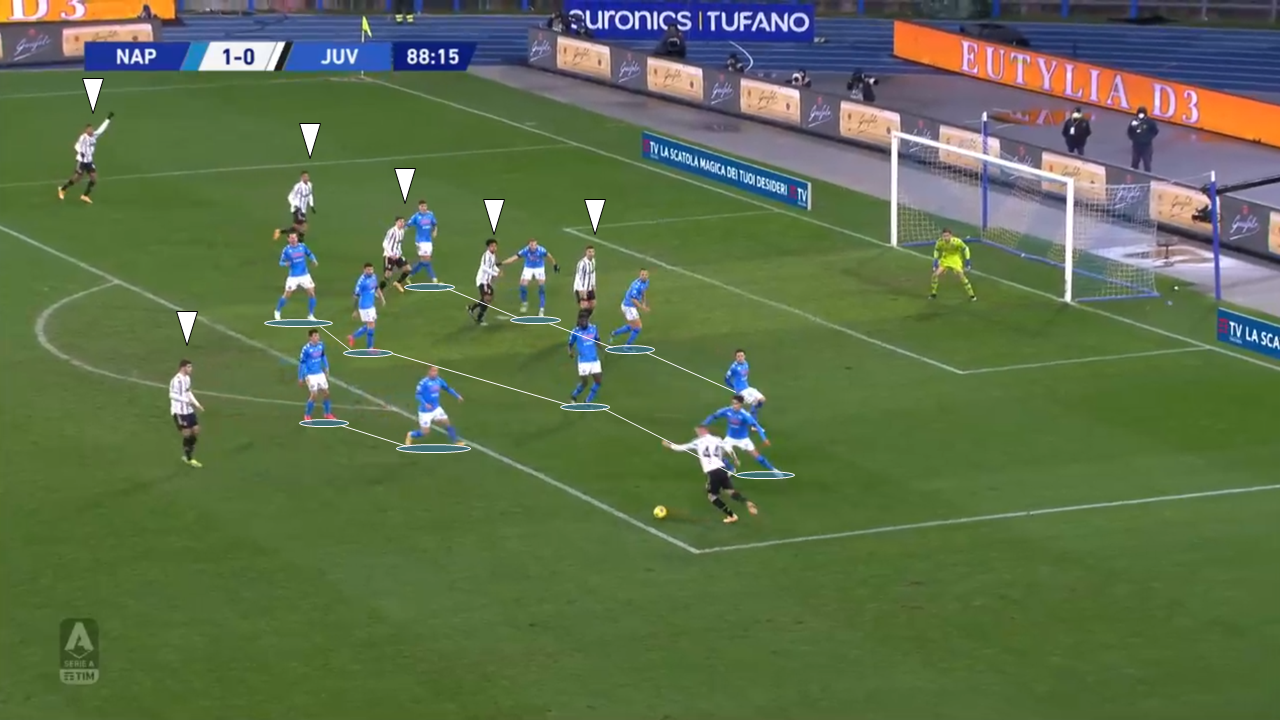 When it eventually came down to kitchen sink time, Napoli had all hands on deck, shaping up into an extremely compact 4-4-2 with everyone behind the ball. It was not by any means panic-stricken last-minute defending as Gattuso’s side looked to thwart any pass towards the centre. There were always one or two players engaging the player on the ball and in the box, the positioning of the defenders made it nearly impossible for Juventus to create a clear chance. Even as Juventus looked to create some width by pushing the wing-backs even higher, the Napoli compact was too solid to create anything substantial, reducing Juventus to lower quality chances as we saw above.

In this way, Napoli were able to remain resolute and run the clock down, taking all three points.

Overall, the game was more than just a smash and grab from Napoli, who were able to restrict Juventus with their resolute defending. The win sees them move to fifth in the table and should they win their game in hand, they could climb to third. It is also a massive boost for the side after losing in the Coppa Italia semi-final to Atalanta as well and Gattuso would be hoping that his side could have a strong second half of the season.

Juventus, however, failed to close the gap to the top and while their focus turns to the Champions League knockouts, they surely have to find a way to create better chances for themselves if they are to retain their crown.