Lazio faced off against Juventus in Serie A this past weekend in what was a game that struggled to live up to its high expectations. Both sides seemed quite pragmatic and cautious in their approaches despite rather below-average starts for each team in the league this season.

Lazio are currently sitting in ninth as of writing. Yet, they finished in an incredible fourth place, reaching UEFA Champions League qualification and finding themselves in a title race for the vast majority of the last campaign. Although, in all fairness to the Biancocelesti, they were quite unfortunate at the start of the season, with several players testing positive for Covid-19, leaving manager Simone Inzaghi quite thin with regards to his team selections.

Juventus, on the other hand, have started quite poorly by their standards and are sitting in fifth at the moment after this 1-1 draw with Lazio last Sunday. From an outside perspective, it would seem that the new manager Andrea Pirlo has yet to figure out his best starting eleven or formation, with the Bianconeri being quite inconsistent in terms of their recent results domestically as well in European competition.

This article will be a tactical analysis of the draw between Lazio and Juventus. It will be an in-depth analysis of the strengths and weaknesses of both sides in their tactics, throughout the game, as well as taking a look at where each team could have improved in their set-up. 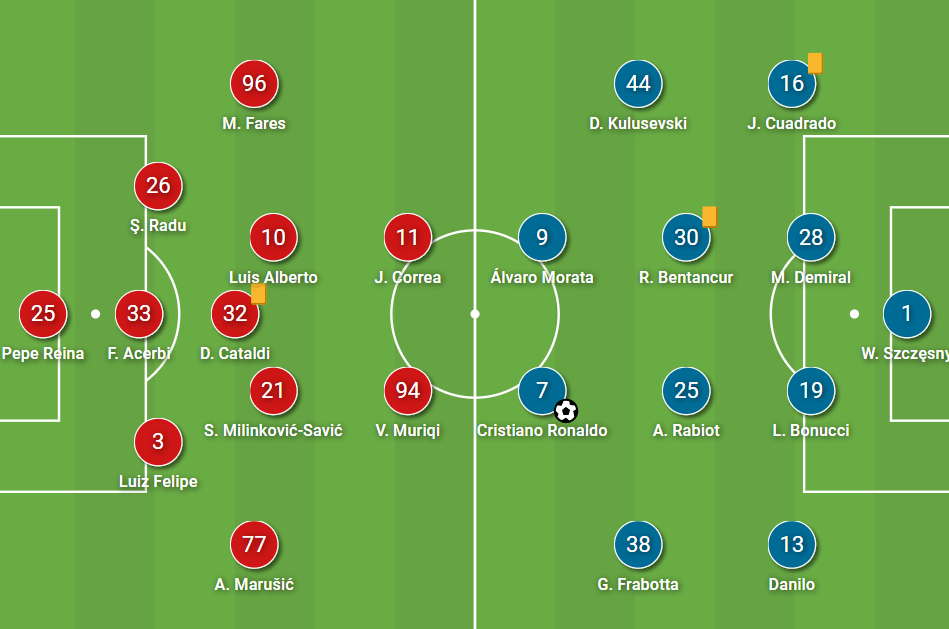 Inzaghi kept his favoured formation in the 3-5-2 going into this game, and there were a number of changes to the starting eleven from the side who drew 1-1 to Zenit mid-week in the Champions League.

The only centre-back in the back three who kept their place was Francesco Acerbi. Wesley Hoedt and Patric were replaced in the starting lineup with Stefan Radu and Luiz Felipe. Both wingbacks, Adam Marusic on the right and Mohamed Fares on the left, kept their place.

The only central midfielder to keep their place was Sergej Milinkovic-Savic, who played in a three with Luis Alberto as well as Danilo Cataldi as the single-pivot. The partnership of Joaquin Correa and Vedat Muriqi was maintained from their mid-week game also.

For Juventus, Pirlo made wholesale changes. As stated before, the Italian legend seems to have yet found out his best starting lineup and formation. He deployed a 4-4-2 instead of a 4-3-3 in this one, and the backline, including the goalkeeper, remained exactly the same apart from Merih Demiral in place of Giorgio Chiellini at centre-back.

Arthur Melo and Aaron Ramsey were both replaced with Rodrigo Bentancur in a double-pivot alongside Adrien Rabiot as well as Gianluca Frambotta, whilst Dejan Kulusevski took the place of Federico Chiesa on the wing. Cristiano Ronaldo partnered next to the in-form Alvaro Morato up top.

Juventus are very much a possession-oriented side under Andrea Pirlo and have been under his predecessors Maurizio Sarri and Massimiliano Allegri also. They like to dominate possession and build their way through the thirds of the field with fluid passing football.

In this game, Juventus deployed a 4-4-2, and when they built out from the goalkeeper, the shape resembled this. Their double-pivot were extremely important in progressing the ball from the backline before bringing it forward to more progressive areas of the pitch.

Between both Bentancur and Rabiot, the pair played 15 progressive passes throughout the 90 minutes, completing 10, and also completed a combined total of 12 passes to the final third, completing 10 as well. 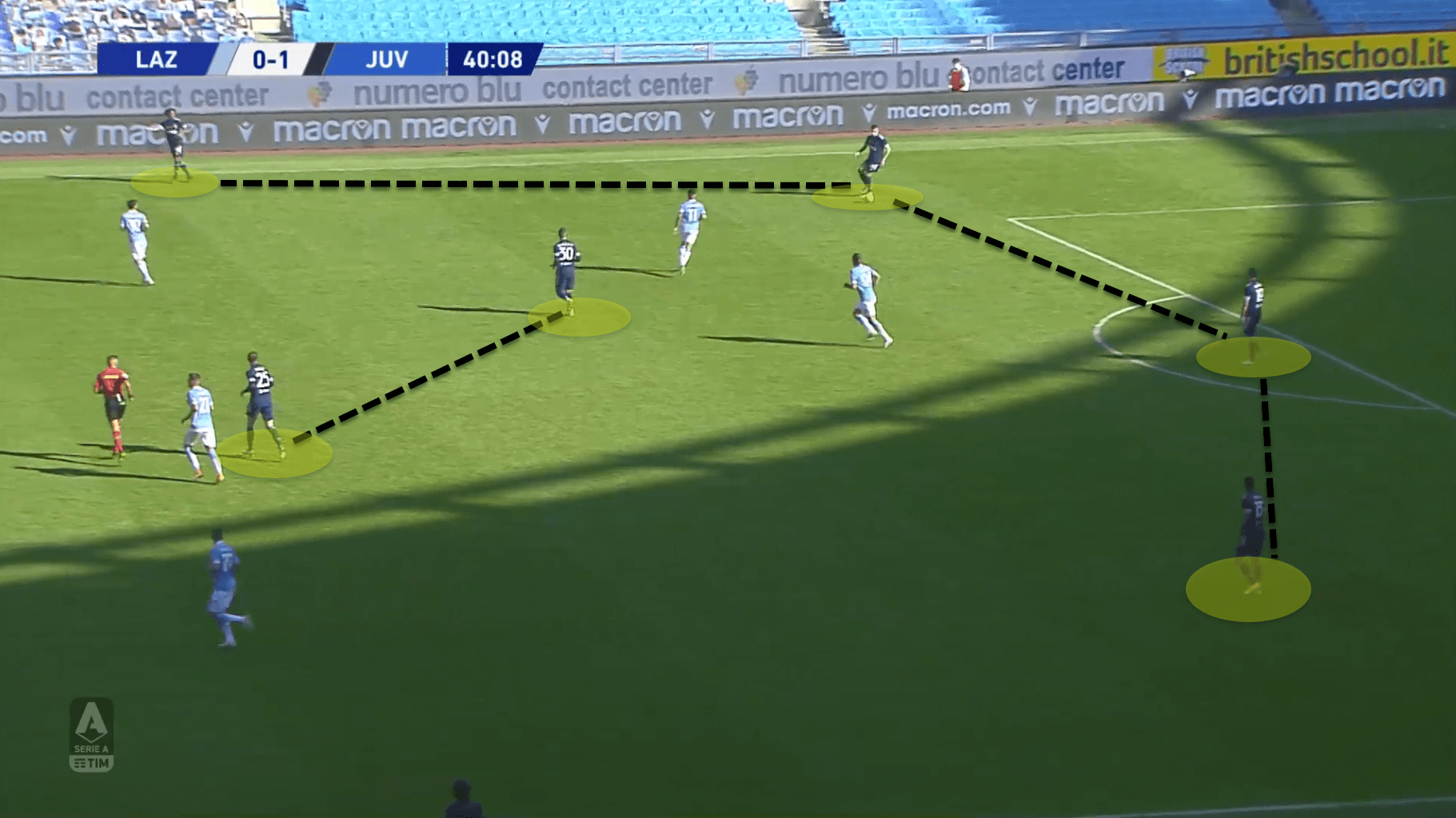 This is how Juventus set up in their 4-4-2 shape using their double-pivot against Lazio. Generally, teams who play possession-based football, and who use a back four, push their fullbacks high by dropping their pivot player either next to or between their centre-backs, creating a back three.

However, Juventus did not do this. Instead, Pirlo instructed his fullbacks to stay back whilst in the build-up phase of the attack in order to help their two centre-backs and goalkeeper to circulate the ball around, in search of gaps in Lazio’s front press.

The double-pivot operated very much like as a see-saw. Typically, Bentancur would drop shorter in between Lazio’s two centre-forwards to act as a split pass option to progress his side into the next phase of play. Rabiot would fluctuate between dropping short next to the Uruguayan pivot player, or else push up behind the Lazio midfield line in order to play between the lines, pushing their opponent’s midfield deeper to mark him. 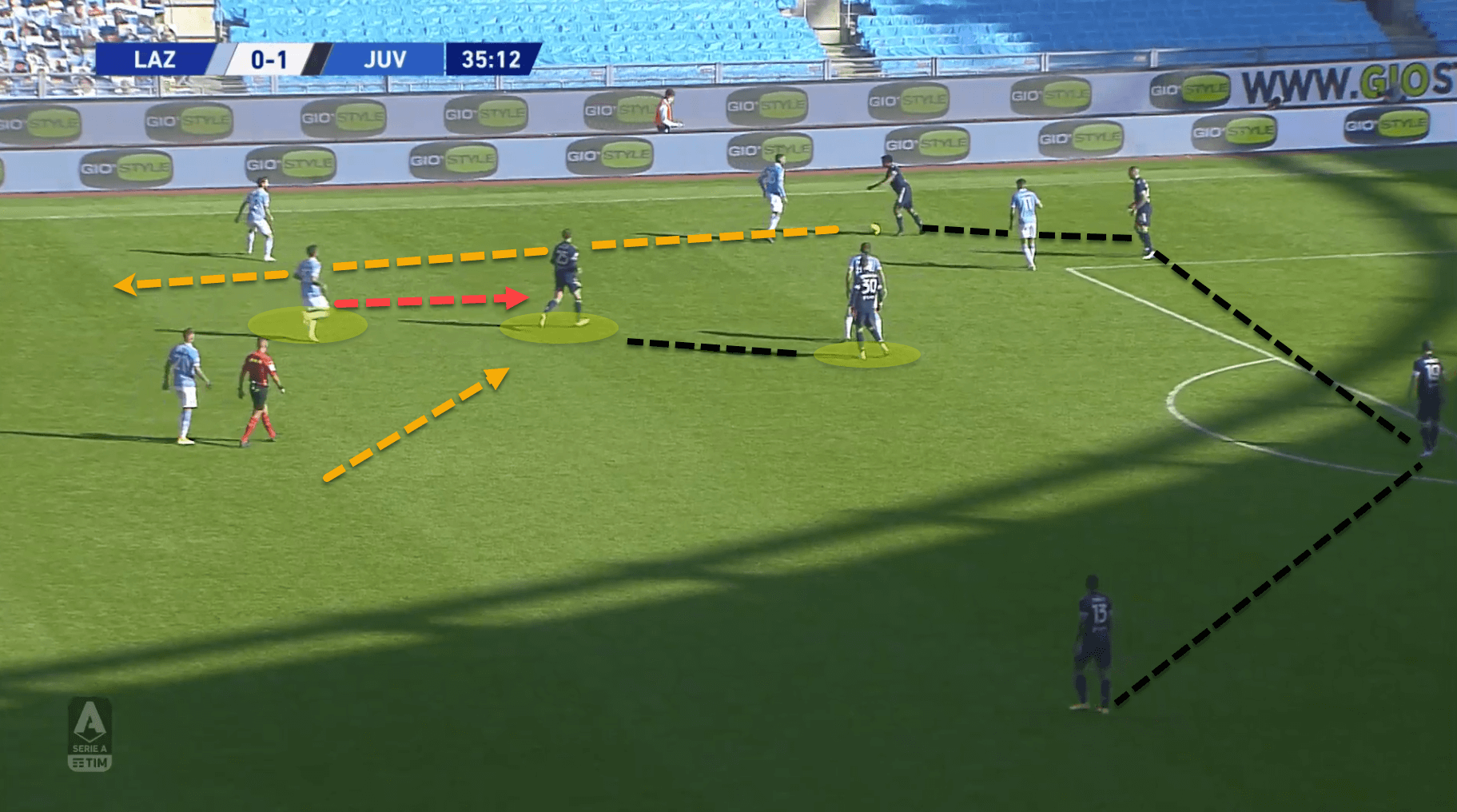 Once again here, we can see this build-up structure. Rabiot’s movement was vital for Juventus to play through Lazio’s high press. If he moves behind their midfield line, the midfield will drop back to cover him, however, as can be seen in this image above, by dropping short, Alberto moves out of the midfield to mark him, which leaves space for Juan Cuadrado to play through into one of Juventus’ forwards, easily breaking the Lazio high press.

By being efficient in the first phase of the attack, it allowed Juventus to progress into more advanced areas of the pitch. Once they did, their team structure changed slightly, which can be seen in the following in-game footage; 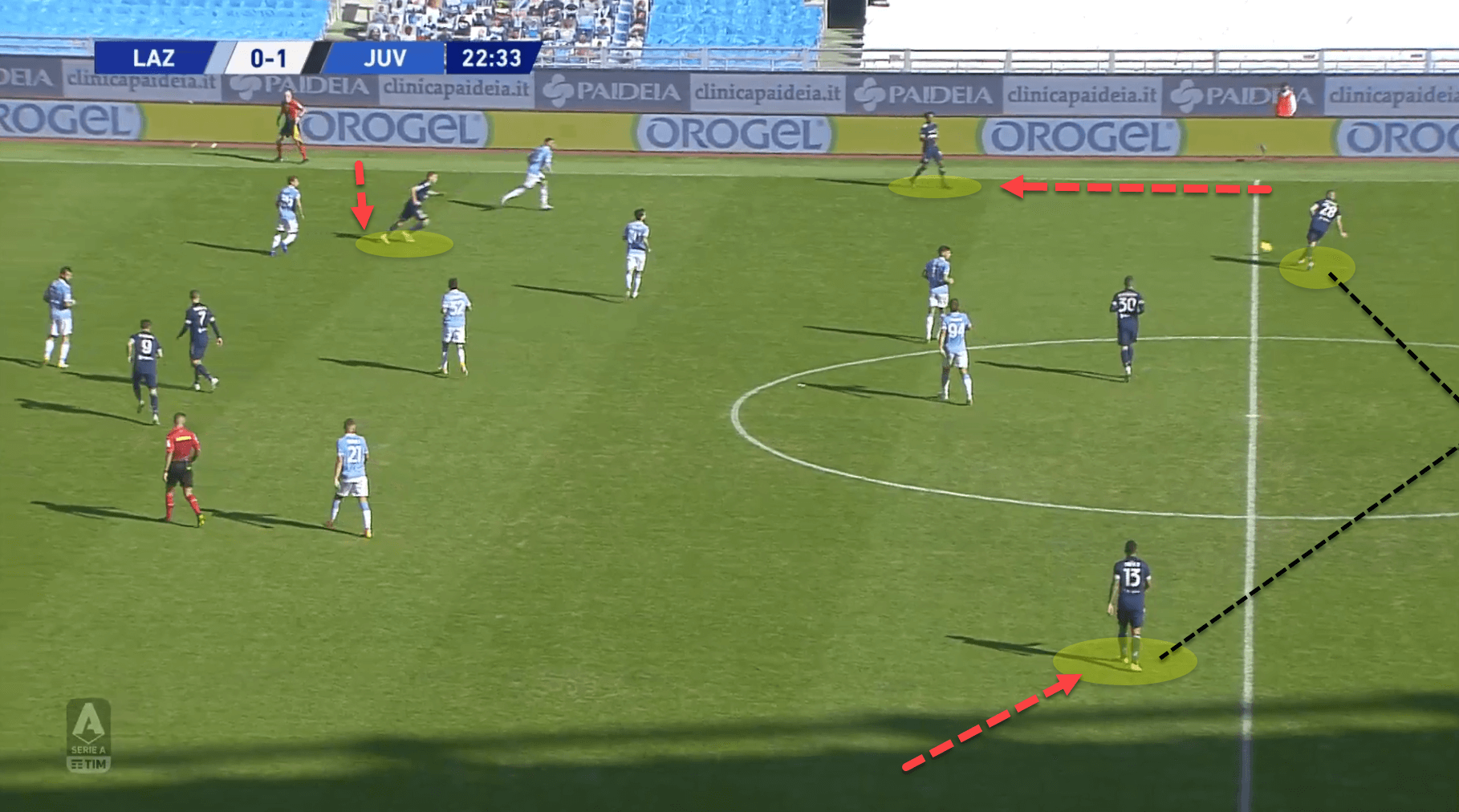 As can be seen in this image, Juventus’ backline converted to a back three when they progressed high up the pitch. By utilising Danilo as a right-footed left-back, this allowed him to push inside to become a third centre-back.

Frambotta and Cuadrado acted as wingbacks, keeping the width of the team in order to stretch Lazio’s defensive block. It also allowed Kulusevski to push into the halfspaces and play as part of a front three alongside Ronaldo and Morata, with Bentancur and Rabiot still remaining as a flexible double-pivot in the centre of the park.

Even when Juventus got into the final third, they kept this same structure, which led to the opening goal of the game after fifteen minutes of play. 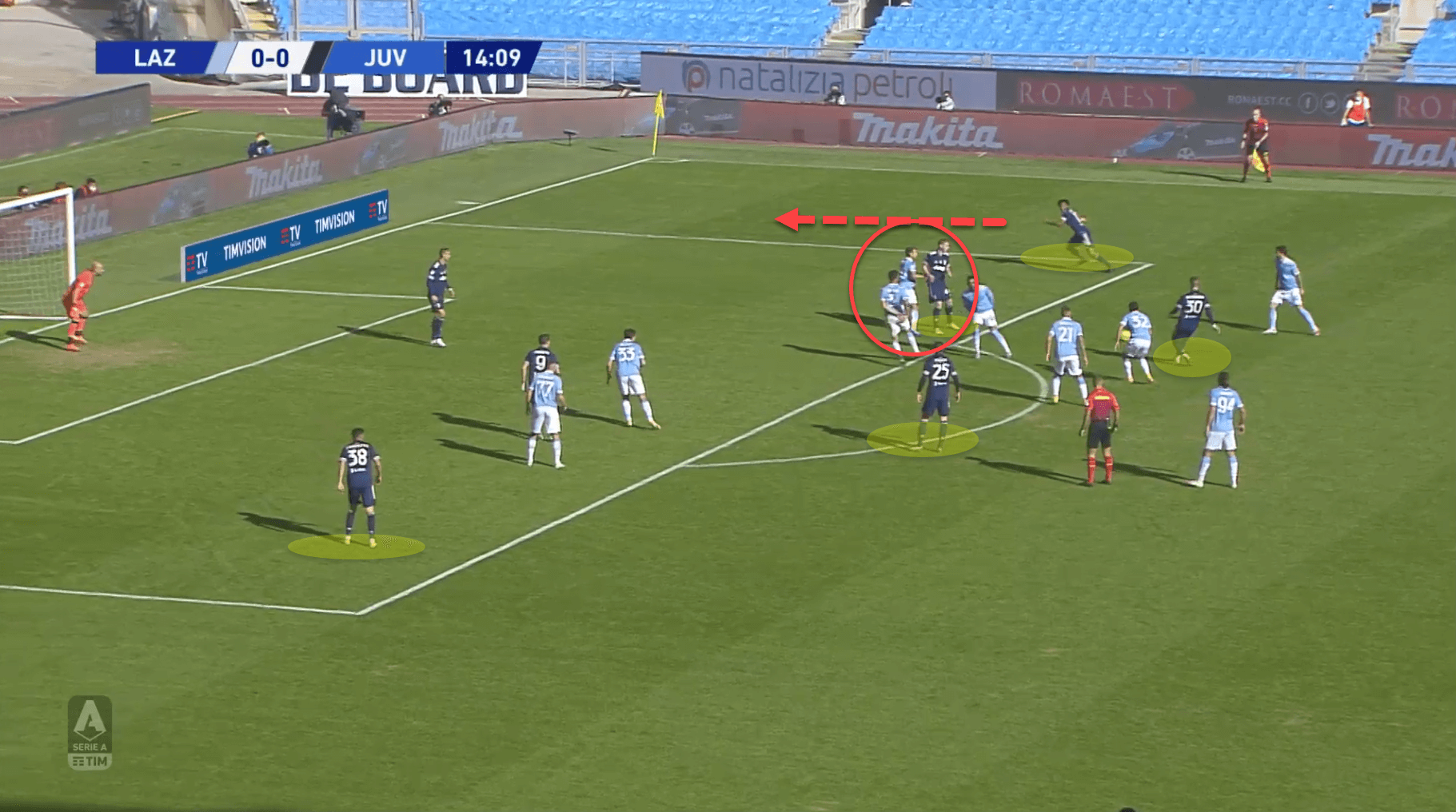 Cuadrado and Frambotta held the width for the goal, whilst Kulusevski pushing inside as another forward was a brilliant tactical move by Andrea Pirlo as by doing so, the opposing wingback followed him inside due to Lazio deploying a narrow defensive block, which allowed Cuadrado a lot of space on the right flank to cross to Ronaldo for the goal.

Lazio denying space in between the lines

Despite Juventus’ early success, the game grew more and more difficult for them due to Inzaghi’s excellent tactical set up of his team whilst they were in the defensive phases.

They pressed Juventus quite high up the pitch when I Bianconeri were playing out from their goalkeeper, to try and stifle their build-up, however, once Juventus bypassed this press, Lazio’s players were instructed by their manager to drop off into a 5-3-2 defensive mid-to-low block.

As Juventus love to play in between the lines with their forwards, hence why Kulusevski moved inside to create a front three, Inzaghi wanted to deny Pirlo’s side any space to do this.

They did this by always making sure that the three central midfielders covered the central areas, even if Juventus played out to the flanks. 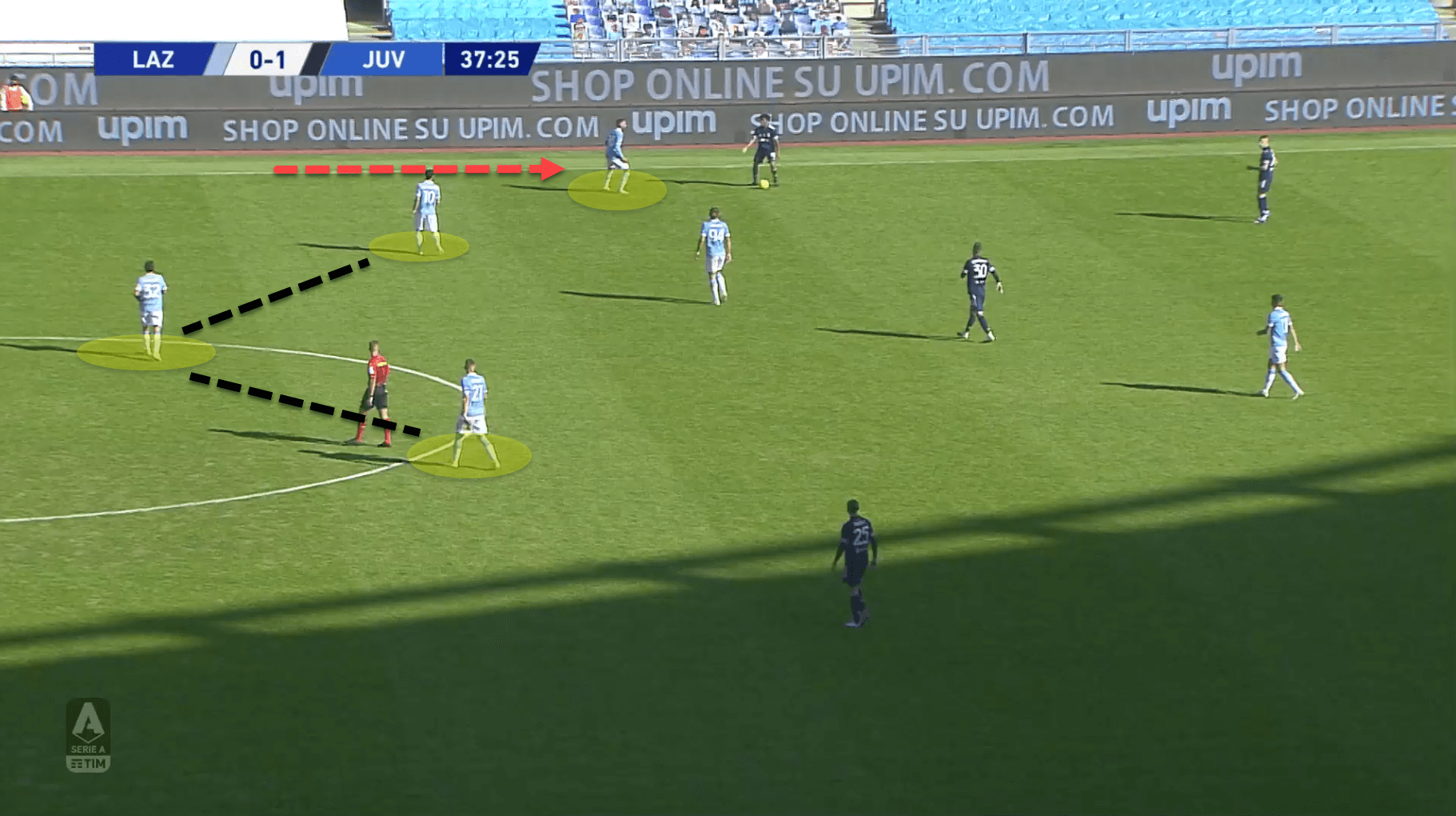 Typically, when a team plays a system without conventional wingers whether it be a 5-3-2 or a 4-3-1-2, the wide central midfielders tend to push over and close the opposition’s fullbacks or wingbacks when they receive the ball on the flanks.

Against Juventus, Inzaghi instructed his central midfielders to remain in the central areas and try to maintain a good distance, in their mid-to-low block, with the backline in order to smother the space in between the lines that the Old Lady had to play in.

They did this by using allowing their wingbacks to close down the Juventus wingbacks, meaning that their three central midfielders did not need to vacate any central spaces that Pirlo’s forwards could exploit, which can be seen in the previous image.

This worked exceptionally well, and it prevented Juventus from getting any space between the lines in the central areas, which is where they excel. 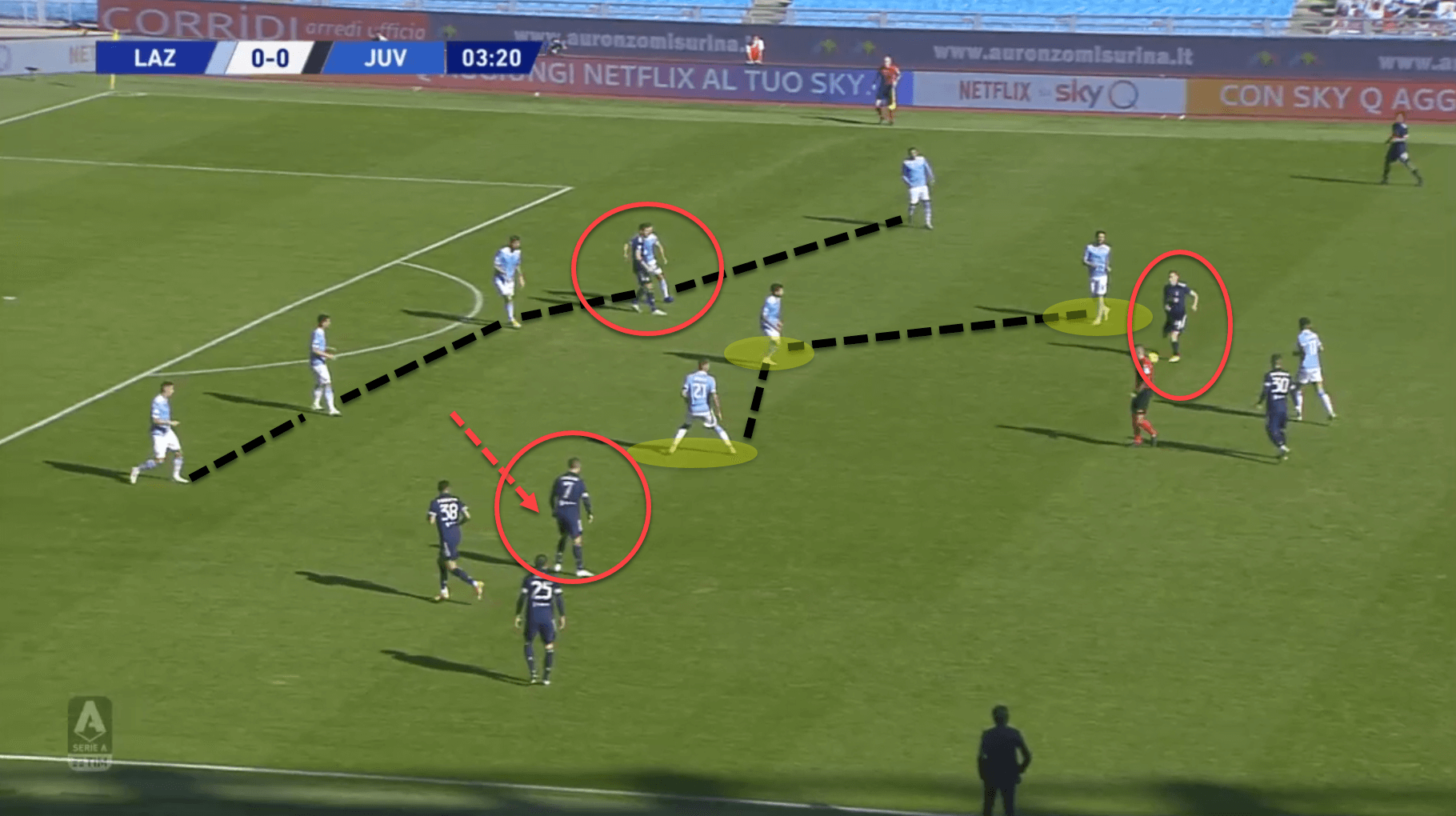 In the image above, we can see this suffocation of the space, which forced both Ronaldo and Kulusevski to vacate this dangerous area in order to receive a pass, leaving only Morata to be dealt with between the lines.

This game was certainly fought on the flanks. Both of the goals in the 1-1 draw came from persistent and excellent pieces of play in the wide areas.

Whereas Juventus were forced to play out wide due to Lazio’s compact defensive mid-to-low block, it was a part of I Biancocelesti’s game-plan to use the flanks. Very similar to Atalanta, Lazio create overloads in the wide areas by numerically overloading one side of the field, pulling across their opposition’s entire defensive block.

This not only allows them to try to break their opponent’s defensive line in order to get crosses in, it also allows them to switch the play effectively, which is exactly what Lazio did in this match. 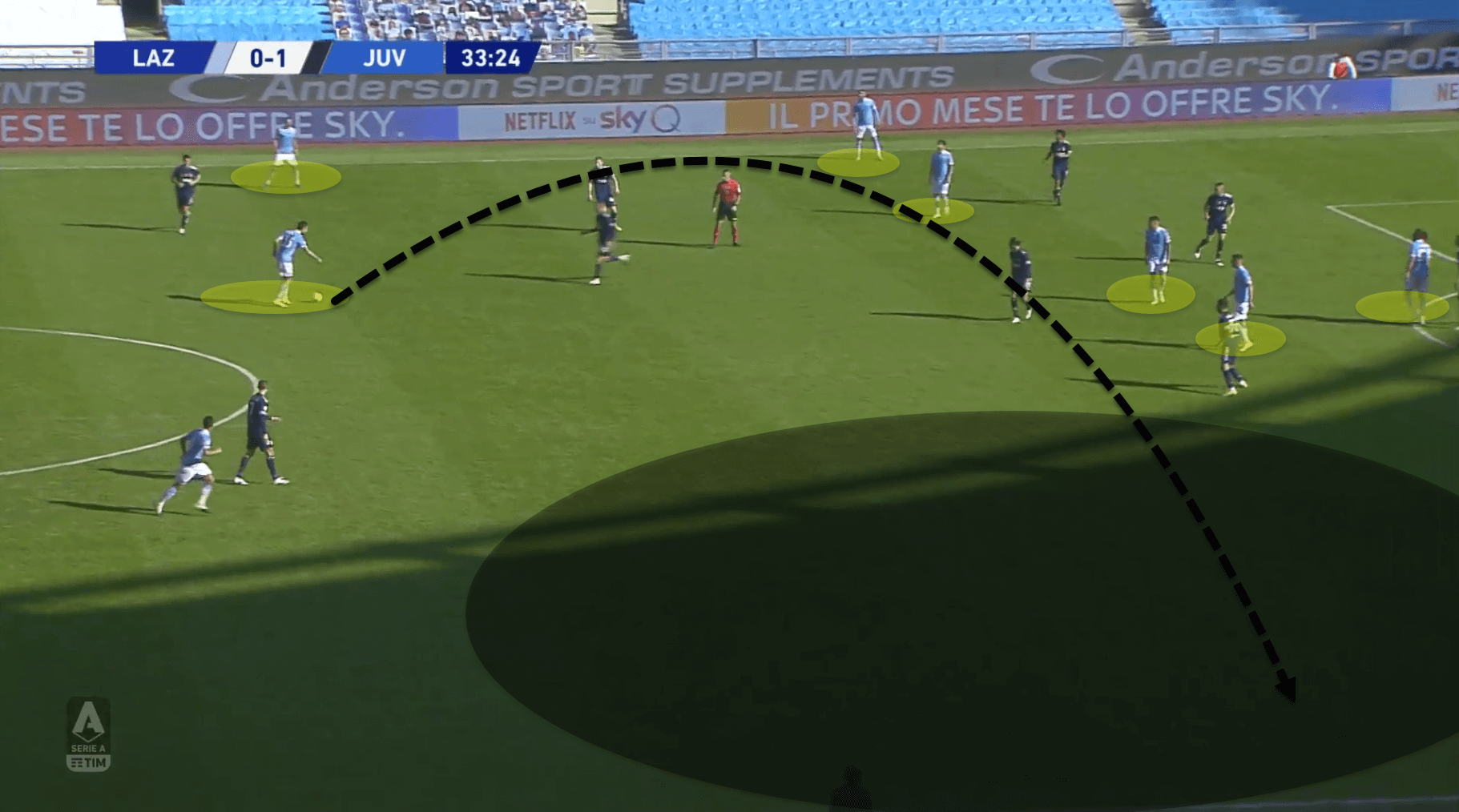 Here we can see this numerical overload in the wide area in action. Lazio pushed seven of their players over to the left side of the pitch, which in turn forces Juventus over to one side in their 4-4-2 mid-block to close down the spaces.

By doing so, it left a lot of space on the ball-far side for Lazio to switch to the opposite wingback in order to catch Juventus out by putting a cross into the box before they had time to shift their defensive block over to the opposite side.

However, as stated previously, these numerical overloads were not only used to create an underload on the far side of the pitch. They were also used to try and break Pirlo’s side’s defensive line on the flanks. This led to the equalising goal in the dying seconds of the game for Inzaghi’s men. 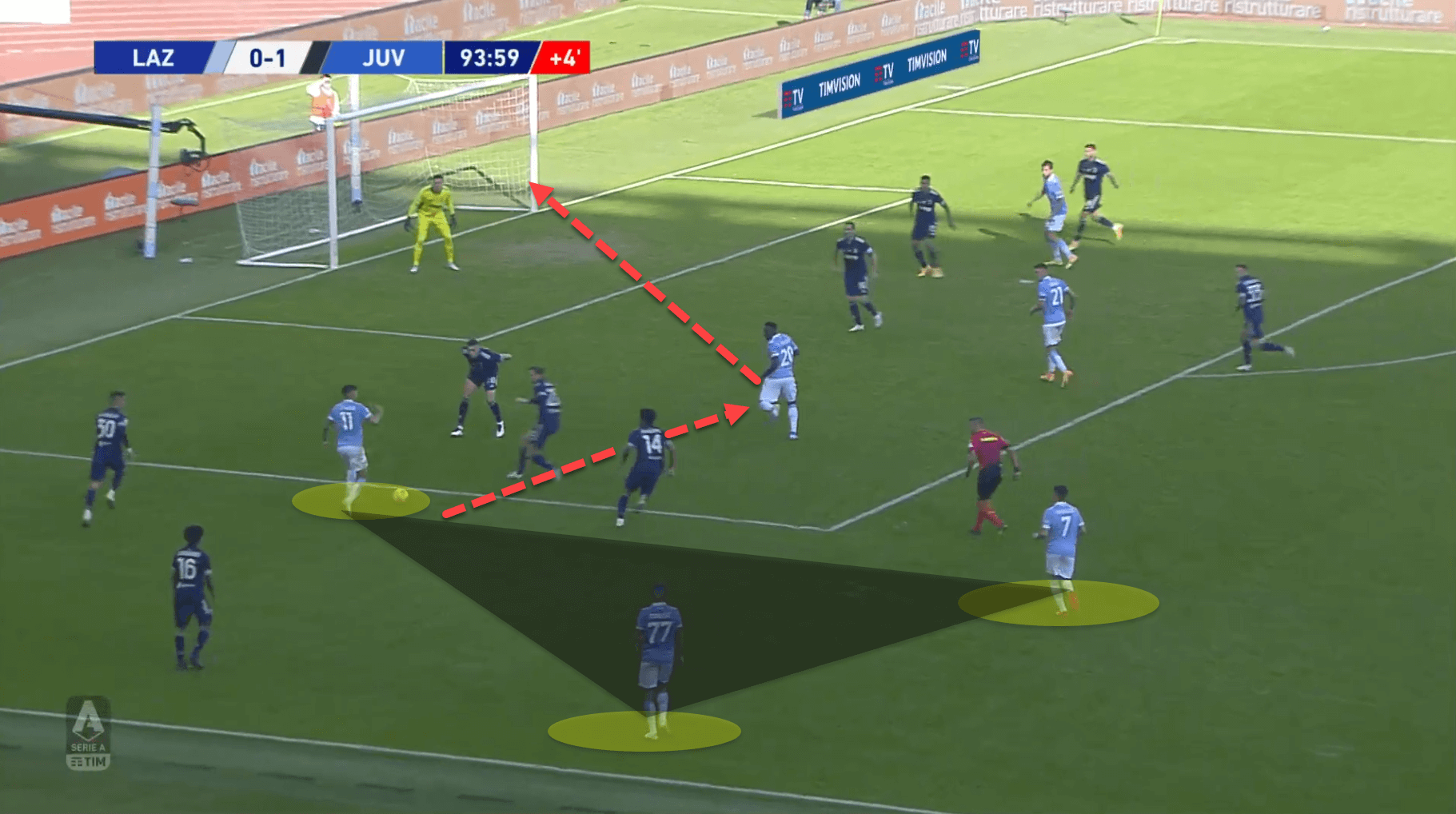 Moments before the equaliser was scored by Felipe Caicedo, rescuing a point for Lazio, they created an effective triangle on the flank with Andreas Pereira, Marusic, and Correa. With quick, incisive passing, Lazio broke through Juventus’ backline alongside a moment of individual magic from Correa, before playing into Caicedo’s feet, in which he slotted home from inside the box.

Pirlo must take massive blame for this failure to deal with the overloads as he did not tweak the formation when Lazio were in the final third. Perhaps dropping Frambotta into a back five whilst his side were defending at the edge of the box would have allowed Juventus to have a man over to stop the overload.

Simone Inzaghi’s side are an extremely difficult team to face, particularly when they are at home in the Stadio Olimpico, so a draw here prior to the game would not have been the worst result in the world for The Old Lady. However, in the grand scheme of things, having been ahead in the game from the fifteenth minute right up until the 95th minute, Pirlo’s men will be extremely disappointed not to have held on for three massive points.

The result only adds to the criticism that the new manager is receiving due to his team’s inconsistency in all competitions, despite inheriting a league title-winning side.

Lazio on the other hand will be delighted to pull out a last-gasp goal in what was an expectedly very tactical affair between two young managers and two excellent teams on paper.