The second round of the Italian Serie A offered some exciting games, including the derby between Roma and Juventus. What was expected to be an interesting meeting turned out as an intense tactical battle between the two coaches, that started awfully for Juventus and ended up in a disappointment for Roma.

The 2-2 end result doesn’t reflect the real efforts that the players put on the pitch but seems like a fair ending to a game full of ups and downs for both teams.

It took quite some time for the new coach Andrea Pirlo to set-up his team and adjust to the Giallorossi’s intense pressing strategy but once Juventus got used to their approach they slowly but surely made their way through and gained back confidence.

Two handballs resulted in penalties for each team, which the regular penalty takers Jordan Veretout and Cristiano Ronaldo converted into goals without hesitations while their second goals came as a reflection of the teams’ repeating mistakes throughout the game.

In this tactical analysis, we will examine both teams’ approaches and how Paulo Fonseca’s tactics caught the Bianconeri by surprise. We will also see how Pirlo’s half-time analysis helped in boosting Juventus’ performance and what changed in their actions in order to get the one point. 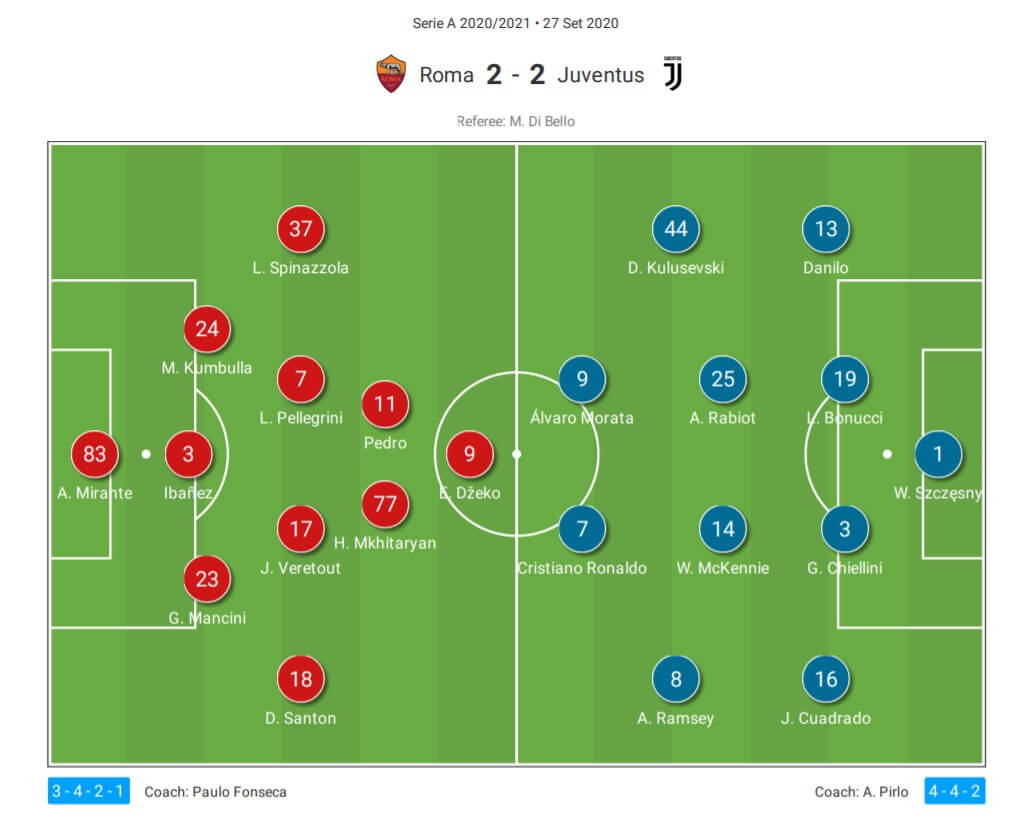 Fonseca set-up his team in a 3-4-2-1 formation in possession with Antonio Mirante on the goal behind a three-man defensive line of Gianluca Mancini, Ibañez, and Marash Kumbulla. The central midfield consisted of Lorenzo Pellegrini and Jordan Veretout, while the wide areas were covered by Davide Santon and Leonardo Spinazzola.

This time Roma’s attack looked differently than their first fixture against Hellas Verona, with Edin Džeko being back in the starting XI being supported by Pedro, who just joined from Chelsea, and Henrikh Mkhitaryan from behind.

Out of possession, the team were dropping in more of a 5-4-1 formation, limiting the spaces between the lines and blocking Juventus’ efforts on the ball in every possible way.

On the other side, the Bianconeri didn’t seem that structured and Pirlo’s formation choice (4-4-2 on paper) faded away in their efforts to bypass Roma’s press.

In front of a very active in the build-up Wojciech Szczęsny, the coach relied on Juan Cuadrado deployed as a left-back and Danilo playing on the right. The centre pairing consisted of the experienced Giorgio Chiellini and Leonardo Bonucci. This structure was changed early on due to Juventus’ difficulties in the build-up, switching to more of a back three with Cuadrado joining his teammates in the more advanced areas.

The midfield line included the new signing Weston McKennie and Adrien Rabiot, flanged by Aaron Ramsey and Dejan Kulusevski. In the centre of the attack, Pirlo relied on Cristiano Ronaldo and Álvaro Morata.

After the first adjusting minutes in the game, Roma started to look more aggressive. Despite Juventus’ having more of the ball it didn’t look like they have the advantage thanks to Roma’s intense pressing strategy.

While the Bianconeri were trying to find their way through, building up from the back, the opposition were extremely focused in their pressing efforts. This got Juventus stuck in midfield and forced them to send the ball back quite frequently in order to escape the press. By employing a man-to-man marking strategy Roma managed to limit Juve’s space for movement and blocked their efforts to advance the ball.

Pirlo’s side found it hard to adjust to Roma’s aggressiveness and it took some time until they structure better. Due to their opponents’ tight coverage and high pressing, they were forced to commit more bodies in the advanced areas, while playing with a back-three in possession. This way they had more chances to open the passing lanes and build-up successfully.

Juan Cuadrado who was employed as a left-back, something that is not typical for him, joined his teammates further. Meanwhile, Danilo stayed deeper providing more coverage, although he would go up higher every time Roma released their press a little.

This saw the goalkeeper Szczęsny play in an interesting role as a main man in the build-up. He would go out of his zone and join the central defenders in efforts to support them and play the ball out, giving the team more time to set in a more advanced position.

This was very risky though since Juventus were the team to lose the ball more frequently in the first half, which combined with Roma’s high press, could’ve caught Juventus by surprise multiple times.

As mentioned, Juventus were lost in their set-up and didn’t have a clear approach since the beginning. They found it hard to adjust to Roma’s tactical superiority and even though they switched their formation to match the opposition’s structure, they still had difficulties in executing their attacks properly but most importantly to defend successfully.

Moving the full-backs higher was an effort to provide more width and try to bypass the press, but they would often fail to pass through the midfield area again, despite Kulusevski’s efforts on the flank.

Rabiot and McKennie were in charge of blocking Pedro and Mkhitaryan’s creativeness which affected their contribution to the attacking actions since they found it hard to split responsibilities, especially when being constantly pressed in the way Roma did.

Since Roma troubled Juventus’ build-up and it was hard for the Bianconeri to improve their connections, the team was forced to switch to a direct play and look for long balls behind the defence. Of course, they often aimed to find Kulusevski who could equally well be a direct threat and also cross the ball successfully to Ronaldo.

That’s when the champions started to break through the opposition’s press and create better chances.

Roma also tried to build-up from the back whenever they had the chance, but Juve’s experience in pressing high and forcing the opposition into losing the ball made it challenging. Despite that, the centre defenders executed their ball-playing duties very well and managed to build a connection with the centre-midfield pairing.

Kumbulla’s movement allowed more freedom to the other right-sided players, but despite that, their real chances didn’t come from positional attacks.

The team were constantly aiming to gain back possession and recover the ball in midfield in order to immediately start counter-attacking actions. They were focused on keeping bodies in the opposition half so that they have options once they catch Juventus on a counter. What made them successful in their efforts was their pace that turned out impossible to match and the Juve defenders were constantly caught out of position.

What made it even more difficult to defend these attacks is the positioning of Danilo and Cuadrado. Not only they were constantly late in their movement, but staying closer to Bonucci and Chiellini, in efforts to cover the central areas, left a lot of space in the wide areas, which Roma didn’t hesitate to exploit. They ended up completing five counter-attacks and scoring their second goal after a brilliant team counter-attacking effort.

Once they saw Juventus’ vulnerability the Giallorossi started relying on long balls in order to catch them off guard. It is safe to say that a lot of their efforts were successful due to the defenders’ unmeasured movement. The problem of Cuadrado’s lack of defensive awareness is still on the agenda, and using him in a full-back/wing-back position is definitely not beneficial for the team. The reason for them not conceding more goals is only the lack of good finishing efforts from Roma.

Mkhitaryan and Pedro were both extremely focused and it seemed like the potential of this attacking-midfield duo is high.

Luckily, the Bianconeri seemed more confident going into the second half, which combined with Roma’s decreased energy levels and efforts on the ball, allowed them to create more opportunities.

It seems like Juventus were most dangerous had they the opportunity to cross the ball. While Roma were covering their opponents tightly, they often struggled with their actions in the box. Limiting the spaces between the lines managed to stop Juve’s central efforts, but the hosts had difficulties every time should they have to defend a cross.

Most of Juventus’ efforts came from the right thanks to Danilo and Kulusevski and it was exactly the Brazillian who assisted for Ronaldo’s equaliser.

Despite going down to 10 men in the second half after Rabiot saw red, the Old Lady looked way better than at the beginning. Pirlo made some needed changes after a mediocre performance by Ramsey and McKennie, bringing in Rodrigo Bentancur and Arthur, who made his debut for the team. This brought more balance and allowed them more freedom, which resulted in the attack for the goal.

Although it is early to judge him, Pirlo needs to find a solution to the uncertainty. He allowed to be outwitted tactically and should improve on his in-game reactions. Fonseca on the other side seems like he finally built a well-balanced team with a defence who can perform solid enough to allow the attacking players more freedom in their actions.

Both teams have a lot of potential should they focus on improving their little flaws.