Cádiz came into this tie having not lost a single point on the road this season, pushing them into the top half and even the European places. Meanwhile, Atlético Madrid had their own ambitions as they knew that a win would leave them top of La Liga overnight, ahead of Barcelona and Real Madrid who have both struggled early on this season.

João Félix was the star of the show again for Los Colchoneros, opening the scoring with a header from a Marcos Llorente cross after just eight minutes. Llorente then turned to goalscorer to double the lead, while Luis Suárez would have a goal reviewed by VAR and allowed after initially being ruled out, with Félix scoring a second in injury time of the second half to seal a 4-0 win.

This tactical analysis will consider the tactics of both Atlético Madrid and Cádiz in an analysis of how they performed at the Estadio Wanda Metropolitano. It will use the analysis to determine how Diego Simeone’s side beat Álvaro Cervera’s team in the La Liga fixture. 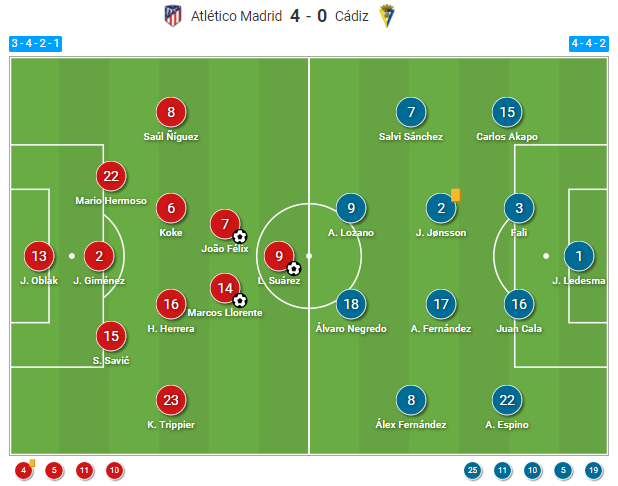 Simeone opted to bring in Mario Hermoso at left-back, ahead of Renan Lodi, while Koke also took up his usual spot in midfield, with Ángel Correa dropping to the bench. Correa would play a vital role from the bench later on, while Geoffrey Kondogbia also came off the bench to make his debut.

Cádiz made just one change to the side who beat Eibar last time out, bringing in former Atleti midfielder Augusto Fernández into central midfield. He replaced captain José Mari, who was taken off against Eibar with an injury and is not yet ready to return.

Atlético Madrid have shown this season that the greatest difference between this season and campaigns in recent years is in their tactical flexibility. This was on show more than ever before against Cádiz, with Hermoso continuing to play an essential role in the set-up. When defending and out of possession, the team would drop into a 4-4-2, or 4-4-1-1, shape with Hermoso on the left and Kieran Trippier on the right, either side of the Atlético Madrid central defensive pairing. This flat back four would form part of two defensive blocks, with Félix providing a higher press in front of them and Suárez ready to pounce on any clearances.

In this shape, we see how two central players, usually Héctor Herrera and Koke, drop into deeper positions, with Llorente and Saúl taking up the wide areas. The option to have this flexibility and allow Hermoso and Llorente to drop wide and deeper is essential to Atlético’s new system. Only by taking this approach can they adapt and adjust to the needs and demands of the game.

When on the ball, however, the shape would be more like a 3-4-3. As can be seen below, Hermoso would drop inside to a central role on the left of the back three, allowing Trippier to move up. In turn, Llorente pushes forward to join the front three by combining with Félix and Suárez. This provides more movement in attack with Llorente and Suárez pulling the defence apart, with Félix coming in behind to poach on any spaces that open up.

Such an asymmetrical system has long been part of Simeone’s repertoire but rarely has it evoked such a significant change in shape. In the past, it has always been a 4-4-2 with one side being more offensive in midfield, but now it has taken on a whole new dimension. The challenge for Simeone with this system is how he incorporates his players into it. It is ready-built for Llorente and, to a certain extent, Correa, but is less well-suited at present to the likes of Vitolo and Thomas Lemar, who have struggled with the amount of ground that has to be covered to fulfil it and execute the role as is required.

This game was decided in just the eighth minute of action. A poor goalkeeping error from Jeremías Ledesma saw him spill the ball with Llorente crossing to Félix to head in at the far post. That immediately ruined Cádiz’s game plan, as they had executed so well in their past three away games against Athletic Club, Real Madrid and Eibar. Those games were won, all of them to nil and with solid defensive approaches. As soon as that clean sheet was taken away from them, and Cádiz had to chase a goal, their discipline was lost.

In this image above, we can see how Cádiz were forced to push higher up the field. This press from the midfield and defence had to be far more active and engaging, no longer sufficient to sit back into a low block. The result was that, particularly as defenders stepped up, spaces opened up in behind them. The likes of Suárez and Llorente are experts at identifying these spaces and exploiting them, with Koke, Saúl, Herrera, Félix and Correa looking to pick out those runs as soon as they happened. This example specifically points to Suárez’s late dash as the central defender steps up as he initially drops deep to collect the ball before turning.

As can be seen in this second image, against Real Madrid in their 1-0 win just a few weeks ago, Cádiz’s positional lines were much deeper. This reduces such spaces and makes it harder for teams to capitalise. Without space in behind, teams grow frustrated and struggle to create chances. In this case, Atlético certainly had no difficulty in opening up new opportunities thanks to the gaps that were opening up in the defence. It reflected how Cádiz struggled, opting to chase the game to equalise and in doing so, inflicted greater damage upon themselves.

The other way in which Cádiz failed at the Estadio Wanda Metropolitano came in how Atlético organised defensively. Cádiz stuck to their front two of Anthony Lozano and Álvaro Negredo, which has worked well in the past, with one operating as a target man with Lozano then looking to pick up on the ball. This largely resorted to long balls and punting the ball forward to Negredo. Atleti detected this and would look to cut out that opportunity, with both Koke and Herrera dropping deep at every long ball, with José María Giménez sticking to Negredo and engaging in a real physical battle. No-one passed the ball to Negredo more than Ledesma in goal, but only one of the five passes was completed.

Negredo became more and more isolated and frustrated as the game went on. Initially, he began to drift over towards Stefan Savić, hoping for more success on that side of the defence. But when it was really visible was as the ball moved forwards. While Negredo would usually stick to fairly central positions and hang on the last shoulder, we could increasingly see him look to pull off to the far post and then attack the space between Giménez and Savić at the last possible opportunity.

Against less organised opposition and with the accuracy of Salvi Sánchez’s crossing, it may have worked. Atlético defended well, with Trippier dropping in to take up his position and follow Negredo’s run. With Trippier, Savić and Giménez all tracking his runs with support from midfield, there was simply no way for Cádiz to find a way through. Having recorded just 0.47 xG, it almost entirely came from set-pieces, with Negredo and Lozano only recording their first attempt as a striker partnership in the 87th minute. That reflected just how well Atlético defended and how Cádiz failed to adapt their approach.

What was evident in this tie was the way in which the flexibility and adaptability of the two teams came to define the match. The early goal automatically meant that both teams would have to react in order to come out on top and take advantage, and it was immediately clear that the next goal would be crucial. Cádiz gambled on a more offensive approach, and it backfired with Llorente capitalising on the extended space to double Atleti’s lead.

Cádiz failed to adapt their game plan, opening up defensively without a clear attacking strategy beyond long passes forward to the target man. Atlético found this easy to defend against, and could quickly alter their own shape in order to be more clinical on the counter and attack. This versatility from Simeone and his team was what set them apart and proved that they can now kill teams off, unlike last season where the same, stale, repeated tactics failed to break teams down.

In Cádiz, Atlético will not face many sides who are as tough to break down. That much has already been proven as they have shut out the likes of Real Madrid. The Rojiblancos had a slice of luck in that Ledesma produced by far his worst and most error-prone display of the campaign. Still, they took advantage to produce an excellent display relying on their flexibility, particularly in wide areas, to drag Cádiz’s players all over the pitch and generate spaces. Should Atleti continue to exploit teams in this way throughout the season, they could prove to be very worthy title contenders.