History was made on Saturday night as for the first time in 91 years of history, the reigning champion and league leader lost to a newly promoted side as Cadiz beat Real Madrid. Los Blancos rested several key players after the international break and were shown up by Cádiz’s impressive display.

Cádiz secured their third away win of the season from three games thanks to Choco Lozano’s strike early on in the first-half and they were unfortunate not to have doubled, or possibly even trebled, their lead. They frustrated Real Madrid, wearing pink to recognise Breast Cancer Awareness Day, to hold out and secure the victory.

This tactical analysis will provide analysis of the tactics of Real Madrid and Cádiz to understand how Álvaro Cervera overcame Zinedine Zidane’s team to end the matchday in fifth and on the same number of points as Real Madrid in La Liga. 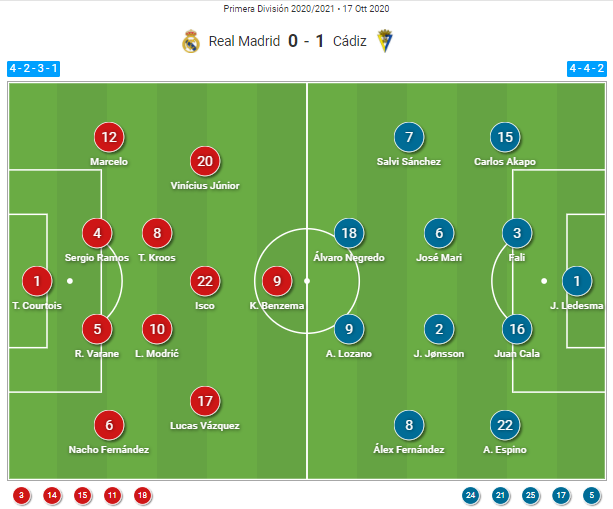 Zidane selected an unusually offensive line-up to face Cádiz, with Isco coming into the side to replace Casemiro in the same shape that saw Martin Ødegaard start against Real Sociedad earlier in the season, though injury ruled him out of this one. Nacho continued at right-back while Toni Kroos returned to take Fede Valverde’s place after an injury lay-off and Lucas Vázquez started ahead of Marcos Asensio.

Cádiz benefitted from the return of duo Álvaro Negredo and Carlos Akapo who had been suspended for the draw with Granada, though Marcos Mauro was injured and replaced by Fali. Pombo was also dropped to make way for Negredo, with Salvi Sánchez moving to a role on the wide right, alternating with Lozano.

Cádiz recorded 2.75 xG, an incredible 83.3% of which came in the first half. The last time a side scored such a high xG figure against Real Madrid in La Liga was when Barcelona dismantled them in the 5-1 Clásico thrashing in October 2018 under Julen Lopetegui. Only Barcelona and Manchester City have ever recorded a higher figure against Los Blancos with Zinedine Zidane in charge, and the last time a Spanish side not named Barcelona did so, it was Atlético Madrid in October 2015.

What is so interesting about this is that this high xG came from such a low number of shots, with just 12 attempts on goal, averaging at 0.23 xG per shot. Throughout the rest of this season, Cádiz’s average xG per shot has been just 0.1. This clinical approach came through the spaces that Real Madrid afforded to Cádiz, allowing them to create high value chances whenever they got forward, regularly leaving areas wide open for the visitors to counter-attack in numbers with pacey players in wide areas.

This shows how the goal was the perfect example. The Real Madrid defence is stretched with Marcelo having pushed too high up the field without closing down Álex Fernández. Negredo and Locano immediately cotton onto this with Negredo attacking the space between Raphaël Varane and Nacho, with Luka Modrić not tracking back accordingly to track him. Meanwhile, Lozano is seeing that Ramos has stepped up high on the left, and he can pull off to gain a head start. When the ball comes to Negredo and he knocks it down to Lozano, he is already away from Ramos to be able to form a one-on-one situation with Thibaut Courtois which he turns into the winning goal.

If there was one thing that was evidently clear in this tie, it was the defensive structures and organisation of both teams. While Cádiz were highly rigid and structured, Real Madrid’s backline was chaotic and messy, with no clear responsibilities. That is evident in that Cádiz won despite having just 25.5% possession. What’s more, their defensive effort in terms of actually getting stuck in to break up moves was not as substantial as you may expect. In fact, with 62 defensive duels it was only the third highest figure from six games this season. That was owing to their defensive organisation which kept Real Madrid out, rather than needing to put a foot in to break moves down, instead forcing Real Madrid to frustrate themselves.

Cádiz were not afraid to dedicate men in numbers when Real Madrid pushed high in numbers. While their typical defence was built with four men, José Mari and Jens Jønsson were both capable of dropping in to form a back five. With the other man available to drop into a deep role, with the wide midfielder on their side, usually Fernández or Sánchez, also falling in, they could effectively form an almost single-line block of seven players who would spread across to deny any kind of space to Real Madrid. This was crucial to limit the danger of the pace of Los Blancos’ wide players but also to prevent them from cutting inside to take shots from distance.

When Real Madrid were in possession with the ball deeper in the half, They formed a 4-4-2 shape. This was slightly unusual given that they usually stick to a 4-2-3-1 formation, but opted for two men to deny Real Madrid’s defenders quite as much time to play long balls. Dedicating more time to their defensive players passing ability, they formed rigid blocks which denied spaces but prevent the ball from transitioning at speed, serving to generally slow down the pace of the tie and feed into the frustrations of Real Madrid.

Here, we can see how Real Madrid structured their defence. Nacho was selected and is generally seen as a more defensively reliable option on the right, but was often caught out by the speed of Cádiz’s counter-attack. Ramos and Varane were alone in the defensive shape, with Cádiz close to mounting a four-on-two situation. Such a situation may be understandable late on in the game with Real Madrid chasing, but this came after 13 minutes and with the tie level at 0-0. Cádiz were clearly prepared and looked to exploit it through their speed in wide areas.

Any side that enjoyed 74.5% possession and generates just 0.92 xG clearly lacks cutting edge. In the case of Real Madrid, this is a season-long concern which was more grave than ever before against Cádiz. Cádiz were happy to allow them to play and to stick to being defensively solid with a system that worked, as we have already seen in this analysis, but given the gulf in quality, Real Madrid would usually still be expected to have made a difference.

A key element of this was the dependence on Kroos. Returning after a spell on the sidelines with injury, he dictated play throughout much of the tie until being replaced by Luka Jović. Sitting in the same position in a deeper role, he would act as a quarter-back looking to spot openings in the Cádiz defensive line. By allowing Cádiz to sit deep in such a low block and in such numbers, with at least 10 men behind the ball at most times, Real Madrid were already overcrowding a packed final third and could not create space, making Kroos’ task a difficult one.

Later on, Zidane looked to react by trying to draw out Cádiz. With full-backs positioned deeper, and Marcos Asensio and Vinícius Júnior not advancing so far forward until a pass was played in, they looked to invite the Andalusian team out to then generate space which they could attack with a sucker punch. The problem came in that Real Madrid lacked the energy or movement to do so, while Cádiz doubled down in the wide areas where that energy did exist.

Zidane’s evident lack of options, resorting to throwing on Jović having swapped Valverde and Asensio for Isco and Modrić, reflected the lack of creativity in the team. By making four substitutions at the break, one enforced as Ramos was taken off with a knee complaint, Zidane also made his job harder. While he may have expected an immediate impact, it left him with little choice as the tie wore on without an equaliser and as Cádiz grew more tired. Jović was not the impact sub that could be deadly against tired legs that someone like Rodrygo Goes may have been, and instead only served to add to the central congestion which was already congesting Real Madrid’s attack.

Much of the post-match analysis and talk of Real Madrid’s defeat to Cádiz will focus upon how poor Real Madrid were. Defensively sloppy and lacking any kind of structure of discipline, they were easily shown up by Cádiz, whose counter-attacking game plan worked well. Without an incisive presence in attack, relying on a defence-splitting pass from a rusty Kroos and with little movement ahead of him, Real Madrid never looked likely to come out on top. With a Clásico against Barcelona coming up next for Real Madrid, there is work to do.

However, the real takeaway from this game must be to give a huge amount of credit to Cádiz. Cervera set up his team excellently, prepared to dig in and build a rigid defensive system, but also able to hit Real Madrid on the counter in wide areas when poor defensive organisation allowed them to. Allowing Real Madrid to play and frustrating them worked into his favour, with Cádiz able to execute their game plan to perfection and only driving the lack of incision from Real Madrid. Such tactical masterclasses are rarely seen at the home of Real Madrid, but in the case of Cádiz, it was executed perfectly.