The season has begun and all the teams have played a minimum of three matches, so there’s a lot of excitement in the air. Cádiz CF, SD Huesca and Elche CF are the three promoted teams and have so far performed reasonably well. Since a La Liga follower would certainly have no idea about these two teams, in this tactical analysis we will perform an analysis on Cádiz and analyse their tactics, their transitions and much more in form of a scout report.

Cádiz finished second in the Segunda División with just one point less than Huesca, who finished first. They had won 19 of their 42 matches and has lost just 11 of them. But Laliga is a different level of league and they have so far won two and had lost two in their first five games. Cádiz are known for their versatility and ability to change their approach based on their opponents, which significantly makes them one of the teams to look after this season.

First, let us look at their squad to understand the depth they hold before we start analysing their tactical play and how they performed in transitions. 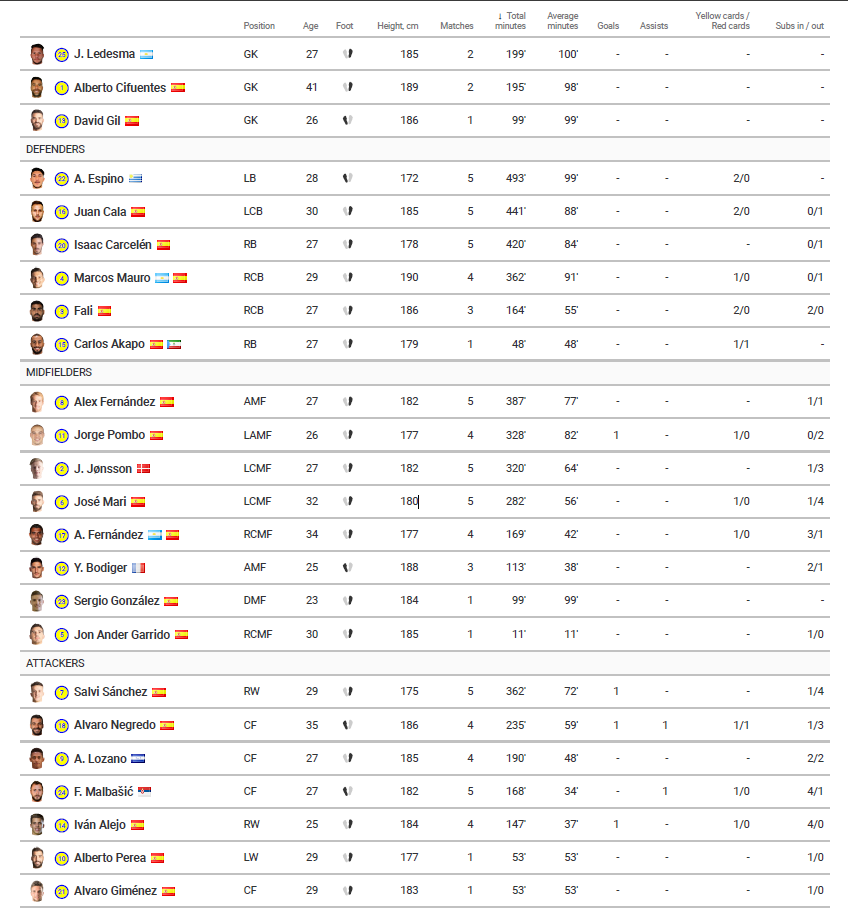 The above is the team list of Cádiz and by the look of it, we can easily say that their squad depth is very good and they have enough players in each position. This enhances the healthy competition within the team, which sees them perform well in every match. The squad consists of 24 players with an average age of  28.62. A lot of their players are at the peak of their powers and are willing to compete.

Upon dividing the age of players into three categories, the below visualisation is what we get. Players aged below 24 belong to the youth phase while playing in between 24 and 29 are in the peak phase. The players aged 30 and above are experienced. 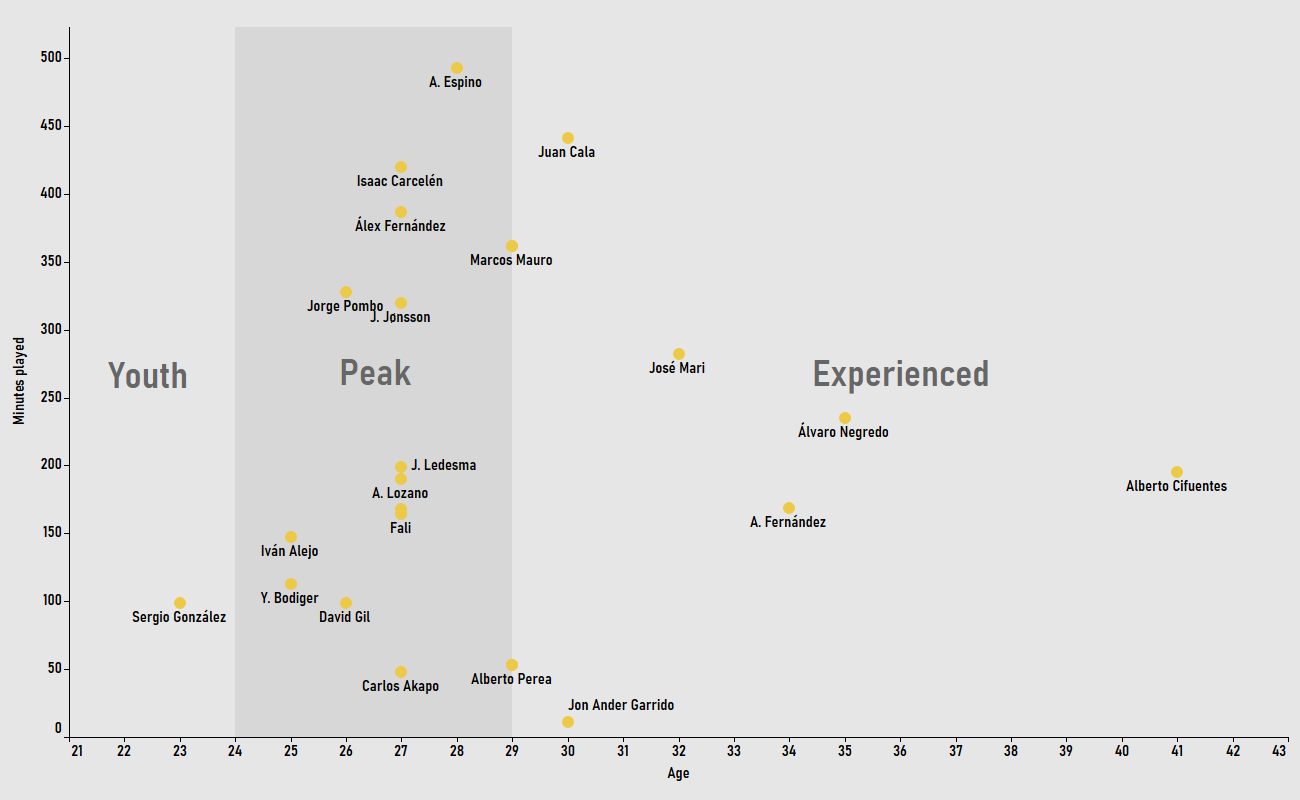 It’s good to see that the majority of their players come under the peak phase radar while only one player is in his youth phase while around six players are there in the experienced phase. This alone explains that the signings they make aren’t temporary but based on a long term goal for which they are preparing their squad wisely.

Previously we did claim that Cádiz are one of the most versatile teams in the LaLiga this season, and the reason for this is their ability to adapt themselves to the opponents. 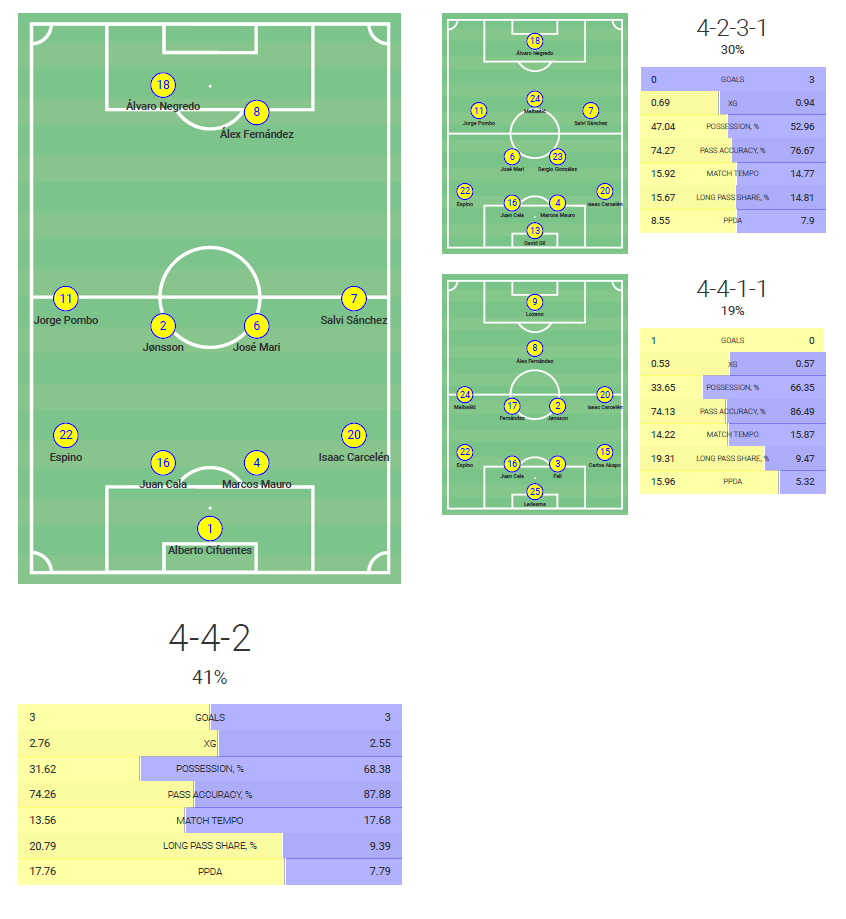 The above is the most preferred lineup and formation of Cádiz and we see how Álvaro Cervera lines up his team. Although it’s a clear that 4-4-2 is his preferred formation, the team has lined up in a 4-2-3-1 formation 30% of the time and 4-4-1-1 19% of times which clearly makes them versatile. The number of experienced players who are in their peak has been a huge plus to the team, as they have an adaptable nature which sees them play in different formations based on their opponent.

Cádiz are a well-organised team who defend in their standard 4-4-2 formation. They adapt to a mid-blocked defence strategy and let the opponent build their play from the back. The real struggle for opponents begins only when they try to pass their middle third. 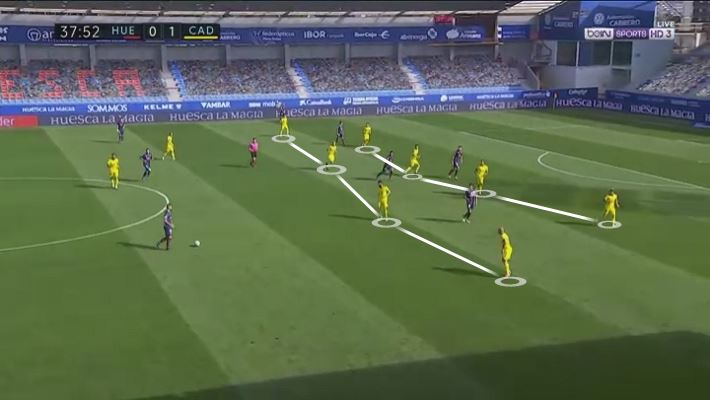 From the above picture, we can see that their defensive shape is a 4-4-2, but something which we have to pay good attention to is the space between the defensive line and midfielders line. They are compact and tightly packed, leaving no space for the opponents to penetrate through. It’s also to be noted that they play a very high backline, indicating how confident they are whilst defending.

But this solid defence is breakable at times. Since they rely on the counters through the flanks, their wing-backs very often move up to combine, leaving a very big void for the attackers to exploit. Their compactness tends to break when opponents play with a higher tempo. This has been one of their major drawbacks and has seen them concede goals on several occasions in their first few matches. 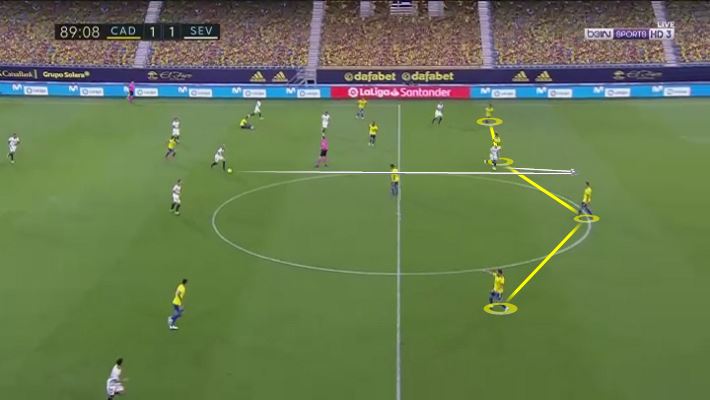 From the above picture, we can see that their positioning has been disturbed and there’s a clear cut void in the centre for the opponents to attack. Since they also play a high line defence, a striker who plays on the shoulder of the centre-back is very dangerous. That’s something they have been struggling to deal with. Especially as their centre-backs are very far apart as we see in the above picture, which is quite concerning. But they still have a lot of time to correct this defensive error of theirs.

In their defensive transitions (when they’ve just lost the ball) they tend to press high with less intensity. The main goal of this press is not to win the ball, but to force them to pass back and give time for their players to get back to their zones after attacking. During this press, they are in a flexible 4-4-2 formation which transforms into a 4-3-3 when the ball is passed on to the flanks. 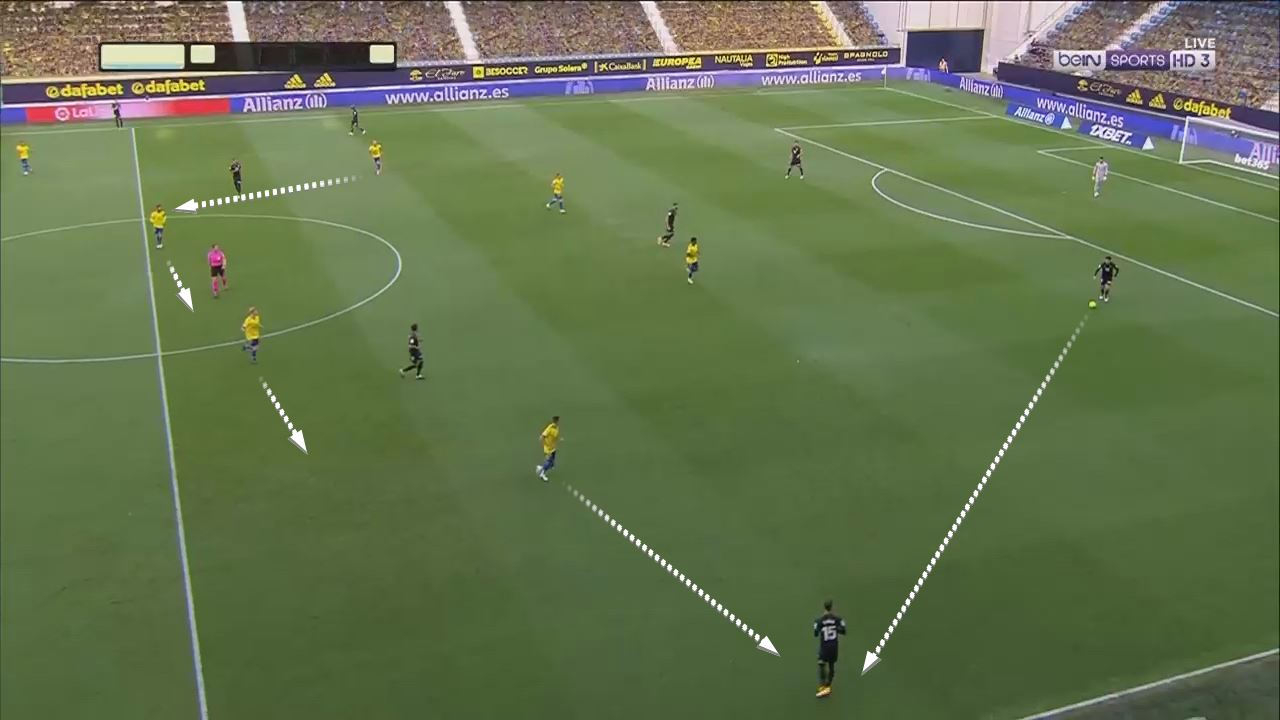 As the team plays from the back, we could see that the winger is ready to anticipate and close down the attacker in the flanks, combining with the front two. Meanwhile, the winger on the other flank drops back to maintain the compactness in the centre. This way of pressing slows down the game and helps Cádiz regain some control over the match. But as the opponents progress, they shift to a complete mid-block 4-4-2 defence which we looked in the previous section. 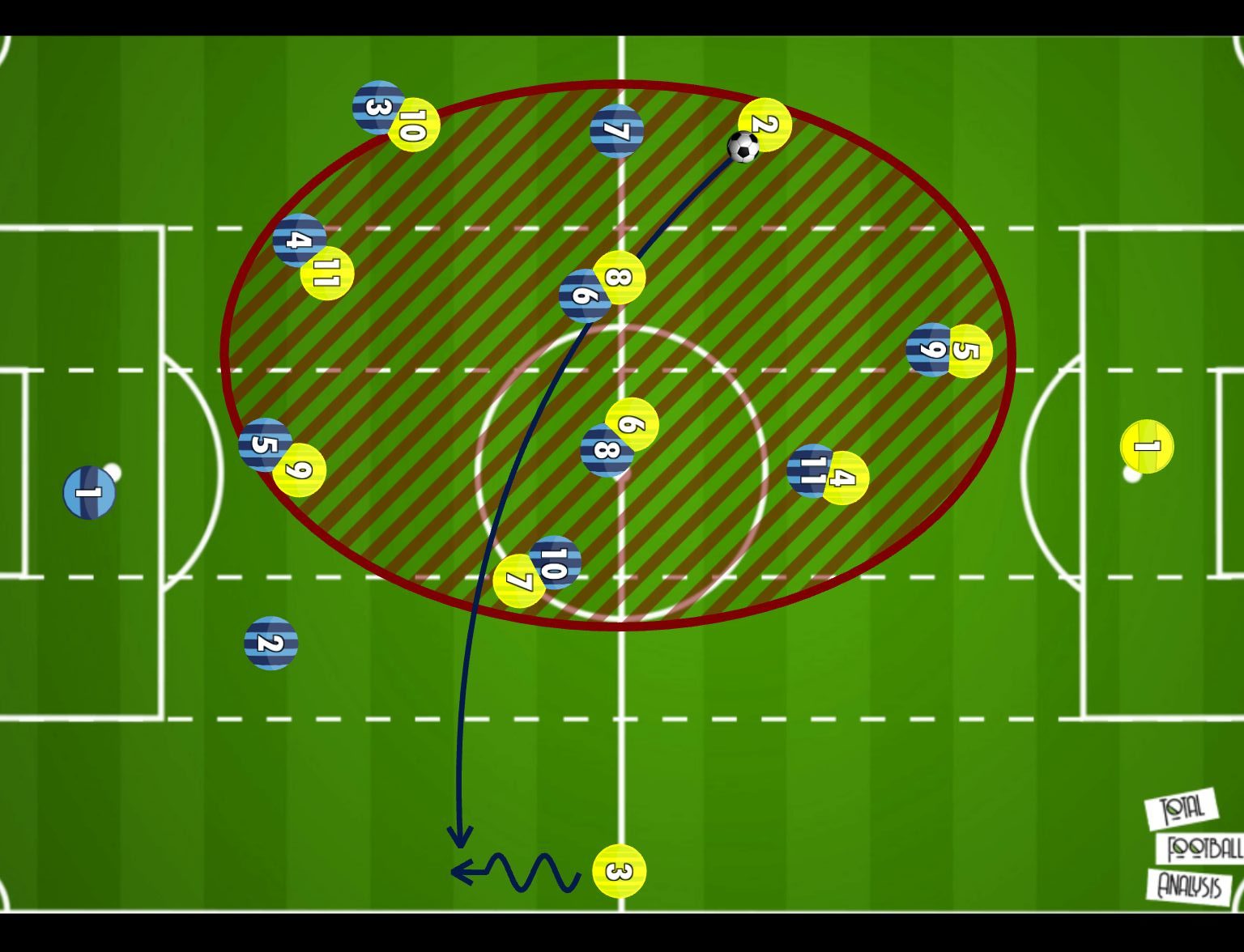 On regaining possession, Cádiz always tend to switch sides through the air, where they have their fullback waiting to receive and accelerate. These type of tactics by them takes the opponent by surprise and by the time the defending team shifts to this flank, the ball receiver is already inside their attacking third waiting to cross the ball. As a result, we could see a majority of Cádiz’s attacking begin or come through the flanks. This is a worrying factor for teams like Barcelona because their flanks are quite often exploited.

Next in this analysis, we will be looking at Cádiz’s build of play and how they attack when in possession of the ball.

Their build-up of play and attacking

Cádiz, unlike the trend, let the goalkeeper kick the ball to the middle third and win the ball there. This has been their frequent way of building up the game from the back. During this, they switch to a 4-2-4 formation, where the central midfielders are ready to win the second ball and pass it on to the wings to attack. 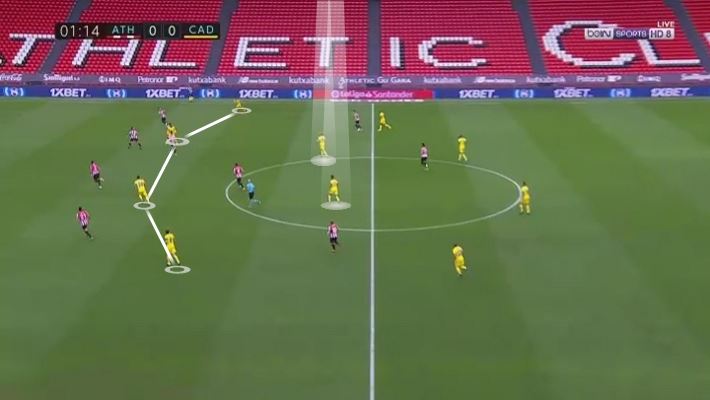 This structure gives them so many options upon receiving the ball. Either the forwards can head it to the centre midfielders, or flick it to the corridors for the wingers to exploit. Even if they lose possession at this stage, the central midfielders are ready to win the second ball. Now they can either pass it to the wingers, or to the empty space in the flanks and make the wing-backs combine in the attack. That’s why the heart of Cádiz’s attack is through the flanks.

Since they have very good dribblers to their side, their penetration through the flank is very effective and quite often ends with a shot. The below plot is a visualisation of Cádiz’s dribbles in the final third. 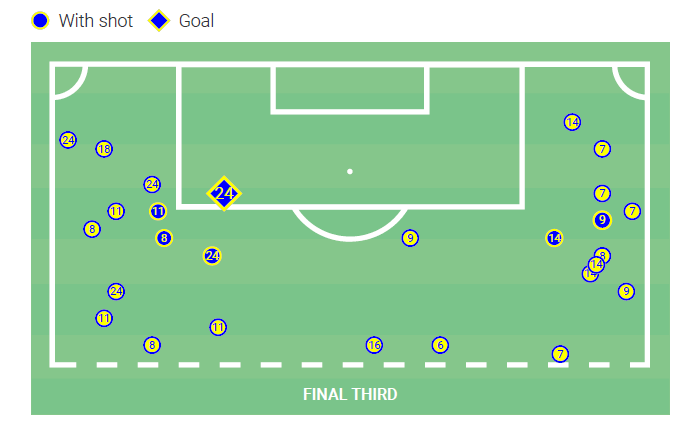 From the above plot, we can easily justify the fact that penetrating through the flanks is their preferred way of attacking. You can also observe the fact that quite a number of dribbles end with a shot. One big advantage Cádiz have is that they have players who can score from long distances.

Upon dribbling the ball in the flanks, the La Liga newcomers like to play plenty of crosses into the box. They have a reputation for being dangerous from crosses and their movement in the box is exceptionally good. 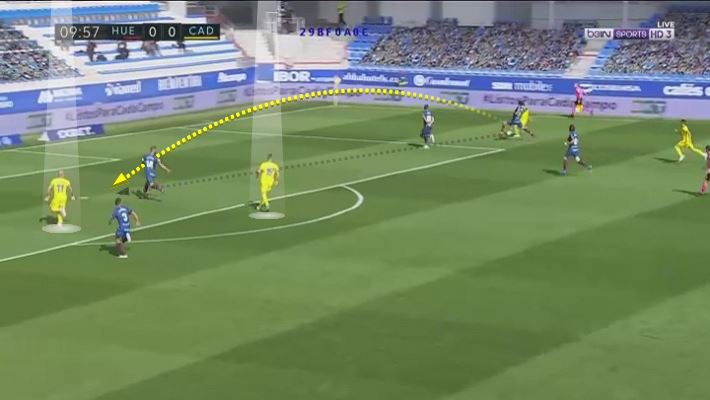 From the above picture we can see that two players sprint to meet the cross and towards the end, one of them withdraws while another still moves further attracting the defenders. At the time of the cross, either the crosser can pass it back to the second striker who withdrew the run or could pass it into the crowd hoping his teammate would meet the ball. If the ball is cleared, then the second striker would be ready to win the second ball. Although they have a goal difference of minus one, this tactic of theirs has been their most efficient way of scoring so far.

Cádiz CF is an exciting team to keep eyes on this season. Their versatility and the depth the hold is their huge boost and they have a never give up attitude which has seen them success on several occasions. The above analysis has provided a general overview of Cádiz. It is based on their frequently occurring traits in this first few matches, and it’s sure that the team can offer more than this. It would really interesting to see how they adapt when they compete against the league giants like Real Madrid, Barcelona etc. In the near future and with more experience, Cádiz would not be able to compete for the LaLiga title, but could also aim for entry to the UEFA Champions League by finishing in the top four. How they develop over time is something only time can answer but its definitely something worth noticing.