In order to strengthen their midfield, Chelsea Women made two important signings during the latest transfer window: Melanie Leupolz and Pernille Harder. This tactical analysis article will aim at exploring these two midfielders‘ main traits and how Chelsea can benefit tactically from both these players. To do this, we will provide a thorough analysis of their strengths and weaknesses based on their recent performances and on statistics as well.

We will start this scout report by focusing on Melanie Leupolz who used to be a Bayern Munich Women player for six seasons. Apart from the fact that she lifted two Bundesliga titles with them, she gained a lot of experience by playing with her team not only locally, but also in the Champions League.

To start with, Leupolz is a player who always looks for vertical passing options and who is usually making these passes accurately to teammates in the final third. And to support this, it is not surprising that her simple pass accuracy is 89.8% while her passes-to-the-box accuracy is 65.9% – both numbers are excellent and showcase her vision and passing skills.

For instance, we can see in this picture how she notices the space behind the defender and gives an accurate through ball to her teammate in a shooting position. Her teammate then scores and it becomes an assist. Another positive feature of this player is her ability to dribble and exclude players in midfield, which happened just before she gave that through pass. 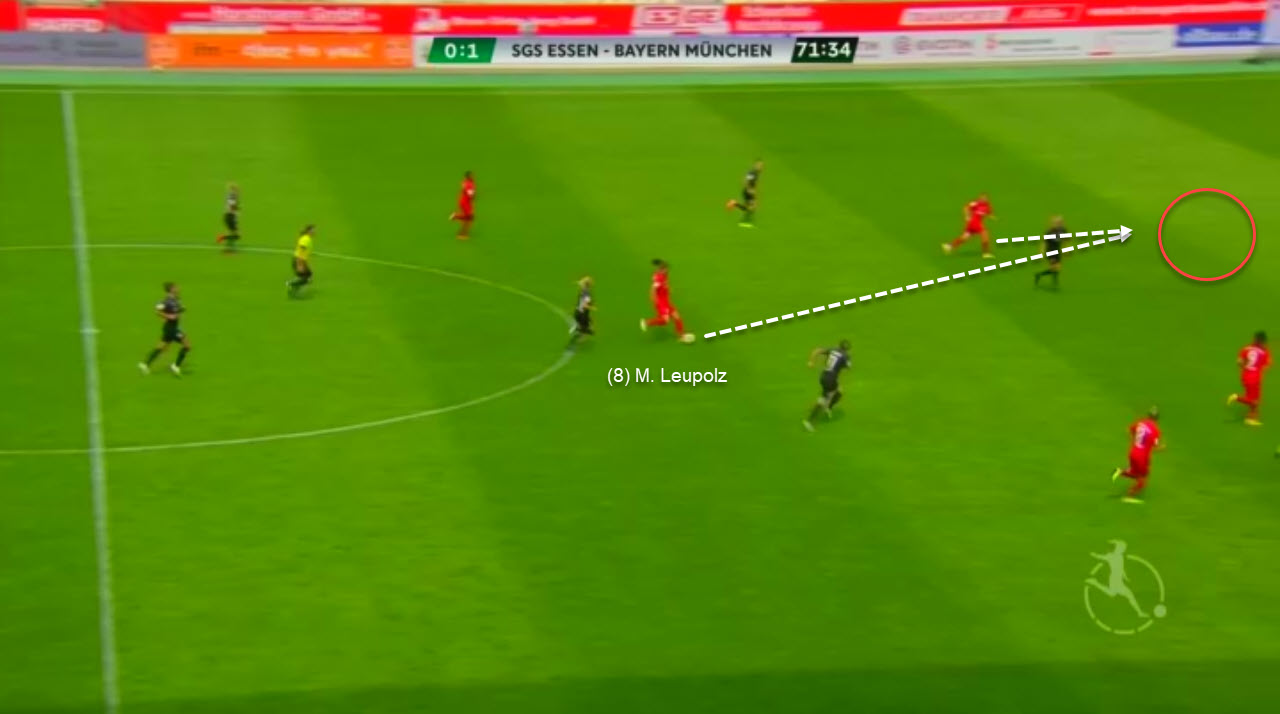 Moreover, Leupolz is a player who relies on accurate long-balls and knows how to use them in the best possible way, which is something not all players can do. Leupolz makes assists with long-balls and often makes the right crossing decisions and at the right time as well. Launching long-balls also depends on accuracy, because if those long-balls are not accurate, they most probably create counter-attacks.

However, Leupolz has a percentage of 84.3% in long-ball accuracy and this in itself tells us how important Leupolz can be in any team’s midfield. You can see how in this attack she saw her teammate not tightly marked and was able to run behind the defender and so she gave her an accurate long-ball at the right place and at the right time. This long-ball created a goal for Bayern and this proves once again this player’s intelligence and technical as well as tactical abilities. 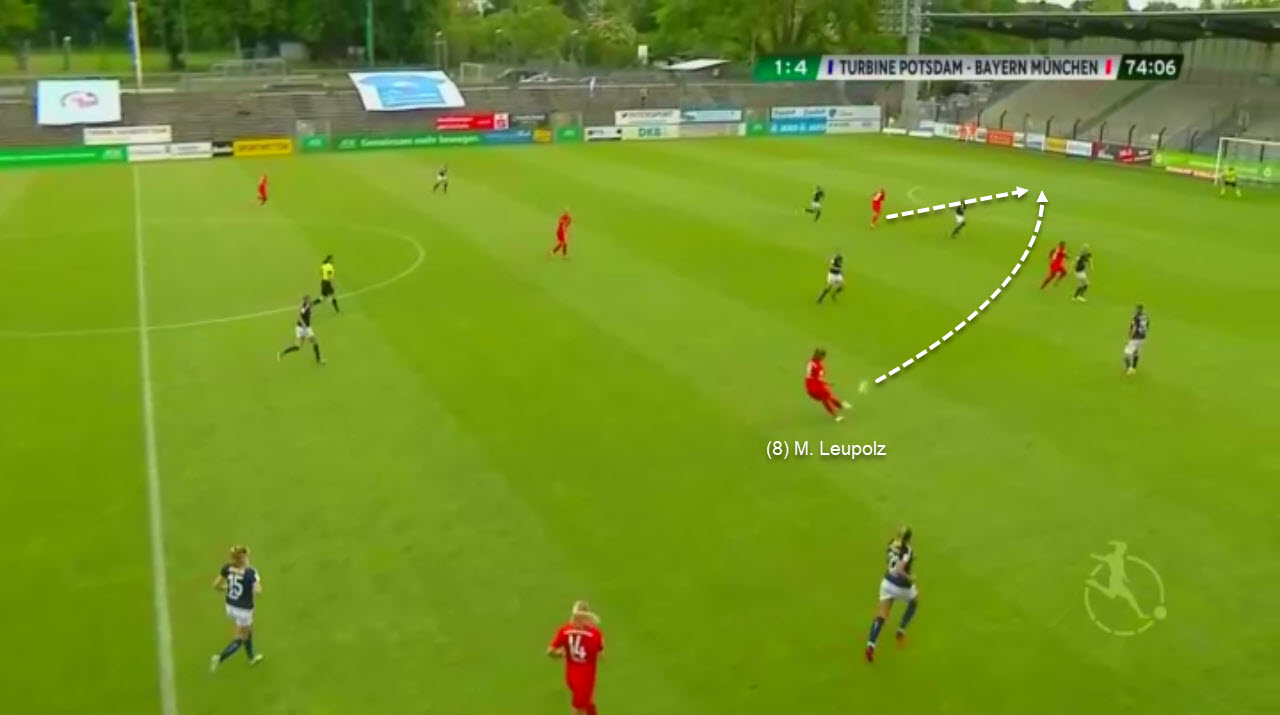 Here again, Leupolz showcases her passing range by crossing the ball from midfield and behind the opponent’s defensive line to the team’s forward who asked for a ball. And the rest is a goal.

The ability to cross the ball at the right time and in the right place as well as the awareness of the surrounding players’ movements and places are all things that not all players take into consideration or succeed in doing. But Leupolz is one of those players who are usually aware of all details, which makes of her an excellent midfielder. 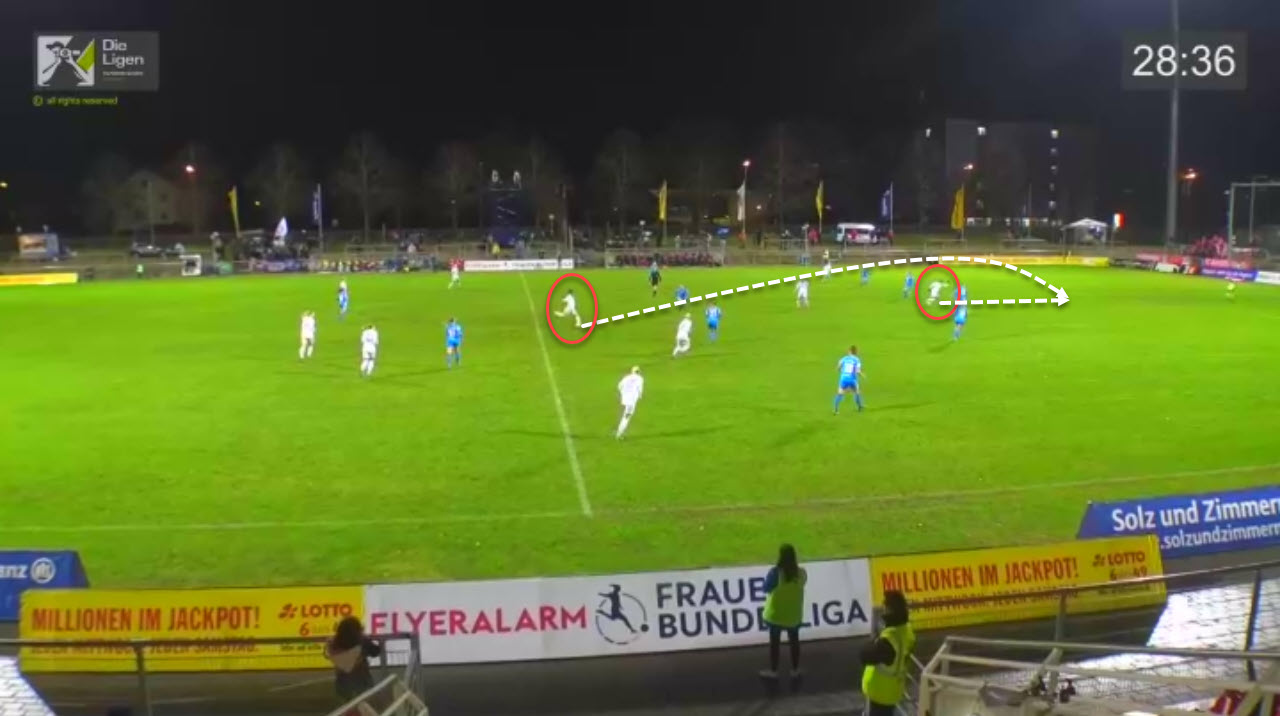 Apart from her ability to serve her teammates with accurate balls, Leupolz not only helps in the build-up play and contributes in the defensive part of the game, but she also goes forward and scores often. She shoots 1.8 times per game and knows how to score goals with different manners, with her head, strong foot, weak foot, and from distinct positions as well.

In this goal, she played as if she were a second striker. She waited for her teammate’s pass, anticipated her direct opponent by moving towards the direction of the ball, ran with it, and scored a goal with her weaker foot. And this is also something that not all midfielders can do.

It is also worth mentioning that Leupolz is good at dribbling with 70.3% one-on-one dribbling won. And she is also very good in aerial duels with 56.3% won, and this helps a lot in winning balls in midfield.

Moving on to Pernille Mosegaard Harder now, this player has already been a star at Linköpings and then at Wolfsburg, the club with which she won the Bundesliga four times and reached the final of the Champions League twice. Last season, she scored 36 goals for her previous team Wolfsburg and was really a captain and a leader for them. So let’s look at this player with more attention to identify her main skills.

First of all, what is striking with Harder is her ability to play in different positions without deterioration in performance. She has experience playing as a second striker, advanced playmaker, striker, and she can also play on the wings if she is asked to.

She is a penalty specialist and obviously an excellent goalscorer who can score in different ways and knows how to move inside the box to not fall in the trap of offside and to anticipate defenders’ movements as well. These things are important for every striker and Harder has got no problem in this, she scores with headers, with a first-touch, with both feet and from different positions.

And it is very important to see how in this goal, for example, she was marked by a defender and when she knew that her teammate was waiting for someone to escape from marking, she went backwards in a second. She then received a pass while she was free from the marking and scored. And movements like these, as well as the right timing, are what make the difference between great players and average ones. 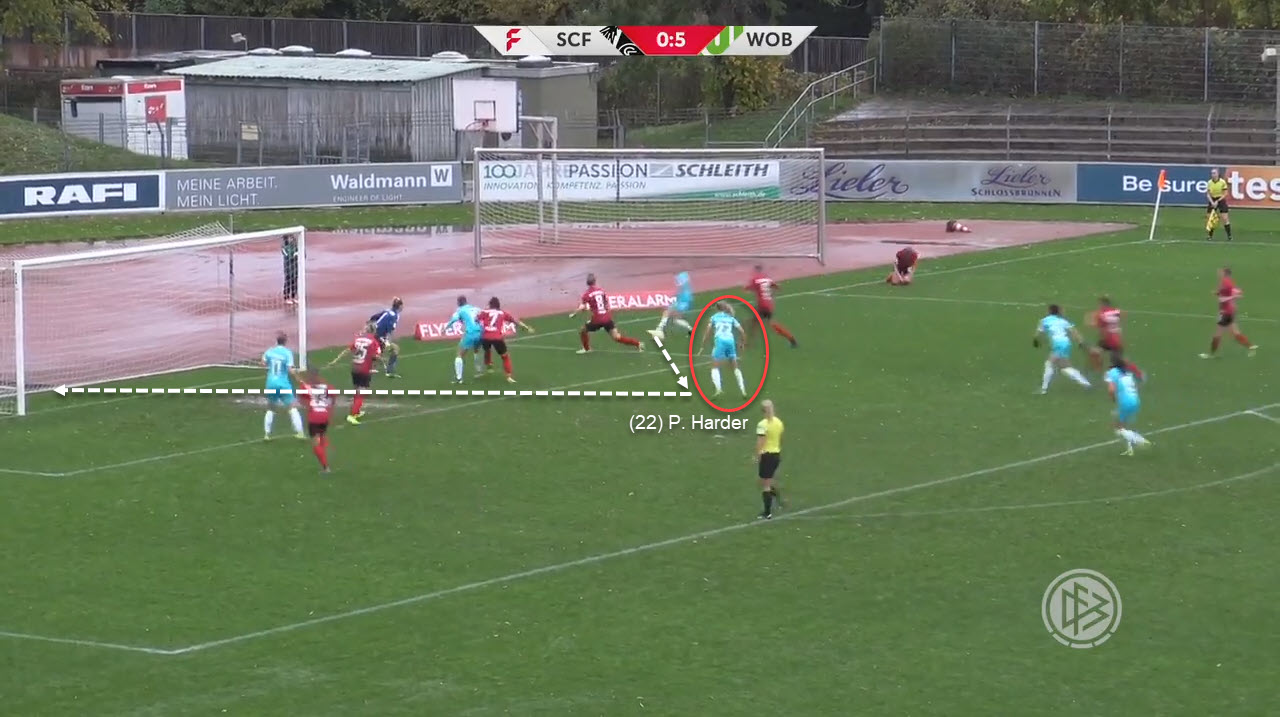 Apart from this type of goals, Harder scored plenty of other goals and perhaps the ones that deserve much more credit are the ones scored with her weaker foot. Harder scored plenty of those, and even when she did not succeed in scoring, she has often dribbled when she happened to be on the right before cutting inside and shooting with her weaker foot without fear but with power and precision.

This action happens a lot and Harder usually surprises goalkeepers by shooting with her left-foot, especially when she does that when she doesn’t look like intending to shoot. This recurrent action enabled Harder to score many important goals, especially in the Champions League like this one against Glasgow City. And she most probably will continue to score goals like these for Chelsea as well. 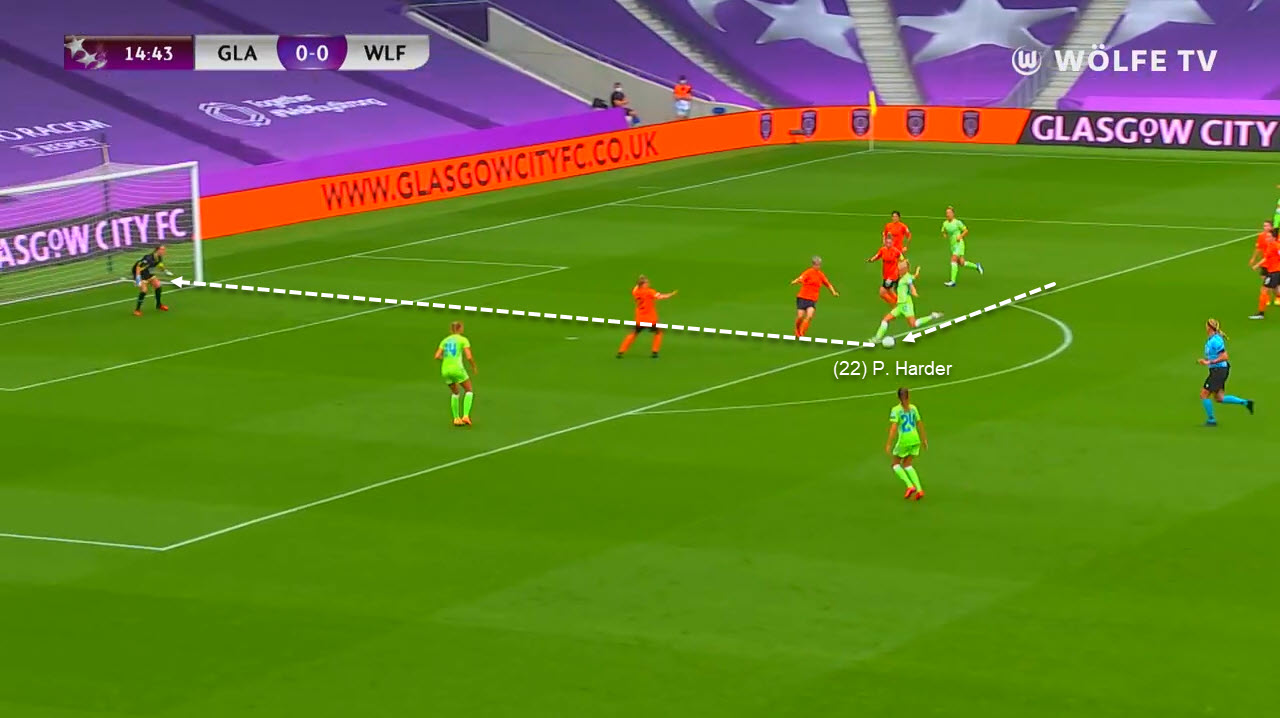 Apart from goalscoring, Harder links the midfield to attack whenever she wants or when she is asked to. She has the agility and dribbling skills needed to get past opponents and more importantly, she often makes the right choices and knows when to pass the ball without exaggerating her dribbling like many players do. This makes Harder even more valuable to teams that struggle in attack and in making the ball reach forward.

In this action against Chelsea, Harder dribbles past her opponent and continues her running to force two other players to face her. And in that second, she decides to pass the ball to her teammate who was free on her right, making three Chelsea players marking her, and leaving the player who received the ball in a one-on-one situation with the goalkeeper. Therefore, Harder was able to destroy Chelsea’s midfield and give an assist in one single action and this in itself proves how this player can be very dangerous to any defence. 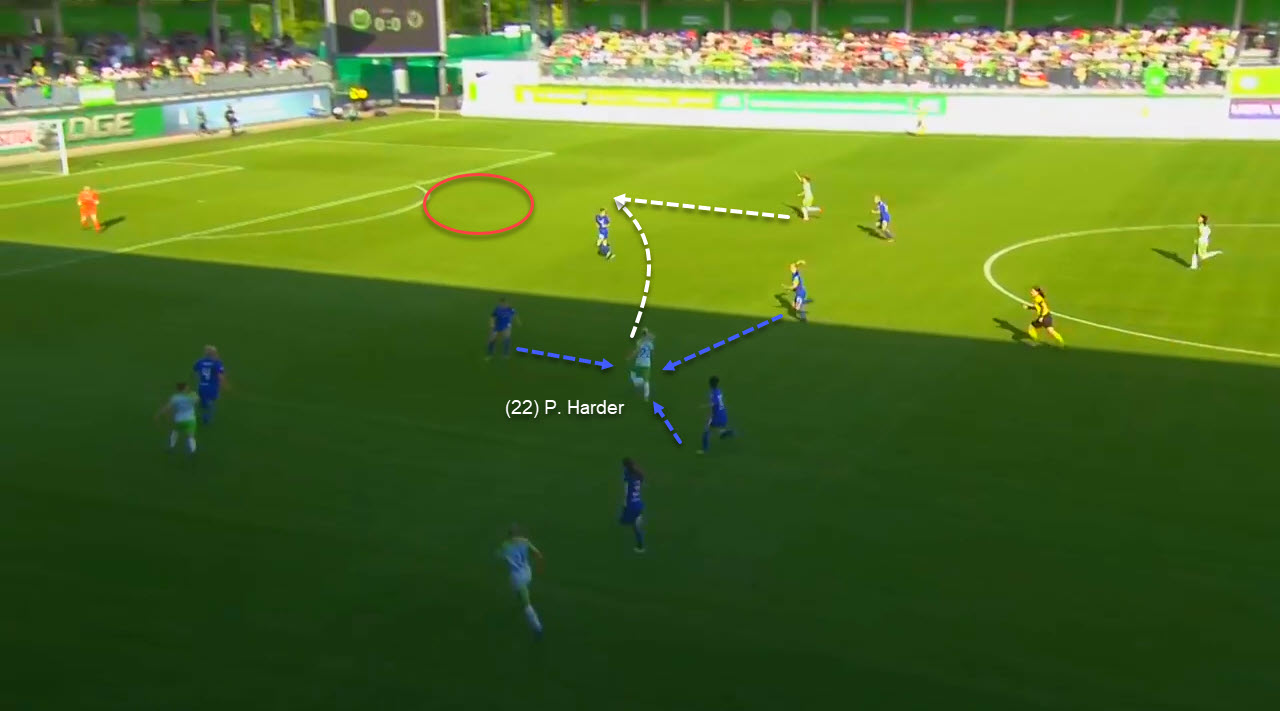 Also, her physical strength and fast accelerations enable her to get past defenders with ease and without problems. She dribbles 6.9 times per match with an average of 69.5% success, which is a number that most forwards can’t reach in the FAWSL. But that’s where Harder is different, she is a striker who has at the same time the skills of a trequartista, and the movements and goal-scoring abilities of forwards.

In this opportunity in the same match, she cuts inside from the left wing and runs past two Chelsea players who were surrounding her and decides to shoot even when she knew that three players and goalkeeper were ready to save her shot. She was able to shoot the ball at an angle in which the four Chelsea players did not expect and that clearly shows the intelligent decision-making of this player and her excellent shooting accuracy as well. 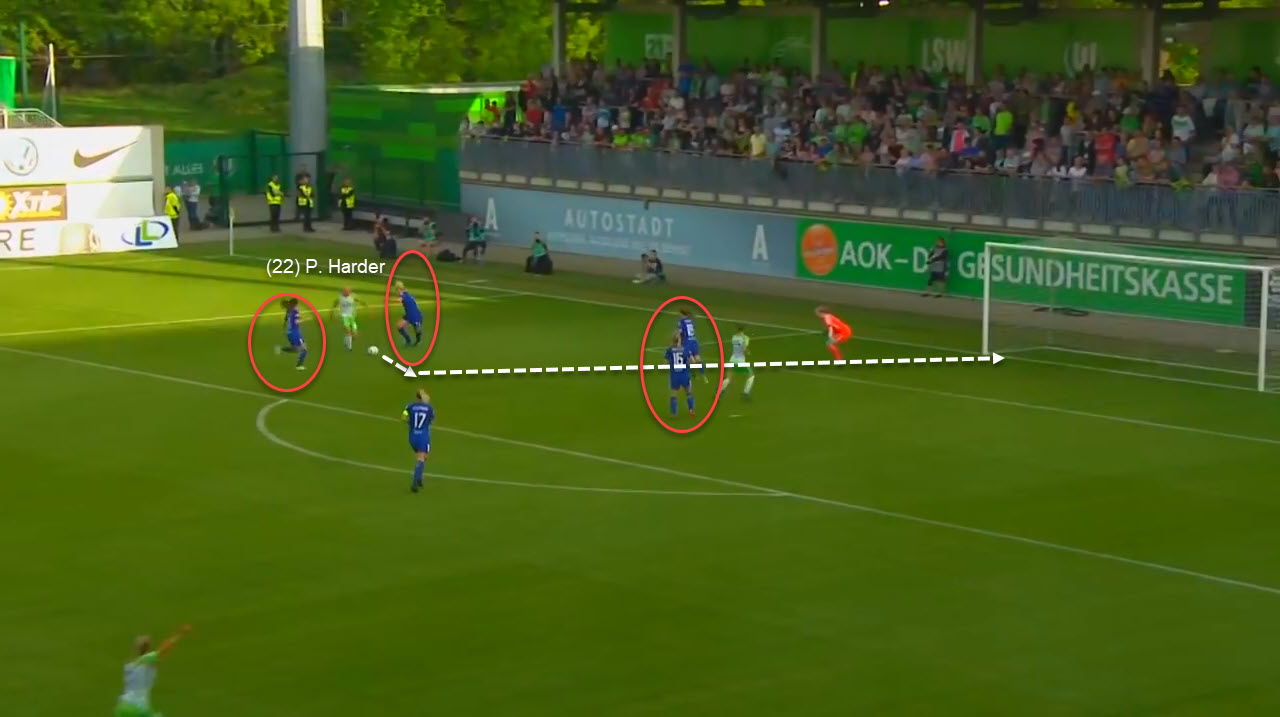 Role and impact at Chelsea

Leupolz has already gained the confidence of Emma Hayes and of her teammates at Chelsea as well during the first fixtures of the FAWSL and she proved that she can be fundamental to the team in many aspects during the seasons to come. First of all, she can play in a two- or three-player midfield without problems since she has the physical abilities that allow her to do well even when she plays with only one teammate in central midfield.

She is useful both in winning the ball and in transitions apart from the fact that she often supports the attack and scores goals. In fact, she has already scored recently with her new team. You can see here how she is able to play under Manchester City’s pressing as well and how she started to get along with Ji so-Yun immediately in midfield despite being surrounded by almost four City players. 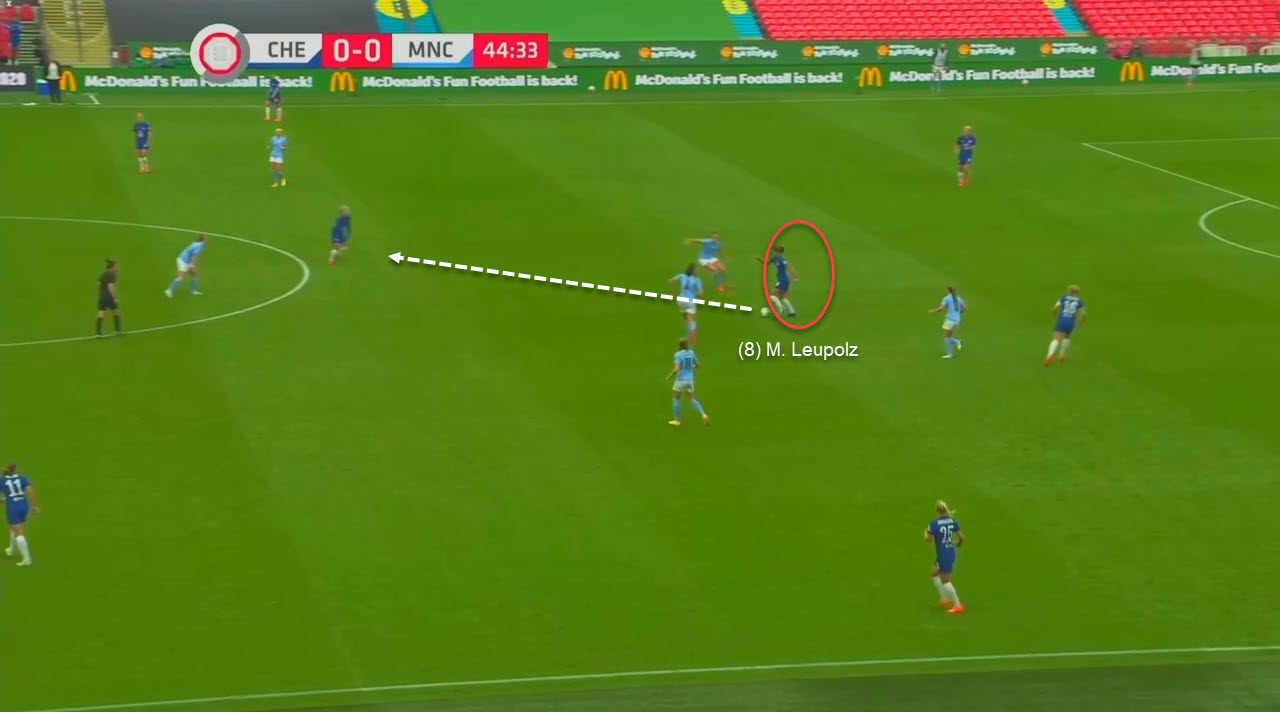 Harder, on her turn, started to adapt bit by bit to Chelsea’s tactics, especially because she was not given enough time like Leupolz who started in all almost FAWSL 2020/2021 matches so far. Nevertheless, Harder made an impact each time she was subbed on, and even when the team was winning with a large score. Emma Hayes played her on the right and recently she was used as an attacking playmaker behind Sam Kerr.

Harder will be very useful to Chelsea during this season and in the future as well since she can always create the difference in attack – she has already scored some beautiful goals and made an excellent assist to Kerr lately. This intelligent assist and good chemistry with not only Kerr but also with all her teammates make us look forward to watching some very interesting performances from this player in the near future. 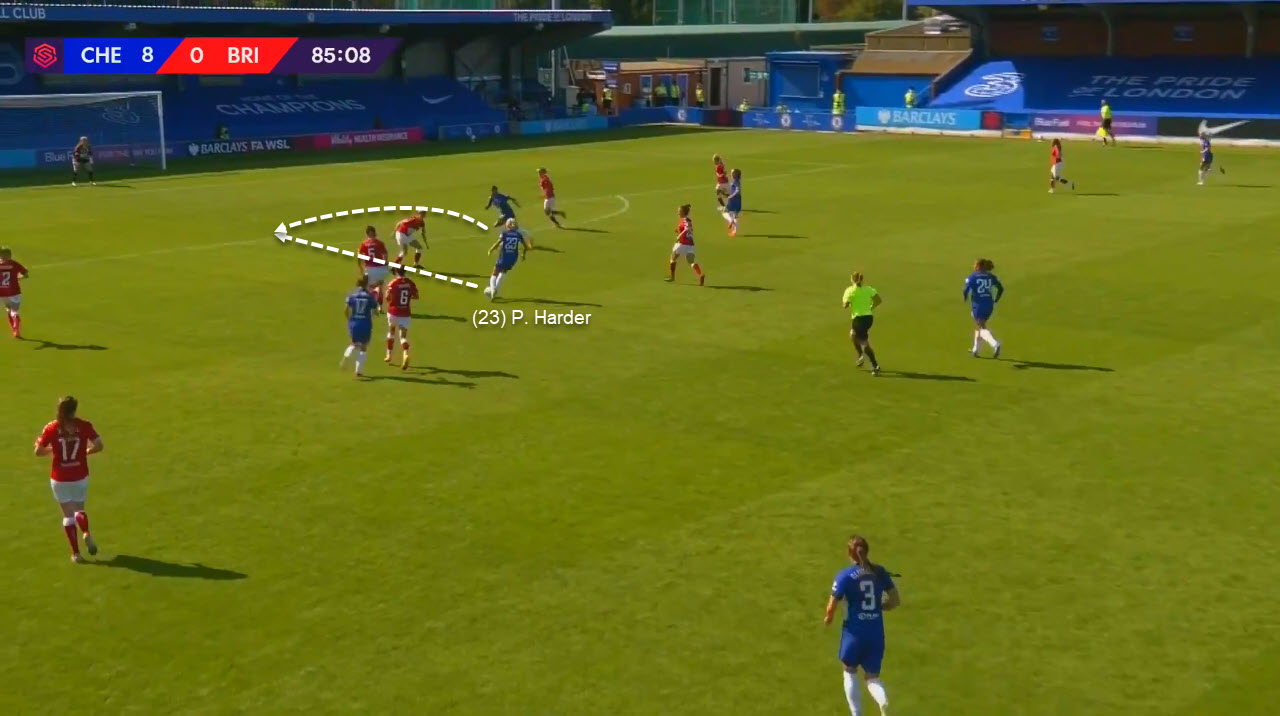 Both Melanie Leupolz and Pernille Harder are valuable signings for Chelsea and both of them have already started to show their real value on the pitch which is undeniable. However, all that is needed now is finding the best formation and tactical plans that would get the best out of all the talented players existing in this squad if they want to do well in the FAWSL and in Champions League.