After suffering one of the most humiliating defeats in their history against Bayern München, Barcelona made their official debut in this season’s La Liga in an expectedly difficult match against Villarreal. It was also Unai Emery’s return to Camp Nou, where he had been defeated in each of his 12 previous matches, the last one being the famous 6-1 comeback against PSG in the UEFA Champions League.

The match was the beginning of Ronald Koeman’s Barcelona and the first official appearance of Lionel Messi after trying to leave the club. On the other side, Villarreal arrived in Barcelona after getting four points in the first two matches and wanting to extend their unbeaten run. In this tactical analysis, we will have a look at the tactics used by both coaches. 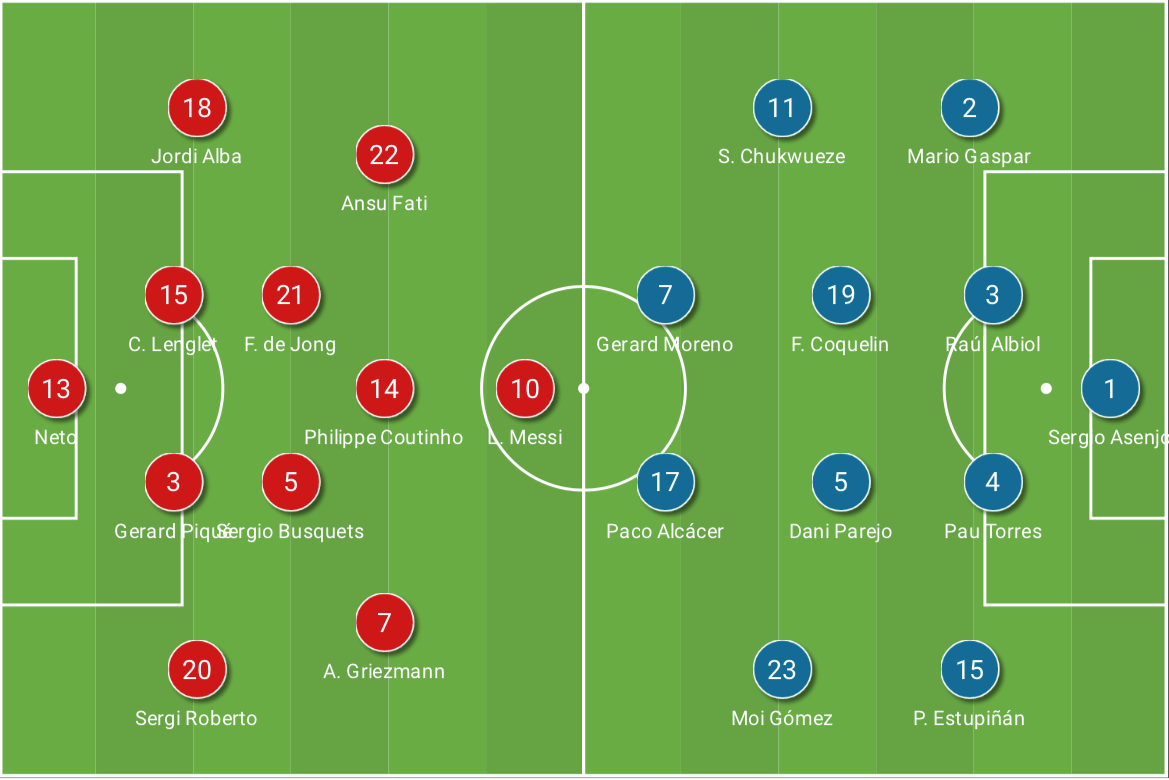 In his debut as Barcelona’s coach, Koeman opted for the 4-2-3-1 formation he had been using in the preseason, with Neto substituting injured ter Stegen; the expected back-four formed by Sergi Roberto, Gerard Piqué, Clement Lenglet and Jordi Alba; two defensive midfielders in Sergio Busquets and Frenkie De Jong; and an attack formed by Lionel Messi as a false nine with Ansu Fati, Philippe Coutinho and Antoine Griezmann behind him but with lots of freedom to move.

On the other side, Villarreal used Emery’s classical 4-4-2. In the defensive line, the only news was the inclusion of the recently signed Pervis Estupiñán as the left-back; midfield was formed by Dani Parejo and Francis Coquelin in the centre, Samu Chukwueze on the right and Moi Gómez on the left but with the freedom to drift inside. In the attacking line, Gerard Moreno and Paco Alcácer formed the striker partnership.

Barcelona not only used a new 4-2-3-1 formation but also some players had different roles and the playing style changed from previous seasons.

When playing from the back, Busquets was positioned far from the defensive line and it was De Jong who acted as the third centre-back and took responsibilities. Busquets kept himself in front of the Dutchman and behind Villarreal’s first pressing line, acting as a pivot and offering pass options in central positions. The three strikers tended to leave the wings free for the full-backs to go forward, and the attacking midfielder tried to find spaces behind the rival midfield.

In the next picture, we can see this setup. De Jong acts as the left centre-back, Busquests comes to get the ball in central positions and the full-backs provide width. The three forwards make the defensive line stay narrow and Coutinho moves behind the midfielders to create passing lanes. 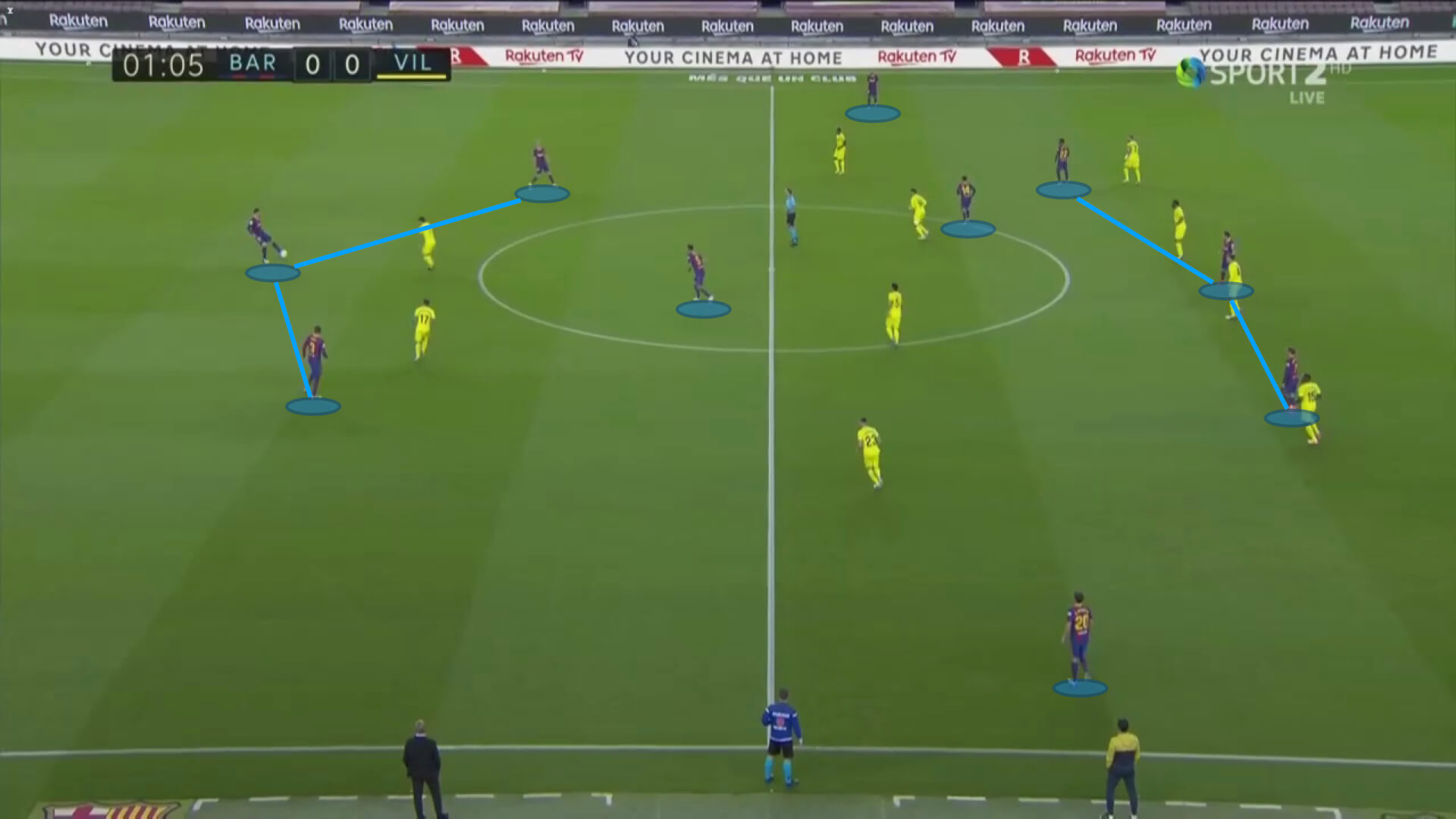 Another key in Barcelona’s attacking movements was the mobility of all their players. Depending on the position of the ball and of the full-back, the wingers hugged the touchline or drifted inside, creating doubts in the defenders and opening spaces for the wing-backs to attack and create numerical advantages on the wings.

Coutinho, Griezmann and Fati were very well coordinated between them and with Messi. There was always someone who made runs in behind while the others tried to receive the ball to their feet. The use of spaces was optimal and the four attackers found plenty of opportunities to exploit their quality. Even De Jong was the most advanced man at some points, especially when Messi or Coutinho came deep to act as playmakers.

The first goal’s play is a clear example of what’s been said so far in this tactical analysis. We can see De Jong as the right centre-back, with Lenglet on the ball trying to play from the back. The four attackers come inside and try to receive the ball between the lines, making the Villarreal defenders leave their positions to mark them. Fati runs towards the ball carrying his marker with him and Alba attacks the spaces created by this movement. Lenglet finds Alba with a long ball and he assists Ansu. 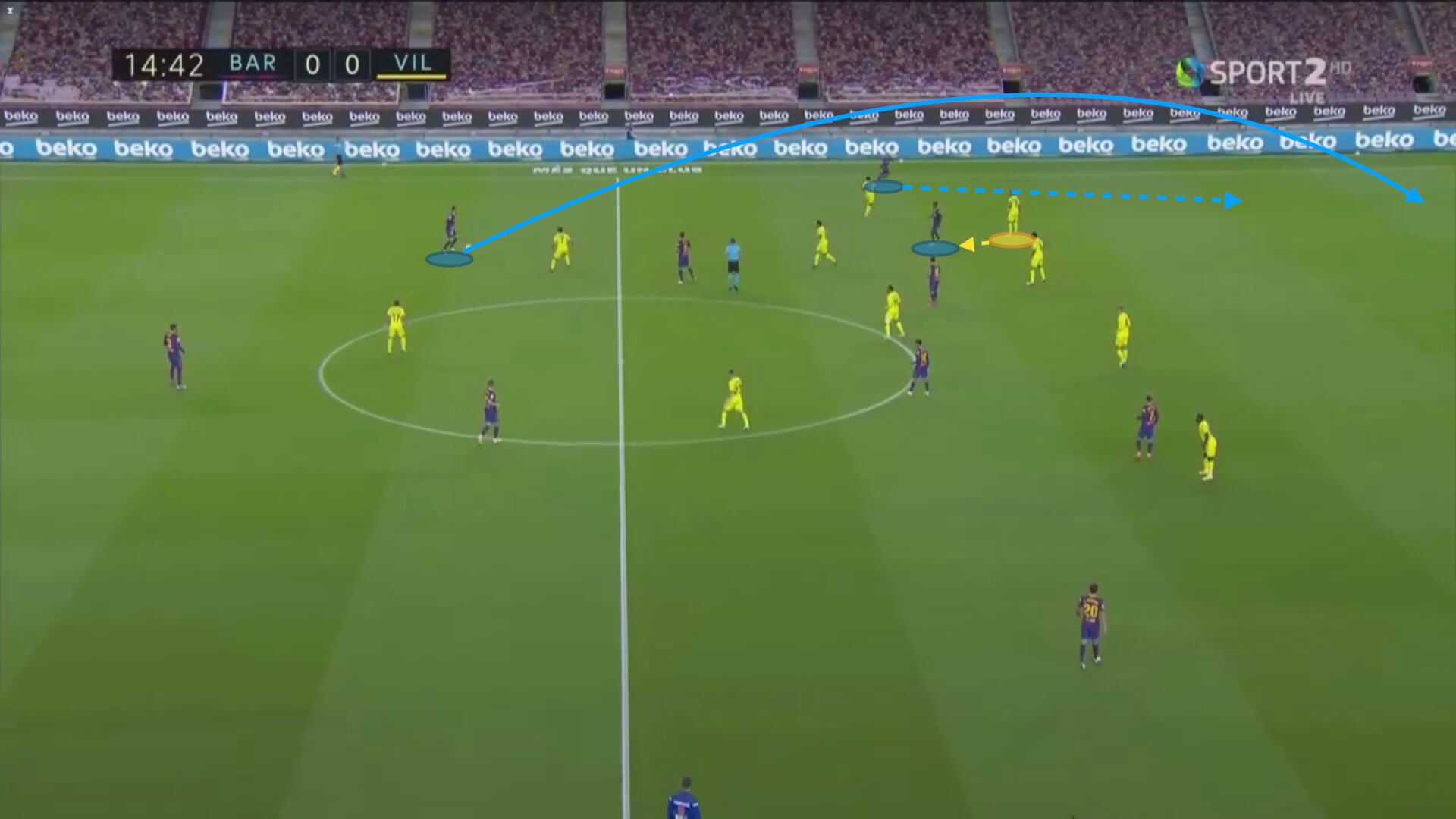 One of the changes we saw in this new Koeman’s Barcelona was the verticality. The team tried to play forward quickly and reach the opposite half as soon as they could, something very different from Quique Setién’s style, which was based in a lower-tempo buildup. With Neto always very quick and alive to finds quick passes when he had the ball, Barcelona counterattacked up to nine times and Villarreal only five.

The team also changed from long possessions to shorter and more direct plays, trying to recover the ball quickly to attack again. Barcelona had a 54% of possession (58% in the first half), but the average possession time was almost the same as Villarreal’s (21 seconds for the locals and 19 for the away team). This direct approach can also be seen in the stats: 74% of Barcelona’s attacks reached the opposite half and 29% the penalty box, while Villarreal only managed 59% and 15% respectively.

Also, key in Barcelona’s positional attacks was the number of players that arrived into the box. We could see up to six players in the box with another two at the edge of the box, leaving the centre-backs in a 2v2 situation against Villarreal’s strikers. Getting so many players to advanced positions made it easier for Barcelona to press after losing the ball without huge efforts.

Almost all the local attacks came from the left side, where De Jong, Alba, Coutinho, Fati and even Messi got together. On the right side, Roberto acted almost as a midfielder and Griezmann tended to come inside too.

Both Barcelona’s average positions and attacks distribution prove the game tended to focus on the left side as we will see below. Most of the attacks came from the left side (33, 63.4% of the total) and also the most dangerous ones, with 0.98 xG coming from that side and only 0.64 from the middle after taking out the penalty kick. Also, both left-side players, Fati and Alba, were the ones with most touches in the box with nine each. 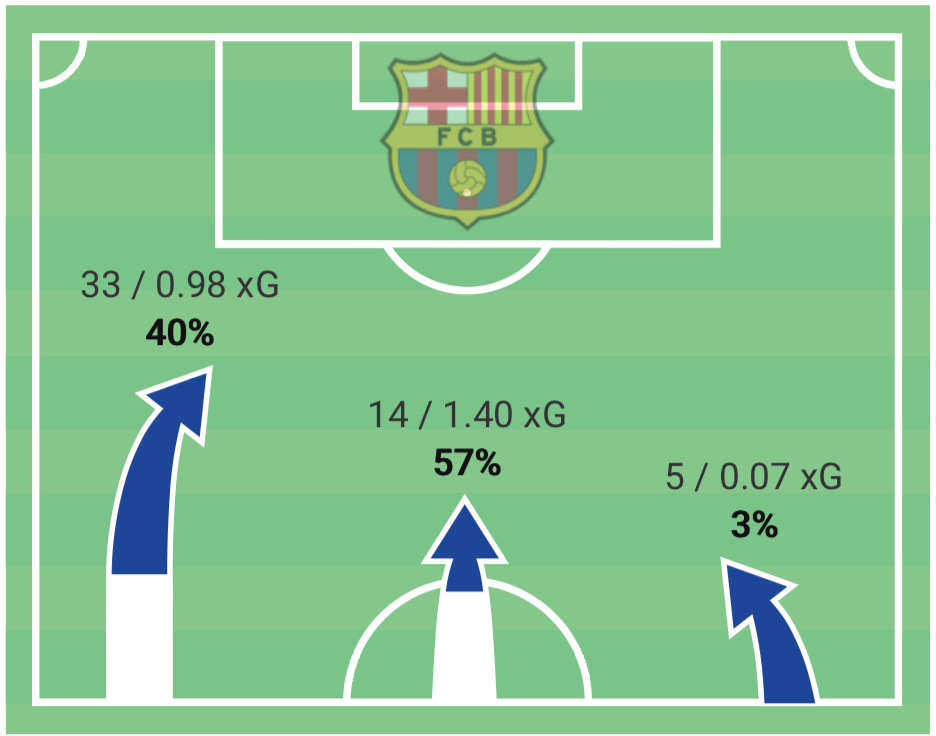 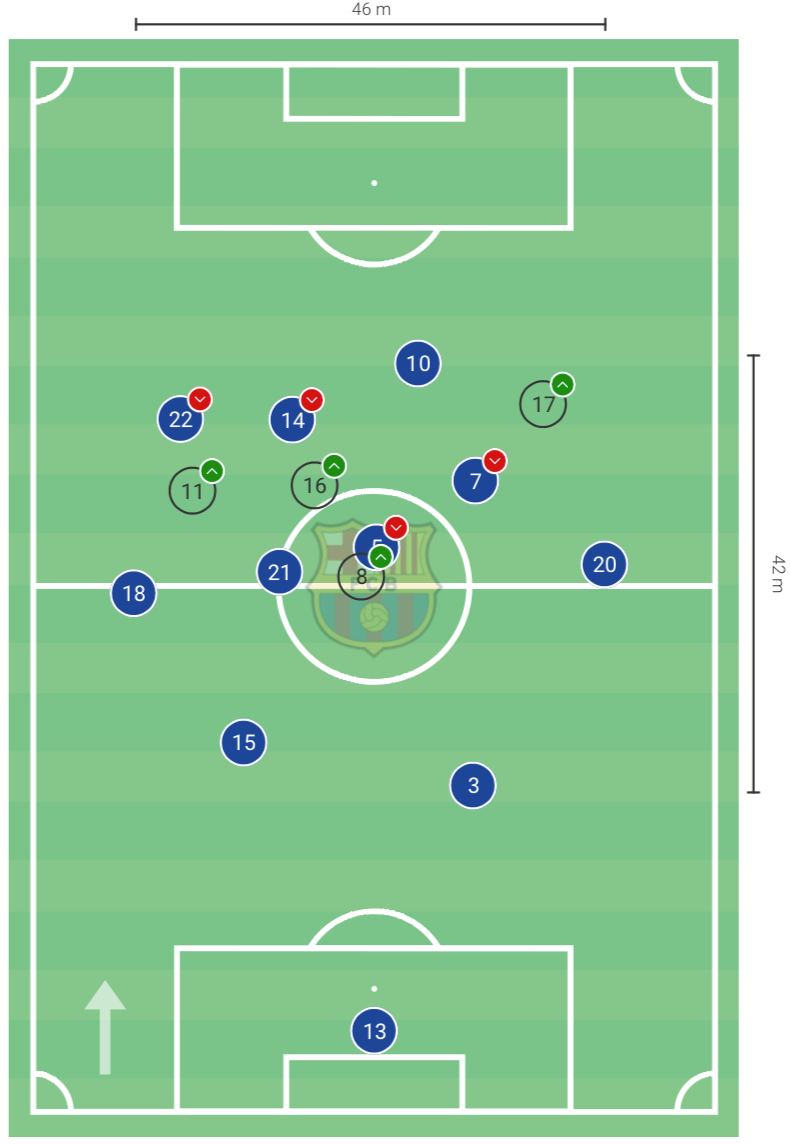 When defending, Barcelona used a quite effective high press, especially in the first half. When pressing, the team changed to a 4-1-4-1 formation with De Jong covering the space in front of the defensive line with his physical capacity and his pace to solve any mistakes. Busquets pressed higher, which is one of his best traits, recovering three balls in the opposite half (Barcelona’s most) and not needing to rush back once he was surpassed as De Jong was covering his back.

The attackers also worked very hard both when pressing and when tracking back and got seven recoveries between the four of them, making it very difficult for Villarreal to play comfortably. Even Messi worked hard off the ball and got two recoveries.

In the next screenshot, we can see Barcelona’s defensive setup. Messi shyly starts the press, letting Albiol play. Busquets and Coutinho mark both Villarreal’s central midfielders and the wingers press high. It was especially remarkable how Busquets man-marked Parejo lots of times during the game. 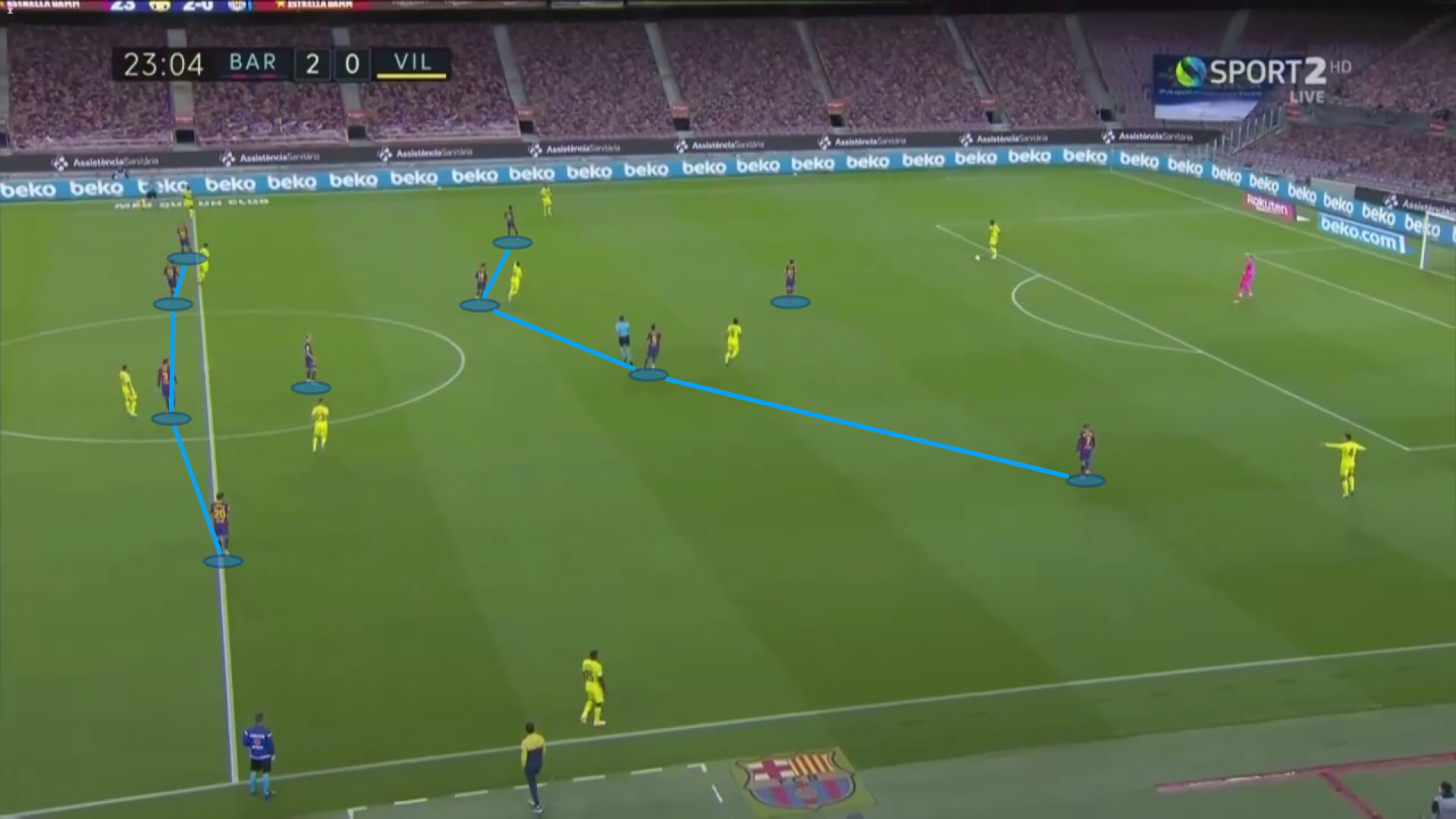 When defending positional attacks, Barcelona didn’t suffer a lot thanks to Villarreal’s lack of creativity and the defensive line had a good match and controlled any danger, limiting Villarreal to just 0.31 xG and no clear chances.

Villarreal’s lack of compactness and ideas in attack

As we saw in the previous part of this analysis, Villarreal tried to play from the back but the lack of players between the lines impeded them from doing it cleanly, being forced to try long or very risky passes that Barcelona defended easily. Parejo, expected to be Villarreal’s brain in midfield, was very well controlled by Busquets and De Jong, forcing the centre-backs to take more responsibilities on the ball.

In more advanced positions, Chukwueze tried to provide width on the right side, while Moi Gómez tended to get behind the strikers leaving the left-wing free for Estupiñán. However, Villarreal lacked quality and ideas in their attacks. The stats show us this. Villarreal’s success rate was just 53% in passes to the box, 27% in crosses, 29% in through passes, 59% in dribbles and only made two key passes. As a comparison, Barcelona got 70%, 33%, 71% and 10 in the same stats.

When trying to progress the ball, Villarreal tended to break their team into two parts, making it impossible to find anyone between the lines and forcing them to take more risks in their passes. Also, once Barcelona intercepted the passes, the team was in a bad position to defend, favouring the many counterattack opportunities Barcelona enjoyed.

In the next two pictures, we can see examples of the huge distance existing between Villarreal’s attacking and defending lines and the lack of options behind Barcelona’s midfield. In both situations, the man on the ball had to take risks and lost the ball. 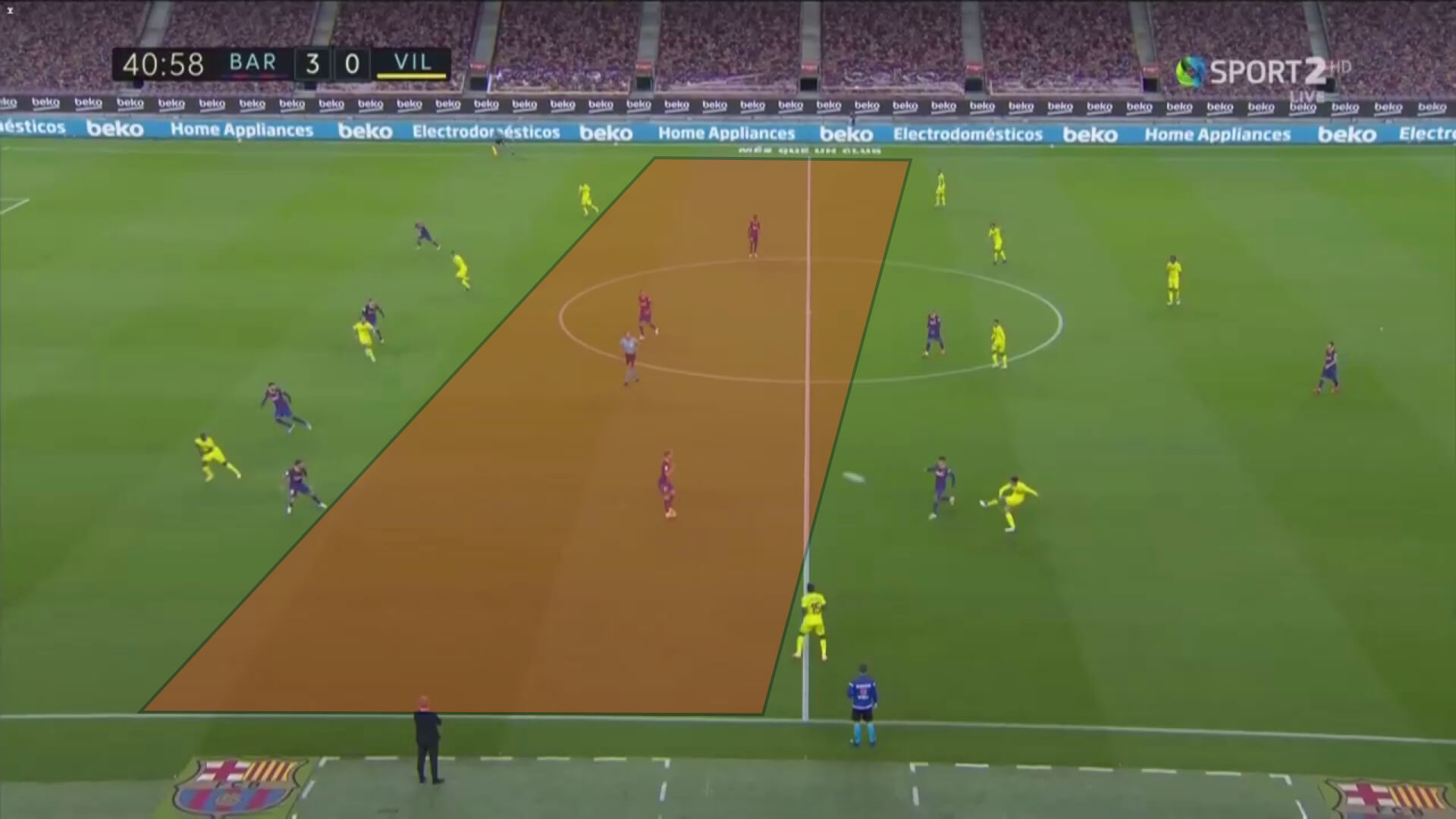 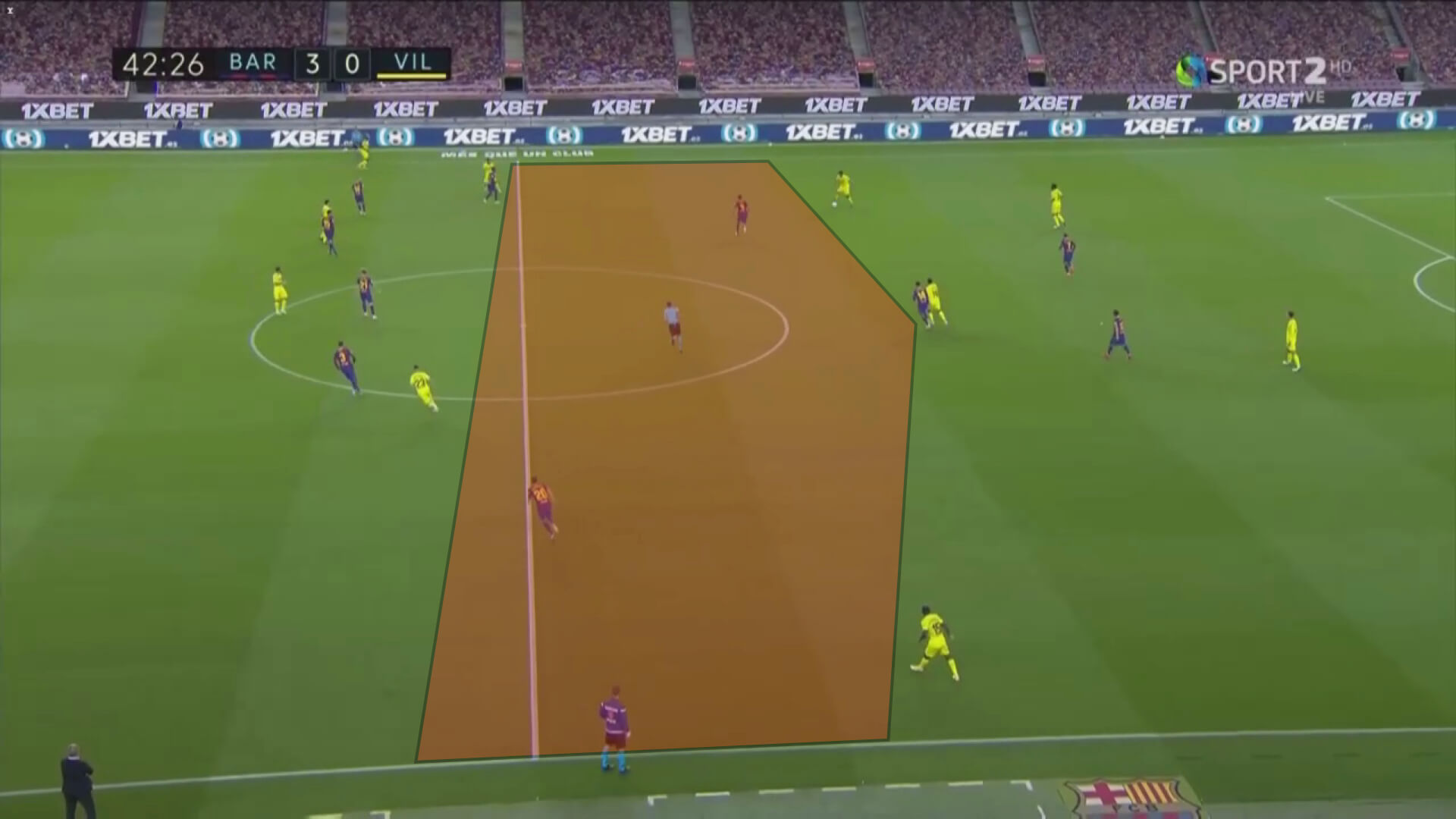 When pressing, Villarreal also lacked compactness. The strikers and midfielders tried to press high but they left lots of space between them and the defensive line, so every time Barcelona played through the press they found a highway towards the goal. Villarreal had an average length (distance between the most and least advanced players) of 50 meters, while Barcelona had just 42.

Barcelona’s second goal is a clear example of Villarreal’s problems when pressing. As we can see in the next two pictures, Villarreal left huge spaces when pressing, so a good pass from Lenglet is enough to find Countho completely alone and he turns and carries the ball 40 meters without opposition before assisting Fati. 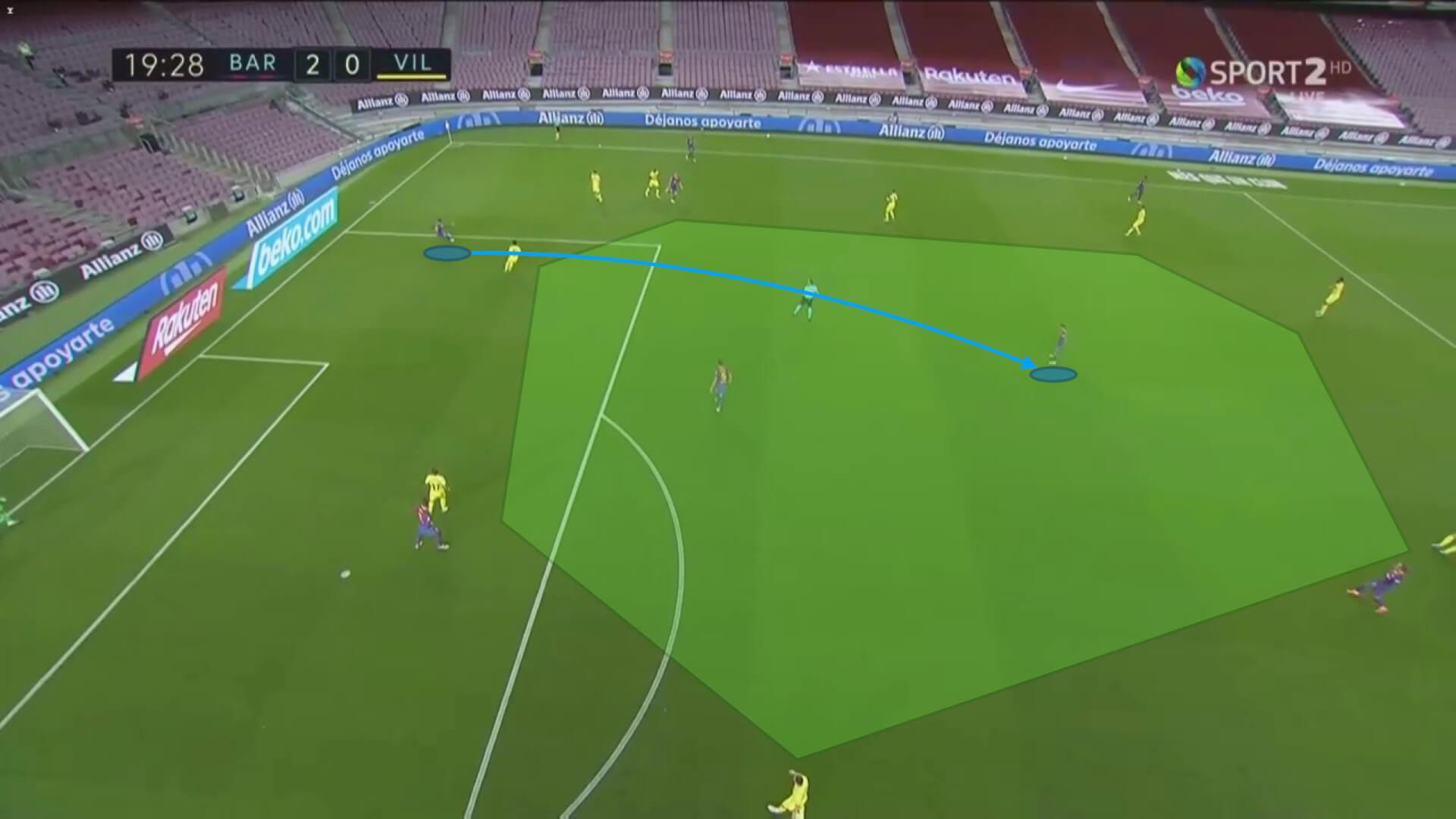 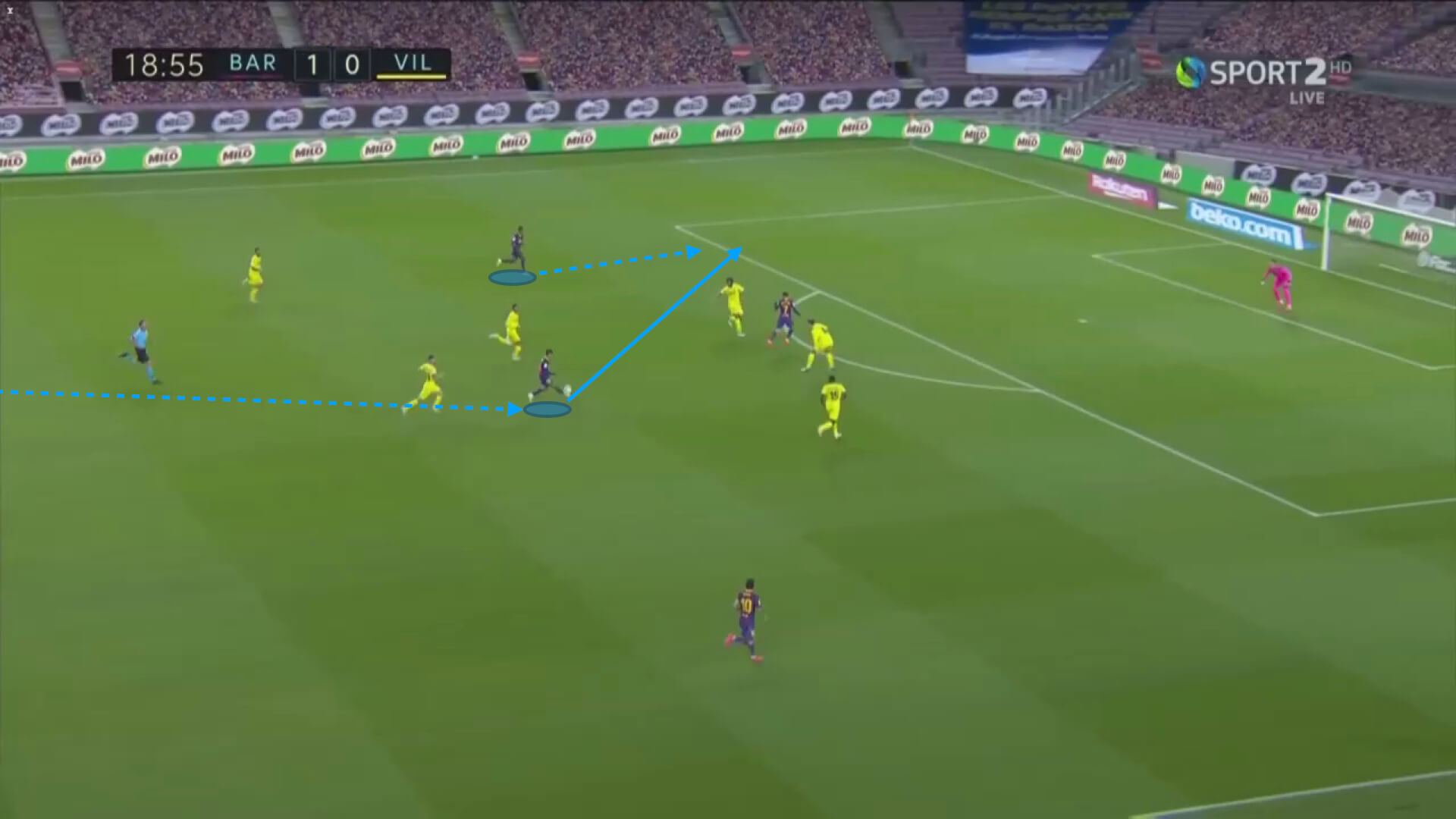 After the break and already four goals down, Emery changed to a 4-1-4-1 taking Alcácer out and introducing Vicente Iborra. With this movement, Villarreal got more presence in from of their defensive line and freed the other two central midfielders to push forward and find spaces between the lines.

In the following picture, we can see Villarreal’s second-half setup. We see Iborra in front of the centre-backs, Parejo and Triguros looking to receive the ball behind Barcelona’s midfield and the full-backs and wingers providing width and depth. 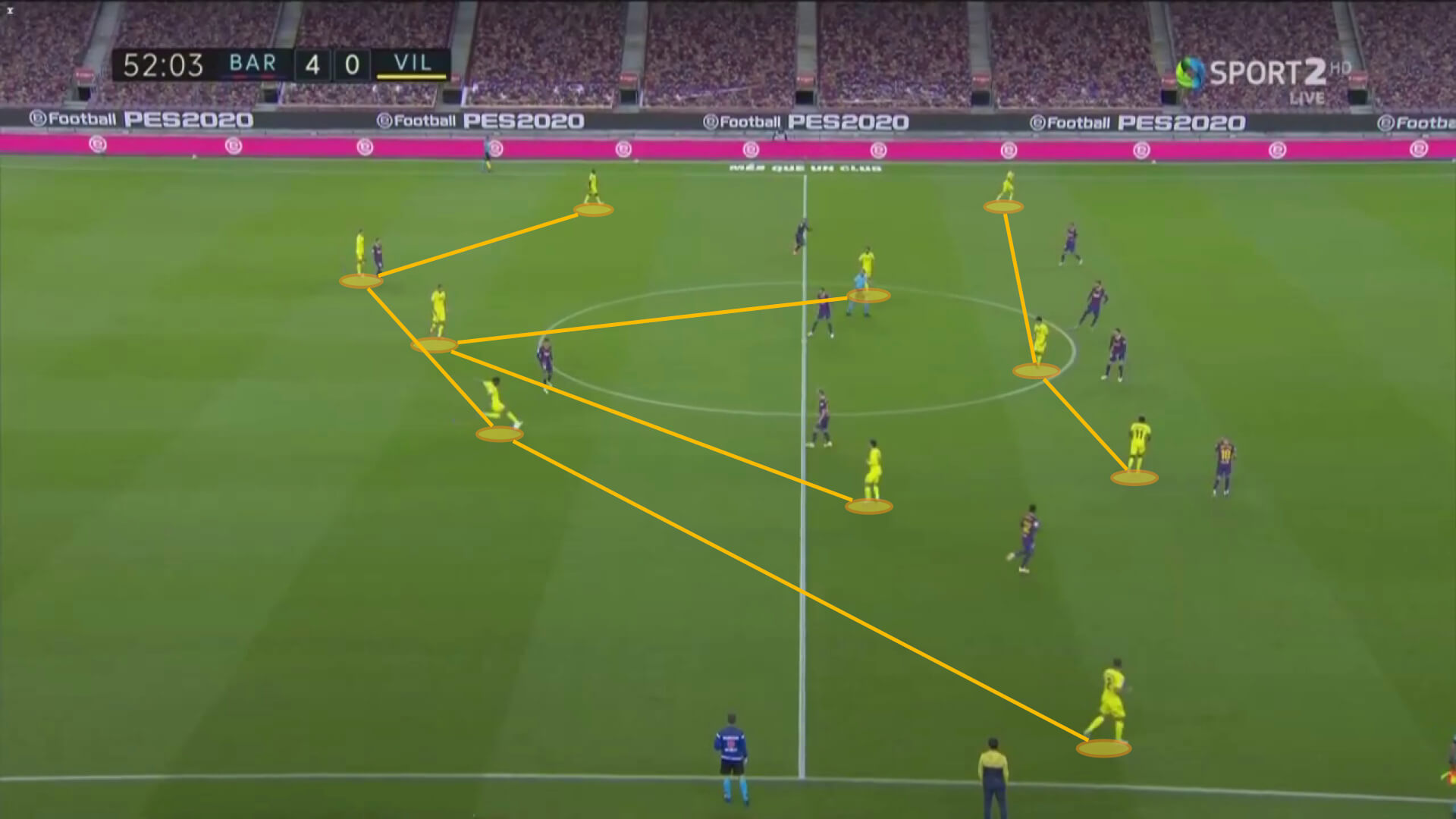 These changes and a lower pressing intensity from Barcelona made Villarreal increase their possession in the second half from 42% to 49%.

Anyway, Iborra didn’t solve every problem and Barcelona kept finding too many spaces around the defensive midfielder and losing a striker made Villarreal’s pressing less effective. In the play below we see the distance between the lines and Iborra surrounded by Barcelona players and unable to mark them all. 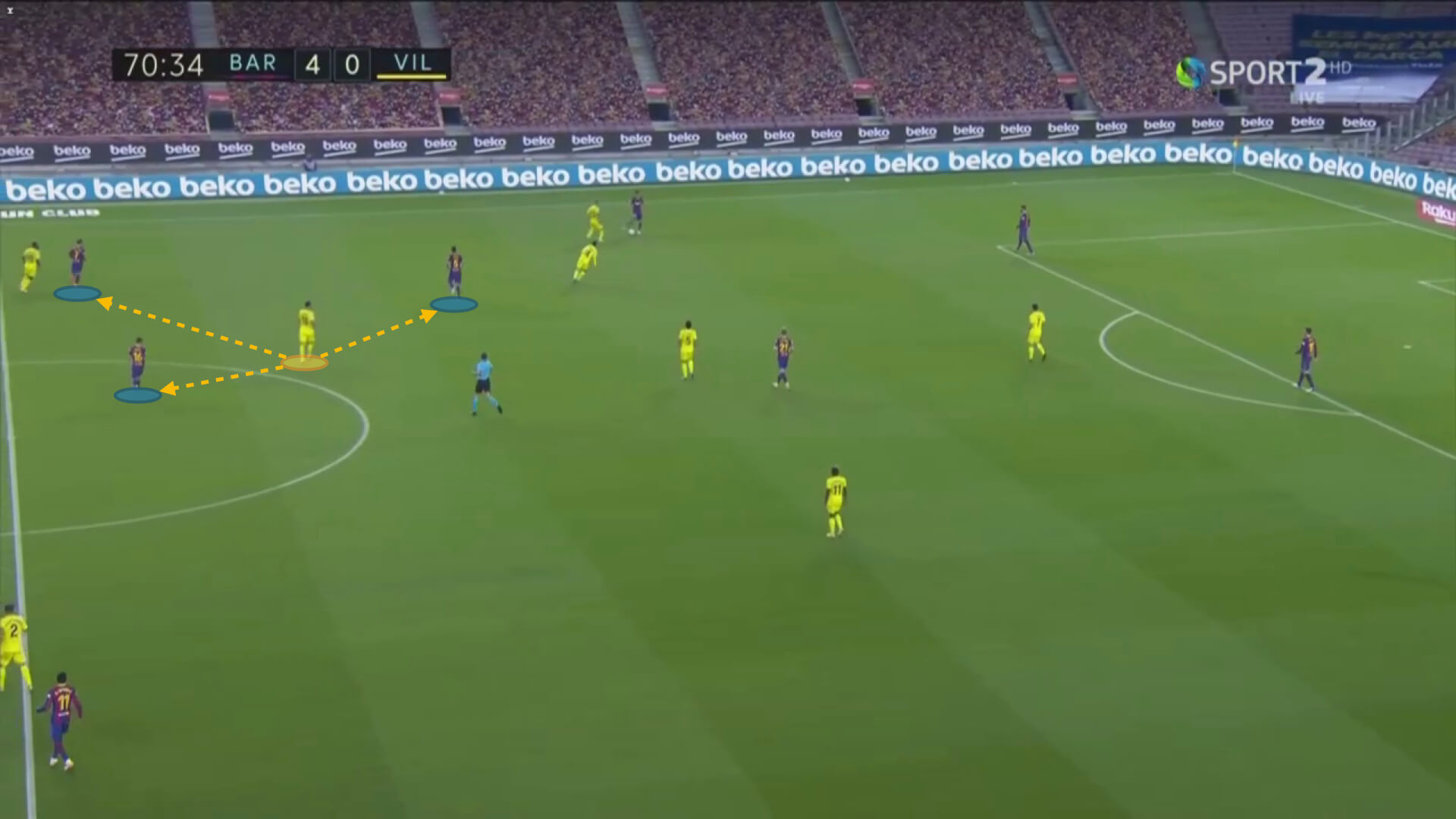 What could have become a complicated evening at the Camp Nou ended up being a comfortable win for Barcelona, deciding the game in the first half and having a quiet and effective second half. Fati stole the limelight from Messi and confirmed once again he has arrived at the first team to be a key part of it.

Emery suffered his 13th defeat at the Camp Nou in as many matches and he didn’t seem to be in control of the game at any point. His attempt to react in the second half wasn’t bad but it was too late and not enough, so the defeat was fair and he has a long way to go with Villarreal.