The 2019/20 Belgian Pro League season came to an early end due to the worldwide pandemic. As a consequence Club Brugge were crowned champions of Belgium and qualified for the Champions League. Teams like KAA Gent, Antwerp and Charleroi completed the top four and tried to give Brugge a good run for their money.

With this in mind, the game between last season’s third-placed Charleroi and fourth-placed Antwerp promised to be an exciting game. Both teams came into the game with totally different perspectives. Charleroi topped the table with nine points and because of Beerschot’s unfortunate slip up, Chareloi could be the lonely leaders if they could win this game.

Antwerp have had a rather disappointing start to the season despite winning the Belgian cup. The Great Old lost, drew and won one game before going into this game.

In this tactical analysis, we will provide an analysis of the tactics employed by both teams during this game.

Ivan Leko chose to start his team in a 3-4-2-1  system with only making one change from the previous game. Jean Butez started between the posts. The three centre-backs for the day were Ritchie De Laet, Abdoulaye Seck and Dylan Batubinsika. The wing-backs were Simen Juklerod and Didier Lamkel Zé. The midfield box consisted of Birger Verstraete, Faris Haroun, Lior Refaelov and Pieter Gerkens. Dieumerci Mbokani led the attacking line for Antwerp on paper. 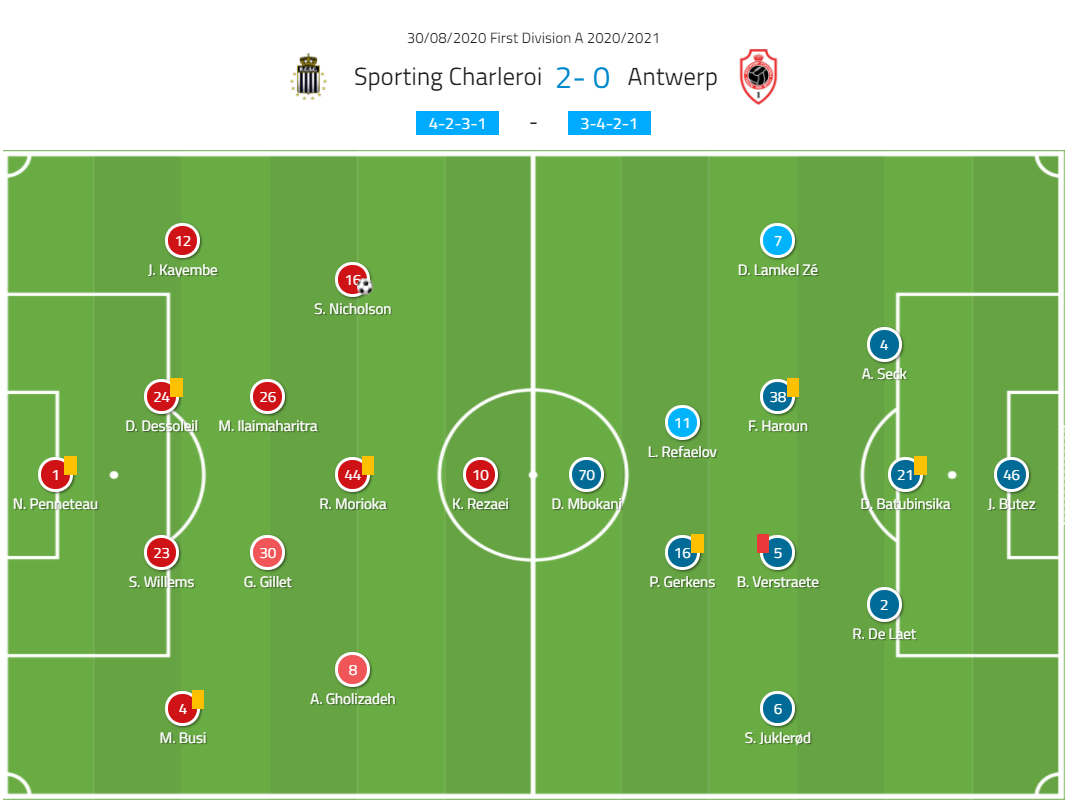 The Charleroi manager Karim Belhocine went for the 4-2-3-1 formation to field his eleven. Nicolas Penneteau was the goalkeeper. The back four consisted of Maxime Busi, Steeven Willems, Dorian Dessoleil and Joris Kayembe. In front of them were the two pivots, Guillaume Gillet and Marco Ilaimaharita while on the left was Shamar Nicholson and on the right Ali Gholizadeh. With Ryota Morioka in behind the striker Kaveh Rezaei.

Both pressing strategies frustrating each other

Both teams came into this game with different perspectives. And this was clearly within their pressing strategies. Antwerp was more urged to press forward and win the ball back in Charleroi’s defensive third.

In the below image, we can see Antwerp’s man orientated high press. Whilst Juklerod jumps and leaves the opposing winger free, he can initiate the side press. Whilst Antwerp did play with a back five, the backline could shift to one side and mark the ball side winger without worrying about ground getting uncovered on the far side in the last line. All the other options in midfield and attack were closed off by the Antwerp players. This resulted in a more direct approach by Pennetau playing 18 passes beyond his own third, thus using a more direct approach. 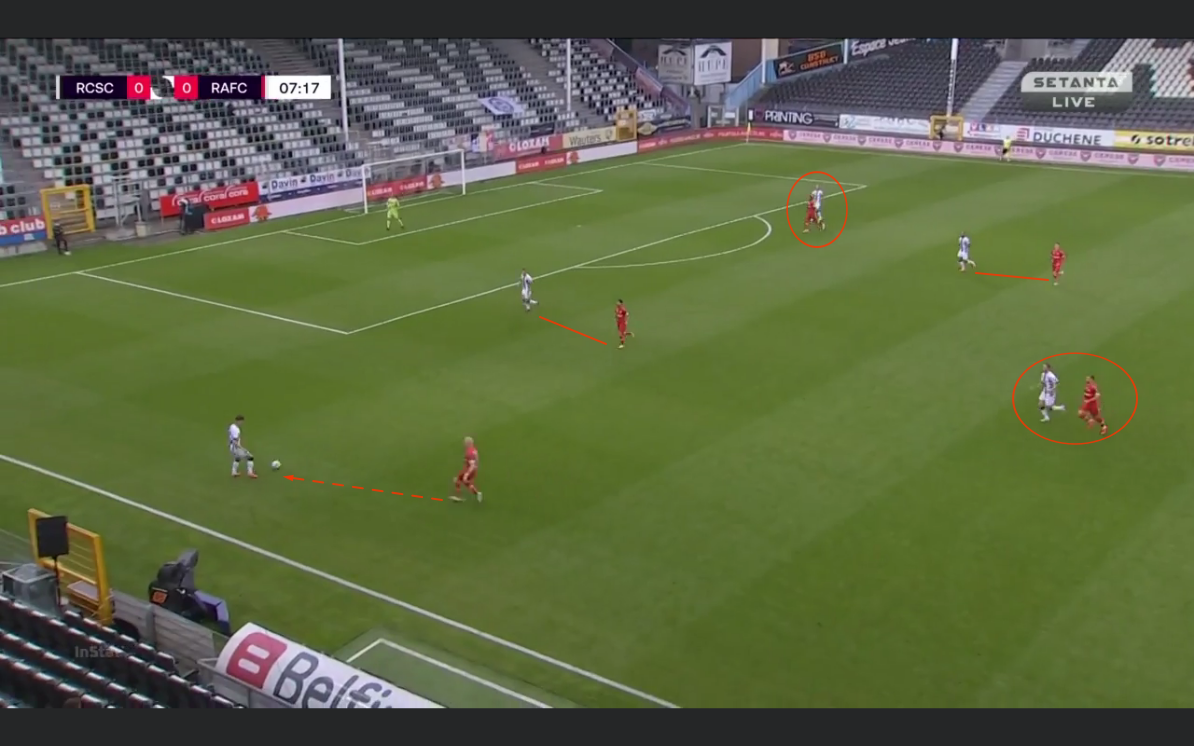 On the other hand, Charleroi chose to sit back a little and wait for the right pressing trigger to occur and then win the ball back in a good area. The image below shows how they would wait in a low/medium block for a mistake in Antwerp. In the image we can also see the Antwerp centre-back on the ball raising his arms due to the lack of options. This complements the Charleroi block. They didn’t engage in pressing the ball carrying centre-back by staying in position. Especially against centre-backs weak on the ball this is effective as they cannot find options in between the lines. The solution lies in dropping movements from Antwerp’s midfielders in between the lines. 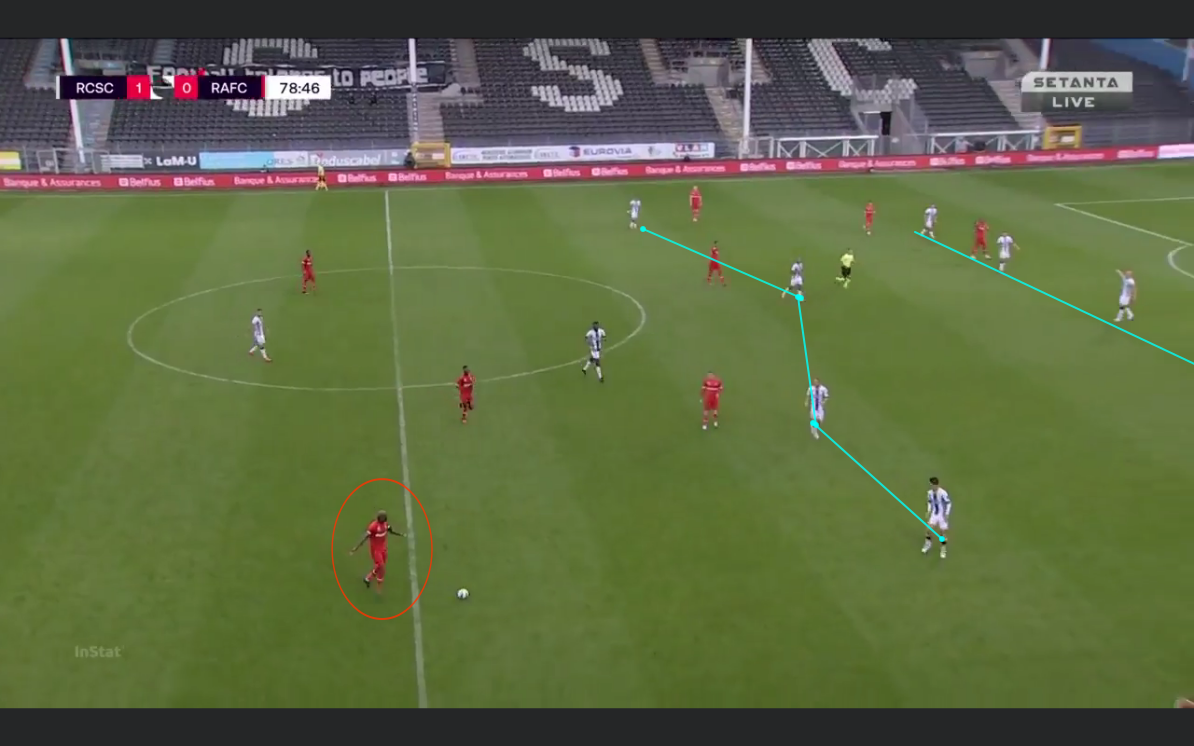 The right pressing trigger was when the outside centre-back would receive the ball. An example below. Once the ball was played to Antwerp’s outside centre-back, a man-oriented press would occur to the side. The key laid in the lack of urgency in the early stages of the game. If Antwerp is allowed the time, they could play out. And Charleroi missed the urgency once the pressing trigger occurred. Predominantly because the centre-mid had to cover to close down the fullback due to the overload Antwerp tried to create on the flank. This is also clear in the image below. 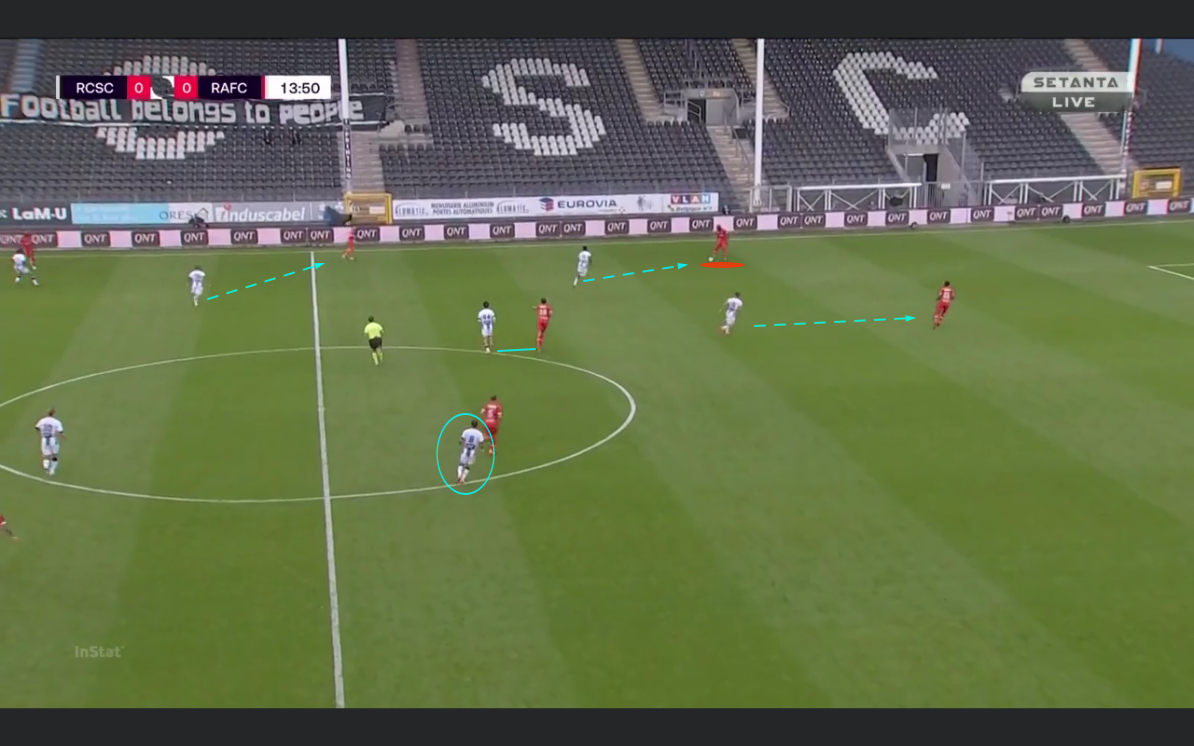 Antwerp’s urgency was also in possession. After just 20 minutes into the game, Antwerp were reduced down to ten men. Despite this loss, the game ended with Antwerp having 51 per cent of the ball during this game. By creating overloads in certain key areas on the pitch, Antwerp could still hold possession and try to find a way through.

This was Antwerp’s gameplan before the game. Leko chose for a box midfield in order to overload this area as seen below. Refaelov would drop from advanced areas to make this possible. 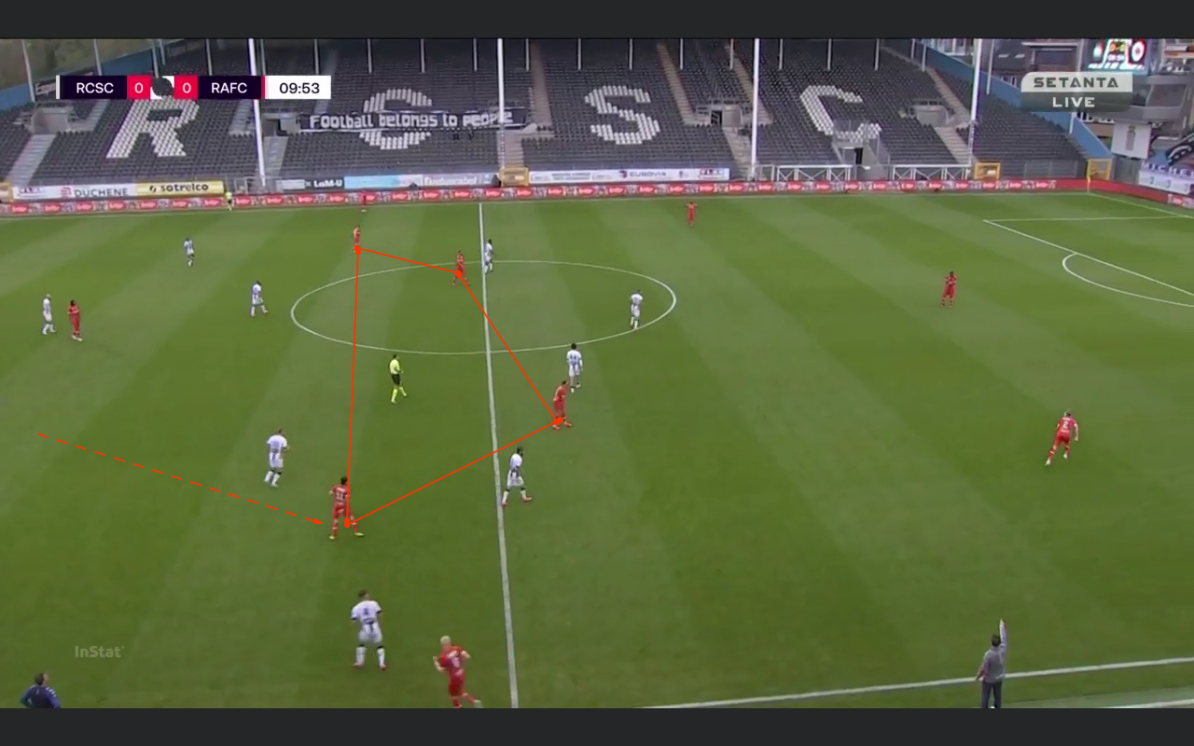 The midfield box didn’t only allow a numerical advantage but also a positional one. Refalelov and Gerkens would position themselves in the half-spaces behind the opposing wingers. This would result in Gillet and Ilaimaharita taking up a position more to the sides due to the man mark intentions. Consequently, the centre opens up and facilitates central penetration or even wide overload opportunities. 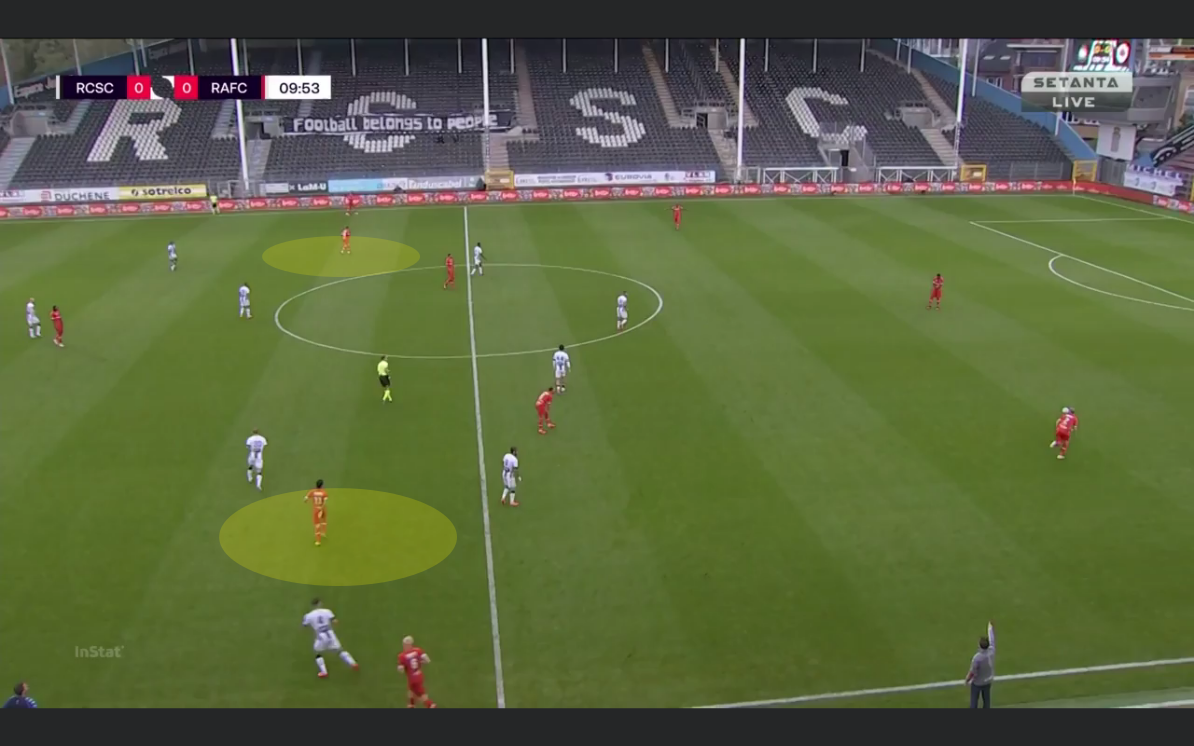 Not only centrally overloads were created by Antwerp. Also on the flanks, The Great old tried to be creative in their positional play. The image below shows their numerical advantage in a rather static way. In this case, making it dynamic would give them a chance to attack in depth. 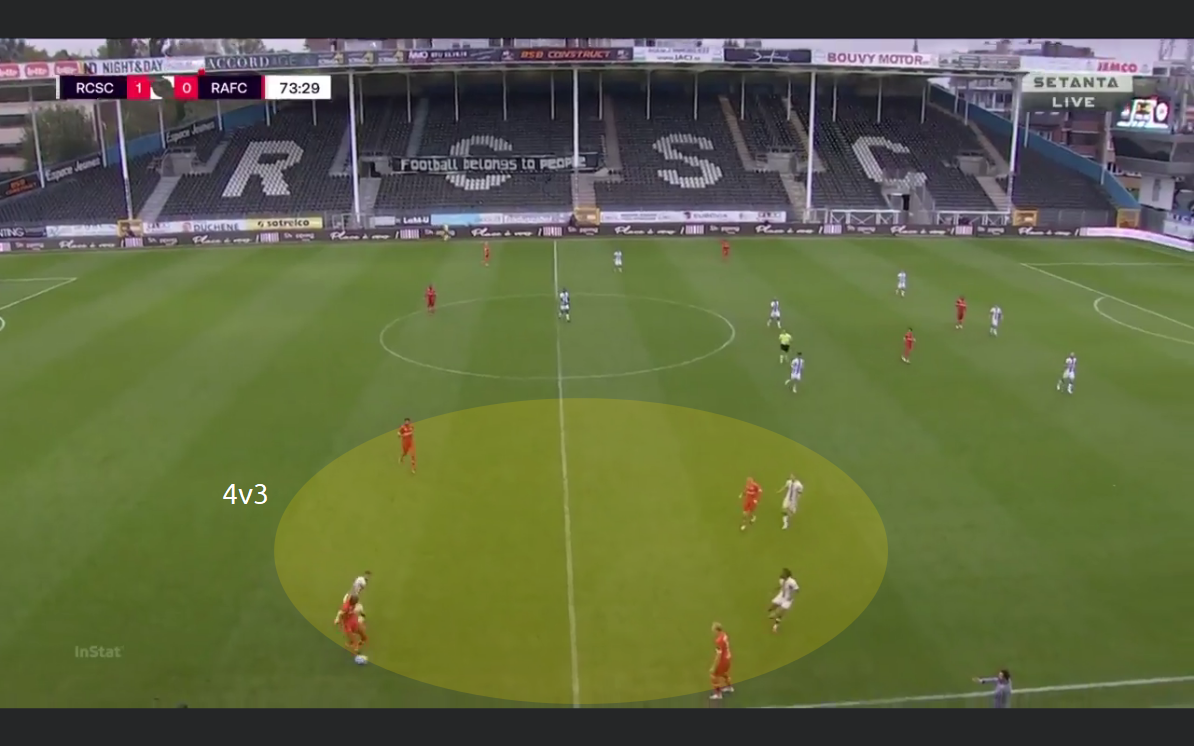 It would often be the in-out passing that would create effective ball progression. The example below shows how the inside position of Gerkens attracts three Charleroi players. By playing into the block, all the attention of the defenders goes to that area. Which of course opens up the space on the side. When playing at a high speed this is an effective tactic to progress play which the great old looked to do time and time again. 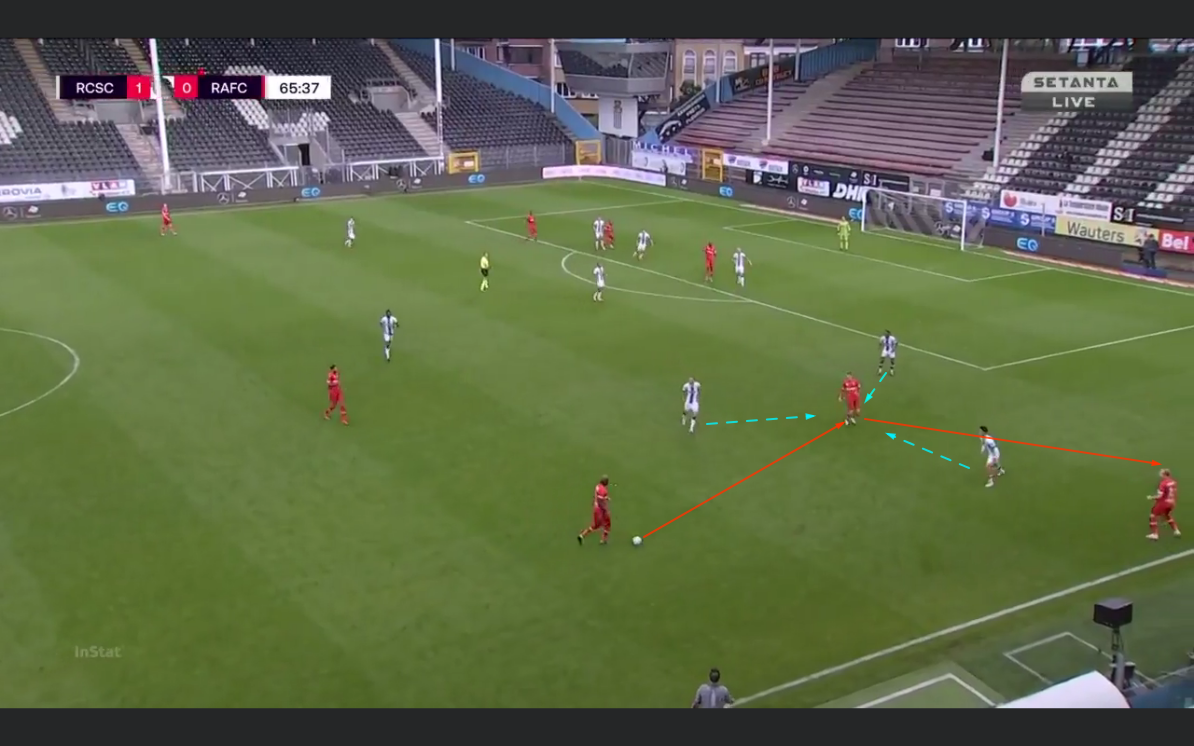 Whilst Charleroi allowed Antwerp on the ball, the possibilities to counterattack would increase the home side. Especially when Antwerp went down to ten men and were trailing with one goal to nil. Charleroi’s first goal demonstrated how well constructed their counterattacks are.

Ilaimaharita dribbles inside, whilst all players involved in the counterattack stay and run down the central vertical lanes. Once Ilaimaharita switches play, an underlapping run is made to distract the opponents’ last line. This gives Nicholson the time and space to cut inside and slot a well-worked counter-attack home. 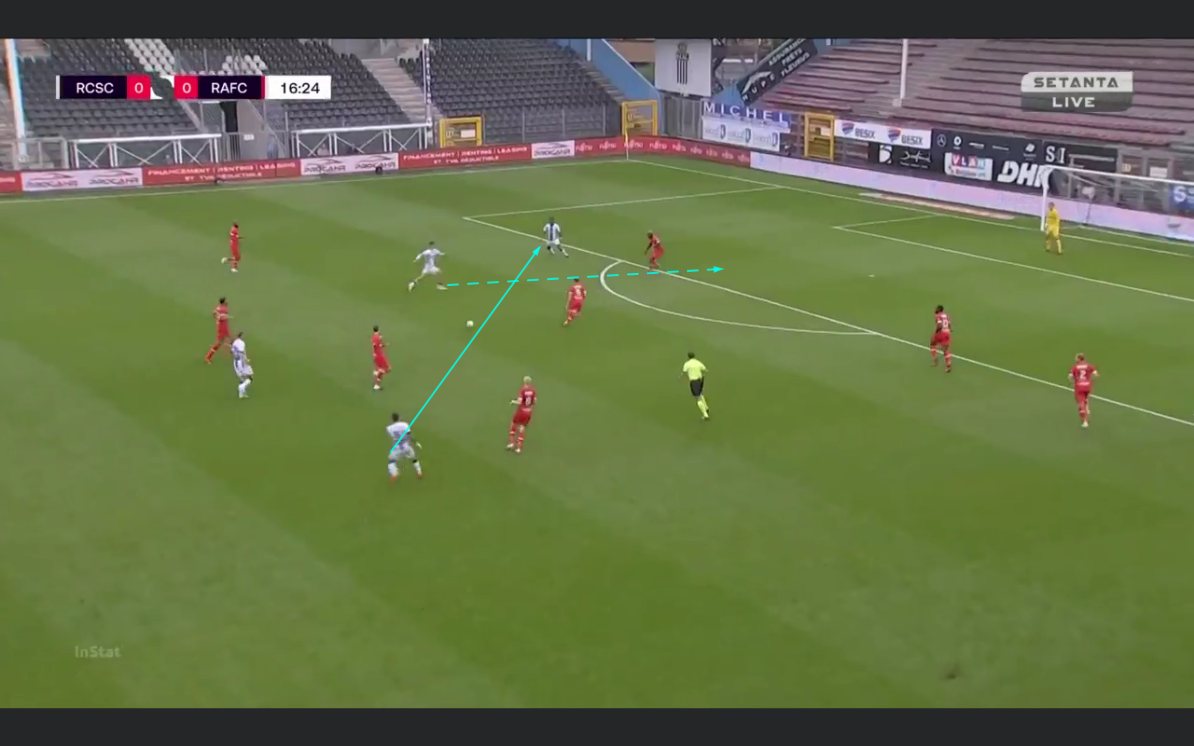 But the counterattacks weren’t always effective. Charleroi completed a total of nine transitions from defence to offence. The positioning of the players in the vertical lanes were right to create a successful transitional moment. But the lack of unselfish movement to create space for a teammate was missing. Meaning that runs into depth without receiving the ball and attract any defenders and create space and time for the ball carrier was missing. For instance, in the example below, The strikers run in a vertical line straight forward  movements causing a lack of distraction for the two Antwerp defenders. Which consequently results in a loss of the ball. 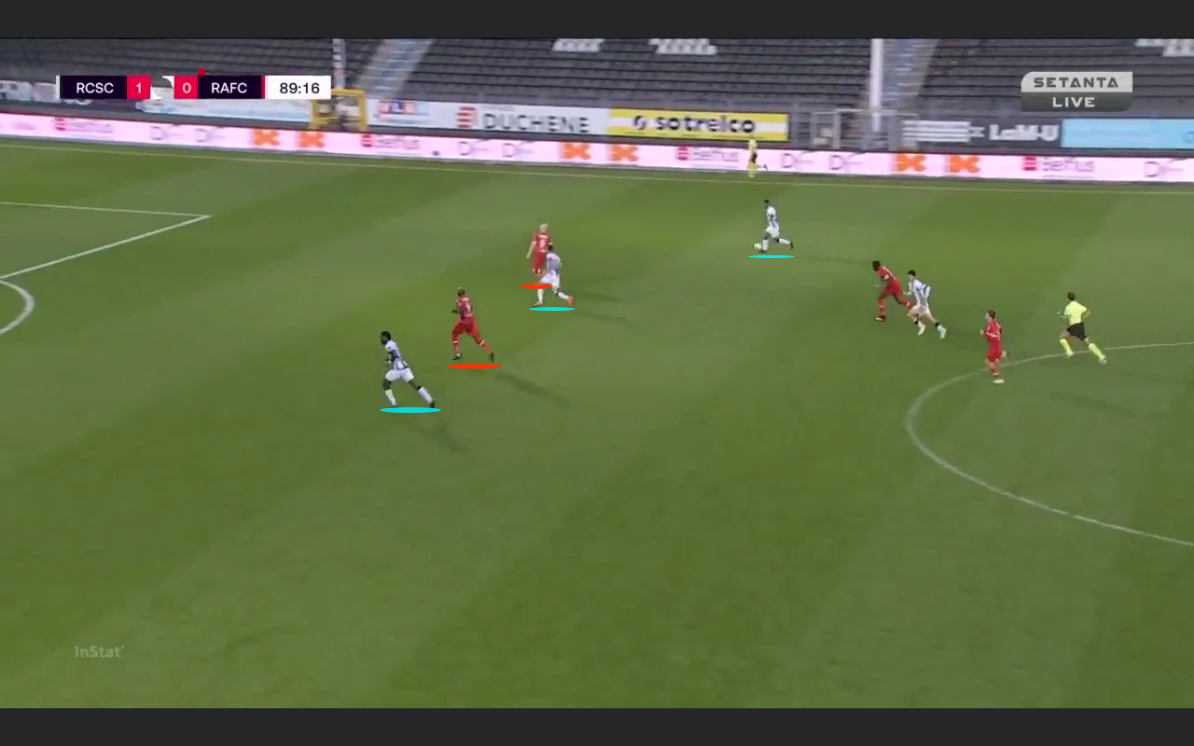 To conclude this tactical analysis Antwerp surely gave a good shot after going down to ten men but in the end, Charleroi prevailed and won the game by two goals from Nicholson. Antwerp left disappointing after this loss and are extending their difficult start under Leko although his ideas do give a sense that better will come.

Charleroi extended their winning streak to four games as many believe that this could be a great opportunity for Charleroi to have a go at the title. Some are even comparing this Charleroi side to the Premier League fairytale of Leicester City. Especially because the big teams like former Manchester City captain Vincent Kompany’s Anderlecht and Phillipe Clement’s Brugge are struggling.