Vincent Kompany’s second game in charge of Brussels side Anderlecht saw him travel to the coast to face KV Oostende in this Belgian Pro League match on the 28th of August. The former Manchester City defender saw his side throw away a 1-0 lead against Mouscron at home in the 93rd minute in their previous match, and this time his side had to come back from 2-0 down to draw 2-2. Draws were a problem for Anderlecht last season, and are certainly something Kompany needs to work on.

Friday’s game had plenty of interesting players on show for both sides, with Brighton loanee Percy Tau, who has yet to play an EPL game, putting in a strong performance. For Oostende, they gave former Norwich, Barnsley, and Portsmouth midfielder Cameron McGeehan his first start of the season. Compared to the previous Friday’s 0-0 draw, this game was certainly an improvement and was interesting tactically.

This tactical analysis will look at how Oostende were able to race into an early two-goal lead, as well as why Anderlecht were unable to do much damage in the first half. Finally, the analysis will focus on how Anderlecht’s tactics changed at half time, and why they were able to create the goal that got them back into the game. 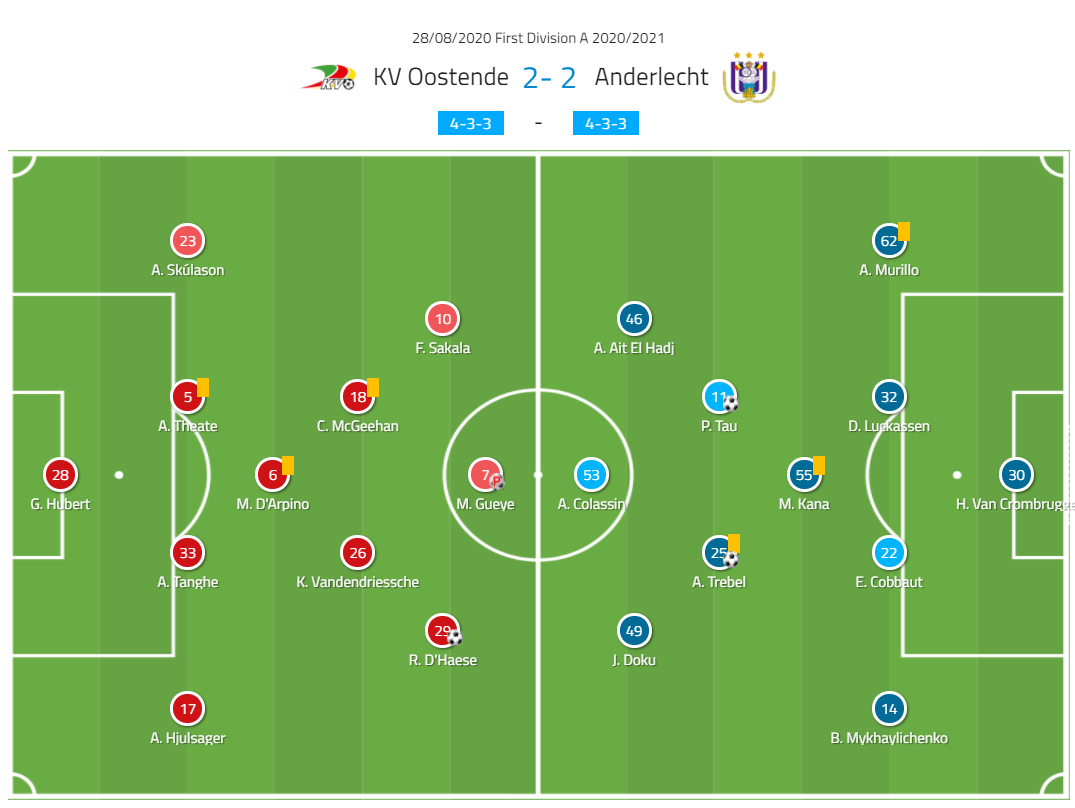 Home side Oostende were able to welcome back last season’s top scorer Fashion Sakala, who started wide right in the 4-3-3 formation. In goal was Guillaume Hubert, with Icelandic defender Ari Freyr Skulason at left-back and the versatile Andrew Hjulsager at right-back. Between them, Arthur Theate and Anton Tanghe were the centre-back partnership. The three-man midfield consisted of Cameron McGeehan, the experienced Kevin Vandendriessche, and Maxime D’Arpino, who was in the holding role. Makhtar Gueye led the line, with Robbie D’Haese on the opposite flank to Sakala.

For Kompany and Anderlecht, they also went with their usual 4-3-3. Despite rumours of a move away, Hendrik Van Crombrugge started in goal, with Derrick Luckassen and Elias Cobbaut in front of him. The impressive Bogdan Mykhaylichenko was at left-back, with Michael Murillo at right-back. The midfield three was made up of Marco Kana in a deeper role, with Tau and Adrien Trebel pushing on in support of the front three. Kompany dropped Landry Dimata in favour of Antoine Colassin as the striker, while Jeremy Doku and Anouaur Ait El Hadj were the wingers.

Taking the game to Anderlecht

Oostende manager Alexander Blessin was working with RB Leipzig before his switch to the Belgian coast. It is clear that he has brought the high-intensity press displayed by the German side with him and is attempting to instil it into the Oostende team. From the very first minute, Oostende were pressing Anderlecht high, looking to put their so far fragile defence under pressure, and not allow them to settle. Oostende have gone through something of a youth revolution over the summer, clearly wanting younger players who can play this sort of style.

From the image below, we see an example of how high Oostende are pressing. Last season, they sat deeper, and would only press around the halfway line. However, looking at both McGeehan and Vandendriessche, we see they are actively trying to disrupt Anderlecht in possession. This is also a dangerous tactic with the pace of Doku on the left, as there was plenty of space in behind the defence in which he could run into. 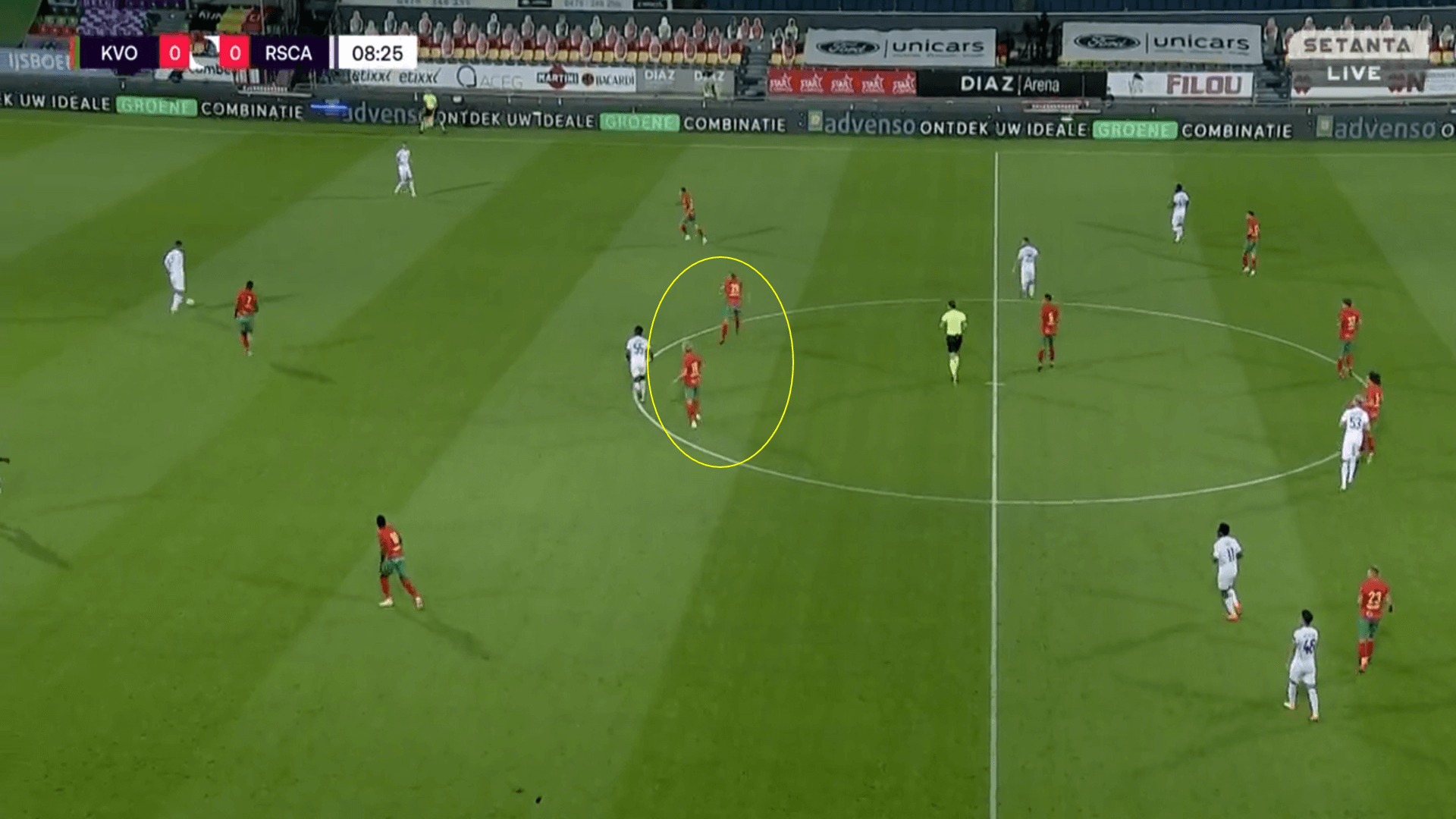 In the early exchanges, Oostende were successful in pushing Anderlecht back to the keeper, who did not have the passing accuracy to find players in behind the press. This high press was the catalyst for the opening goal for the hosts, who were able to win the ball high up the pitch from an Anderlecht throw-in. With so many players already in attacking positions, they were in a great position to create an attacking opening, as we see below. 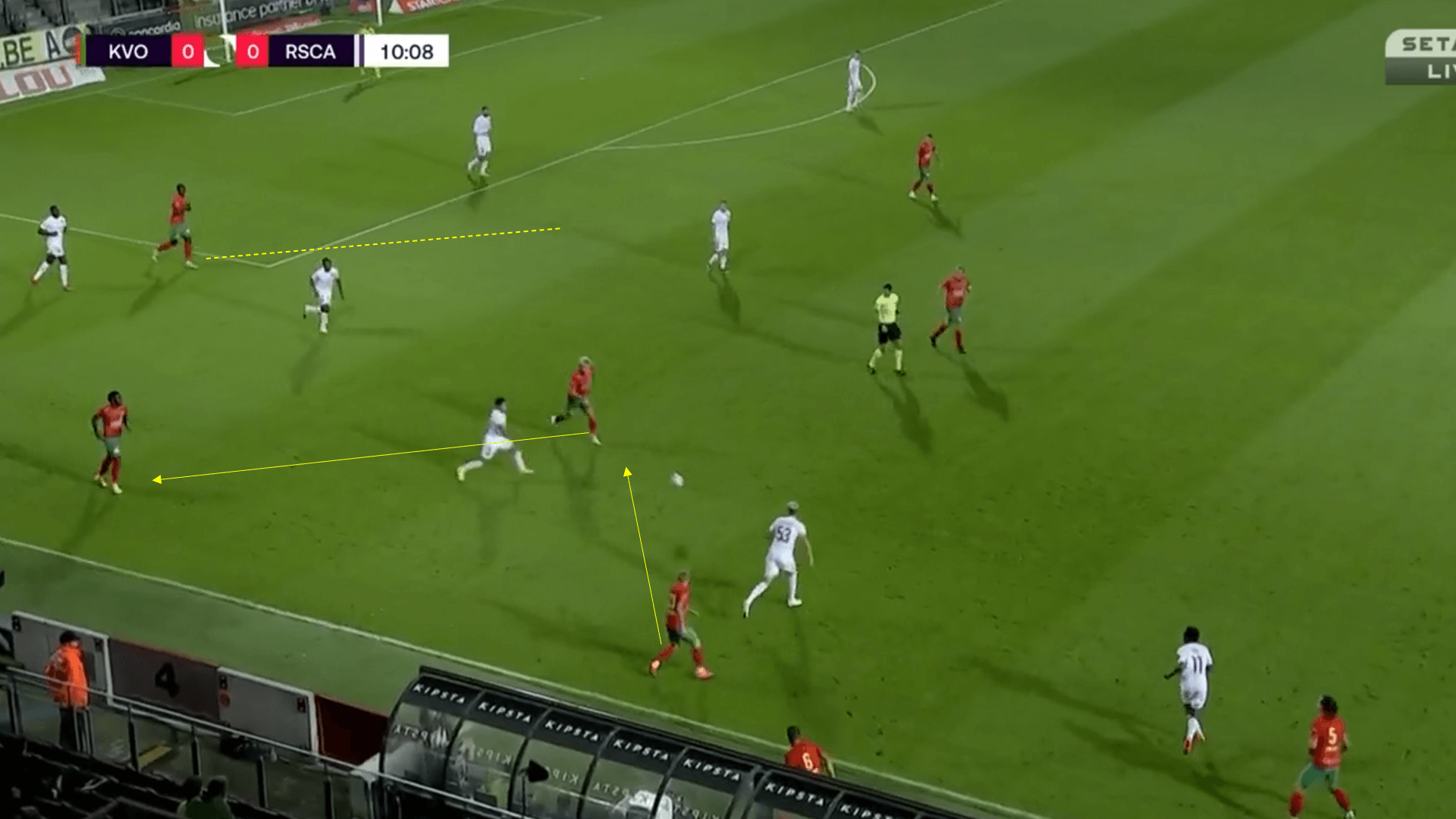 Oostende are able to work the ball well to Gueye, who lines up a shot. Anderlecht’s defensive fragility shines through once again, and, looking back, Kompany will be deeply disappointed that this led to a goal. Eventual goal scorer D’Haese is at the top of the image, with the defender being in a good position to track his run. However, as the shot comes in, he loses his man far too easily and once it is spilt by the keeper, it was a simple finish for the winger. 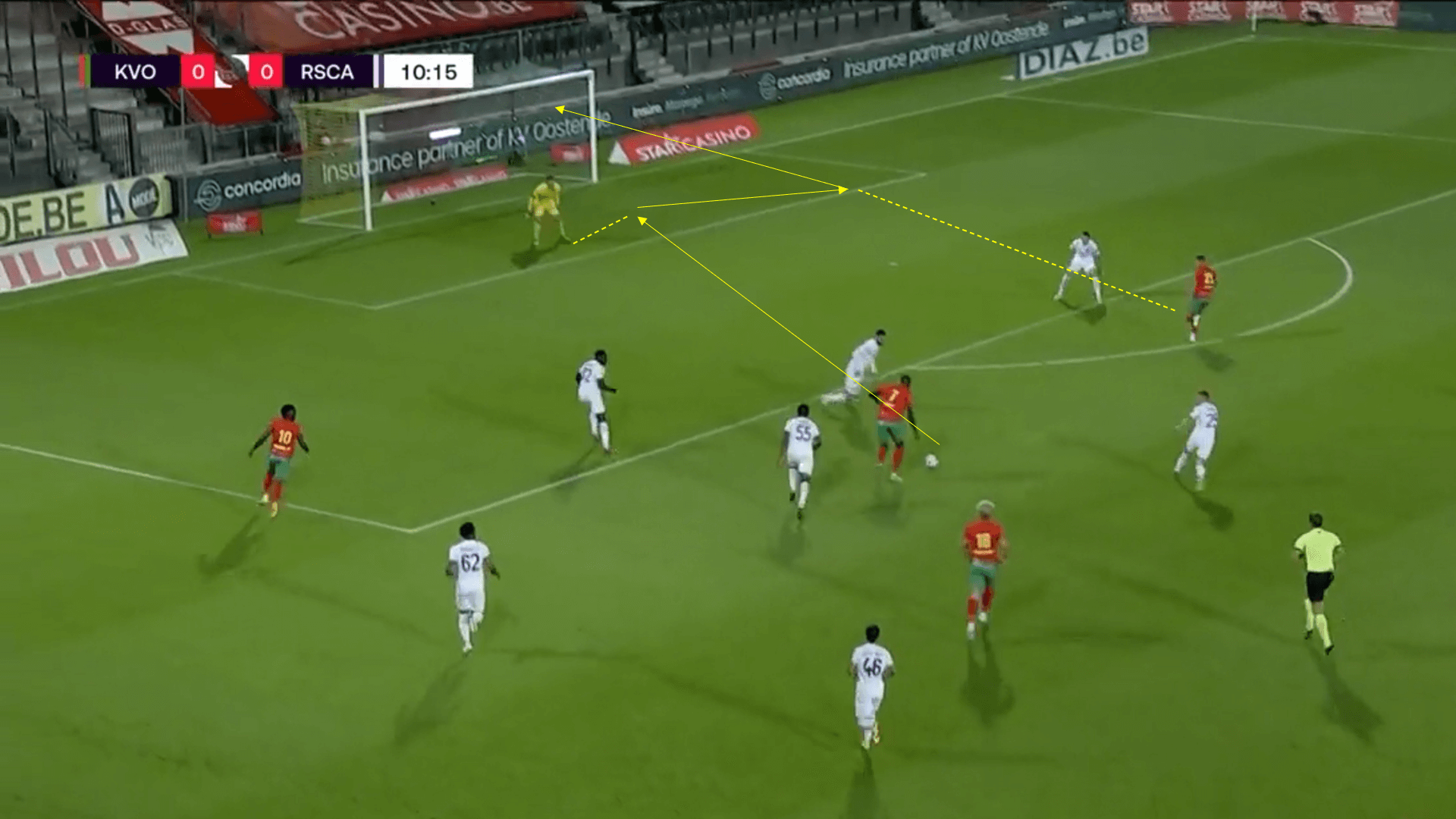 This first goal was a direct consequence of the high-intensity press Oostende deployed early on. They really took the game to the away side and were able to put them under plenty of pressure and force mistakes.

Despite the space being offered in behind the defence, Anderlecht really struggled in the first 20 minutes to exploit it. Oostende were able to deal reasonably well with any attempts to put the ball over the top, due to the lack of quality on the passes. The home side were also happy to allow the team from Brussels to play the ball around the back, deep in their own half after they scored the opener. Despite having 64% possession in the first 20 minutes, Anderlecht had only managed one shot on goal.

In plenty of times during the first half, Anderlecht were found in the situation that we see below, with one of the two centre-backs being on the ball, and the middle of the pitch being congested. We see that the space is in the wide areas, where both wingers have space to get in behind. Doku was the focal point, and it was clear that Anderlecht wanted him on the ball as often as possible. Unfortunately, most of the balls played to Doku were either overhit or went to him rather than into the space that he wanted to run into. 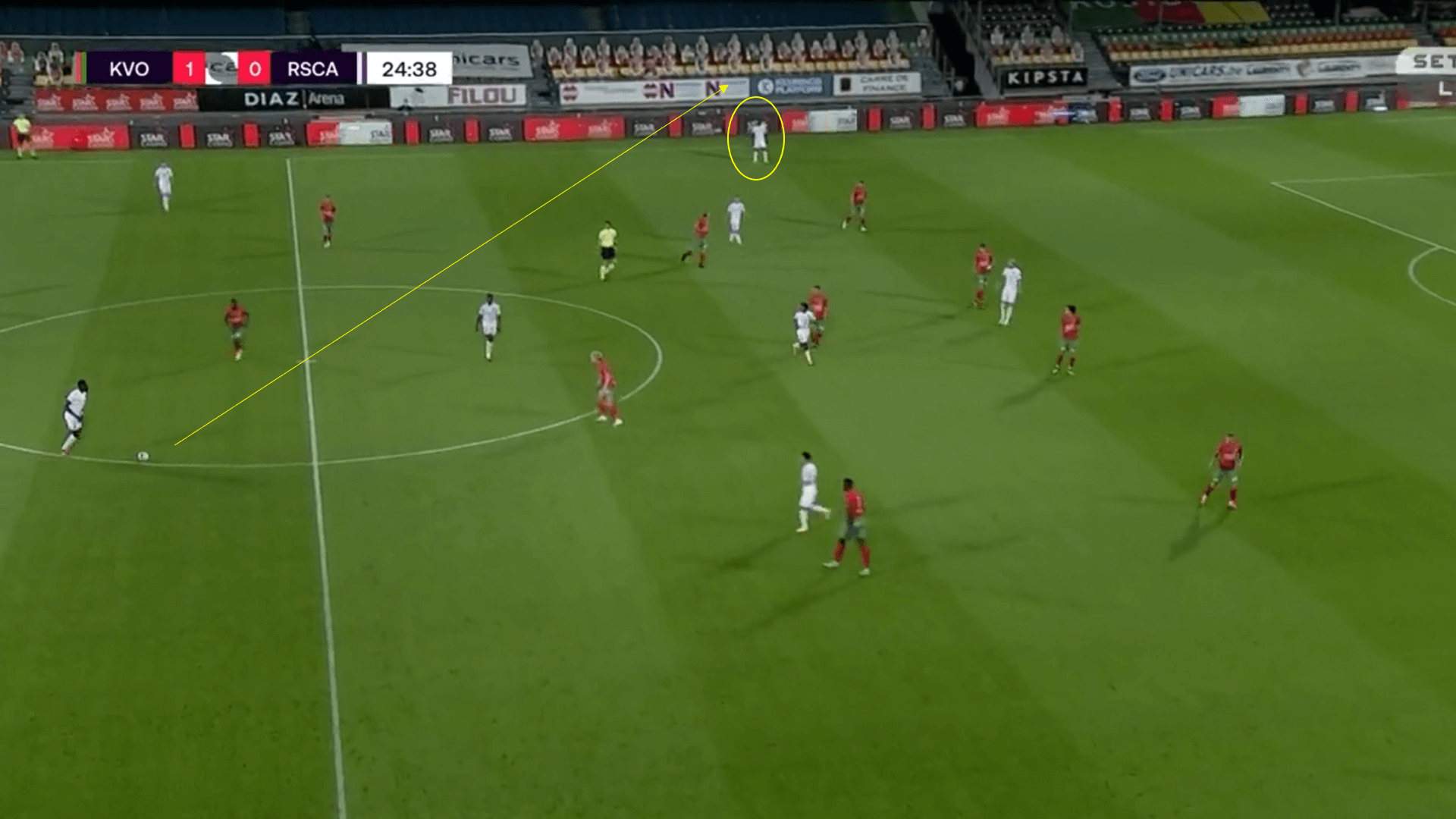 Another problem Anderlecht faced when trying to get Doku on the ball more was that Oostende had clearly done their homework, and wanted to put plenty of defenders around him. When passes did find his feet, it ended up with him being fronted by two or three of the home side’s defenders, making it very difficult for him to use his excellent dribbling ability. In one-on-one situations, Oostende knew that the opposition could beat their defenders. By doubling, or even tripling up on him, they forced the ball out of his feet and slowed the game tempo right down. 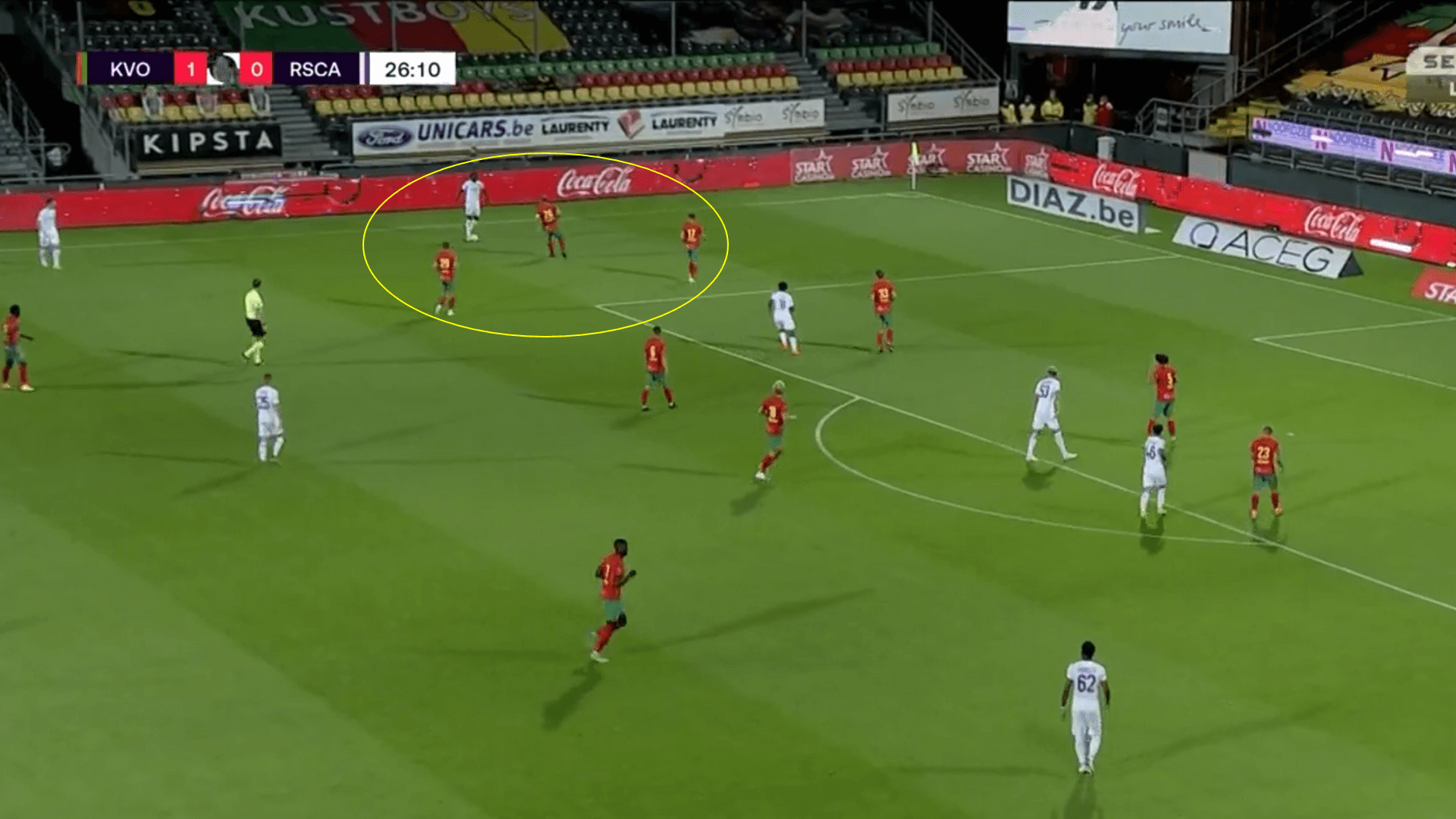 Anderlecht’s struggles in the first half meant that they were 2-0 down inside 34 minutes, despite dominating possession. It took a wonder strike from Trebel to get them back into the game before half time.

New signing Lukas Nmecha, on loan from Kompany’s old club City, was brought on at half time to try and give Anderlecht more of a presence up front. Percy Tau was also moved to the right wing position. Both changes gave Anderlecht a greater attacking impetus, with them having almost as many chances in the first five minutes of the second half than they had had in the first half.

Nmecha in particular gave them a greater threat in behind, something that Anderlecht had struggled to exploit in the first half with all the space being offered behind the Oostende defence. Furthermore, he was able to put pressure on the backline with his willingness to press and run at them with the ball.

These two changes, moving Tau to the right wing and bringing on Nmecha, were key in getting Anderlecht level. Firstly, Nmecha was well-positioned to intercept a poor pass from Oostende in their own half. Having won the ball back, Nmecha shows poise and composure to bring the ball forward and run at the defenders, forcing them onto the back foot before finding Tau. 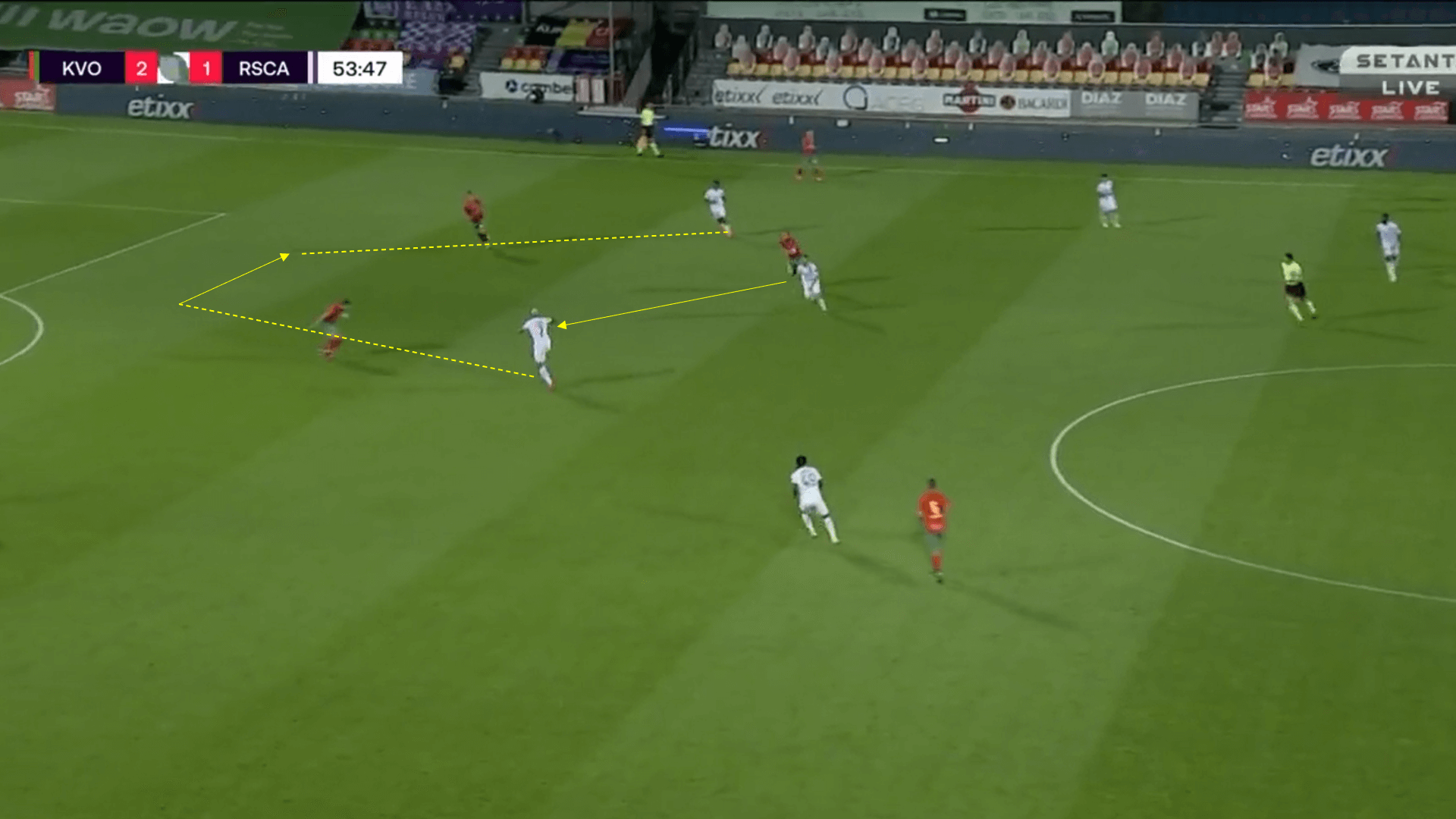 Having moved Tau to the wing, he is able to get on the ball in areas such as this, where he can isolate defenders one-on-one and use his dribbling ability. Furthermore, we see how Nmecha’s willingness to run in behind has dragged defenders out of position, leaving a substantial gap at the heart of the defence. With Doku in space on the left, Hjuslager is stuck with either covering the space and leaving Doku free, or trying to cover both areas. 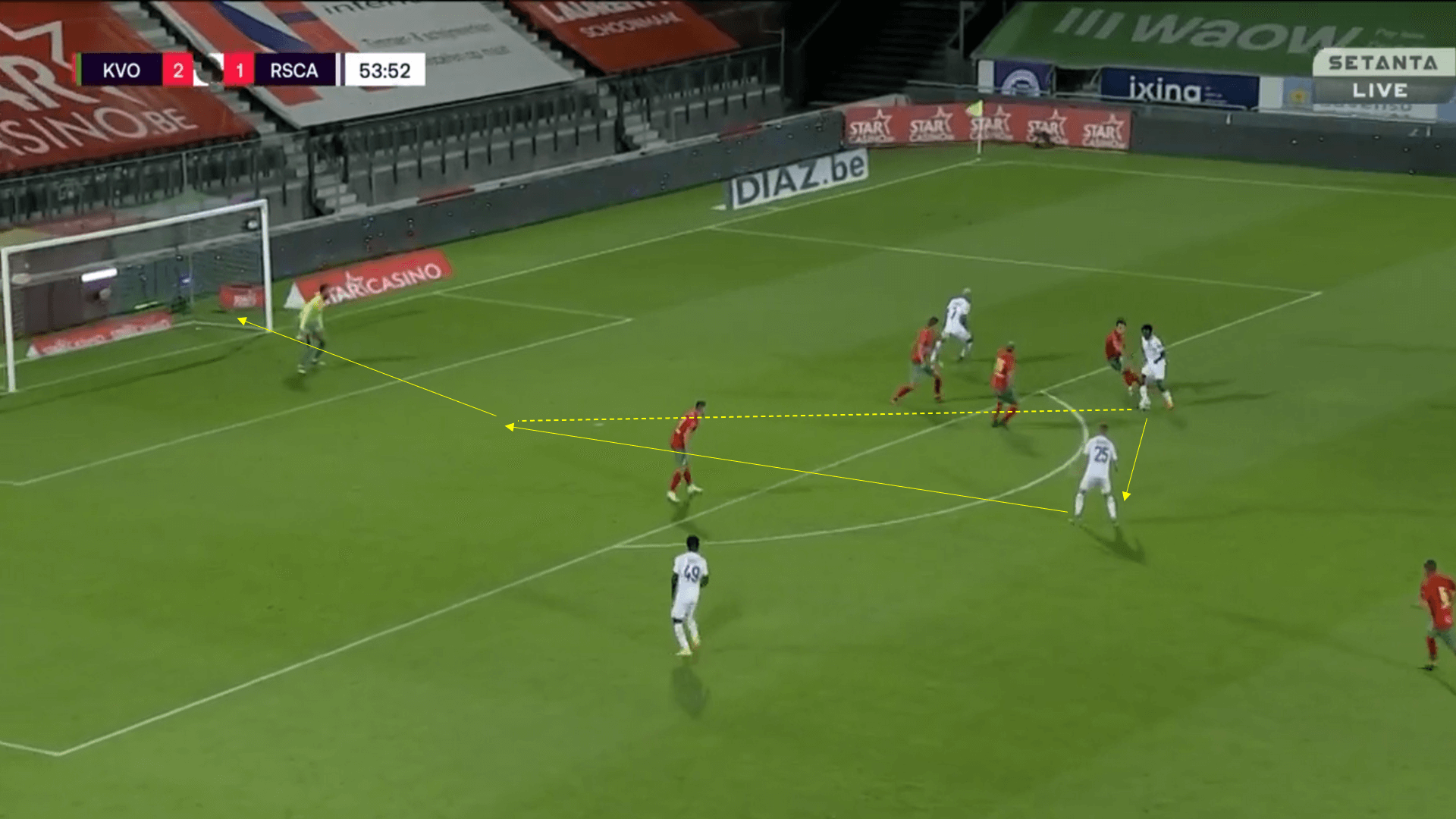 Tau, coming in off the left, is able to play a simple one-two and exploit the space left by Nmecha. Tau was not getting in these positions in the first half, and Kompany should take credit for making changes at half time. Oostende will certainly have been frustrated that it was a mistake that led to the equaliser, especially coming so soon into the second half.

Anderlecht continued to dominate possession but were unable to find the winning goal. Both sides will more than likely be disappointed with the result. Oostende have failed to win a game this season, despite some positive performances. Having gone 2-0 up and being relatively comfortable, they would have wanted to see this game out.

Anderlecht, on the other hand, will have been frustrated that they once again drew a game, having had plenty of possession, but not much penetration in the first half. The second half performance would have been more encouraging for them. Kompany may well go with the formation and personnel he deployed in the second half, as they looked far more threatening than the first half side he put out.