Eintracht Frankfurt: Can they come back to Europe again? – data analysis

It was a season with ups and downs again at Frankfurt. Ending the Bundesliga season in ninth, Eintracht Frankfurt did not qualify for the UEFA Champions League or Europe League. Adding to that, they were eliminated by Basel in the Europe League’s round of last sixteen matches. Nevertheless, they participated in the DFB-Pokal semi-finals but they lost against Bayern Munich and therefore, they will not play in Europe competition next season. However, that should change again. Adi Hütter and his team want to come back to Europe by qualifying in the Bundesliga.

In this data analysis, we will take a closer look at Eintracht Frankfurt´s squad, their players´ data and statistics. Furthermore, this analysis will provide you with Frankfurt´s playing style.

First of all, we will look at the squad structure and the width within the team. As you can see in the image below, Eintracht Frankfurt´s current squad list has 33 names. It is outstanding, that eight of these players are centre-backs, seven are central midfielders and six are strikers. Another thing to mention is, that Frankfurt often play with a back-three and therefore, they use wing-backs (seven are in the current squad) instead of full-backs. That is why they also play without typical wingers. That is why the squad seems to be very unbalanced. Nevertheless, for the system with a back-three, Frankfurt do not need wingers and need to have lots of centre-backs, midfielder and strikers. 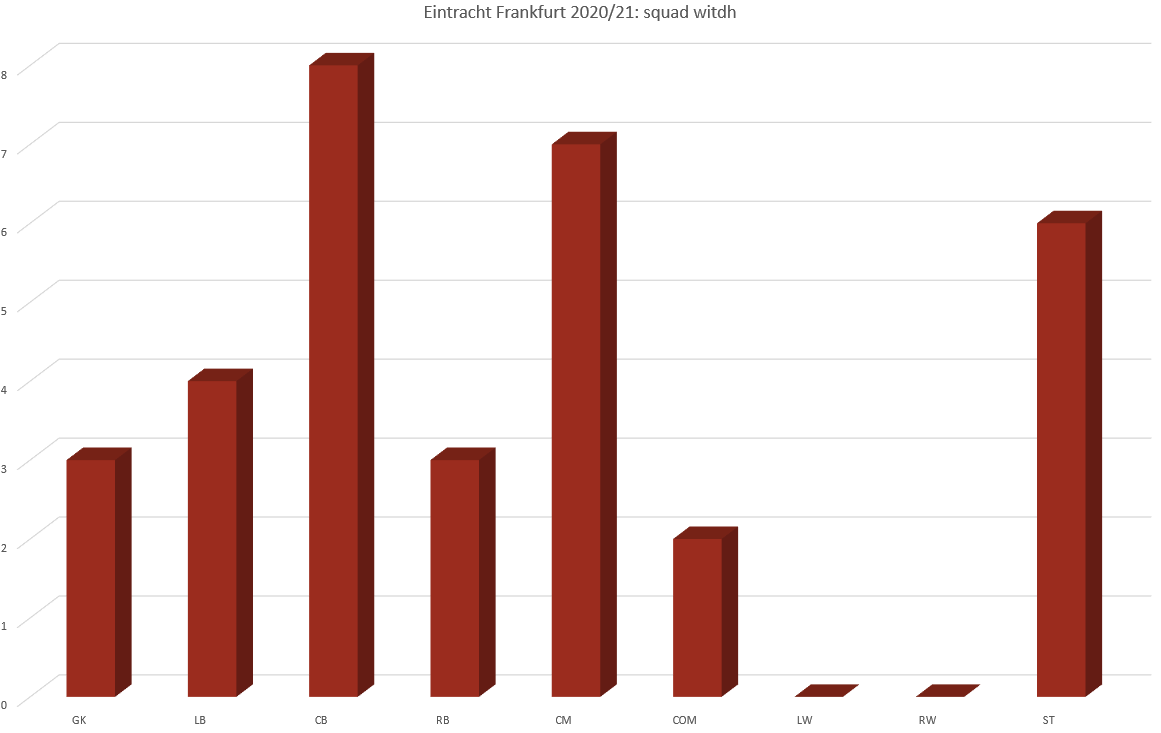 Felix Wiedwald (30), Frederik Rönnow (28) and Kevin Trapp (30) are all three in the peak of their career. They are all experienced goalkeepers and with Trapp and Rönnow, Frankfurt have two goalkeepers of a good Bundesliga standard. Even if Frankfurt conceded lots of goals last season, and Trapp is less than average compared to other goalkeepers of Bundesliga top clubs, he is a solid last man. His cross stopping is outstanding as he is the best Bundesliga goalkeeper in this category (10%). 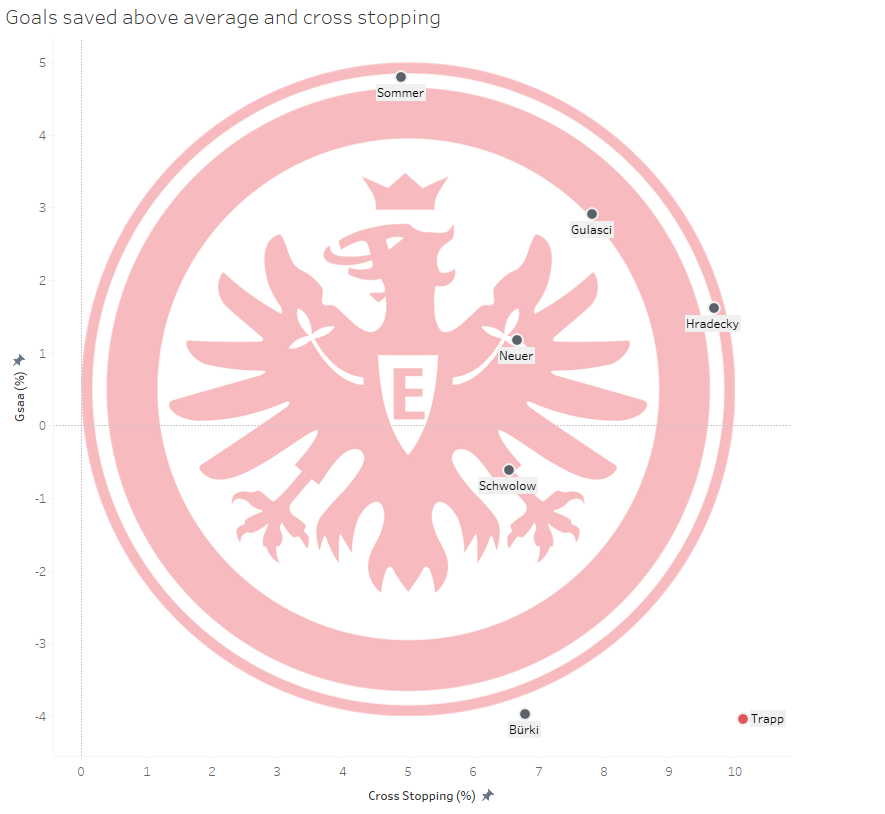 Most players of Frankfurt´s squad are playing in central defence. As they play with a back-three most of the time, they will have enough options to rotate during the whole season. Evan N´Dicka, Martin Hinteregger and David Abraham seem to get the places in the starting eleven. Simon Falette and Stefan Ilsanker are back-ups on high Bundesliga niveau. With Tuta (21), Fynn Otto (18) and Yannick Brugger (19) three talents might get some playing minutes. As you can see in the image below, N´Dicka, Ilsanker, Hinteregger and Abraham are similar player types providing each 4-5 clearances per 90 minutes. Hinteregger is very dangerous in offensive aerial duels. That is why he was the best goal-scoring centre-back (8 goals, 2 assists) in Bundesliga last season. 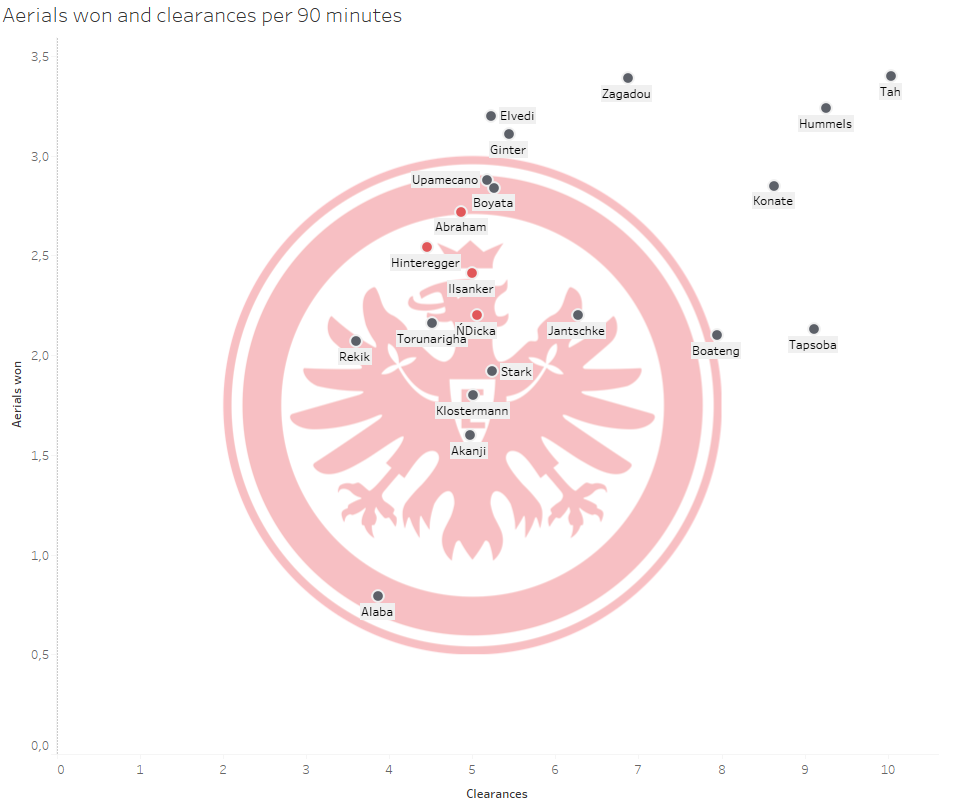 To compare Frankfurt´s wing-backs with similar players in Bundesliga, we had to compare them to full-backs as well. That is why we used the progressive distance and successful pressures per 90 to find out where Frankfurt´s players rank. As you can see, almost all of them are weaker compared to other wing-backs and full-backs in Bundesliga. Even new signing Steven Zuber, does not rank high in the comparison. Nevertheless, Erik Durm provides the third-most successful pressures (6,25 per 90 minutes). Filip Kostic seems to meet the Bundesliga standards. Adding to that, he provided 16 goal contributions (4 goals and 12 assists) in the last Bundesliga season and therefore, he is essential for Frankfurt´s game. 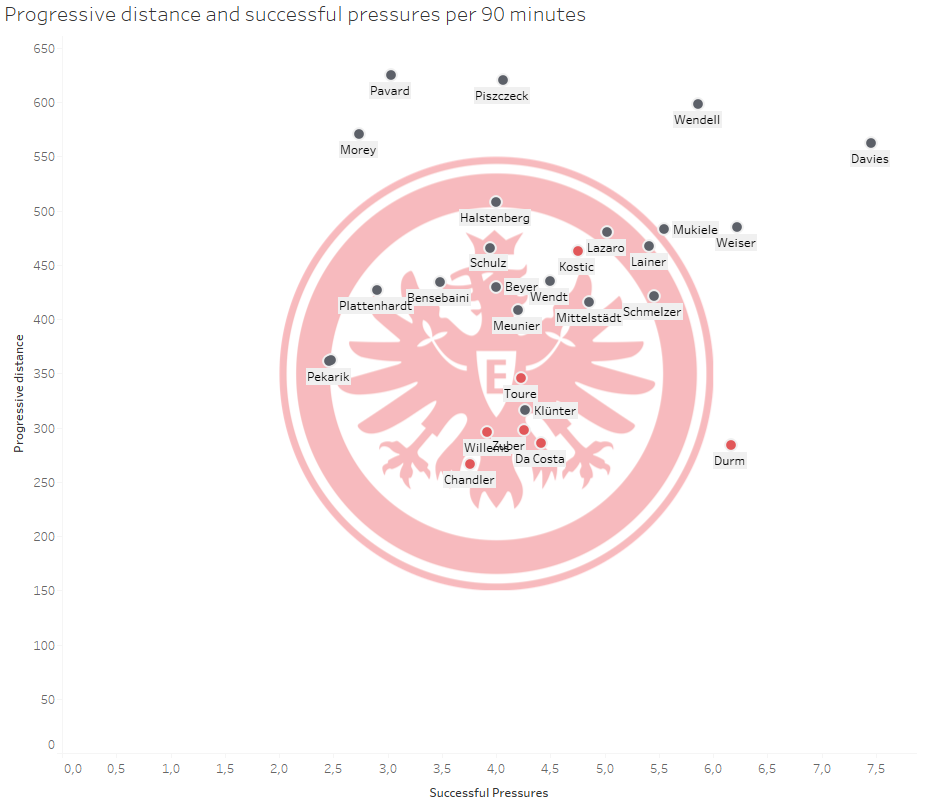 Sebastian Rode and Dominik Kohr seem to get a place in the starting eleven as they were long runners last season already. Makoto Hasebe is a good alternative and provides a high percentage of successful passes. Because of his age of 35, he will not be able to be a regular starter next season. Another good back-up is Djibril Sow who provide more interceptions than Rode and he has a more successful passing rate than Kohr. Nevertheless, as he is a more offensive player, Kohr and Rode are very likely to play more often. Nils Stendera (19), Marijan Cavar (22) and Lukas Fahrenberger (19) will play no big role probably. 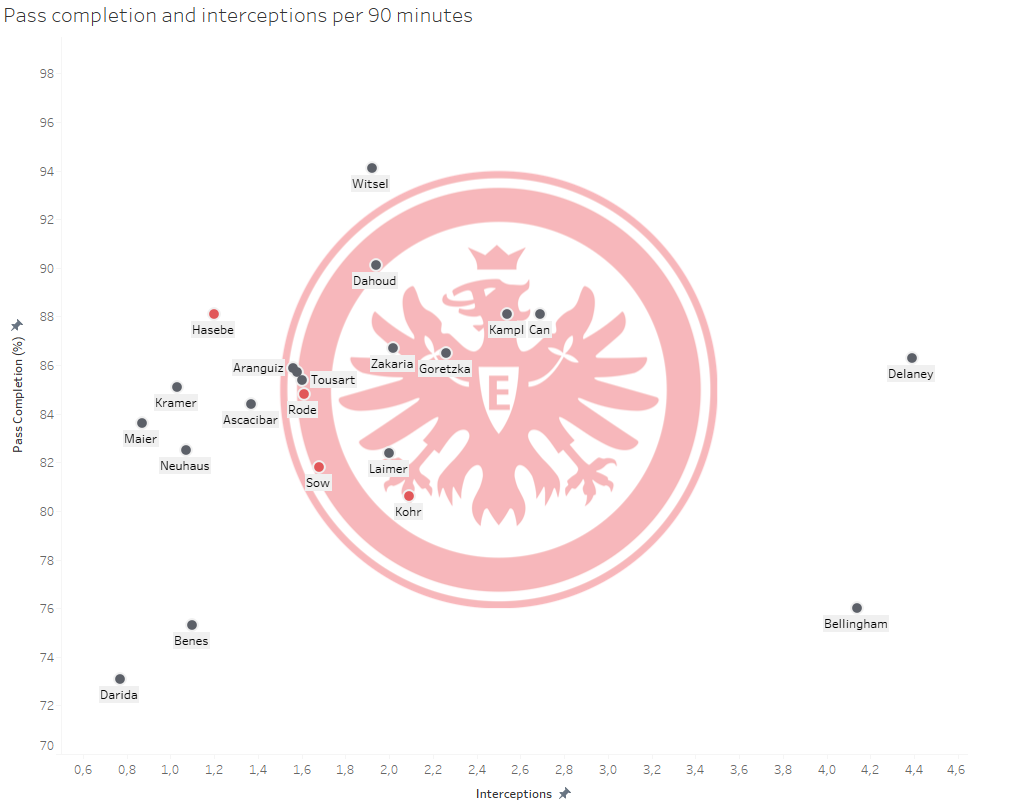 Aymen Barkok (returns from loan at Düsseldorf, 22) and Daichi Kamada (24) will play in more advanced positions on the pitch. They are the only two option in Frankfurt´s squad who can play in central offensive midfield. Kamada played well last season and seems to be a regular starter next season again. His contributions to goal-scoring opportunities is quite high (3,2 per 90 minutes) and his creativity is needed in the midfield as Rode and Kohr are responsible for defensive actions and therefore, limited in their offensive game. 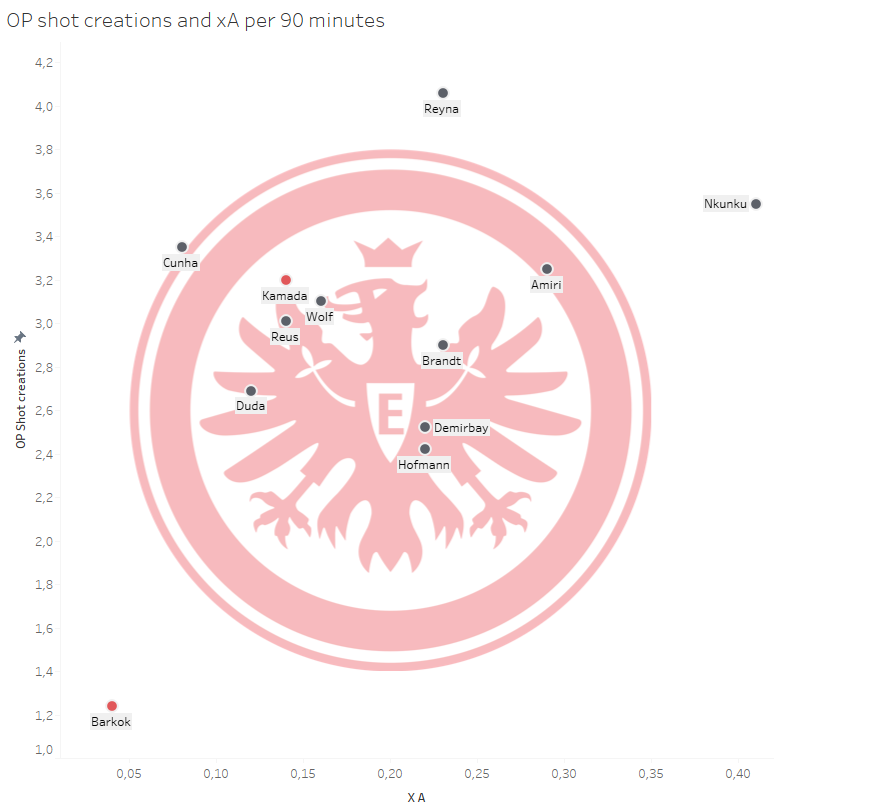 In Frankfurt´s current squad are six forwards. Three of them are experienced players and definitely have a high Bundesliga niveau: Bas Dost (31), Andre Silva (24) and Gonçalo Paciência (27). Hütter might line up his team with two strikers. Even if Dost provides the highest conversion rate, Paciência (technically gifted, hard working) might get the starting place next to Silva. Silva was arguably as important as Kostic for Frankfurt last Bundesliga season as he scored 12 goals and assisted four more goals. Dejan Joveljic (21) is about to be loaned out for another year. Jabez Makanda (from their own academy, 19) and Ragnar Ache (from Sparta Rotterdam, 22) are promising talents who will surely get playing minutes this season. 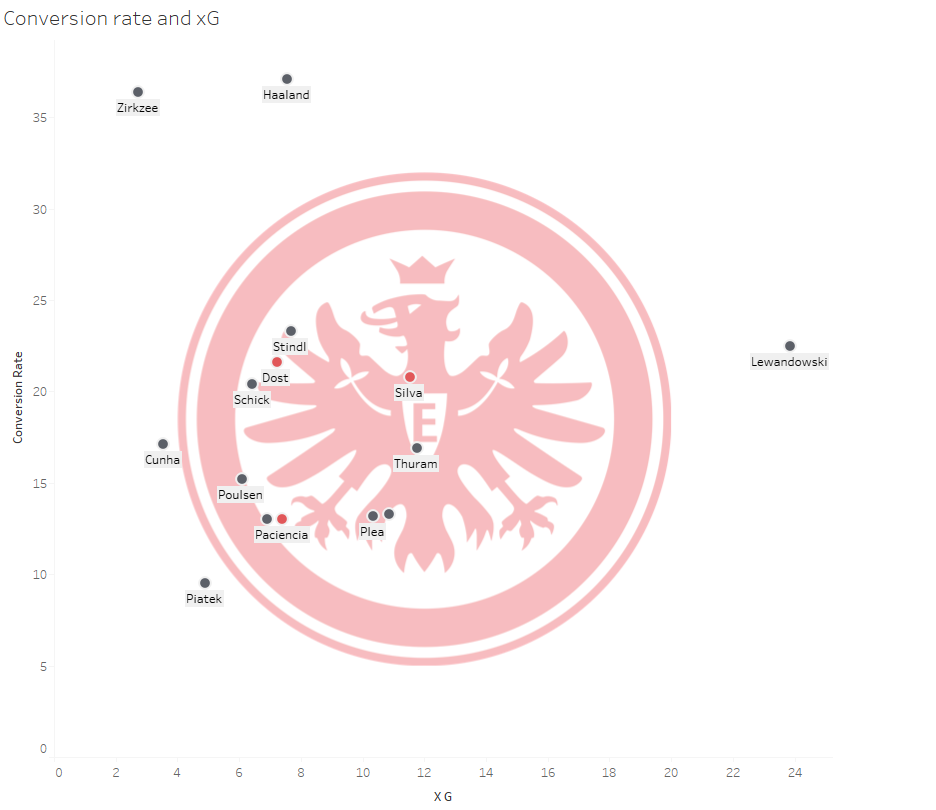 Frankfurt´s most used system last season was the 3-4-1-2 formation. It is very likely, that they will continue playing this system next season as well. Abraham, Hinteregger and N´Dicka form the back-three in front of Trapp. Kostic and Almamy Touré will be the wing-backs who are so important for Frankfurt. In midfield, Kohr and Rode will be responsible for the defensive part whereas Kamada can use his creativity in a more advanced position on the pitch. Paciência and Silva are the favourites of the places up front. 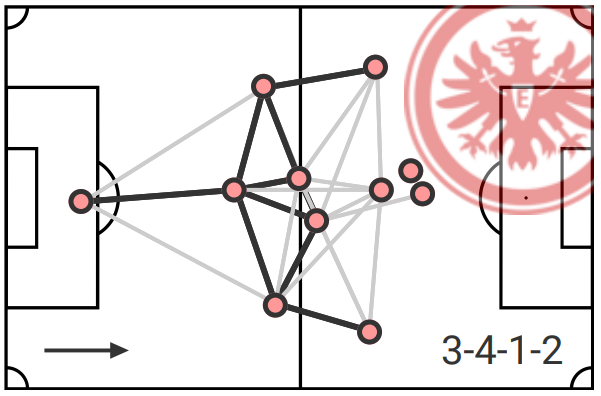 This season, there will be no international football in Frankfurt. However, this might change next season again. Frankfurt is used to playing in a tight schedule. Adding to that they have a good squad width. Even if their individual players are rather Bundesliga average, their morale and their team spirit are unique. They will get the chance to come back to Europe again. Last season, they could not stand the triple load. Next season, they can take advantage of playing in “only” two competitions.