This tactical analysis will examine the tactics used by both Ian Russell and Rick Schantz throughout the match. The analysis will look at how Reno was able to progress through Phoenix’s press, how they exploited Rising’s left side, and how Phoenix struggled in their build-up and attack. 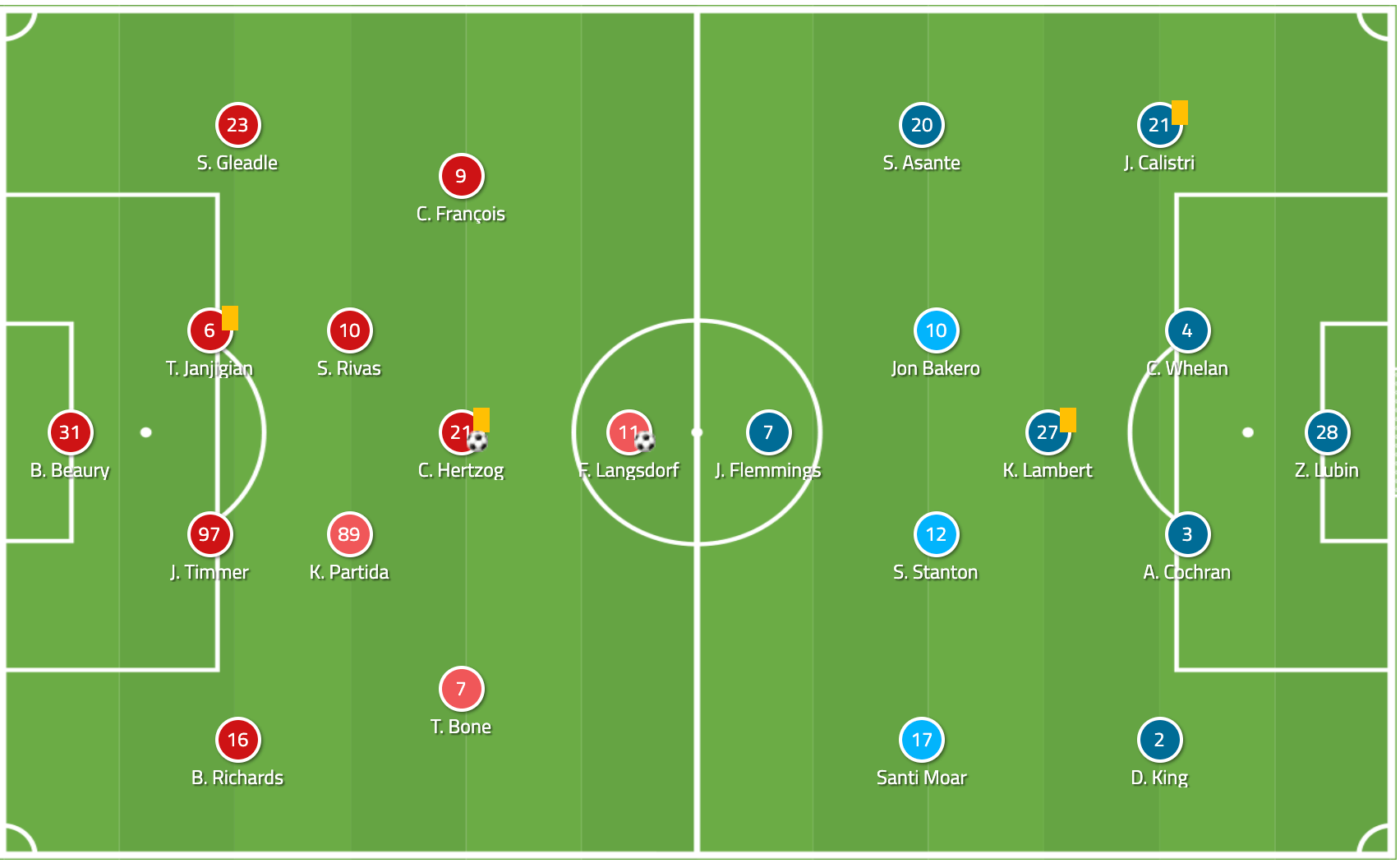 Reno 1868 came out in their 4-2-3-1 formation with Ben Beaury in goal. Sam Gleadle started as their left-back, Thomas Janjigian and Jared Timmer started as centre-backs, and Brent Richards started as the right-back. Their two holding midfielders were Sergio Rivas and Kevin Partida, while Foster Langsdorf started in front of them. Christiano François patrolled the left flank while Tucker Bone worked on the right, and Corey Hertzog, who scored the game-winning goal, started as the lone forward for Reno.

Despite looking like a 4-1-4-1, Rising played in their usual Barcelona-esque 4-3-3 with Zach Lubin in goal. Darnell King started as the left-back, with A. J. Cochran and Corey Whelen as centre-backs, and Joey Calistri as the right-back. Kevon Lambert was the holding midfielder with Jon Bakero and Sam Stanton as the other two central midfielders. The front three consisted of Santi Moaron the left-wing, Solomon Asanté on the right-wing, and Junior Flemmings as the centre-forward.

Phoenix Rising has been very successful in their pressing this year, often forcing teams to send the ball through the air, which allows them to win 50-50 balls. Rising typically use the victories in the duels to strike during the transition. While they were able to force Reno to do this once, resulting in Dadashov’s goal, most of the time Reno was able to progress through their press without much trouble. Reno clearly had a game plan for all parts of Rising’s press, including having options available beyond the initial pass to a central midfielder. 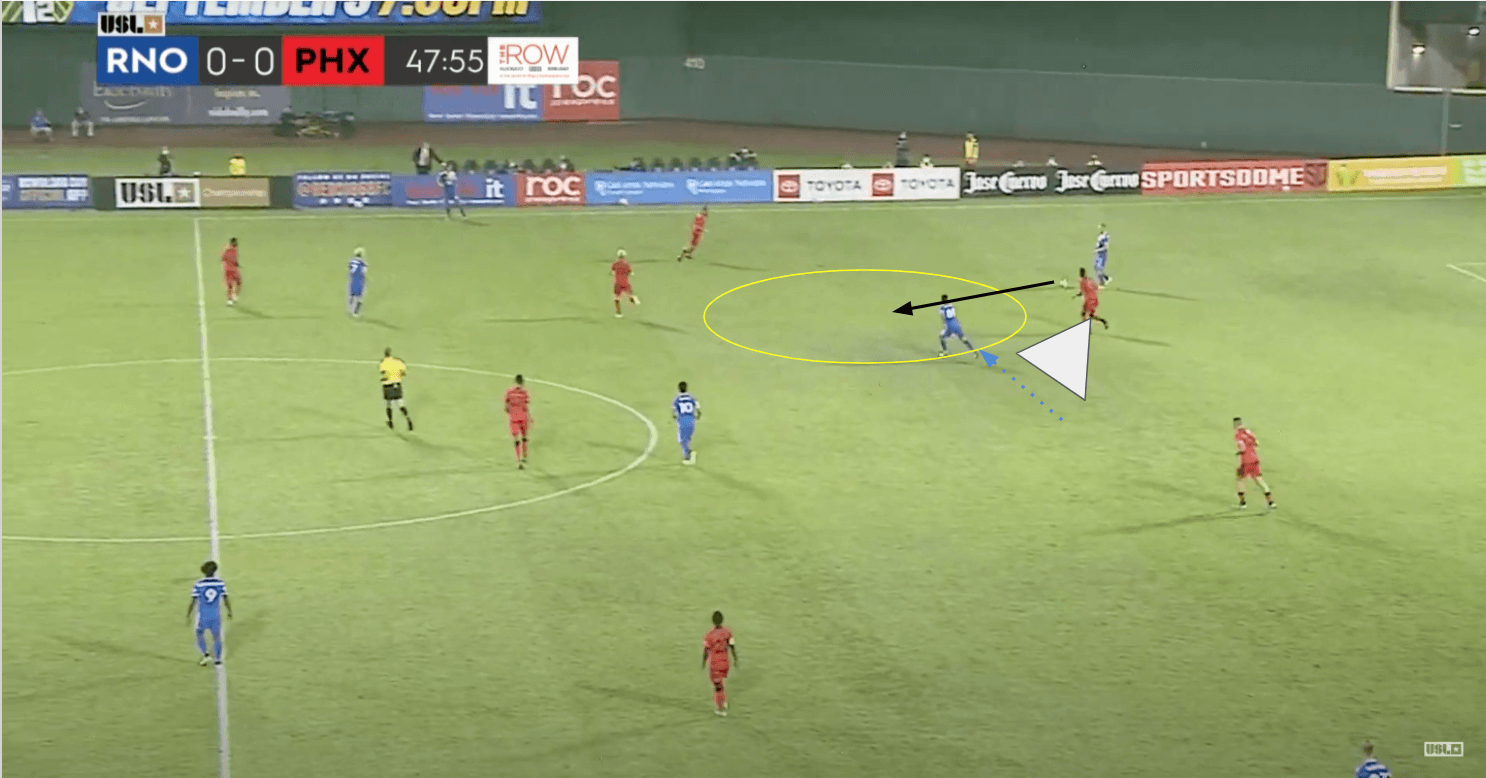 One of the big changes that saw Reno find some success is that Junior Flemmings was playing as the centre-forward as opposed to Dadashov. While Dadashov is excellent in using his covershadow to prevent a defensive midfielder from receiving the ball, Flemmings struggled to do the same. In the instance above, Flemmings was trying to prevent Kevin Partida from receiving the ball. Partida did well to wait until Flemmings went to close down the centre-back, then went off of his shoulder into the available space. Partida was able to receive on the turn, and spray a pass out wide to Brent Richards. Richards was already in behind most of the Rising defence, with only the back line to beat. Partida’s movement behind Flemmings had to be well-timed in order for the move to work. Partida had to read both Flemmings’ movement as well as the potential space he was moving into to make sure that he could arrive in that space at the correct time. 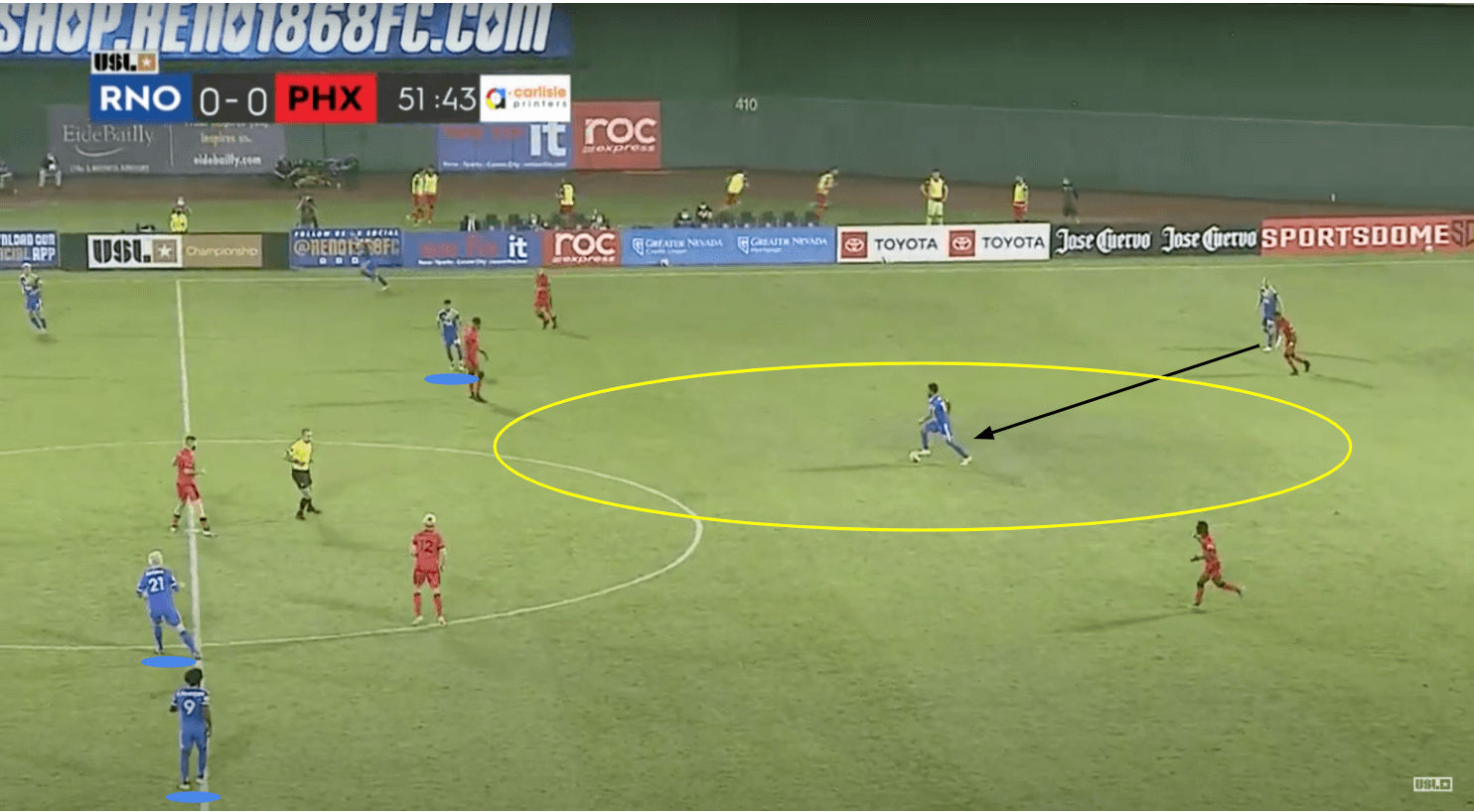 Reno were also able to slow down some of Rising’s pressing by having their midfielders start higher up the pitch when building from the back. The image above looks incredibly similar to the previous image, although this time Sergio Rivas was dropping to receive the ball. The other central Reno players were positioned on the midfield line. This forced the second defensive line of Phoenix to stay put. By creating more room vertically, the midfield line of Rising’s defence was unable to commit to pressing immediately, as they would have been left exposed with a long recovery run. When the closer pass wasn’t an option, Reno was able to rotate in order to create a free man. 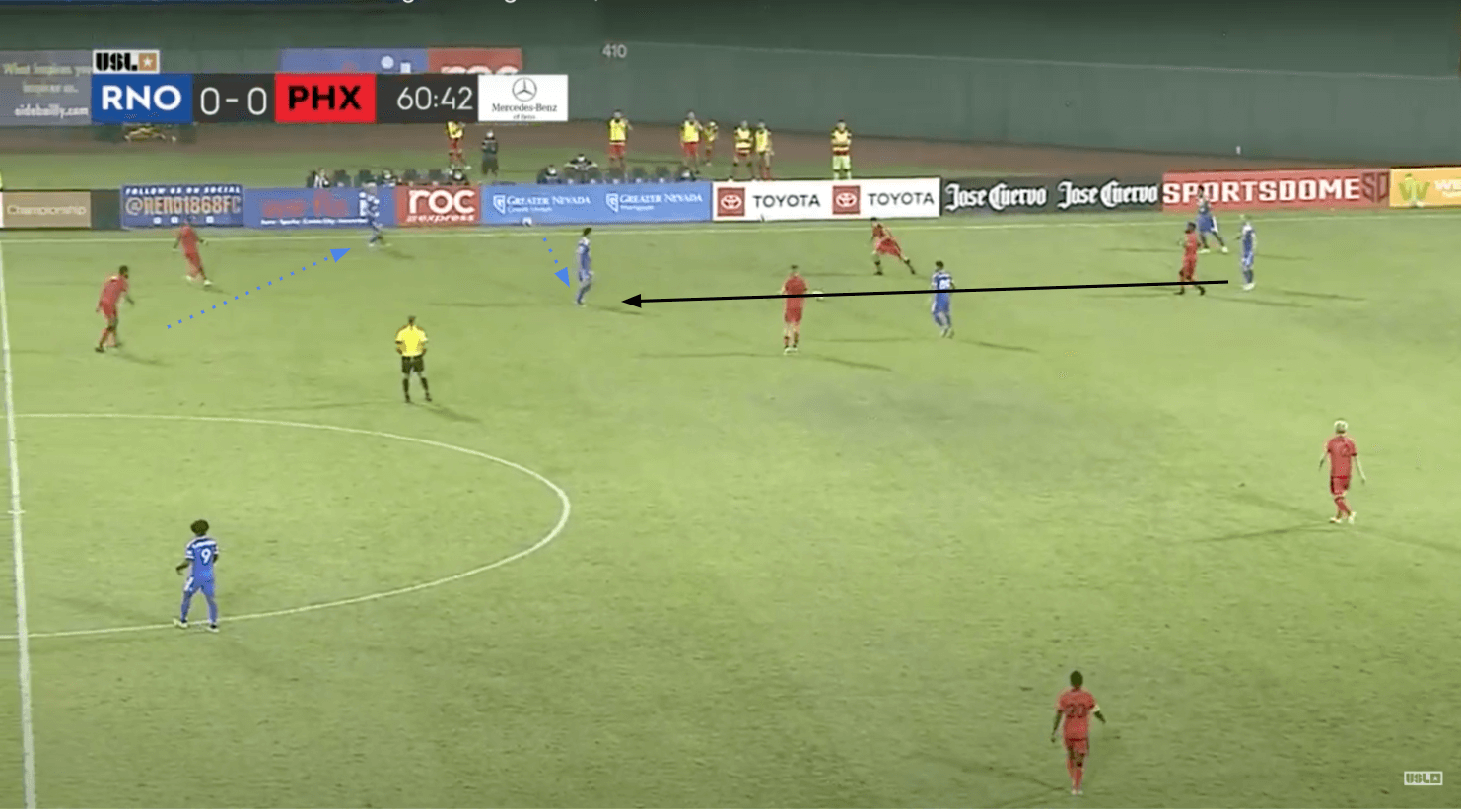 In the instance above, Phoenix had done a good job preventing the pass into Partida. However, Richards slid inside in order to receive the ball. As he moved inward, Tucker Bone moved to the flank. This ‘froze’ the Phoenix defenders, allowing Richards to receive the ball on the turn. Richards took his first touch inside and was able to curl a pass over Rising’s right-back, putting Sam Gleadle into space with plenty of time to settle the ball down. Ultimately Gleadle wasn’t able to deliver a solid cross, but the ease with which they progressed through Rising’s press was certainly encouraging for Reno.

One of the areas Reno looked to attack was down their right side. They especially looked to take advantage of that space when Darnell King would push up the pitch. King and Santi Moar should have been rotating consistently, with Moar dropping whenever King would push forward. However, there were times that Rising took a risk by sending King higher up the pitch without much coverage behind him. 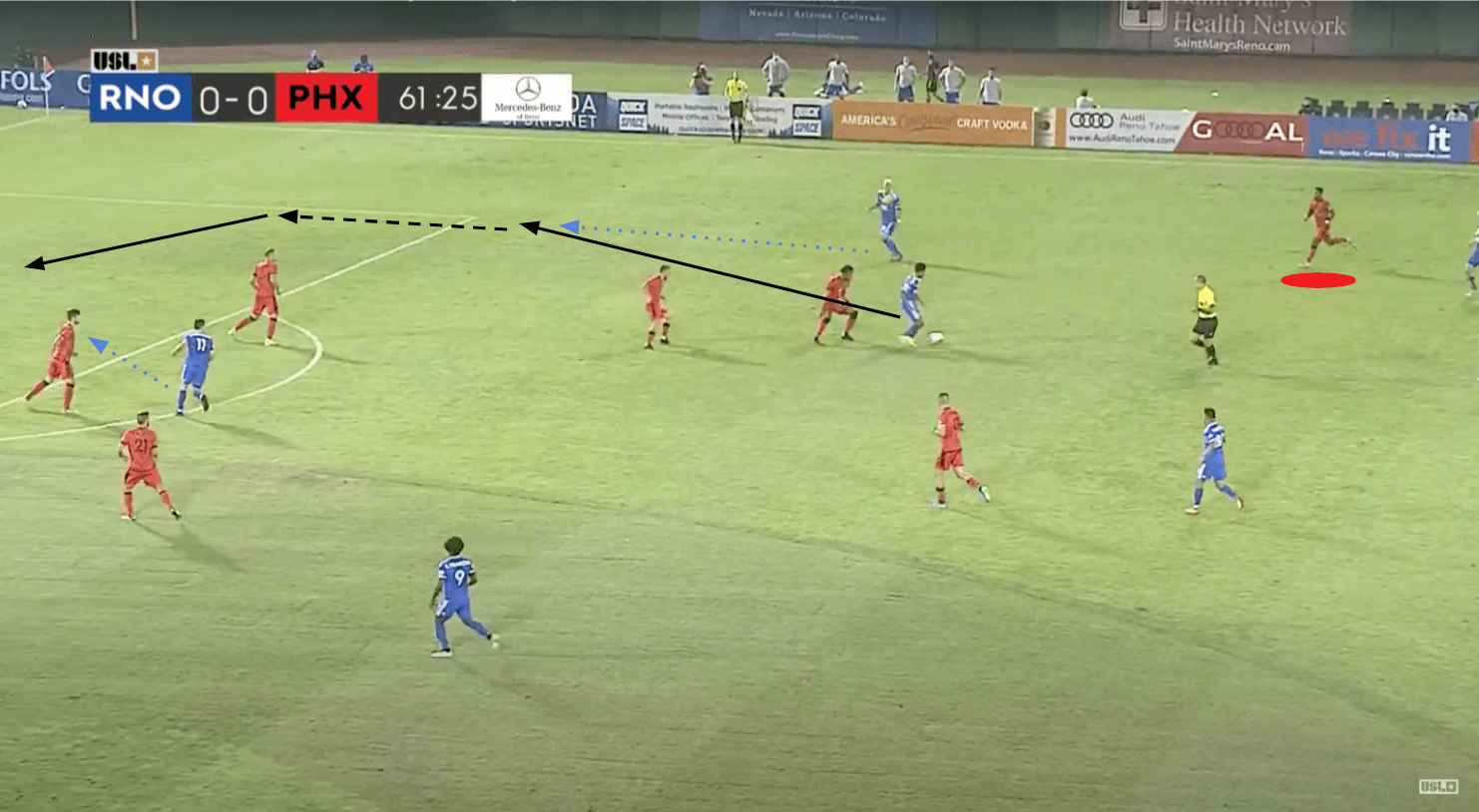 Reno’s first goal came from a Phoenix turnover in the centre of the pitch. Santi Moar was dispossessed in the centre of the pitch. King had pushed up to supply the width for the squad, but he was on the same line as Moar was when he lost the ball. Moar recovered, but he did so centrally, leaving a large amount of space open on the right side. Corey Hertzog stayed in that space as he played a pass centrally. Rivas was able to turn and face the goal, slotting the ball to Hertzog in the process. Hertzog was able to dribble as Foster Langsdorf made his run in between the centre-backs, finishing off Hertzog’s free cross. King, who is marked in red, was unable to recover in time. 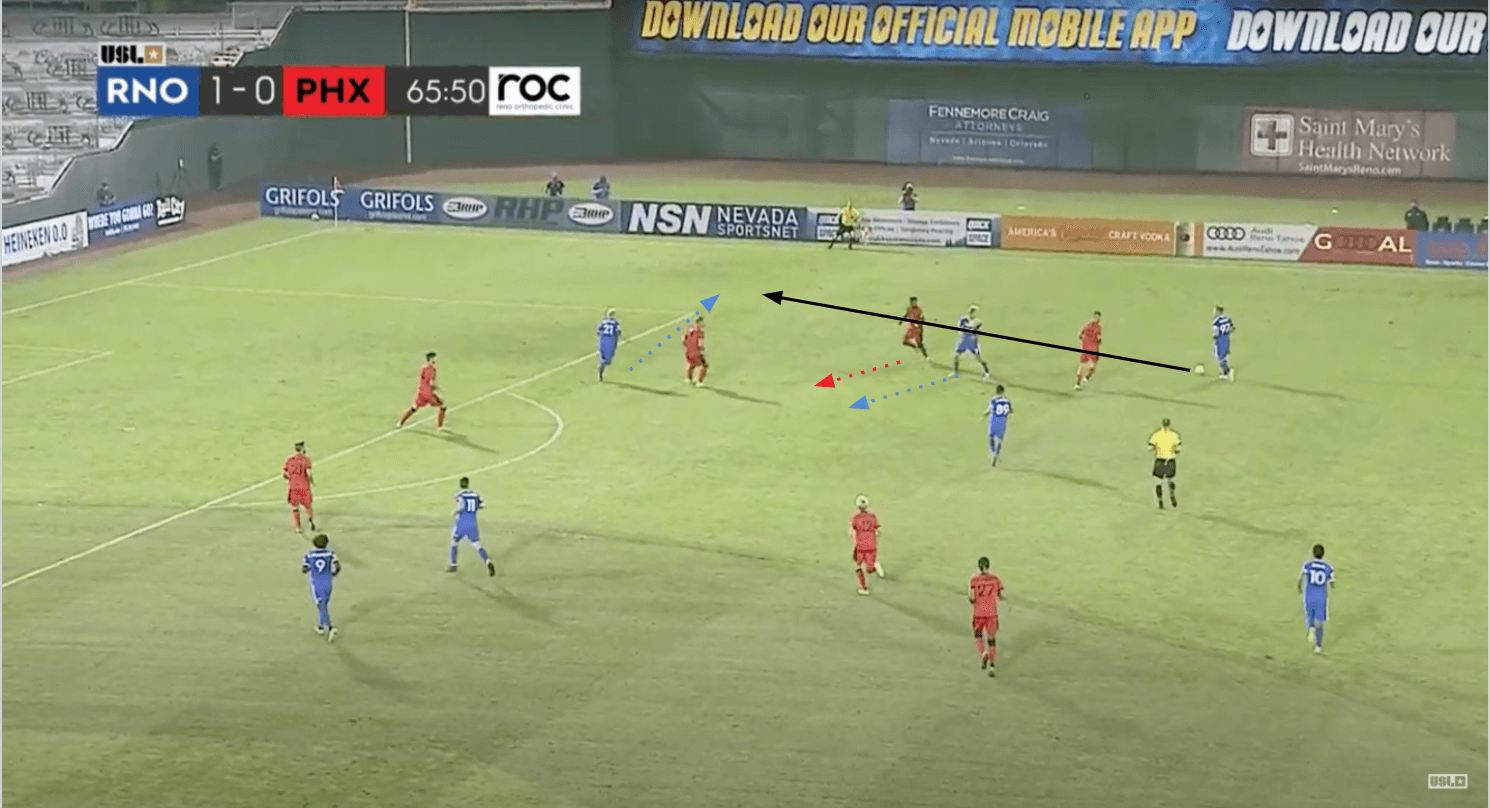 Shortly after the goal, Reno was again attacking down their right side, looking to target the left side of the Rising defence. A simple rotation worked well enough to create some space for Hertzog again. As Bone cut inside, dragging King with him in the process, Hertzog made a horizontal run to the outside, where he received the ball. King was nowhere to be found, so Cochran had to close Hertzog down. Since Cochran is slower than Hertzog, he had to close him down at a slower speed, giving Hertzog time to again pick out Langsdorf, who had created about a yard of space between himself and Calistri. This time, Phoenix narrowly escaped as Langsdorf’s header went just wide of the target. 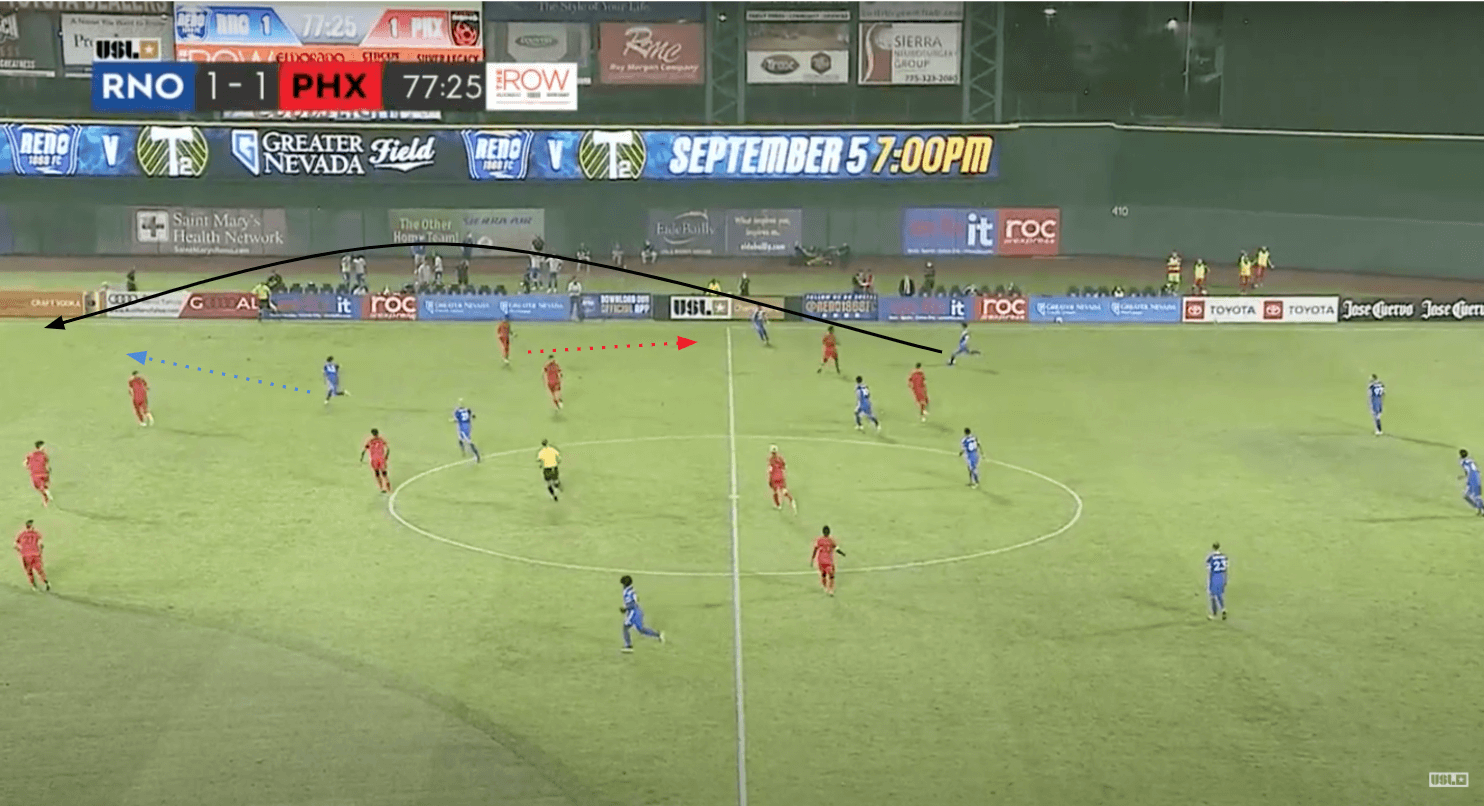 Immediately after Phoenix leveled the score, Reno again looked to exploit the Rising’s left side. From the kick off, King pushed up to pressure any potential pass that would be made towards the outside. As he did, Aidan Apodaca ran into the space between King and Cochran. Apodaca was able to find enough room to receive the ball, and suddenly he was alone with Cochran in Rising’s box. Ultimately, Apodaca opted to play the ball backwards instead of taking him on, but the problems persisted for Rising’s back four. Cochran wouldn’t be as lucky later in the match against Hertzog, who was able to create enough space to bury Reno’s second goal on the evening, securing all three points in the process.

Reno’s man-marking press certainly caused some problems for Phoenix in their build-up. In order to break these presses, teams need to rely on coordinated movements from multiple players to create and eventually make use of space. 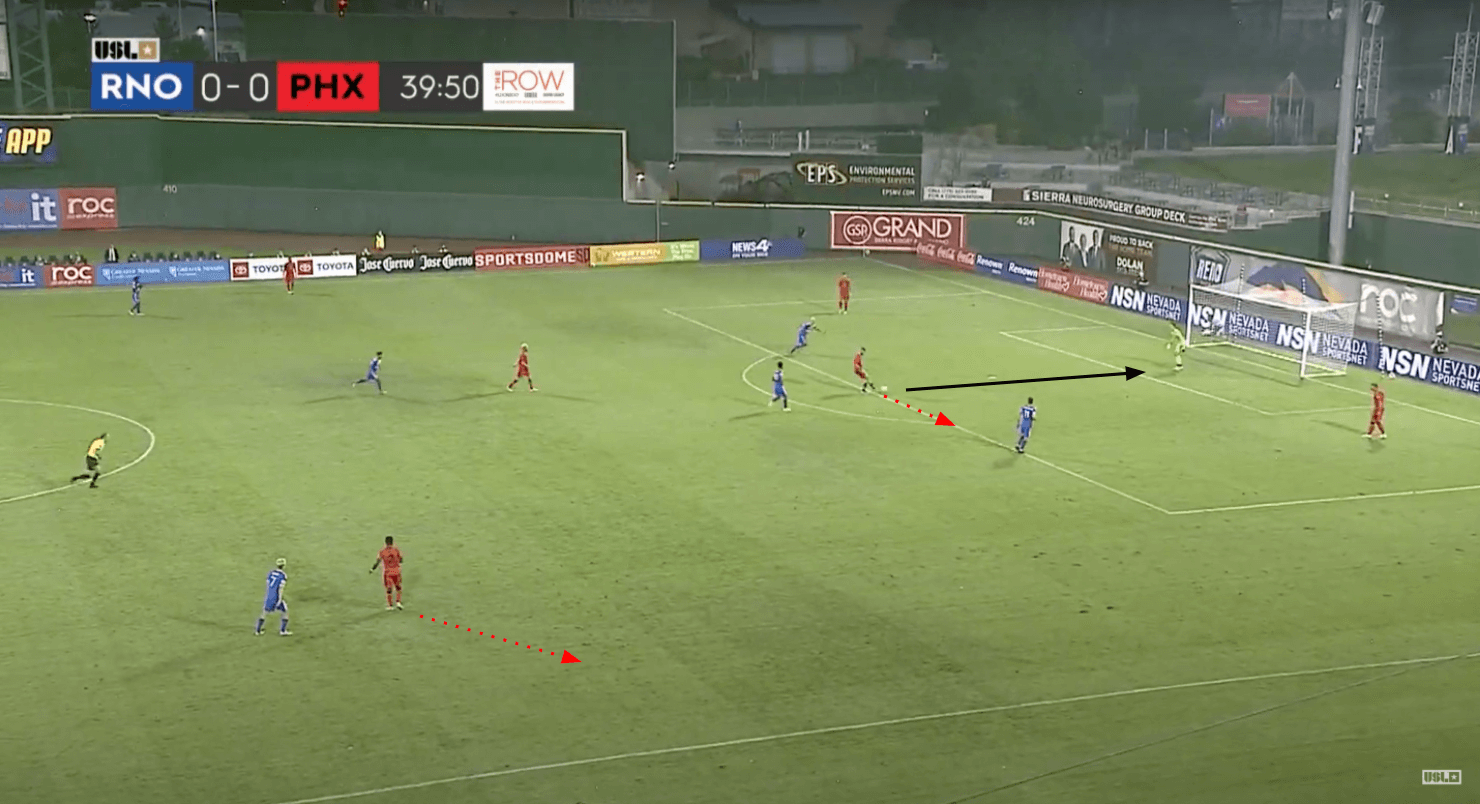 Above is an image where Phoenix was trying to play out of the back. Bakero received the ball with his back to goal, meaning the only real pass he could play would be back to Lubin. This is fine, but his movement afterwards didn’t allow for Phoenix to progress. The best way to break down a man-to-man press is with third man passes. Bakero had Stanton checking back to the ball, and he needed to open up the passing lane for him, represented by the run marked in red. Instead, Bakero stayed put, not allowing Stanton to be an option. Ideally, Lubin would have played Stanton, who could have laid the ball off for a curling Bakero, whose defender would have likely been caught ball-watching. King’s position at left-back is also questionable. He’s not providing any width for Phoenix, and he’s occupying his teammate’s space. If he also made the movement in red, he could have dragged his defender with him, opening up room for Moar to receive. Instead, the pass was intercepted as Lubin had to try to string a pass with his weaker foot. 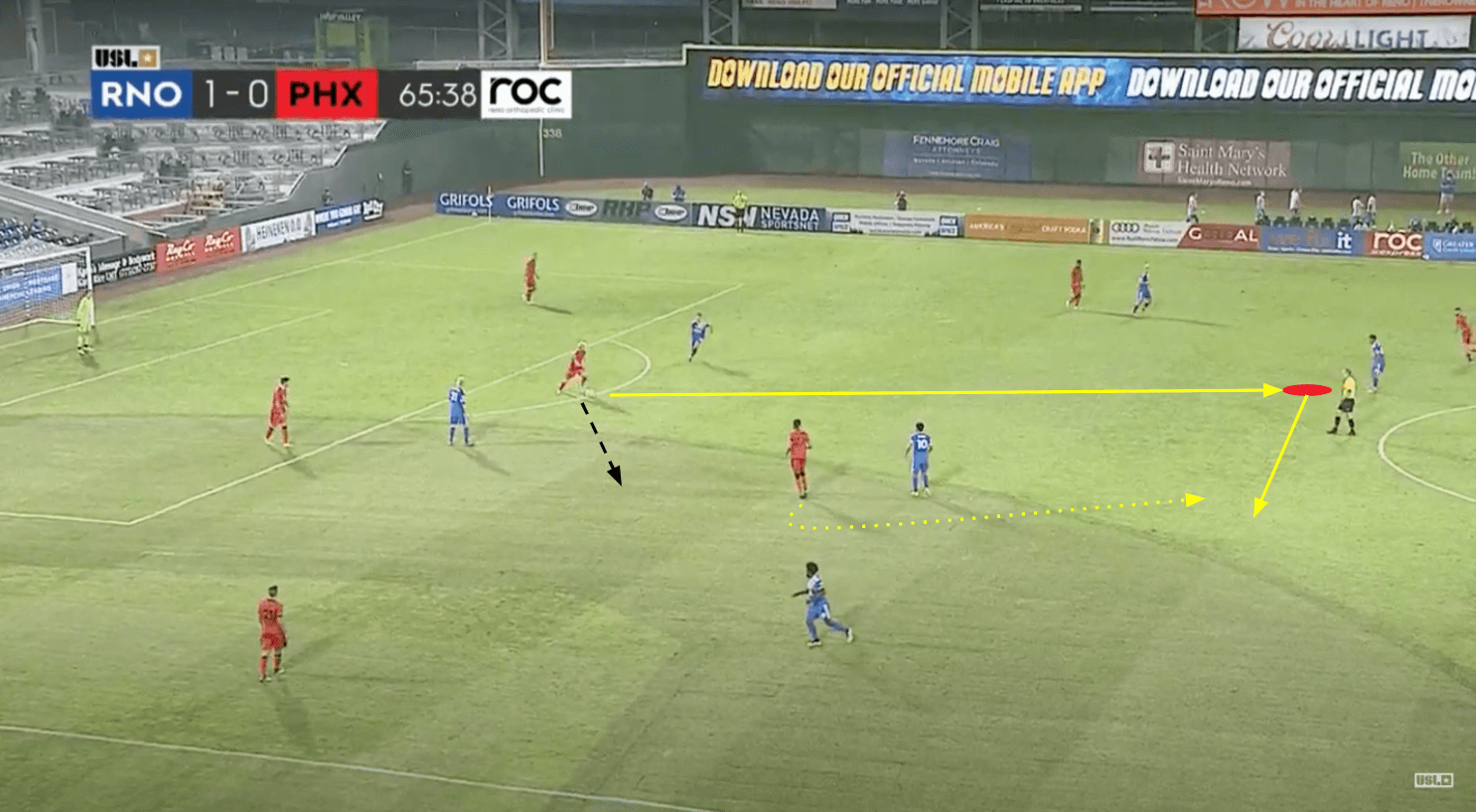 Later in the match, Phoenix was still struggling to break down Reno’s press, despite getting the ball at their midfielder’s feet. Above, Stanton was in possession, progressing past the first line of pressure. While Lambert’s positioning was certainly supportive, Bakero was too far away to be effective, as he was behind his defender. Ideally, Bakero would have been located in the red circle. This would have allowed Stanton to play into his feet. Lambert could have curled around his defender to receive the third man pass, similar to what we see Man City do consistently. Phoenix would have been in on goal; instead, Stanton had to dribble to his right, making a horizontal pass to Calistri who ultimately turned the ball over with his attempted pass.

Phoenix didn’t do themselves any favors with some of their positioning in attack. Reno certainly allowed for space to open up on the outside, but Phoenix was unable to exploit it. The balance that is so often associated with their attacks wasn’t present on Saturday night, and it became easier for Reno to defend due to the lack of width. 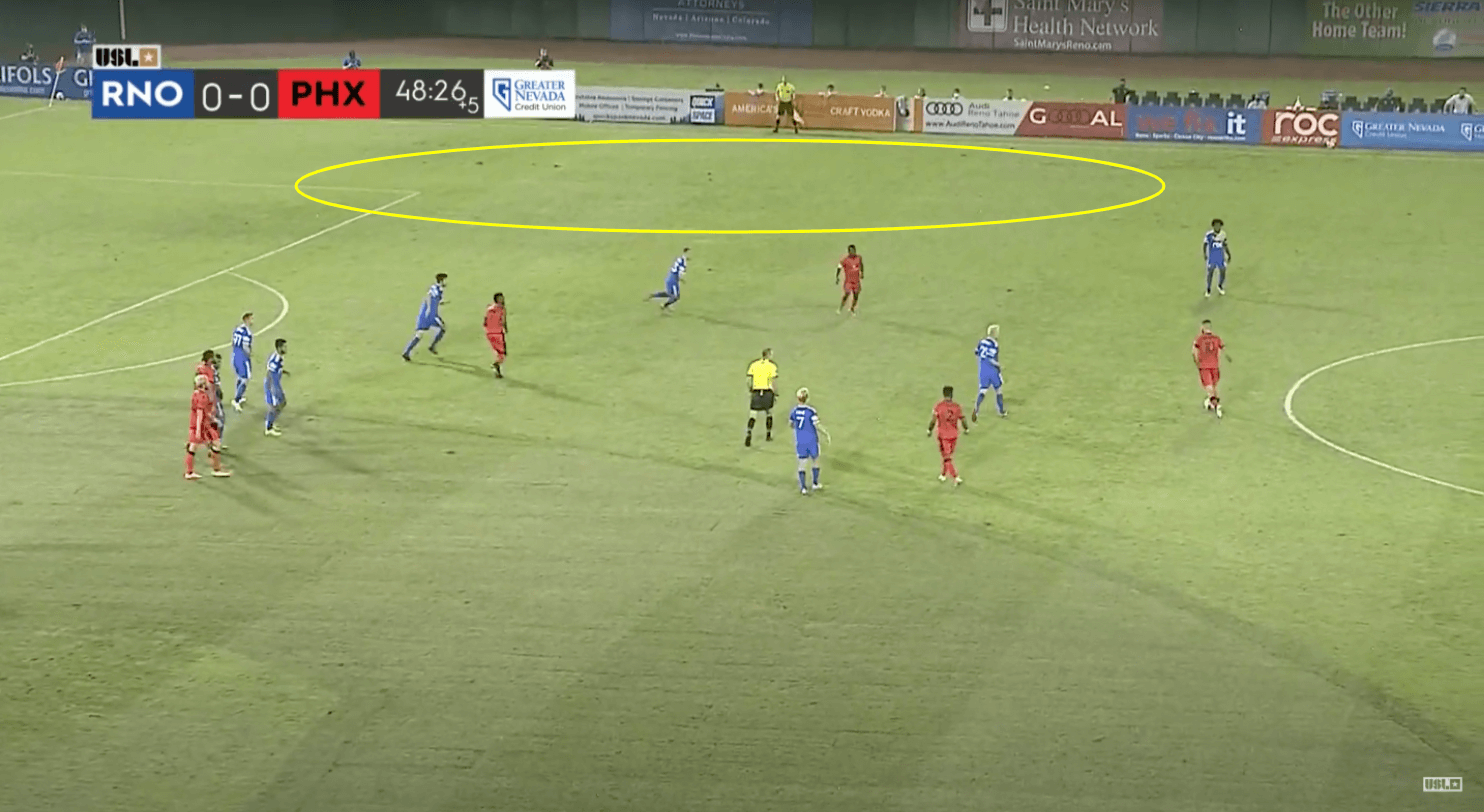 Towards the end of the first half, Rising found possession of the ball after a long kick from Lubin. There are seven Rising players in the image above, and none of them are available on either of the outside flanks. Asante was in the half-space on the right, which he often occupies, but the large amount of space on the right wing was begging to be attacked. Instead, the Rising players were essentially all in the centre channel, making it incredibly easy for Reno to defend. While King was pushed up, this would have been the perfect opportunity for Calistri to streak forward and provide some of that much-needed width. 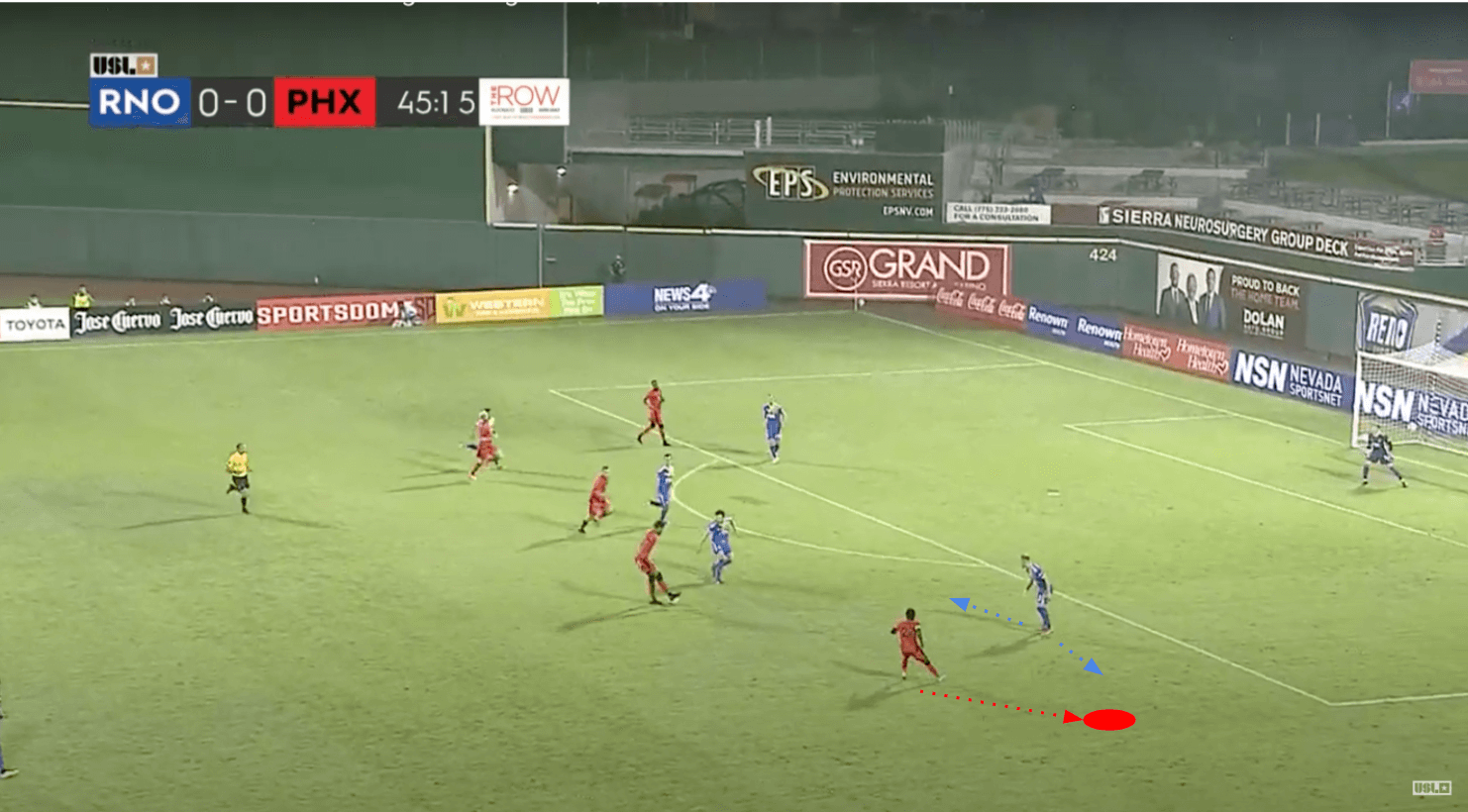 Right at the start of the second half, again the lack of width cost Phoenix a chance at goal. Moar did well to turn and dribble at the defence before laying the ball off to Lambert. In this instance, Asante is again positioned too centrally. Ideally, he would be positioned as annotated in the image. This would have allowed Lambert to provoke both defenders into making a decision. He could have slotted Asante through by splitting the two defenders with a pass or could have played the ball to Asante and allowed him to go 1v1. Instead, there wasn’t enough room to operate, and Lambert had to settle for a less-than-ideal pass to Moar, who was marked the entire time and had to pass the ball backwards to a teammate.

Phoenix left the match frustrated, having generated 25 shots on target compared to Reno’s 11. In the end, Reno made better use of their chances and secured all three points in the process. Reno’s next match is against Portland Timbers 2, a team that currently sits at the bottom of Group A. Phoenix will look to rebound against Las Vegas Lights FC, who they played last week in a match that saw Rising give up two goals late in the match, allowing Las Vegas to earn a 3-3 draw.