On another hot evening in Phoenix, Arizona, Phoenix Rising welcomed San Diego Loyal SC to Casino Arizona Field for their USL Championship match. Rising welcomed the newcomers to the USL by dominating most of the match, earning all three points in their 2-0 victory over San Diego. 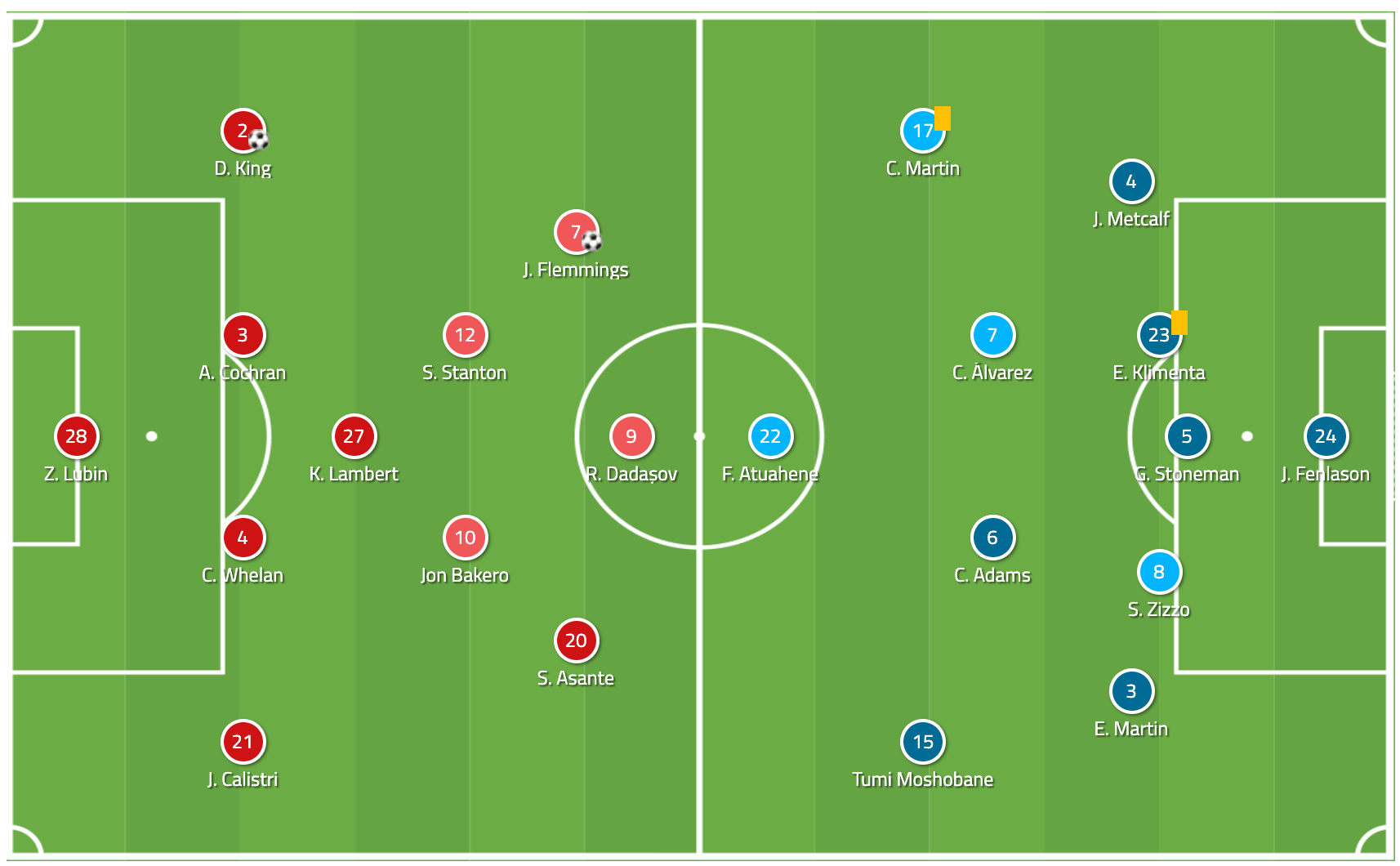 Rick Schantz sent Rising out in a Barcelona-esque 4-3-3 with Zach Lubin in goal. Darnell King started as the left-back, with Corey Whelen and A. J. Cochran as centre-backs, and Joey Calistri as the right-back. Kevon Lambert was the holding midfielder with Jon Bakero and Sam Stanton as the other two central midfielders. The front three consisted of Junior Flemmings on the left-wing, Solomon Asanté on the right-wing, and new signing Rufat Dadashov, who has spent time in the lower leagues of the Bundesliga, as the centre-forward.

Landon Donovan had his club line up in a very defensive 5-4-1 formation with Jake Fenlason in goal. Their back line consisted of Elijah Martin, Sal Zizzo, Grant Stoneman, Emrah Klimenta, and Jack Metcalf, with Metcalf on Martin on the outside of the back three. In front of them were Charlie Adams and Carlos Alvarez in the centre, with Tumi Moshobane on the left flank and Collin Martin on the right flank. Their lone striker at the start of the match was Francis Atuahene.

Much of Phoenix’s season is often defined by the play of their wingers, Solomon Asante and Junior Flemmings. This is for a good reason: they have a combined 12 goals and eight assists through seven matches between the two of them. Despite not receiving as much attention, Rising’s midfield obviously plays a significant role in their success, and the trio of Sam Stanton, Junior Flemmings, and Jon Bakero displayed their quality against San Diego. If these three continue to do so, Rising’s attack will continue to flourish as it has historically.

Sam Stanton was key in getting behind lines of pressure and opening up space for his teammates to occupy. This allowed for more penetrating passes for Phoenix, which made them more dangerous in possession. 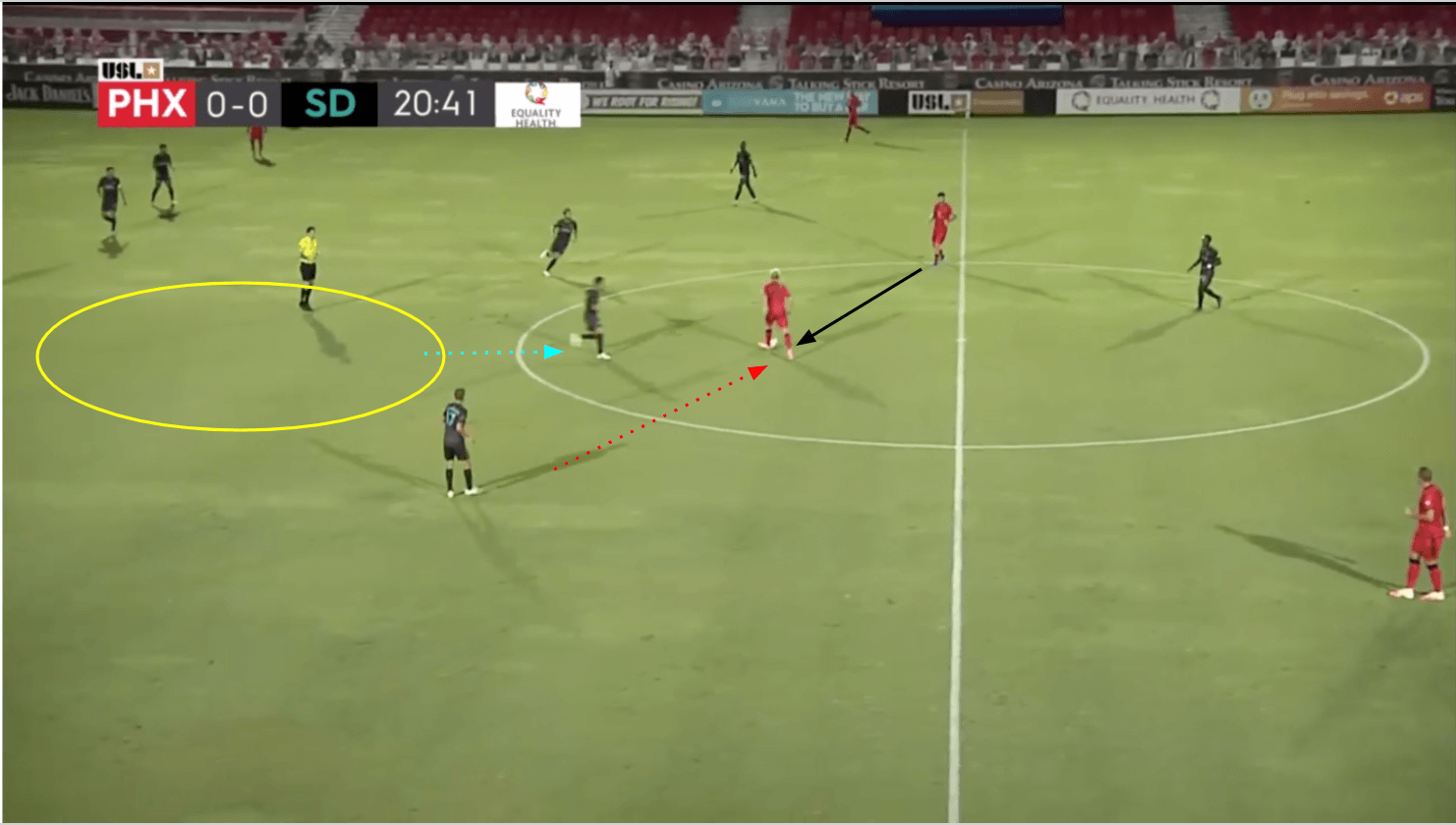 One example of Stanton doing so is shown above. As Rising progressed up the pitch, Stanton checked to the ball from the left half-space. This required the defenders to ‘pass’ him off to one another. As the Loyal defender stepped to pressure Stanton as the pass arrived, he vacated the space he was protecting. There was suddenly a lot of room between the defensive lines of pressure, which Phoenix was unable to exploit, as they only had two midfielders actually in the midfield, as Lambert was back between the centre-backs. This ability to attract defenders was a big part of the reason Junior Flemmings was open on his thunderstruck shot that opened the scoring for Phoenix.

Stanton was also able to create opportunities for Rising through his progressive runs in the match. San Diego didn’t seem prepared to defend properly against these, and Rising could have done more to take full advantage of them. 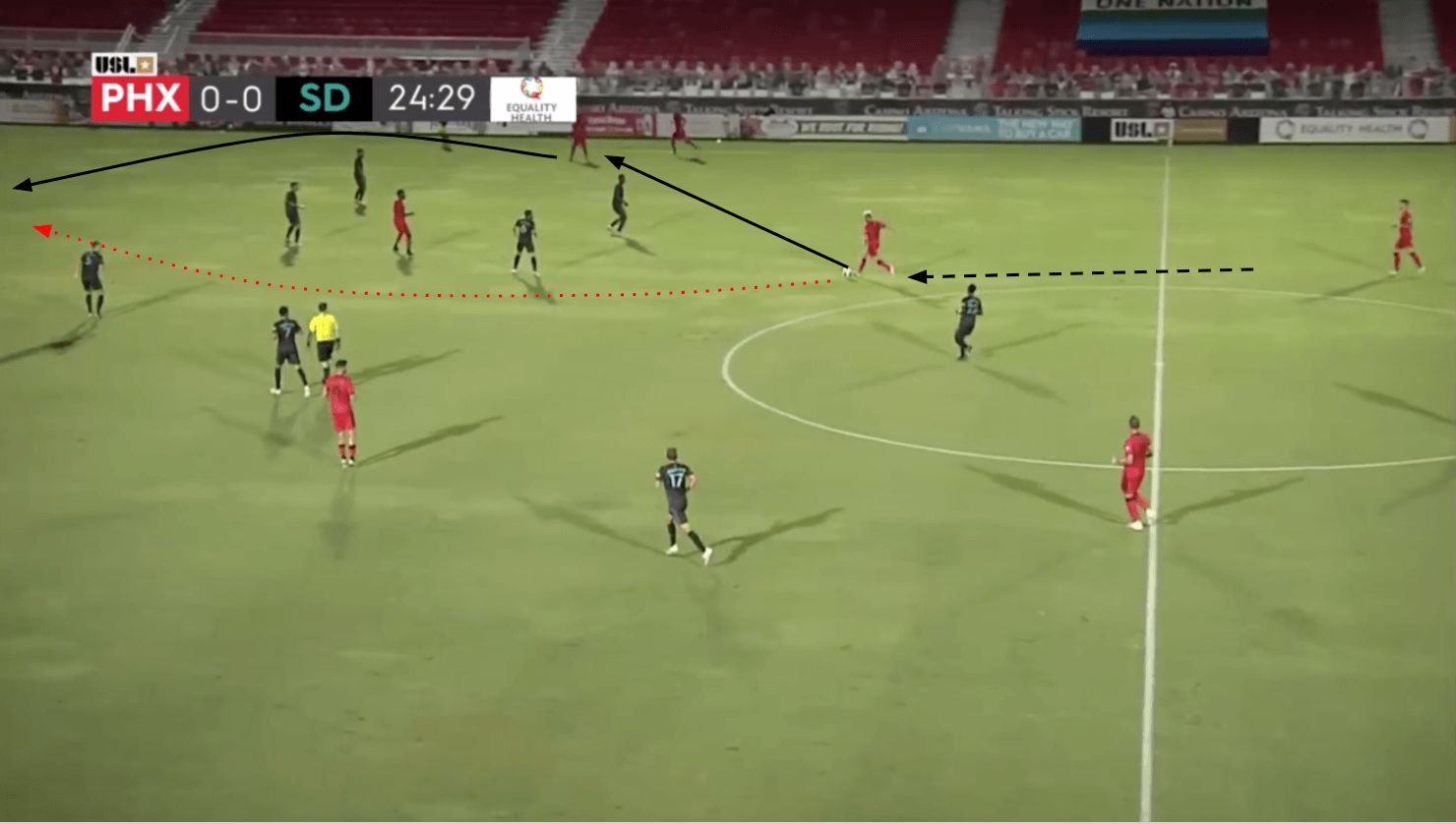 In the image above, Stanton dropped to receive the ball in order for Phoenix to progress past the first line of defensive pressure. As he dribbled forward, he recognised the overload that Rising had created on the right side, with Flemmings sliding over in the half-space and Asante on the wing with Calistri pressing forward. This overload attracted the attention of the Loyal defenders. Stanton coolly jogged through two lines of defenders without being picked up, and Asante lofted a ball towards a wide-open Stanton. While the pass ran out of touch, the space Stanton was able to find will cause problems in the future if opponents aren’t ready.

The midfield’s presence was felt on Rising’s second goal as they built up from the back, continuing to attract opponents with their possession. 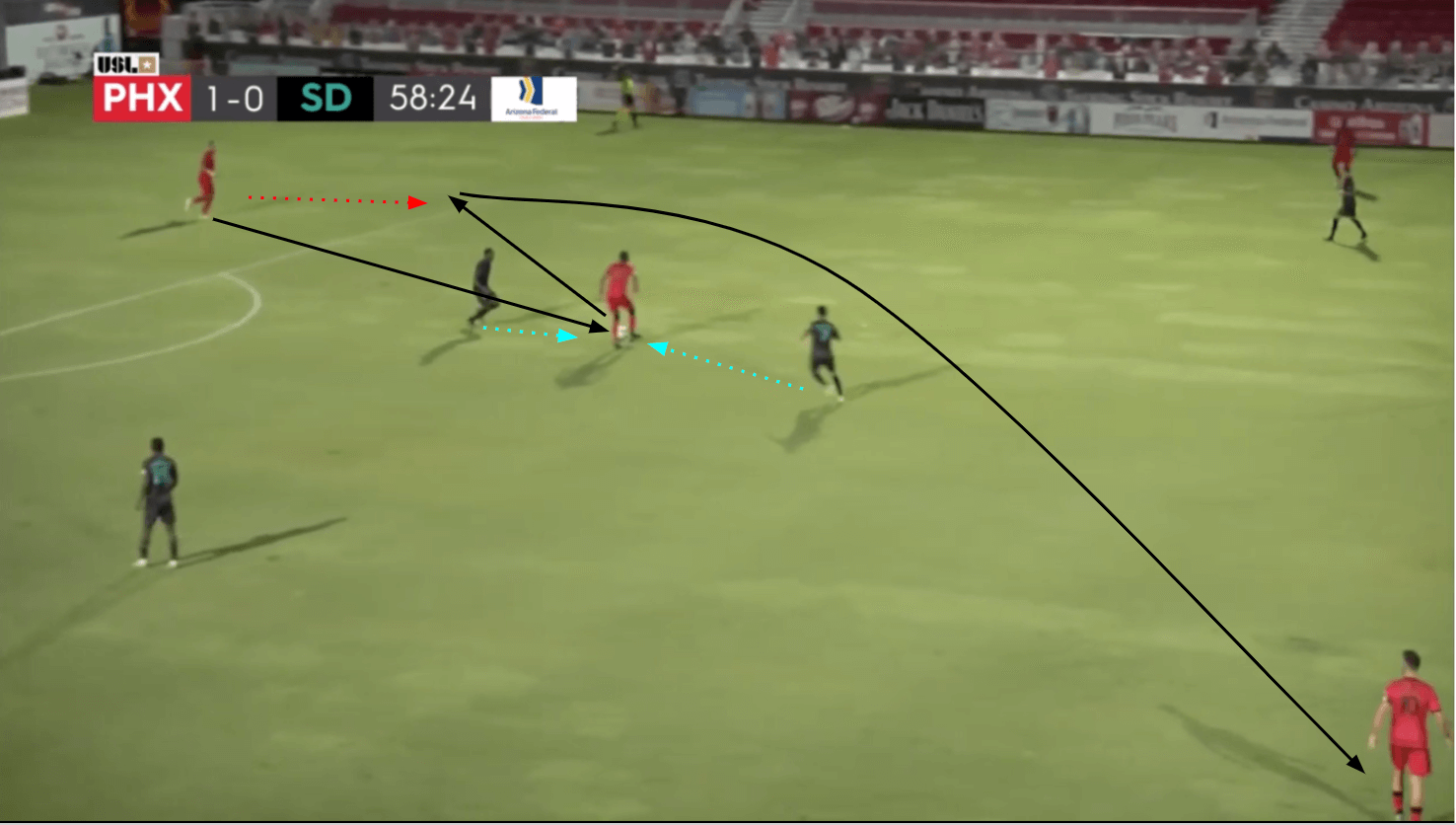 Here, Lambert attracted the attention of two Loyal players. He quickly played the way he faced, playing the ball back to Cochran. The two defenders collapsing on Lambert allowed the passing lanes to open up, which Cochran used to string a pass to Bakero, who was able to turn and dribble at the defence. 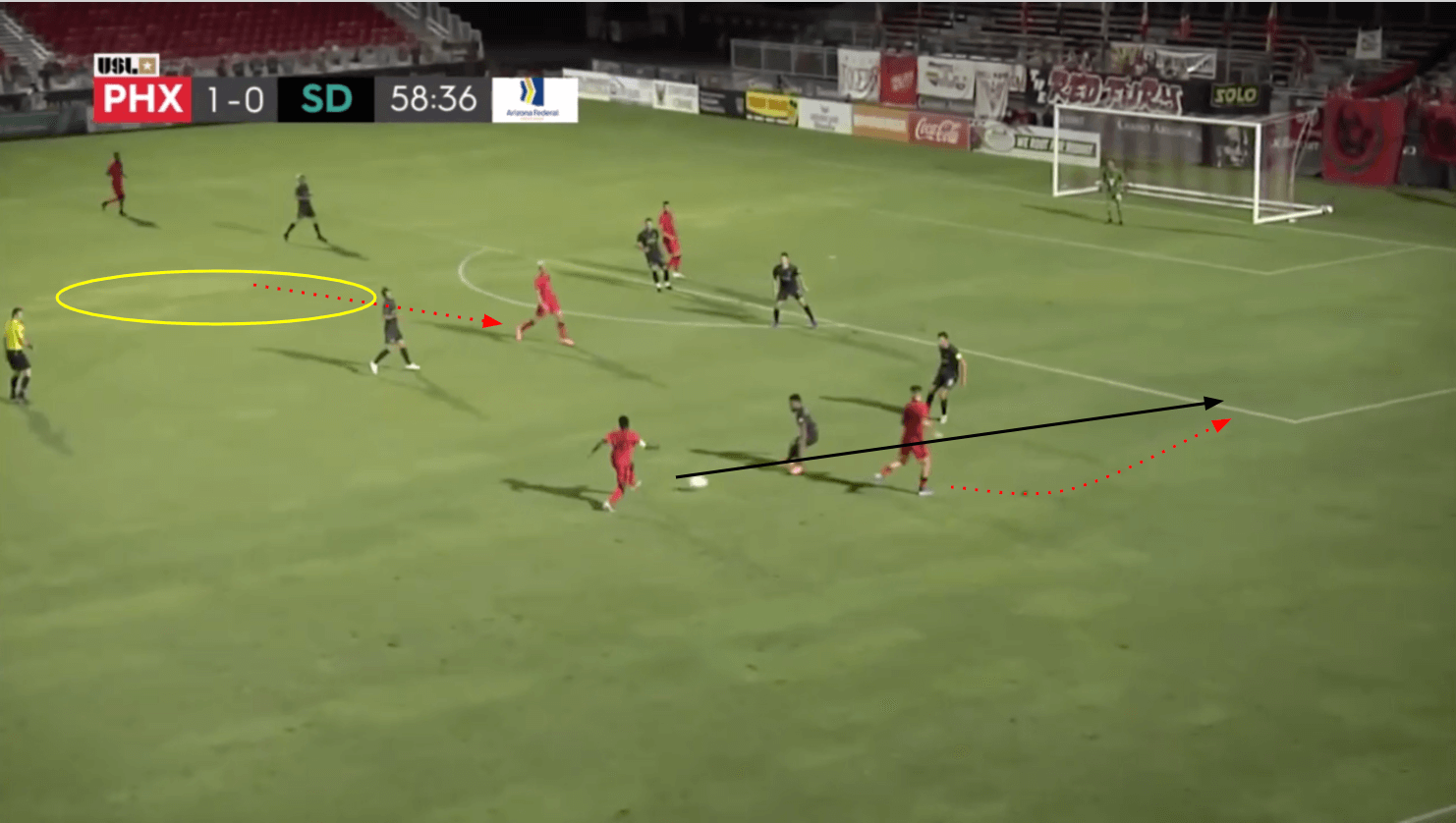 Bakero and Asante combined to get Bakero through, and Stanton made a run towards the ball, dragging the one Loyal midfielder with him in the process. This created a large amount of space between the defensive lines, as the other Loyal midfielders were much higher up the pitch. While Bakero’s cross didn’t immediately find a teammate, the poor clearance (mostly due to pressure applied by Dadashov) allowed Darnell King to run into the space Stanton had just left and blast the ball into the back of the net.

Phoenix are primarily known for their fluid football that often allows them to attack at speed and take advantage of an opponent’s transition from attack to defence. That being said, Rising produced multiple set pieces Saturday evening that produced clear-cut chances. Their first came from a short corner shown below. 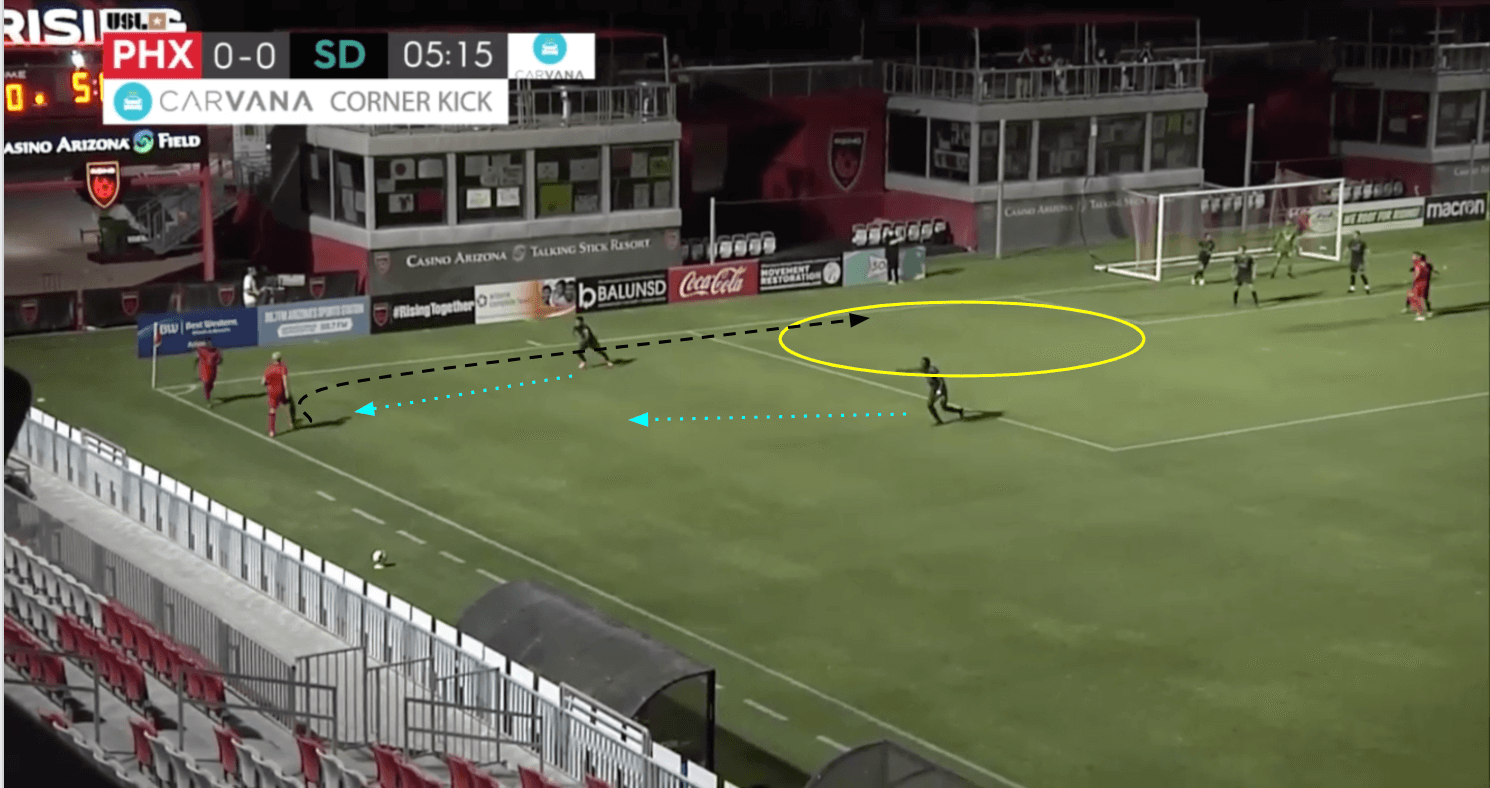 Asante and Stanton are the men on the ball, attracting two Loyal defenders for the short corner. While the defenders need to give them their space, they have a large amount of room to close down in a short time if they want to prevent a cross from coming in. To prevent that, the Loyal defender sprints at Stanton, who faked the cross and took his touch by him. Rising did well to vacate the space in yellow, where they knew Stanton would look to dribble. As Stanton dribbled, Rising players began their attempts to dismark their opponents. Stanton’s cross was driven at the penalty spot at head height, which resulted in it running through the box untouched. However, Rising had Calistri there to clean up, and he was able to loft a ball to the back post, which the Loyal goalkeeper ultimately caught. Still, Rising had created two solid chances within seconds of one another. 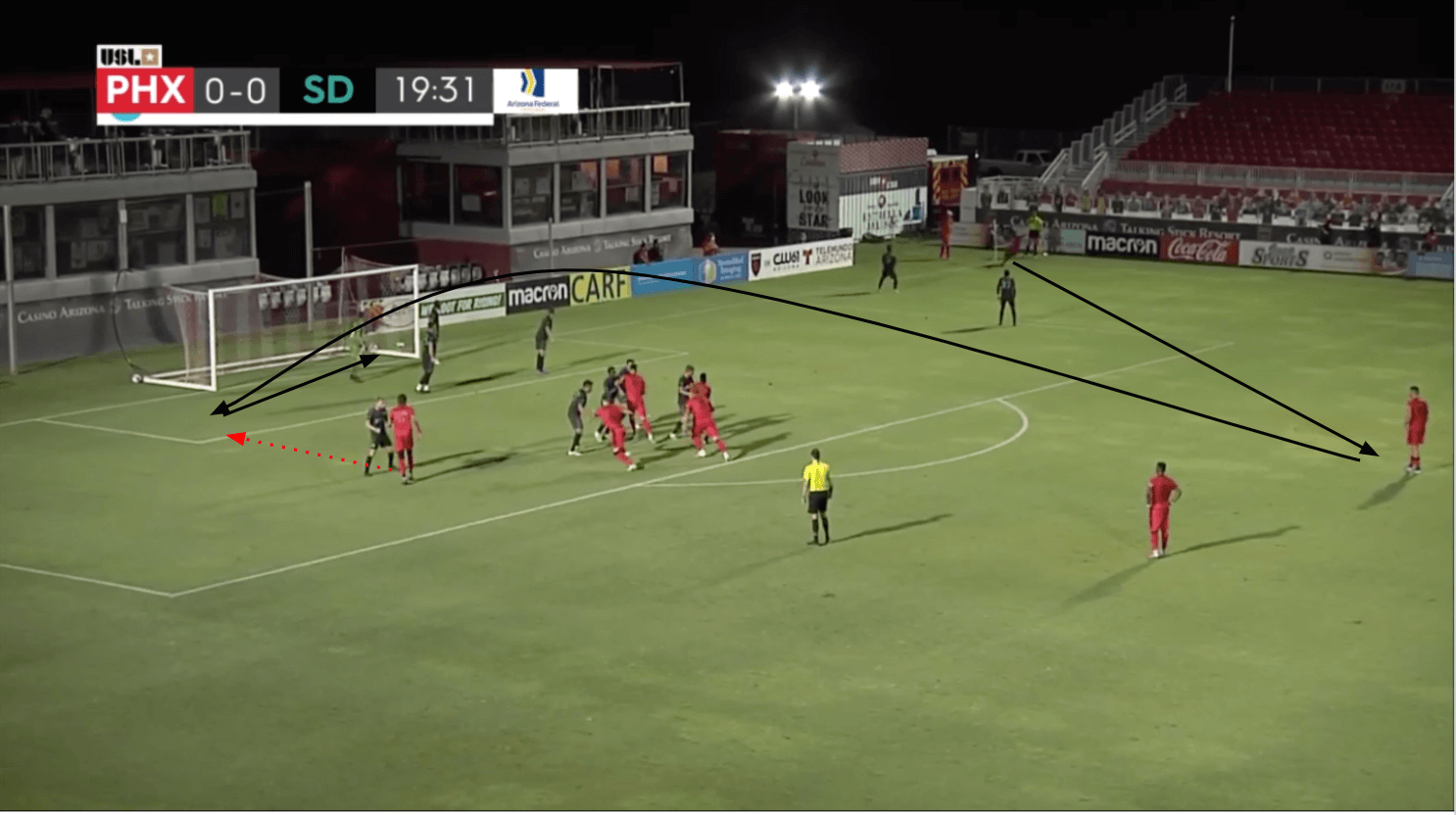 Another corner kick later in the match saw them emulate some of their fluid football, with Rising occupying multiple spaces and switching the field quickly to take advantage of Loyal’s organisation. They started with having two men on the ball again, with Stanton and Asante offering an in-swinger and out-swinger, causing uncertainty in the defence. Rising started with their runners at the top of the penalty area, creating space for them to run into. Asante quickly played the ball to Bakero, who had enough room to set himself up for a pass, and lofted one to the back post. Flemmings made a run to the back post and was able to cross the ball to Dadashov, who finished the chance. Unfortunately, Rising’s timing wasn’t perfect, and Loyal was able to step up quickly enough to catch them offside. 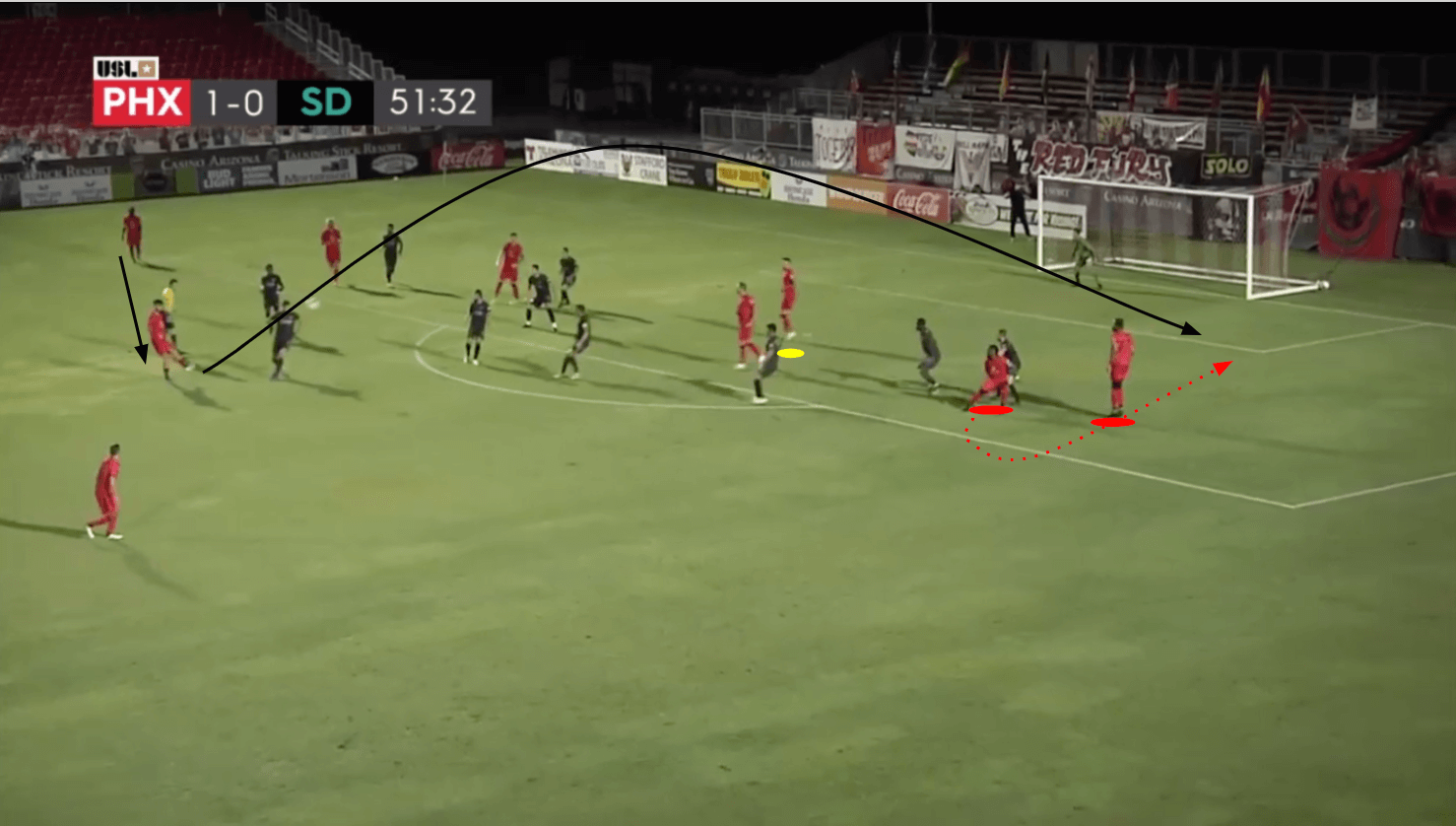 Using similar positioning, Rising again found the opportunity to find someone on the back post. Again, they pulled two defenders out by having two men on the ball. This created space and time, albeit less than previously, for Bakero to receive the ball and play it to the back post. Lambert and Flemmings had established a 2v1 against the Loyal defender on the far post. This time, Lambert didn’t make the run; Flemmings curled his run and got in behind, open in the space. Dadashov, marked in yellow, started in an offside position, as he loves to do. This meant that when the ball went to Flemmings, he was wide open in front of the goal as the Loyal defenders dropped to cover. Luckily for them, Flemmings pass was too close to the goalkeeper, and he wasn’t able to find Dadashov.

San Diego should have come into the match knowing about Rising’s press and their willingness to commit men forward to frustrate opponents. This often results in Rising’s opponents playing aerial passes that are essentially 50/50 balls. This pressing allows Rising to attack during transitions, where they are most lethal. That being said, San Diego was still willing to attempt to play out of the back, albeit without much cohesion. 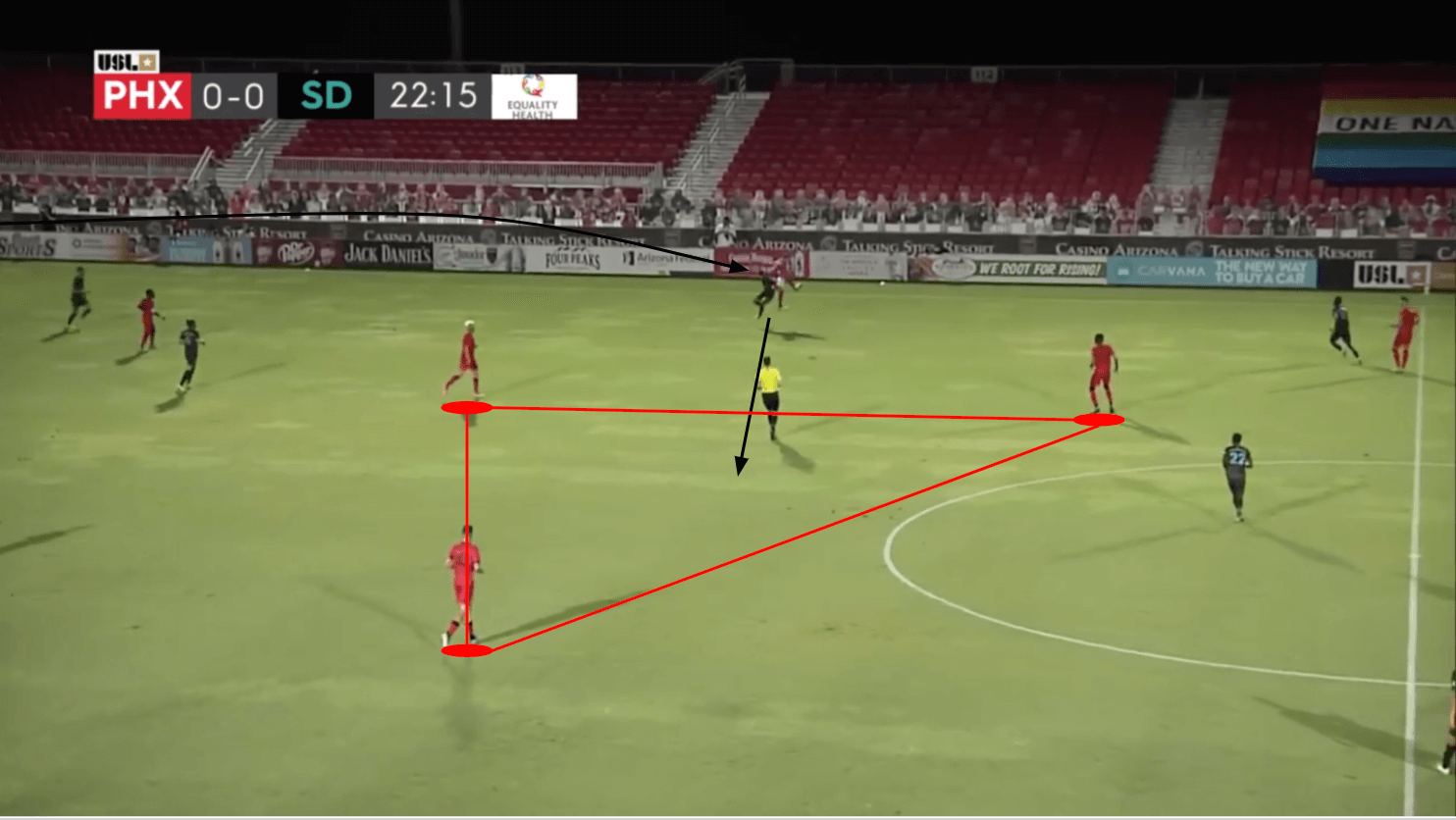 The above image shows the result of San Diego trying to invite pressure up the pitch. Yes, they were able to get Phoenix’s front three to step forward. However, they essentially had their three central defenders, Sal Zizzo, Grant Stoneman, and Emrah Klimenta, all in a line with Fenlason, their goalkeeper. With the addition of the two central midfielders, they had numerical superiority, but their positioning gave them no advantage, and so they were forced to send the ball long. This led to this aerial duel where the ball bounced right into the centre of the pitch with Bakero, Lambert, and Stanton triangulating it. Amazingly, the Rising couldn’t get a player on the ball, but this pattern of San Diego not being able to either build up properly or win second balls consistently didn’t allow them to be much of a threat moving forward. 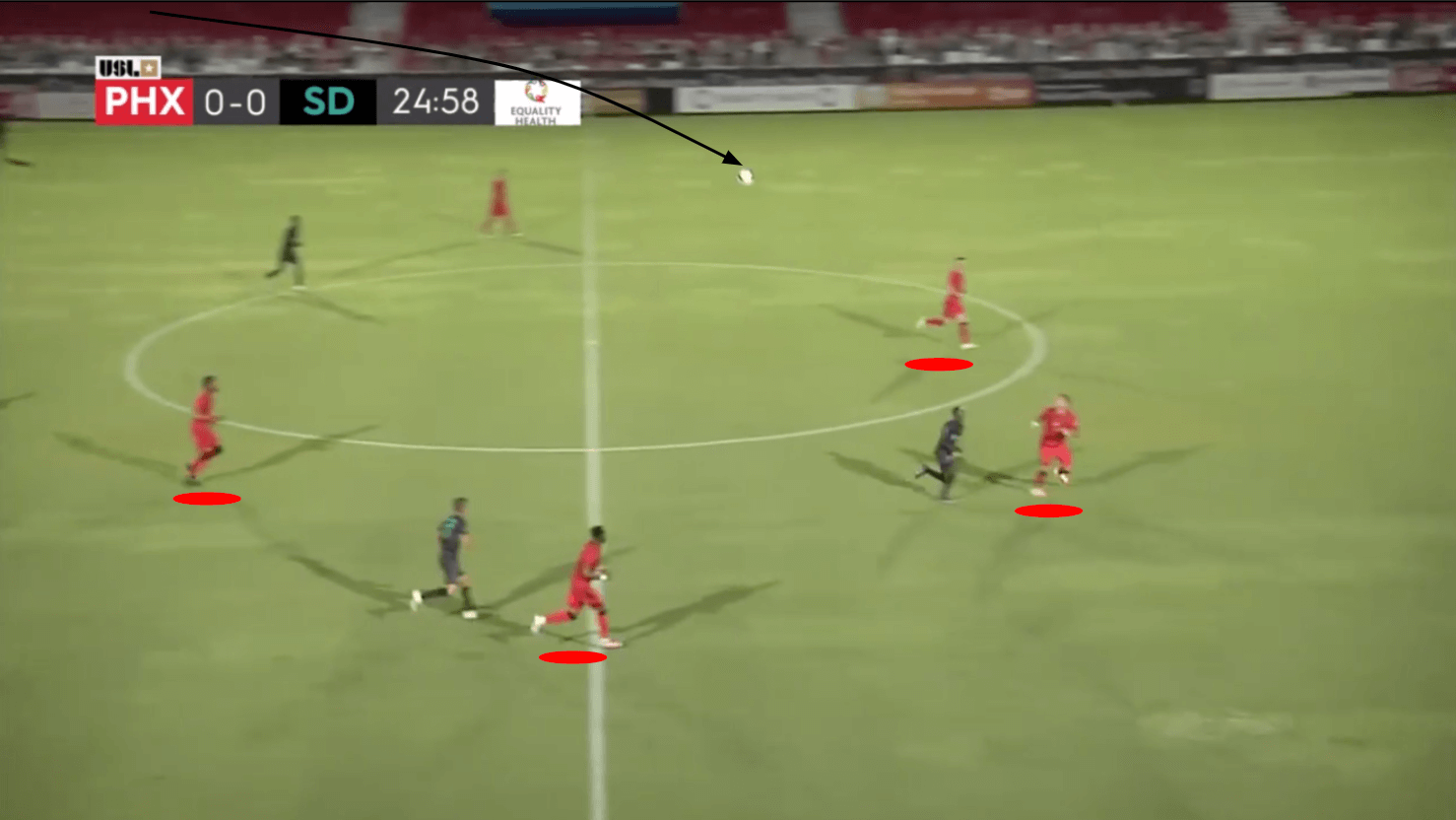 The image above highlights the continued confusion that Landon Donovan’s squad played with. Again, as has been documented in many match analysis of Phoenix’s squad, their commitment to sending men forward continued. San Diego continued to look for numerical advantages, but they ultimately had to send the ball high up the pitch. When the ball arrived, as it was in the moment highlighted above, Phoenix had a great numerical advantage. All Cochran needed to was head the ball towards the space on his right, and Phoenix would be back in possession. These unbalanced attempts at progressing up the pitch stunted their ability to build any meaningful attacks. The other problem that San Diego faced was their defensive discipline. 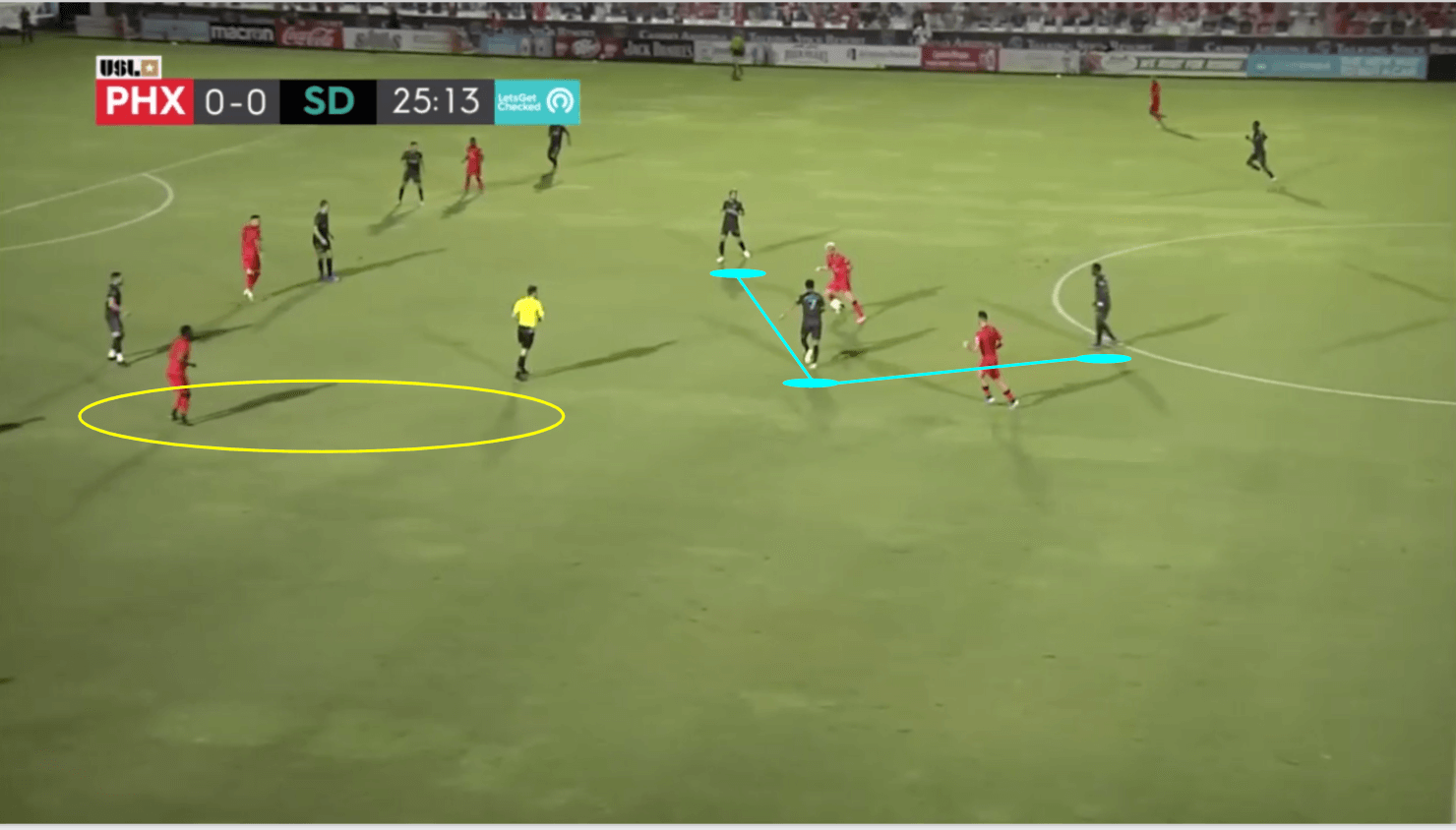 The image above comes seconds before Junior Flemmings’ goal. San Diego’s midfield is not organised defensively, with the players committing to press the ball as opposed to sit in and protect the space. This willingness to press created a lot of space between the two defensive lines. The fact the Flemmings was unmarked in the half-space speaks to the fact that the back five were unsure about what to do when Darnell King came up to establish width, allowing Flemmings to check in. As a result, Flemmings was able to receive, take his first touch inside (which he always does), and then unleash an absolute blast of a shot, putting Phoenix ahead.

In the end, San Diego couldn’t do enough to create chances to pose a serious threat to Rising’s goal. The 2-0 victory was more than deserved. With the win, Rising established themselves as the top team in Group B, albeit having played two more matches than second play Orange County SC. Rising have a quick turnaround this week as they travel to take on LA Galaxy II on Wednesday before battling Las Vegas Lights on Saturday evening. San Diego will look to get back on the right track next Saturday when they take on Reno 1868 in San Diego.