On Saturday evening, Phoenix Rising welcomed El Paso Locomotive to Casino Arizona Field in 105 degree heat for their USL Championship match. Rising was looking to earn three points after only earning one out of their last available six against Orange County SC. El Paso was in a similar situation, earning only one point out of six in their last two matches, both of which were against New Mexico United. Ultimately, Rising’s transitions and qualitative advantages proved to be too much, as they were able to send off assistant coach Peter Ramage, who will be joining EPL club Newcastle as an assistant coach for their U23 team, with all three points. 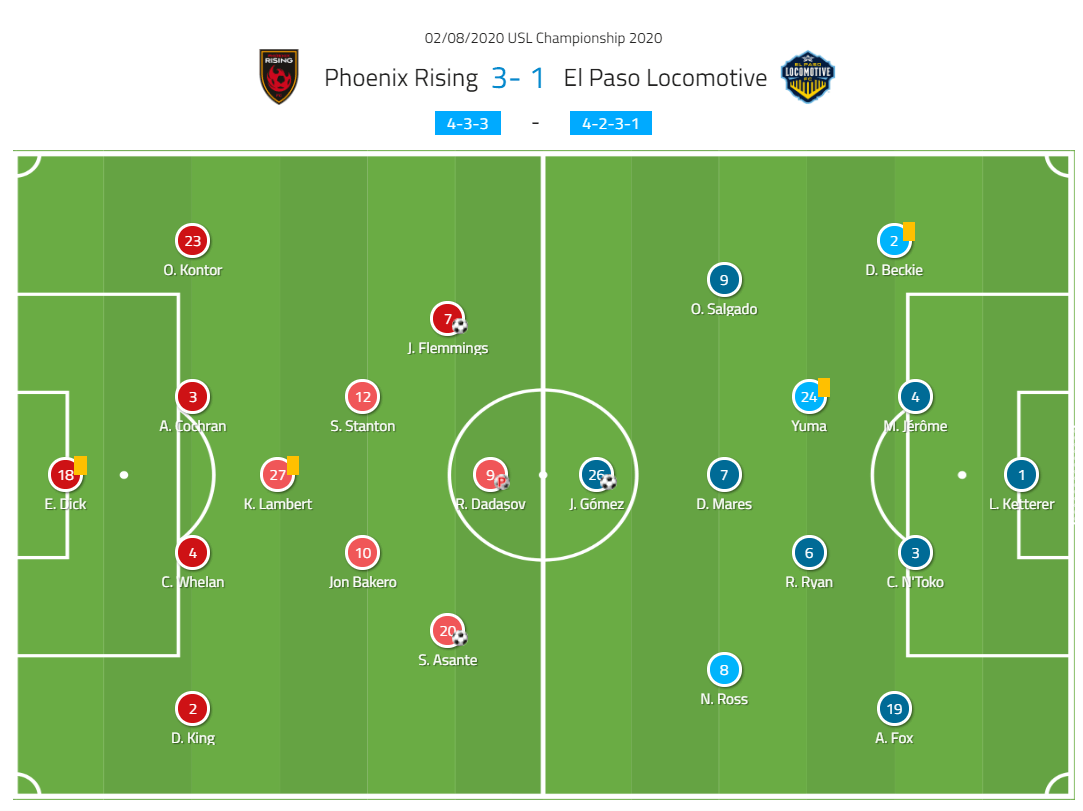 Rick Schantz sent Rising out in a Barcelona-esque 4-3-3 with Eric Dick in goal. Darnell King started as the right-back, with Corey Whelen and A. J. Cochran as centre-backs, and Owusu-Ansah Kontor as the left-back. Kevon Lambert was the holding midfielder with Jon Bakero and Sam Stanton as the other two central midfielders. The front three consisted of Junior Flemmings on the left-wing, Solomon Asanté on the right-wing, and new signing Rufat Dadashov, who spent time in the lower leagues of the Bundesliga, as the centre-forward.

Mark Lowry set his squad up in a 4-2-3-1 with Logan Ketterer in goal. In front of Ketterer was Andrew Fox as the left-back, Chiró N’Toko and Mechack Jérôme as the centre-backs, and Drew Beckie as the right-back. The two holding midfielders were Yuma and Richie Ryan. In front of the defensive midfielders were Nick Ross on the left wing, Omar Salgado on the right wing, and Dylan Mares as the attacking midfielder. The lone striker and El Paso’s goal scorer was Aarón Gómez.

One of the best ways to mitigate Phoenix’s attack is to reduce the number of transitions from attack to defence. This becomes incredibly important when in the middle third of the field. While El Paso was certainly able to reduce the number of turnovers due to their positional play, Rising still found the opportunity to quickly transition and catch El Paso on the back foot. The first examples come off of an intercepted throw-in. 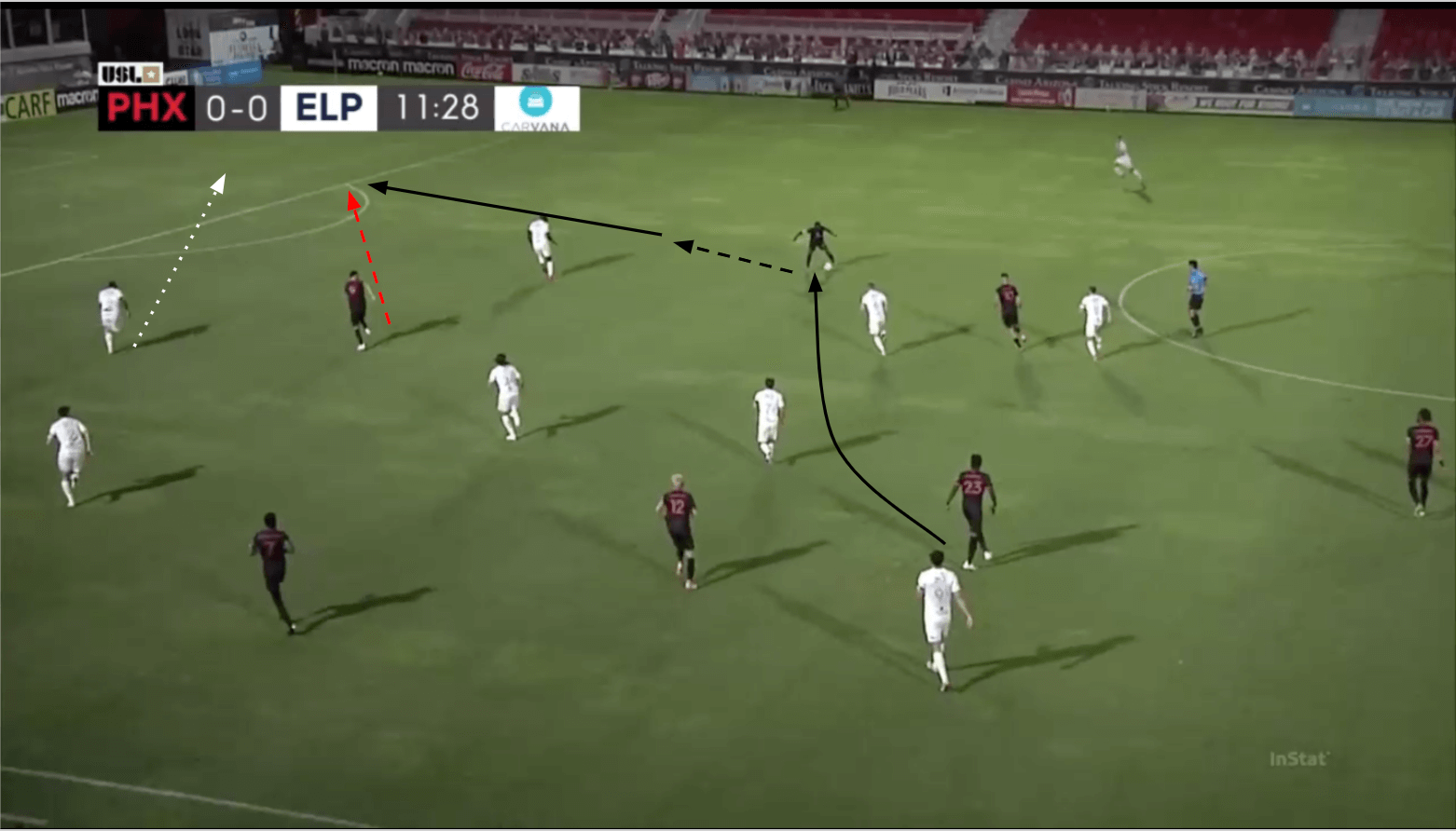 As Owusu-Ansah Kontor intercepted the poor throw, his head was up, looking for an open teammate on the opposite side of the pitch, where Rising could transition away from pressure and attack the goal. He quickly identified Asante, who was in between the defensive lines of pressure. Kontor’s pass effectively eliminated six of the ten outfield players from play, allowing Asante to dribble at (and engage) the centre-back as Dadashov made a run to the corner. While both players executed the move well, Asante’s pass was ultimately hit too hard, and El Paso was able to escape the pressure.

They weren’t as lucky later in the match when Rising again won possession in the middle third through Junior Flemmings. Flemmings was able to turn and take a touch up the pitch as shown below. 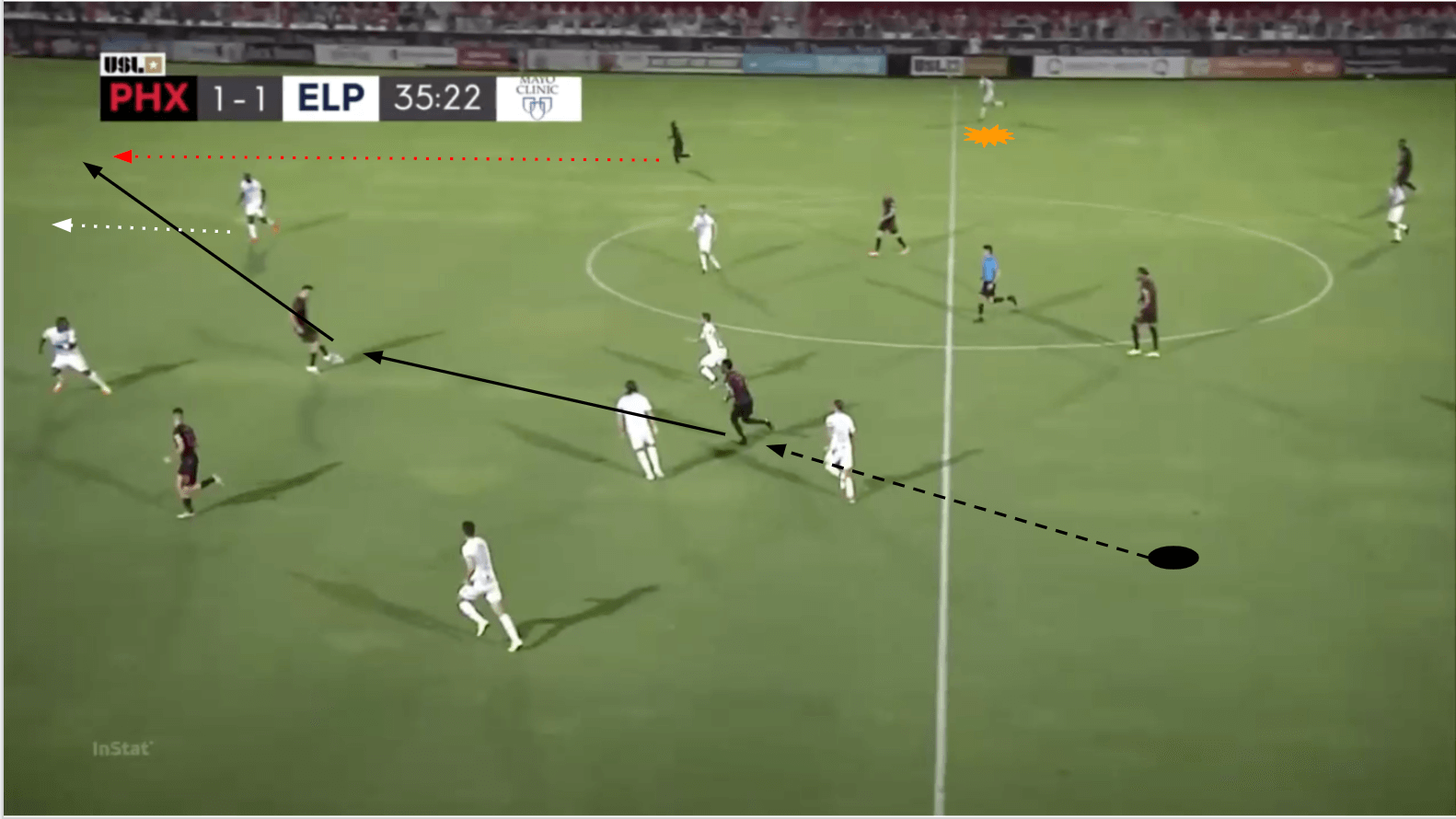 While Flemmings quickly distributed the ball to Dadashov, who had checked back in between the defensive lines of pressure. The important part of this move and the ensuing goal was the positioning and movement of Solomon Asante. El Paso’s left-back, highlighted in orange, was high up the pitch as he looked to provide width for El Paso as they were in possession. Asante’s positioning is perfect: close enough to him to be able to pressure him if necessary, yet far away enough to have a large head start if a race towards El Paso’s goal suddenly occurred. It did, and there was no way that Andrew Fox would catch him. Dadashov turned and played a perfect pass that caught him in-stride, and Asante did the rest, putting Phoenix up 2-1.

While many of Rising’s scoring chances came from them winning the ball in the centre of the pitch, goalkeeper Eric Dick got in on the playmaking action. The opportunity below stems both from Dick’s vision as well as Rising’s wingers quality. 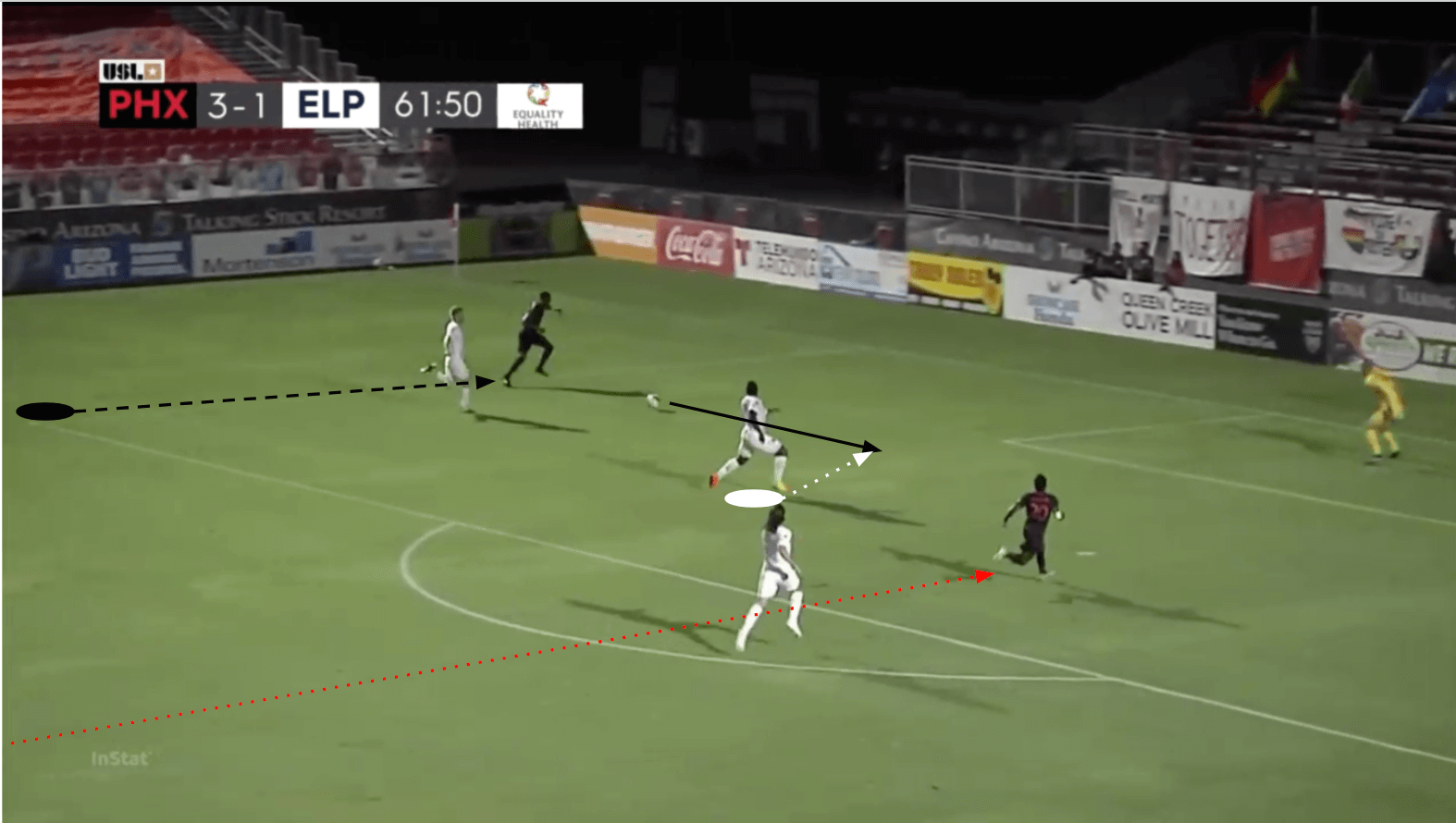 Dick likely recognised the qualitative advantage Phoenix had before the corner was even taken. El Paso committed many men forward, but Rising allowed both Flemmings and Asante to remain higher up the pitch. As soon as Dick had the ball in his hands, he rifled a punt down the pitch into the path of Flemmings. It took Flemmings one touch to get into the position seen above. Both Flemmings and Asante used their speed to gain positional advantages over their opponents. Despite being outnumbered, they were able to gain an advantage due to their speed of mind and body. Luckily for El Paso, some last-second defending prevented Rising from scoring their fourth on the evening.

How El Paso beat the press

Because El Paso set up in a 4-2-3-1, Phoenix had to adjust the way in which they press. Normally, Rising use their front three to press, with Dadashov covering a defensive midfielder and Flemmings and Asante pressing their respective centre-backs. This press can be devastating for opponents because it forces turnovers either in their own defensive third or the middle third of the field, which, as demonstrated above, Phoenix loves to take advantage of. 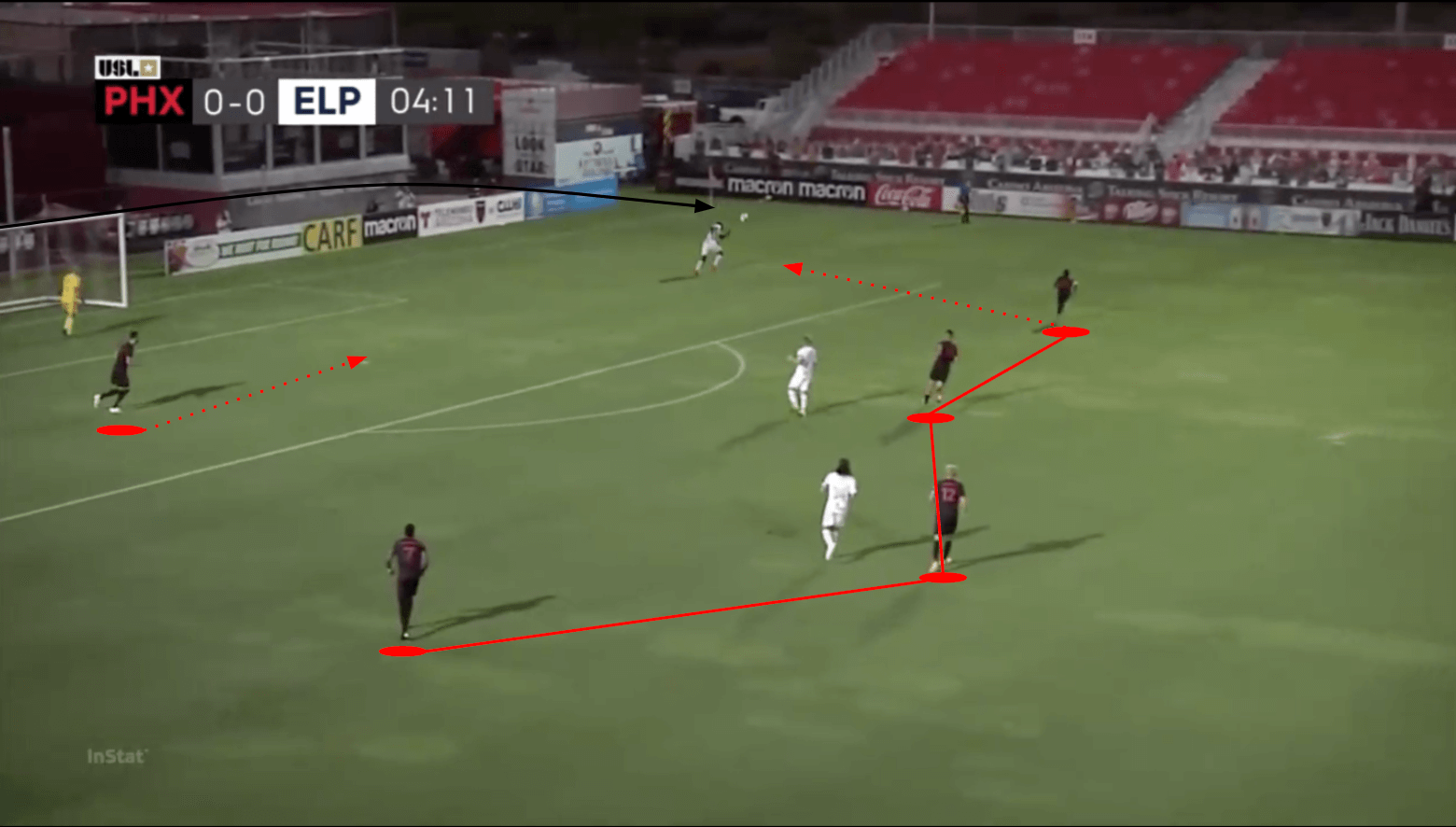 Instead of their normal 4-3-3 pressing structure, Phoenix opted for a 4-1-4-1 structure, which would allow them to mark both of El Paso’s defensive midfielders. This set-up was evident from the beginning of the match as shown above in the image. Dadashov was used to pressure the centre-back in possession. Depending on which centre-back had the ball, either Flemmings or Asante would invite the pass to the outside-backs, where they would then press. 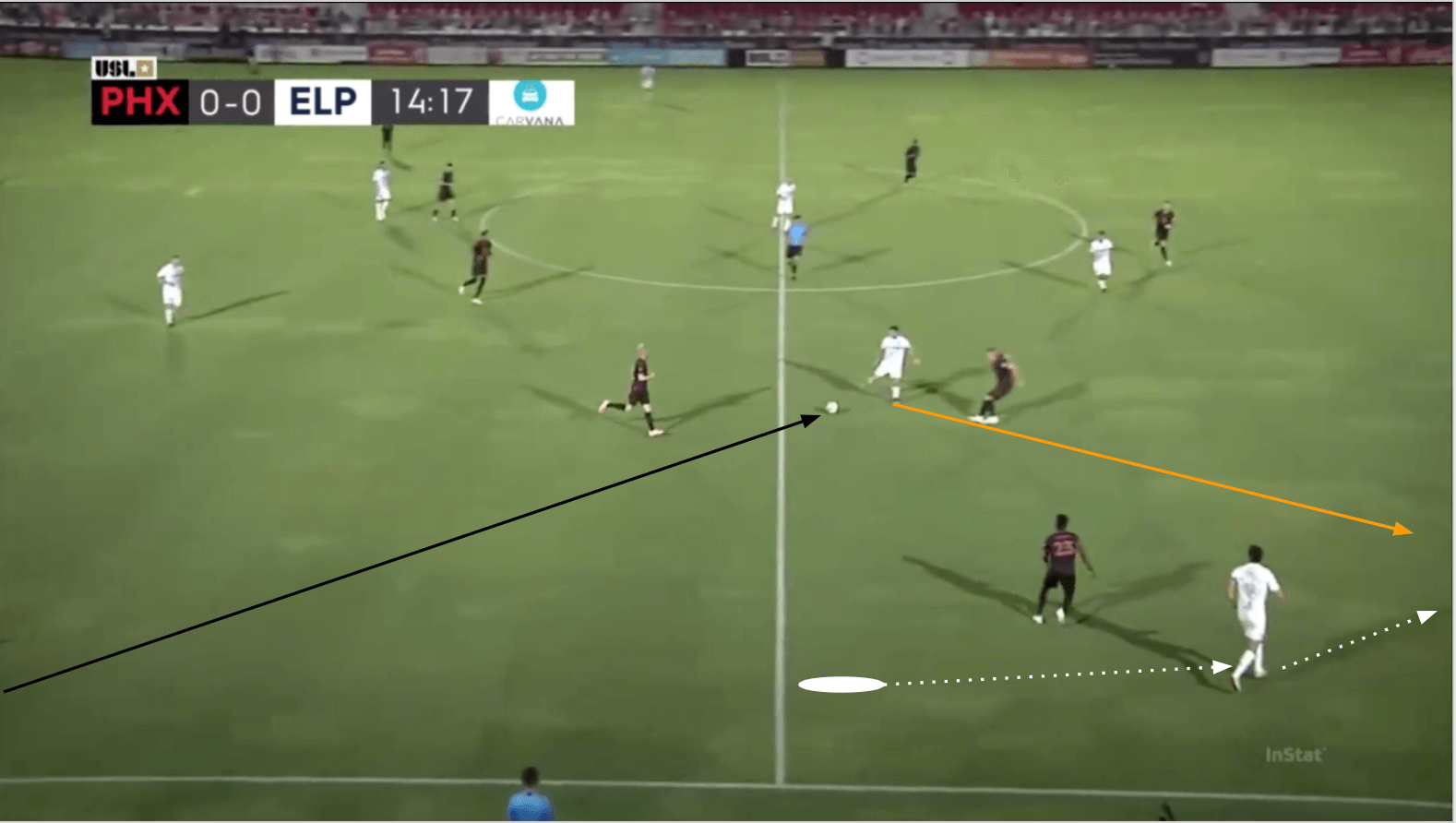 Problems would occur if Rising’s wingers couldn’t provide pressure in time on the outside-backs. In the image above, a long diagonal pass from right-back Drew Beckie to Dylan Mares, the attacking midfielder, broke two lines of defensive pressure and eliminated six Rising players from the play. Omar Salgado, the right winger at the bottom of the image, realised it was the perfect time for a third man run (which El Paso used consistently) to get in behind Rising’s defence. Mares’ pass (marked in orange) didn’t need to be perfect because there was so much room available behind the Rising defence. So while it was a lofted pass, Salgado was still able to get on it and maintain possession for El Paso. This pass from the outside vertical zone to the half-space was a key way El Paso were able to progress past Rising’s defence relatively easily. 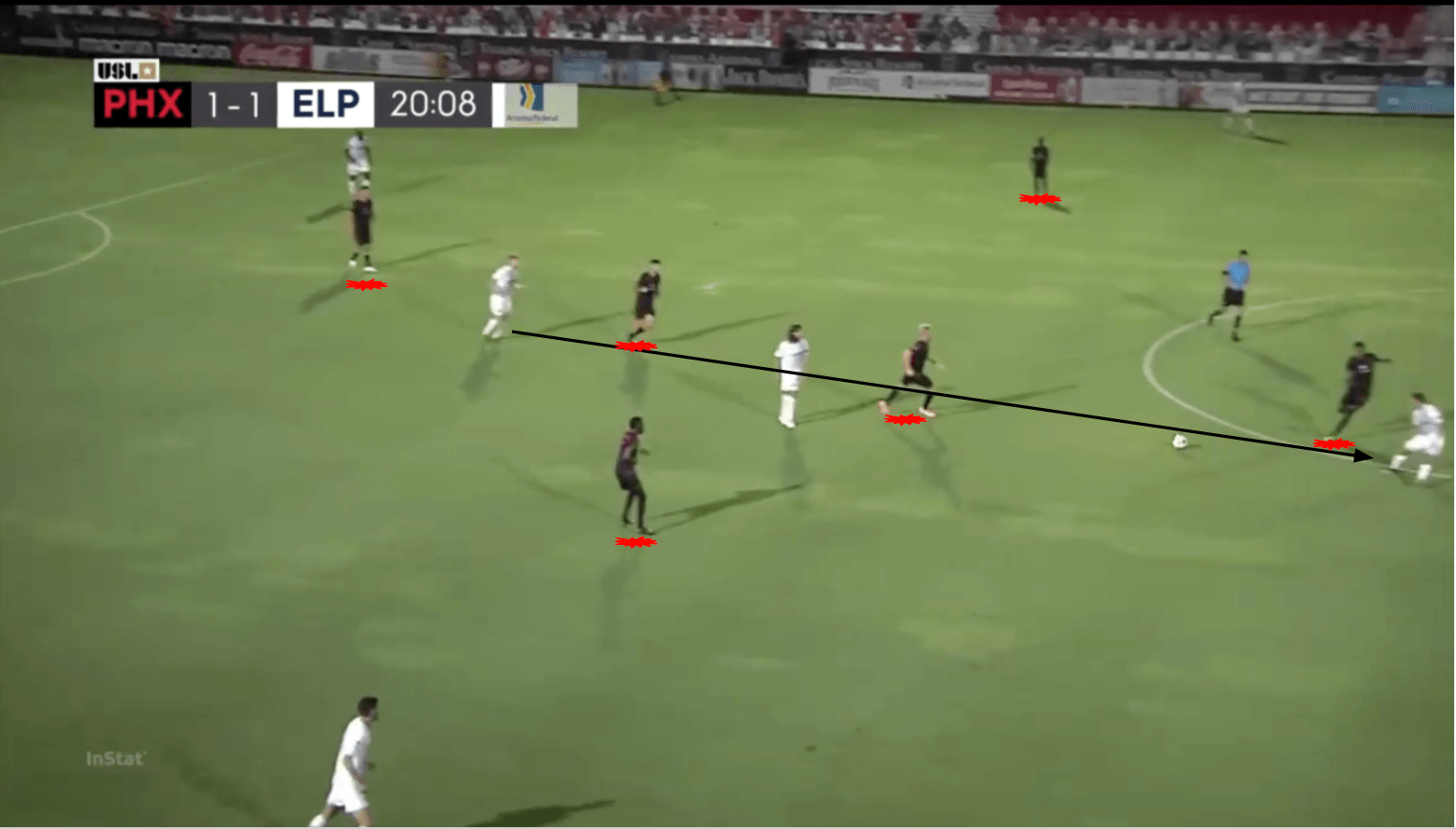 However, with much risk comes much reward. Above is an example where El Paso was able to string a pass through a tight window via Richie Ryan. Ryan’s pass to Mares eliminated six Rising players from play. As Mares received the ball, he turned and was able to dribble up the pitch as Kevon Lambert recovered. While Mares’ pass allowed Nick Ross to deliver a cross that failed to beat his own defender, El Paso was able to create a situation where they had equal numbers as the defence as they attacked Phoenix’s goal. Defending an equal number of players is not ideal for any defence, as it becomes more difficult as soon as they make diagonal runs or attempts to dismark. By transferring this numerical advantage from their middle third to their final third, El Paso was greatly increasing their chances to score.

What was clear with El Paso is that despite losing, they clearly had principles of play that they stuck to, many of which are found in Juego de Posición, or positional play. Most simply put, positional play seeks to create advantages, usually in terms of qualitative, numerical, or positional. One of the best ways to establish positional superiority is to use the third man concept. The’ third man’ concept is about finding the player who is in the best position to go forward and create a goal-scoring opportunity. The first man is the one passing the ball; the second man receives the pass from the first; the third man receives the pass from the second, ideally facing forward without a defender nearby. 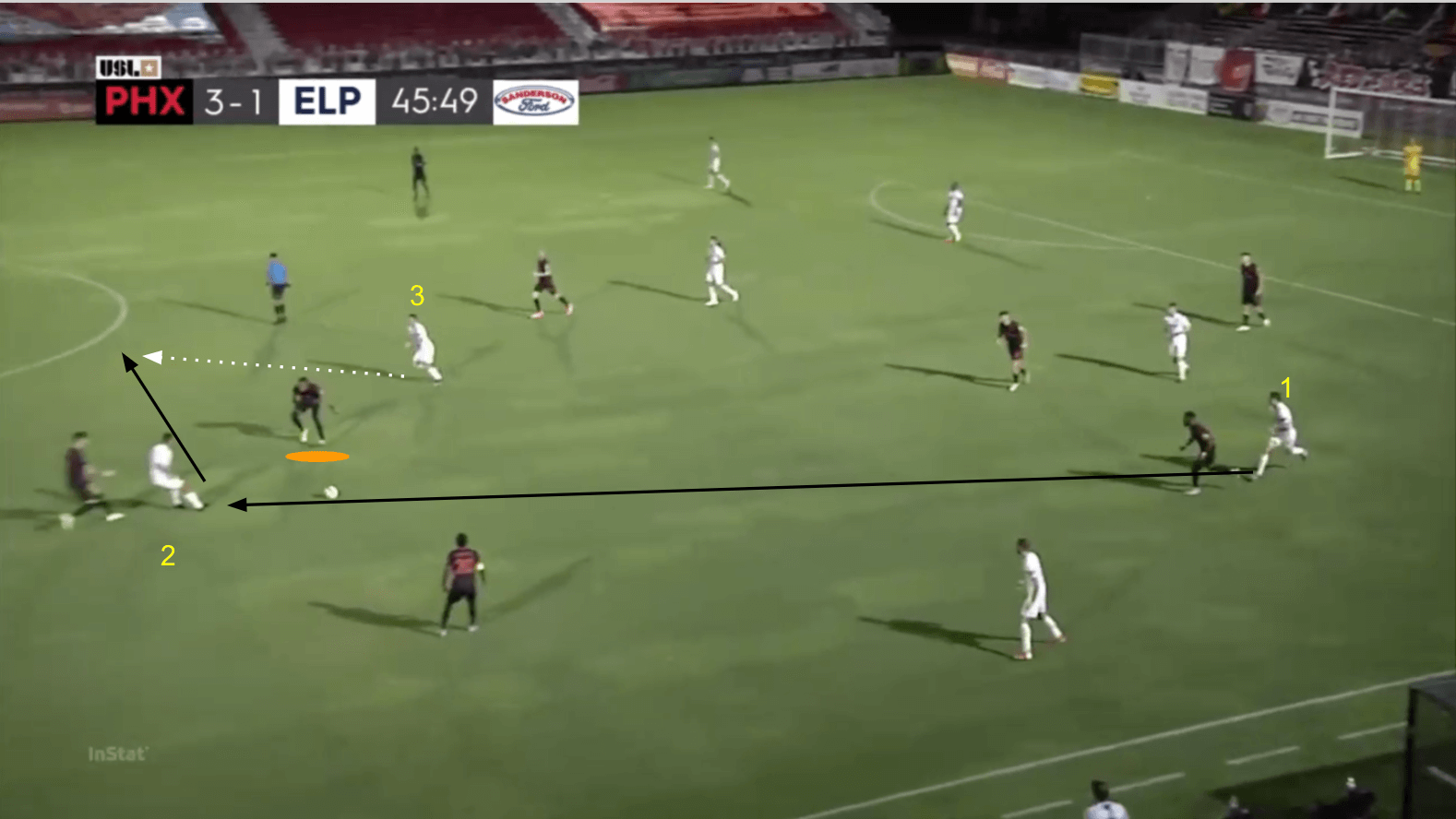 Above is a perfect example of the third man concept in play. Left-back Andrew Fox (1) played a long vertical pass to Aarón Gómez (2), who was checking to the ball. This attracted the attention of Kevon Lambert, who is marked in orange. Like 99% of defenders in the world would have reacted, Lambert watched the ball and took a couple steps towards it. This freed up Mares (3) to separate from Lambert and get in position to receive the ball. Gómez used his first touch to play Mares, who now had the ball at his feet facing Rising’s goal.

El Paso used this to break Rising’s press from time to time, but they also used it in the final third. In fact, their only goal of the evening came from a wonderful execution of this concept. 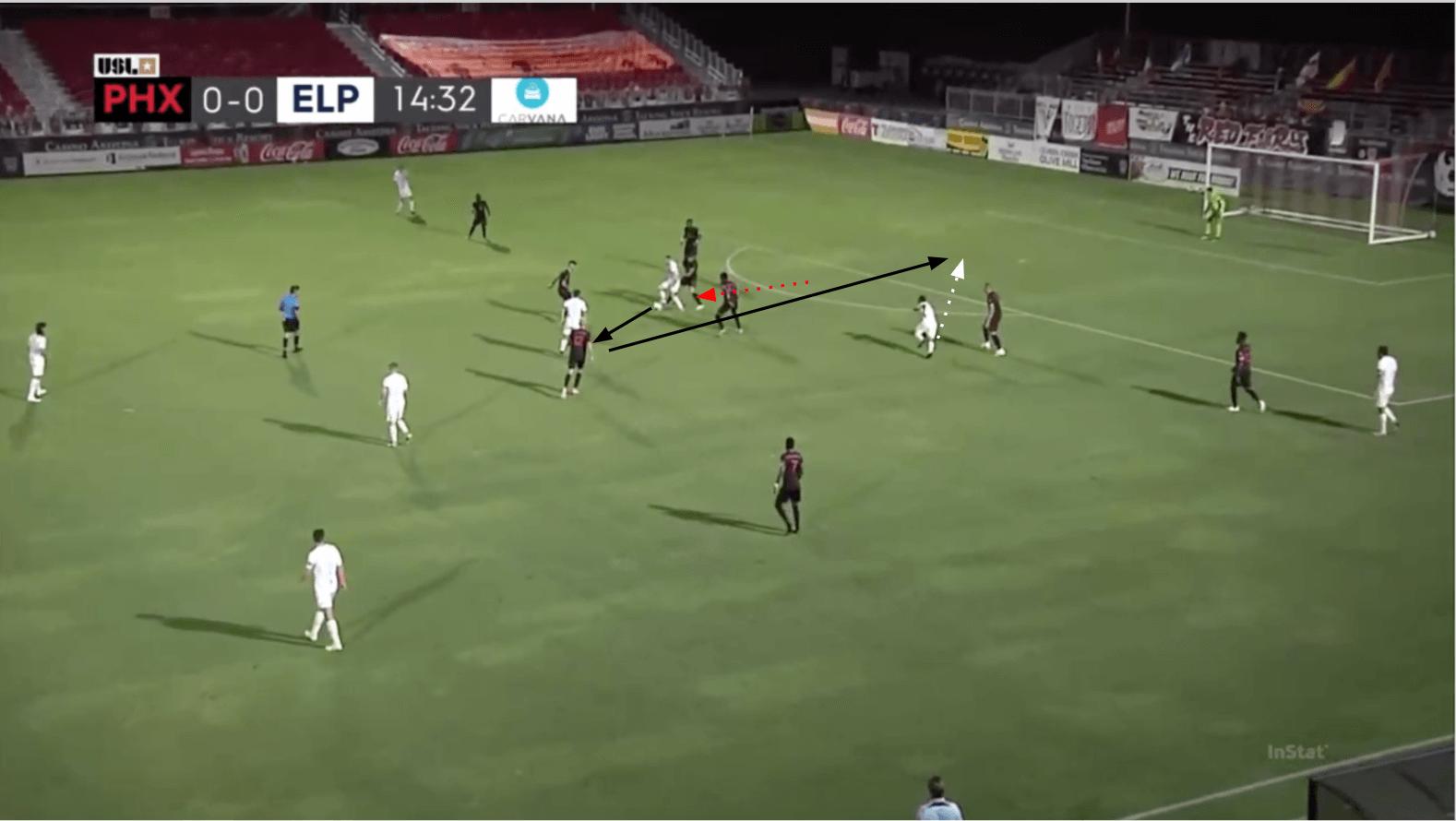 After successfully breaking through Phoenix’s press, El Paso were able to quickly play through their last line of defence. A pass was played into Nick Ross, who laid the ball off for Mares. Ross’ pass seemed simple, but his ability to make sure he was playing the way he faced and playing a pass to his teammates back foot made all the difference. Mares’ first touch with his right foot played Gómez into the space that was left open by the Rising defender Corey Whelen who went to press Ross.

While there are plenty of things that could be pointed out about El Paso’s positional play (men in between lines of pressure, how the break lines, positional relationship of their wingers and outside-backs, etc.) one aspect that stood out most was Chiró N’Toko’s willingness to dribble as a centre-back. 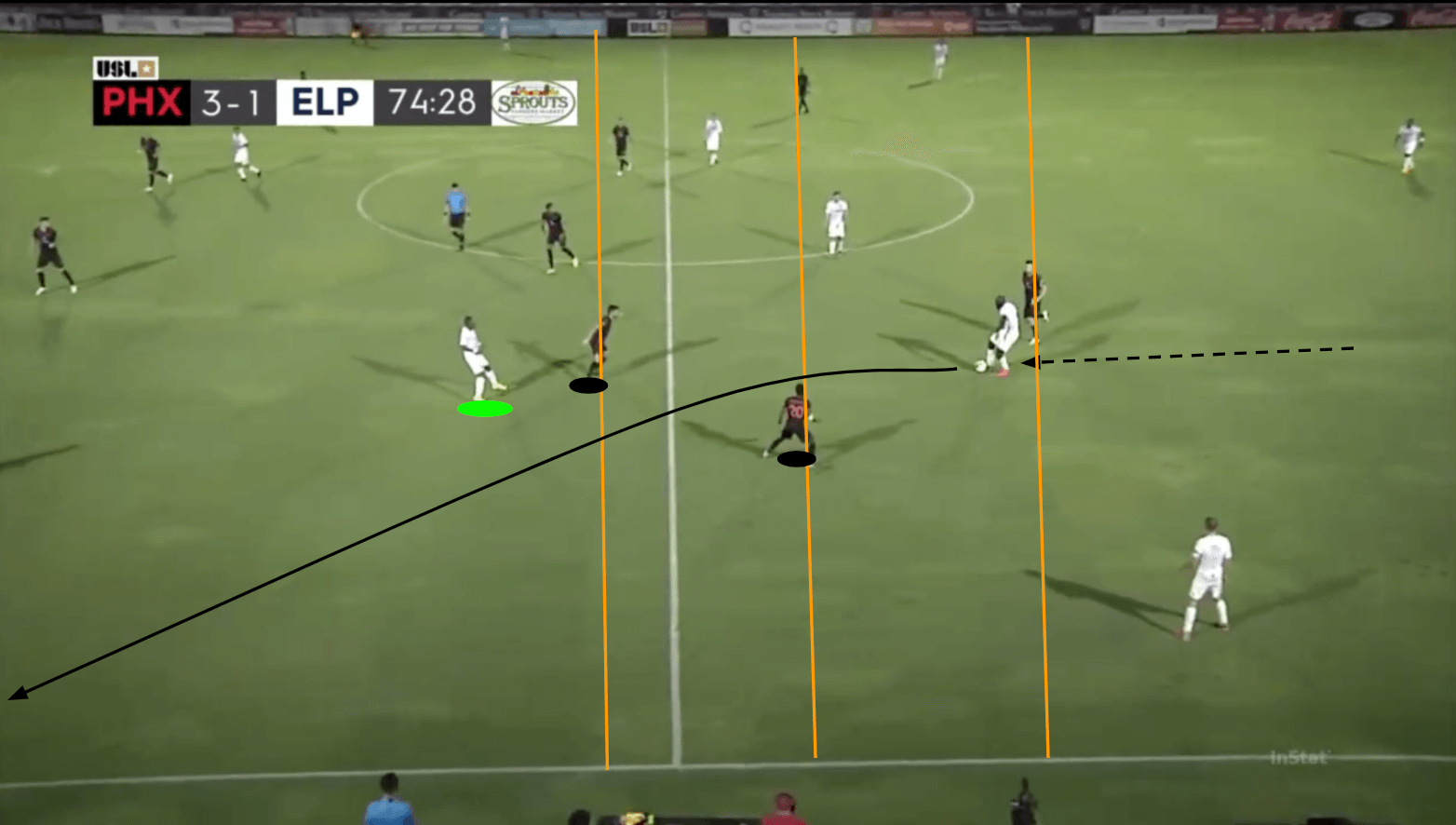 Dribbling as a centre-back can be psychologically challenging for a defender, as they’re the last line of defence with a large amount of space behind them. However, if players can do it, they create advantages for teammates by engaging opponents in the process. In the image above, N’Toko progresses past Phoenix’s first line of defence, freezing José Aguinaga and Solomon Asante (who are marked in black) in the process. Both Rising players were unclear whether to press or stick with their men as N’Toko had created a 3v2 numerical advantage. This kept the passing lane open for him to deliver a pass to his teammate on the left wing. Saeed Robinson, the player marked in green, was in perfect position to execute his third man run, and he was off to the races against Aguinaga.

Rising will certainly be happy with the three points they earned. Their excellence in transition and qualitative superiority on the wings continues to overwhelm opponents consistently. Rising will look to continue their winning ways on Saturday when they take on New Mexico United. While El Paso won’t be happy with the result, their ability to stick to their positional play and break down Rising’s press really emphasises how close they are to being a top team in the USL. They’ll look to rebound next week when they welcome Colorado Springs Switchbacks FC to El Paso.