Phoenix Rising welcomed LA Galaxy II to Casino Arizona Field on Saturday as the USL restarted its season in its new form, following leagues like Serie A and the Bundesliga. With the temperature hovering around 110 degrees at kickoff, Rising continued their winning ways, defeating LA 4-0.

This tactical analysis looks to examine the tactics used by both Rick Schantz for Rising and Junior Gonzalez for Los Dos. The analysis will look to better explain how Rising were able to continue their impressive home record despite the lack of supporters in the crowd. 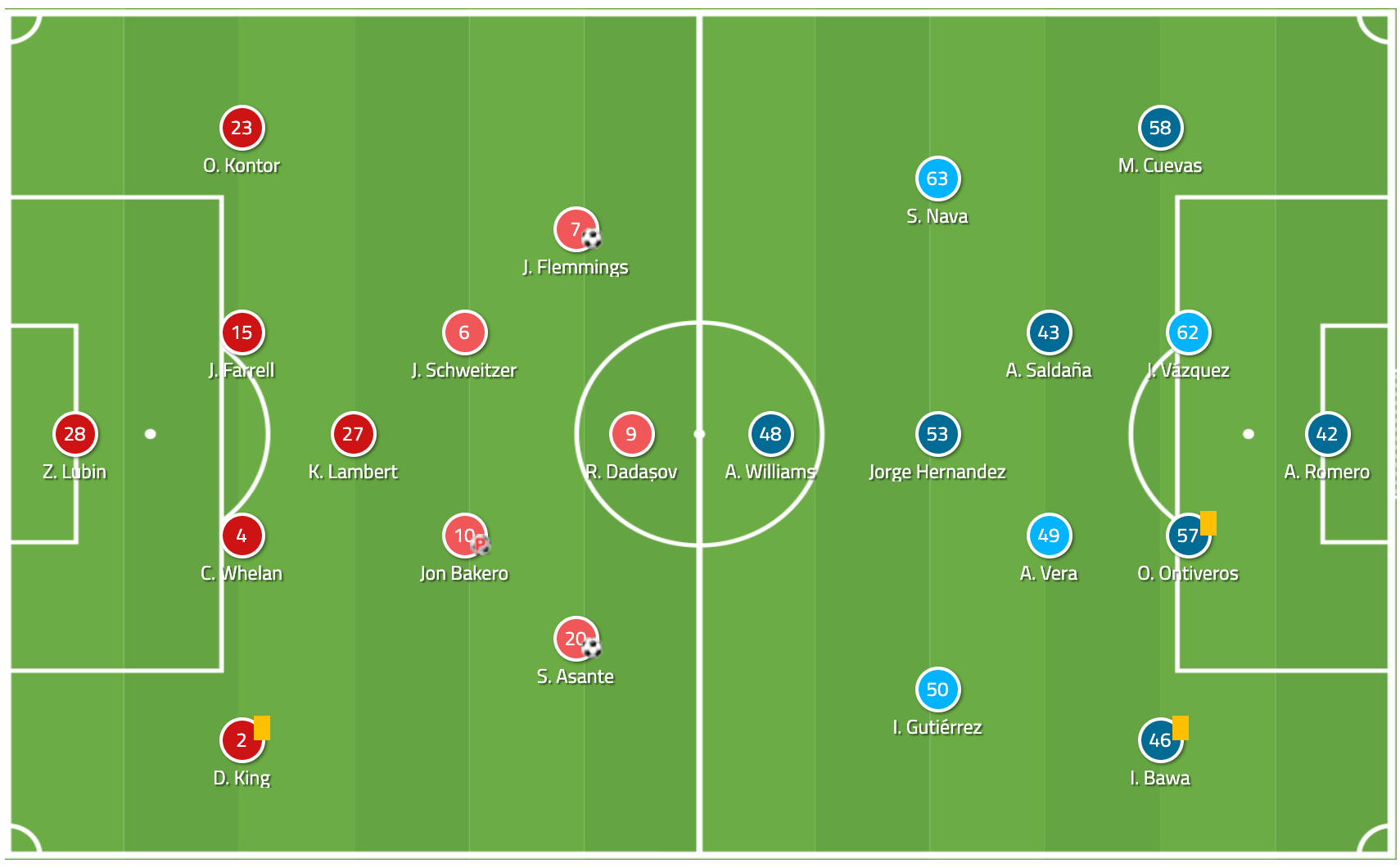 Rick Schantz sent Rising out in a Barcelona-esque 4-3-3 with Zac Lubin in goal. Darnell King, who recently joined Rising, started as the right-back, with Corey Whelen and Joe Farrell as centre-backs, and  Owusu-Ansah Kontor as the left-back. Kevon Lambert was the holding midfielder with Jon Bakero and Jordan Schweitzer as the other two central midfielders. The front three consisted of Junior Flemmings on the left-wing, Solomon Asanté on the right-wing, and new signing Rufat Dadashov as the centre-forward.

Junior Gonzalez opted for a 4-2-3-1 to counter Rising’s 4-3-3, and he started Abraham Romero in goal. In front of Romero, from the left side of the pitch to the right, were Isaac Bawa, Omar Ontiveros, Jesús Vázquez, and Mauricio Cuevas. The two defensive midfielders were Adam Saldana and Adrian Vera; in front of them centrally was Jorge Hernandez. Iván Gutiérrez started on the left-wing as Sebastian Nava started on the right, with Augustine Williams starting as the club’s forward for the match.

While Phoenix was heavily favoured in the match, some of the decision-making, particularly in LA Galaxy II’s build-up certainly did not help the team from Los Angeles out. It seemed like they wanted to build from the back, but their struggles in doing so painted a picture of a team that didn’t have a clear vision of how to do so. The first example highlights a lack of communication or expectation between teammates, shown below. 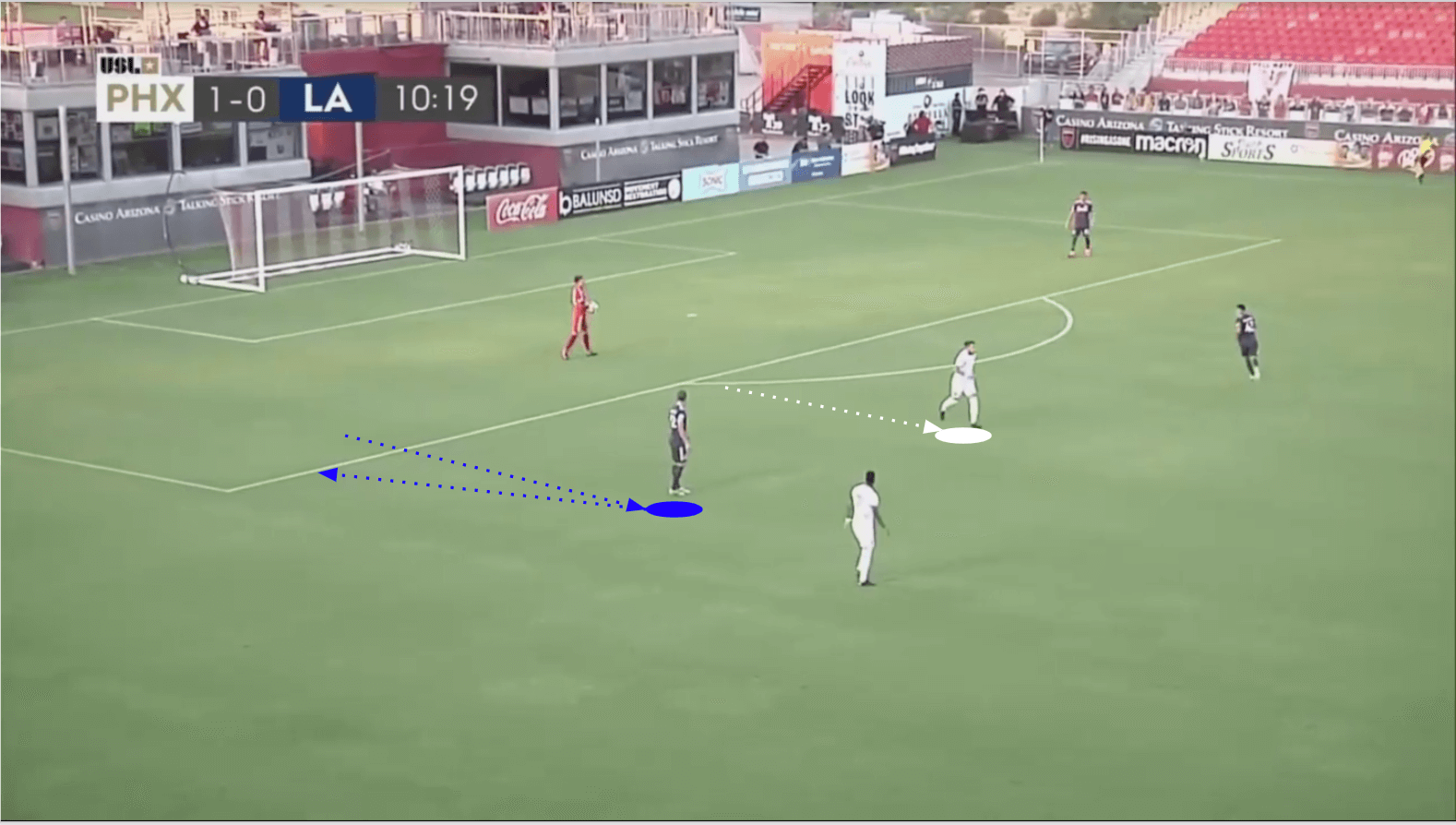 Romero, the goalkeeper, picked up the ball and began acting like he would punt it; he began looking up field and bouncing the ball. This caused Rising’s striker, Dadashov, to drop. Unfortunately for the Galaxy, this also caused Vázquez to step up. Vázquez was no longer in a position to support Romero; so when Romero rolled the ball out to Saldana, who quickly played a pass back to Romero, Vázquez was not in a position to receive the ball. He was facing his own goal with a defender on his back. This caused Romero to clear the ball up the pitch, where Rising won it back and began their attack. A couple of minutes later, LA’s troubles continued from a goal kick with a similar situation. 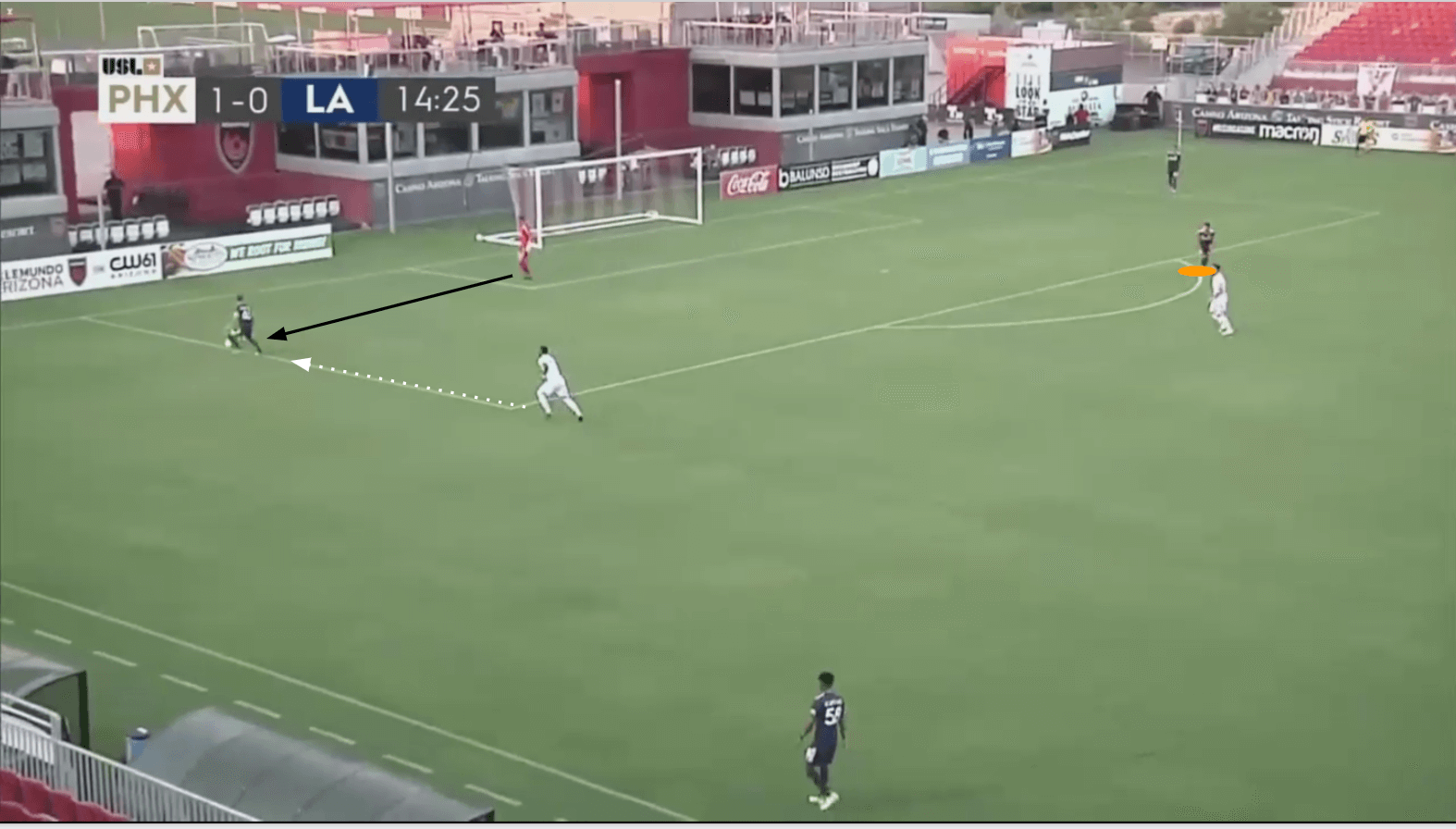 Vázquez was either not prepared for the play or Romero was playing too quickly, but either way, the pass above was made as Romero was under no pressure. This is a problem for multiple reasons. The first is that Vázquez was not even facing the right direction in order to receive a pass; he should have been facing up the field, preparing to receive the ball on his back foot. The second problem is that Saldana is in no position to support him; instead, he’s in the other half-space, much closer to the other centre-back, Omar Ontiveros. Romero should have played Ontiveros, as he and Saldana would have had a better chance to progress the ball to an outside-back. Instead, Vázquez was forced to clear the ball so that he wouldn’t turn it over so close to his own goal. There were multiple instances of this occurring, which either stems from a lack of organisation, a misunderstanding on Romero’s part, or a lack of problem-solving skills amongst the young team from Los Angeles. The lack of problem-solving stood out later in the half, when Los Dos were again trying to build from the back. 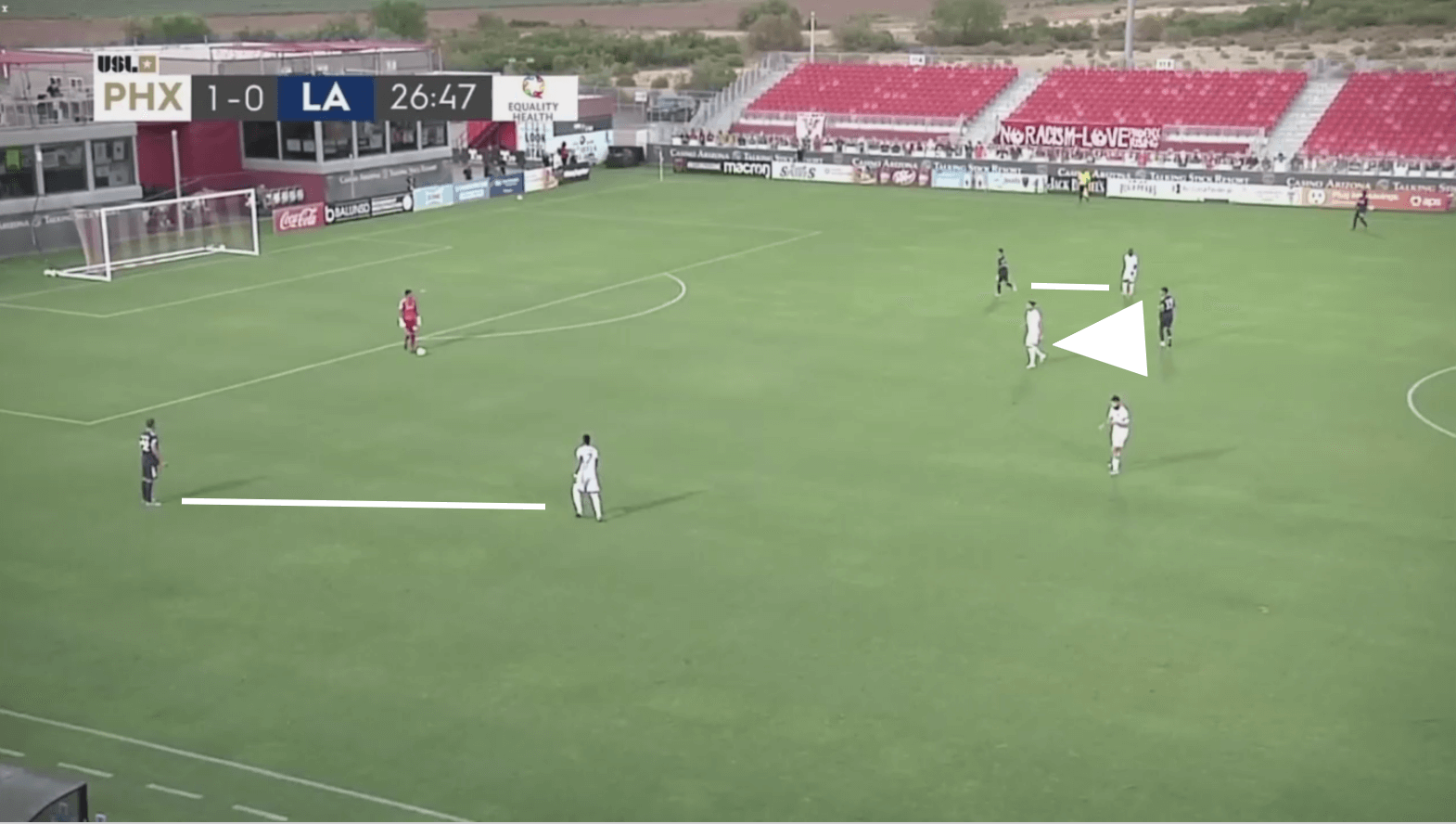 As Romero was in possession, his centre-backs have split out to either side of him. These centre-backs were marked by Rising’s wingers, and their defensive midfielder was eliminated as a passing option because of Dadashov’s excellent use of his own cover shadow. Whenever Los Dos ran into this problem, especially in the first half, they were more than willing to send the ball in over the top. Ideally, instead of having two of their central midfielders on the same horizontal line, they would have dropped one of them in order to look to overwhelm or confuse Dadashov. Despite lining up in a 4-2-3-1, Los Dos looked to build up with a single defensive midfielder. They did this without having other midfielders drop in to build a numerical advantage and create space behind them and without having any positional rotations in place. This lack of creativity killed their build-up, which in turn killed their chances in the match.

Not only did Los Dos struggle in their own build-up, but Rising compounded this frustration by employing an efficient press that often frustrated LA and led to multiple opportunities to win back the ball. Phoenix’s press also led to more opportunities for them to exploit transitions, which they fully took advantage of and will be discussed later. Phoenix looked to overwhelm LA by committing numbers forward and forcing them to play lofted passes to their outside backs. 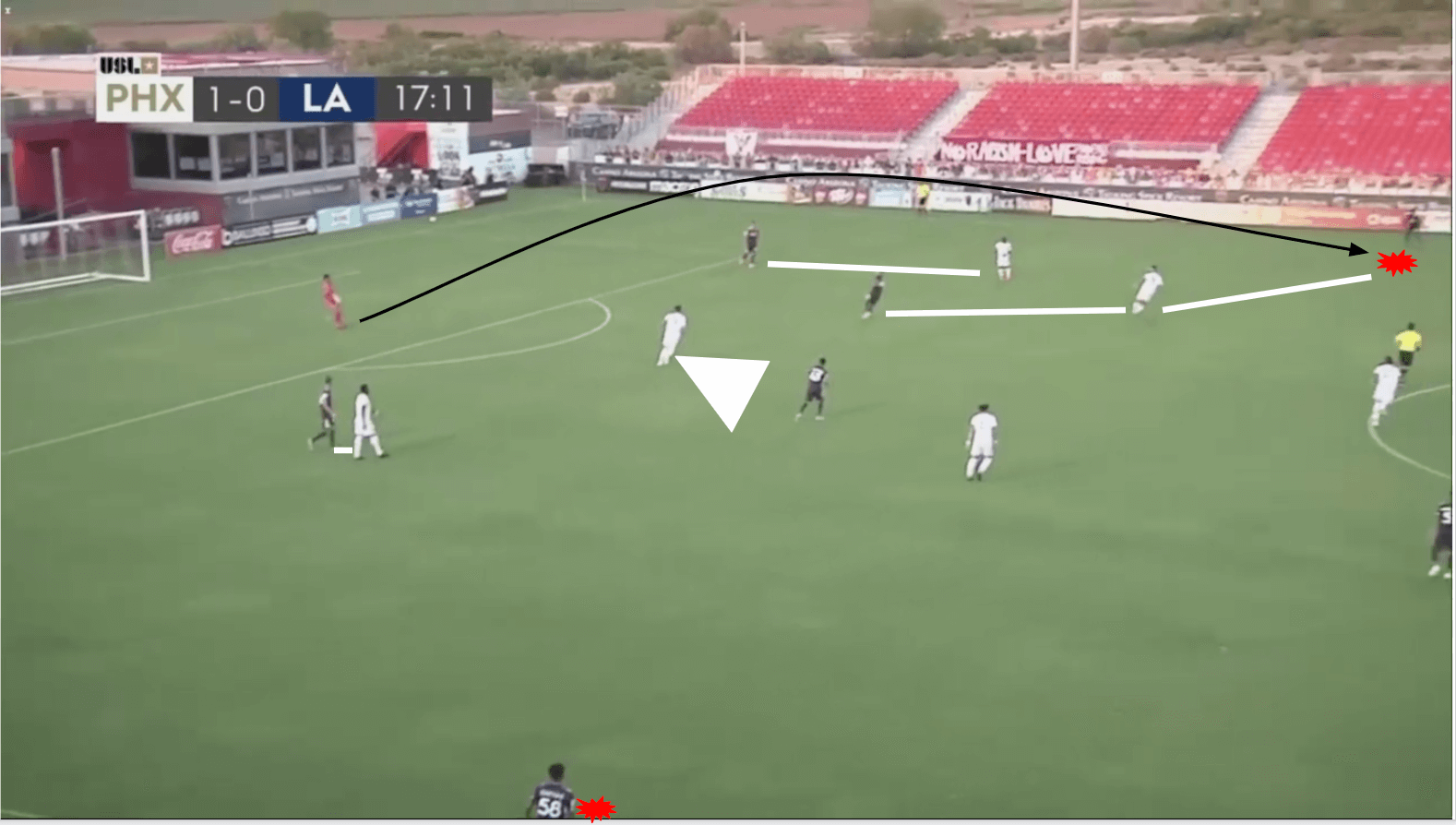 In the image above, we see Rising’s pressing structure. As previously mentioned, Dadashov used his cover shadow to eliminate the defensive midfielder as a passing option, while Junior Flemmings and Solomon Asanté marked the centre-backs. This is a huge advantage for Rising as Flemmings and Asanté are going to be much quicker than almost every centre-back in the league; this means that if teams want to build out from the back, they need to distribute the ball quickly and efficiently; otherwise, they will be punished. Jon Bakero and Jordan Schweitzer, the two central attacking midfielders would look to eliminate any potential runs back to support the build-up (which, as previously discussed, didn’t occur often). Rising left their opponent’s outside-backs open, hoping to force Romero to play an aerial pass into them, which would typically give them time and space to pressure whichever one received the pass. The example below shows the flexibility of Bakero and Schweitzer. 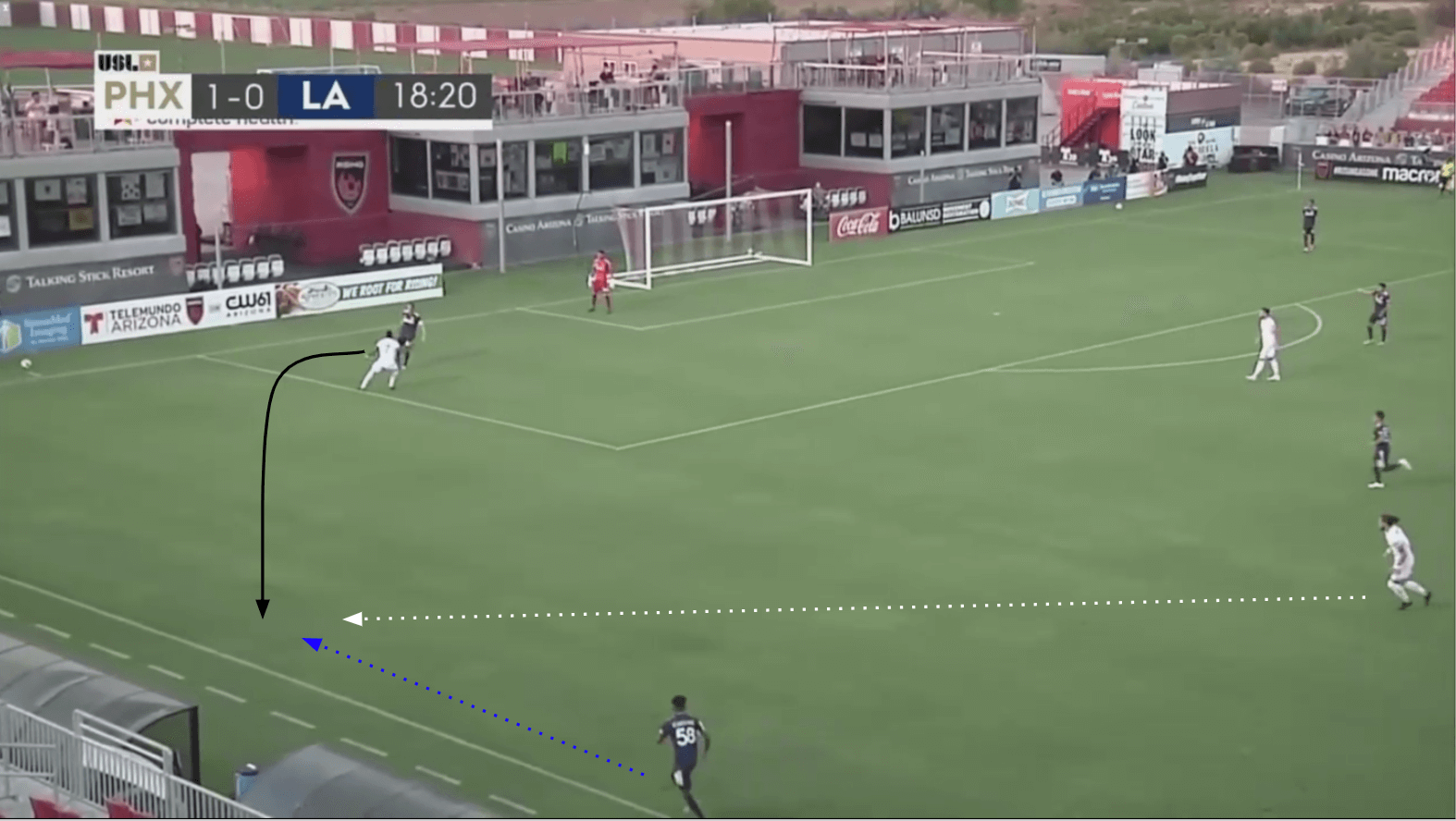 Here, Vázquez, already under pressure by Flemmings, played an aerial pass to his right-back. As the ball travelled, Schweitzer was able to close down the space due to the amount of time it took for the ball to travel. As Mauricio Cuevas looked to turn up the pitch, Schweitzer won the ball and quickly laid it off to Flemmings, who was able to drill a pass across the top of the box to an open Solomon Asanté, where last year’s USL MVP had his shot blocked by a defender.

Multiple times throughout the match, Phoenix forced the ball out of touch simply with the pressure of their front five. If Los Dos were able to find their outside-backs, they still had to look to play out of pressure, and they were often not in the correct position to do so, as shown below. 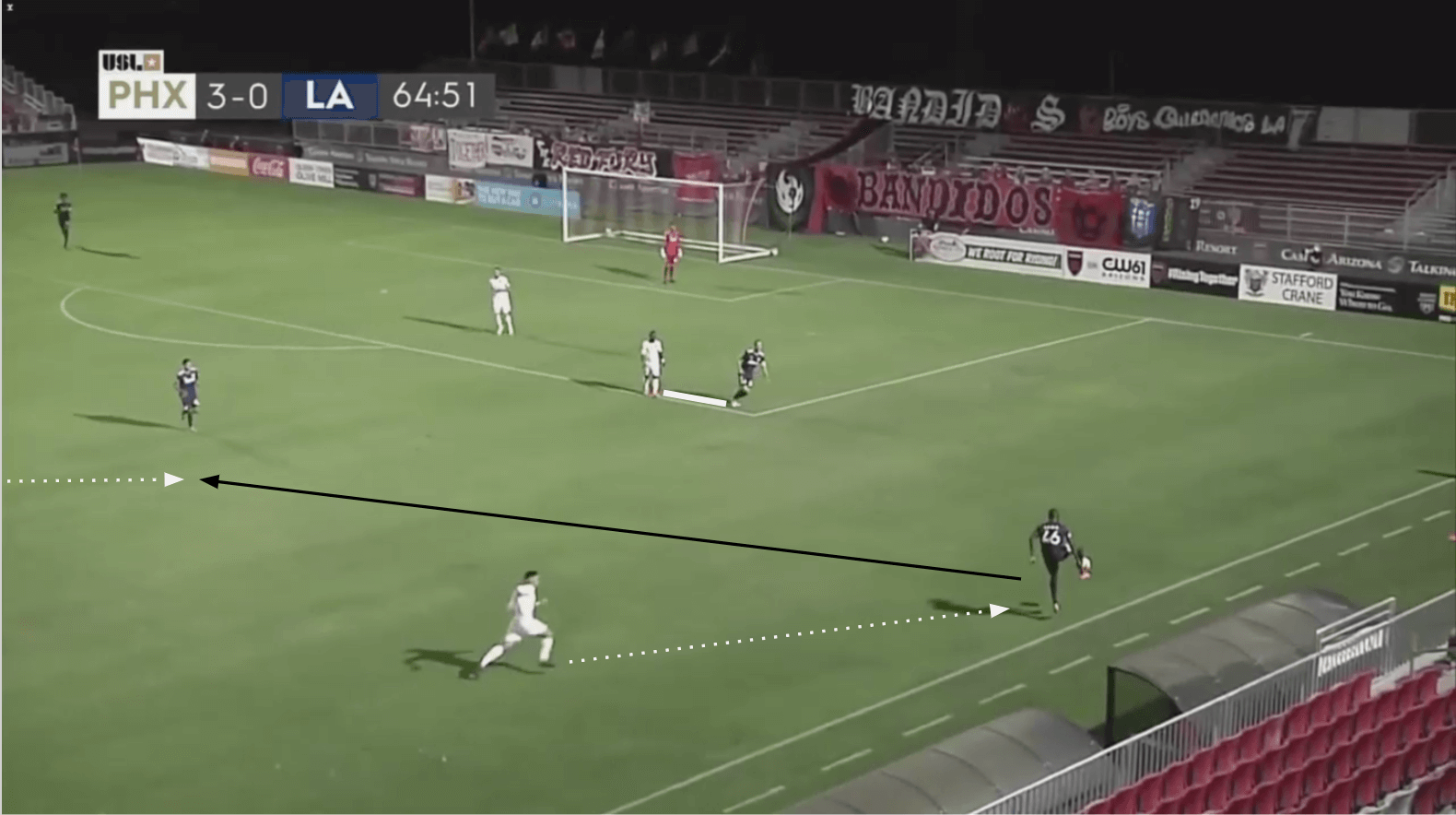 Isaac Bawa had just received an aerial pass from Romero. Bawa is not in the best of positions to progress the ball: he has yet to settle it on the ground, he is currently facing his own goal, and the only pass that seems like an option for him is to his defensive midfielder, which required him to play a pass across his body. Passing horizontally is incredibly difficult when your hips are facing a forward direction, but Bawa attempted to do so anyway, as he was about to be put under immense pressure by José Aguinaga. As Aguinaga arrived, Bawa played the pass towards the centre of the pitch, which was read perfectly by a sprinting Kevon Lambert. The Rising midfielder intercepted the slow-moving pass, using his first touch to get out of pressure and his second the play the ball to Asanté. Asanté played a quick pass to Dadashov, who found a wide-open Junior Flemmings on the back post, who was unable to score and ultimately offside. Despite the lack of a goal, Phoenix’s press was able to create more transitions from defence to attack, which they were able to exploit for most of their goals.

Phoenix’s reputation around the league is that of defensive solidity and a potent attack. These were on display on Saturday night as they took advantage of the chaos that takes place during a transition in order to score on three occasions. The first instance came within the first nine minutes, where Los Dos turned the ball over after succumbing to the Rising press. 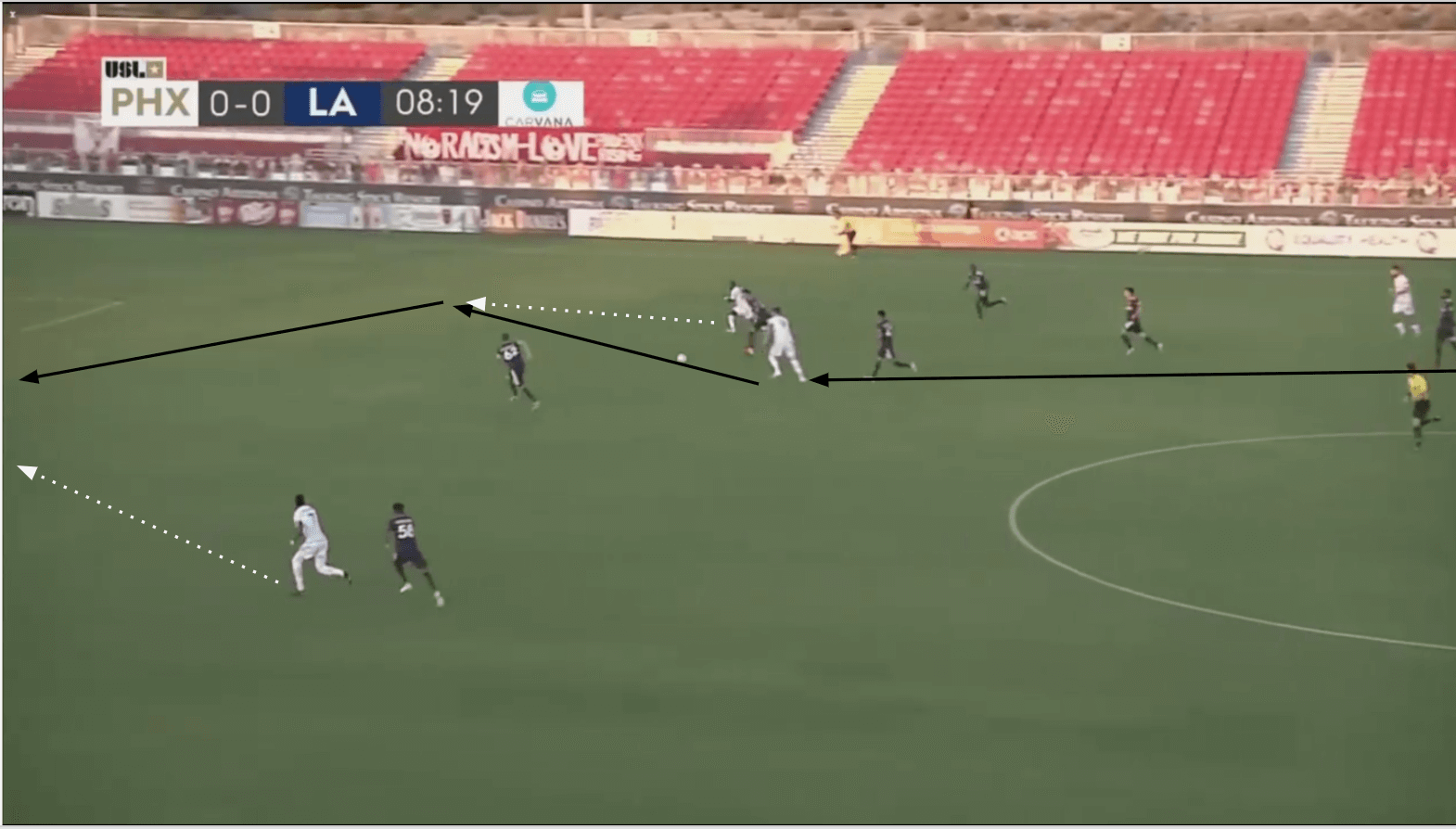 As soon as Lambert won possession of the ball, he played a long vertical pass to Dadashov, who was able to turn with his first touch. This is where the speed of Phoenix’s wingers became devastating. At the top of the image, Asanté was able to separate from his defender as Dadashov played him into space. Flemmings’ movement at the bottom of the image is the most important. His first two steps took him inside of his defender, making it almost impossible for the young right-back to catch up to Flemmings without fouling him. Asanté crossed the ball with his first touch and Flemmings finished coolly, putting Rising up 1-0.

Shortly after the hydration break, Flemmings and Asanté switched sides, with Asanté going on the left flank and Flemmings on the right. This decision to do so led to Rising’s second goal, which was a penalty kick. Despite scoring from the spot, Rising was able to get into that position because of their ability to attack during transitions. 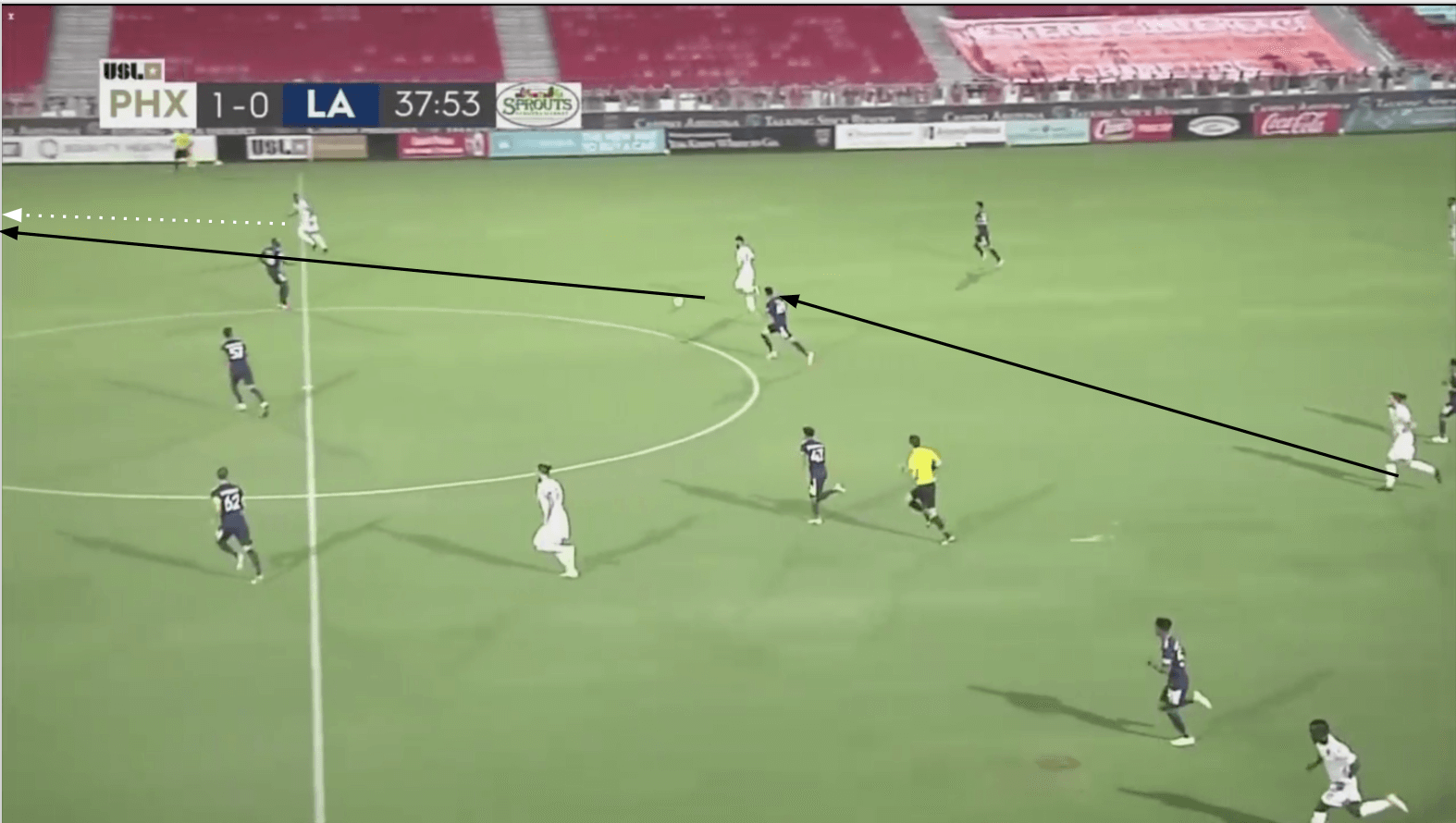 Off of a LA throw-in, Phoenix quickly won possession. Jordan Schweitzer had the ball at his feet just outside of his own penalty area in the half-space. He quickly played a long diagonal ball out of pressure to Jon Bakero, who used his first touch to progress the ball up the pitch to Flemmings. While Flemmings’ first touch wasn’t great, he quickly organised himself and dribbled at Bawa. As Flemmings made his way past Bawa, Bawa was judged to have brought him down in the penalty area. Bakero buried the penalty, and just like that, Phoenix’s first two goals were brought about because of their exploitation of transitions. If Los Dos were able to organise and get men behind the ball, Bawa would have had more support and would not have been so isolated against Flemmings.

Rising’s third goal of the match came in the first half’s extra time, where it was apparent that the heat was draining LA’s energy. This time, an individual effort was able to exploit a transition in order to score for Phoenix. 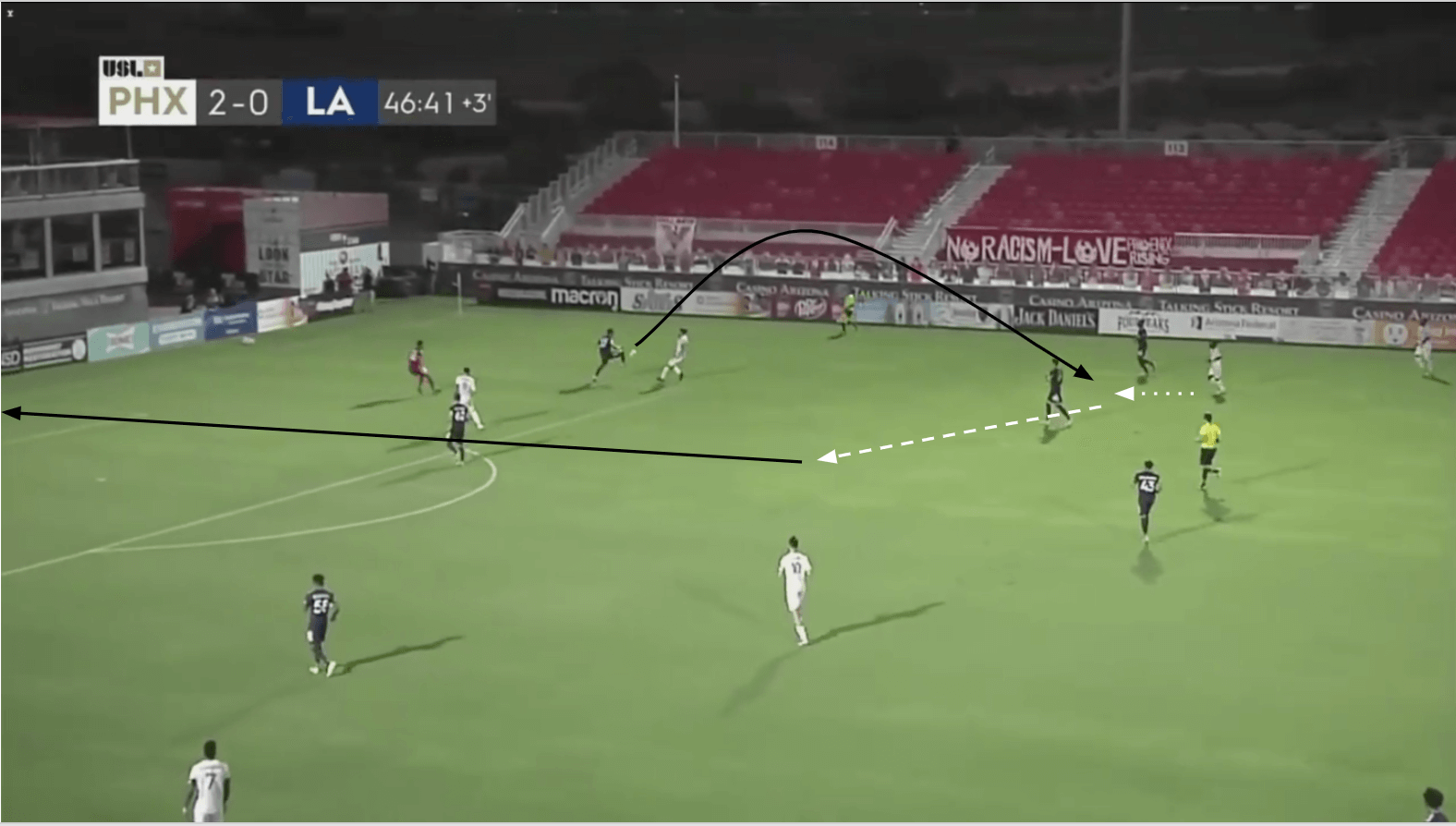 In the image above, Vázquez haphazardly cleared a ball from his back line to two of his teammates. As his team looked to get out of their own defensive half, Solomon Asanté won the ball between the two LA players. He took his first touch into space and then hit a half-volley into the back of the net, essentially burying LA’s chances for a comeback in the process.

While Rising certainly took advantage of all their opportunities, these two teams will still be facing each other another two times during their Group B play. Rising sit in second place in Group B with six points, behind newcomers San Diego Loyal SC, who currently sit in first place on seven points with one additional game played. Despite having lost multiple players to the MLS, Phoenix looks ready to continue as a dominant force in the USL for the coming months.