After pushing city rivals Espanyol to relegation with a 1-0 win, Barcelona travelled to José Zorrilla Stadium to face Real Valladolid on round 35 of La Liga. Former Real Madrid star Ronaldo’s club, Real Valladolid came in to this fixture following a 2-1 loss at Mestalla against Valencia. Although Barcelona eventually came out as the winners with an Arturo Vidal goal, Quique Setién’s side showed some promise in the first half only to expose their existing problems in the second.

In this tactical analysis, we will look at how the teams lined up and how Barcelona’s fast-paced build-up in the first half helped them excel. Similarly, we’ll do an analysis of Real Valladolid’s build-up tactics and why they found it comfortable to attack and advance forward in the second half.

The home side, under Sergio González Soriano, initially lined-up in a 4-3-1-2, which later was adopted into a 4-3-3. Barcelona academy graduate Jordi Masip started in goal, covered by Raúl García, Javi Sánchez, Kiko Olivas, and Javi Moyano as the back four. Rubén Alcaraz, Joaquín Fernández Moreno, Fede San Emeterio started on the mid-field diamond with Kike Pérez. The front-two were Óscar Plano and Sergi Guardiola, taking on Barcelona’s defence. Interestingly, Barcelona started with a 3-5-2, a formation that was frequent in Quique Setién’s early days at the Camp Nou. With full-backs Nelson Semedo and Jordi Alba offered an advanced initial role, youngster Riqui Puig started in alongside Sergio Busquets and Arturo Vidal in the midfield. Sergi Roberto supported Clement Lenglet and Gerard Piqué to complete the back-three. Antoine Griezmann started the match alongside Lionel Messi to trouble the Valladolid defence.

With a 3-5-2 formation in operation, Barcelona looked to make their long-standing problem of slow transitions fade away. Barcelona extensively used Roberto and Lenglet to supply passes to advanced wing-backs and create attack from wide areas. As we can see here, Barcelona are directed to get narrower towards the front line and wider in midfield, aiming to operate from wide and then get the ball to narrow forwards. 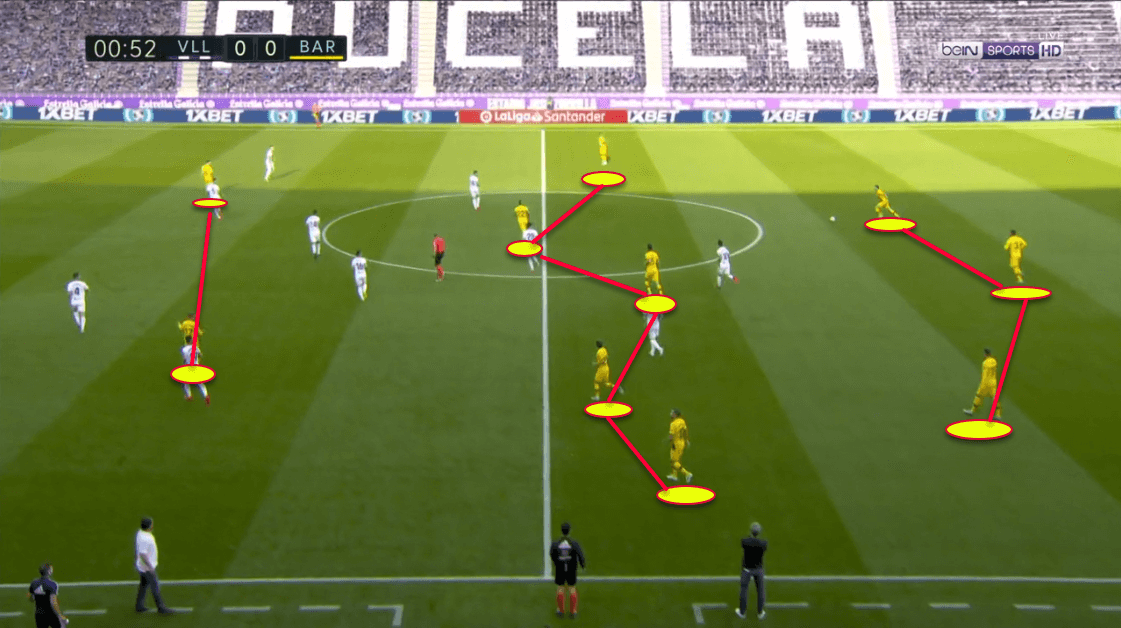 During the build-up, Sergio Busquets always remained close to the last line, in order to ensure the ball-carrier always had at least two players free from the opposition press. At times, Busquets was used to draw press whereas his main purpose was to receive from the deep and spread play into spaces. Barcelona looked sharp in advancing the ball from both the flanks. Here, in this instance, Barcelona opt to move from the left, considering that Roberto and Busquets occupy the opposition forwards. Similarly, Lenglet and Alba are the two options that are free to receive. With Jordi Alba getting a more liberal role to make runs and go forward, Barcelona did get a functional left side yet again. With a technical ball-carrier like Puig, Barcelona took advantage of Alba’s wide operation and Griezmann’s link-up abilities to play between Valladolid’s lines. Barcelona were comfortable with the possession and movement of Arturo Vidal towards the centre when Messi moved towards right side made the switch to the right side possible as well.

However, the highlight of Barcelona’s build-up play was the right flank, which saw Sergi Roberto, Semedo and Vidal link-up to land the ball inside the box. 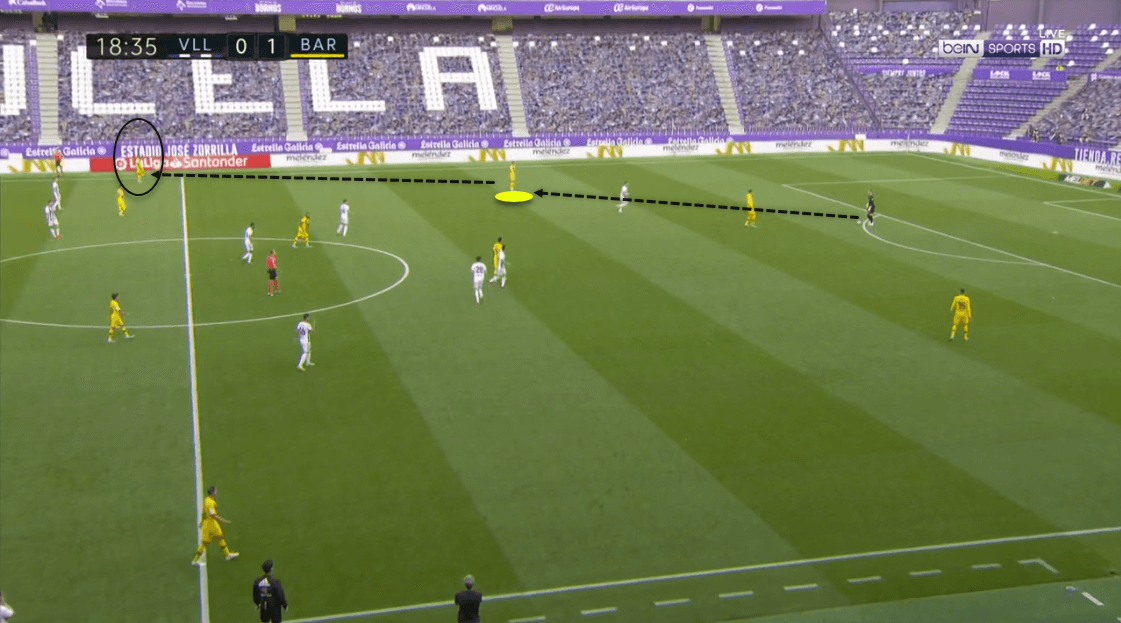 As usual, Barcelona utilised their keeper to probe spaces in the outfield. As we can see in the instant, the keeper sees Sergi Roberto behind the opposition forward, shielded by Piqué. The keeper then lofts the ball to find Roberto, who has an advanced man in space to pass forward. 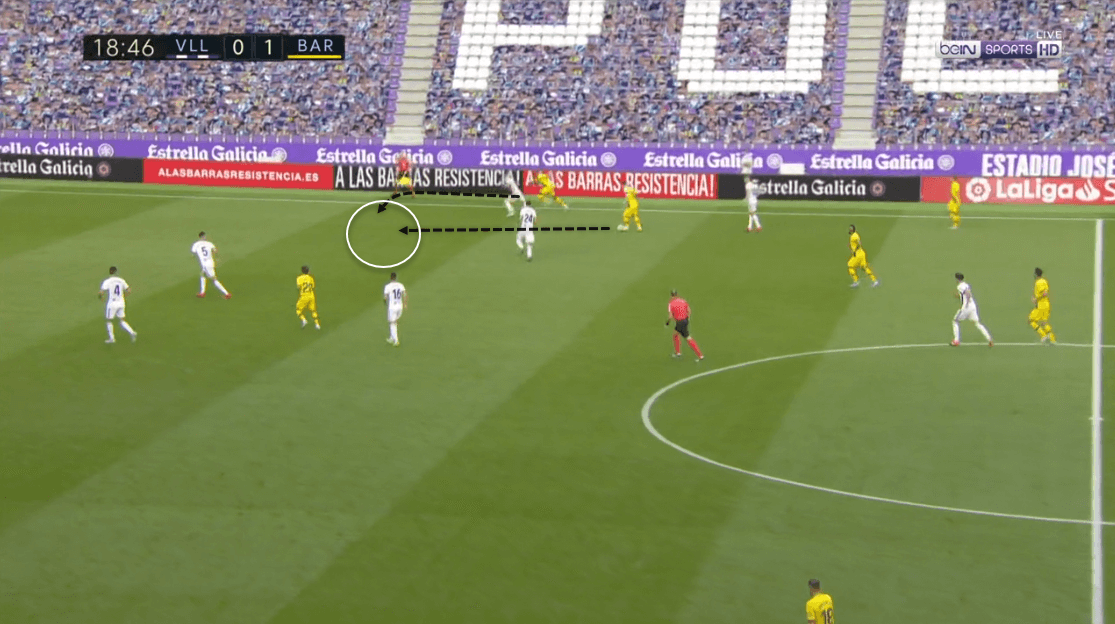 With a proper passing channel available on the right side, Semedo was able to execute one-twos with the fellow players. In this case, he makes an overlapping run into the space following a one-two with Messi, who then gives the ball back to him in space. Utilising his capability of making runs, Semedo landed balls for forwards to shoot on the opponents’ goal. 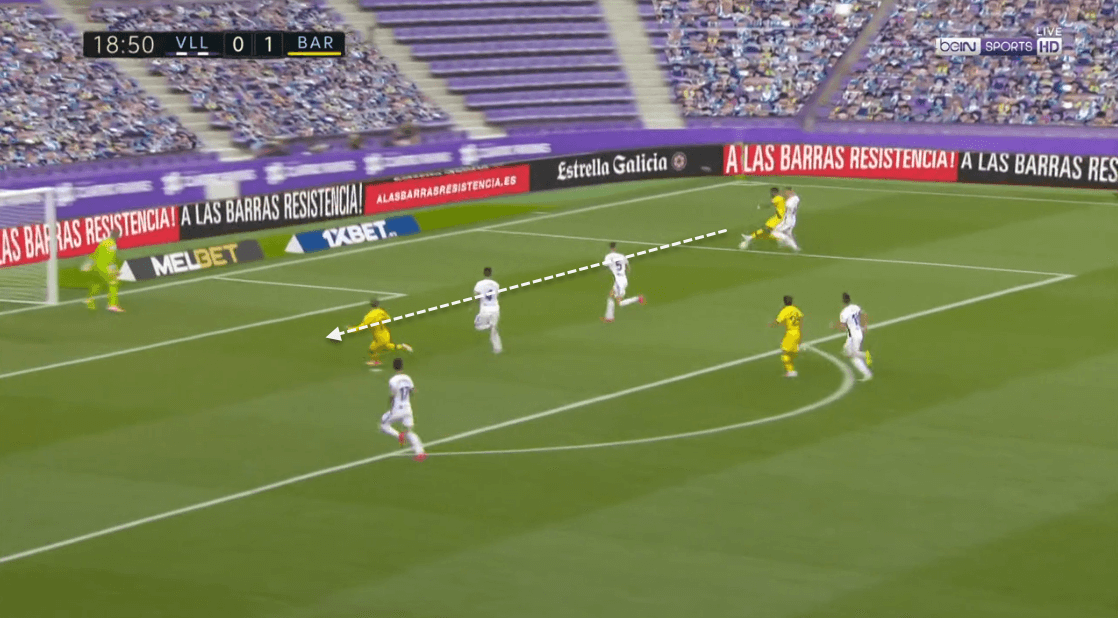 As a result of the previous move, as we can see, Semedo is able to find Griezmann in the box, who makes run from the other wing to find Semedo’s pass. Barcelona’s only goal of the match was scored following a similar approach, as the build-up from right flank was effective and was able to penetrate Valladolid’s last line of defence.

While Barcelona preferred to advance with short passes and triangles at the right side of the pitch, Real Valladolid looked to utilise the spaces in Barcelona’s off-the ball shape to play the long balls. Valladolid’s 4-3-3 structure both on and off the ball helped this process as well, as they were symmetrical throughout the vertical region, making them easier to exploit both central and wide spaces. The Valladolid formation was always directed to cover-up spaces in the pitch, making sure they recover the ball in spaces and start the build-up using those spaces. A fair distribution of short passes were exchanged whenever they spotted spaces in the midfield. Creating an overhaul in the vacant space, Valladolid tried to inspect spaces in an advanced position and then land the ball to the space using long passes. 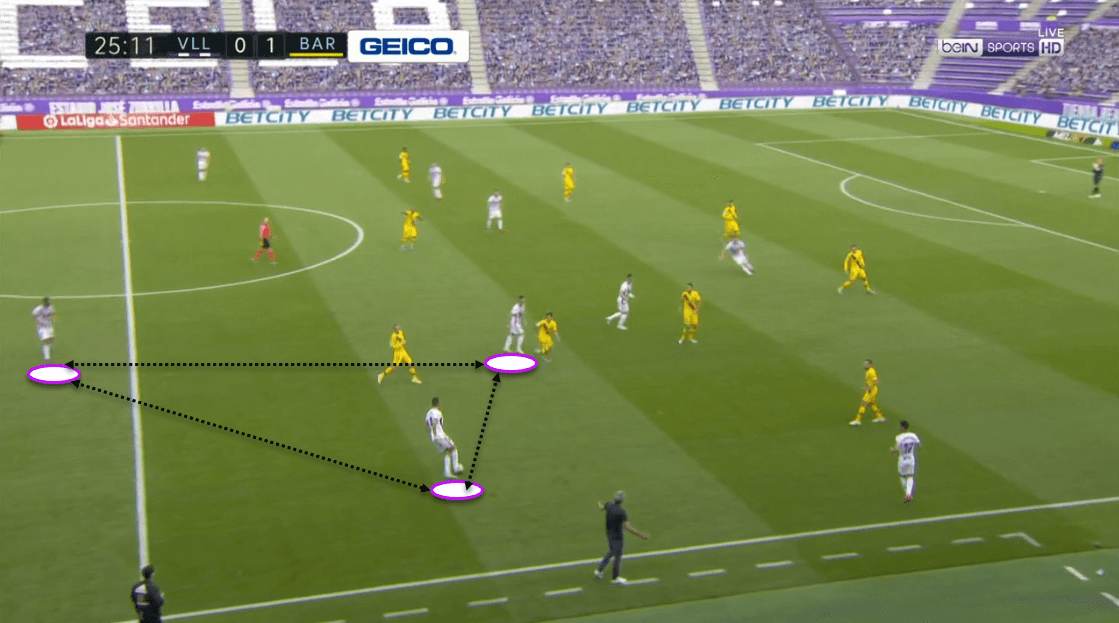 As we can see above, three Valladolid players towards the right are in close proximity to each other, creating a 3v2 situation in that side of the pitch. Similarly, a wide player in a more advanced position is visible, who can exploit the space behind Barcelona’s advanced wing-back to make a run. 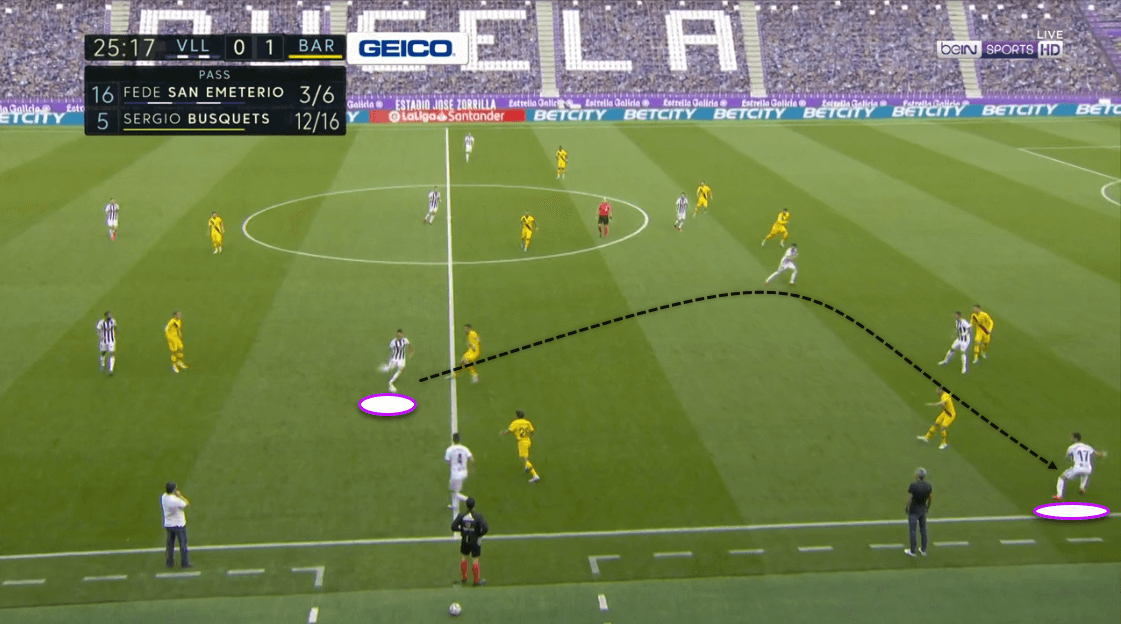 A similar thing happens in this move as well with Valladolid ball-carrier drawing the two defenders and executing a late pass to the wide player, who makes run behind Jordi Alba. Valladolid tried to exploit this area of the pitch often, but failed to make a mark as they were not able to effectively capitalize with the final balls. Similarly, with change in Barcelona’s formation, Valladolid went out with a different approach, which we will discuss as the analysis progresses.

In the first half, Barcelona’s two key players supplying the ball to both the flanks’ build-up were Puig and Roberto from left and right respectively. This becomes further evident when we look at their individual pass maps:

It is noticeable that both the players provided essential link-up required to keep the ball in possession, as well as limit spaces for the opponents to press by maintaining the numerical superiority. However, with substitutions, Puig was taken out and the team shifted to a 4-4-2, drawing back Semedo to occupy the right-back position and Sergi Roberto to operate from left-hand side of midfield. This, again, made Barcelona’s transition problems come alive. Barcelona were not able to penetrate and create spaces, as well as left plenty of space in the middle for Valladolid to counter their approach. 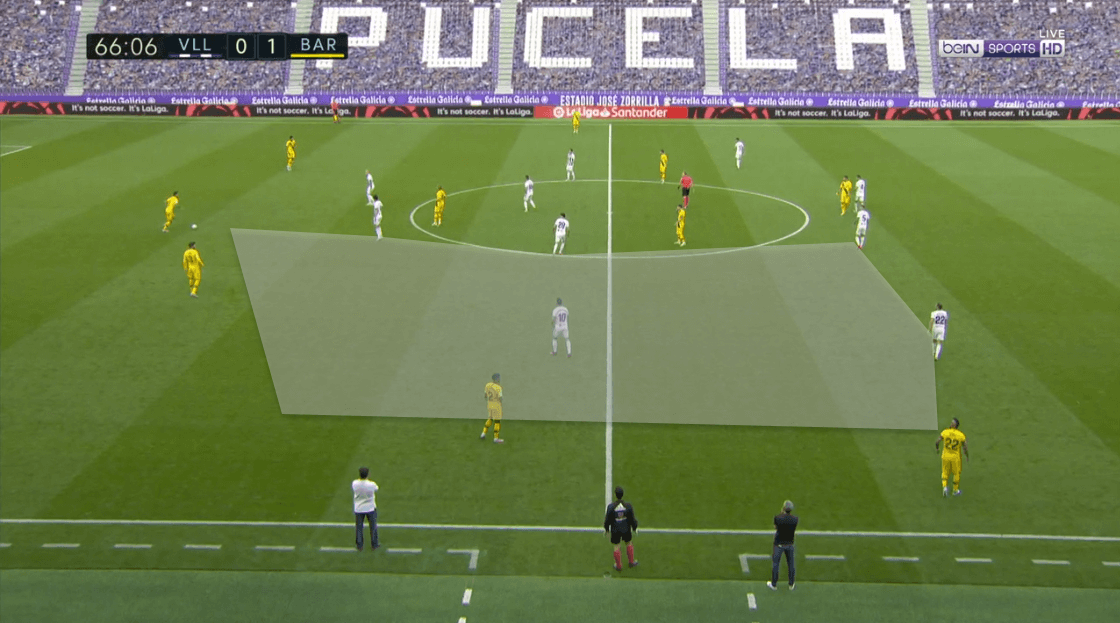 Barcelona had to create an overhaul to proceed the ball in absence of creativity that Puig and Busquets possess. Hence, on the other side of the pitch, they were left leaving space for Valladolid to operate freely after a recovery. In the instance above, the overhaul on the left has left the entire right half-space free for Valladolid to defend and counter effectively. Hence, following a recovery, we can see Valladolid advancing through the spaces created by the overhaul. In addition to the spaces, this approach made their players position themselves to create more passing option forward and Valladolid ended up attacking via central route more often in the second half.

Hence, Barcelona’s decision to switch to a 4-4-2 not only made their transitions slower, but made Valladolid’s attempt to cover up spaces and play through them effective. If we look at the both the sides’ average position map, it becomes evident that Barcelona’s substitution made things easier for Valladolid to advance the ball, as Valladolid’s player position is more distributed as compared to Barcelona. 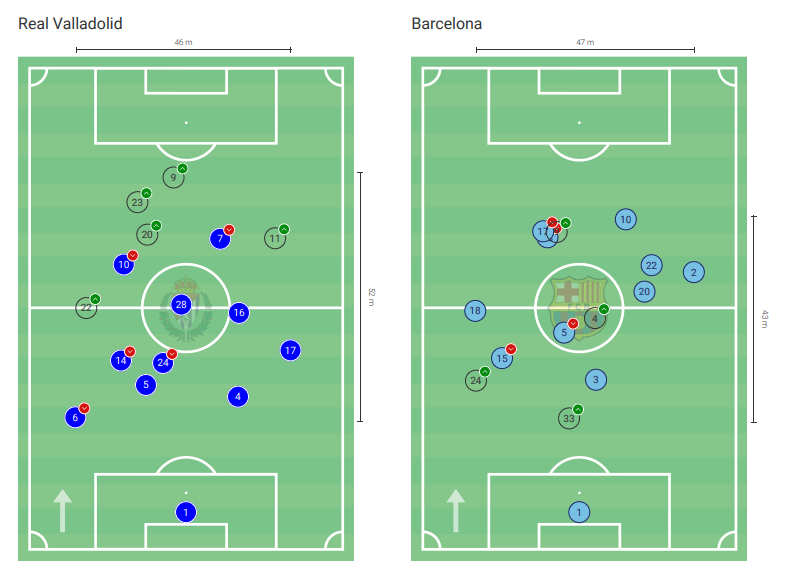 However, failing to capitalize their chances and ineffectiveness in the final third meant Barcelona survived the game with Arturo Vidal’s goal. Despite a diminished second-half approach, the Blaugrana restored their 3-5-2 when Ronald Araujo was subbed in, making the team comfortable yet again towards the end.

Quique Setién will be happy with the clash, as this tactical analysis pointed out, the first half showed how Barcelona’s problems can be temporarily addressed whereas the second half was all about knowing the limits of the team. Similarly, Real Valladolid, despite a better second half will be satisfied with what the side did overall. With La Liga getting closer to its conclusion soon, Barcelona will now look to win their remaining fixtures and wait for Real Madrid to see if their luck gets them the title.