This MLS matchup saw Inter Miami, whose owner is David Beckham, the former Manchester United and Real Madrid star, travel to DC United where the visitors were looking for their franchise’s first win in the league. After returning from their trip to LAFC empty-handed, the league debutants had much higher hopes against DC. DC United were also looking for their first win of the season after losing out to the Colorado Rapids in match week one.

The side saw Inter Miami take an early lead through Rodolfo Pizarro in the second minute of the match. However, a handball in the buildup to Inter Miami’s second goal saw the goal disallowed and Román Torres being handed a straight red card. Within the next seven minutes, Inter Miami’s game collapsed after they conceded two set-piece goals. This tactical analysis will attempt to outline how this match played out from a tactical perspective. 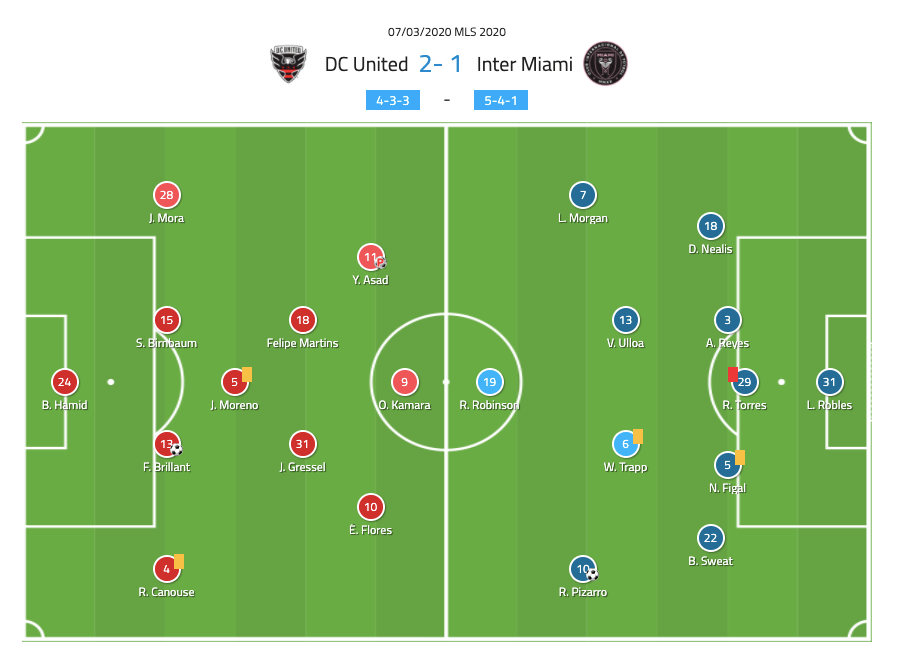 Bob Olsen made limited changes to his DC United side that lost to Colorado Rapids during match week one. While he stuck with his 4-3-3 formation, Ulises Segura was dropped in favour of Yamil Asad.

Inter Miami, on the other hand, had a new look. Against LAFC, Diego Alonso’s side lined up with four at the back. However, this time they opted to line up in a 5-4-1. To accommodate this, Matías Pellegrini and Alvas Powell were dropped for Andrés Reyes and Dylan Nealis. This formation is a variation of Inter Miami’s tactics during the final minutes their match against LAFC, with a few tweaks.

Inter Miami kept themselves very narrow and compact when defending, making it difficult for DC United to break them down centrally. Their block of five defenders had another block of four in front of it when defending DC during sustained periods of possession. During these defensive periods, two of Miami’s wide attackers would tuck into the midfield block. Here is their shape when defending centrally. 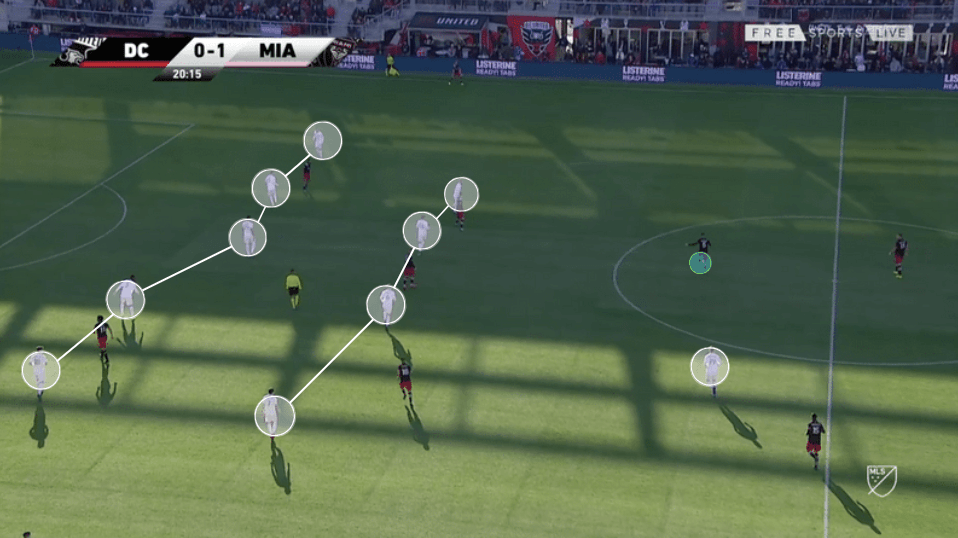 This made it very difficult for DC to build through the middle, often resorting to wing play or long balls into space. When the ball was played into wide areas, Inter were able to send out two or three players while maintaining a high number of bodies centrally. We can see an example of how DC United defended in these scenarios in the image below. 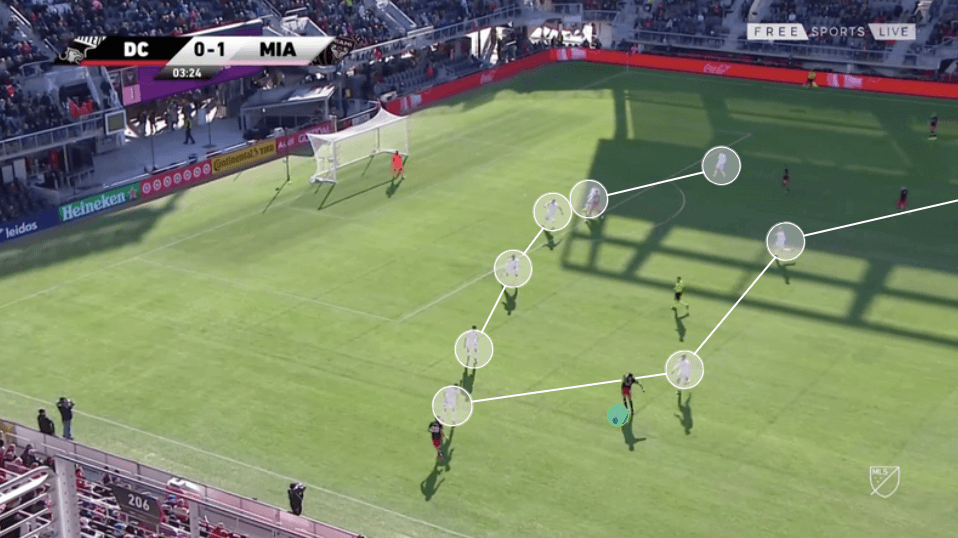 DC United were also disciplined in their decision to step to the ball. When a ball was played centrally, between Inter Miami’s lines, one of Inter’s defensive five would step out to prevent the player from turning and attacking the space.

We can see an example of this below. With Jorge Figal out of position, in the midfield during the transition, Ben Sweat tucks in centrally as Wil Trapp moves into the left-back position. As the ball is played into Edison Flores, Trapp steps to him, forcing the ball to be played backwards. 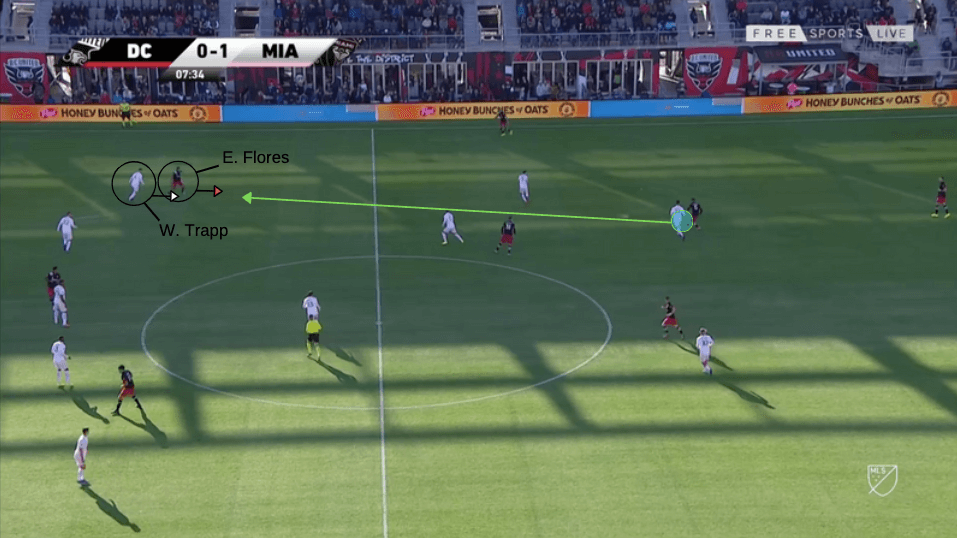 After Julian Gressel receives the ball, he attempts to bypass Inter’s wall of defenders with a ball over the top. However, his target is left isolated trying to beat Inter Miami’s three central defenders. The side’s impressive defensive structure and discipline were key to their success defending. 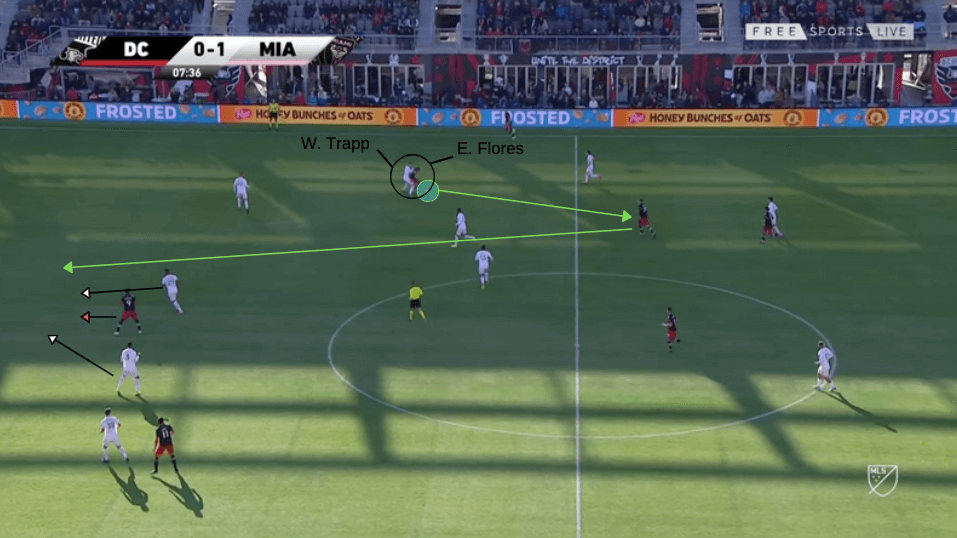 When DC United quickly countered, Inter stayed quite tight defensively, limiting any clear cut opportunities to dribble at the net. We can see, from an example below, how Inter Miami shaped up when defending the counter. What is important to note here, however, is the compactness of DC’s attack. Their narrow shape made it much easier for Inter to defend. The image below visualises how much space there was available on the wings. 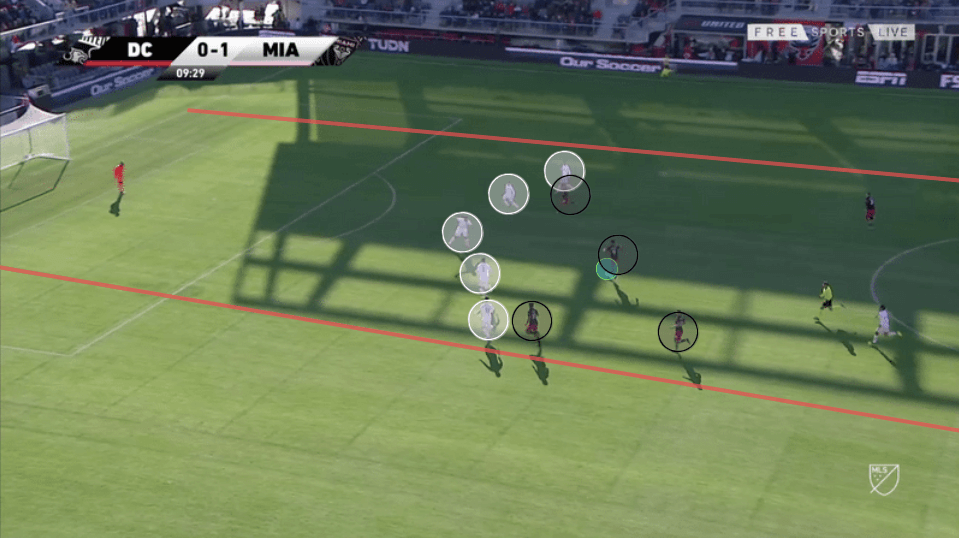 However, after Román Torres was shown a red card early in the second half, the game changed dramatically for Inter Miami. The side conceded two quick goals directly after the sending off from a penalty kick and a free-kick.

After the red, they kept two players further advanced when defending. This would allow them to quickly counter up the field if they won the ball while keeping a block of four and three goalside of the ball when DC were in possession. They didn’t find too much success with their counter, however, with DC United prioritising defending after taking a lead in the game. 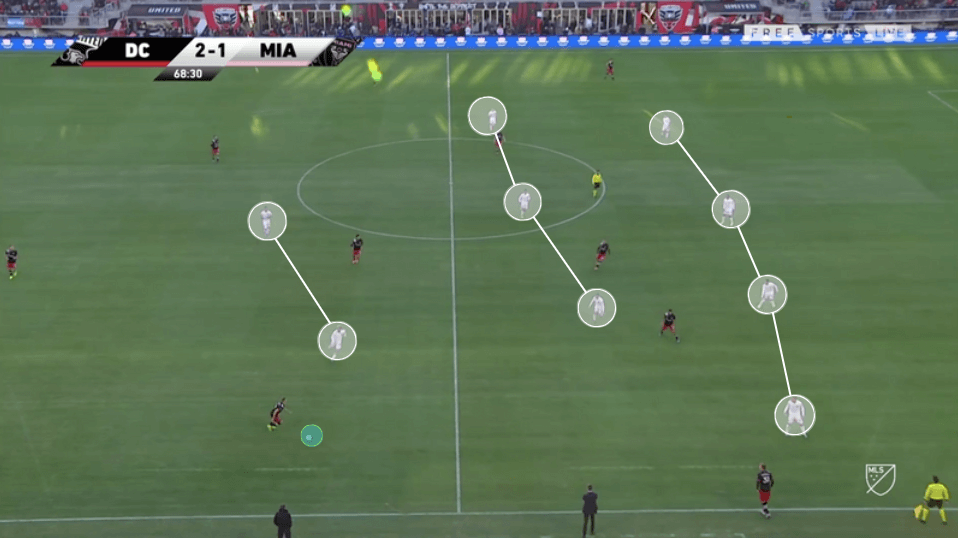 What made Inter Miami such a potent threat in this game was their counter-attacking football. While they only managed to score one goal, their chances could have justified a few more. Had their finishing been better, or DC United been less effective at last ditched tackles in the box, the final score could have been much different. In fact, Miami had a higher xG than DC United. They had an xG of 1.72 compared to DC United’s xG of 1.26. But let’s take a look at how LAFC attempted to counter-attack on DC.

Despite taking a lead in the second minute, through Rodolfo Pizarro, the visitors could have opened the scoring even earlier in the match. In the first minute, Pizarro picks up the ball centrally and carries the ball forward while driving at the defenders. Robbie Robinson and Lewis Morgan are connected with Pizarro, also driving at the defensive line. Morgan drives into the space out wide, with Pizarro playing the ball into space for him to drive into. 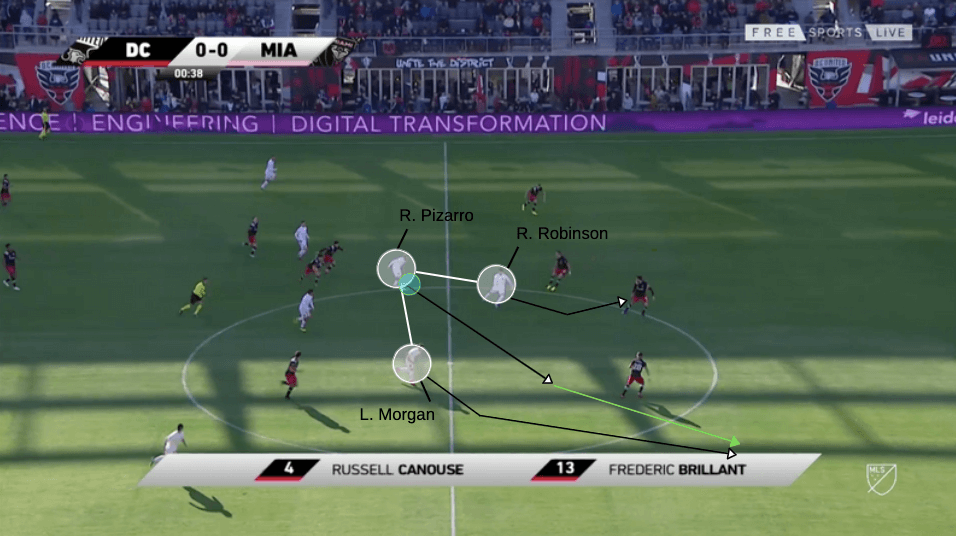 As the trio approach the 18 yard box, Pizarro holds his run, creating space for Morgan to play the ball back into him. As the ball is played into Pizarro, he passes the ball to Robinson on his first touch, who hits the ball over the net. 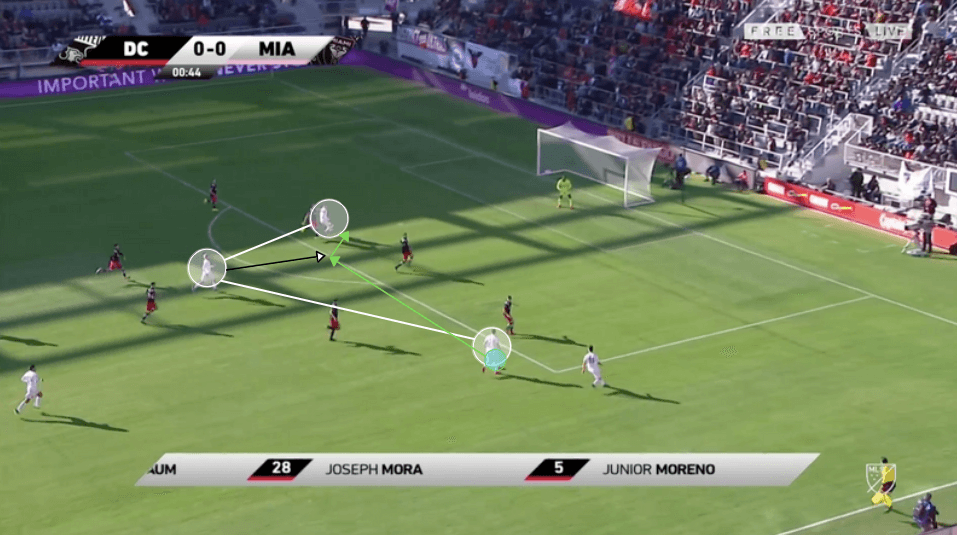 But what is important to note in this sequence, and what was a theme in Inter Miami’s counter, is the connectivity of Miami’s front three. The trio stayed close during their buildup, not relying on width to create space. Instead, it was all about attacking at pace and moving the football within their triangle.

Because Inter Miami committed limited players on their counter, creating width in their buildup would have left their attacking players isolated. While their narrow attack allowed DC United to remain compact, their ability to quickly move the ball and anticipate each other’s movements made them a potent threat nevertheless.

Despite Inter Miami looking like the most dangerous team during the first half, everything changed when Román Torres was sent off early in the second half. As soon as Torres was sent off, Miami conceded two quick goals, forcing the league debutants into a position where they had to chase the game.

The penalty kick was a fluke mistake while the free-kick was poorly defended after Frédéric Brillant was the first to react to the initial shot off the post while Inter Miami’s defenders stood and watched.

After this quick succession of events, Miami were now in need of a goal. This also meant DC United didn’t have to chase the game themselves, meaning they were able to commit fewer players forward during their attack, leaving them less exposed to Inter Miami’s quick counter. Inter Miami’s solution was quite simple. With Torres’ dismissal, they reverted to a back four, keeping the rest of the team’s shape relatively unchanged.

Because of this, DC United were able to see out the game without committing too many players forward, making Inter Miami’s counter-attack, that we discussed earlier in this analysis, less effective.

As we mentioned above, Inter Miami reverted to a back four when defending, which, in turn, made it much easier for DC to possess the ball. They saw out the match as the dominant side, with Inter Miami struggling to create many more meaningful chances after going a man down.

While Inter Miami’s tactics sent them into the break as deserved leaders they couldn’t see this match out. Many would argue that the decisions made by referee Rubiel Vazquez to send off Torres was a harsh one, and ultimately, one that lost Inter Miami the match. Had the foul not been given, Morgan’s goal would have stood. And had Torres stayed on the field, perhaps the side would have seen out the match and achieved their first MLS side.

Both sides will take positives out of this match. Diego Alonso will likely feel confident that he has found success in his team’s new tactics, while Ben Olsen will praise his side’s ability to be clinical with the chances they were given. Going forward, Inter Miami will certainly be a team to look out for regarding their unique five at the back formation.