Pierre-Emerick Aubameyang became Arsenal’s most expensive signing in 2018 as his transfer fee was €63.75m. The Gabonese international was able to maintain his prolific goal-scoring record in London, as he did at Borussia Dortmund. In Germany, he scored 0.77 goals per 90 minutes; being a Gunner, this figure dropped slightly but it is still very high – 0.70. However, despite all of his 61 goals, Arsenal are still yet to win a trophy.

Unai Emery was sacked in December. Arsenal had their former player, also the academy product from Barcelona, Mikel Arteta become the new manager of the team. Under Arteta, Aubameyang had a very different role. The Premier League golden boot of last campaign was no longer the centre-forward of the team, but the Gabonese still managed to keep his standard in his new role. So far, he already scored seven in 10 games as a left-winger.

In this tactical analysis scout report, we will show you the traits and role of Aubameyang. It is an analysis that focuses on how Arteta’s tactics maximised the player’s strengths.

In the first part of the analysis, we summarised the statistics of Aubameyang under Emery and Arteta to give you a brief impression of his performances. Offensively, the former Dortmund forward was less threatening under the new manager and it was reflected by the statistics. The xG/90 dropped from 0.40 to 0.33, and the xA also dropped from 0.1 to 0.05.

The below bar chart shows the offensive events/90 of Aubameyang under both managers. His touches in the box increased from 3.92 to 4.87; shots reduced from 2.70 to 2.02. Another increased category was his crossing, which jumped from 3.07 to 3.31

From the change of the stats recorded, we can understand the change of Aubameyang’ role affected his offensive performances. Having fewer shots but more touches in the box could be attributed to the change of that playing style.  And, an increase of crosses hinted the Gabonese was not in the central zones often. So, the question is, how did Aubameyang participate in the attacks?

Before we explain the game examples and his tactical roles in details, we tried to provide you with an update on Aubameyang’s traits. The new captain of Arsenal is 30-year-old already, and merely relying on pace for everything was not feasible to keep the performance at a high level. Since his pace is limited, Aubameyang had to sprint at the right moment to make his accelerations valuable.

In this example, you can see Ainsley Maitland-Niles had the space to cross on the right flank and this was the right time for Aubameyang to sprint. Playing a left-winger allowed the Gabonese to stay away from the centre-backs, hence, he could attack the half-spaces. Aubameyang was running on an average speed initially. When he realised there was a potential chance, he suddenly accelerated and left Aaron Wan-Bissaka behind him in this short distance race.

When facing a defender in 1 v 1 situations, Aubameyang only dribbles when there is plenty of space in front of him. He is also comfortable to use his left foot to cross or shoot.

In this scenario, you could tell from the defender’s body orientation that he let Aubameyang drift forward instead of cutting inside. So, the Arsenal no.14 just outpaced the defender and utilised the space ahead of him to test the keeper with his left foot.

Another key movement of Aubameyang are his blindside runs. This helps him move into goalscoring positions without a marker tracking him. Again, the timings and the moments are important. Playing as a left-winger allowed him to stay behind the widest defender, hence, staying on every defenders’ blindside.

For example, you could see Martin Kelly spared a second to look at the ball on Arsenal’s right flank. This is the second and moment for Aubameyang to attack the highlighted area. The benefits of staying in this area were twofold. First, if the cross reached the far post, Aubameyang was free to tap-in. Second, in case there were any events that led to an unsuccessful save from the keeper, the ball could possibly go to this area.

Allowing Aubameyang to play as a left-winger also allowed him to get rid of the marker. The Gabonese had the freedom to roam his position. Furthermore, he could stay centrally, and, between the lines.

In this example, you could see Aubameyang was lurking around zone 14. He was free, and he had the freedom the choose his run. When he understood Nicolas Pépé was going to cross, he capitalised on the positioning of another teammate, Eddie Nketiah, and ran to the centre-back’s far side. Temporarily, these two overloaded Federico Fernández. 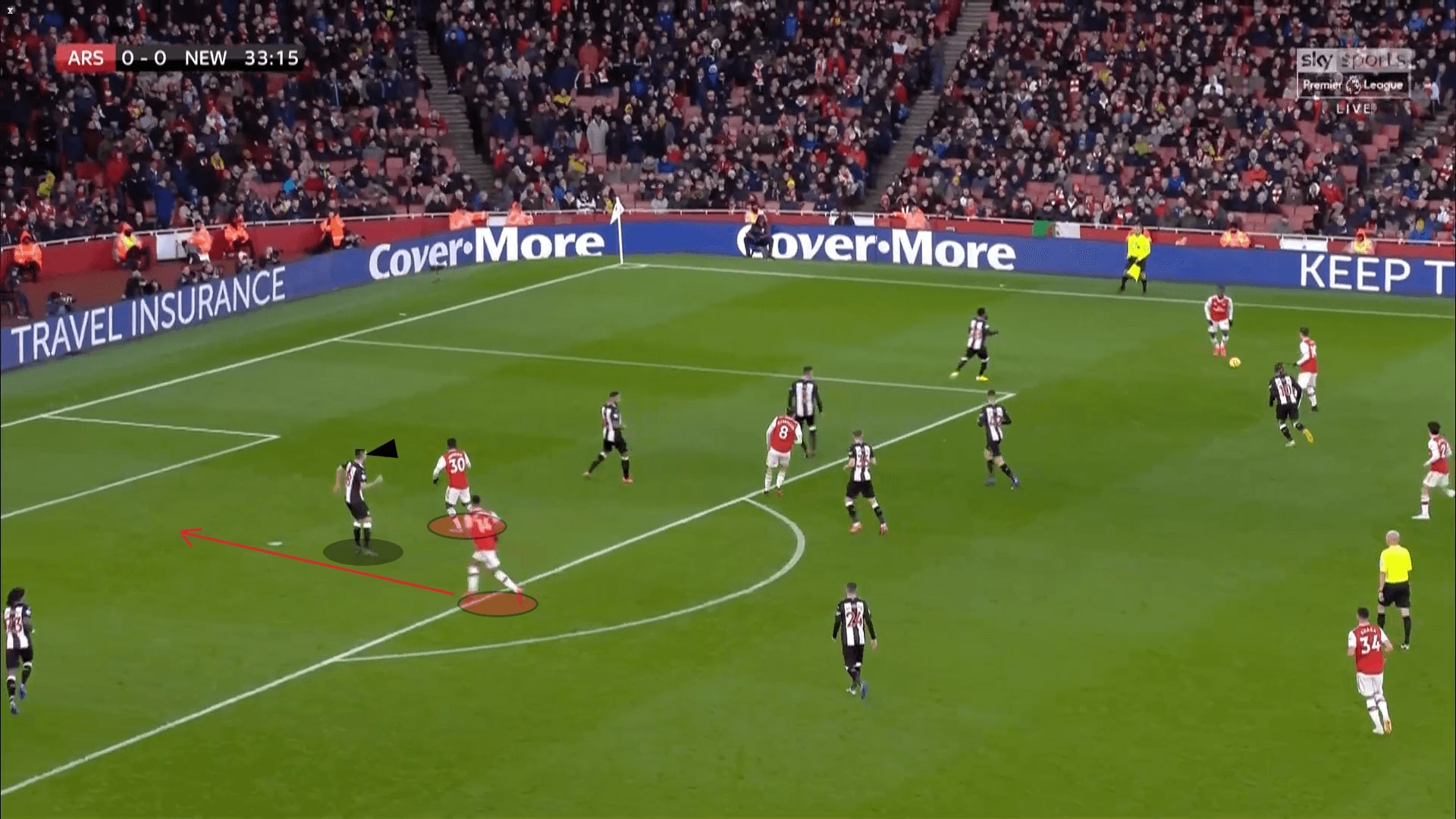 Similar scenarios also happened when Aubameyang was playing as the right-winger. He started on the right flank against Olympiacos. In the following image, you could see the left-back was looking at the ball, and he had Alexandre Lacazette around him. In this case, Aubameyang had the space to receive the cross and shoot, as he had been staying on the left-back’s blindside for a while.

Tactically, playing Aubameyang as the left-winger was also a decision that benefitted other teammates, especially the left-back. The Gabonese was inverted to the half-spaces and he occupied the right-back on most occasions, hence, he created room for the left-back.

Under Arteta, Arsenal’s centre-backs would use the long balls to progress the attack to the final third. The positioning of Aubameyang helped the Gunners to execute these types of progressions.

In this situation, Aubameyang manipulated Kelly to stay narrow with his inverted position. This opened the wide channel for the left-back, Sead Kolašinac. At that moment, they created a temporary 2 v 1 situation against the right-back. Therefore, when Kelly went wide to approach Kolašinac, Aubameyang could quickly run behind the right-back.

Below is another example, and it’s slightly different from the previous one as the Gunners were closer to the goal. In those cases, Aubameyang continued to occupy the half-spaces, also providing himself as a vertical option. Therefore, the ball carrier had multiple passing options as Aubameyang opened the wide channel for Bukayo Saka.

In this case, Granit Xhaka found the left-back. When the defenders switched their attentions to the flank, Aubuameyang grabbed the moment to attack the box, looking to meet the cross.

Inverting Aubameyang also allowed Arsenal to penetrate the centre. Since Lacazette liked to leave his position and drop, on occasions, he dragged the centre-back out too. This also benefitted Aubameyang, as he could utilise the gaps between defenders quickly.

This approach created a goal at Selhurst Park. Lacazette dropped and took the centre-back out, and this was the moment in which Aubameyang ran behind the defenders. Then, he quickly received the pass from the Frenchman and scored the goal.

Cooperation with the left-back

In this section, we’ll try to give you a clearer outlook on the partnership between Aubameyang and the left-back. When Aubameyang stayed wide, the left-back occupied the half-spaces. Aside from the Olympiacos goal, the below scenario also demonstrated this approach.

Aubameyang’s wide positioning took the right-back with him, created space between the right-back and right-centre-back. Kolašinac realised it was a chance to move to the byline and cross. In this case, Aubameyang quickly adjusted his body orientation with a touch and released the Bosnian.

Capitalising on the left-back’s offensive threat, Aubameyang could also attack the box cleverly. This was an example showing the ability of Aubameyang to read the game.

Saka was charging down the left flank and West Ham defenders had to react. Again, the Gabonese stayed centrally early. He also anticipated that the right centre-back, Issa Diop, will move wider in case the right-back could not stop Saka. Therefore, all Aubameyang had to do was to run in the opposite direction, getting to the centre of the box.

In the last section of this analysis, we will also show you the defending tactics of Aubameyang. The captain leads by example, committing himself to defend when his team set a low block. Therefore, this explains the increased defensive stats recorded under Arteta.

In the first example, Aubameyang covered the wide areas for his team. In this scenario, Arsenal defenders stayed narrow to contain three Chelsea players, hence, leaving the flank without protection. Kurt Zouma and Willian read those spaces and tried to progress the ball on the right flank. However, Aubameyang also recognised the flank needed to be covered, and tracked Willian’s run, denying the progression of Chelsea’s attack.

The last example we’ll show is a 2 v 2 defensive action which involved Aubameyang. Wan-Bissaka took a touch to progress the ball for a cross. Saka could not follow him as Anthony Martial was around and if he left his position, the half-space would remain open for the Frenchman. Therefore, in this case, it fell to Aubameyang to approach Wan-Bissaka and force him to cross under pressure.

Despite the change of position, Aubameyang is still a very important player to Arsenal. Offensively, his touch in front of goal, movement and positioning are exceptional as he scored seven goals from a 3.61 xG under Arteta. Playing as a left-winger allowed Aubameyang to get rid of the marker and become a movable target in the penalty box. Off the ball, the Gabonese also showed a great attitude to defend. He already scored 17 goals in the Premier League this season and we will see if he can win the golden boot again.