Eintracht Frankfurt fans could be forgiven for being somewhat disappointed with the signing of Bas Dost. After losing their two star forwards, Luka Jović and Sebastien Haller, for a combined fee of £99 million, Frankfurt were reluctant to splash their cash. Head Coach Adi Hütter seemed satisfied with both Gonçalo Paciência and Dejan Joveljić as his goal-scoring options. Despite both having immense promise, it was a big burden to ask the two young forwards to replace Jović and Haller and Frankfurt scored a goal apiece in their first two Bundesliga games, registering a win and a loss. Yet there had been rumours throughout the summer linking them with Dutch target-man Dost. They moved relatively late in the transfer window and signed him for £6.3 million. This tactical analysis and scout report will look at how Dost will fit into the tactics employed by Hütter, and highlight his unique abilities as a forward.

Dost is familiar with the Bundesliga, having scored a respectable 36 goals in 85 appearances for Wolfsburg. In fact, he has scored goals freely wherever he’s played, scoring an incredibly impressive 93 goals in 127 appearances for Sporting in Portugal.

So far in his professional club career, Dost has scored 181 goals in 320 games, and he started off his Frankfurt career scoring on his debut in a 2-1 win over Fortuna Düsseldorf. He has made 18 appearances for the Netherlands but has only scored once in 18 games.

At 30 years old Dost is a player who is likely coming to the end of his prime years, and that is a stark contrast compared to the two forwards who left Frankfurt this summer. Both Jović and Haller were signed as young strikers with plenty of potential for big future transfer fees.

Despite this, Dost is a clever forward with an excellent track record and is a low-risk signing for the German side.

Sporting predominantly played a 4-2-3-1 or a 4-3-3 last season, and Dost was used as the focal point, playing as a centre-forward. He may not play this way for Frankfurt, who have played with two strikers in all three of their Bundesliga games thus far this season. Last season Frankfurt predominantly used a front two as well, but with Ante Rebić leaving for AC Milan, and André Silva moving the other way, it’s not clear if Hütter will use a front two or three.

Dost could form a good partnership with Paciência, who likes to drop deep, or wide to receive the ball. However, he has shown he is a handful for defences when playing without a partner.

He is a forward who plays very far up the pitch, and very centrally. He rarely drops in to contribute to build-up play and is more concerned about being in the right areas to poach from. Paciência is a very different striker and his desire to drop into deeper positions would act as an excellent link between the midfield and Dost. Although Dost can play by himself, Paciência has always been used alongside another forward.

We can see Dost’s high positioning by looking at his heat map from last season. It shows just how forward he plays and how oriented he is towards the 18-yard-box. 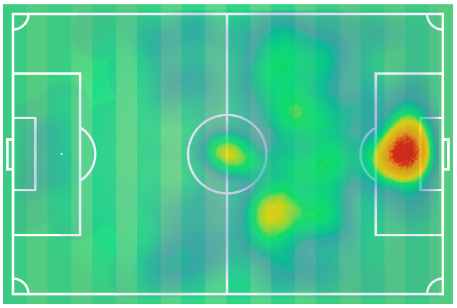 It’s very rare to see a centre-forward who plays so high up and whose positioning is so predominantly inside the 18-yard-box.

As mentioned earlier, Dost has an incredibly impressive goalscoring record, and he is lethal from inside the box. A glance at his shooting map from last season shows that he takes almost all of his shots from inside the 18-yard-box.

These are areas with a much higher probability of scoring from, and this shows as he had the second-highest xG in the league last season with 14.86. He was true to form and scored 15 goals in the league.

This left him tied for fourth in the scorers’ chart, alongside João Félix, Francisco Soares, and Dyego Souza. Yet Dost took fewer shots on average per 90 minutes than any of these players.

However, 10 of his 23 goals in all competitions came from the penalty spot. For Sporting last season he scored a goal every 113.13 minutes. If we look at only goals scored from open play, this rises significantly to every 200.15 minutes.

That’s still a respectable return, but the level of defending in the Bundesliga is superior to that of Liga Nos. He did get off the mark on his return to the Bundesliga though. Last weekend he scored in Frankfurt’s 2-1 win over Fortuna Düsseldorf. He occupied space between two defenders, before moving on the centre-back’s blindside and heading in at the front post. Both this movement, and his preference for heading are trademarks of Dost, and we will discuss these in more detail. 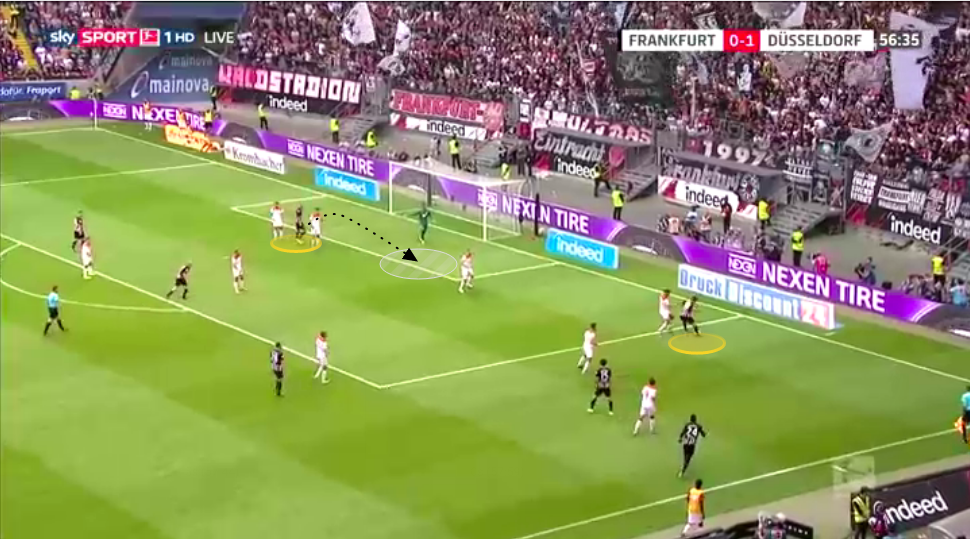 At 1.96m tall, Dost is obviously a threat aerially. Last season he took the third-highest amount of shots in the league with his head too. He also won 48% of his aerial duels.

Although he is dangerous in the air, he is not prolific with just 4 of his 23 goals last season coming from his head.

He is unsurprisingly aerially potent when not marked tightly. This can be a mixture of poor defending but also his excellent movement. Sporting made an art of picking him out in these minuscule gaps. As mentioned earlier, Dost’s movement inside the box is excellent.

Firstly, Dost is always looking to play in between two defenders. He will initially look to be picked out whilst occupying this space. If he can be reached than he doesn’t need to use his movement. 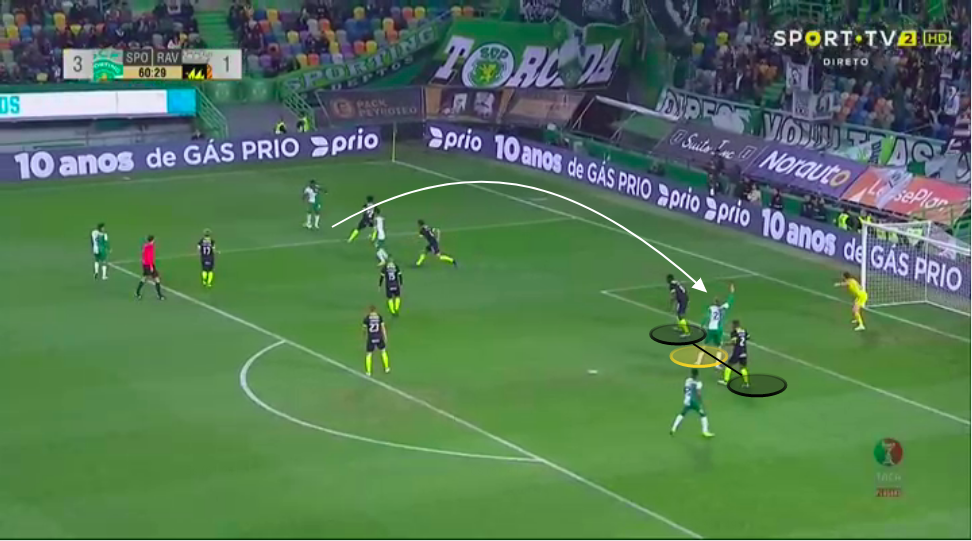 However, he often drops off of one centre-back to pull them away from their partner enough, before attacking the space. By doing so, not only is he making himself hard to mark, but he is also creating his own space in what might be a crowded area. 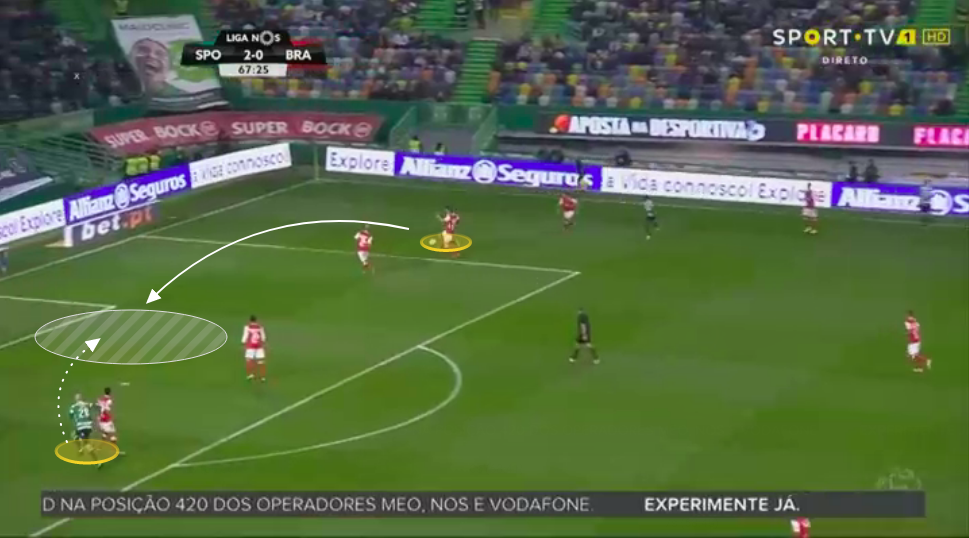 Regardless of which defender he plays on, Dost thrives on playing off of the defender’s blindside. For a forward with such a big frame, one of his biggest strengths is losing his marker inside the 18-yard-box. This is a key reason why he is able to get so many shots away from close range. His movement allows him to find enough space to be able to receive the ball. He is frequently able to get a shot away before a defender can close him down.

Dost reads crosses very well and his movement is smart and perhaps even unorthodox at times. He gambles on crosses and passes finding him through crowds in the box. That, or perhaps he is that good at reading these balls. 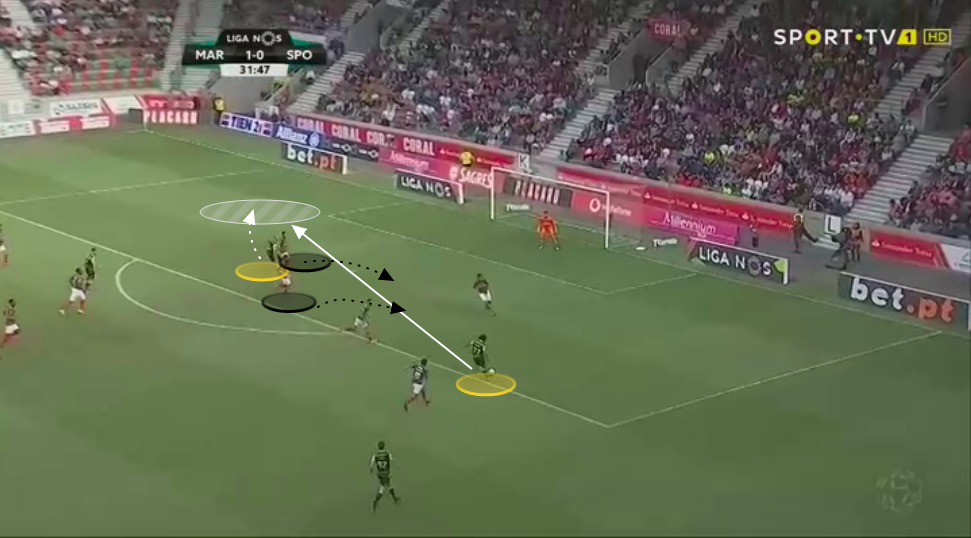 In the above example, the two defenders look to fill the space in the area that they expect Dost to attack. He even indicated this intention by beginning his run with conviction towards the front post. However, Dost instead changes direction and drifts to the back post. He moves into space, gambling that the ball will find a way through. In this case, it did, and he scores.

It will be an interesting season for Frankfurt, having lost all of their front three players this summer. Although Dost is hardly a blockbuster name, he is an experienced forward who has played at this level before and done well. He has gone away to Portugal, scored a lot of goals, and will no doubt be coming back as a better player.

At 30 years old he is a player who is ready to play now, and it will be interesting to see how Hütter utilises Dost, Silva and Paciência. Dost will be best served as part of a front two, or as the central-forward in part of a front three. However, Dost is arguably less of a target man and more of a poacher. He isn’t a forward that is going to drop deep and link-up with players. Dost is a forward that is going to occupy goal-scoring areas and will be a constant threat in the box.

He is a good signing and Frankfurt will hope he can contribute straight away this season.