Not many who follow Major League Soccer will have been quite as excited for the kick-off of the 2020 season as the fans of Seattle Sounders. As the 2019 MLS Cup Champions kicked off the new season with a home opener against Chicago Fire, fans will have high expectations of another successful season. With a rallying crowd backing the home side, Seattle were able to come back from a goal down to win the game 2-1 in stoppage time.

During this tactical analysis, we will dive into how impactful each team ultimately was in front of goal. Additionally, the tactics employed by Raphaël Wicky and Brian Schmetzer made for interesting match analysis.

As the travelling side, Raphaël Wicky organized Chicago in a traditional 4-3-3 formation. Brian Schmetzer, on the other hand, organized Seattle with an interesting spin on a 4-2-3-1 formation as Miguel Ibarra and Cristian Roldan played in a narrow front three alongside Raúl Ruidíaz. With the tactical flexibility to run in behind, or drop off the front line, Ibarra and Roldan created some real tactical problems for Chicago to deal with.

What the match report for this MLS fixture will tell us, is that Seattle managed 15 shots in total, with five on target. Chicago, on the other hand, managed 13 shots with four on target. So for the most part, we may be inclined to look at the game as being one that was relatively even in front of goal and that a narrow win for Seattle seemed reasonable. While the match stats illustrate an almost even split of shots, the location and xG value of each shot tells a very different story. Seattle managed to sum up a combined xG of 3.14, while Chicago’s was 1.12.

In adding a little more context to the opportunities created for each side, the subsequent two images first illustrate Chicago’s location and shot values, while the second image provides context on Seattle.

What’s notable in analyzing Chicago’s efforts at goal is that there is almost an even split between shots inside and outside of the box. When looking at the xG value of each shot, with exception to two shots in close location to one another, all others were taken with low probability of scoring.

When looking at Seattle’s xG shot location, one of the most notable observations is firstly how many shots are taken close to Chicago’s goal. When looking at the shot values, Seattle were able to create multiple opportunities with high xG values. It might even be debated that on another day, Seattle could have put the ball in the back of the net at least four of five times.

As the travelling side, Chicago’s tactical organization was very expansive in possession (almost reminiscent of a 2011-12 Barcelona side) as they looked to provide width and depth quickly in order to open up space. At times when Chicago did choose to build out from the back, the full-backs, Jonathan Bornstein and Brandt Bronico offered positions high up the pitch which created a challenge for Seattle to deal with. In the image below, notice how Bornstein and Bronico have positioned themselves behind the line of pressure from Seattle’s wide forwards, Ibarra and Roldan. This higher starting position would allow them to break the line of pressure and potentially take four Seattle players out of the game if the ball was played into them early enough.

In this next image, it can be seen again that Chicago’s full-backs offer plenty of width in the attack which challenges Seattle in how they deal with the space and potentially being stretched. In addition, it can also be seen that Chicago’s midfield three held a very centralized shape which allowed them not to be countered very easily. 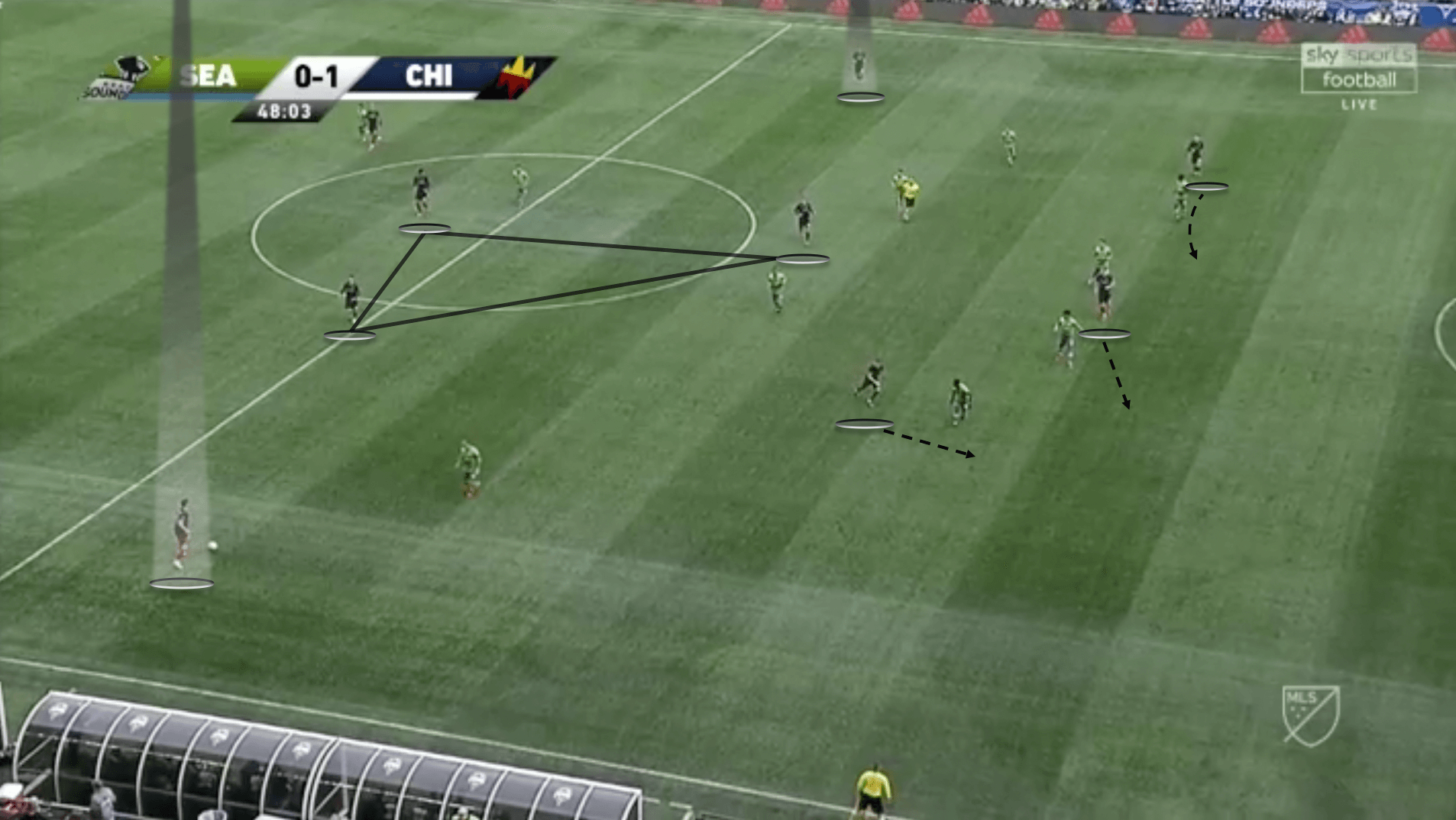 Without the ball, Raphaël Wicky’s tactics were to have wide forwards Djordje Mihailovic and Przemyslaw Frankowski drop off the front line and create a five-man midfield. This made Chicago difficult to break down at times as they were able to cover the width of the field and prevent penetrating passes through their lines. A challenge for Chicago came when transition occurred. With an expansive team shape in possession of the ball, the distances that need to be covered in order to get back into a balanced and compact defensive shape are a constant race against time (hinging on how quickly the opponent attacks and if any teammate is able to delay the attack).

The role of the wide forwards in Brian Schmetzer’s Seattle side were incredibly interesting to observe and created all kinds of problems for Chicago to deal with. While the image below shows their positioning being predominantly behind Ruidíaz, the three operated with a synergy that could see any of them offering short for the ball, with the others running behind.

Tying up the backline

In the following two images, Ruidíaz has dropped off the front line in order to collect the ball. While supporting the attack, Ruidíaz is also able to help Seattle create a numerical advantage in the middle of the pitch (4v3). Further up the field, Ibarra and Roldan are positioned between the centre-back and full-back on either side of the pitch. This means Seattle are able to tie up four players with only two of their own, meaning they can create numbers up situations elsewhere. To draw reference, Liverpool often utilize similar tactics in which Roberto Firmino drops off the front line and brings others into the game.

Again, Ruidíaz drops off the front with no Chicago player attempting to follow his movement. Had Chicago’s centre-backs decided to track his movement, a larger gap would have appeared within their defensive structure with Ibarra and Roldan ready to exploit the space vacated.

Flooding the centre of the pitch

With the positioning of the front three being very narrow, many overload situations were able to occur as Seattle looked to overwhelm Chicago in the centre of the pitch. In an attempt to counter the densely populated central areas, Chicago brought their wingers further inside. The problem Chicago then faced, was that Seattle’s full-backs were an outlet and able to dominate the channels.

Exploiting the 6 and playing in the half-spaces

Part of the reason Seattle were successful in the game is tied to the previous points around the positioning of the front three and creating overloads. As Ruidíaz was willing and capable of dropping off the front, so were Ibarra and Roldan. As their positioning was between the full-backs and centre-backs, this meant when dropping into the half-spaces they often appeared on the blindside of Mauricio Pineda who played in the number six role for Chicago. With players appearing on either side of him, Pineda has a tough time dealing with them alone.

The below image illustrates how Seattle attempted to dominate the half-spaces. The question for Chicago was to deal with the problem through Pineda alone, or have a centre-back track the movement which could be costly if there were runners ready to threaten the backline.

In the following two images, it can be seen how Seattle created problems between the lines of Chicago’s midfield and back four. With the addition of Jordan Morris in the second half, Seattle’s left-side of attack now also had the ability to pose problems for Chicago inside and in the channel.

This time utilizing Roldan, Seattle recognize space and look to quickly switch the ball to the opposite side. What cannot be seen is Kelvin Leerdam who is just out of shot at the bottom of the screen. The right-back for Seattle had a large influence in attacking lines throughout the game and in this situation, poses a problem for Chicago’s left-back Jonathan Bornstein. Should Bornstein track Roldan, then Leerdam could be used as the outlet. Having high full-backs and players occupying the half-spaces allowed Seattle to quickly create overloads in wide areas.

A clear trend for Seattle in the game was to always have multiple players ahead of the ball and different options to get in-behind the Chicago backline. It was refreshing to analyze the tactics that Brian Schmetzer employed as there is clearly a risk associated with these tactics. Looking at this final image below, should João Paulo lose possession of the ball, Seattle might face a situation of potentially five players being ‘packed’, meaning they’re essentially out of the game for a brief moment in time. The positive aspect of the below image is that Seattle firstly have created positional superiority with players between the lines. Additionally, an overload has been created on the far side of the pitch which Seattle ultimately exploit. This leads to the equalizing goal.

Chicago started the game in a very positive manner with many of the match statistics being favourable for the away side during the opening 20 minutes of the match. Had it not been for two marginal offside calls chalking off two otherwise well-developed goals in the opening 35 minutes of the match, Chicago could have been 2-0 up. As the match progressed, Chicago faded in energy and the most notable challenge being how they dealt with Seattle’s inverted wingers that played between the lines.

For Seattle, the tactics they employed placed a large value on creating overloads and creating problems in the half-space both in-front and behind the defensive line of Chicago. When the home team were able to get in-between the lines on the ball, good opportunities to score were created and the home side ultimately deserved the match-winner in the dying stages of the game.

Both teams will take positives from their respective performances and will look to build on their shortfalls when the season commences again.

31-year-old coach educator with a love for analysis. Originally from the U.K (Newcastle) but reside in the USA (NJ). Enjoys watching strong philosophies in the game and a big believer in team culture.